Yet Another Adventure – A BI (AUS) Takes On Navy (US)

After a time it was no longer the Swinging 60s, and one day I found myself as the Boarding Inspector – the BI. In charge of the BOs – the Boarding Officers. Naturally I found the job very enjoyable.

I will always remember the maiden visit of QE 2 to Fremantle. I was now the one invited to lunch on board, and at the end of the day before sailing they said: ‘Inspector, why don’t you invite your wife down. It is lovely up at the Lookout Deck bar with the sun setting and you can enjoy a few drinks on us with her before we sail’. It put me in her good books at home for some time. 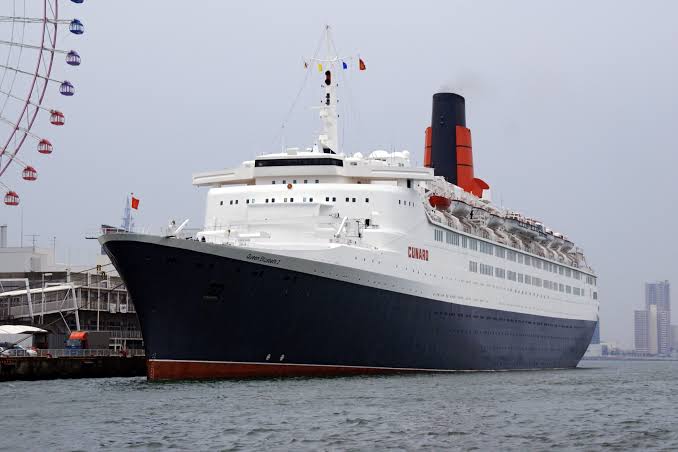 There was also the time I received an invitation from the Royal Australian Navy to attend, with partner, a cocktail party onboard HMAS Ovens. Devoted Ship-ee’s will know Ovens is a submarine. I thought, ‘Robyn is seven months pregnant she won’t be able to get across to the sub on a narrow gangplank off the wharf and then climb down a ladder through the conning tower’. Well, wrong again! If ever you get invited to a cocktail party on a submarine, say yes. It is a great night out! 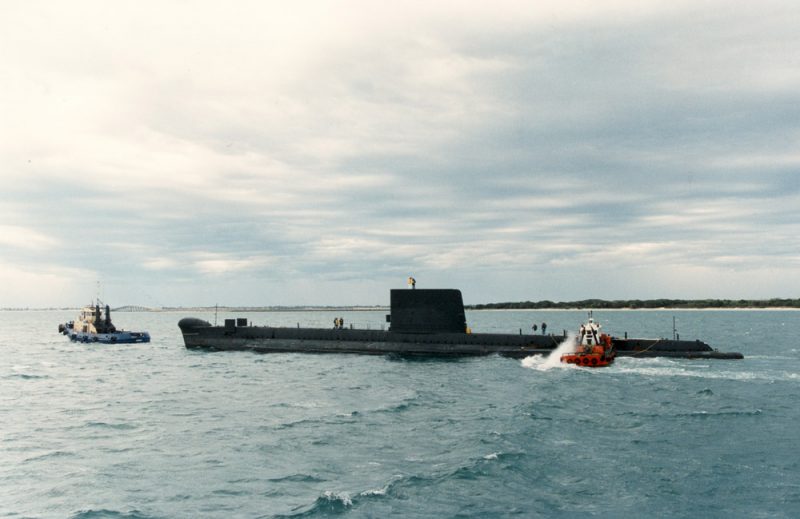 It was also a time when the American Navy fleets were visiting Fremantle on R & R visits. A ginormous carrier, 5000 crew surrounded by a fleet of support vessels. The carrier, too big to enter port, had to anchor in the roads and the other ships came into port.

Navy ships were generally treated very softly. There was a Status of Forces Agreement in place anyway. But what we did do, emanating from days of long ago, was to go on board on arrival and present the Captain with a letter explaining what could be brought ashore and what could not. That is, twenty cigarettes, open bottle of booze, and certainly no foodstuffs whatsoever.

Don’t laugh, in Geraldton whilst I was there, they wanted to have a BBQ picnic ashore with all their steaks etc. Took quite a bit of persuasion to talk them out of it.

Presenting a letter to a carrier captain was, well, ambitious. We had to go out on the ferry after arrival and when I sent one of our bright young men, he came back very, very disillusioned.

‘When I sailed out to it there were thousands coming ashore on the ferries and when I got on board nobody wanted to know me’.

This was a problem for the Boarding Inspector. I rang the US Navy Liaison Officer.

‘Listen, Chuck, we have a problem and its too late to solve it this time but how can we tackle it in the future?’.

Fleet visits were on the cards in the future.

Well, to Chuck this wasn’t a problem.

‘No worries Michael. What we will do is fly you out on board the day before arrival and you can cut a tape on our TV channel which we will play for all the crew to see up until arrival’.

‘Well of course Chuck, how the hell did I not think of that!’. 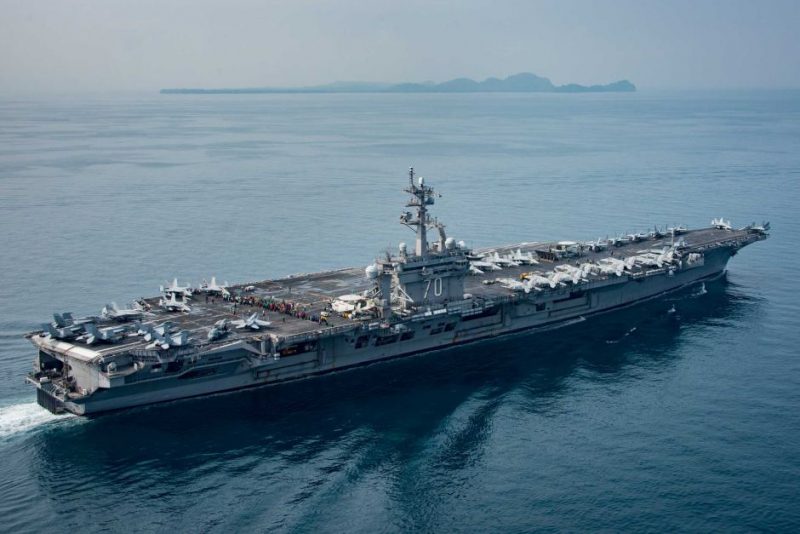 Eventually, we were advised of the arrival of the Carl Vinson with fleet and prepared to put plans in place. I said to my boss –

‘This is the first time we have done this so I want to go to make sure it works OK’.

Boss smiled knowingly and said ‘Sure!’

I spoke to Chuck and he advised the fleet was due up Friday, so we would fly out Thursday and do what we had to do.

So, out to Perth airport where I noticed a motley bunch of men who looked like bank clerks with me in the waiting area. Actually I think they had been waiting in the bar.

‘They are bank clerks with $1 million Aussie dollars in their bags. Going to run the exchange’.

We embarked on the waiting aircraft. Never knew the type but it was a twin turbo prop that carried about twenty passengers. Big exit ramp at the rear. No windows at all. And the passenger seats all faced the rear of the plane and in front of them, also facing the rear, were two seats for the loadmasters.

We flew for what seemed a longish time and then I noticed the telltale movement which indicated we were dropping in altitude. The arm of one of the loadmasters went up and his hand started to rotate. The engines started to make funny noises. Then he dropped his arm and ‘CRASH!’ we hit the deck.

Before I could recover from that I was pressed back into the seat and for a split second almost passed out. We had picked up the hook on the deck and from landing speed, of say 240 kph, stopped immediately. Amazing experience. 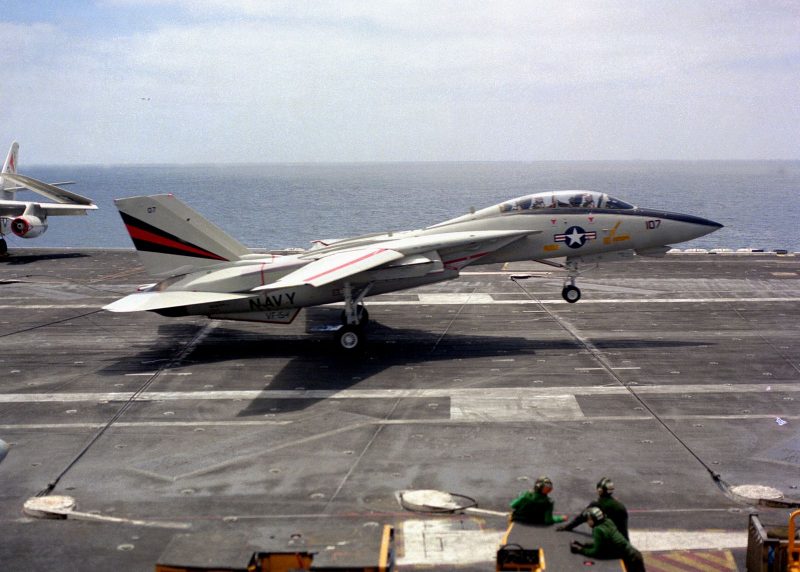 An F14A landing on the Carl Vinson – but not our author’s plane!

Plane lights went out and the back ramp started to drop, the wings were coming up and we were being parked. Walked off and noticed we were surrounded by sailors with shotguns. Loaded I presume. I thought someone could pinch the cash but where would they run to?

I was approached by an important looking officer who politely asked what I wanted. I told him and that I wanted to see the Captain, not forgetting to include I also wanted a bed for the night. He sent me off with a young sailor and I ended up, after much climbing of stairs, in the Executive Officers quarters. It sure looked a serious place.

Well, it was the nerve centre of a floating arsenal with 5000 men on board! I explained to him what I wanted and then another long walk to the TV studios. After a few false starts, ‘Good evening my name is Michael Metcalf and I am from the Australian Customs blah blah blah … I managed a tape which they said was ‘very good’. I am sure they say that to everyone.

They must have thought it was OK. Every time I looked at a TV (and there were plenty on board) I saw my earnest figure telling the sailors the rules for Australia.

Although things went smoothly on board I kept thinking, ‘How does this thing function?’. 5000 men on board. Is there any one person who knows what is going on? You just have to look on it as a floating city.

They found me a bed. It belonged to one of the advance party who had gone ashore and was in a room (didn’t call them cabins) with two other officers. I did not sleep soundly. The ship rattled and shook and the phone kept ringing for the other two, even though they were supposed to be sleeping.

After my TV tape I was given a tour of the ship. I was taken up to the bridge but then was told, ‘Sorry, it is shift changeover and we can’t go in’. There must have been about twenty sailors waiting in a blackened room to swap places with those on the bridge. 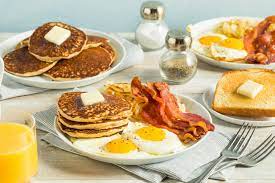 Next morning I had an American breakfast, I suspect the best meal of the day. Then thought I will join the masses going ashore in the ferries. Turned out, not necessary.

‘There is a helicopter waiting Sir, we will put you on it’.

Wonderful. Landed on Leeuwin Barracks oval in East Freo, by the river. Then back to the office to report operation was a success.

Like many other stories, I dined out on this one for some time to come.

This article by Michael Metcalf

In case you missed Michael Metcalf’s earlier instalments, here they are again – Adventures of a Boarding Officer in the Swinging Sixties; More Adventures…; Even More Adventures … and; A woman on the wharf