As well as being a Customs BO – a Boarding Officer – sometimes I was a wharf EO – a wharf examining officer at the Port of Fremantle.

My job was to physically examine cargo on the wharf to ensure it was what the importer told us it was when they paid the duty on it at Customs House.

Ships discharged their cargo into sheds on the wharves. Victoria Quay had sheds A to H. 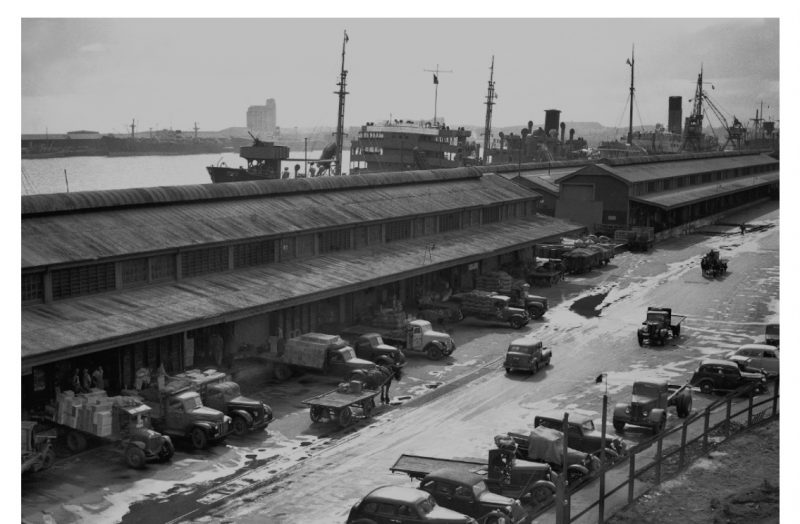 Credit: Fremantle Ports
A little before the author’s time, but not that much!

Nearly all the sheds had offices for Port Authority staff in the middle of the shed and Customs staff at the end.

If they contained underbond cargo they were subject to the ‘Crown Lock’. This door locking arrangement was such that nobody could get into the shed until Customs had unlocked the Crown padlock on the shed access door, and when the Crown Lock was in operation the Customs office had to be staffed.

If the shed was working night shift or weekends it was a very handy source of overtime for those of us on the roster.

No cargo was worked from noon to 11 pm Saturday. We were told this was so all wharfies could go to the football.

Before containerisation, a ship sailed into Fremantle harbour, tied up alongside a cargo shed and discharged its cargo into the shed, and then trucks came along and took it away.

Was this all there was to it?

No. Of course not.

This was Australia, and there were lots of rules – you may have guessed this already!

Ownership of the cargo was determined by possession of the ‘Bill of Lading’. This document described the goods by their marks and numbers. The goods were cleared through Customs at the Customs House but sometimes there was a query. Or more information about the goods was required to do the clearance. So, the stuff had to be physically examined.

The example I love was chests of tea from India. They came in in their thousands. Everybody drank tea before coffee became fashionable. For some reason the amount of tea shown on the invoices was far in excess of what was in the chests (!). Duty was threepence per pound in the pre-decimal days. The importers, Bushells and others, wanted the tea ‘checkweighed under Customs supervision’. Two or three hundred chests of tea on and off the platform scales two or three at a time in a cold, windy shed on a July morning (and afternoon). The Broker and I kept tally and the figure we ended up with was what was paid duty on. The coopers, who did all the grunt work, were paid so much a chest and did quite well out of these jobs.

A set number of imports were physically examined by Customs wharf examining officers on a random basis to ensure the contents were as described by the invoices. This was supposed to discourage collusion between importer and exporter who often knew each other and were even friends.

I remember one Italian exporter, who being Italian, thought he would surprise his friend the importer with an innocuous gift. It was discovered through routine examinations. Well, we didn’t want them to get ideas so, from then on, every one of his importations was examined. And, even if no penalty, there was a cost associated with all this.

Often large packing cases of immigrant’s household effects arrived and they were subject to examination. I always felt sorry for those families who did the clearance themselves.

‘Sir, I would like the packing case opened please.’

‘I am sorry. We do not open packing cases. We only look after someone else opens!’

We could actually provide a hammer and large screwdriver!

Private cars also were imported. For whatever reason. Secondhand Jaguars were dirt cheap in England and were popular imports for awhile. As-new secondhand Japanese cars also fell into this category. When the London to Sydney marathon cars arrived, we had a shipload to clear ASAP. The big issue with cars was the quarantine or health clearance. Every car was steam cleaned.

‘But we had them done in India!’

‘No, sorry, we might just do them again here!’

All cargo was tallied off the ships. When the cargo hit the wharf, Tally Clerks would take down description and quantity. This was checked against the cargo manifest. This document was considered ‘the Bible’ as to what was on the ship because it was a copy of all the Bills of Lading. However, shortages or surpluses occurred and these were recorded after discharge on what was quaintly called a ‘Jerque Note’.

With the arrival of the ‘Encounter Bay’ in 1969 containerisation started in earnest. The wharf became merely a transit area. Although some containers were unpacked on the wharf most went straight through to the warehouses out at Kewdale, or direct to importers’ premises. If we wanted to look into the container for whatever reason we placed a customs seal on the doors and looked at it at its destination. 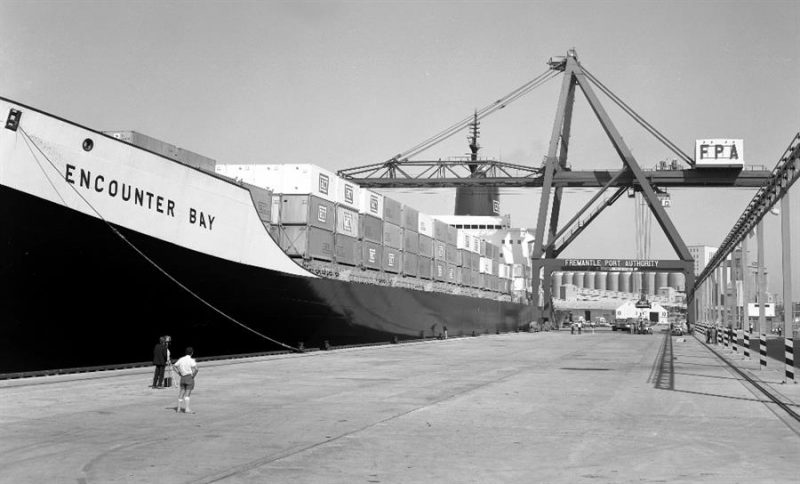 Finally, when the Customs, the FPA – Fremantle Port Authority, the Quarantine people, and probably others were all satisfied, the truckie could rock up with his piece of paper to collect his consignment. His truck was loaded by the wharfies and he could depart. But there was one other thing. The Gatecheck.

At every exit during hours of cargo delivery the gate was manned by conscientious FPA staff. And woe betide any truckie who did not stack his truck in such a way that it could be tallied by the gatestaff.

I very much enjoyed being a ‘Wharf EO’. Wife Robyn also worked there.

When riding our bikes along Victoria Quay with grandson Quinlan, notwithstanding his eyes rolling to the heavens, I love stopping and saying to him –
‘Did I ever tell you about when Granny and Granddad worked on the wharf?’.

In case you missed Michael Metcalf’s earlier instalments, here they are again – Adventures of a Boarding Officer in the Swinging Sixties and More Adventures…