The Top 20 – Famous ships to have graced our port

Fremantle Shipping News put a challenge to Neil Stanbury, Corporate and Community Relations Manager at Fremantle Ports, to come up with a ‘Top 20’ list of ships that have visited our port over the years.

Neil and his colleagues thought hard about it, then decided to have a go.

The words with the photographs that follow make for a compelling, hard to put down story.

No doubt our readers will have other favourites. Don’t hesitate to send them in!

In responding to the Shipping News’ challenge to produce a ‘Top 20’ list of ships that have graced the port of Fremantle ver the years, Neil Stanbury, Corporate and Community Relations Manager at Fremantle Ports observes:

“There’s no such thing as the definitive list, so we considered a range of ships for their history, fame, notoriety or glamour factor, as well as those that represented a ‘first’ of some kind. ‘There are many others that could easily have got a mention instead, but perhaps another day,” he said.

Of course, one Ship-ee’s list won’t fully match another’s, but there are some wonderful entries below. Check them out and compare with your own.

• 1850 – The 637-ton Scindian was the first ship to arrive at Fremantle with convicts, from Portsmouth. She had aboard 275 people including 75 male convicts and 163 military pensioners. George Throssel, the son of one of those pensioners and also aboard as a 10-year-old, later became WA’s second Premier. When the convicts touched Australian ground, their first campsite was at the harbour master’s store, where Fremantle’s Esplanade Hotel is now located. If you’d like to know more about the Scindian, look here.
• 1876 – Now this was a Hollywood-worthy epic – the escape of the Fenians aboard the whaler, Catalpa. An international plot to rescue them from Fremantle Gaol culminated in a horse and trap chase by troopers to Rockingham, where the six Fenians rowed a whaleboat out to the Catalpa and got caught in a bad storm. Then, the 90-foot bark was nearly blown out of the water by the Georgette before the Catalpa’s captain hoisted the US flag and claimed to be outside territorial waters and therefore ‘safe’. Yes, this did happen in the Port ofFremantle’s waters! 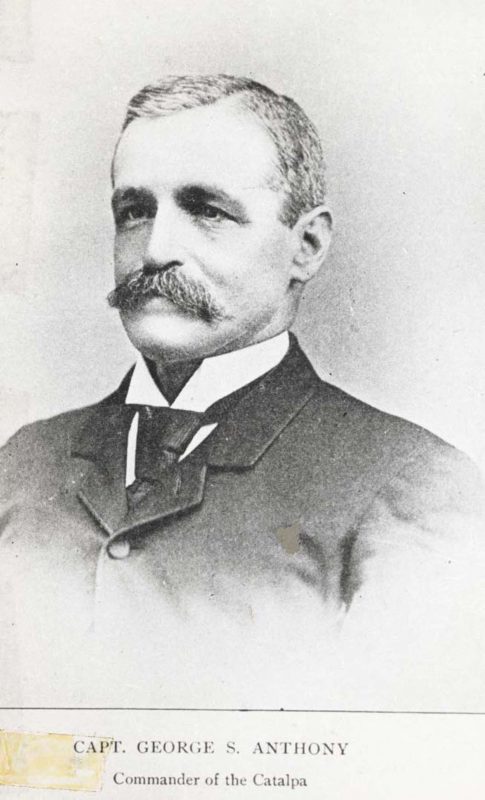 • 1897 – It was a glorious day when Blue Funnel Line’s SS Sultan entered port to officiate at the opening of the Inner Harbour, created by CY O’Connor. This occurred on May 4th that year. She glided into South Quay around B Berth, adorned with bunting. At the helm was Lady Forrest, wife of the Premier Sir John Forrest, while hundreds of spectators looked on.The port never looked back! 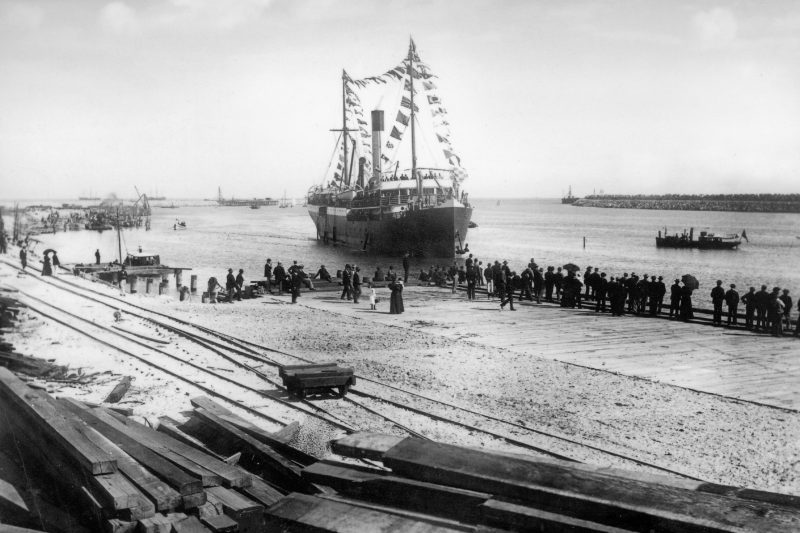 • 1900 – Sir John Forrest was adamant that the mail service relocate from Albany to Fremantle, and it was the 6,117-ton Orient liner SS Ormuz that was the first British mailboat to enter Fremantle Harbour. The elegant four-masted ship with a plumb stem was such a favourite of the Orient Line that it had an inscription above the first-class lounge that read: ‘Were the World a Ring of Gold, Ormuz would be its Diamond’. Built in 1886, the Ormuz was glamorous, with a beautiful fit-out in first-class and could do the Australia run in six weeks. She was a troop ship during World War II before being broken up in Marseilles in 1922. 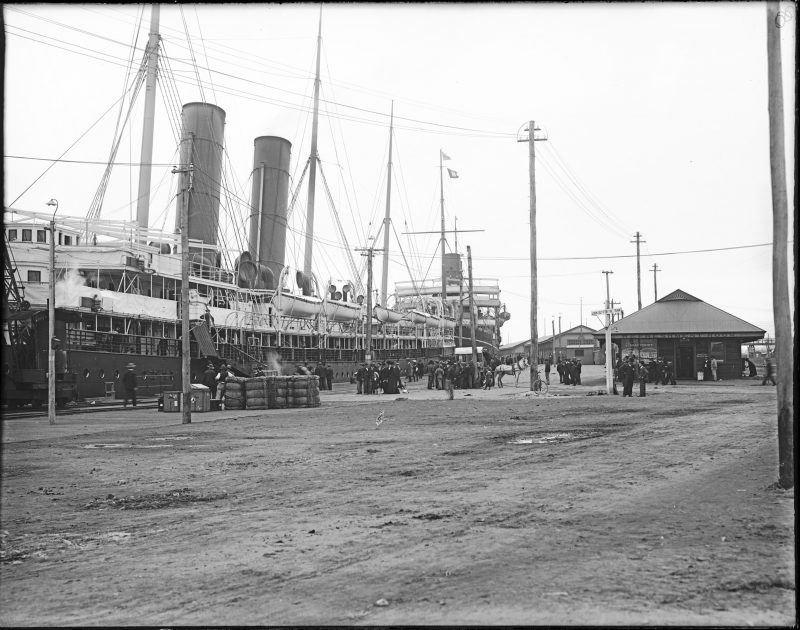 • 1912 – One of the great maritime tragedies of Western Australia was the disappearance of Adelaide Steamship Company’s SS Koombana in a cyclone off the coast near Port Hedland on 20 March 1912. The sinking led to the death of 150 passengers and crew. Some 26 days later, on 15 April 1912, the Titanic was lost in the North Atlantic.The 3,668-ton Koombana was considered very seaworthy and with an experienced captain, so the court of marine inquiry concluded ‘her fate passes beyond human knowledge and remains a mystery of the sea.’ 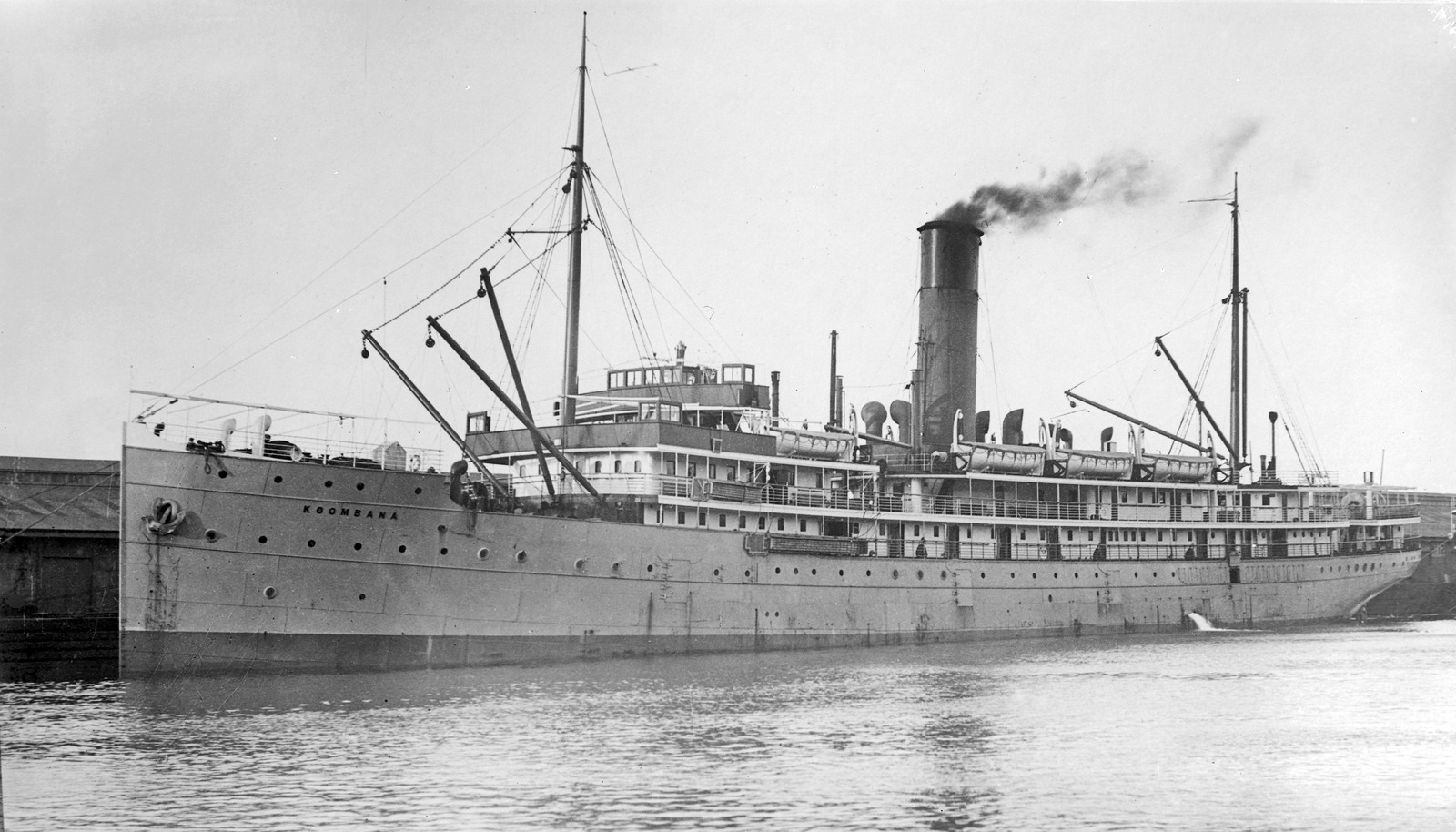 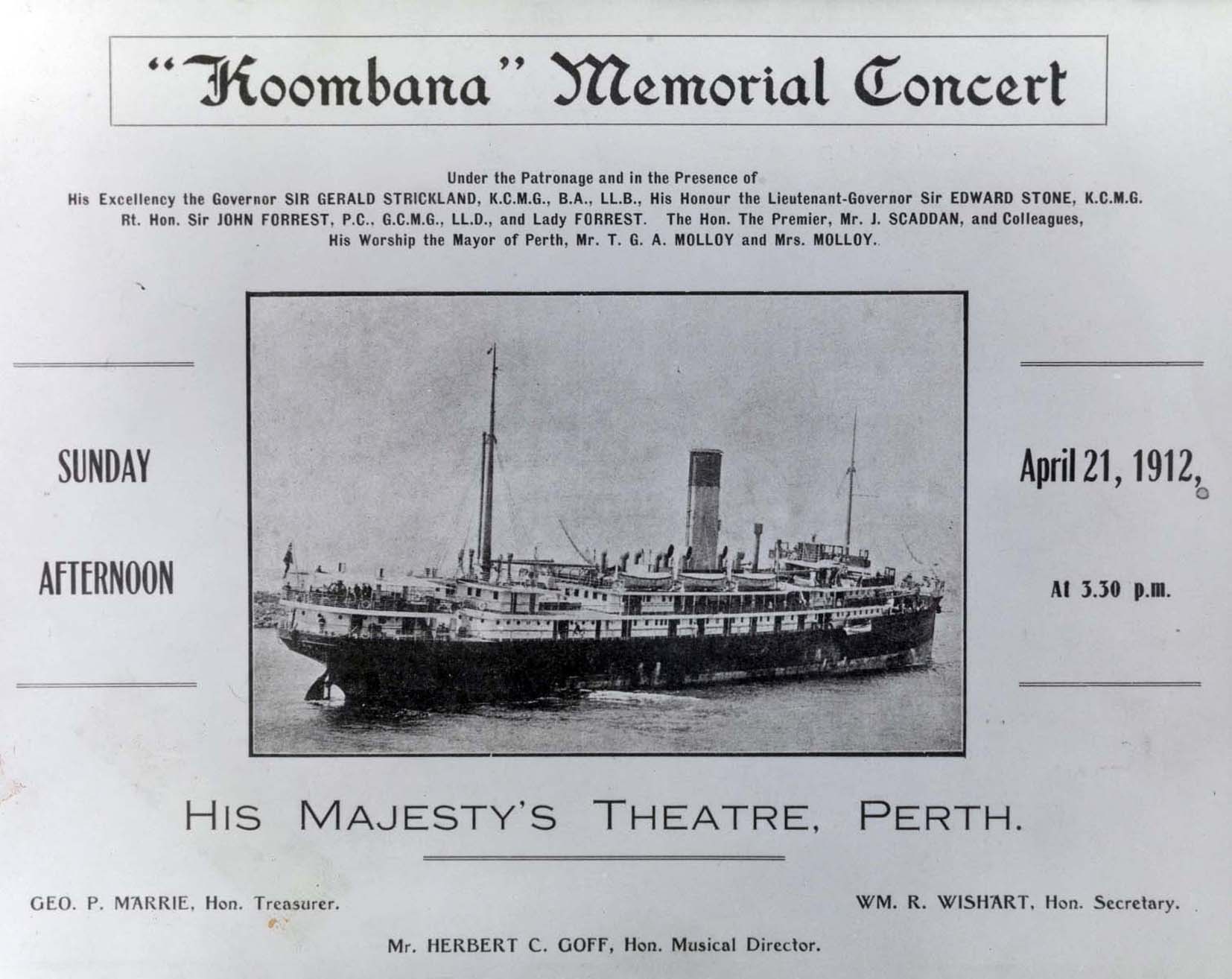 • 1918 – A ship carrying Australian soldiers returning from the Great War, the HMAT Boonah was unable to dock because of a fear of the flu causing an outbreak ashore. More than 300 of the 1200 troops onboard had contracted the “Spanish Flu”  The ship anchored off Woodman Point, with the sick transferred by Fremantle Harbour Trust tug Reliance to the nearby Woodman Point Quarantine Station. It was a sad story, because after surviving the war, 27 soldiers died, as well as four nurses. 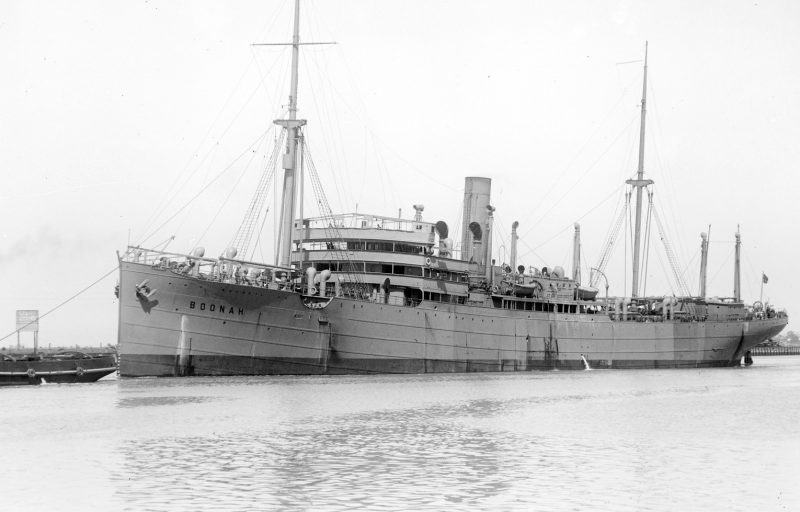 • 1927 – An illegal immigration sensation occurred at Fremantle in the 1920s when fifty Chinese men were found by customs officers in the ballast tanks of the Almkerk when she arrived in November 1927. The Mirror ran a screaming and racist headline: ‘World’s Record Haul of Chinese’. The 50 men had paid people smugglers for passage from Singapore to Fremantle and had been promised work on arrival in Australia. Some things never change! 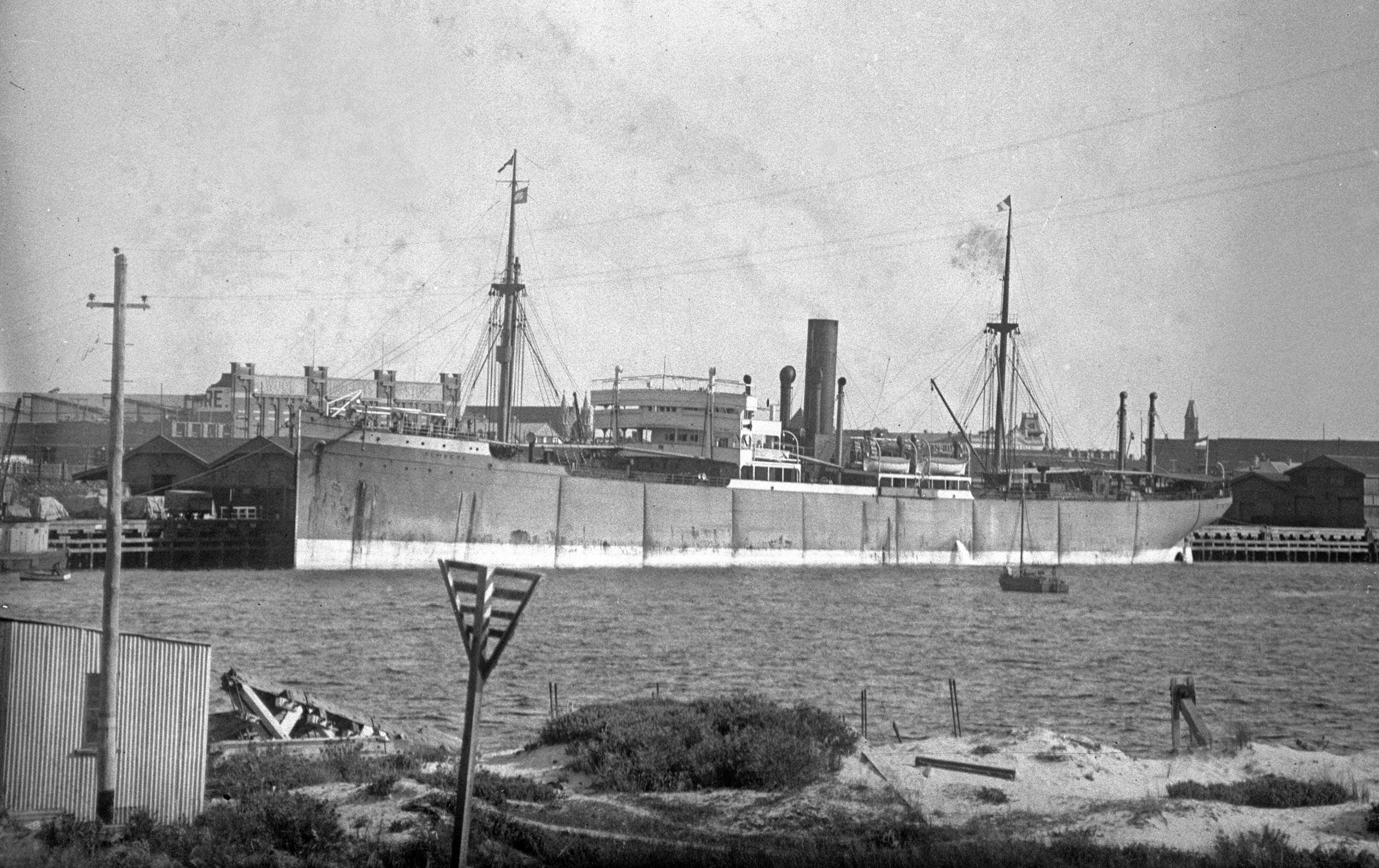 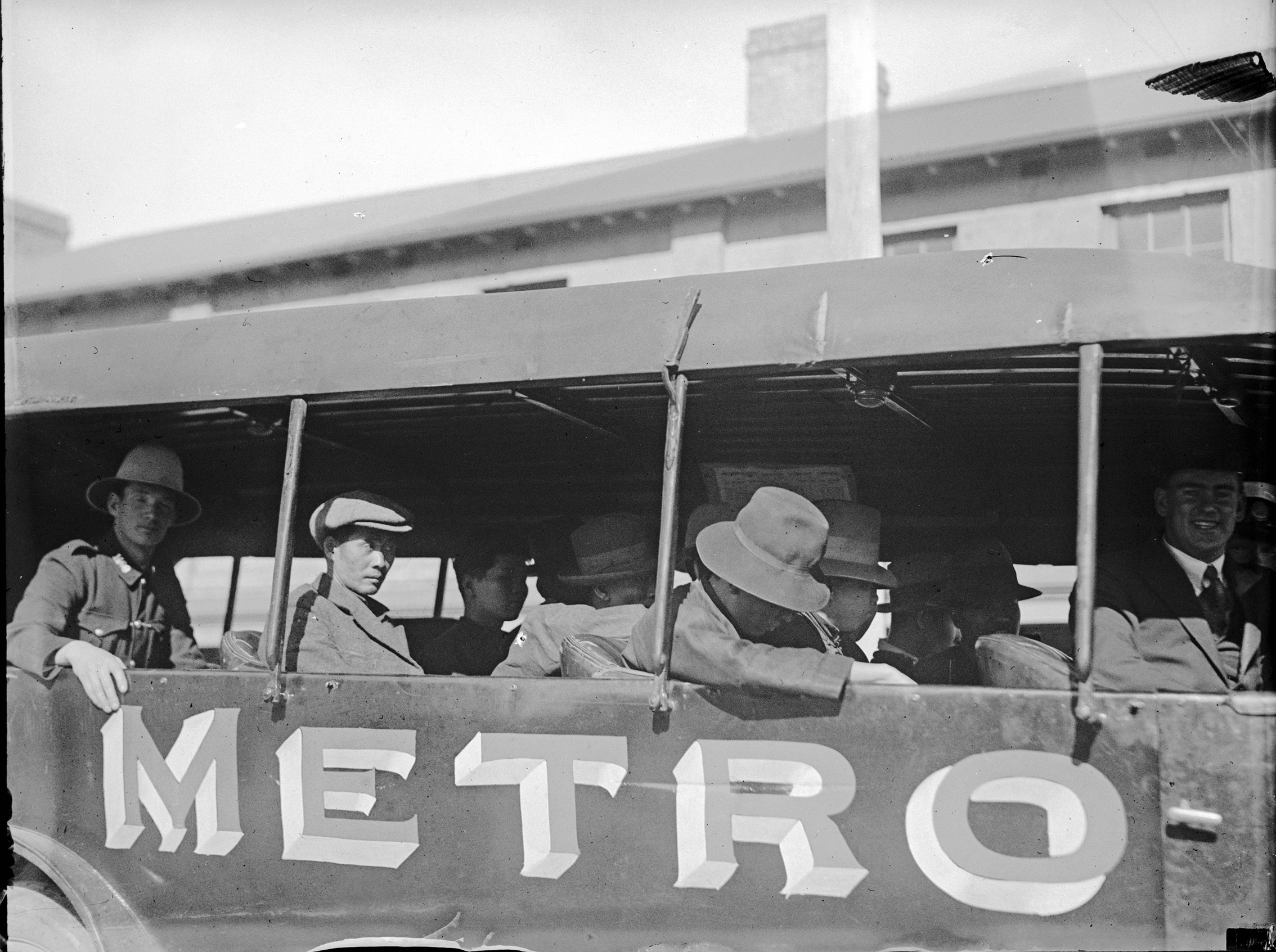 Battye Library – CD-B53
• 1924 – The famous 46,680-ton battlecruiser HMS Hood arrived at Fremantle as a part of the Special Services Squadron’s 38,152-mile Empire Cruise. At the time of her arrival in Fremantle, the 860–foot–long Hood was the longest ship to enter and swing in the Inner Harbour. The visiting fleet, which included the battlecruiser HMS Repulse, attractedmassive crowds during its stay in port. Both the Hood and Repulse were lost in sea battles during World War II. 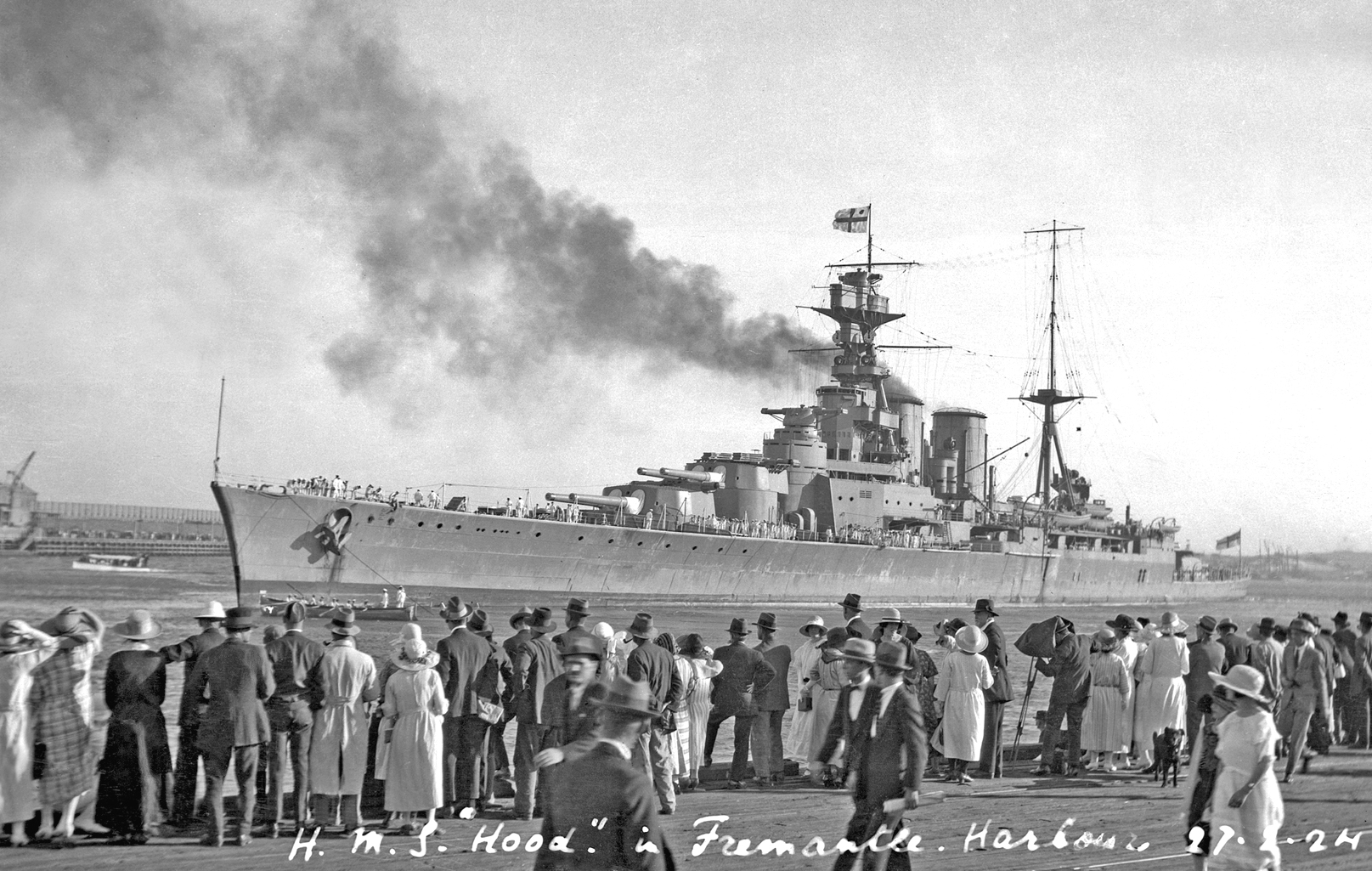 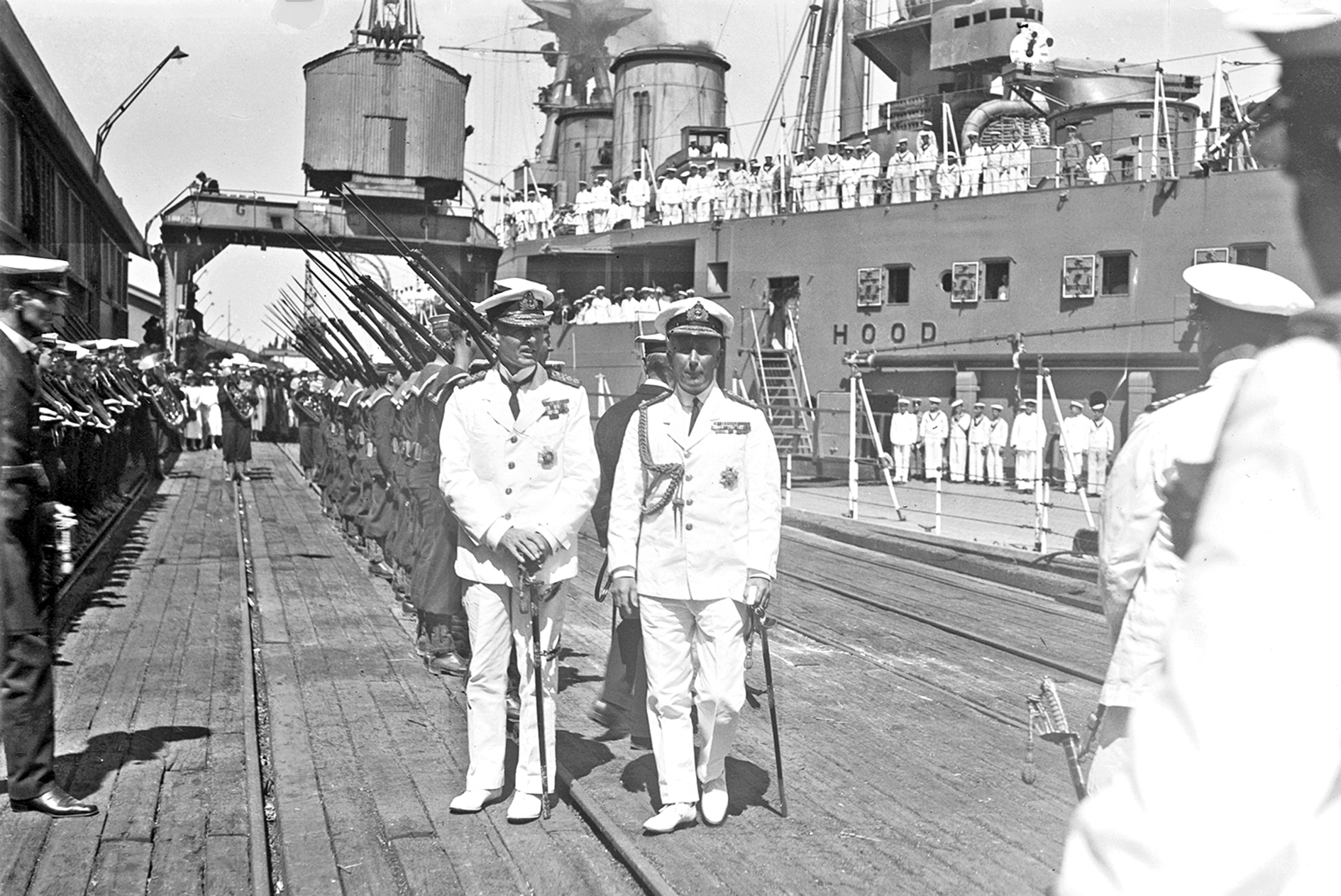 • 1940s – Many can still recall the troopship Queen Mary, also known as the “Grey Ghost”. The 81,237–ton Cunard White Star liner was one of the greatest ships of all time. She visited Fremantle 19 times between May 1940 and March 1943. According to Sir Winston Churchill, Queen Mary’s great war record, together with other great liners converted to carry troops, possibly shortened the war by a year. Her younger sister Queen Elizabeth made 11 visits to Fremantle, however the old liner Aquitania made 22 visits during the war. 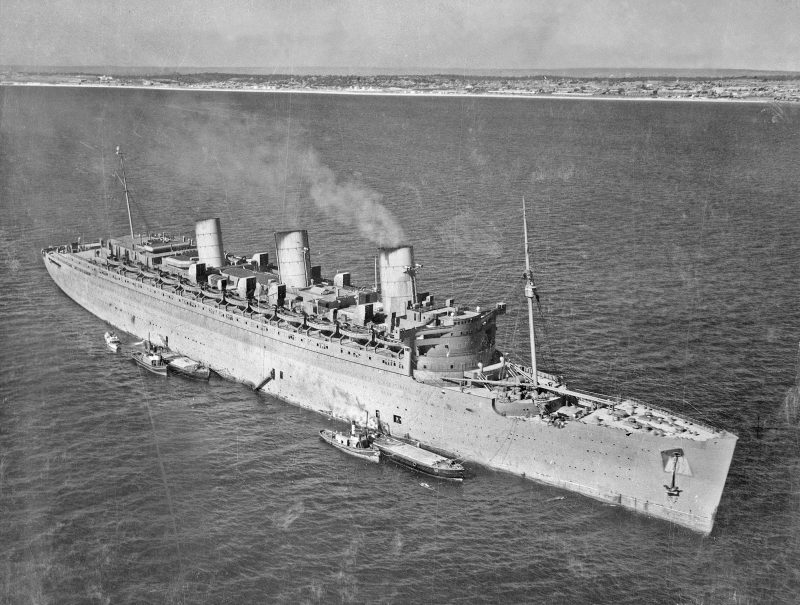 • 1941 – Fremantle was the very last port for sailors aboard the doomed HMAS Sydney, lost off the northwest coast, on her way back to Fremantle,after an encounter with the German Auxiliary Cruiser Kormoran. All 645 hands aboard were lost,Sydney was not found until March 2008 off Shark Bay. The Sydney’s fate remains one of the most poignant wartime stories in Australia’s history. 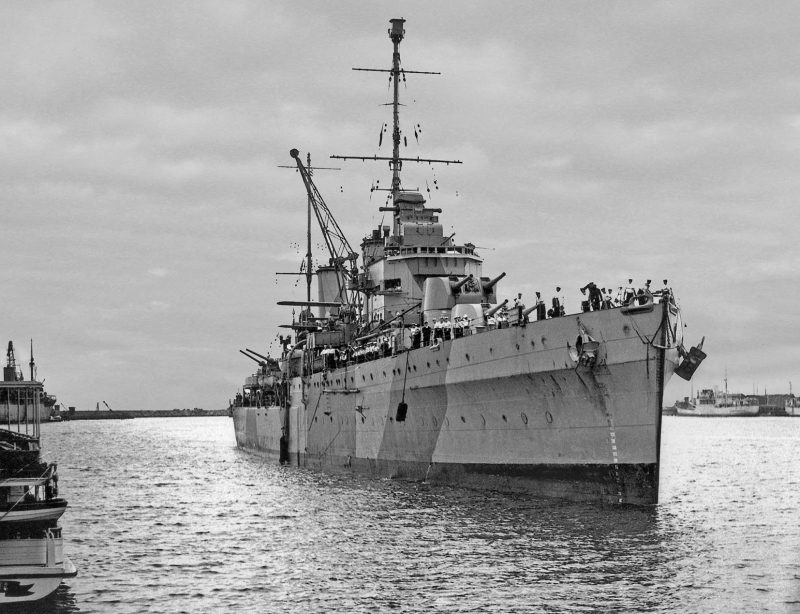 • 1945 – Fire! What a blood-chilling cry that must have been, when it was discovered that the cargo vessel Panamanian on North Quay was burning furiously. Not just that, but all around it were warships and submarines loaded with ammunition and explosives. Those vessels were quickly moved out of the harbour and a long fight commenced to put the fire out. One New Zealand sailor died, when he fell down a hatch during the battle. It transpired that oil on the water caught fire when a piece of burning sacking was thrown overboard by a stevedore and became a wick. The ship was extensively damaged and the 10,000-ton cargo of flour lost.
• 1948 – Our Don Bradman – the greatest cricketer ever, say many – passed through Fremantle several times over the years. In March 1948 the Australian Test team captained by the Don departed Fremantle on the liner “Strathaird”. It was his fourth and final tour of England. This Test team was famous for being the only Test match side to play an entire tour of England without losing a match. Strathaird was one of the famous P&O white sisters, Strathnaver, Strathmore, Strathallan and Stratheden. We imagine plenty of cricket practice occurred on the deck. 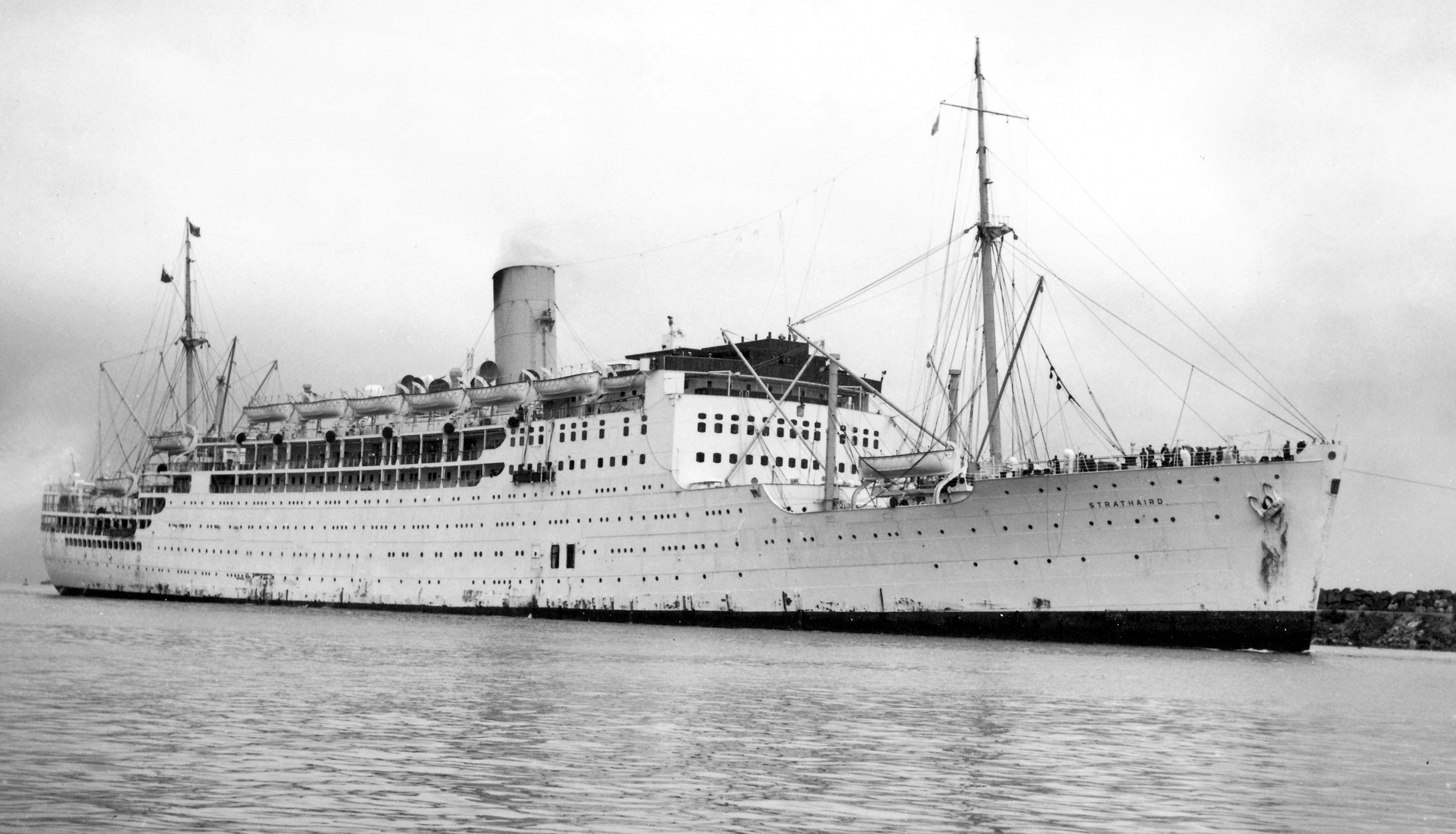 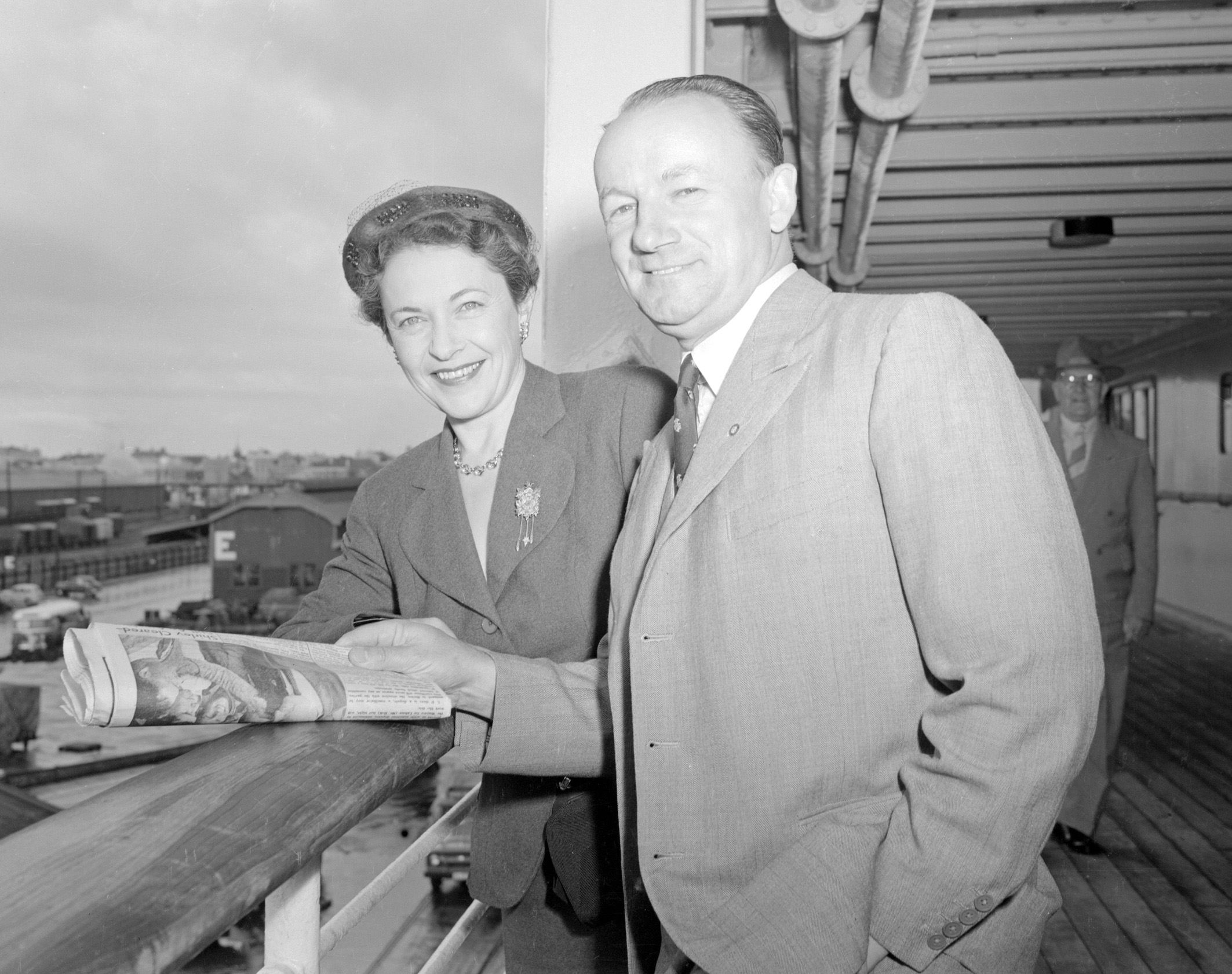 DONATE NOW
• 1948 – Hollywood came to Fremantle in 1948 when film stars Vivien Leigh (Gone with the Wind) and Sir Laurence Olivier arrive on the Shaw Savill liner Corinthic with the Old Vic Company as a part of anAustralian tour. She had three similar sister ships, Athenic, Ceramic and Gothic, which, in 1954 as the royal yacht, brought the Queen and Duke of Edinburgh to Fremantle and Australia for the very first time. 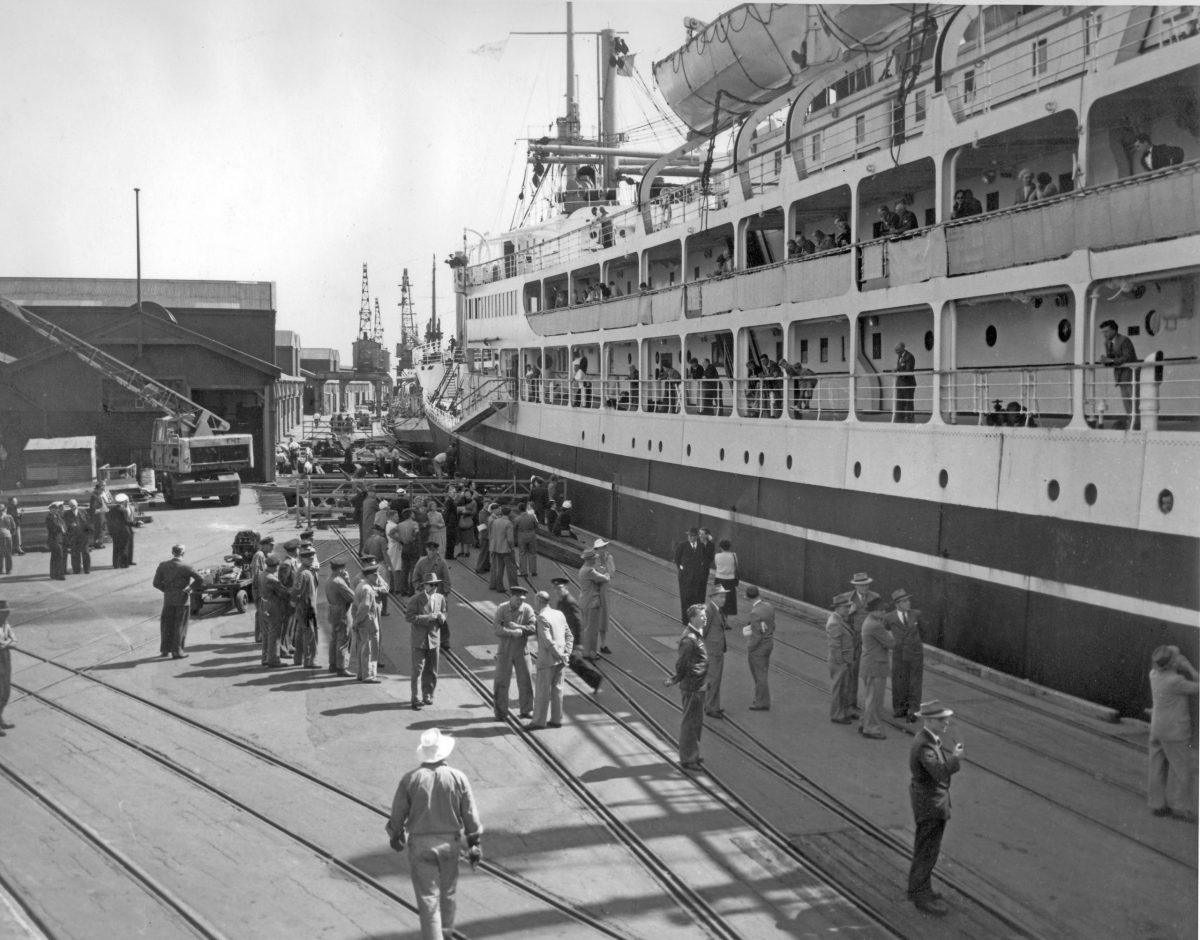 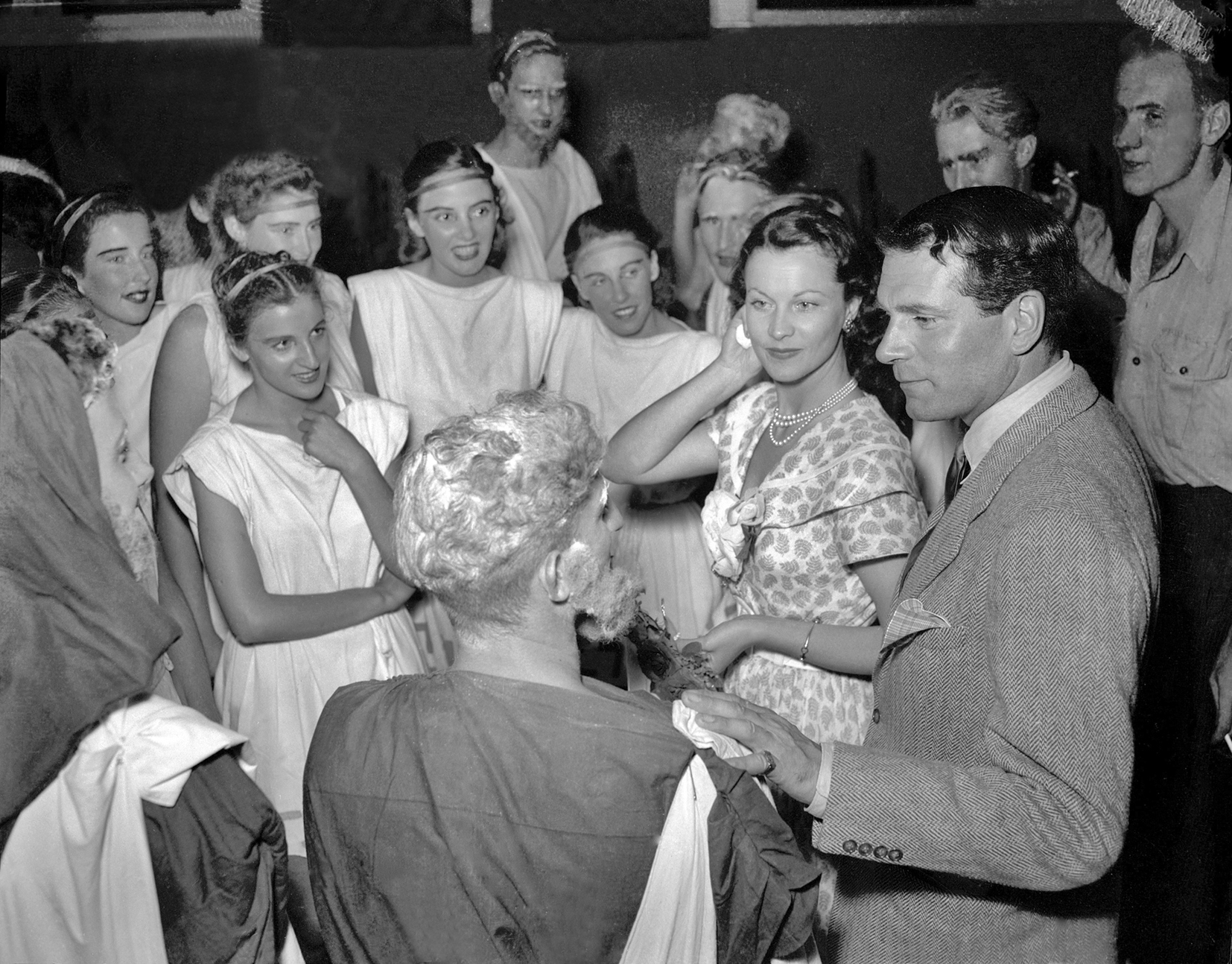 16 March 1948 – Reception for Old VIP Company In early 1948, stage and film legends Sir Laurence and Lady Olivier (Vivien Leigh) disembarked in Fremantle from the liner Corinthic. The Australia-wide tour was sponsored by the British Council and Perth was the start. They were accompanied by 30 other members of the famous Old Vic Company of actors. They playe
• 1961 – The P&O liner Canberra became the largest passenger vessel to enter Fremantle Inner Harbour. The passenger terminal was initially designed to cater for the new 40,000 ton plus superliners “Canberra” and “Oriana”, which took first-class and tourist class passengers including many migrants. Fremantle’s heritage-listed terminal remains the only one in Australia that can berth two ships at onceand was unique in its design. 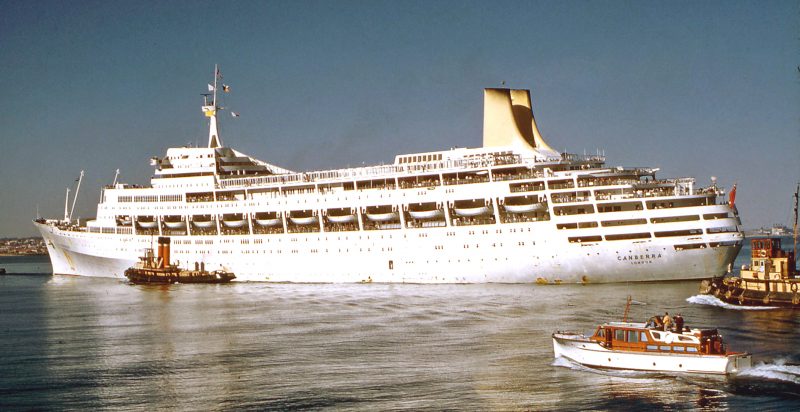 • 1964 – Australia’s very own “Kooringa” arrives – world’s first, purpose-built container ship. Few know that while containerisation was ‘invented’ by the Americans, the Australians perfected the idea. The Aussies were the first to build a cellular ship specially to carry containers, and the Kooringa was it. 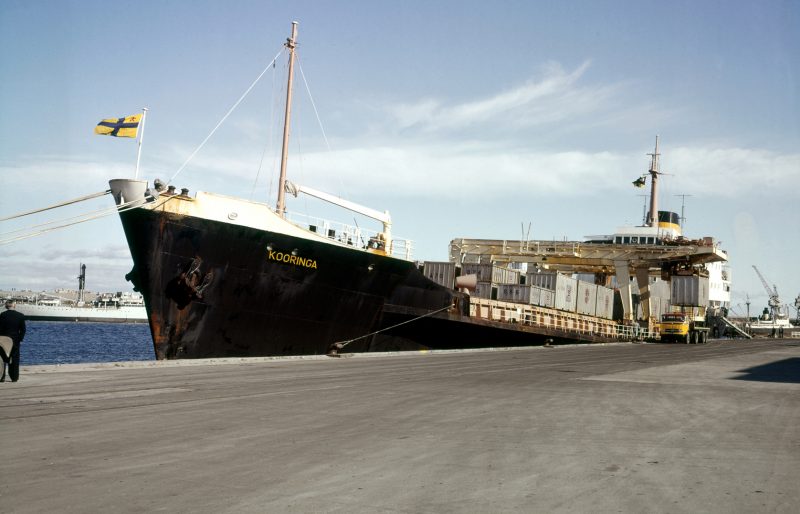 • 1969 – Rare film taken by the former Mayor of Fremantle Sir Frederick Samson shows the Encounter Bay entering the Inner Harbour as the first international container ship to make Australian landfall down under. She officiated at the opening of the Fremantle Port Authority’s new container terminal at 12 Berth North Quay. Encounter Bay was truly the start of the international container trade in Australia, and it happened right here in Fremantle! Sir Frederick’s film can be found online. 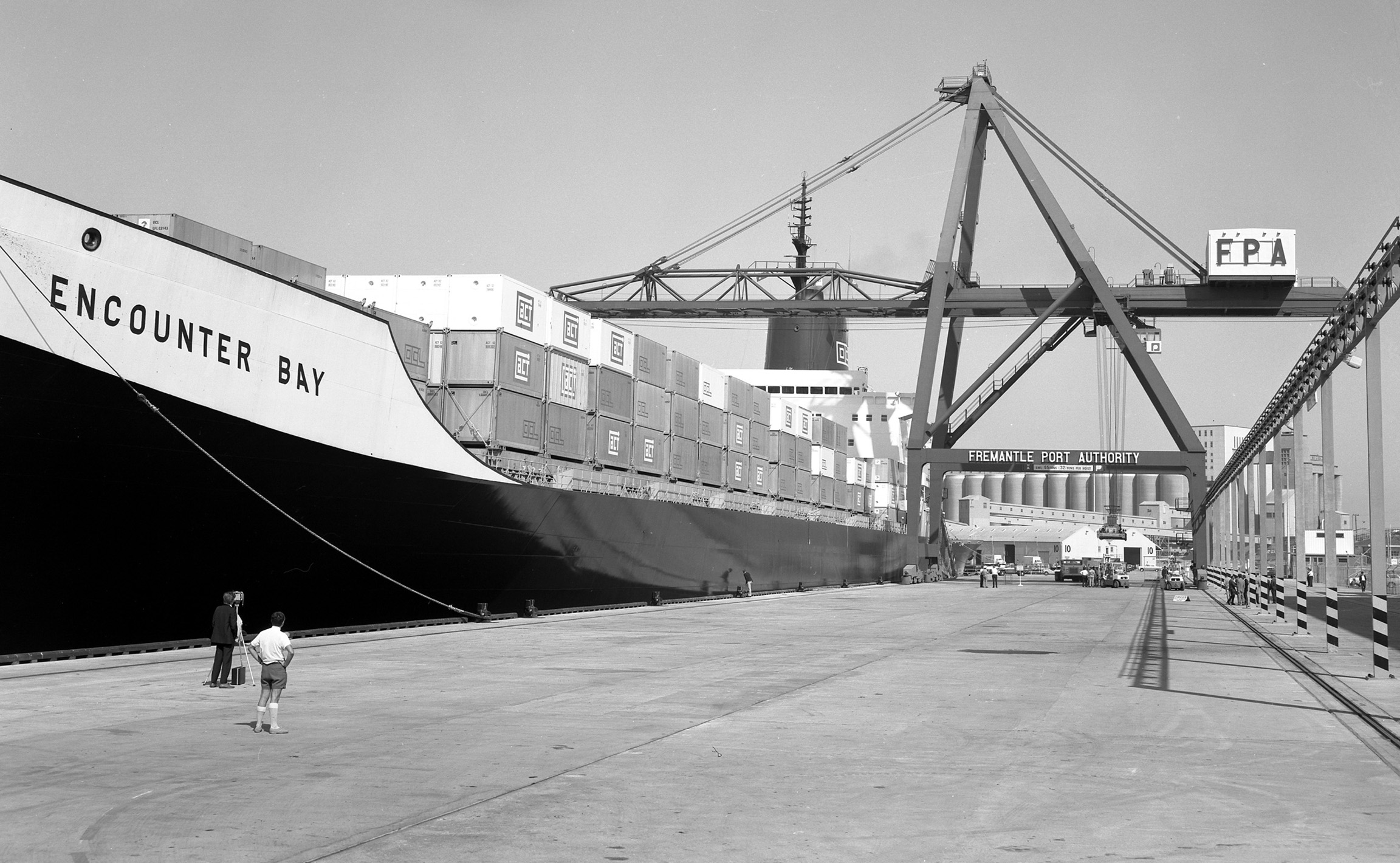 • 1985 – Everyone’s standard for cruising luxury, the Cunard Line’s famous Queen Elizabeth II made the first of several visits to Fremantle in 1985. Its keel was laid in 1965 and it ended up sailing 5.6 million miles – the furthest distance by any ship, ever. The QEII had a top cruising speed of 32.5 knots.Temporarily a troop ship for the UK during the Falklands War, it quickly resumed its role as a premier cruise vessel but after 1000 voyages, it was retired in 2008 and after some doubt about its future, it is now a floating hotel in Dubai. 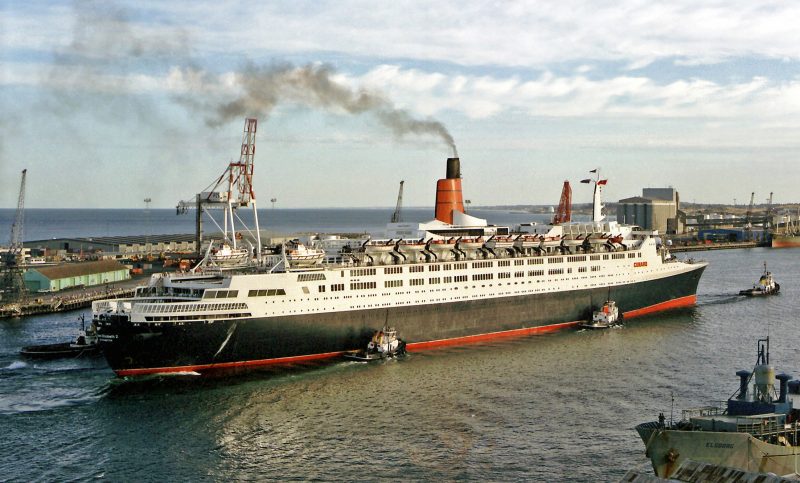 • 1987 – The Fremantle Passenger Terminal has welcomed plenty of famous cruise ships, but during the America’s Cup defence, the “Love Boat” – the Island Princess – was among them. The TV series introduced millions to the concept of cruising in the 1970s, running for ten seasons and – in our case – helping to showcase destinations like Sydney and the Opera House. The Love Boat was also filmed aboard the Pacific Princess. 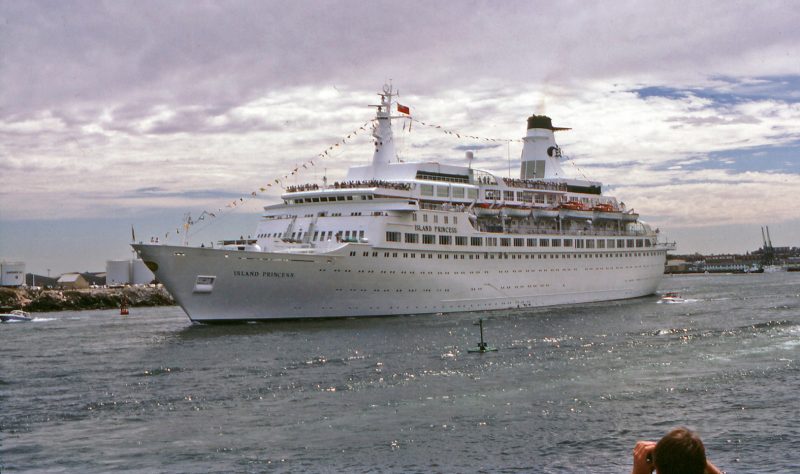 • 1991 – There’s no mistaking the long, loping, bow of Iowa-class battleships and perhaps the most famous of them was the USS Missouri, which entered Fremantle Harbour late in its career, in 1991. The deck of the Missouri was the scene of theJapanese surrender in Tokyo Bay in 1945. For the populists, it was also the major prop of Cher’s hit video for her song, Turn Back Time, as well as the set of the Steven Seagal action movie, Under Siege. Missouri served in World War II, Korea, Vietnam, and the Gulf War. It’s now a museum ship in Pearl Harbour (or Harbor, if you like!). 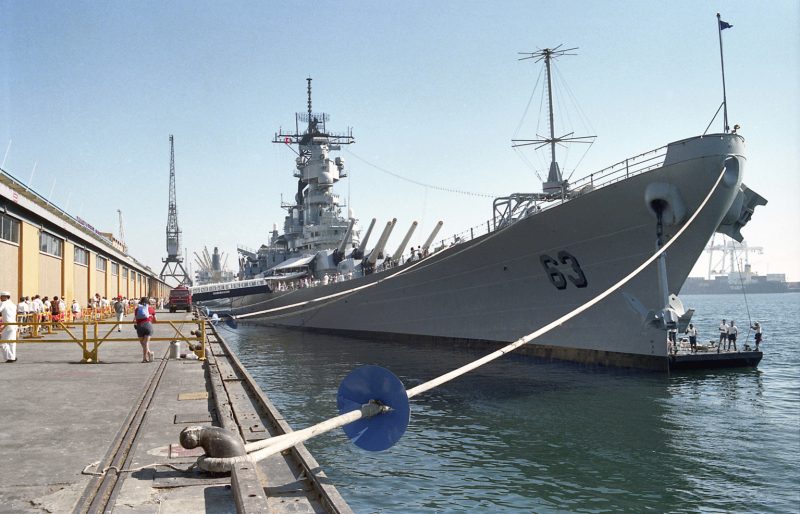 • 2006 – The liner Athena began her cruise program from Fremantle. She was the former Swedish liner “Stockholm”, which sunk the Italian luxury liner “Andrea Doria” on a foggy night off Nantucket in the Atlantic, in 1956. The Andrea Doria was no match for the ice-strengthened bow of the Stockholm and the former’s captain called ‘Abandon ship’. Fortunately, other ships in the vicinity saved many lives, with just 52 killed in the collision out of 1662 passengers and crew on the Andrea Doria. The Stockholm was given a new bow and became one of the longest-operating cruise ships of all time, still in action after 73 years, since her launch as Stockholm, as the current cruise ship MV Astoria. 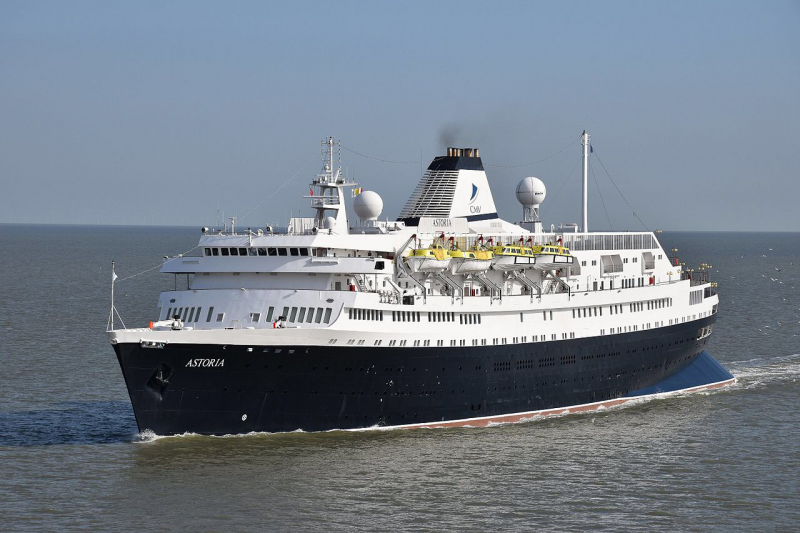