The recent excellent report on Port Hedland by the Shipping News’ Shipping Correspondent, PA Sinclair, set me to thinking about my period working there as a Boarding Officer intermittently through the years 1967, 1968, and 1969 – more than 50 years ago! 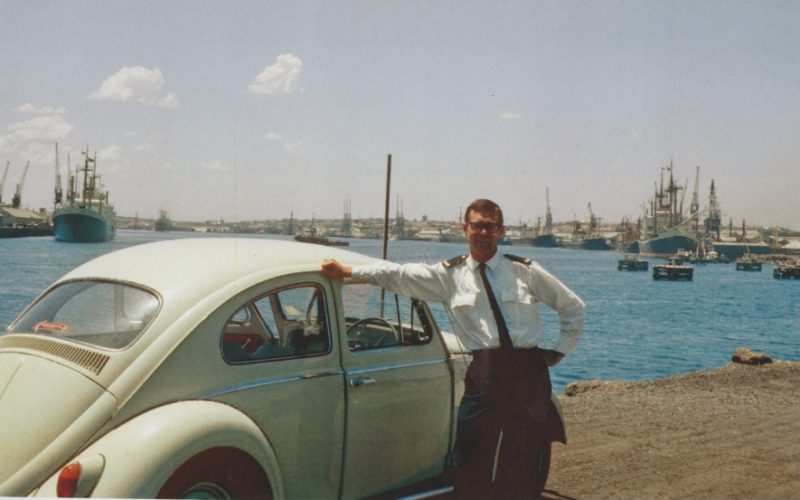 I was a 24 year old Customs Officer in 1967 and arrived in Hedland on Friday 3 March, after an exhausting and hazardous 2000 kilometre road journey in my old Volkswagen, which I had purchased especially to drive up there, use, and sell when I left. 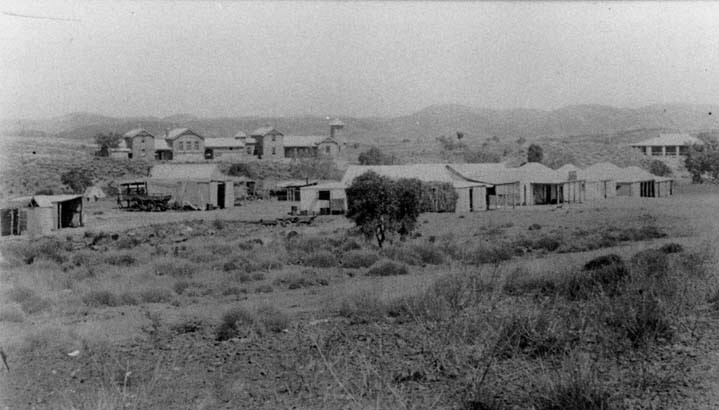 Marble Bar, a long time ago

I came up via Marble Bar because the North West Coastal highway (mainly dirt) had been wiped out by flooding rains. No Karratha nor Newman then.

I was in Hedland for temporary periods through those years because it was easier for the Department to move a young single fellow in and put him in the hotel rather than move a family there.

Having said that, the hotel rules were that you were in a twin room and whoever they had booked in they put in the other bed. Complete strangers.

I was lucky in that three of my long term room mates were harbour pilots so we had stuff in common and got along.

Eventually they built us a single men’s quarters.

Shipping in Hedland initially comprised the iron ore ships exporting from the Goldsworthy Mining Company’s berth on Finucane Island, and manganese exporting ships from the wooden ‘town jetty’, which had in fact been going on for years. 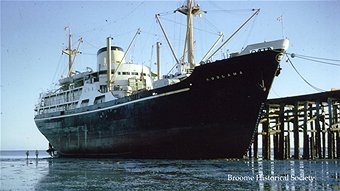 Also the Stateships called there as they serviced the Pilbara and Kimberley.

The ‘new’ wharves for Leslie Salt and Mt Newman mining, owned by BHP, were under construction through these years.

The methods of loading iron ore and manganese ore could not have been more different. Iron ore was poured into a ship’s hold off a large conveyor belt although not, by a long way, as fast a rate as it is today. 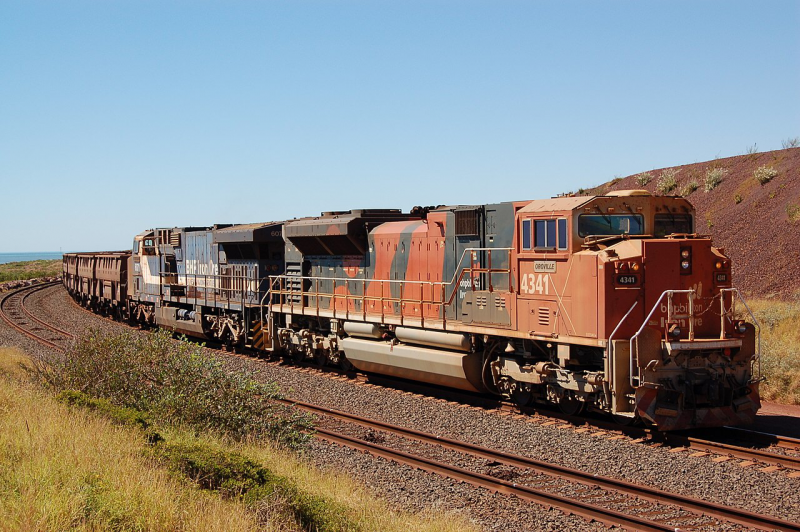 The ore had been freighted in from Goldsworthy mine by train. The dust that was created blew across the water directly on to the town and coated everything in a fine red dust. If you pegged your clothes to the clothesline you regretted it.

The Department built us a single men’s quarters excellently located near the pubs overlooking the harbour. It was ‘tropical’ design so very soon it was all covered in red dust.

The manganese ships, on the other hand, were loaded slowly and laboriously by dumping ore in the hold from large kibbles of ore which had been transported in on trucks from Woodie Woodie minesite, 300 Kilometres from Hedland.

Our Customs work in Hedland was mainly processing the on board paperwork which the ships had to present. Ships on arrival presented documents relating to crew, crew possessions, ships stores and other matters relating to the cargo which, of course, was the outward cargo of ore.

We BOs boarded the ships with the pilot and completed the work on board as the ship proceeded to its berth at Finucane Island or the town jetty. 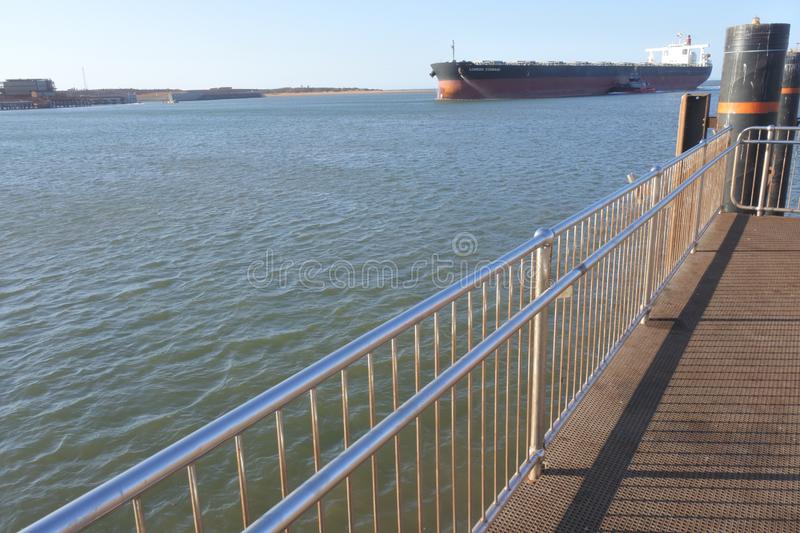 Some of the ships we also searched, but we never found any contraband. Searches commenced at 5 pm at the end of a normal working day so I’m not sure whether it was our inefficiency or the crews concealed nothing!

Boarding was always an exercise. Certainly, no talk of helicopters and not even a flash pilot boat. The pilot boat was generally a ‘work boat’ hired from a local. Ships arrived in ballast, so we had a ten metre or so climb up the pilot ladder.

Getting the ships alongside the berth was also an exercise for the pilots. They had to sail past the berth to the turning pool, drop their anchor at the right time and, helped by the tide flowing up from behind them, swing around on the anchor and proceed back to the berth against the inflowing tide. Not forgetting that it is the weight of the chain which constrains the ship, not the anchor itself.

Iron ore was exported mainly to Japan. The first ship to take iron ore out of Hedland in June 1966 was the beautifully named ‘Harvey S Mudd’. Its companion was the ‘Allen D Christensen’.

The other ships were mainly Greek crew or Japanese crew. Ten days up to a Japanese port, discharge and then ten days back to Hedland. They had to present the same paperwork every voyage, so processing generally went like clockwork.

Customs staff consisted of the boss, a married man with wife and children, then three of us single men who lived in the SMQ. Hedland was a very daggy town in those days. (Don’t know what its like now!) Population about 3000. We mixed socially with other public servants, nurses and school teachers. We were lucky to have our own ‘house’ and life was very social. 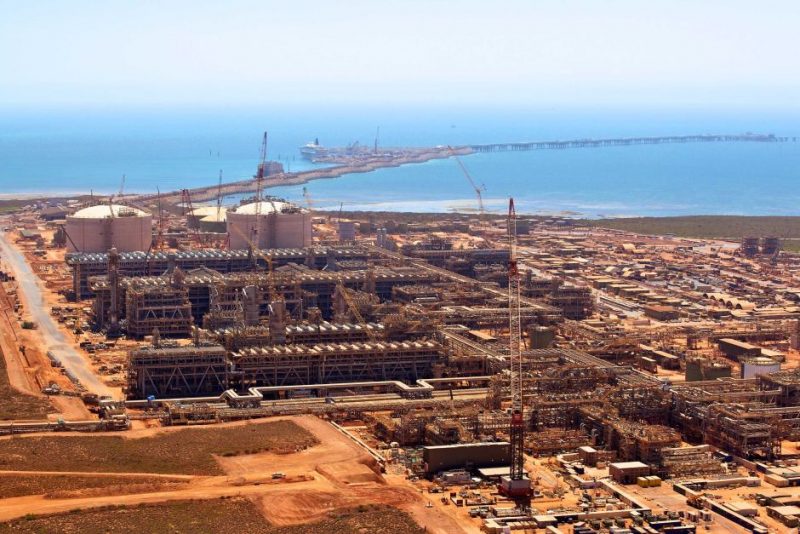 The other good thing about Hedland was that we processed ships arriving at Barrow Island, one of my favourite places. Why? Because it was clean! Oil out of the ground on to the ship. No dust. No red stain.

I had a similar affection for the salt export ports, such as Useless Loop. 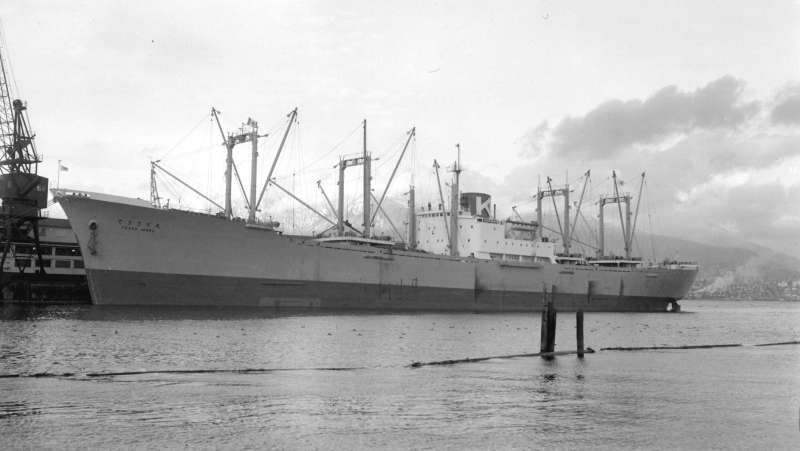 Normally I flew down to Barrow but on one occasion I hitched an overnight ride on the MV ‘Texas Maru’ which was sailing there from Hedland. Most ships had spare cabins or, as they were misleadingly called, ‘Owners Suites’. I turned in late that night staying up to solve the worlds problems over a bottle of saki with the young purser who wanted to improve his English.

I had three sojourns at Hedland. Each time when I returned, I thought it can’t possibly be as good as it was last time. But it always was. Renewed old friendships who were still there. Made new ones from those who had arrived in my absence. There was plenty of work but we could handle it without too much stress. Things are always a bit easier in the outports. Being part of the opening of the Pilbara iron ore industry was indeed a privilege.

In case you missed Michael Metcalf’s first instalment, here it is again, Adventures of a Boarding Officer in the Swinging Sixties.