Five ways the shipping industry can reduce its carbon emissions

The merchant navy – some 20,000 ships – carries the vast majority of trade goods around the world. Unfortunately, they also spew toxic pollutants that harm people and the environment.

A shipping industry summit is looking into how it can reduce its share of global greenhouse gas emissions in line with the Paris Agreement. But a lack of low carbon technologies is not the problem.

The International Maritime Organization’s (IMO) 72nd Marine Environment Protection Committee meeting (MEPC) in London started off by being a promising, yet contentious gathering, as the industry desperately tried to agree a strategy for reducing emissions.

The sector has responded to this challenge with differing levels of enthusiasm. The Marshall Islands called for a 100% cut in emissions by 2035, a group of countries (including India and Saudi Arabia) pushed for no outright cap on emissions, while the European Union wanted a cut of between 70% and 100% by 2050. It is looking likely that a strategy to deliver a 50% reduction from 2008 levels by 2050 is going to be the agreed outcome. Many fear this demonstrates insufficient progress.

Previous analysis indicates that significant cuts in emissions within the sector will be extremely challenging to achieve unless fundamental changes are realised in the short term.

Some options on the table

So what can the sector do to rapidly reduce its emissions in the near term? There are many technical measures and operational improvements already being investigated in industry and academia. Here are five viable options, which are not necessarily mutually exclusive, that could help the industry cut emissions.

The most hotly debated of these measures is undoubtedly the choice of fuel burned on the ships themselves. With climate change firmly on the agenda and the historic legacy associated with the use of high sulphur content heavy fuel oil, the sector is at a pivotal point with regards to future fuel choices. 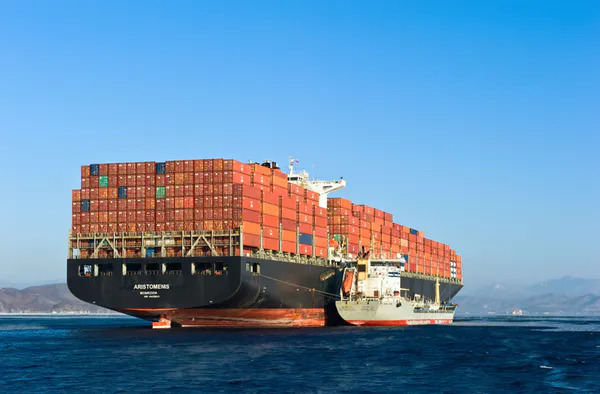 A tanker bunkering (refueling) a container ship in Nakhodka, Russia, in February, 2018. Shutterstock/VladSV

Regulation surrounding local pollutants means that the future use of heavy fuel oil is unsustainable. This topic is also being discussed separately at MEPC in association with sulphur limits in shipping fuels. Furthermore, ongoing efforts at MEPC to introduce more stringent measures on climate change mean that heavy fuel oil, diesel and liquefied natural gas (LNG) are not viable. This is despite LNG being seen by many in the sector as the most viable fuel to deliver on both these aspirations.

To understand the full extent of the environmental implications, it is important to consider the emissions released over the full life cycle and not just during fuel combustion. These “upstream” emissions include those associated with growing and/or manufacturing, distribution, use and disposal of a shipping alternative fuel. In failing to consider these wider emissions, there is a risk of misleading the industry and policy on the true emission penalties of any alternative fuels.

Research conducted by Tyndall Manchester has evaluated the upstream and operational local pollutant and greenhouse gas emissions associated with conventional fuels alongside a wider range of alternative fuels up to 2050. The fuels assessed are heavy fuel oil, diesel, LNG, hydrogen (with and without carbon capture and storage), renewable hydrogen, methanol, straight vegetable oil, biodiesel and bio-LNG.

Despite the likelihood of a weaker than hoped agreement on greenhouse gas emissions at MEPC, the analysis here still demonstrates that no widely available fuel exists to deliver on both the motivation of low carbon and low local pollutants. The conclusions for the industry are therefore contrary to its current direction of travel towards investments in LNG.

If the sector were to adopt hydrogen or other synthetic fuels, it would need to rely heavily on the decarbonisation of the energy input required for fuel production to ensure it can deliver absolute reductions in greenhouse gas emissions. It would also need widespread uptake of carbon capture and storage, which is far from a commercial reality. Similarly, bio-derived fuels could be an abatement option, but only if it can be ensured that upstream emissions – in particular, land use change while growing biomass – does not impact wider potential savings.

So looking ahead, if the sector wishes to deliver on the aspirations of MEPC, crucial barriers will be the respective fuel life cycles. The way to overcome these barriers may reside beyond the scope of the shipping sector alone.

As the urgent need to curtail greenhouse gas emissions is the more severe challenge, it is important to ensure that any short term measure does not diminish the potential roll-out of low carbon fuels, in particular when taking into account the long life times of ships and fuel supply infrastructure. To meet the objective of reducing greenhouse gas emissions, whole life cycle emissions need to be accounted for.