March 6, 2020March 6, 2020 in Shipping News
The United Nations Conference on Trade and Development (UNCTAD), has just estimated, on 4 March 2020, in Geneva, that the slowdown of manufacturing in China due to the coronavirus (COVID-19) outbreak is disrupting world trade and could result in a $US50 billion decrease in exports across global value chains.
In February, Mainland China’s manufacturing Purchasing Manager’s Index (PMI) – a critical production index – fell by about 22 points to 37.5, the lowest reading since 2004. Such a drop in output implies a 2% reduction in exports on an annual basis.
Because China has become the central manufacturing hub of many global business operations, a slowdown in Chinese production has repercussions for any given country depending on how reliant its industries are on Chinese suppliers.
‘In addition to grave threats to human life, the coronavirus outbreak carries serious risks for the global economy,’ UNCTAD Secretary-General Mukhisa Kituyi said.
He added, ‘Any slowdown in manufacturing in one part of the world will have a ripple effect in economic activity across the globe because of regional and global value chains.’
According to UNCTAD estimates, the most affected sectors include precision instruments, machinery, automotive and communication equipment.
Among the most affected economies are the European Union ($15.6 billion), the United States ($5.8 billion), Japan ($5.2 billion), The Republic of Korea ($3.8 billion), Taiwan Province of China ($2.6 billion) and Viet Nam ($2.3 billion). Interestingly, Australia doesn’t figure by name in this list of 15. Obviously Australia’s economy is also affected, and not just by reason of China’s toilet paper supplies. 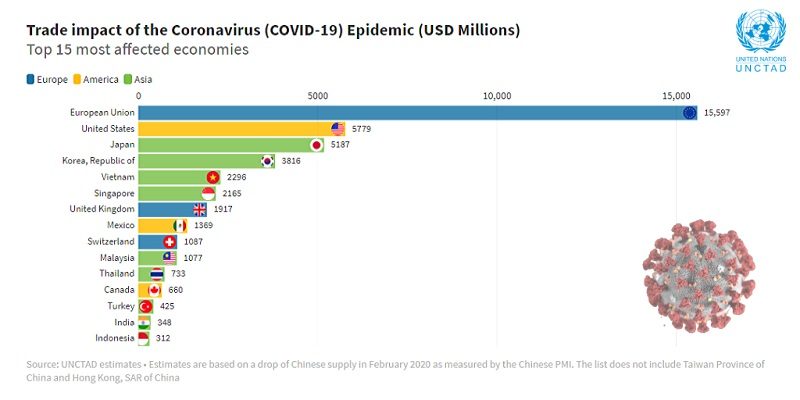 The estimated global effects of COVID-19 are subject to change depending on the containment of the virus and or changes in the sources of supply.
In that regard, in an accompanying article we note there are some apparent signs of recovery, according to the big shipping group, CMA CGM.
Share this
Related Articles