At around 10pm on Sunday 17 August 2014, the container ship AAL Fremantle was being unloaded after arriving in Western Australia’s Fremantle Harbour, when it broke away from its mooring and collided with a rail bridge.

At around 10pm on Sunday 17 August 2014, the container ship AAL Fremantle was being unloaded after arriving in Western Australia’s Fremantle Harbour, when it broke away from its mooring and collided with a rail bridge. The bridge was badly damaged and closed for two weeks, severely disrupting one of Perth’s major railway lines. 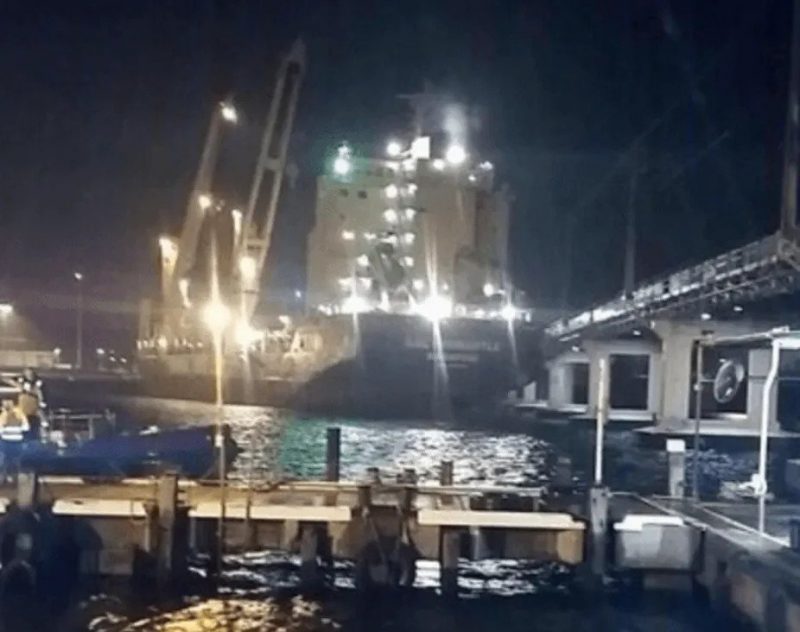 The AAL Fremantle, borne along by a meteotsunami, hits the rail bridge next to Fremantle Harbour. ‏@Mattiegeesu via Twitter

Initially, the incident was attributed to strong winds, but further analysis revealed that the ship’s moorings were actually broken by strong currents in the harbour. Analysis of the water levels and weather data showed that a “meteotsunami” was the culprit.

But these lesser-known cousins of tsunamis are more common than you might realise: a storm triggered another one off Perth at the weekend (hitting at around midnight on September 7), causing another ship docked at Fremantle to break a mooring line. Overall, Western Australia is hit by an average of 10-12 meteotsunamis each year, and similar events happen all over the world.

Meteorological tsunamis, or meteotsunamis, are caused by weather events such as squalls, tornadoes, thunderstorms, frontal systems – generally, anything that causes an abrupt change in atmospheric pressure.

This change generates small wave heights (less than 5 cm) in deep water, but like conventional tsunamis, these waves grow much taller as they move into shallow water and hit the shore.

In Western Australia, meteotsunamis reaching a metre in height are common along the coast between Geraldton and Esperance – an area that includes Perth and its major cargo port, Fremantle. In one case, in January 2013, a single thunderstorm event generated a meteotsunami that travelled more than 500 kilometres along the coast.

To put these waves in context, the tsunami that wreaked devastation around the Indian Ocean on December 26, 2004, caused a maximum wave height in Fremantle of 0.33 m. Meteotsunamis, meanwhile, routinely trigger waves twice as high, and in June 2012 a meteotsunami contributed to the highest ever water level recorded at Fremantle in over 115 years of records. 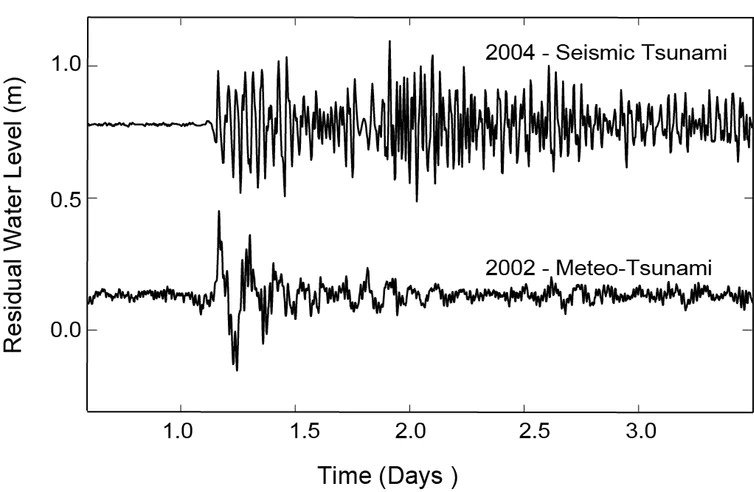 Water level at Fremantle Boat Harbour during the 2004 Indian Ocean Tsunami (top) and a meteotsunami on 17 October 2002 (bottom) Charitha Pattiaratchi, data from WA Department of Transport

Meteotsunamis are a global phenomenon, and have been observed in Japan, Korea, Brazil, the US Great Lakes, the Mediterranean Sea, the United Kingdom, and the US east coast.

Many regions have their own local names for meteotsunamis: rissaga in Spain’s Balearic Islands and around New Zealand; abiki in Japan’s Nagasaki Bay; ščiga in the Adriatic Sea; milghuba in Malta; marrobbio (“mad sea”) in Sicily; and seebär in the Baltic Sea.

The largest meteotsunami ever recorded was a 4.8 m wave that hit Nagasaki Bay in 1979. Meteotsunamis have caused millions of dollars in damage to boats and harbours around the world, and have claimed lives (such as the seven people killed while fishing on a sunny Chicago day in 1954), although many fewer lives than seismic mega-tsunamis.

How are they formed?

Meteotsunamis were previously viewed as part of a “storm surge” – the elevated water levels caused by a storm. Yet meteotsunamis have also been observed during periods of fine weather, meaning that the two phenomena are distinct, albeit similar.

Both meteotsunamis and storm surges result from atmospheric effects, but they differ in terms of time scale. A meteotsunami is active over 3-4 hours and consists of several waves that generate strong, rapidly changing currents. A storm surge is slower and gentler, lasting 12-36 hours and changing the water levels more gradually, causing weaker currents.

Meteotsunamis are triggered by rapidly moving pressure systems with speeds of up to 100 km per hour – the kind of conditions found in squalls and thunderstorms. Just a small change in pressure (about 2 hectopascals, or roughly 0.2% of atmospheric pressure) is enough to create a meteotsunami.

In a static system, a 1 hectopascal change in atmospheric pressure would alter the water level by about 1 cm. But a moving pressure jump can have vastly bigger effects, as the wave interacts with the changing depth of the sea floor. Waves can be boosted even more by “resonance” effects, for instance when the pressure disturbance is moving at the waves’ natural speed, causing the waves to grow ever larger. 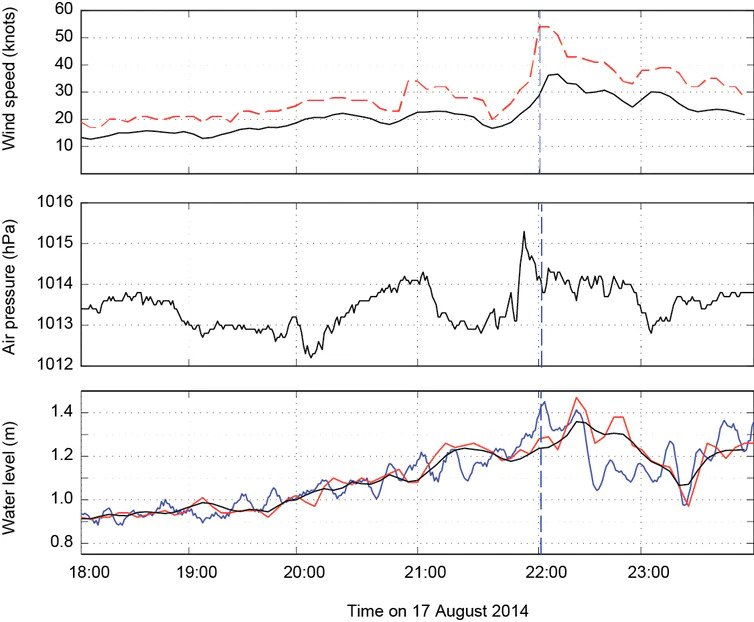 Water level at Fremantle Boat Harbour during the 2004 Indian Ocean Tsunami (top) and a meteotsunami on 17 October 2002 (bottom) Charitha Pattiaratchi, data from WA Department of Transport

What happened in Fremantle Harbour last month is clear when you look at weather and water level data from nearby coastal stations. A travelling pressure jump of 2 hectopascals generated wind gusts of up to 55 knots (102 km per hour). In turn, water levels rose sharply in Fremantle’s inner harbour, where the AAL Fremantle was berthed.

It snapped its moorings and was dragged upstream by currents of 0.6 m per second, hitting a barge before crunching into the bridge. And that’s how a storm out at sea on a Sunday evening gave rail commuters a very frustrating Monday morning.