This third article, by Andrew Sullivan, provides serious network planning options that would have lasting benefits for North Fremantle and Fremantle, and was the subject of Andrew’s presentation to the Better Bridge Fremantle Town Hall Meeting on Thursday 10 September 2020. 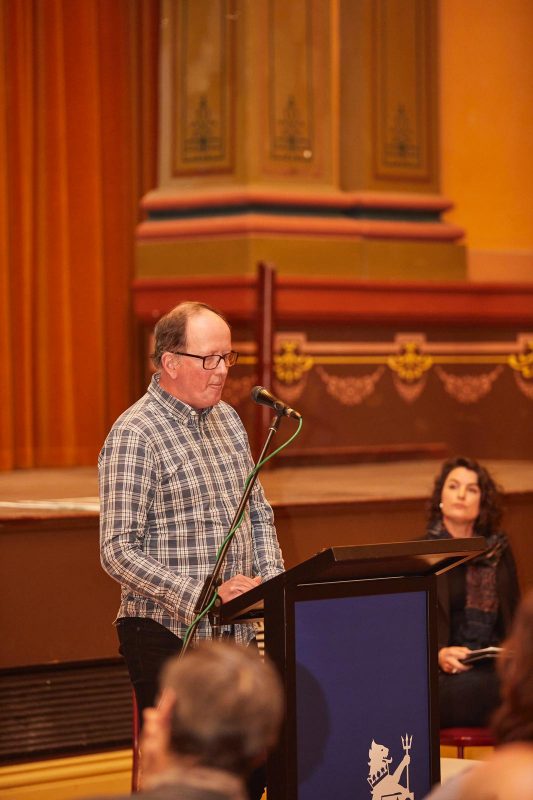 Just pause for a moment and reflect on this amazing place

• Yellangonga’s mob on the north (or the Western Suburbenites),
• Midgegooroo’s people on the south (the South of the River mob),
• a place of trade, where communities have always come together,
• a place that offers an unparalleled lifestyle,
• a place we cherish but must work hard to nurture.

Fremantle has the only river crossing points west of Perth City, some 12 kilometres away. We accept our peninsula must accommodate a primary transport corridor. Equally, we are entitled to balanced planning that enhances the Leighton Peninsula as a place to live.

North Fremantle, the gateway to Fremantle, has been brutalised over many decades. The port engulfed the western half of the town with many houses and industries destroyed. The original container berth resulted in the rail corridors being deviated and contorted resulting horrible rail squeal.  The new rail bridge was pushed as far up-river as possible.

Stirling Highway and its bridge drove a chasm between the town centre and its residential community. Likewise, Tydeman Road wrecked the linkages to the river.

North Fremantle is now fragmented.  Residents are cut off from their places of recreation.  Thankfully, Freo people are resilient and the community fought back. The old town centre has now been revitalised thanks to determined campaigning and passionate local business folk.

In 2000, the redevelopment of the Leighton Marshalling Yards forced a lot of changes. The freight tracks in the marshalling yards were replaced by a single rail loop. True to form, the Port Authority refused to give up any land and the loop was located north of Tydeman Road resulting in the dangerous level crossing we see today.

Main Roads proposed the Curtin Avenue corridor be altered so that a future flyover would deliver that road into Stirling Highway just north of the town centre. Their stated aim is to keep regional traffic away from the freight route on Tydeman Road but at a huge cost to the community.

Traffic from both regional roads will ultimately conglomerate at a mega-intersection just north of the town centre.  Any vehicles destined for Fremantle will understandably head through the centre. When these roads merge, traffic through the centre will increase by 30% overnight. Infrastructure Australia have predicted a massive increase in traffic over the coming decades and this part of the Perth network is identified as becoming one of the most congested.  The existing six lanes of regional traffic have been planned to grow to 10 lanes.

This conglomeration of all the traffic at the top of the town centre could be the straw that breaks the town. The current bridge location locks this destiny in.

Admittedly, there was one good idea that came from that c 2000 study. Wellington Street in Mosman Park was proposed to extend westwards under the railway to connect to Curtin Avenue and the beaches beyond. Sadly, none of our local roads extend westwards across the transport corridor. Using Tydeman Road to access the beaches is only going to get more dangerous. We need more east-west links to reconnect the community to our town centre and foreshores.

A better network will deliver a better bridge

There is an alternative plan that values the Freo lifestyle both sides of the river while still allowing others to move through efficiently. In lieu of hopelessly trying to mitigate the negative impacts of Main Roads’ engineering, this plan integrates regional transport to compliment and serve our urban village.

It doesn’t conglomerate traffic like a freeway does.  It moves people through using a series of dispersed but free-flowing north-south boulevards. It creates the opportunity to deliver those east-west connections that will overcome decades of fragmentation and will ensure redevelopment sites are integrated into our historic village. 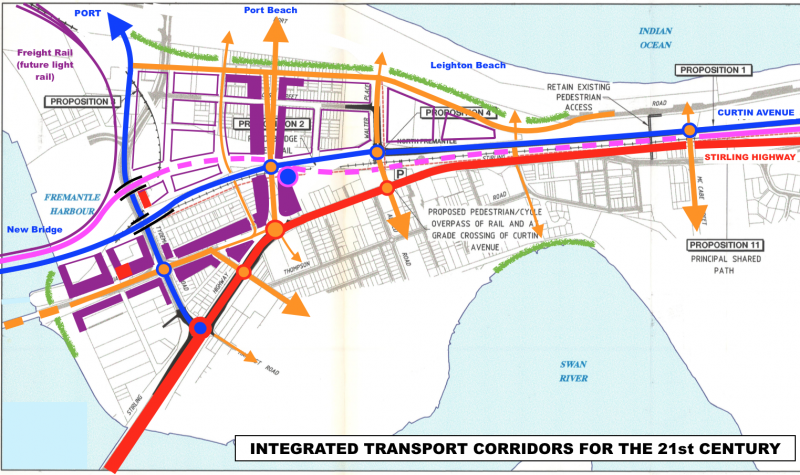 Instead of treating Fremantle like a truck stop on the side of a freeway, it aligns the future Curtin Avenue as a boulevard that runs elegantly into Fremantle.

Instead of cramming in more bridges where North Fremantle meets the river, the town can once again connect to the river and activate the foreshore and the old bridge.

Instead of a flyover that only serves the needs of motorists, we can have a boulevard that connects the town centre to Port Beach through the urban village that replaces the oil tanks.

Instead of a ghost town consumed by cars, we’ll have a larger, more vibrant town centre full of consumers who want to stay. 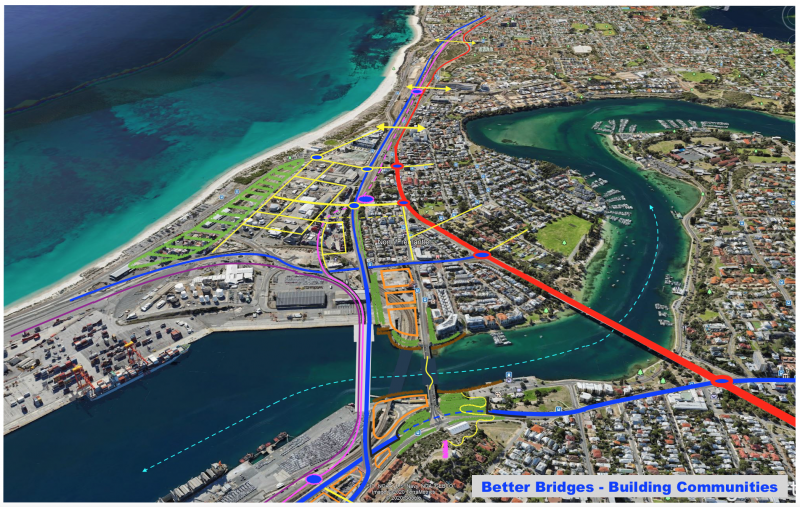 A new single bridge will save $40million. While it can connect to the existing road and rail networks, the owners of the oil tank sites are eager to redevelop so the other changes are needed almost immediately and would make a great stimulus package.

Whether the Port moves by 2032, or stays past 2040, the networks still need to be upgraded. If the port is relocated, then the freight line can convert to light rail to connect the 20,000 new people on the peninsula with the 30,000 people in Freo, and another 20,000 people at Cockburn Coast.

To justify the retention and long-term conservation of the old bridge we need a critical mass of public activity around it.  We must unclutter the foreshore area and make space available so the urban villages on both sides can extend down to the river.

On the south side, Cantonment Hill, the Signal Station, the Naval Store and the foreshore can all be interconnected.

As we approach the bi-centenary of European arrival, surely, this is the type of authentic gateway that a place like Fremantle really deserves.

Others in the Better Bridge Series
* Peter Newman, A ‘Done Deal’ or an ‘Elegant Solution’?
* Ingrid Maher, What North Fremantle Residents Want And Why