Home 2022 June 7 The Peasants Are Revolting – Heritage City or Bar Town? They Ask

The Peasants Are Revolting – Heritage City or Bar Town? They Ask

Not everyone is happy about a tavern proposal at 47 Pakenham Street in the historic West End of Fremantle which is soon to come before the City of Fremantle for planning approval.

Indeed, one could say the peasants are revolting.

In this Opinion Piece, Brian Stoddart explains why.

The hotly discussed 47 Pakenham Street tavern proposal is not just a debate about yet another drinkery joining Fremantle’s already crowded bar scene, but also a litmus test for where Council wants to drive the city.

Developer’s impression of the proposed development

For inner city West End residents (full disclosure, I am one) it is already a matter of conflicting city planning priorities and thought. The proposed site is for a two level (and almost three storey) outlet for five hundred people with live music right in the middle of perhaps the West End’s most densely residential area, opening hours 7am and midnight. The potential for resident discontent is obvious.

Over the years, Council has encouraged residential development as part of bringing life back to the area, and that has supported a myriad of local businesses amidst the ongoing heritage preservation work. Indeed, right now a heritage grant sees a neighbour making a considerable investment in heritage appearance right behind the proposed new tavern.

There is an irony here, too. Notre Dame University has rescued several old pubs and repurposed them, but the West End is now full on renovating other heritage buildings into bars and breweries, all under Council direction.

Residents buy into the area fully appreciating its essential urban nature and all that goes with that. But this new proposal has the potential for second floor patrons to be staring straight at the bedroom windows and living areas of immediately adjacent residential properties opposite, beside and behind.

At a lifestyle level that is clearly unacceptable, and promises of quiet patrons and respectful behaviour are just that: promises, not guarantees of better behaviour when public nuisance has already escalated noticeably in recent years.

And at a financial level, there is a clear resident concern about loss of investment value, something Council should certainly be concerned about the implications of that.

But Council should also be mightily focused on just precisely what sort of a heritage precinct it wants to create here, because this is a clear tipping point. 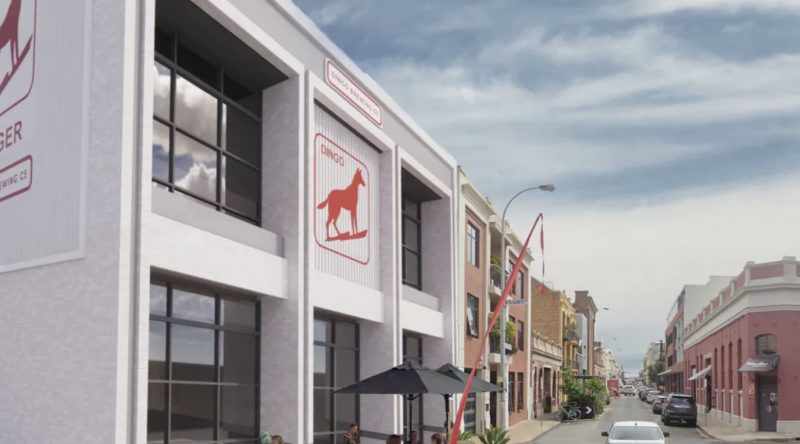 Developer’s impression of the proposed development

The West End is unique, and Council and State Government alike need to be focused on its future if they are at all serious about tourism and international business development growing in scale and impact, if the economy is ever to be anything more than a one commodity trick.

This issue is already in question with the uncertain future of the container port area once functions shift further south in the next few years. Committees overseeing that massive challenge are apparently dominated by bureaucrats and officials with little real stake in the outcomes, and that approach seems to be employed at the micro level in projects like 47 Pakenham Street, as well as at the macro ones like the ill-fated film studio venture.

What the West End and the State both need are far more future-oriented and globally competitive developments that develop home grown talent across hi-tech, the creative industries, value added enterprises and out-of-the-box initiatives linked into higher education and talent development.

Exemplars are easily found: Granville Island in Vancouver, the redevelopment of ports in Glasgow and Oslo, Salford Quays in Manchester and many others.

All of those and more naturally have food and drink outlets. But that is not all they have and in most cases is just a small part of what they offer as development authorities look to the future.

Fremantle should follow that model, not set itself simply as a drinking destination. If that eventuates it will repel more tourists than it attracts.

When Council considers the 47 Pakenham Street proposal, then, it should think hard about what that means for the growing resident community attracted to the area by Council’s own policies, and about what approving such a development says about its ambitions for the West End and Fremantle as a whole.

** Editor’s note: You can have your say on this proposal by lodging a submission by this Thursday 9 June 2022 here on the City of Fremantle MySay site