Home 2022 June 7 The Streets of Fremantle, D-F, From Dale To Fullston

The Streets of Fremantle, D-F, From Dale To Fullston

Welcome to The Streets of Fremantle.

Here’s The Streets of Fremantle, A-C, From Ada To Cypress

In this post we cover D-F, From Dale To Fullston.

This is the second instalment of our popular feature The Streets of Fremantle bringing together the derivation of our street names.

In our first instalment we covered The Streets of Fremantle, A-C, From Ada To Cypress.

In this second instalment we cover streets D-F, from Dale to Fullston.

As we explained in the first instalment, our aim is to produce a survey of all the current streets of the City of Fremantle with the derivations of their names.

Our survey is based on Miss Kate Caldwell’s epic 1931 work and more recent work by the Fremantle History Centre and research by Garry Gillard who compiles the invaluable resource, Fremantle Stuff.

In the entries below, we use FHC to refer to the Fremantle History Centre’s entries, KC to refer to Ms Caldwell’s, and FS to refer to Dr Gillard’s work.

In some cases we will list older street names that are no longer in use.

We encourage you, our readers, to email us additions and corrections and to provide information where we have ‘No information’.

And now we turn to the streets of Freo, D-F. 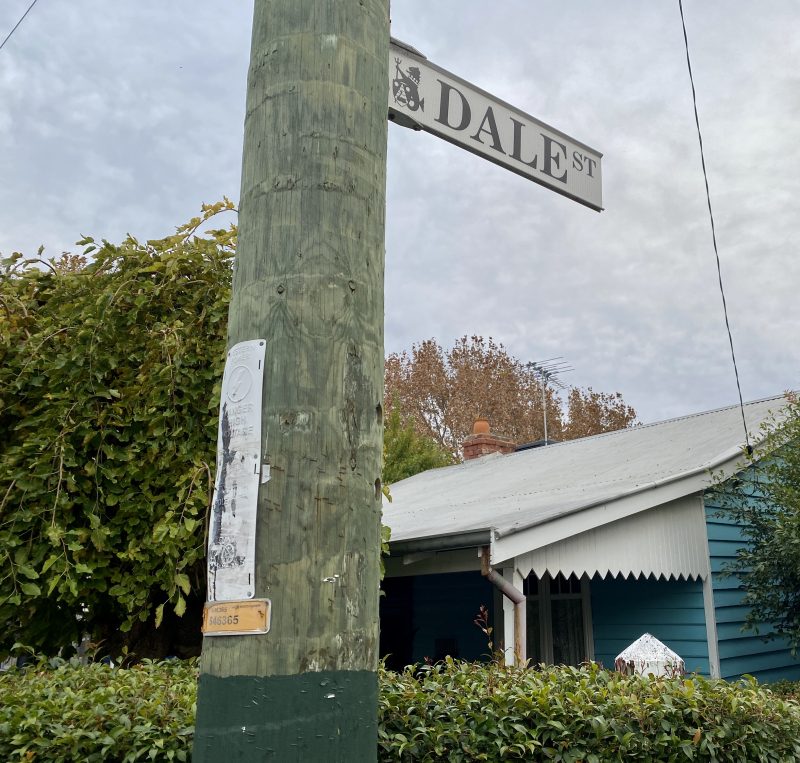 Dalgety Street, East Fremantle
FHC – after William Dalgety Moore (1835 – 1910) a prominent businessman in Fremantle. He founded W.D. Moore & Co, joined WA’s first legislative council, and was the first president of the Fremantle Chamber of Commerce. He owned the Woodside Estate.
FS – gets its name from William Dalgety Moore who had his Woodside estate there. (Jack Lee writes that it comes from the maiden name of Dora Dalgety (1808-1877), the wife of Samuel Moore (1803-1849). W.D. Moore’s middle name was obviously from the same origin.)

Dalgety Street, Fremantle
(See also Croke Lane)
FS – used also to be the name of Croke Lane, named for Dalgety & Co., which had premises there, and was renamed to avoid confusion with the street in East Fremantle. Dalgety & Co. got its name from founder Frederick Dalgety, a Scot who started the business in Melbourne.

Davies Street, Beaconsfield
FHC – after the Davies family. George Davies and family acquired the land from the Curedale family by foreclosure.
KC – See Curedale-street.
FS – after (Alfred) George Davies (1776-1853) was the founder of the family for which the street is named, but it is probably named for George Alfred Davies, who owned a farm there, and built a house on the corner of South and Field Streets (which still exists).

Dedman [reserved road name]
FHC – after Gordon Dedman a founding member of Leighton Surf Life Saving Club (SLSC) in 1934. He was a local businessman, with a butcher shop.

Delamere Lane, Beaconsfield
FHC – after the SS Delamere, one of the ships used by the State Shipping Service of Western Australia between 1946 and 1971.

Del Rosso or Delrosso Place, O’Connor
FHC – after Frank Del Rosso who migrated to Fremantle from Italy in 1920. He was involved in the establishment of the Fremantle Fishermen’s Cooperative. Del Rosso worked extensively with Italians wanting to settle in Western Australia after World War II. He was awarded the Insignia Della Solidarieta Italiana for Services to Western Australia’s Italian community in 1964 and the Italian Friendship Award in 1985. Del Rosso was a Town Councillor for 1973–1985 and 1987– 1992 and was Deputy Mayor, 1978–1980.

Dermer Road, Beaconsfield
[No information.]
* Our regular reader, Robyn Colledge, reasonably suggests the street may well be named after the well-known Fremantle dentist Dr Dermer who conducted his practice upstairs in Atwell Arcade, central Freo, when she and her siblings were kids.

Doepel Street, North Fremantle
FHC – after Glen Doepel (1895 – 1992), a pharmacist in North Fremantle. This street is essentially an overlay of the former street. The original road was probably created in the 1960s following the placement of dredge soil to reclaim the river.

Doig Place, Beaconsfield
FHC – after The Doig Family, residents of Fremantle; several of whom played for East Fremantle Football Club.

Doust Street, Hilton
FHC – after the Doust Family, early Fremantle residents, one of whom was the first volunteer fireman in 1887 and W.K. Doust was a Town Councillor, 1946-1968. 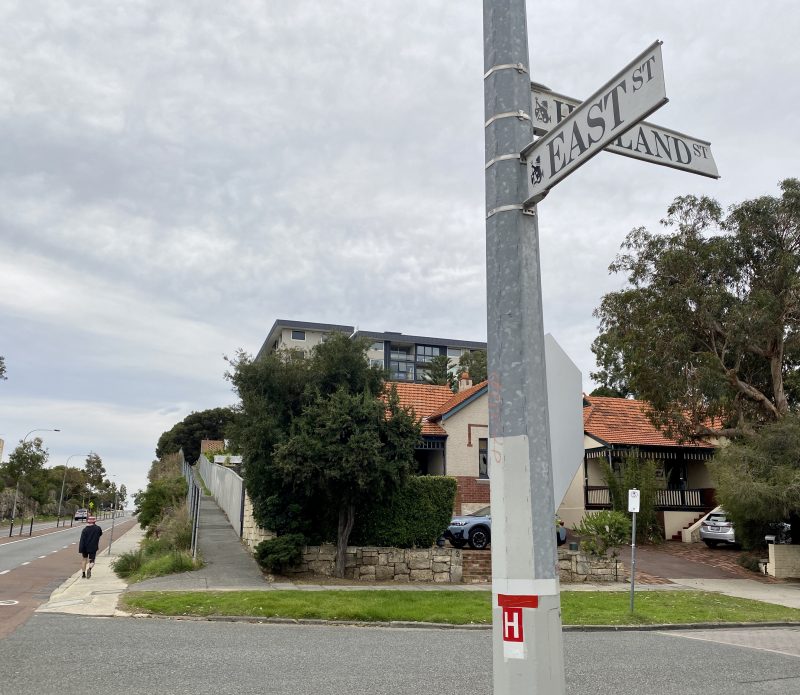 Eastern Bypass –
FS – Eastern Bypass. Name for a road which was intended to continue Stirling Highway southwards from the Stirling Bridge. It was not built. See the article about it in Fremantle, the newsletter of the Fremantle Society: October 1996, pp. 3-4. See also chapter 12 of Ron & Dianne Davidson, Fighting for Fremantle: 113-114.

Edmund Street, Beaconsfield and White Gum Valley –
(See also Chalmers Street)
KC – Sir Edmund R. Fremantle, a nephew of Sir Chas. Fremantle, the founder of the town, with whom he served as Flag Lieutenant from 1858 till 1861. Edmund-street follows Swanbourne-street, which is the name of the family seat of the Fremantles. Sir Edmund died in 1929 in his 93rd year. The portion of Edmund-street southward from South-street used to be called Marmion-street, but this name was discontinued when another street of the same name was made off East-street about the time of Responsible Government.
FS – Sir Charles Fremantle’s nephew was Sir Edmund Robert Fremantle (1836-1929). Previously known as Marmion Road. The next street is Swanbourne Street which is named for the Fremantle family estate. There used to be Edmund Street South and Edmund Street North: the latter is now Chalmers Street.

Elder Place, Fremantle –
FHC – Elder, Smith & Co.’s offices were located on this street. Originally named Bay Street.
KC – Elder Place was altered from Bay-street, the warehouse of Elder, Smith & Co. being in the street. Bay was derived from the fact that the street encircled Shoal Bay on the north of Willis’s or Ferry Point.
FS – was named for the warehouse of Elder, Smith & Co. which was in that part of the street, and has now been converted to apartments. It was originally called Bay Street because it was next to Shoal Bay to the north of Ferry Point, aka Willis Point. As the Elder company is no longer there, and as it is not a ‘place’, just a street, it might as well be called either Phillimore or Beach Street, for the sake of simplicity.

Ellen Street, Fremantle –
FHC – after Ellen Mangles (1807 – 1874, the wife of Governor Sir James Stirling.
KC – Ellen Mangles, of Woodbridge, Surrey, England, wife of Sir Jas. Stirling, the Governor.
FS – Named for Ellen, nee Mangles, from Woodbridge, Surrey, wife of Admiral Stirling, the first Governor of Western Australia. Her name was also given by Stirling to Ellen Brook, which flows into the Swan River. Ellenbrook is now a newish Perth suburb.

Emma Place, North Fremantle
FHC – There were two significant ships named Emma; it is uncertain which one the Place is named for. In the 1840s, a 25-ton cutter owned by Captain John Thomas; built locally, it was used to trade with Singapore. In the 1850s, a schooner owned by Walter Padbury – this vessel could complete the journey from Fremantle to Port Walcott in nineteen days, whereas other vessels took thirty days.

Essex Street and Essex Lane, Fremantle –
FHC – after Essex, England
KC – With Norfolk and Suffolk-streets, this may perhaps have been named after the English county.
FS – Essex, Norfolk, Suffolk Streets are the ‘county streets’ (my term), being named for English counties.

Euphrasie Court, Fremantle, off Tuckfield Street.
FHC – after French-born Adele Euphrasie Barbier (1829-1893), the founder of the Roman Catholic Congregation of Our Lady of the Missions (they established a school on this site). Her religious name was Mother Mary of the Heart of Jesus. 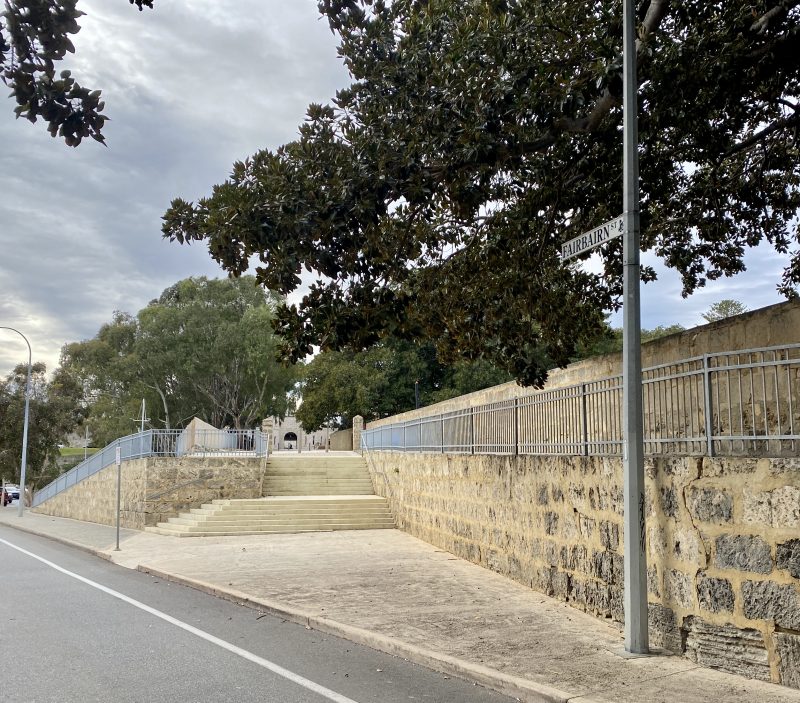 Fairfield Park, Beaconsfield
FHC – Mr. Dwelly had a store there known as the ‘Fairfield Cash Store’; it was a small, fragile, wooden structure. Area off South Street.

Fardon Drive, Fremantle Cemetery
FHC – Ralph Fardon, OAM was appointed to the Fremantle Cemetery Board in March 1994 and was Chairman of the Board in June that year until 1997. He was Town Clerk for the City of Melville and a qualified accountant.

Farrier Lane, Fremantle/White Gum Valley
(See also Hope Street and Watkins Street)
FHC – The name was considered appropriate because of the number of stables, and a farrier, that have been historically located there.

Ferres Street, White Gum Valley
FHC – John M. Ferres was a butcher and had a shop at the corner of High Street and Market Street. Originally known as Elizabeth Street.

Field Street, Beaconsfield
FS – Matron Field was in charge of the Grosvenor Hospital, the entrance of which was on the street.

Fleet Street, Fremantle
FS – This leads from the port entrance at Cliff Street to the South Mole and out to the end of it. I don’t know if it refers to a fleet of ships or to someone of that name.
Editor – or was it ironically named after the famous Fleet Street in London?

Florence Street, South Fremantle
(See also King William Street)
FS – named for Florence JONES, daughter of shipbuilder Frederick Jones (cf. Louisa, q.v.), is now called King William Street. It was the one block between the Mandurah Road (now South Terrace) and Wellington (now Marine) Terrace, continuous with King William Street in 1900: so the name KWS was simply extended to cover the whole street from Marine Terrace to Attfield Street. However, the park on the corner with Marine Terrace retains the name: Florence Park. Florence Jones married Alex Reid, after whom the Reid Library at UWA is named, and became Lady Florence.

Francisco Street, South Fremantle
FHC – after Alexander Francisco ( – 1879) a merchant, postmaster and Fremantle Town Trust member 1848, 1857-63, 1865-66.
KC – Alex. Francisco was associated with Lionel Samson and Son. He later conducted a spirit merchant’s business on his own account, and held the position of postmaster.
FS – Alexander Francisco was a spirit merchant (having previously worked for Lionel Samson) and postmaster, and also member of the first Town Trust.

Friend Street, Fremantle
FHC – after Mary Ann (or Anne) Friend (1794 – 1838) an author, sketch artist and lithographer who captured early impressions of Australia. She made a drawing of the camp at Fremantle on the banks of the Swan River where she, her husband, and husband’s brothers, were living. Early drawings and sketches provide an important record of the landscape and dwellings of the early settlements.

Fullston Way, Beaconsfield
FHC – after Samuel Graves Fullston (1878-1963), a fruiterer in the early 1900s with a shop on Douro Road. He was a wharfie from 1915 to the 1950s. His fruit shop was requisitioned as a storehouse during WW2. 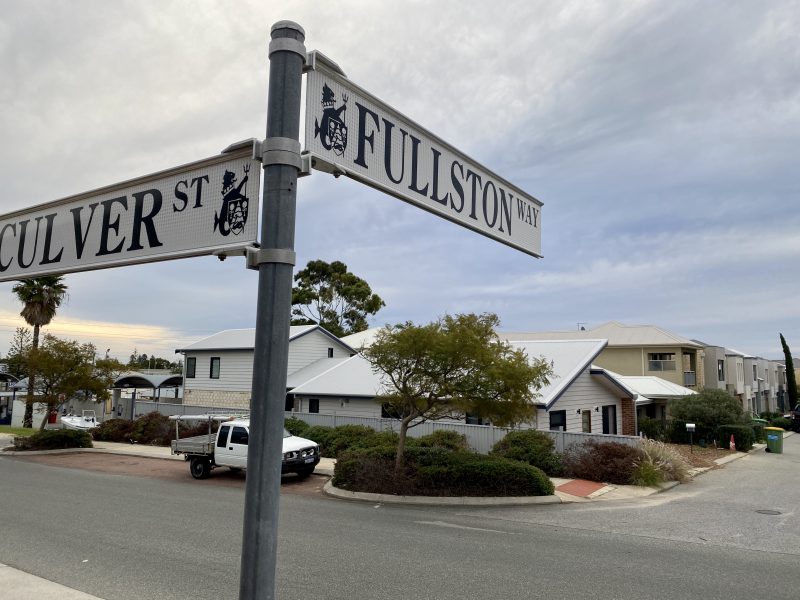