The big issue to date in the Great Bridge Debate has been over the alignment of any new bridge. Questions of design are to come later. 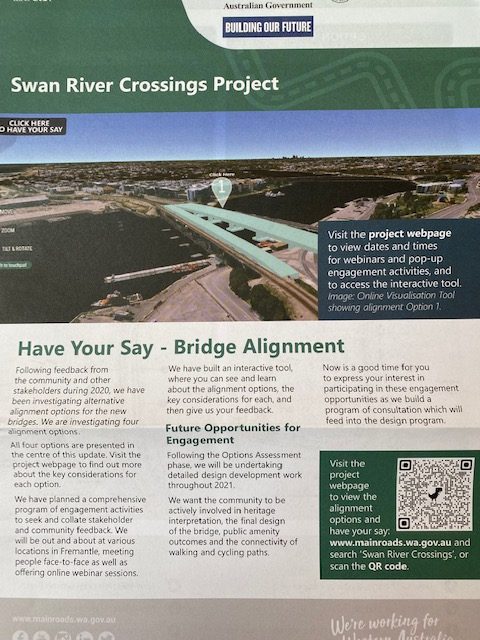 At a Forum on 11 May 2021, community representatives, including your editor, Michael Barker, were invited to comment on four alignment options presented by the Fremantle Bridges Alliance. There was no option that took the bridge further west than the existing rail bridge. Plainly, many community participants remained concerned the options offered were limited and failed to account for the bigger picture, especially if the commercial port facilities at Fremantle harbour are to be removed to Kwinana.

Here is the latest Media Release responding to the Alliance’s options issued by The Fremantle Better Bridge Alliance (FBBA), which represents the combined views of the Better Bridge Alliance and the North Fremantle Community Association campaign for proper and meaningful consultation concerning the future of the Swan River road and rail crossings, and of which your editor is a member.

The community’s Fremantle Better Bridge Alliance (FBBA) was impressed with the thoroughness of the investigation of alternative crossings, in particular those to the west of the Traffic Bridge. Of these, FBBA considers that Option 1 would have the least adverse consequences for Fremantle and North Fremantle.

However, the FBBA is disappointed that not one of the options addresses its key concern of consideration of the bridges’ roll in the long-term future of the region.

“Without addressing the regional planning context in concert with the community, we cannot possibly build the best bridge (s) for the next 100 years” said FBBA spokesperson Rebecca Clarkson.

“Whilst we welcome the government’s response to community concerns about the bridges, we remain resolute that comprehensive regional planning for the Leighton Peninsula should precede the design / construction of any new bridge, and should take into account:

· the future of the 180ha of land in North Fremantle when the Container Port operations move to the Outer Harbour;
· given the State Government plans to transfer Container Port operations to the Outer Harbour in the next decade, efficiently managing port operations sustainably in the interim, with minimal impact to the community;
· seriously questioning the need to spend $80 million to add more rail bridges to service a container port with limited life; and
· facilitating the safe movement of pedestrians and cyclists within and between the Fremantle and North Fremantle communities.”

Whatever is finally decided on the alignment, the FBBA key design considerations are that:

· the quality of bridge and public space design should be exceptional;
· pedestrian and cyclist connections into and out of Fremantle are world class and prioritise beauty, efficiency and safety;
· heritage interpretation is of the highest quality; and that
· the community is involved in the design process going forward.’

It’s a bit hard to navigate this Options website. Click on What’s Happening link, and after reading the intro box and minimising it, go to Options in the menu items on the right. The 4 Options should appear at the bottom of that list.

Your editor’s view on options offered

If you have to vote for one option, your editor’s view is that Option 1 seems the best as it takes the new bridge as far from the North Fremantle residential apartments area as is possible under current constraints.

But as explained above, and as the Options website emphasises, at this stage the question is alignment of the bridge. Design and place-making issues come next.

Some of those design considerations are mentioned above in the FBBA media release.