Places I Love – The Horizontal Falls

It’s a bucket list thing to do – visiting the spectacular Horizontal Falls, and I did during a recent visit to Broome. There is no road access to the Horizontal Falls. You can view them from the air by scenic flights from Broome and Derby all year round.

Or you can choose one of the several tours available: half day, full day tours and overnight stays – flights on helicopters, seaplanes and small jets and boat trips on jet-boats and bigger boats. I chose a full day tour by plane and boat to explore one of the Kimberley’s greatest natural wonders. 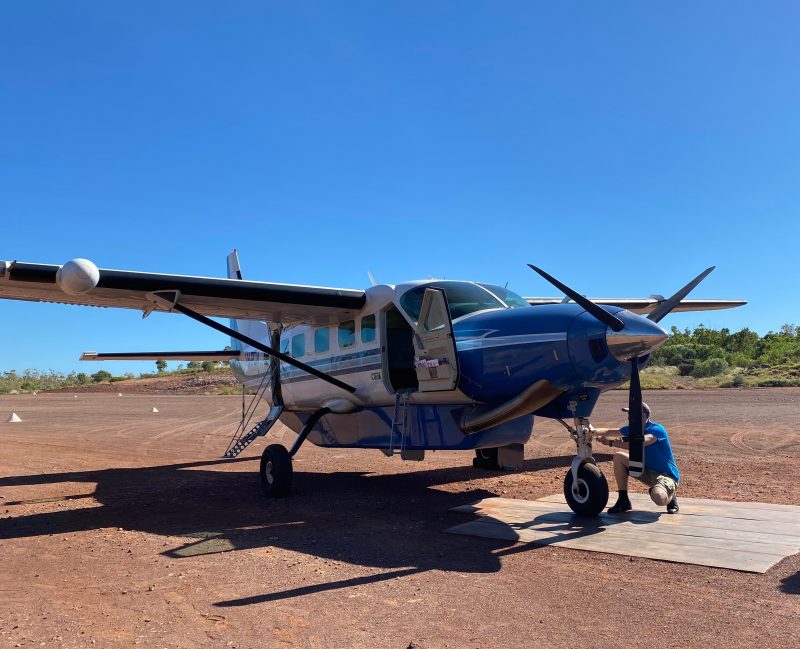 From the moment I buckled into the co-pilot’s seat, the adventure got better and better. Our pilot Mitch flew us in a 13-seater Cessna Caravan North-East up the coast from Broome and the Dampier Peninsula, then over Cape Leveque. I had a bird’s eye view of the massive tidal plains, the rugged McLarty Ranges and the thousand islands of the Buccaneer Archipelago. 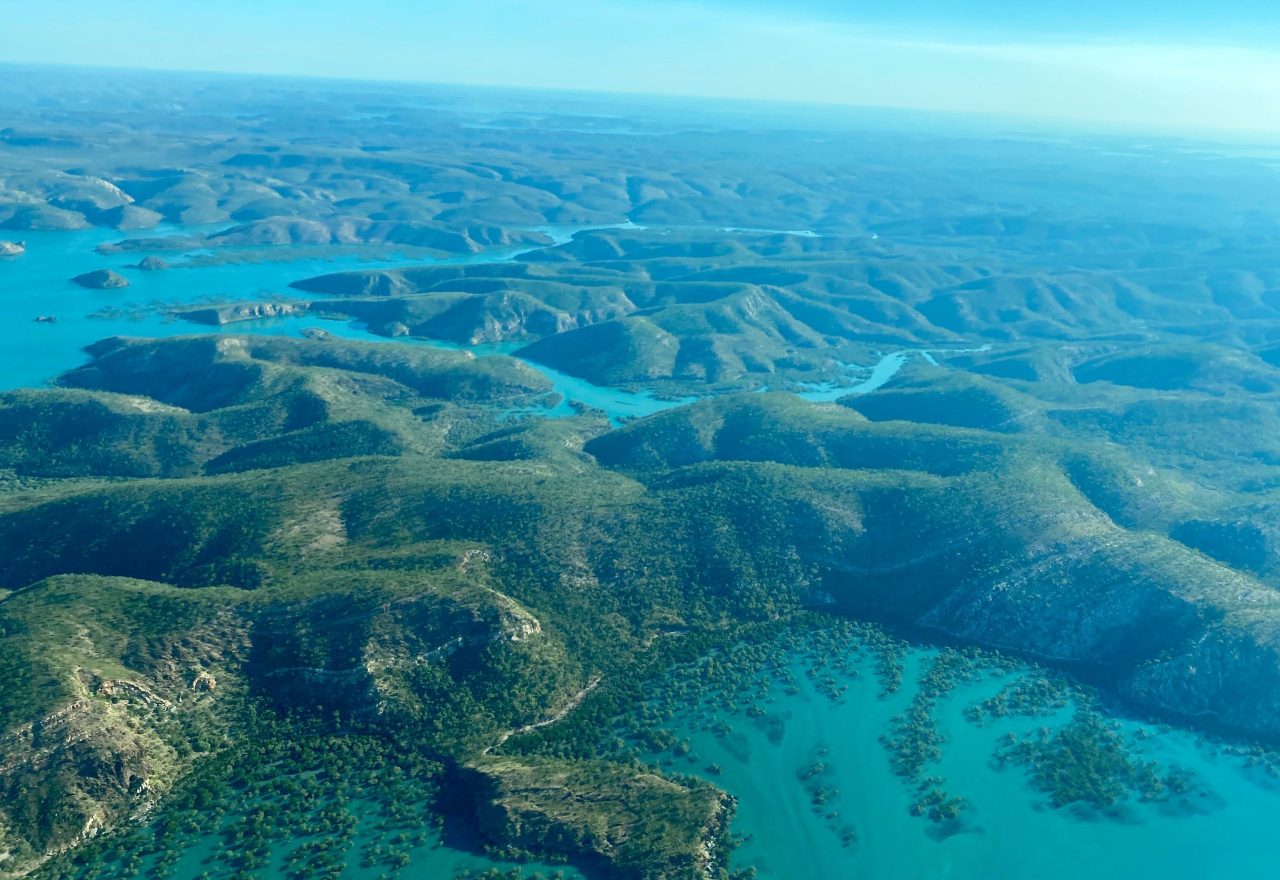 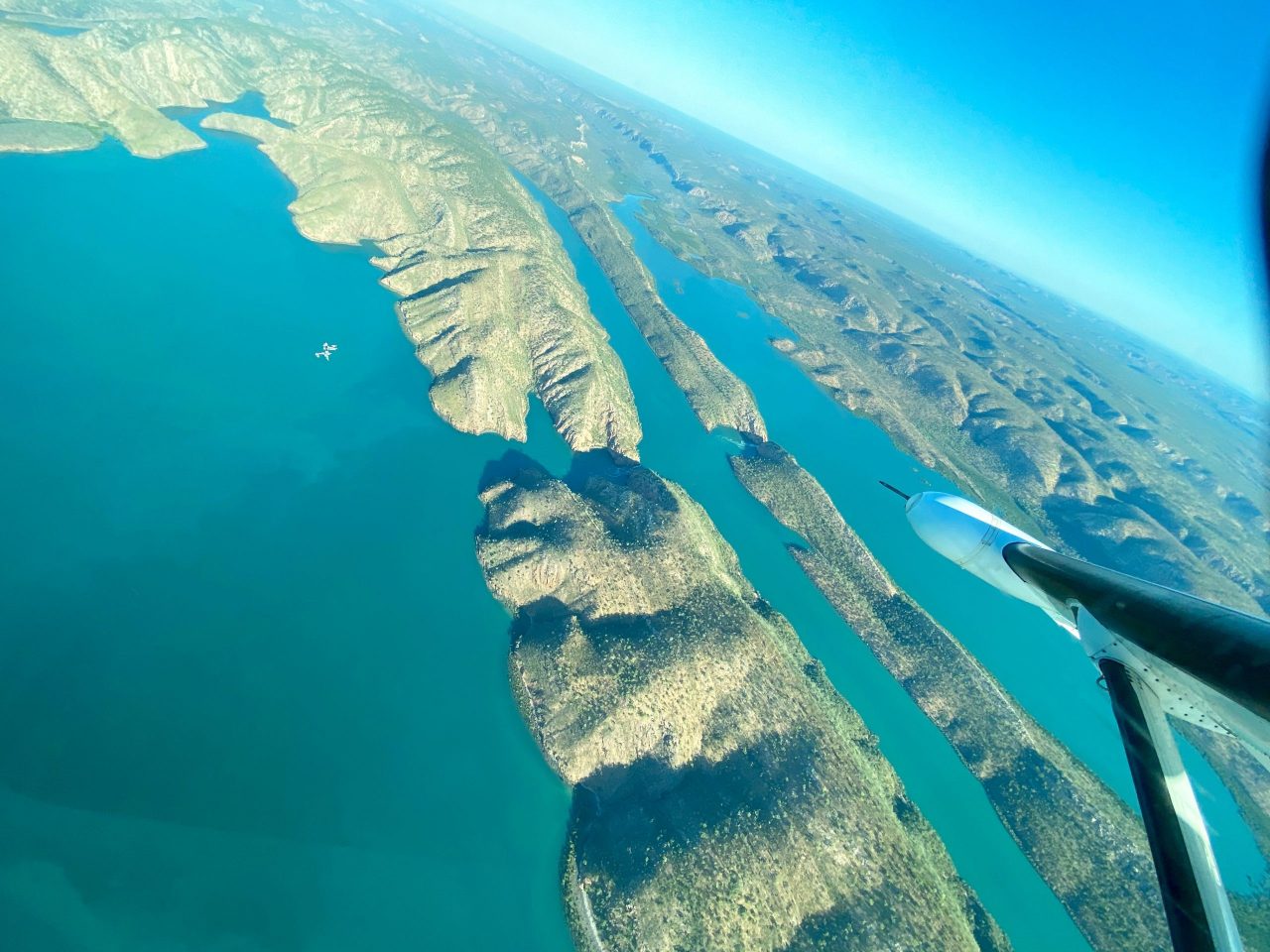 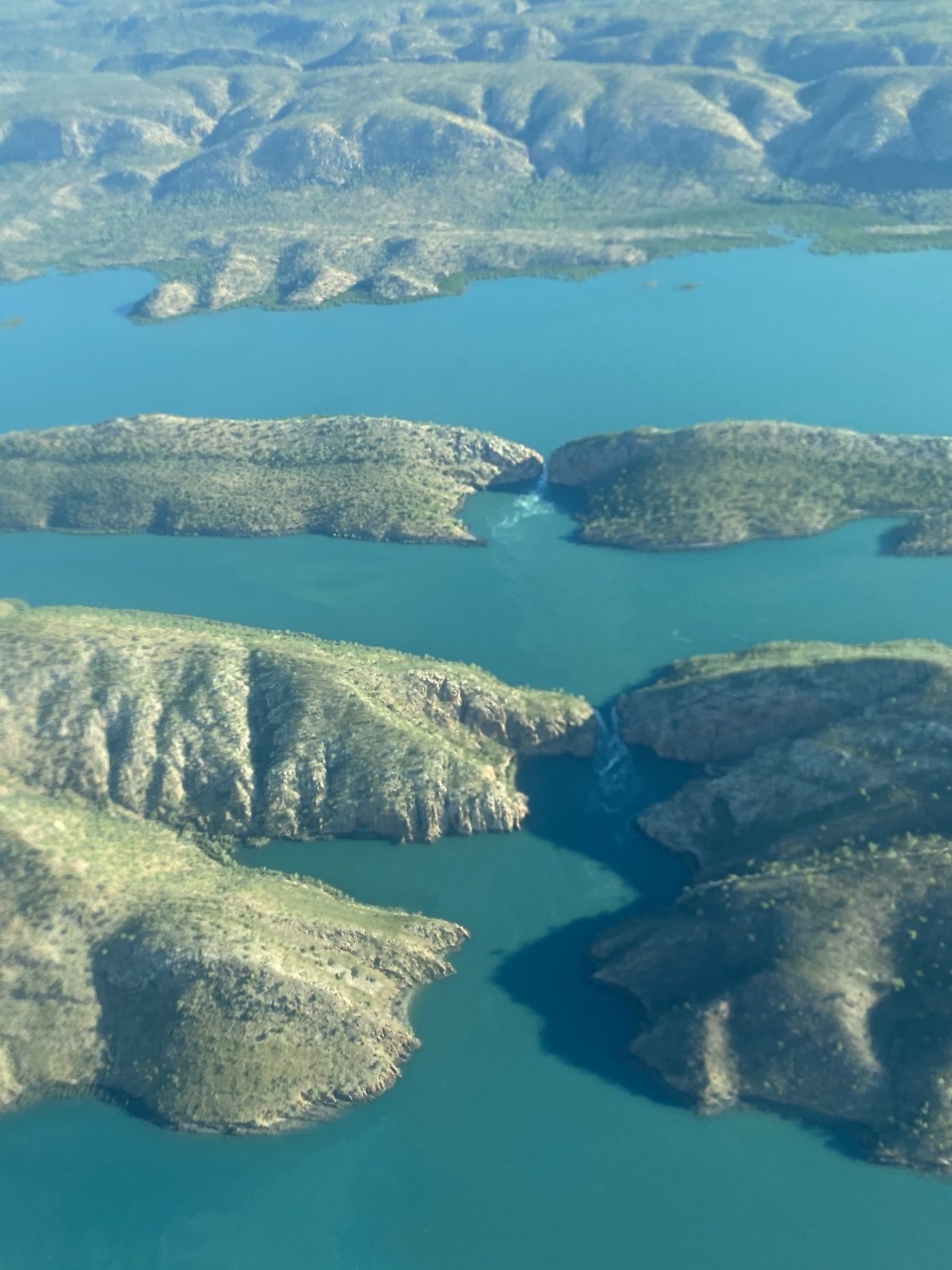 Both the Dampier Peninsula and Buccaneer Archipelago were named after William Dampier, a privateer and buccaneer who explored this area in a ship called The Roebuck in the late 1600’s.

We touched down on Cockatoo Island. Alan and Eileen Bond built a luxury resort on the island in the 1980’s. The chalets were painted candy pink and were an exclusive haven for wealthy holidaymakers. 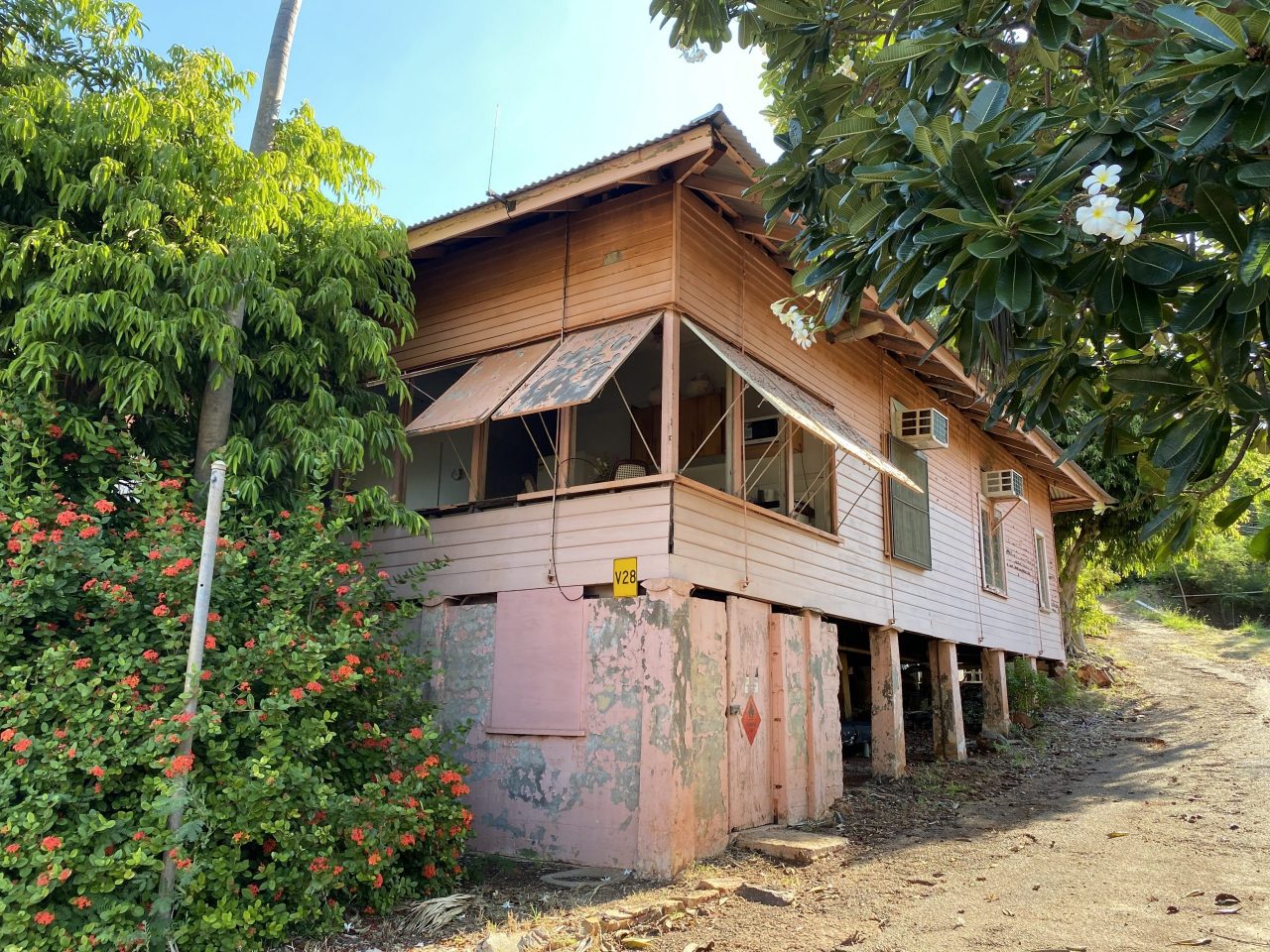 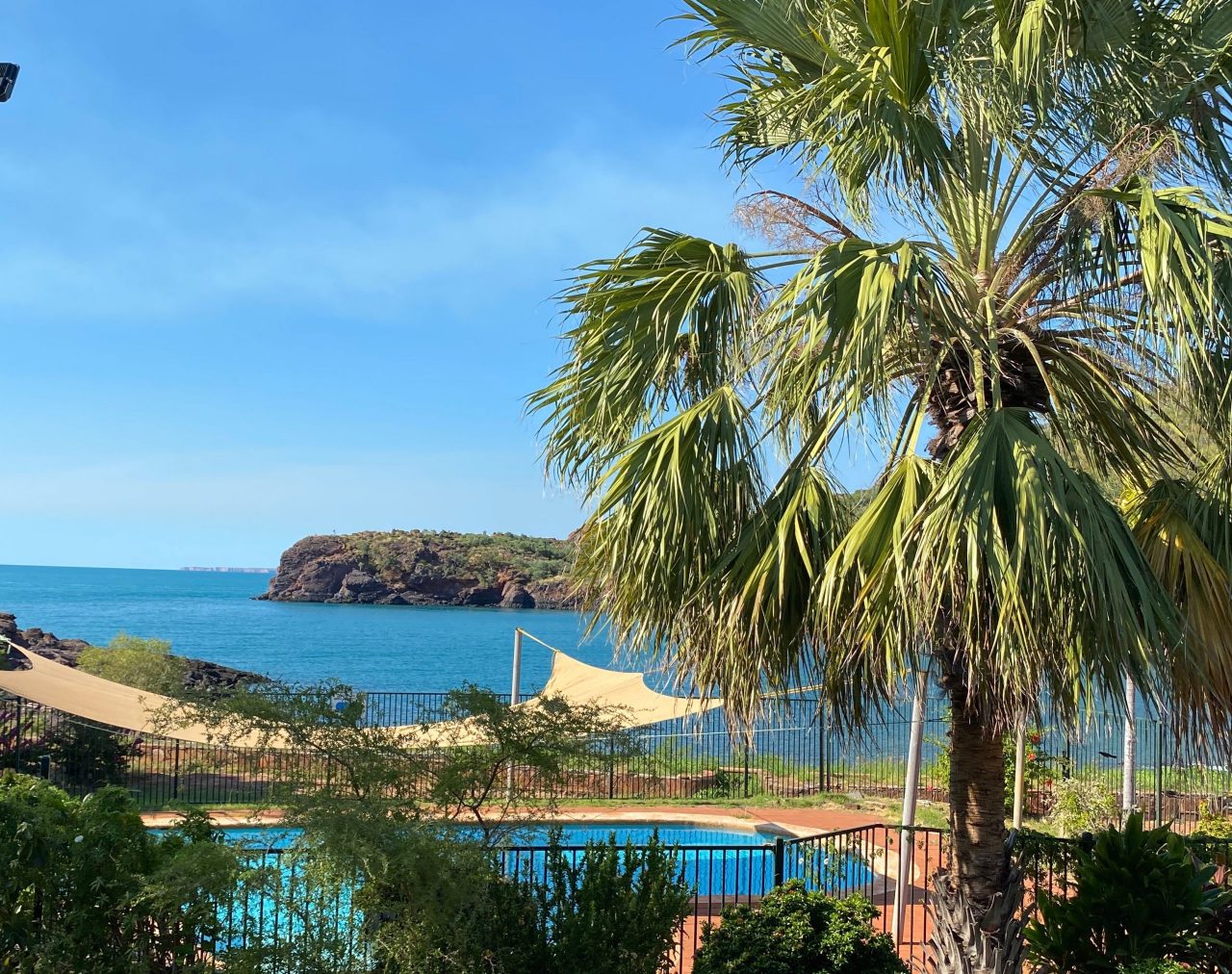 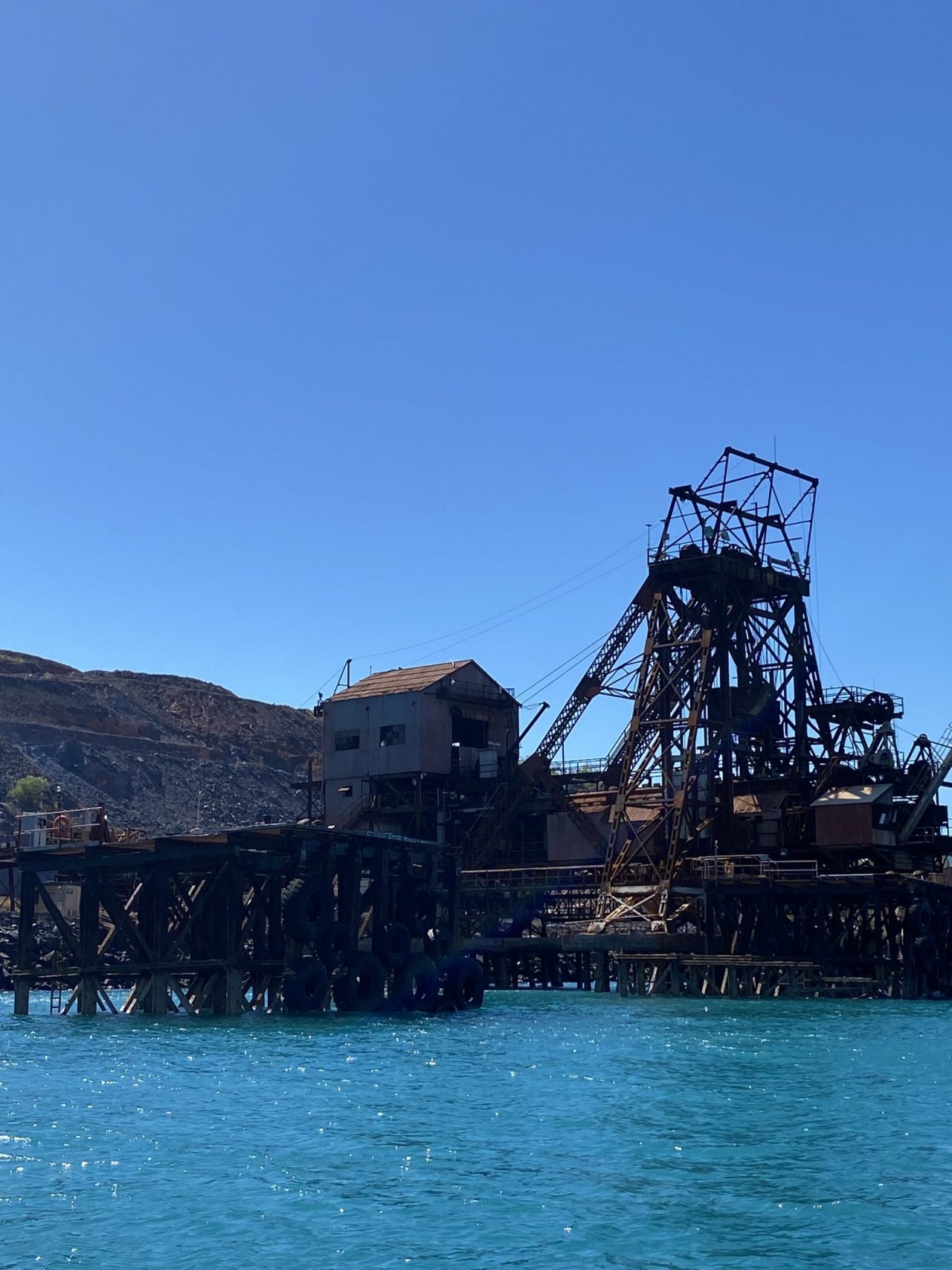 When the Bond empire collapsed in the 1990’s, Cockatoo Island Resort was reclaimed by the bank and sold. The resort reopened in 2019.

Cockatoo Island was mined for high-grade iron ore from 1951 until 2015. The mine hangs off the side of the island and is separated from the ocean by a seawall that allows mining to occur below sea level.

A big-foot bus took us to our 750hp fast boat. For the next two hours we cruised through the Yampi Sound to Talbot Bay. The water was an amazing milky turquoise colour contrasted against the deep red cliffs and bright green foliage.

We cruised by towering red and orange cliffs, streaked with different layers of rocks. Two billion years ago (yes, billion) there was a period of topographical upheaval, with continental collisions. The deep sandstone was bent, buckled, folded and scrunched like paper. These cliffs and rock formations are almost half the age of the earth. 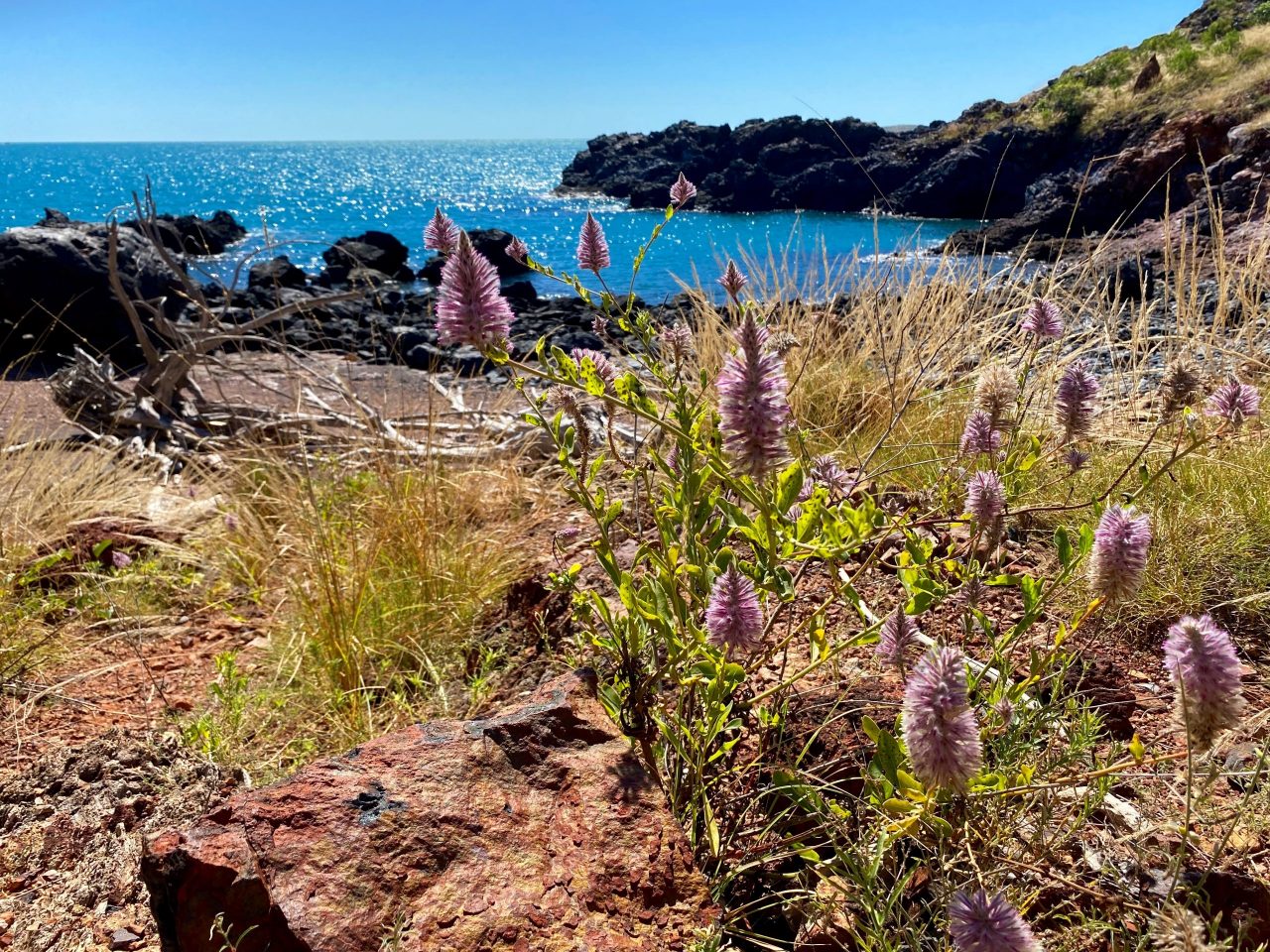 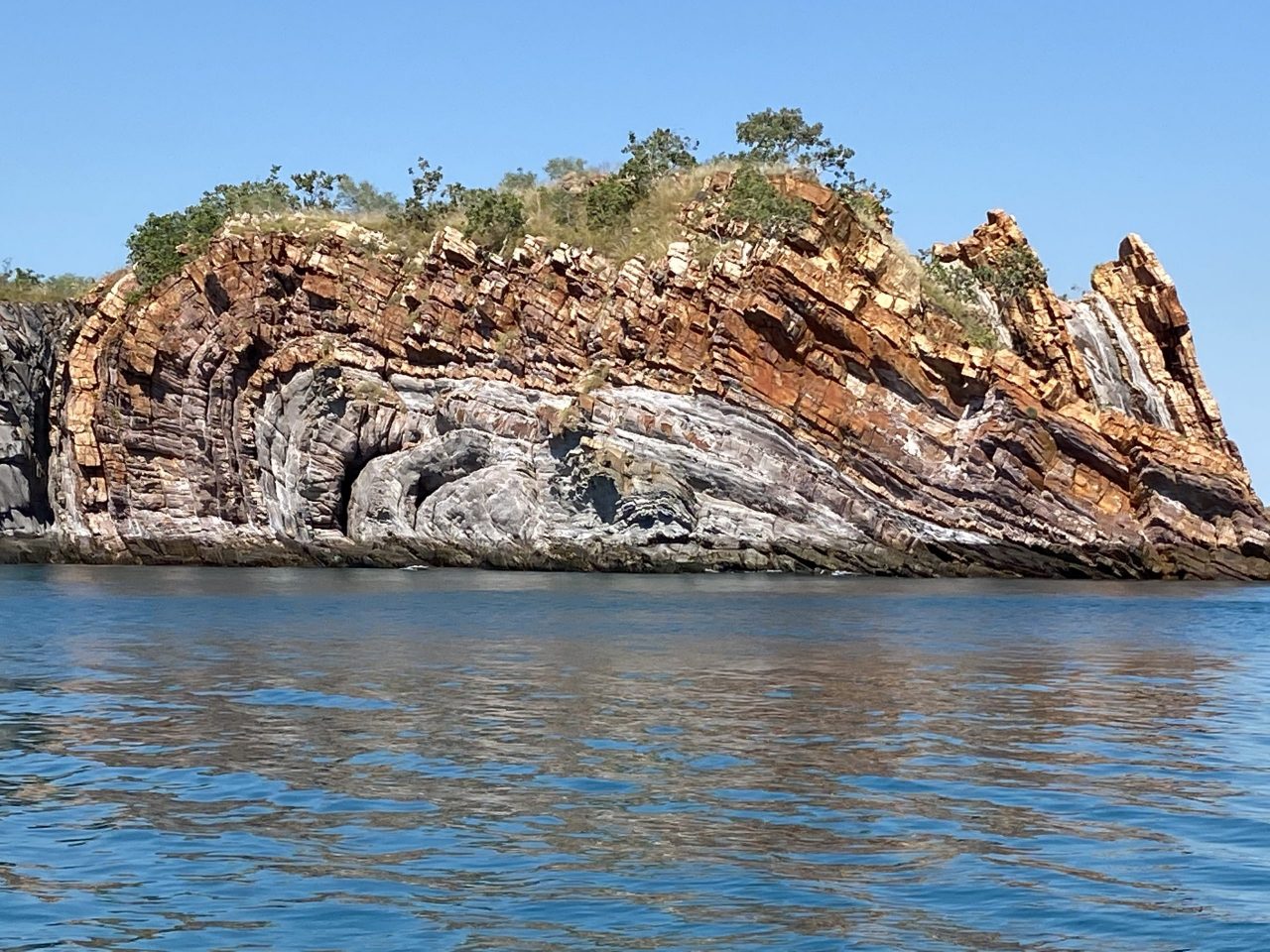 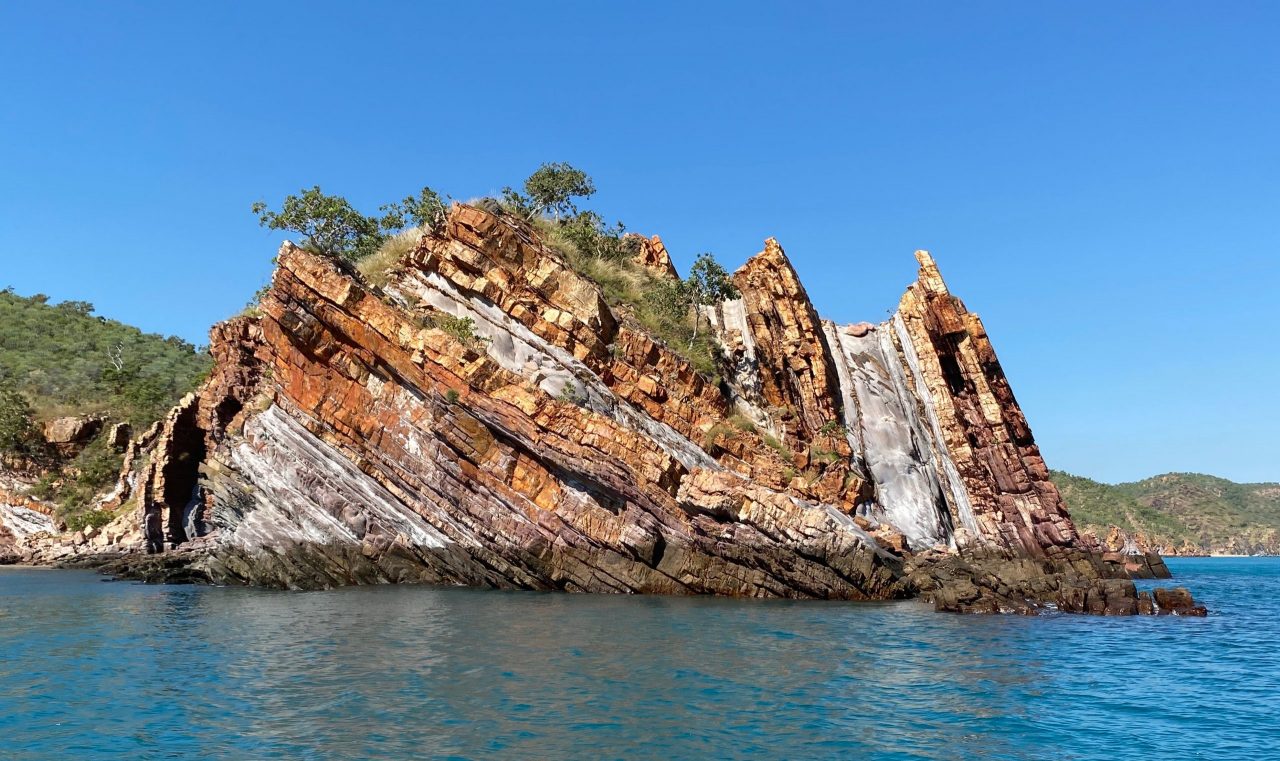 Ospreys soared overhead and we spotted the odd saltwater crocodile. Our guide Hayley told us about geology, the environment and the ancient Aboriginal culture of the Kimberley.

Talbot Bay felt like a lagoon surrounded by cliffs and islands. The Kimberley has one of the world’s highest tidal shifts – up to 12 metres. The Horizontal Falls are created when the very high tide shifts through two gaps in the McLarty Ranges. The twin coastal gorges are situated on two parallel tongues of land, 300-metres apart.

The massive tidal movement builds up on one side of the narrow cliff passage – pushing through at rapid speeds to create the appearance of a vertical waterfall. The falls reverse daily when the tide turns and flows in the opposite direction.

It was Spring Tides so millions of litres of seawater were surging through a narrow sea gorge every second. Our skipper Ben took us to the mouth of the Horizontal Falls. We donned lifejackets before we powered through the widest gap with 200-metre rust-red cliffs on each side. 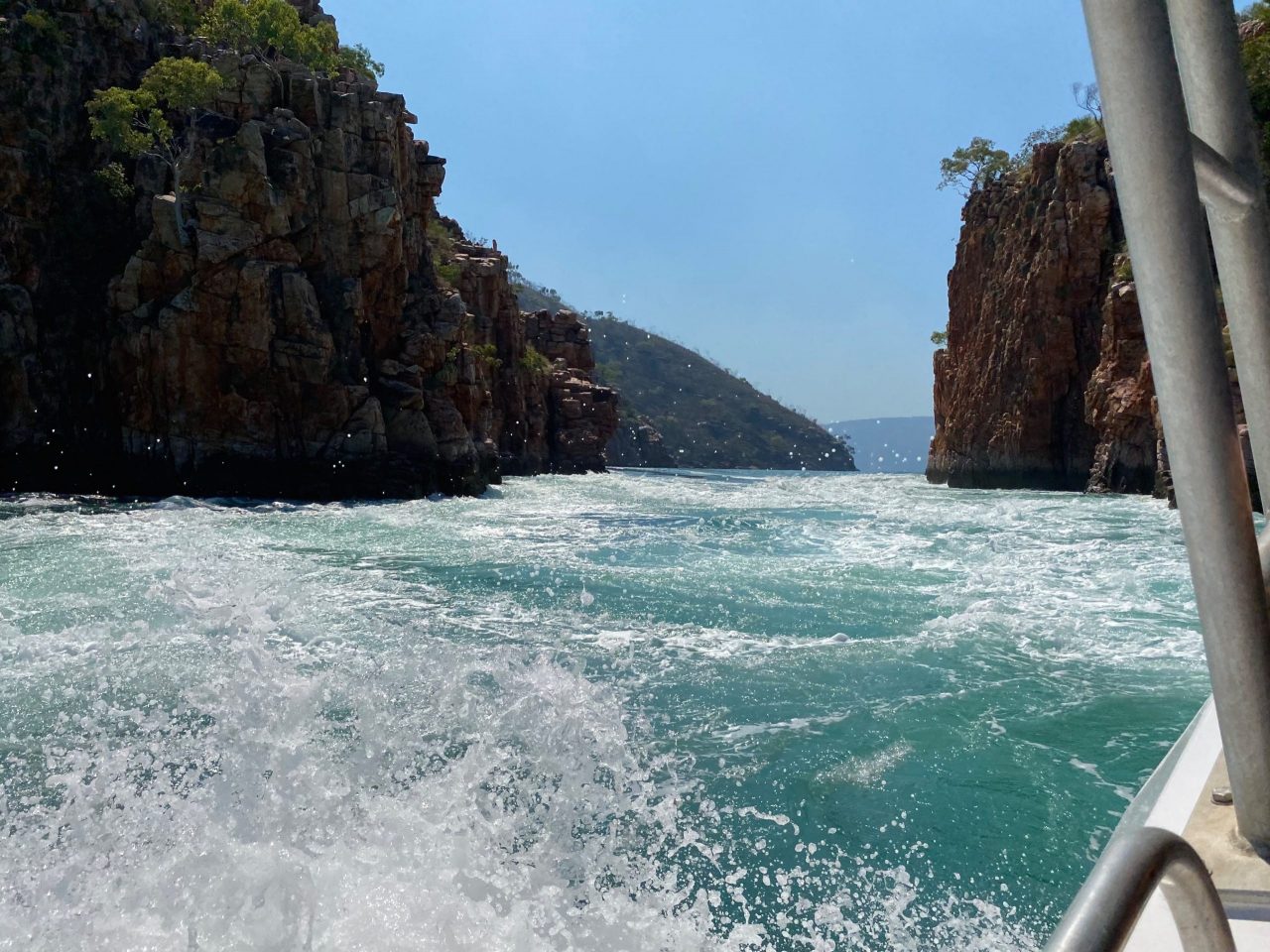 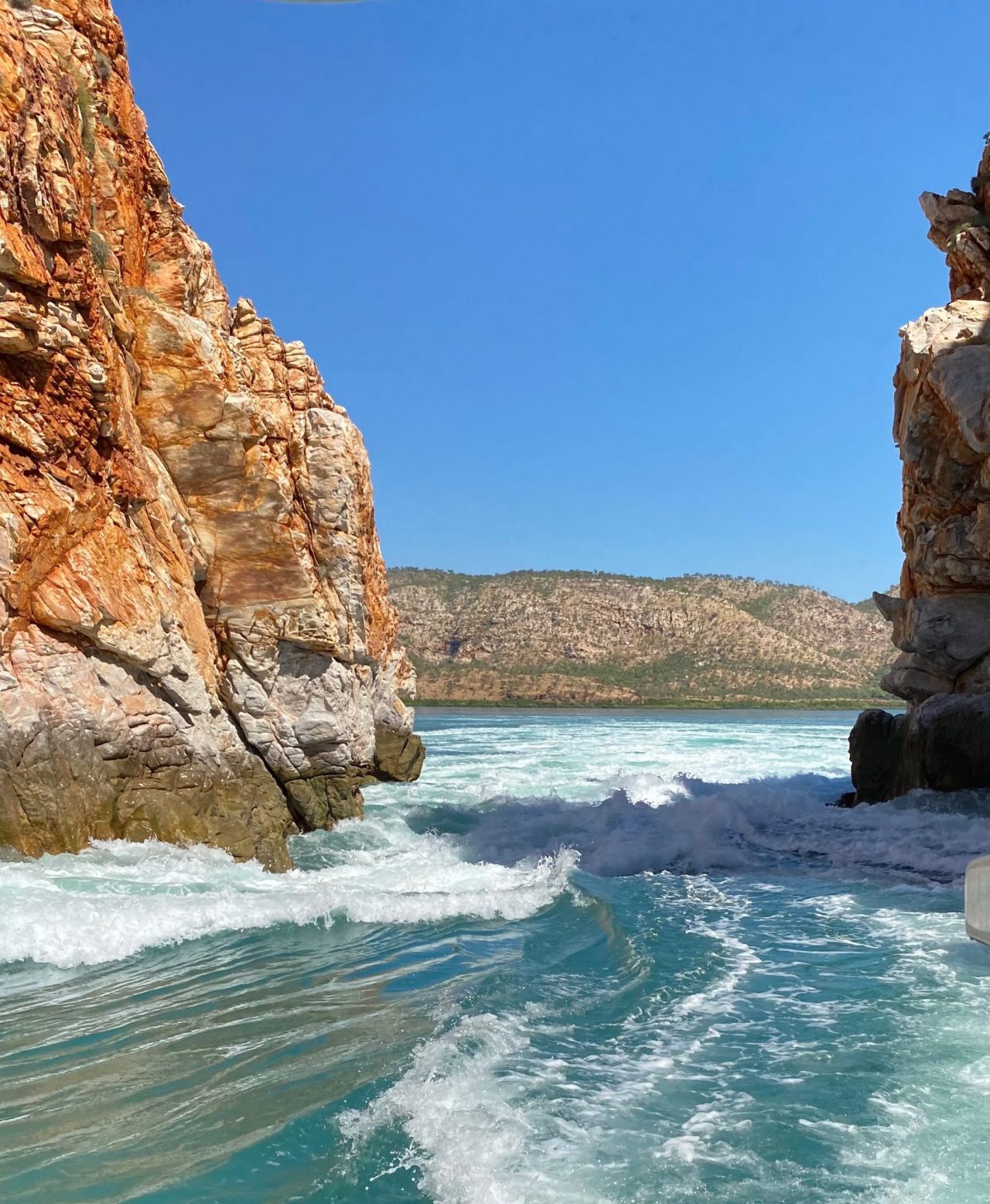 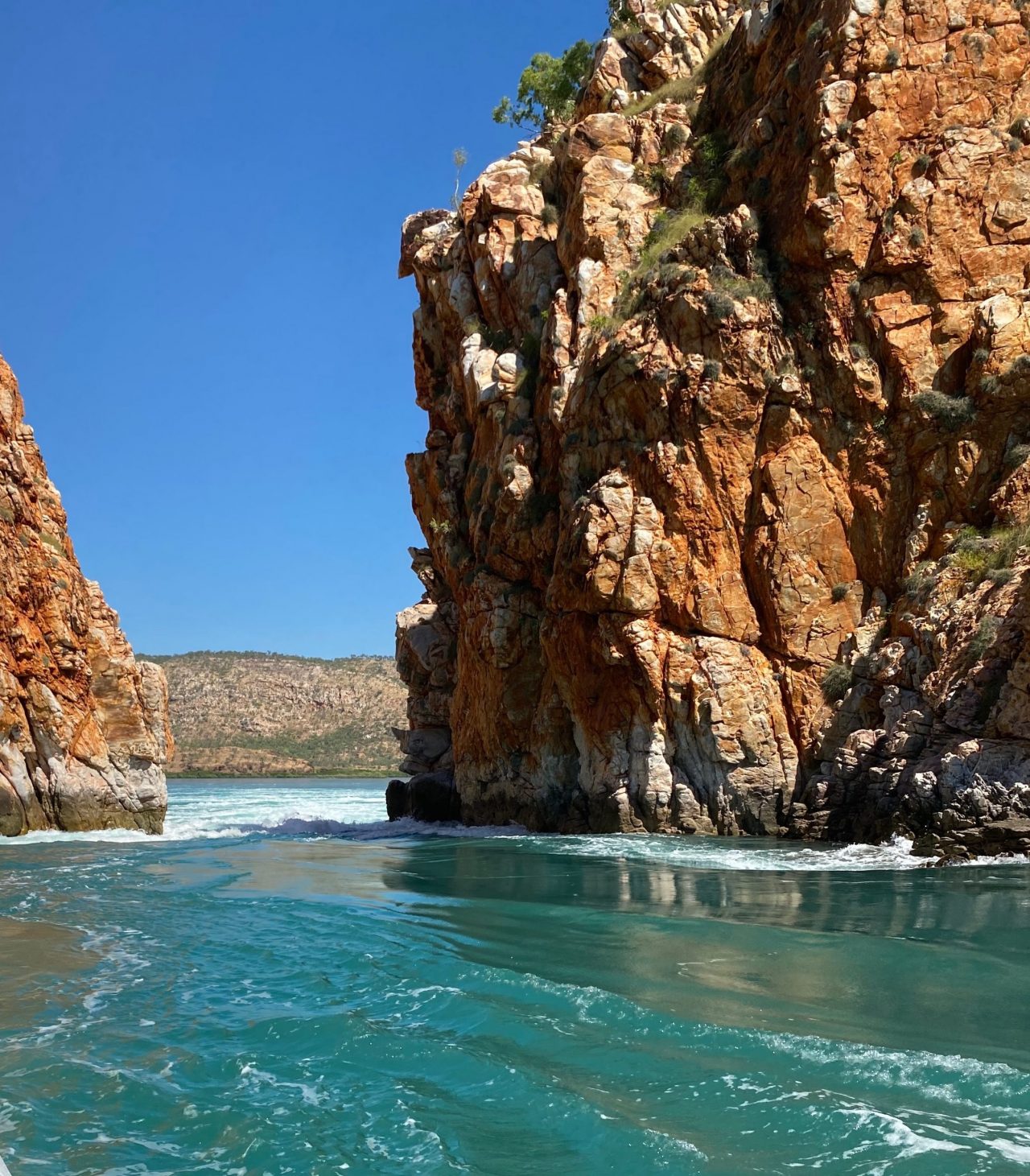 We literally hurtled downhill at speed with water surging and bubbling about us. It was too dangerous to go through the narrower 10-metre gap. But we travelled back and forth several times with and against the tide through the 24-metre gap.

The Horizontal Falls are located within the Lalang-garram/Horizontal Falls Marine Park which is jointly managed by the State of WA’s Department of Biodiversity, Conservation and Attractions and the Traditional Owners of this area, the Dambimangari (Worrara) people.

Aboriginal Australians have lived in the Kimberley for around 41,000 years. The traditional name for the Horizontal Falls is ‘Garaangaddim’. This word, from the Worrorra language, means ‘floating water’ – referring to the way the tide makes the water move like a bird. 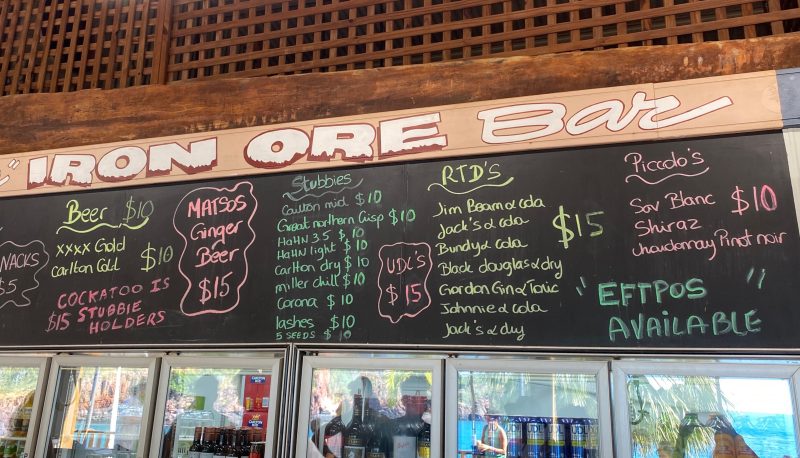 After lunch, we cruised through mangroves, untouched creeks and islands fringed with coral. Then back to Cockatoo Island for a drink at ‘The Iron Ore Bar’. As the sun was setting we flew low over the Horizontal Falls where the striking Pentecost sediments tilted vertically and were eroded to allow the twice-daily flood and ebb of seawater.