A tale to tell of Old Hilton Park

Pathika is steeped in stories about Fremantle and its history. Two streets in South Fremantle, Louisa and Florence are named after her great aunts. She is also passionate about how places change and evolve over time. Hilton is a good example. Once, Hilton Park, a post World War 2 ‘garden suburb’, Hilton is now very much part of the new, green Fremantle of the 21st century. Here Pathika explores this theme with her personal and poetic account of the role Grigg Park plays in the life of the Hilton community.

Grigg Park is a great little park, bounded by Grigg Place, Snook Crescent, Lynch Place and Oldham Street in Hilton. It was established by the State Housing Commission in the late 1940’s/early 1950’s as part of the original subdivision that is the ‘Garden Suburb Estate’ of Hilton Park.

There was then a requirement to set aside 40% as Public Open Space in a design plan that was based within the contemporary ‘Garden Suburb Development Principles’ that originated from the UK in the late nineteenth century. Since then, the borders to Hilton have changed several times due to electoral boundary reconfiguration. Beaconsfield has gained much.

Grigg Park has seen vast change over 80 or so years of suburban settlement. The most recent 35  have progressed some significant upgrades. It has been listed on the Municipal Inventory of The City Of Fremantle since 2000.  Its management specs The Burra Charter owing to the significance of its heritage content. The park was also placed onto the State’s Heritage List in 2007.

Its area of 8617 square metres hosts an array of human traffic and remains in good faith to each who is wanting a different time, place, reason and all that it manages to provide with its many trees, play and picnic facilities, open play spaces and some other quiet spots where you can sit with a tree in the shade and, with the sun at your back, look over old times and new. There is also a wee bit of a valley that calls to the remnant low ground, hunting and food gathering place that would once have been this valley. 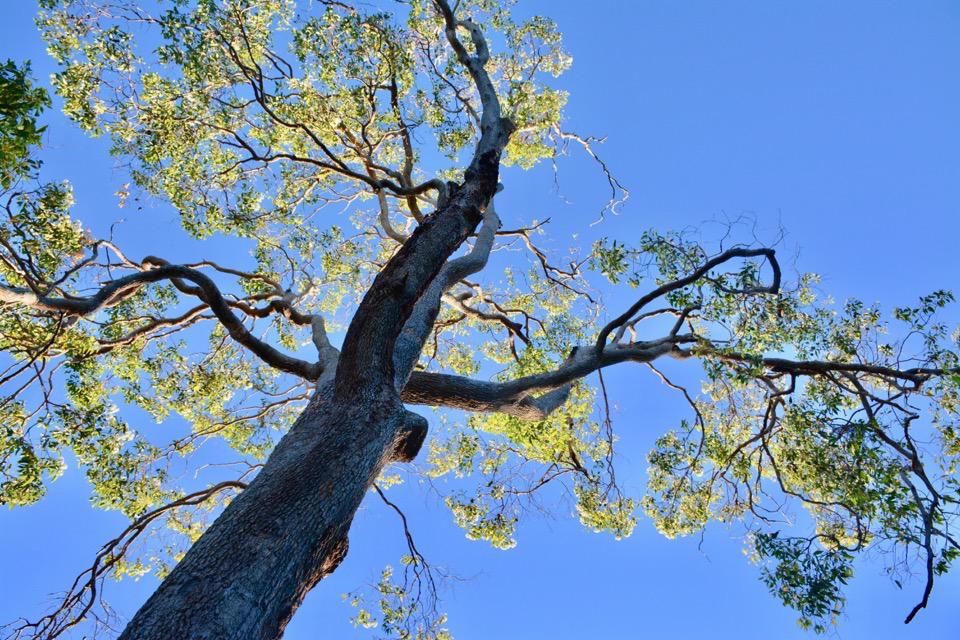 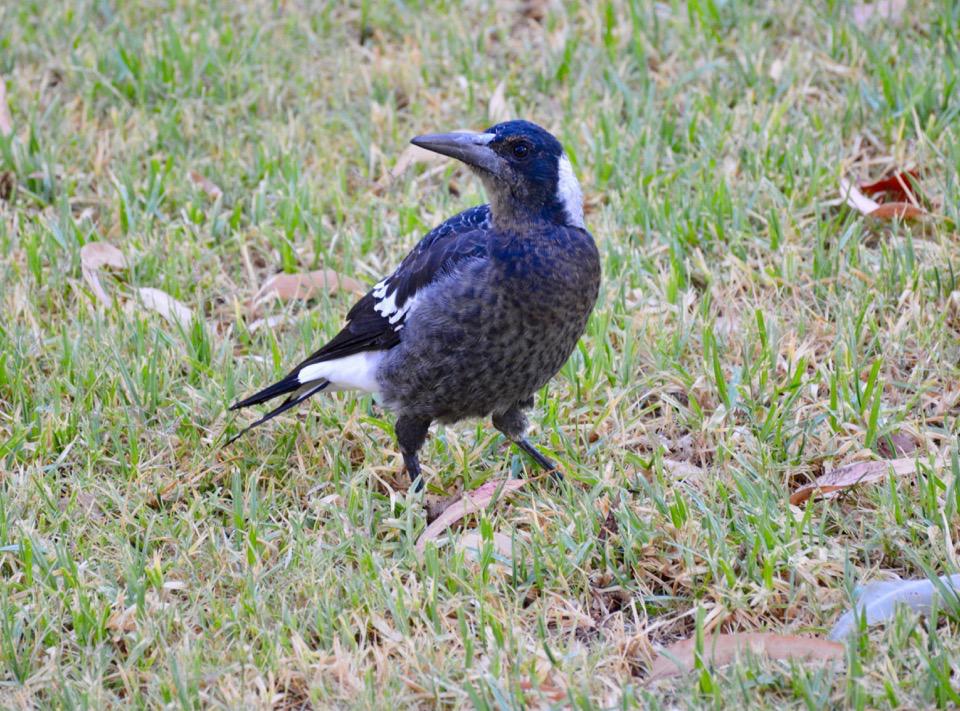 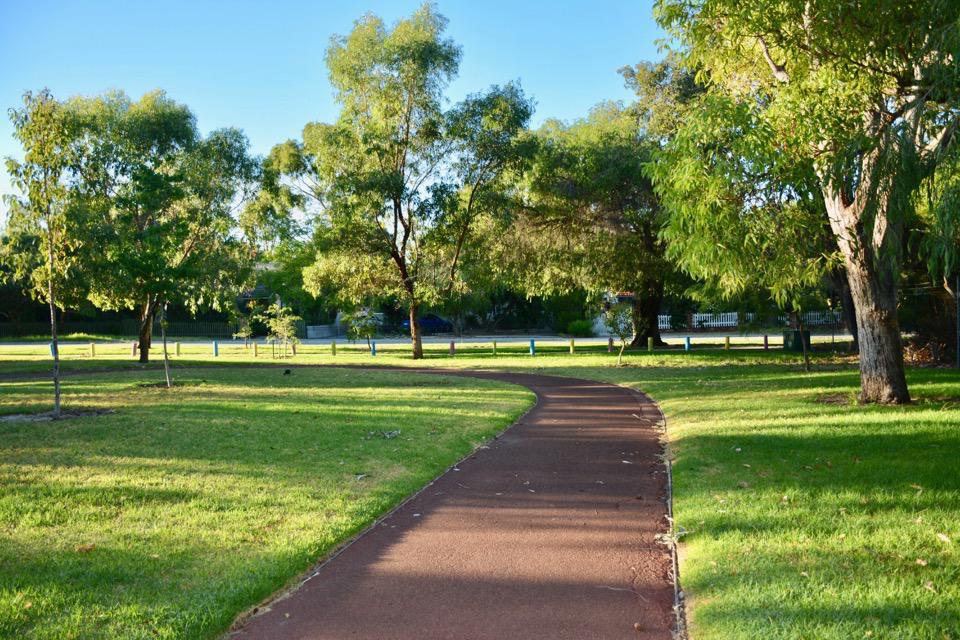 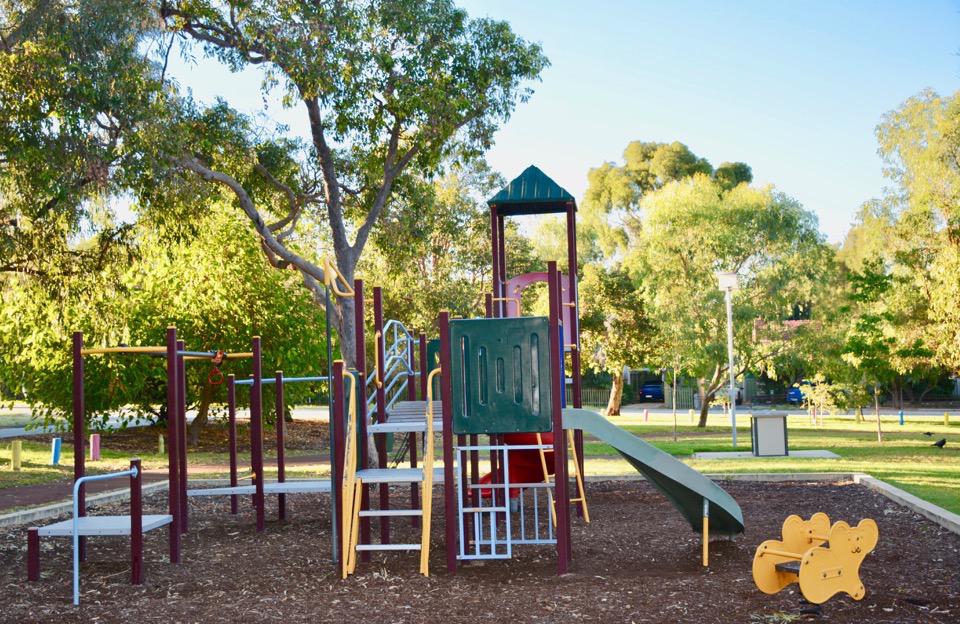 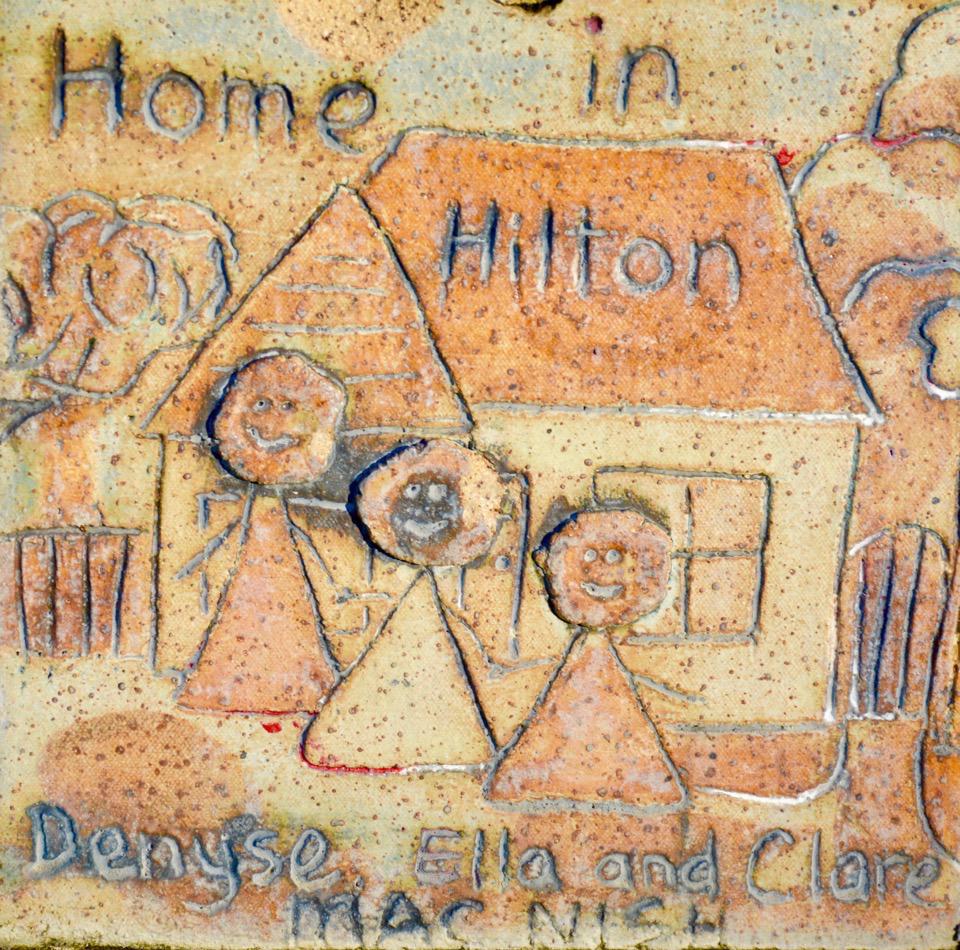 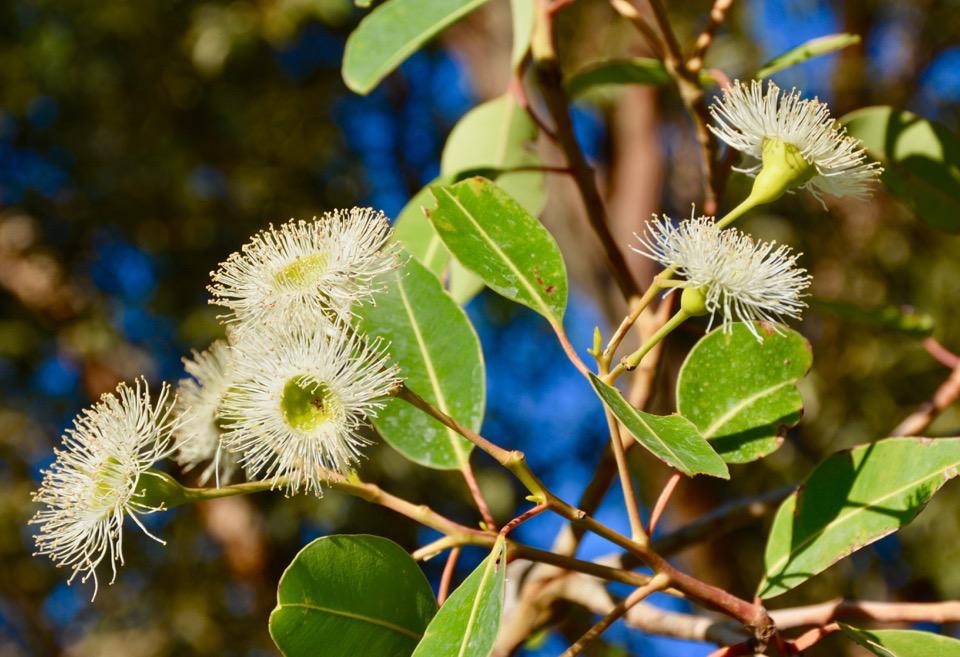 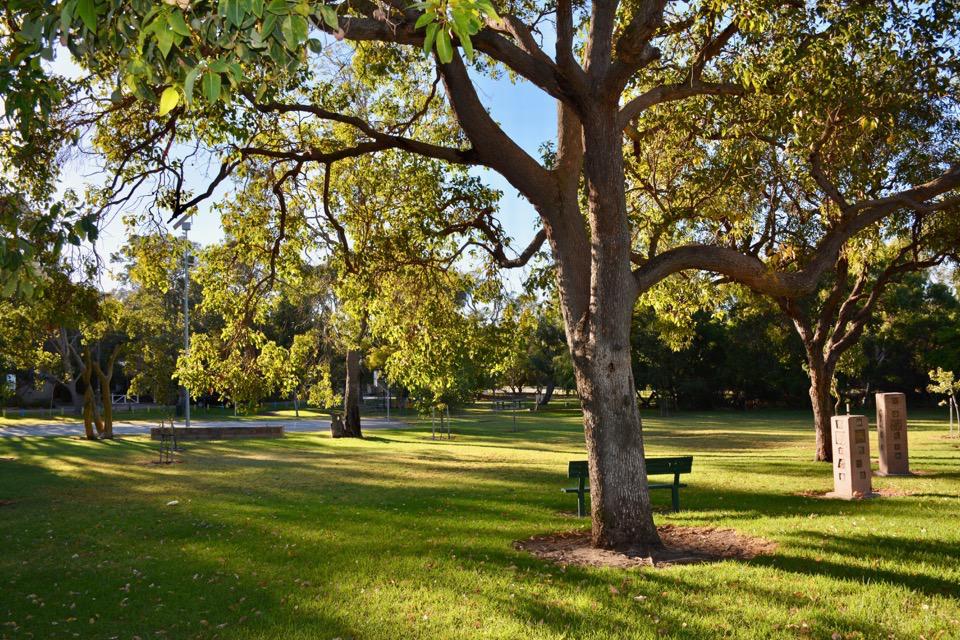 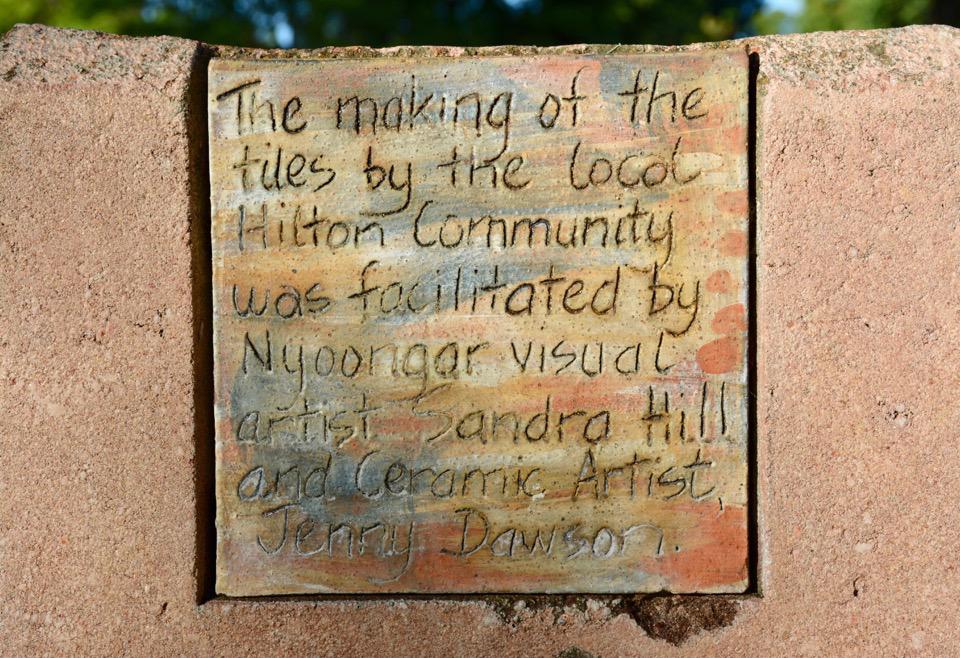 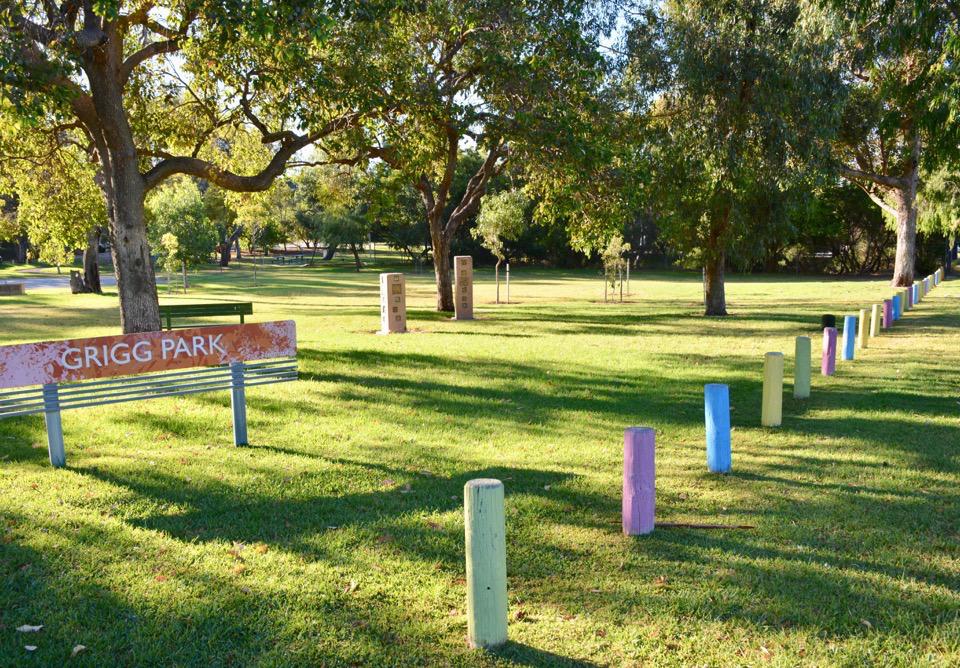 When I arrived in Hilton in 1990, the park was a well loved piece of ground that still had a wild bit of feel to it. A hub and a cross roads.. As it is now, it was then a real meeting place (only different). By day, ‘Buster The Fun Bus’ made regular stops for the kids of the area. There was a ‘one hoop’ ring of a basketball court with a wall to bounce against, and a cricket net. These were installed in 1980. There was also a shelter.

The demographic of the local community, the population increase and the place have changed significantly; even in my time. There once was room for travellers and people coming back home or passing through in the old way: searching for or coming to see family from afar. Or heading further afield. The park still had that bush block resonance. This used to be horse country for riders and bushmen. We live on top of the tracks of a people who went and returned and went again.

A shade house and garden were developed in 1992. The City of Fremantle supported this endeavour with food and plants. 150 local residents gathered to establish a permaculture garden and to plant trees and improve the amenities.. The mulberry tree garden remains today, in part.

That was probably around the time Bill Mollison (King of Permaculture) came to town to call in on the great movement of people who were environmentally conscious, and learning and speaking of, and cultivating according to, the values and principles of Permaculture.

So hail !!!  to those who were and are still carrying the banner for those ‘caring’ principles; for they lived and still do, many remaining and sheltering within our garden community, finding meaning in preserving the possibilities of sustainable living.

We live alongside many – gardeners, scientists, designers, educators, naturalists, oceanographers – who have dedicated their lives and themselves not only to this local habitat but also to the environmental state of Western Australia within its’ global niche.

This place has oft been said to be one of the world’s best kept secrets. To uphold true value for the environment that sustains us, and to find a way with it is a true challenge in life. Our small parks and plots are what we have. This is ‘it’ and ‘we’ are they.

The sump has some of the most lovely old flowering gums and is an area of safe and quiet refuge, particularly for birds and native fauna during breeding/nesting time.

One hopes that it and other sump areas like it remain as vestige/remnant areas protected for the sanctuary wildlife and flora and do not become yet another good ideas/pave paradise project, to become tamed and taken from the many who have moved here to value and uphold this ‘garden suburb’; to live in a democracy space where flora and fauna are protected.

By now, there are only a few remaining remnant trees in the wider Hilton area that carry the name ‘Banksia Woodland’ which was once the habitat of Tuart and Coastal Jarrah trees.

It is a sad and indelible experience to have witnessed trees ‘going’ in the name of ‘sharing arable land and the air that we breathe, as populations expand to accommodate and encompass the next waves of many new immigrants as they learn about the place that we hope to sustain and share as a community together.

Today we rely on the vibrant community resource and more and more on the dedication and expertise of trained City Staff and Council who advise, assess and moderate the line on all fronts. It is a great thing to be able to support their expertise. 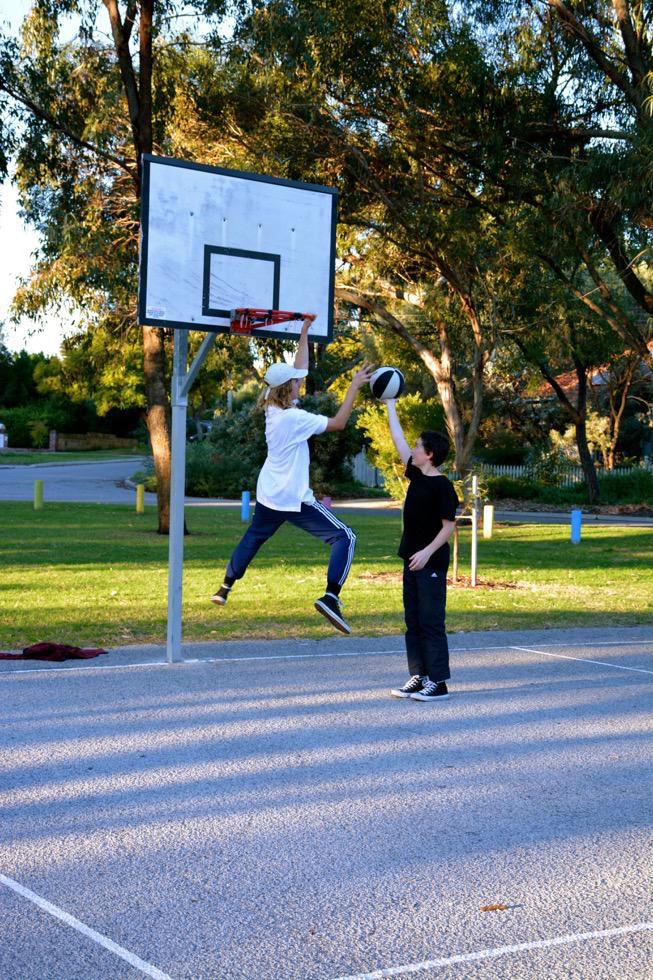 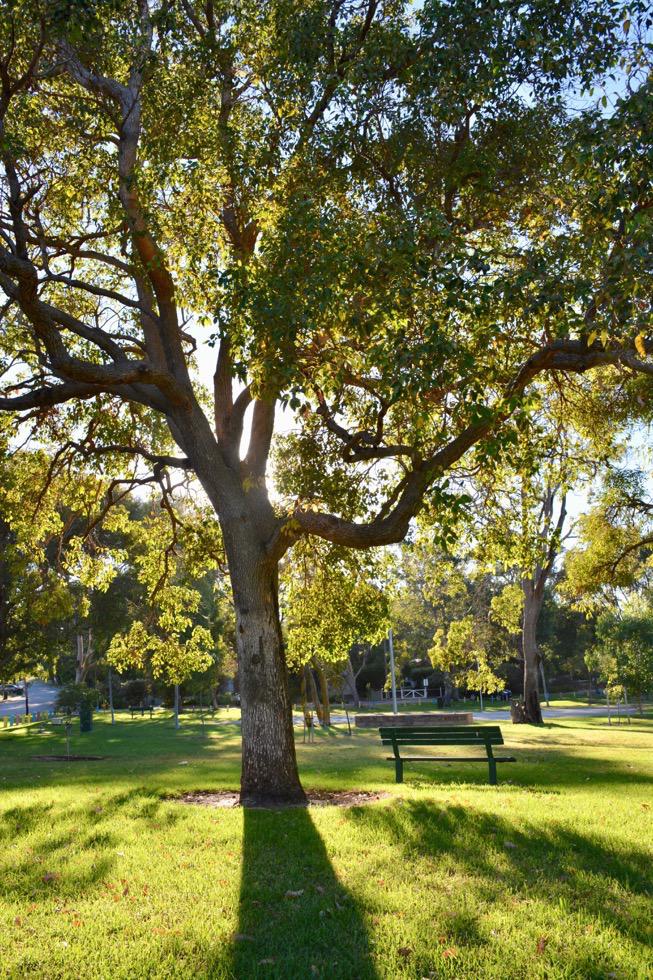 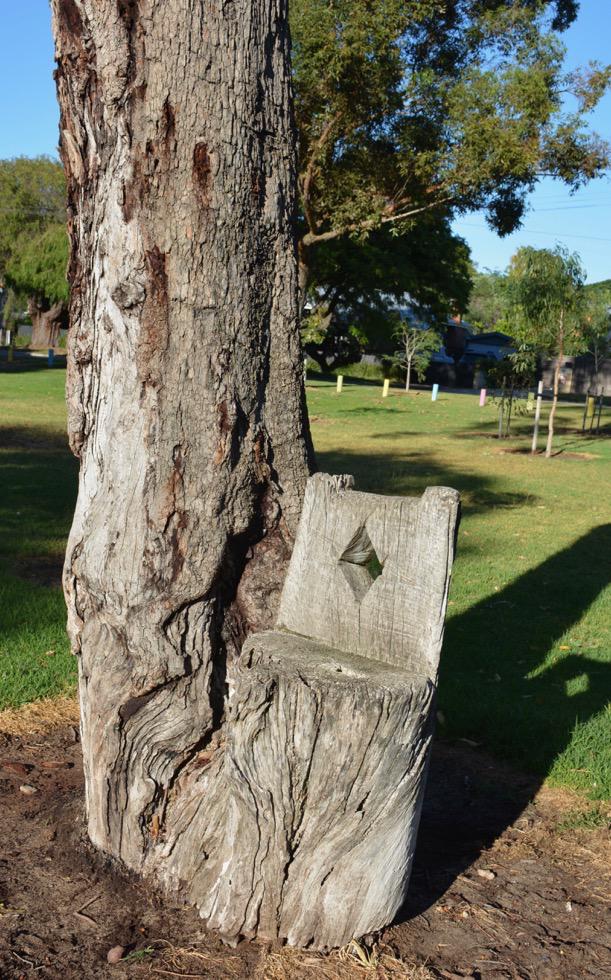 The beginnings of the more current and major upgrades were begun and achieved with great expertise by the Hilton Precinct Group; in around 1999/2000. The group negotiated with City of Fremantle Landscaping and Infrastructure Departments to achieve the plans and funding for the present kids playground and bicycle pathway, swings, picnic seats and tables, water fountain, boundary poles and solar lighting; as well as a substantial (and ongoing)  tree planting program. The Precinct Group was reformed to grapple with the future.

At the Eleventh Hour, the late and very wonderful (and ‘once of’ The Meeting Place) Penny Kordyl, who was then Development Officer of the Community Development Department of City of Freo, came to the party and designated additional funds from her budget. This resulted in further concurrent achievements.

At that time Penny was pivotal in the processes of the City as it was writing its Policy for Recognition, Conciliation and Respect. And so, that aspect of the park project was a balance and a welcome and timely ‘on the ground’ community initiative in Hilton, one that was greatly appreciated as being a  lived part of what was being workshopped by many families to be written back into the heart and soul of Fremantle.

That aspect of the project included additional trees and park bench seating in shaded areas. The basketball court was upgraded to a two-ringed marked court so a game could be played, something that brought real delight to all concerned and has been celebrated and well utilized.

A ‘sitting wall’ and totem poles were also constructed at this time and there were two Saturdays of the Hilton Precinct Community Art Project that had a focus on Recognition and Conciliation. These were facilitated in shade and a marquee by Nyoongar visual artist Sandra Hill and ceramic artist Jenny Dawson. The project saw the making and decoration of  tiles that were set into the sitting wall and totems – the intention being to give and to state family connection to the ground there.

Many old and new local families put their mark onto the tiles for the rammed earth wall, a wall also constructed by a local resident. 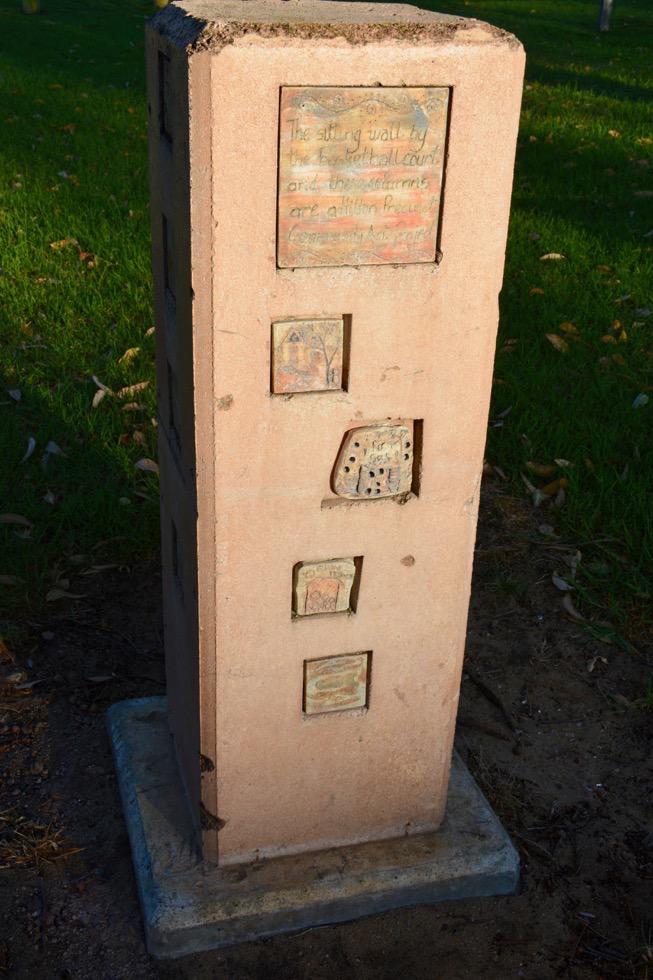 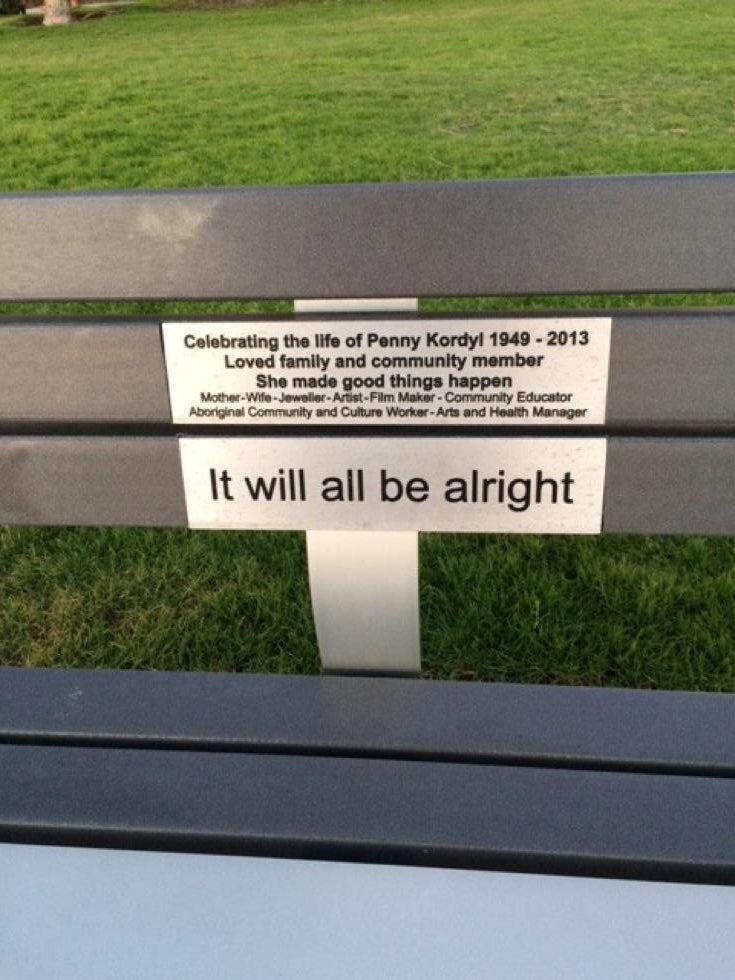 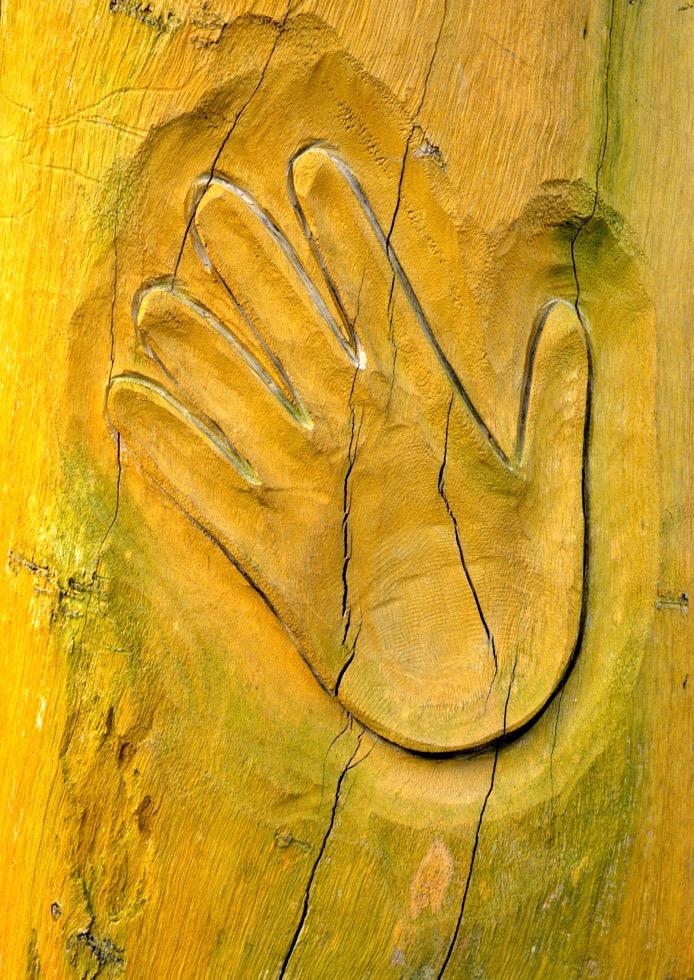 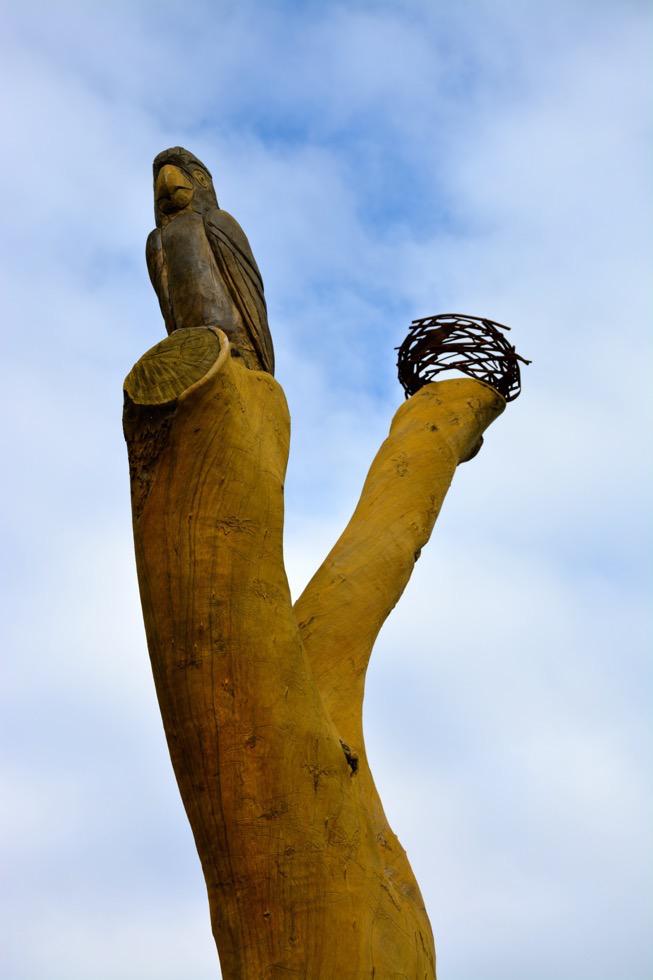 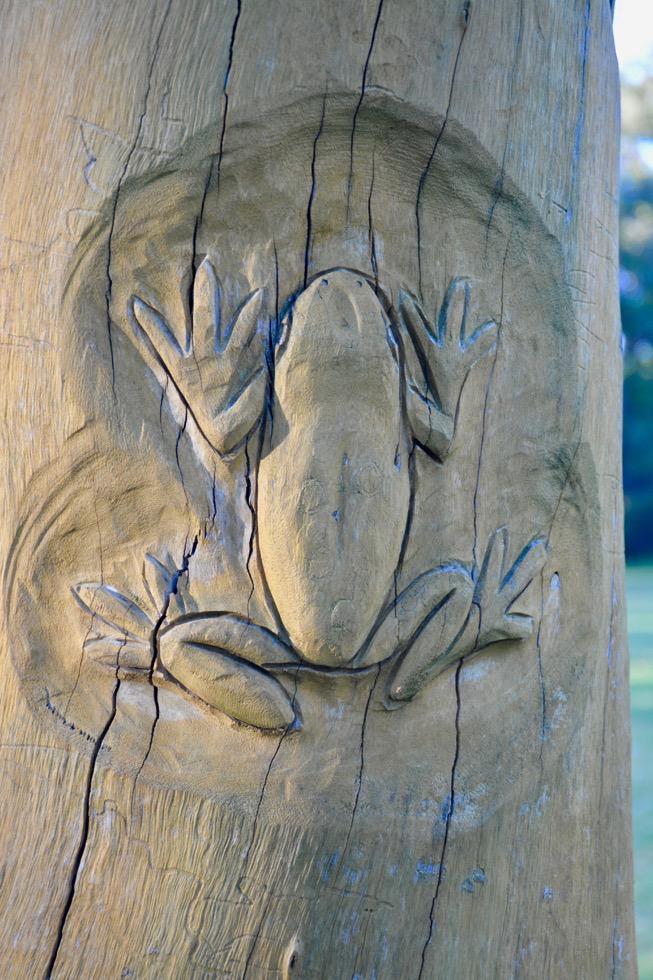 Good markings were made into the community. The City worked diligently to coordinate their services. By Opening/Celebration Day there had been a big tree planting and the trees were named to local kids and families as acknowledgement of ‘belonging’. There is a map of the trees and the names. There was food, fun and music.

The wording that Penny arrived at and that is written on the sitting wall, tell the story –

“In autumn of 2000 and in the Aboriginal season of DJERAN, we, the Hilton Community, came together to express our connection to this place. Each tile was created by a person or family from Hilton in a spirit of togetherness.”

As well as for local residents on a daily basis, the months and years since have seen some fabulous days where large family groupings from far and wide – from coast to the hills and all around – have gathered together on ‘old ground’ to eat and be together in community for the day. To bless us with the presence.

Sometimes it is just a lovely summer’s evening picnic ball game or just a bunch of kids of all ages rolling off down the hill for an hour, and back again.

The most recent and final stage of that round of upgrade, was the carving of the big ‘Old Man’ tree stump and the addition of BBQ facility in 2014.

The history of that part of the plan or the artist who carved the tree, I do not know, so I cannot speak of it other than to say it really does bring a fullness of time and life and memory to that Old Man as it venerates the totem creatures of the placed those who lived here before the ships arrived. It recalls the creatures and stories of this little patch of ground that is not so far from the main walking track from the summer hunting and fishing grounds of Mosman Park across the spit in the river to  Fremantle and onto the wintering lands of the Bibra Lakes system. That track came up part of Lefroy Road and crossed over and along close by Rennie Crescent there, and then headed off… across this way..  and off over there. Thataway.

Daily, the park is frequented by many, including the resident magpies and galahs happily living in the old and the now grown trees.

The Hilton community has changed a lot over recent years with the addition of so many ‘newcomers’. And many dogs and many more little people – its a baby boom round these parts. All find the park on walks that extend through streets that have great trees planted to support the environs. And its a lovely thing when someone new and still settling in drives by and wants to know, ‘Who planted that tree there?’, ‘How old is it?’, ‘Ohhhh that’s the story of that tree!’. And they all do have a story and the name gets passed along once again. As in old times.

And so it is a good and real thing to sing to the trees and to remember that you are walking on ground that has been loved: to speak to what has been and still is and alive and just as real and living.

The history of the park’s namesake – Mr or Ms Grigg – I don’t know, but I’m sure he or she – a he, I’d guess – was a fine man as he has a Tardis-like, hugely loved patch of ground in his name. Do visit and love it soon.

***Fremantle Shipping News notes that Grigg Park is named after Mr Albert Grigg, an influential member of the Fremantle municipal and town councils in the 1920s. More about him and his family history can be found on the ‘Fremantle Stuff’ website.