The Trees of Fremantle – Booyeembara Park

The Shipping News is pleased to bring you stories about the trees of Fremantle.

‘Boo Park‘, as it is affectionately known to the locals, is located where Montreal and Stevens Streets meet in White Gum Valley, immediately South of the Fremantle Public Golf Course. 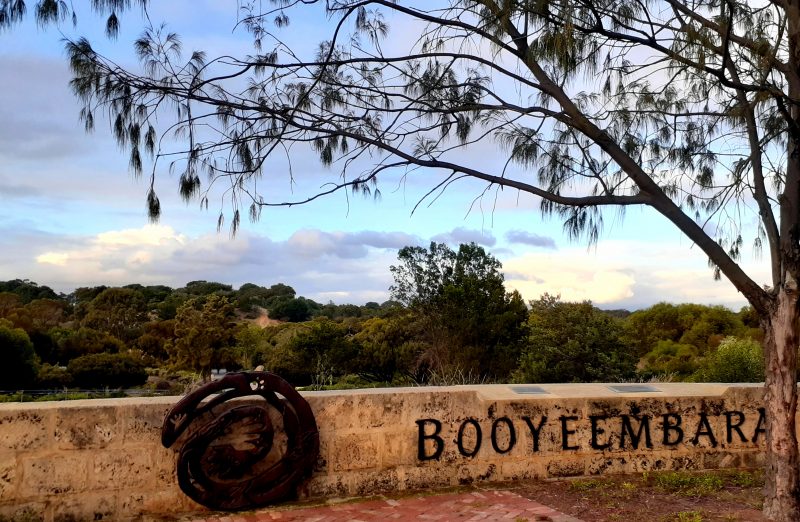 ‘Booyeembara’ is a Noongar word meaning ‘of the limestone hills’.

Before it became Boo Park, back in the 80s, the area was known as Montreal Open Space, a space that the Booyeembara Friends Group have described as being a ‘weedy wasteland’. Before that it was a quarry and a tip. So many limestone areas around Freo seem to have played that role and suffered that fate in the early days of the Colony, and later.

Since 2000, the Boo Park Friends Group have played a major role in transforming the space into a beautiful place to visit year round. 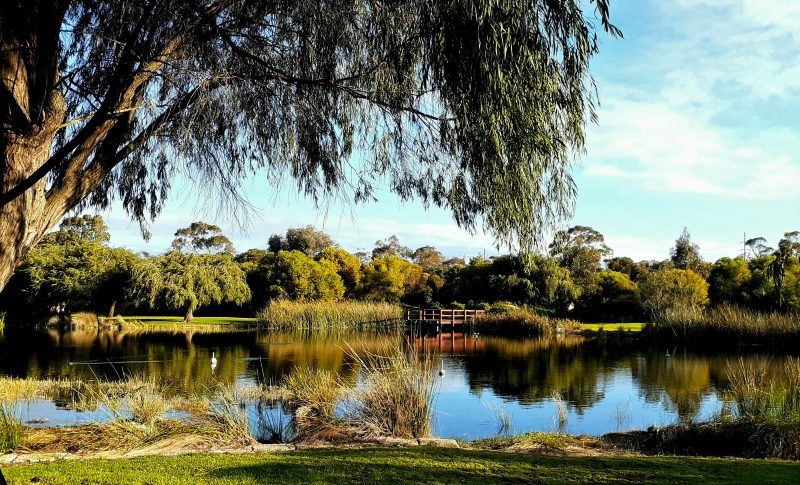 Noongar Elder and Fremantle local Marie Thorne has written of the significance of the Boo Park area to the Traditional Owners in the days before Colonial settlement, in these terms –

Booyeembara was the ancestral name for the hills east of Walyalup (Fremantle), where tribes would come together.  The tribe that lived around Walyalup and Derbal Yerrigan (Swan River) was called the Whadjuck tribe. The area was full of resources and the people hunted and gathered their food.  The vegetation consisted of Balgas (grass trees), quellys (sheoaks) and warnt (tuarts or white gums).  There were bush plants and tucker such as yams, berries, nuts, fruit and fungi.  Poolgarla (banksia) flowers were steeped in water to make liquor on special occasions.  Nyoongars held Manjars (fairs) and Manjarees (feasts), where tribes would travel for miles to be involved in these special events.  They’d come from the North, South and conduct important ceremonies such as initiations, hunting, sporting events and dramatic performances including boomerang and spear throwing, organised fights and weddings.  On these occasions, they would barter for wood, stone, ochre and finished products such as boomerangs, spears and axes. They’d share different foods when it became available and messages would be sent to different tribes to come and enjoy the food.

Today, strolling in from the main entrance to the Park at the south west corner you are greeted on the right by a stand of gorgeous ‘Moort’ trees, Eucalyptus platypus . This is a species of mallee or marlock that is endemic to the southwest of Western Australia. It has smooth bark, broadly elliptical to more or less round adult leaves, flower buds in groups of nine on a broad, flattened peduncle, usually creamy white flowers and conical, down-turned fruit. 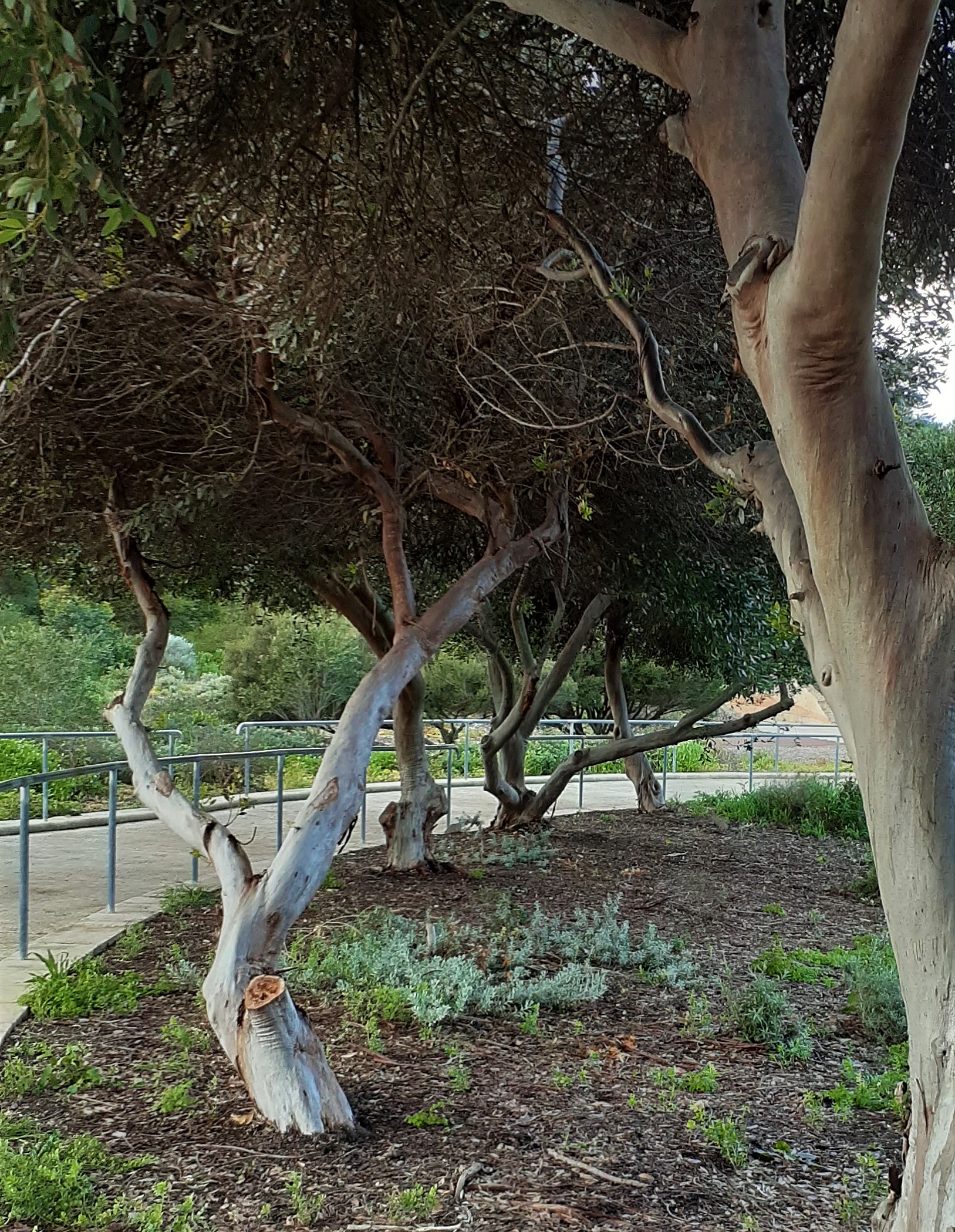 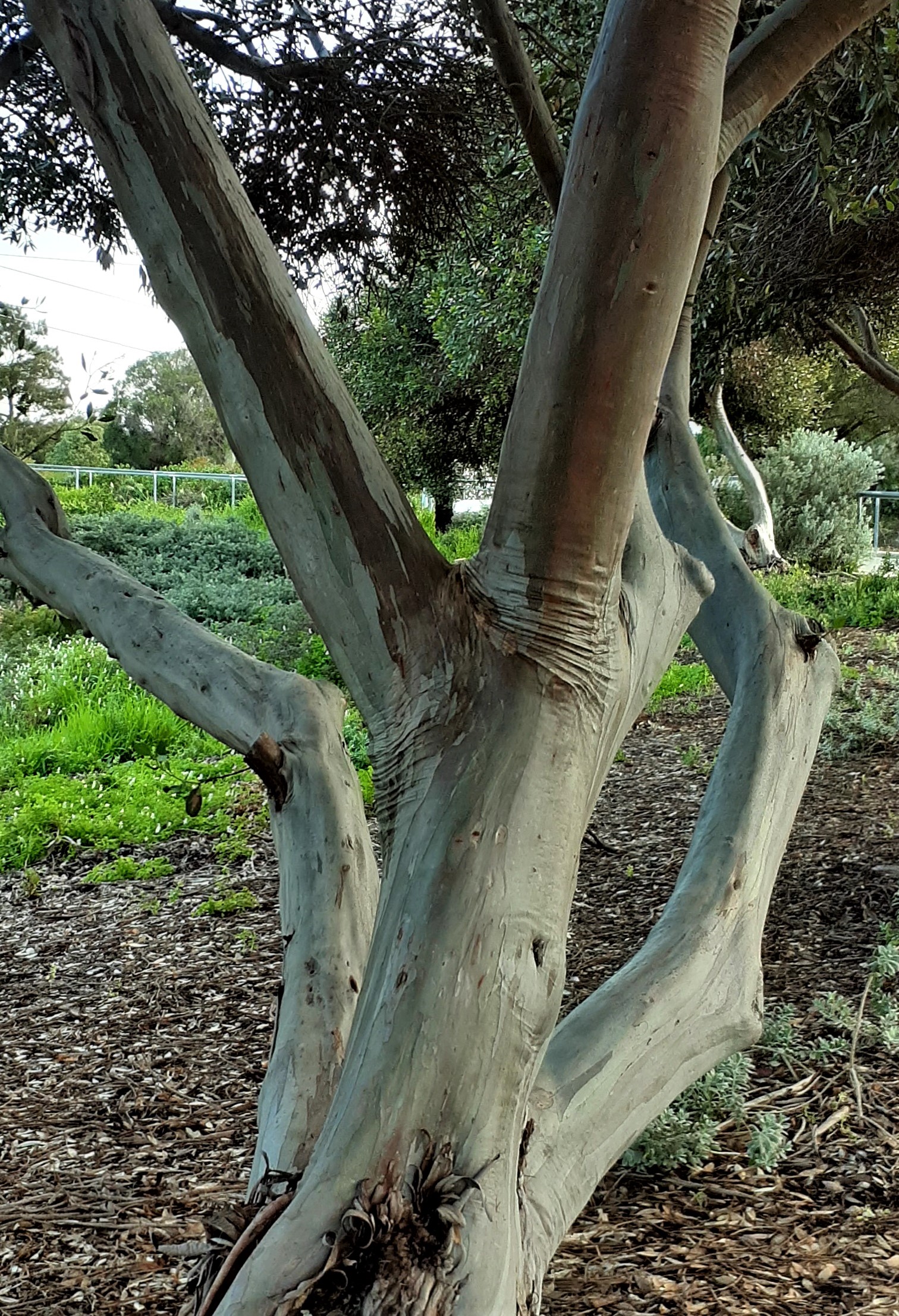 Moving through the park to the east you come across this peaceful wetland surrounded by stunning Swamp Paperbarks Melaleuca rhaphiophylla. My personal favourite place in the park. 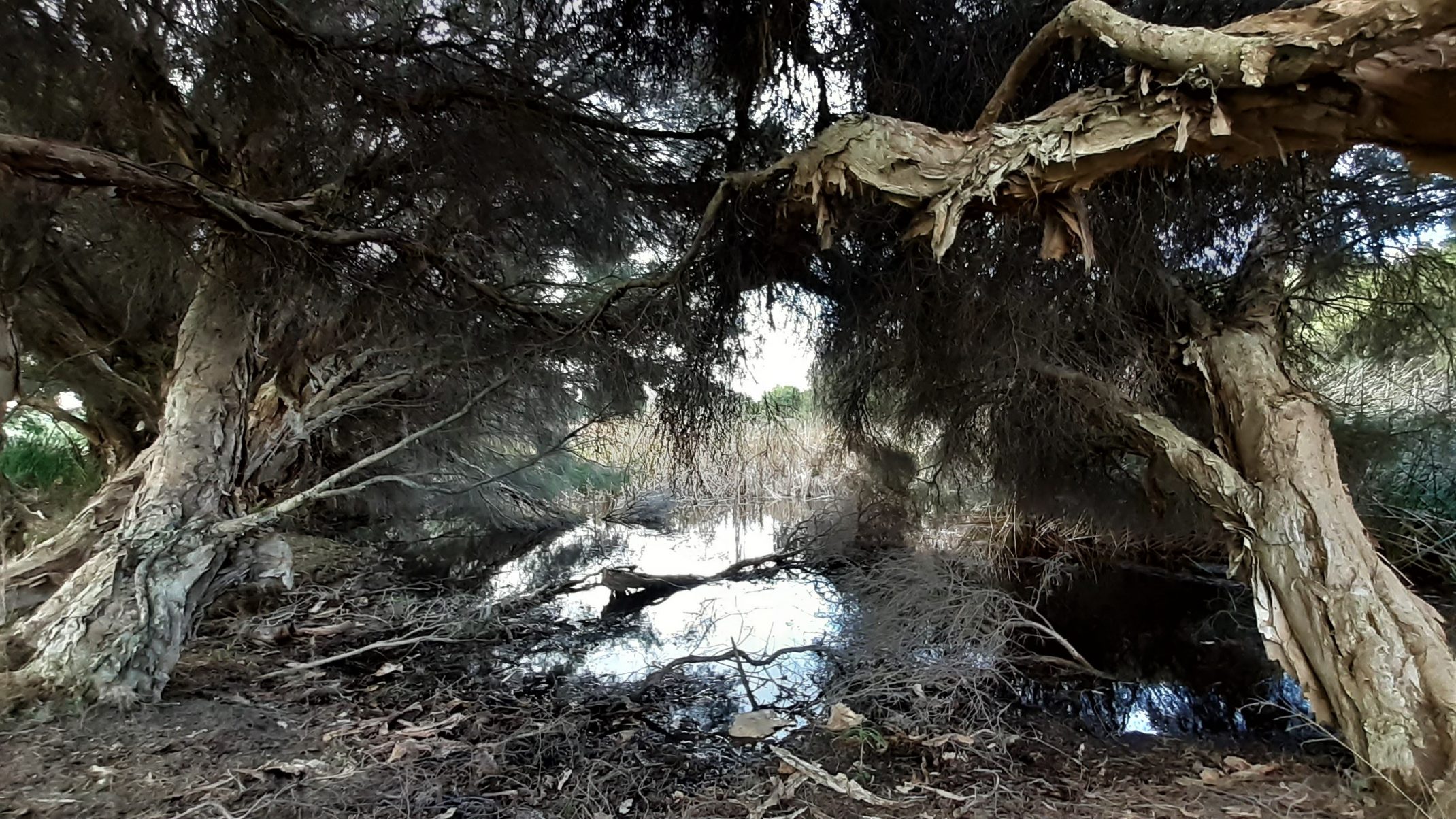 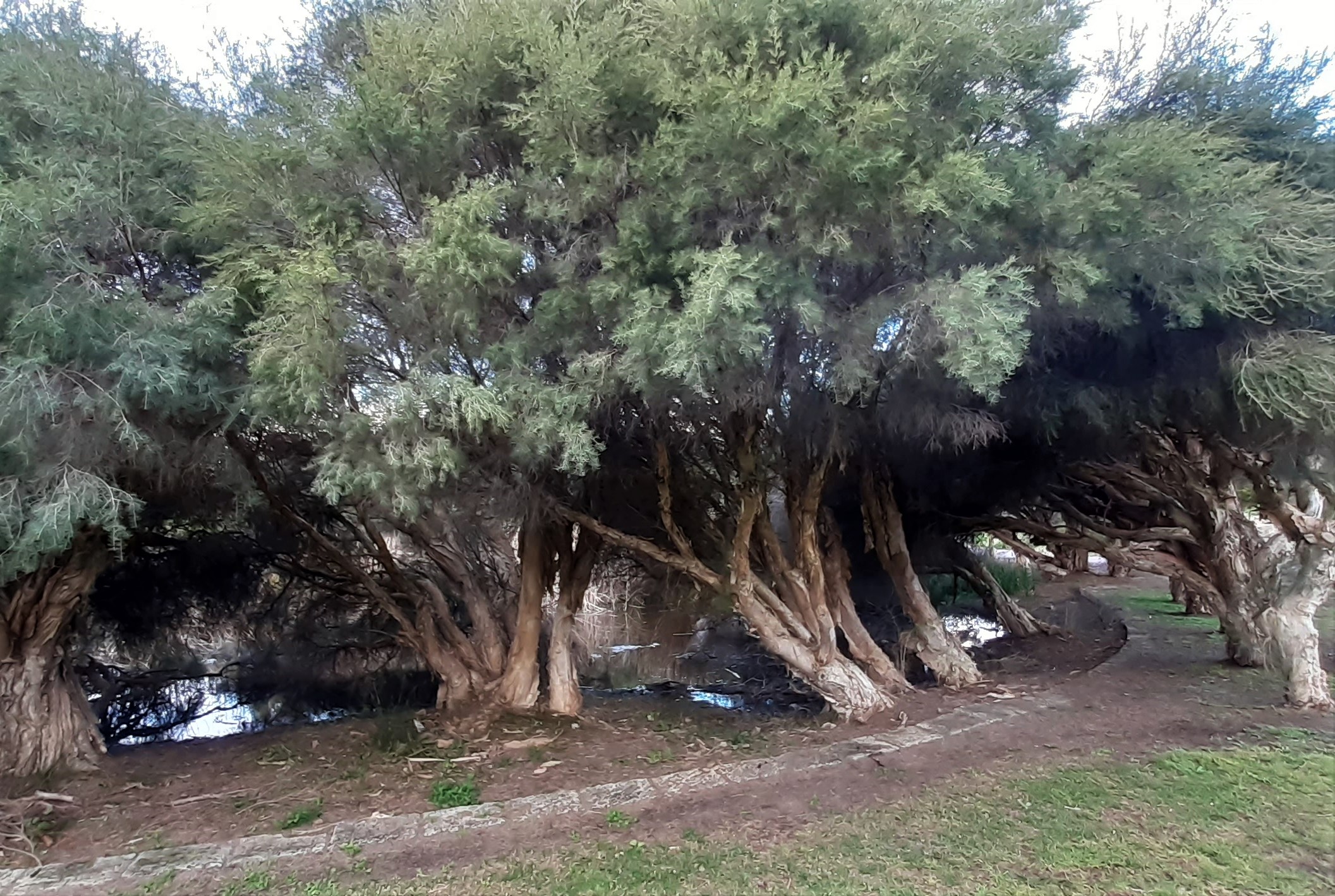 Most Perth folks would be used to seeing this local species on verges and in parks – it’s the WA Peppermint, Agonis flexuosa. Crush one of the leaves and inhale the scent and there is no doubt you are looking at a WA ‘Peppy‘.

The genus name Agonis comes from the Greek agon, ‘a cluster’, referring to the arrangement of the fruits. The species name flexuosa is Latin for ‘full of bends’, referring to the zig-zag course of the stem, which changes direction at each leaf node. It was originally placed in the genus Leptospermum by Sprengel in 1819, but Schauer placed it in Agonis in 1844.

Noongar peoples used the plant leaves as an antiseptic. Sapling trunks were used as spear shafts and digging sticks. 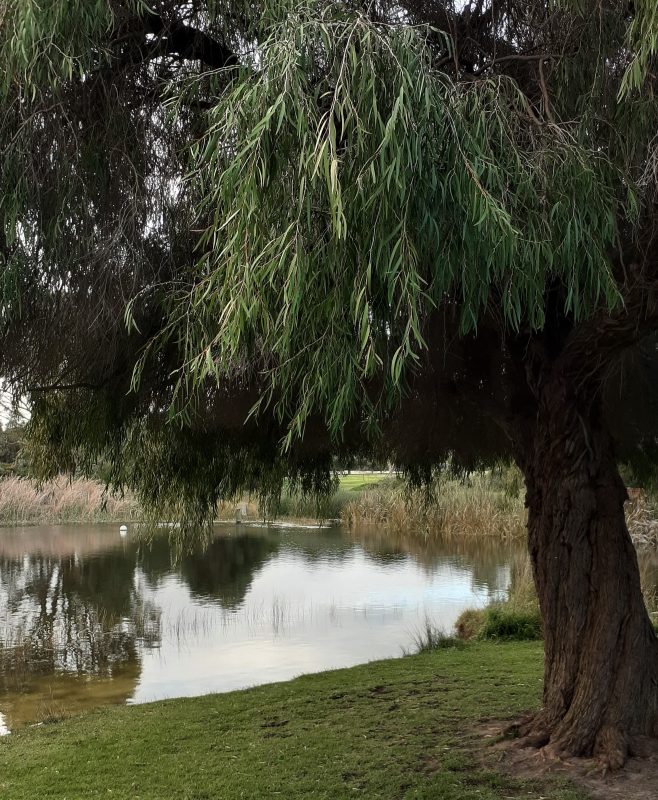 Strolling further north east into Boo Park on an August day I came across these beautiful Wattles, Acacia cyclops in flower, with their stunning yellow flowers scattered along the path below creating a serene atmosphere. 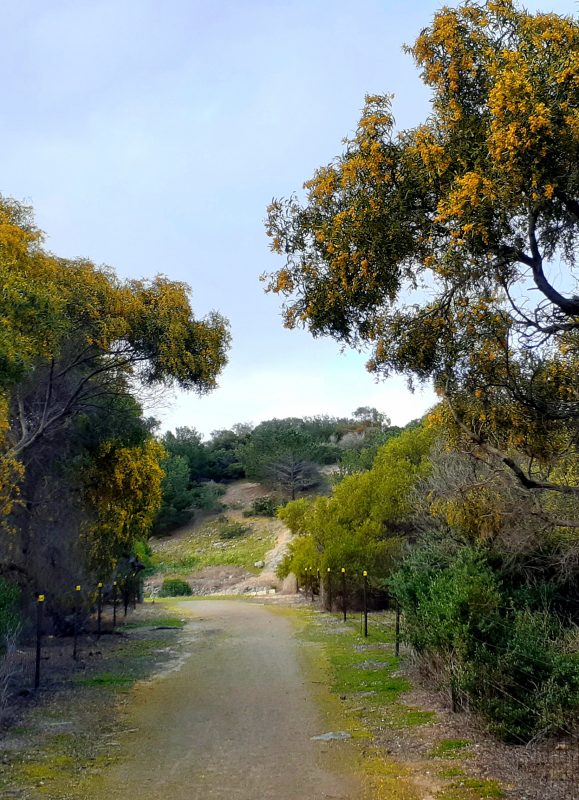 Up in the north of Boo Park, there is a lovely stand of Olives. I wonder whether anyone looking for fallen olives suddenly discovered a mysterious ‘White Olive’? 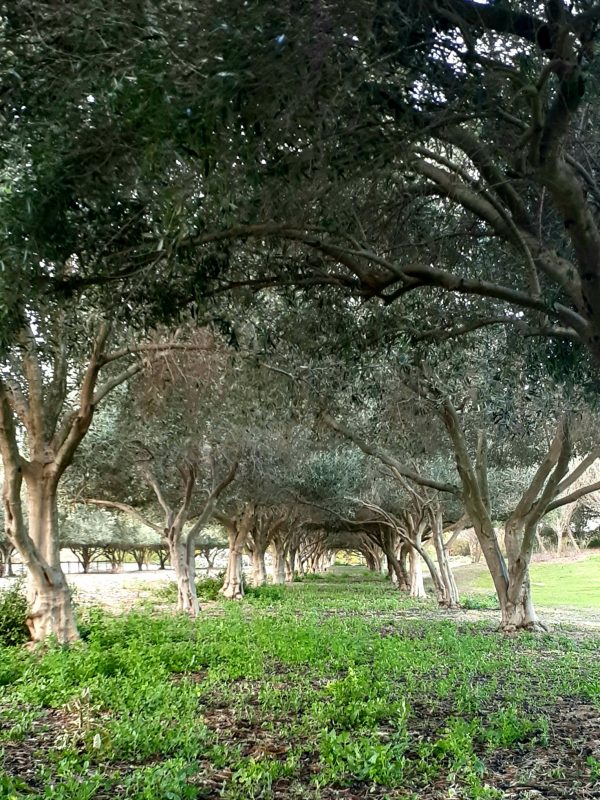 You see, the olive grove is immediately adjacent to the Public Golf Course’s driving (practice) range. I know with my limited golf skills I have had a few balls go astray!

Many a picnic, celebration or family/community event has been had in the shade of these gorgeous Moreton Bay Figs Ficus macrophylla. 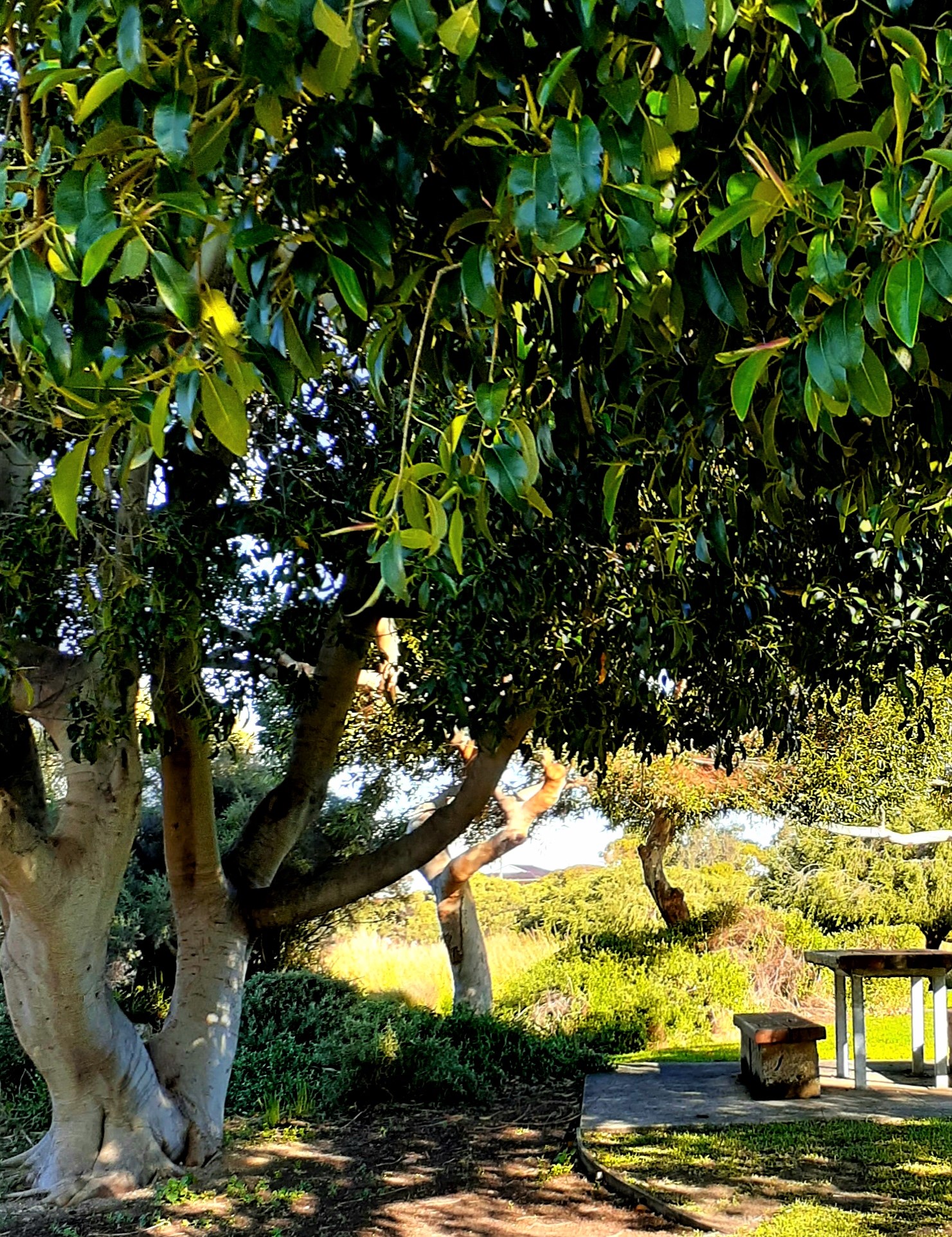 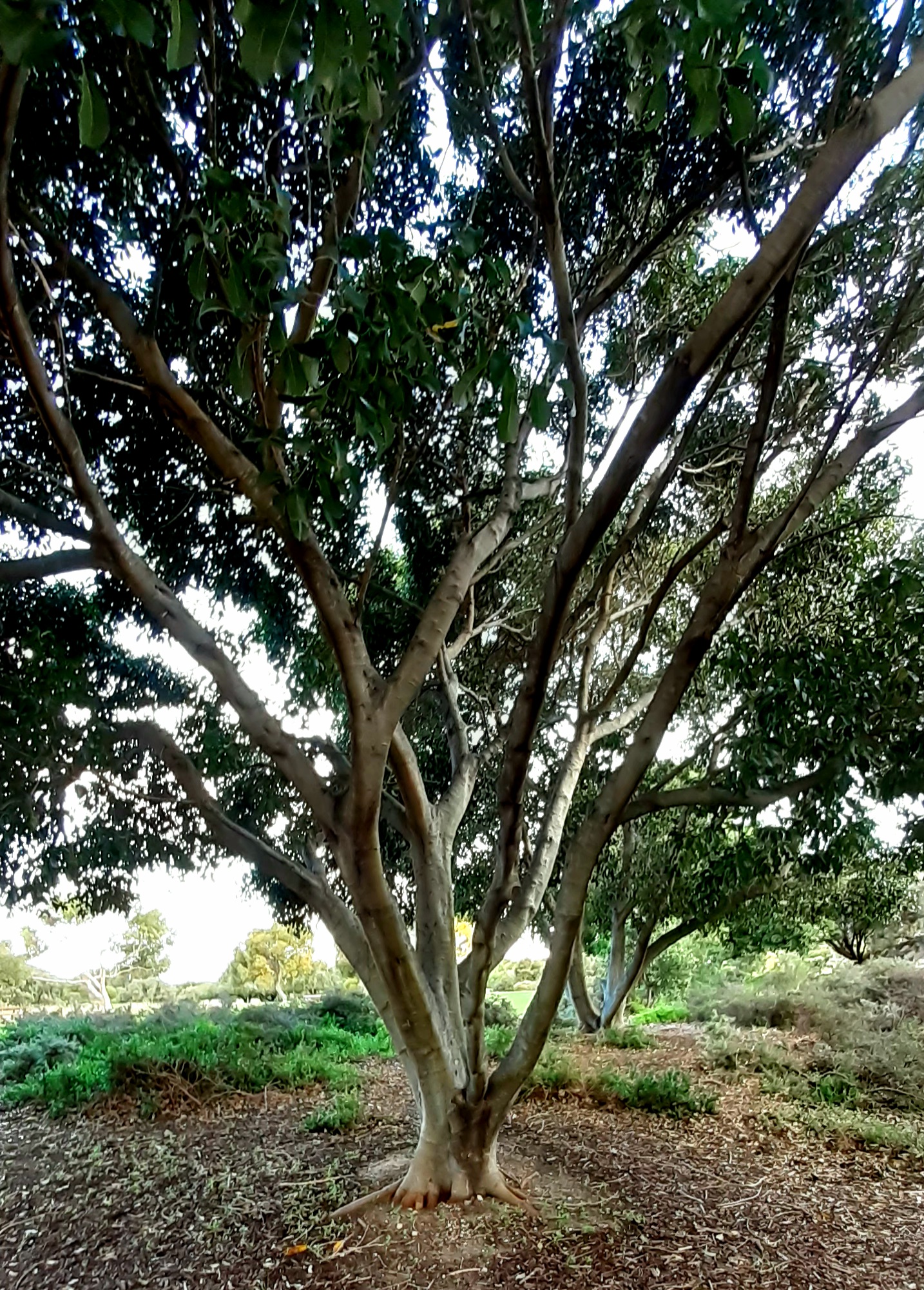 If you have not explored beautiful Boo Park yet, I highly recommend it – or maybe it’s time to rediscover Boo. There is so much more to enjoy! 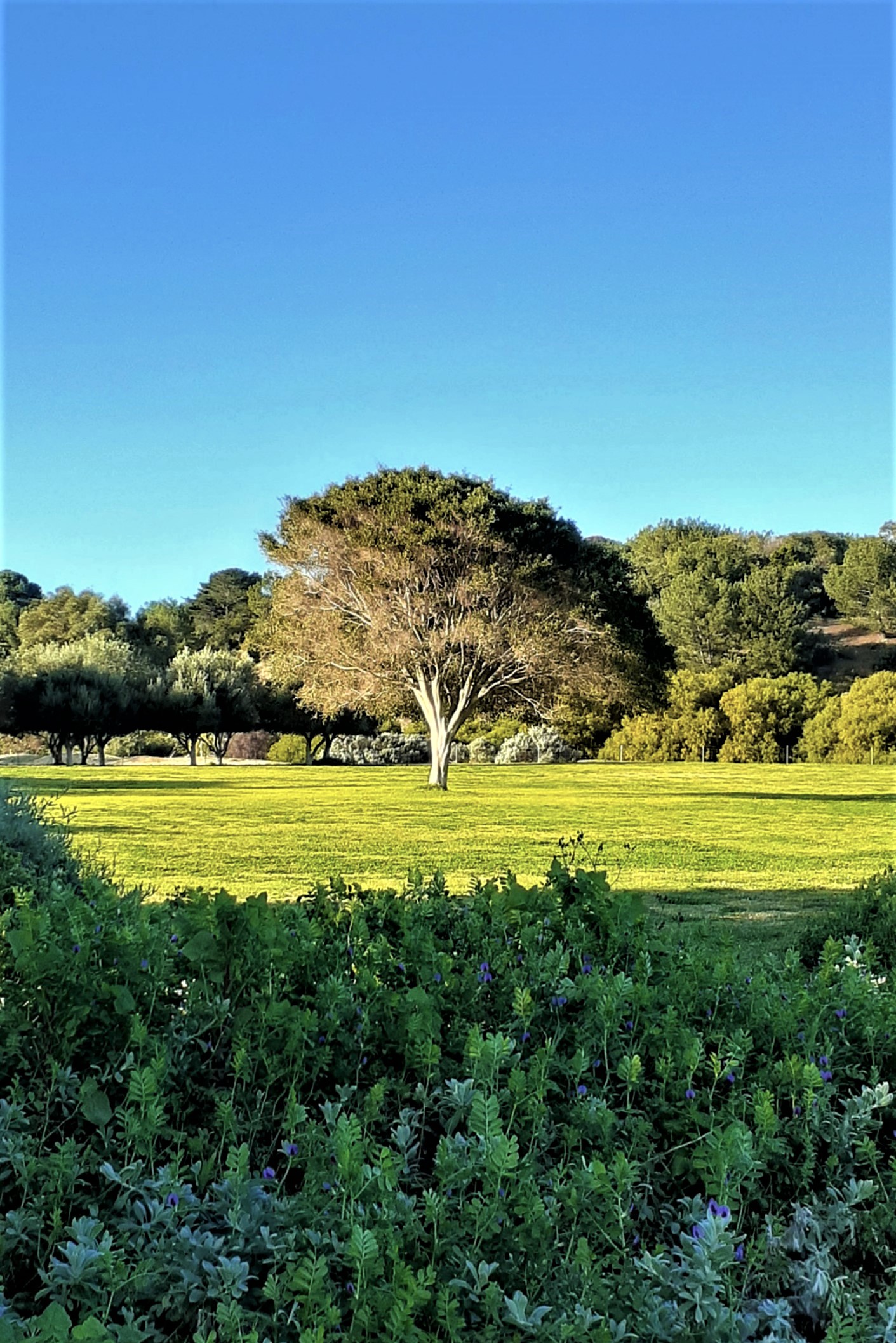 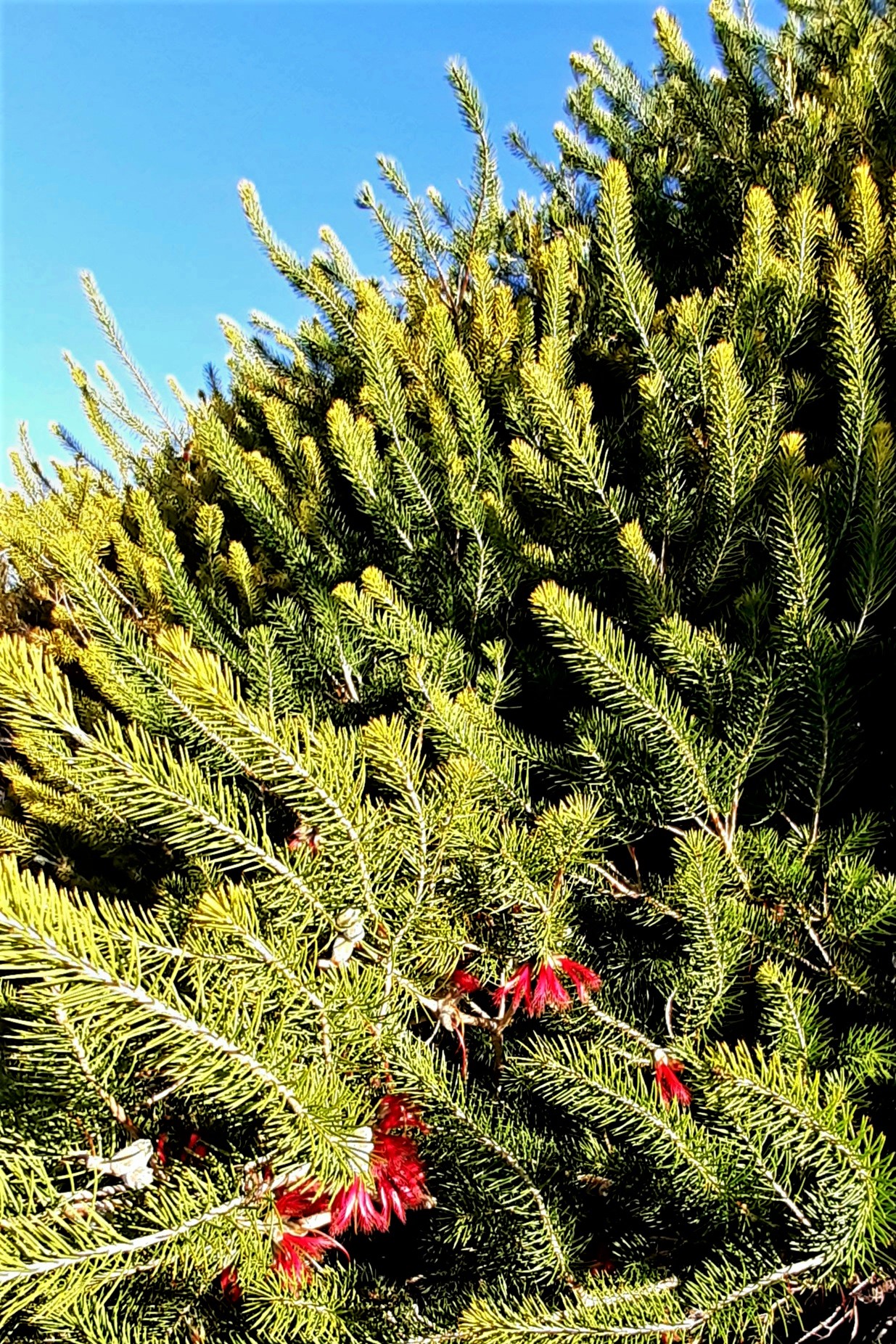 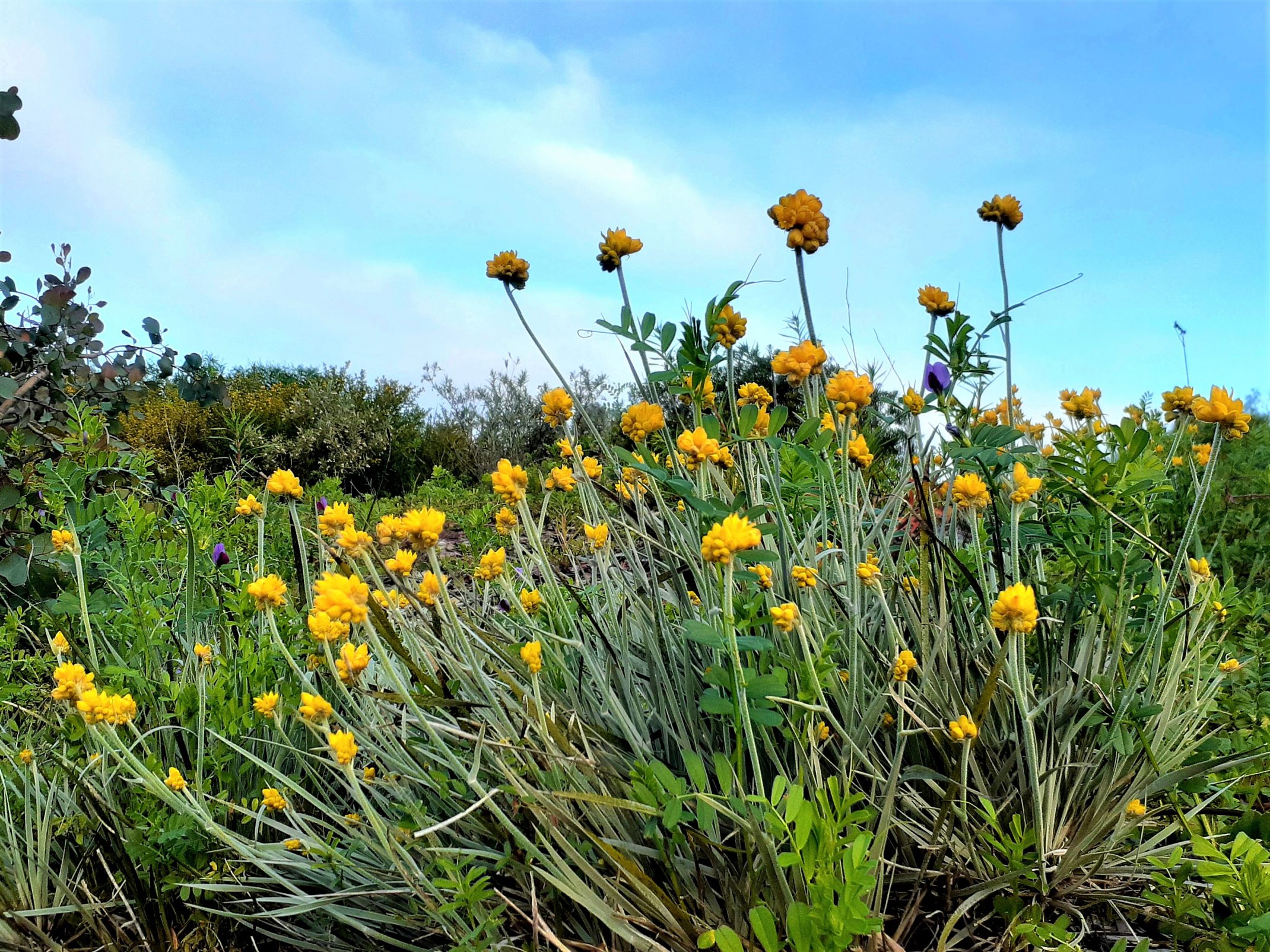 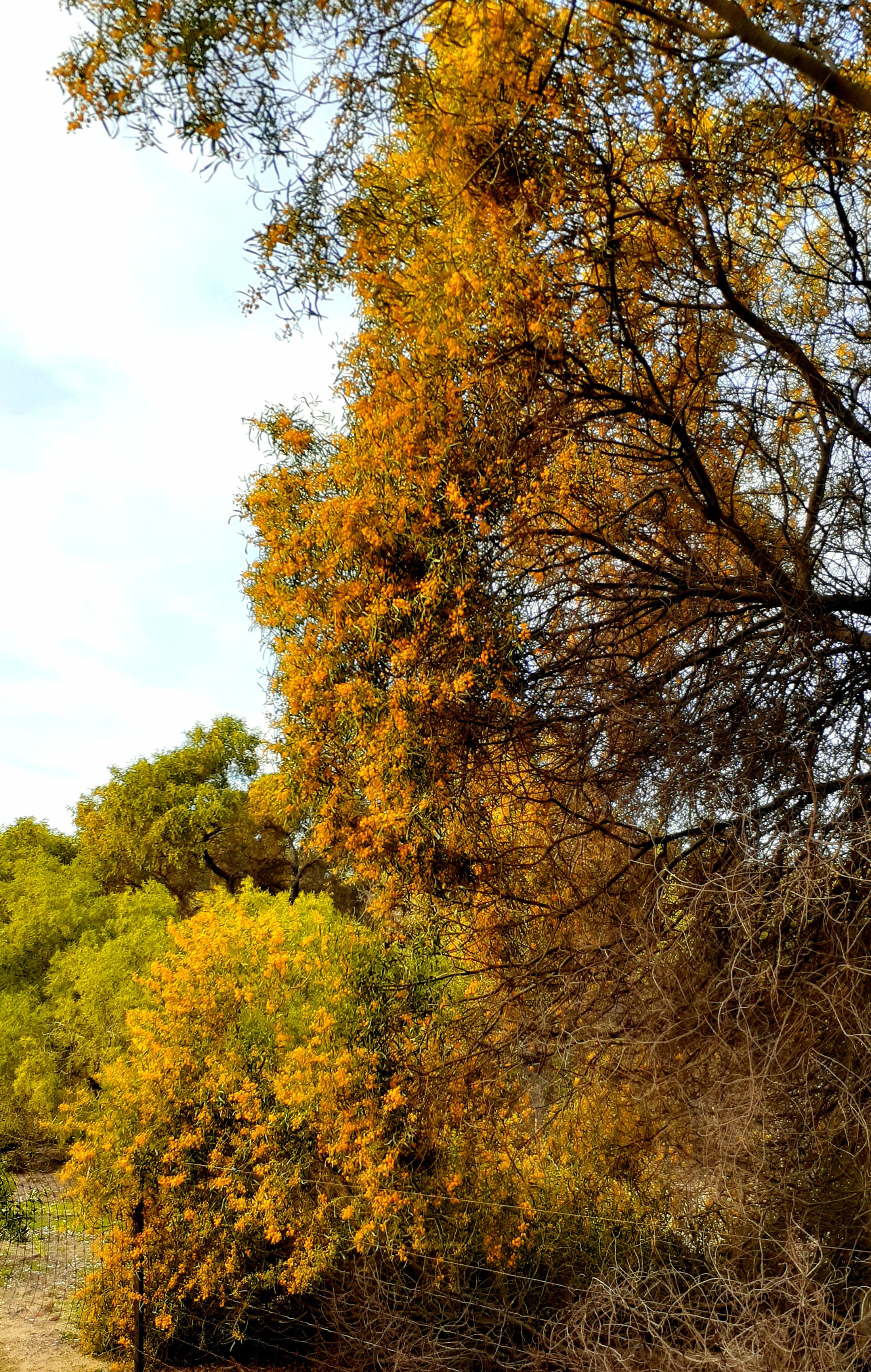 * If you’d like to tell us about your favourite Freo trees, contact us here. We’d love to hear from you.