The Royal George Gets Approval With Conditions & 18 Month Start Time

Reactions to the decision of the WA Planning Commission on 4 November 2021, to grant conditional approval to the redevelopment of the Royal George Hotel and the construction of an adjacent nine storey apartment tower with 23 apartments will elicit a range of responses, to be sure. 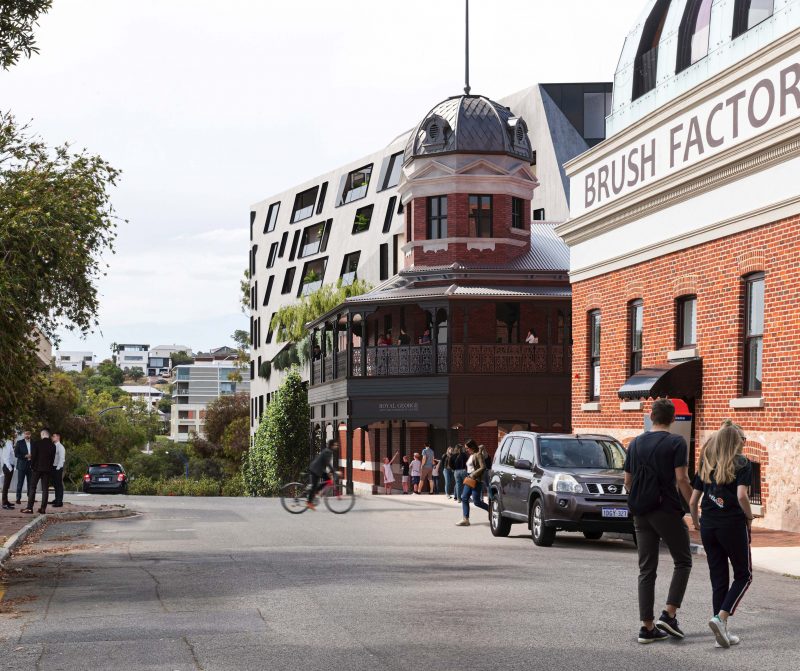 The $24million development incorporates the restoration and adaptive re-use of the hotel with a craft food and beverage production area, cellar door sales, a small bar, restaurant and 10 restored hotel rooms.

The new apartment building on the northern side of the hotel will house 23 apartments and 52 cars parking bays, including 44 residential bays and eight commercial bays for hotel staff.

The development application was the 15th to be approved by the Western Australian Planning Commission under the temporary Part 17 significant development pathway, designed to support the State’s economic recovery.

A total of 238 public submissions were received on the proposal: 20 per cent in favour of the development, 41 per cent supportive subject to changes being made and 39 per cent were against the development. The key issues were a lack of parking for the hotel and the height of the apartment building, which is about 3m higher than permitted under the Local Planning Scheme.

The Mayor of East Fremantle, Jim O’Neill, has already explained how the Town fought the good fight but lost. Many are likely to accept the decision with resignation.  Others may want to vent their spleens and wonder where to from here?

While reactions, both considered and emotional, begin to percolate through, 2 things immediately stand out about the decision  –

1  The approval is conditional and some community concerns may be ameliorated through the implementation of the conditions.

2 The development must be substantially commenced within 18 months of the approval or it lapses, as does the 2020 Covid planning rules under which the development in this form has been approved.

While the minutes of the WAPC meeting approving the development won’t be available for a little while, we expect the gist of the reasoning of the WAPC will reflect the WAPC officers’ report that finished up recommending conditional approval – although, interestingly, with a 12 month substantial commencement requirement, not the 18 months that the WAPC finally allowed.

Here’s the conclusion to the officers report  –

The Royal George Hotel is a significant State Heritage place and a highly valued land mark and focal point for the local community. There have been many differing views expressed through the consultation process on how the Hotel should be redeveloped, particularly in relation to the height of any new development, the quality of the design and how it would address long standing parking issues in the area. While any redevelopment of the site needs to protect and conserve the important heritage elements of the Hotel building, delivering new apartments on the site while creating new opportunities for the public enjoyment of the Hotel are considered integral to the overall success of the project.

In this case the proposal involves the restoration of the Hotel and redevelops what has been a vacant and neglected site for approximately 30 years. It will provide modern accommodation, food and beverage offerings to the community, once again offering public access and enjoyment of an historic building. While it is acknowledged that the strong design language has polarised views, both the SDRP [State Design Review Panel] and the Heritage Council were supportive of the proposed design and its response to the local context. Main Roads WA and the Department of Department of Local Government, Sport and Cultural Industries have also raised no objections in relation to the proposed development.

The issues that have been raised by the Town relate primarily to the impact of the proposed development on public parking in the area, building height, waste management and the provision of public art. In weighing up the proposed parking arrangements, it is important to give consideration to the history of the Hotel and the constrained natured of the site. The realignment of Stirling Highway in the 1980’s has modified the property boundaries to the extent that it is no longer possible to provide a functional public parking area within the site. However, it is acknowledged that the proposed adaptive reuse of the Hotel will inevitably place additional parking pressure on the area that is not sufficiently catered for the provision of eight (8) commercial parking bays that will be allocated to Hotel Staff. As the provisions of LPS3 which allows commercial parking for the Hotel to be reduced to nil have now been superseded by the Deemed Provisions, a condition has been recommended requiring a cash-in-lieu payment of $261,000 to the Town for the estimated shortfall of 29 parking bays.

The Town and the local community have a reasonable expectation that any development should be designed within the recently amended development standards of LPS3 that were adopted in early 2020. In this instance, the parapet wall height is approximately 300mm above the maximum building height of 43m AHD permitted by LPS3. The rooftop plant also includes habitable floor space and exceeds the maximum height of 1.5m prescribed by LPP3.1.6 by approximately 1.5m. While this has resulted in an overall building height variation of approximately 1.6m under LPS3 and some additional building volume within the roof space, line of sight diagrams that have been provided demonstrate that the rooftop plant amenities will not be clearly visible above the height of the parapet from two vantage points on Duke Street.

The proposed development is anticipated to generate approximately 72 full time equivalent construction job years over the development timeframe and 41 ongoing jobs both directly and indirectly from the operation of the Hotel. With restoration works currently underway and a scheduled commencement date of Q4 in 2021 a substantial commencement time frame of 12 months has been recommended which will support the State’s economic recovery from the COVID-19 pandemic. This also aligns with the Heritage Agreement relating to the land sale. The proposed development will also be benchmarked to a 5-star Green Star certification and the residential component maintain an ongoing Carbon Neutral (Climate Active) certification.

Overall, the proposed development has been assessed in the context of Part 17 of the Planning and Development Act 2005 and it can be considered that the proposed mixed-use development satisfies the intent of the planning framework for the reasons outlined in this report. The proposed development presents a high- quality design that will positively contribute towards and enhance the amenity of the locality, on what is a highly constrained site with two vastly different street interfaces. Full consideration has been given to the objections raised and the comments received, and it is considered that the final plans and additional information submitted by the applicant has adequately addressed these matters or, where appropriate, can be adequately resolved through recommended conditions. The proposal is considered to be consistent with orderly and proper planning and will make a positive contribution to the State’s COVID recovery. On this basis the application can be supported and is recommended for conditional approval.

We await the next steps.