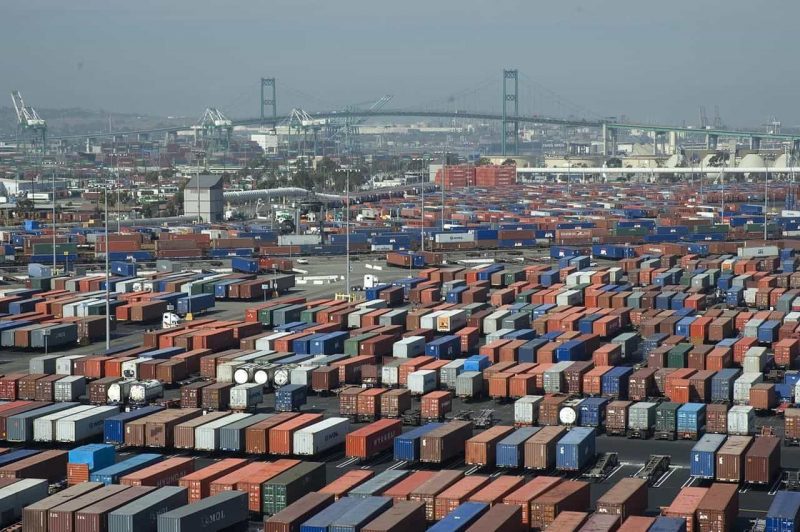 Plainly the issue is not going away. Today, the ACCC – the Australian Competition and Consumer Commission – has issued a report focussing on the problem. Here is what they have had to say.

The ACCC’s Container Stevedoring Monitoring Report 2020-21, released today, looks at the impact of the current global logistics crisis on Australia’s container trade, as well as the prices, costs, and profits of stevedores at Australia’s international container ports.

It finds that a surge in demand for containerised cargo and extreme congestion across the global supply chain have caused major disruptions and delays.

A number of Australian exporters are struggling to meet their contractual obligations, and some large retailers are so concerned that their cargo will not arrive before Christmas that they are buying their own shipping containers and chartering their own vessels.

“International shipping line movements normally run lean and just-in-time, but a surge in demand and COVID-19 outbreaks that have forced numerous port operations to temporarily shut down have caused congestion and delays with a cascading effect across the globe,” ACCC Chair Rod Sims said.

A stevedore told the ACCC that only 10 per cent of vessels arrived in their designated berth windows in 2020-21, which is their lowest rate on record.

“Pre-pandemic, the sector would have likely been able to manage such a surge in containerised demand, but the simultaneous destabilisation of almost every part of the supply chain has left them without any spare capacity and struggling to cope,” Mr Sims said.

The report shows that freight rates on key global trade routes are currently about seven times higher than they were just over a year ago. However, even at these rates, shipping lines cannot guarantee on-time delivery.

“The margins of Australian importers and exporters are being squeezed, as they are all around the world, and the current situation is very challenging for businesses that rely on container freight,” Mr Sims said.

The ACCC considers that the operation of the global supply chain will be restored, and freight rates will fall once the shocks caused by the pandemic stop. However, Australia risks becoming a less attractive destination for shipping lines unless productivity, workplace relations, and supply chain inefficiencies are addressed.

A recent study by the World Bank and IHS Markit showed that even before the pandemic disruption, Australian container ports were relatively inefficient and well below international best practice. The study ranked Australia’s largest container ports, Melbourne and Sydney, in the bottom 15 per cent and 10 per cent respectively, of the 351 global ports in the study.

Data published by the United Nations Conference on Trade and Development also shows that in 2019, the median in-port time for container ships visiting Australia was three times longer than Japan, twice as long as China, and 50 per cent longer than Singapore or New Zealand.

“We were told that some shipping lines were already withdrawing services from Australia before COVID hit. Australia needs to take decisive action to remain an attractive destination for global shipping lines,” Mr Sims said.

This leads the ACCC to further comment on workplace relations and practices.

The report looks at how systemic industrial relations issues and restrictive work practices have further disrupted the supply chain and exacerbated congestion and delays.

The ACCC refers to data it says show average idle hours, which is the length of time a ship spends in berth, at Port Botany increased from 11.9 hours pre-pandemic to 21.2 hours in 2020-21. Congestion at Port Botany has become so bad that some shipping lines are skipping the port entirely.

“Industrial action on top of pre-existing congestion has unfortunately put enormous strain on our international container ports at a time when they can least cope with it, and in the case of Port Botany, some shipping lines have decided the delays make using the port commercially unviable,” Mr Sims said.

The ACCC says the Maritime Union of Australia (MUA) has recently used industrial action to push for restrictive work practices, including enterprise agreements that limit the ability of stevedores to automate and make recruitment decisions. For example, Hutchison Ports Australia’s enterprise agreement requires 70 per cent of new recruitments to be ‘family and friends’ of existing employees, or people chosen by the MUA.

It says the union wants a similar provision in Patrick Terminals’ agreement, but last week Patrick applied to terminate the agreement on the grounds that it restricts it from being able to meet its customers’ requirements.

Changes in the container freight supply chain are also the subject of ACCC comment.

The report identifies a number of other longer-term trends that have transformed Australia’s container industry over the past decade. For example, the entry of Hutchison and VICT has changed competitive dynamics between stevedores and, as a result, stevedores are now earning less and investing more. They have also had to rely more on revenue from charges levied on landside transport operators than they have in the past.

”At the current level of landside charges, stevedores do not appear to be earning excessive returns, but we will continue to keep a close eye on these charges,” Mr Sims said.

The report says that the privatisation of four major container ports in Australia (Port Adelaide in 2001, Port of Brisbane in 2011, Port Botany in 2013, Port of Melbourne in 2016) has brought some benefits to the container industry through more dynamic port operations. However, it has also led to higher prices, at least at some ports.

“In 2020, the Essential Services Commission of Victoria found that the Port of Melbourne exercised its market power in charging land rents to port operators,” Mr Sims said.

“The ACCC has been saying for some time that the current little or no regulation of container ports in Australia is not fit for purpose. Regulation needs to compensate for a lack of competitive pressure on the ports.”

The report also recommends that public and private infrastructure investments are made to fix inefficiencies in the supply chain caused by larger ships, lack of rail access to Australian container ports and shortage of space in empty container parks.

We should note that the ACCC report relies on the following information.

* S&P Global Platts container index (US$/FEU): August 2017 to September 2021
In September 2021 freight rates for container transport were about seven times higher than they were one year ago.
Source: S&P Global Platts
Note: The Platts Container Index is a weighted average of Platts’ key container assessments including North Asia-to-North America and North Asia-to-North Continent routes. FEU (forty-foot equivalent unit) is a measure of volume in units of 40-foot long containers.

* The ACCC has monitored the container stevedoring industry since 1998-99, under a direction from the Australian Government.