Land Patrol – If it could go wrong …

Bernie spent many years as a Customs Officer patrolling the WA coast, but occasionally he got to see land, as in this story.

Between 1976 and 1979 I was stationed in Broome as one of the 6x crew members on Customs’ ACV Jacana.

As well as our Marine tasks we were also required to assist the rest of the staff with other duties. One of these, and definitely my favourite, was – Land Patrols.

Land Patrols were completed in one of Broome Customs two Land Rovers (one for the Office and one for the Marine Unit). The purpose of these patrols was to liaise with the various cattle stations in the Kimberly on an irregular basis to check for such things as: unusual sightings of aircraft; 4W Drives; people; and anything else considered suspicious.

Accompanying me on this particular patrol was another crew member whose nickname was ‘Speed’.

Our first or second overnight camp was at the camping ground at Winjana Gorge, I suspect a completely different arrangement to what it is now. 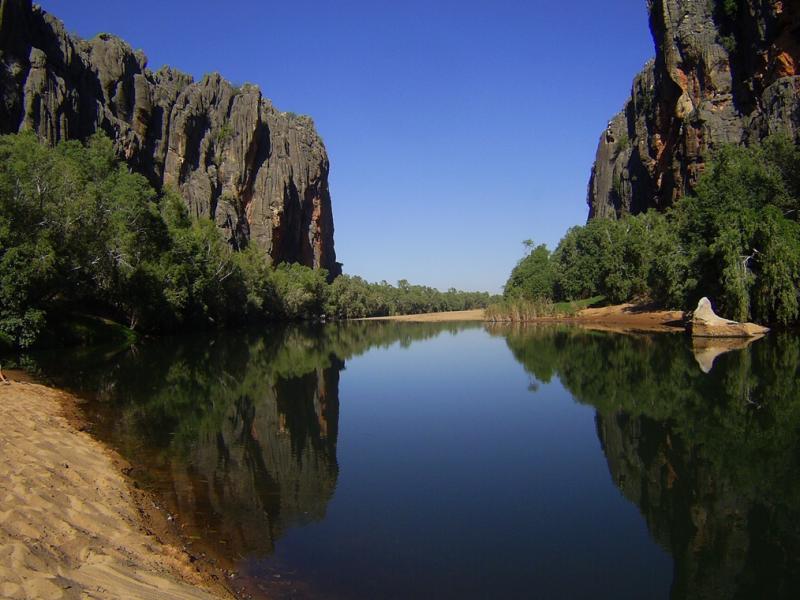 As we arrived the sun was setting and the twilight very short lived due to the proximity of the Tropics to the Equator.  We quickly began to set up camp while there was some light left to see what we were doing.  After most things were organised, I needed to go for a pee.

It was now nearly completely dark, just a distant glow of the last receding rays of the sun lighting up some clouds. On arrival, I had noticed what I thought was a relatively shallow dry creek bed running alongside the campground about 20m from where we had camped.  Deciding this would be a good place to go, I wandered over and jumped down …

First mishap: The ‘shallow’ creek bed was more like 1m to 1.5m deep. I came to lying on the bottom of the creek bed ‘seeing stars’ a few seconds later.  Luckily no serious damage but it was a bit of a shock to the system!  I hastily peed and scrambled back up to the top, covered in a bit more Kimberly pindan dust than I had been, sporting some new scratches and feeling slightly sore and uncomfortable.  I strolled back to camp as innocently as I could.

The next day, as we were only half an hour or so from Dimalurra/Tunnel Creek and being on our way to our next station, we decided to have a look.  Tunnel Creek is a natural cave formed over millions of years by fast flowing wet-season water cutting through from one side of Napier Range to the other.  It is about 1km long (2km return trip), around 12m wide and with varying amounts of water in many pools. On occasion it is known to be inhabited by freshwater crocodiles. While relatively safe and harmless, all bets are off if you step on one! Depending on time of year, wading through water is required in some parts of the tunnel.  A good quality torch with fresh batteries is essential (this was long before headlamps were a thing!).

Second mishap: No, neither of us stepped on a crocodile, but Speed came very close to doing so whilst looking up at some bats on the roof near to the far end of the cave.  The close encounter scared the ‘shit’ out of both of us. Speed quickly (very unusual for him) recovered and took refuge on a higher part of the tunnel floor to where I had already leapt.  After regaining our composure, we were soon at the end of the tunnel, only problem was, we had to go back the same way or climb over the top.  Speed decided he wasn’t built for climbing across the top, so we had to go back the same way.  Reluctantly we retraced our steps back through the tunnel, but it took us nearly twice as long as the inward trip as we kept seeing or thought we were seeing pairs of ‘red eyes’ in the torchlights. 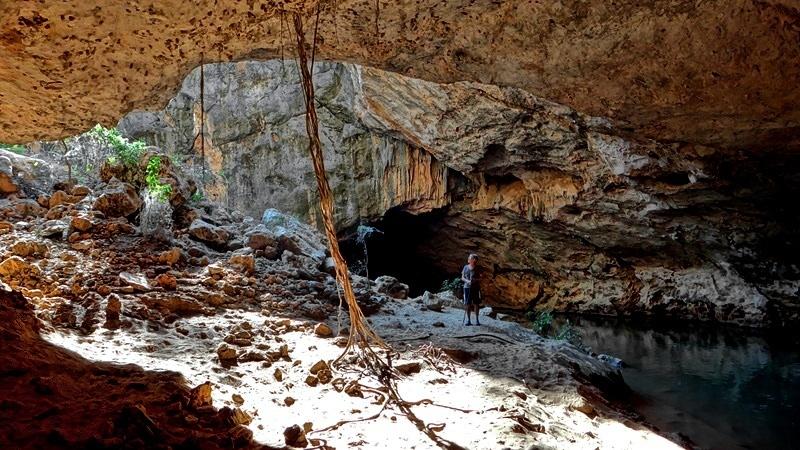 (Many decades later when visiting Tunnel Creek again, on one of our 4×4 trips, we did successfully climb over the top but were nearly thwarted, right at the last part, by a severe climb/scramble back down to normal ground level. Just as well Speed didn’t attempt it all those years before!)

So, onward to the next Station.  Here we made contact with the Station Manager recording anything of possible interest.  After downing a nice cup of tea and some freshly baked scones he asked where we were heading next, and we said ??? station (can’t remember the names after 40 odd years later).  He then hastily scribbled a mud map and verbally described a ‘short cut’ between his station and the adjoining one, which was our next destination.

Excellent we thought, arrive at the next station earlier than expected, with more time to enjoy a beer.  So, off we went armed with this new information, out into the unforgiving Kimberly bush and along a far from well used station track.

Progress slowed to a crawl while we negotiated one obstacle after another.  As the track was quite rough, it was also very noisy in the Land Rover. After what seemed hours, the track slowly started to improve, and we figured we must be on the next station and closing in on the Homestead (not that we had any idea where we actually were – this was long before any form of satellite navigation in vehicles).  The track continued to improve to the point where it was quite smooth again.  Only problem was the noise in the vehicle had stayed the same and the back end was jumping around for no particular reason. We were just starting to wonder what was going on when it happened …

Third mishap:  The left rear wheel went hurtling past us and disappeared into the bush to the left of the track ahead of us, as the vehicle lurched violently to the left and dropped down in the rear.  Quickly stopping, with the rear leaning badly over to the left, we got out to survey the scene. “Oh shit”, we both mumbled at the same time. “That’s going to be a problem,” said Speed.  We were looking at where the left wheel should have been but, instead, we were looking at a badly gouged wheel hub with no less than five of the five wheel studs broken off.

Slowly regaining our composure, we headed off looking for the missing wheel (well, the vehicle wasn’t going anywhere in a hurry!). This took much longer than we had anticipated, because neither of us had really noticed where the wheel had entered the bush and we weren’t prepared for how far it had travelled.  So, 5 or 10 minutes later, we finally returned to the stricken ‘Rover’ with the missing wheel.  “Now what?” said I. “Time for a cuppa.” said Speed. A good idea, so we gathered up some dry twigs and commenced to boil the billy.  A few minutes later, with fresh cups of tea in hand we had a closer look at our new problem.

All five holes for the wheel studs in the retrieved wheel were completely flogged out making that wheel totally unusable.  Closer inspection of the left rear wheel hub showed 4x wheel studs had sheared off completely, leaving only one with a mangled thread and no wheel nuts to be seen anywhere.  What the hell were we going to do?

Eventually we decided the only option we had was to jack up the other three wheels in turn and remove a wheel stud and wheel nut from each wheel hub.  This we accomplished reasonably easily, well, certainly compared to jacking up the lefthand rear of the vehicle.  ‘All’ that remained was to knock out 3x of the sheared off wheel studs in the damaged hub and install the ‘borrowed’ wheel studs. The end result, three wheels with only 4x studs instead of 5x and the damaged lefthand rear, with only 3x studs and nuts and part of a stud sticking through one of the holes in the rim.

So, we should be good to go. We picked up and stowed all the tools etc and finally got going, now considerably later than we should have been. Speed started the engine, put it into gear and very gingerly accelerated and all seemed OK. We decided to keep the speed down to 50kph absolute max and down to only 30kph or less on any rough surfaces.  We stopped and got out a couple of times to visually inspect each wheel to see if was behaving, luckily, they all were.

All went well and we finally made it into the Station where we were staying that night (in the shearing quarters). We were a few hours later than we should have been, and it was now dark.  Although the station family were concerned for our whereabouts, they had decided to think positively and had made us dinner as were staying overnight. It was an excellent roast followed down with a couple of cold beers, very hospitable people.  After relaying our eventful story to them, they explained that nobody had actually driven the ‘short cut’ for a number of years; now they tell us! 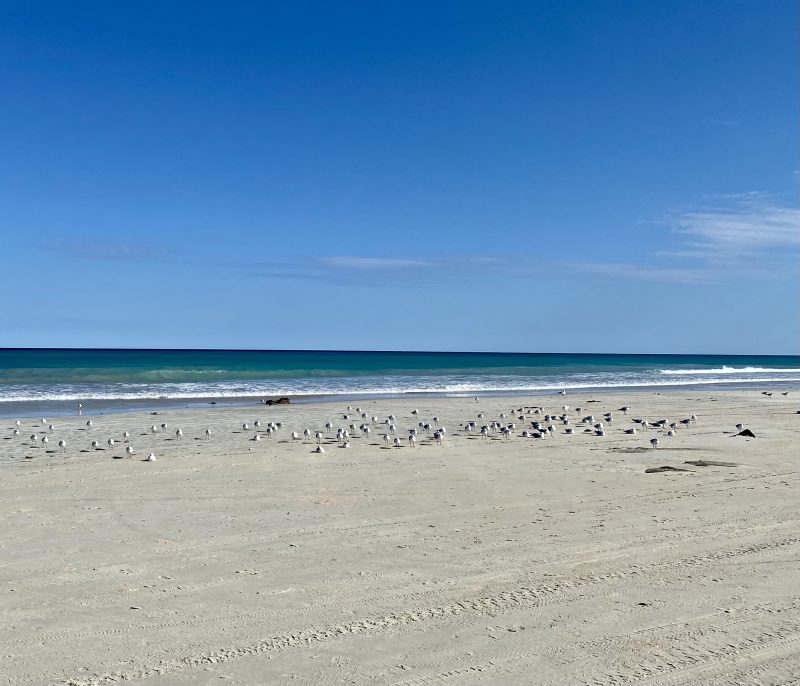 The next day, due to our ‘modified’ ‘Rover’, we decided we had better head straight back to Broome.  Initially, as we were sticking to our self-imposed speed limits, our return trip continued as smoothly as circumstances permitted.  That is until after we had stopped for morning tea, near a creek.  Tea break finished, we jumped back into the ‘Rover’, started her up and …

Fourth mishap:  For reasons unknown, we were stuck in 3rd gear!  Trying to take off in 3rd gear high range simply stalled the vehicle.  The only solution we could come up with was to drive in low range 3rd gear all the way back to Broome. (Luckily, we could disengage the front free-wheeling hubs, so that we weren’t stuck in 4 Wheel Drive – which could have caused even more damage.) At least it solved the problem of keeping our speed down due to our earlier mishap!  We limped into Broome late in the afternoon, with a lot of explaining to do.  The office staff, especially the Sub-Collector, couldn’t believe that so much had happened in a relatively short 5-day trip, neither could we …

Moral of this Story – If it can go wrong, it probably will!