By PA Sinclair*, our Shipping Correspondent

Fremantle Ports doesn’t seem to have the congestion causing havoc found in so many other ports throughout the world. There are currently only two vessels in the inner harbour.

In February this year, Fremantle Ports managed the largest throughput of full containers in the port’s history, 60,284 TEU – off-loaded from 27 container ships, four more than the previous month, in 28 days with minimal dwell time (the time truck drivers spend at facilities waiting to drop-off or pick-up loads).

This has been aided significantly by Rous Head’s Congestion Management System (CMS), 60-bay Truck Marshalling Area (TMA) and rail system which transported 24 per cent of containers in March.

In addition, 12,554 empty containers were managed, this is where the big bucks have been made by carriers globally since 2020 as freight rates skyrocketed and block-space agreement contracts held shippers responsible for paying for dead freight, space they were contracted to fill but failed to occupy.

By way of interest, here are some Marine Traffic images showing just how much traffic there is around parts of the globe. Cargo ships are green. The red ones are tankers, orange fishing vessels and black are miscellaneous vessels. The purple and blue are leisure and passenger vessels. 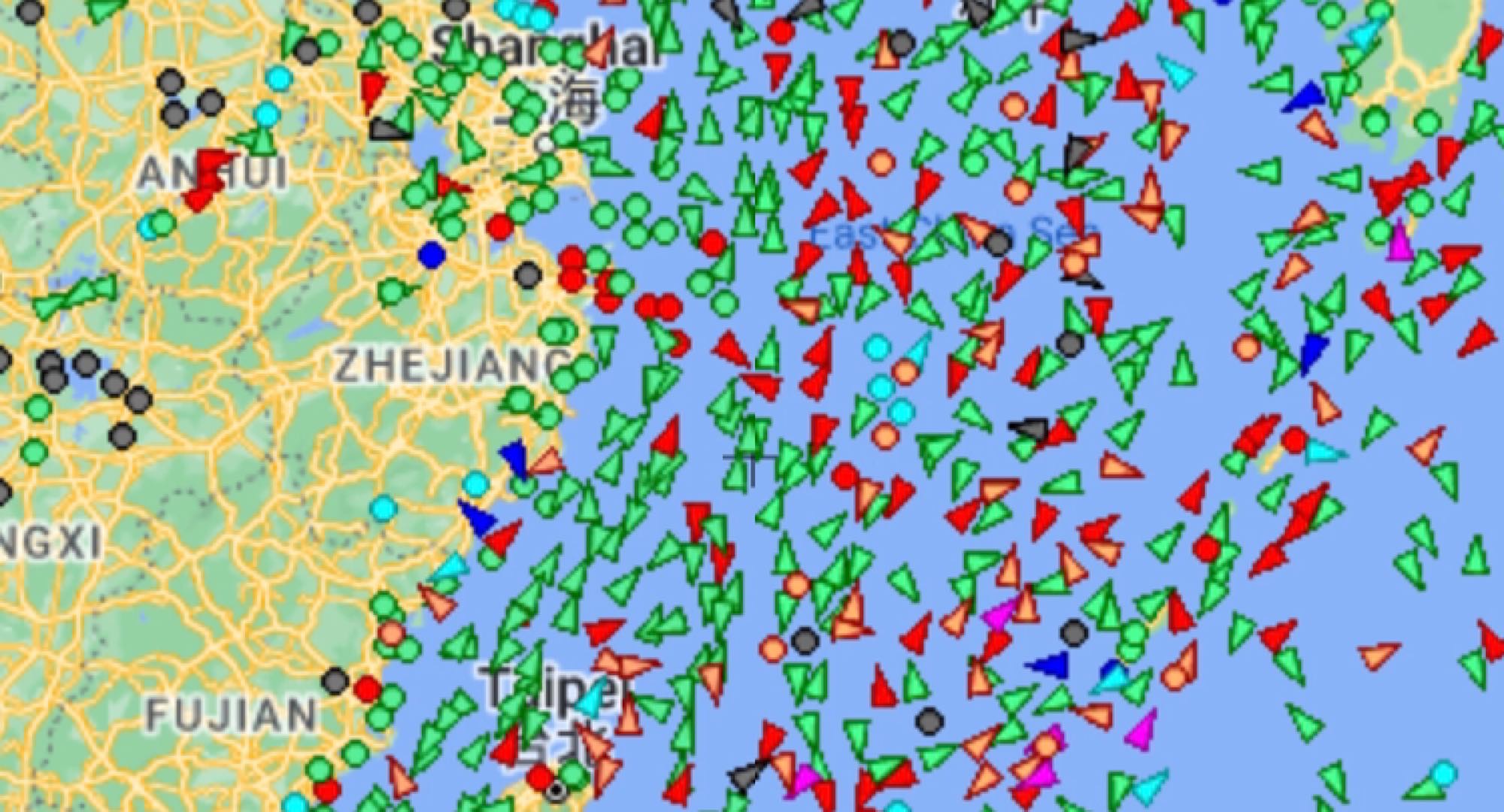 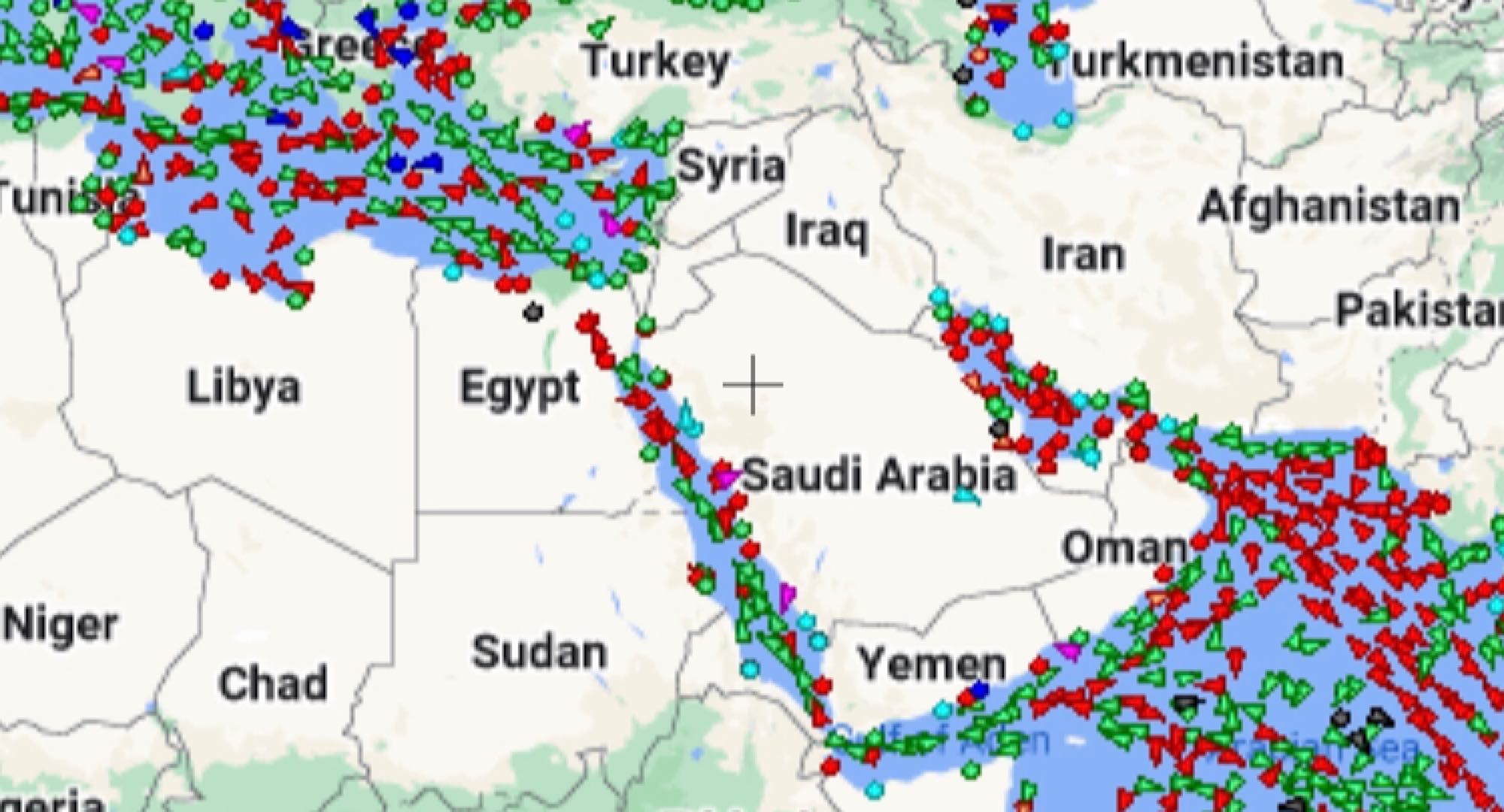 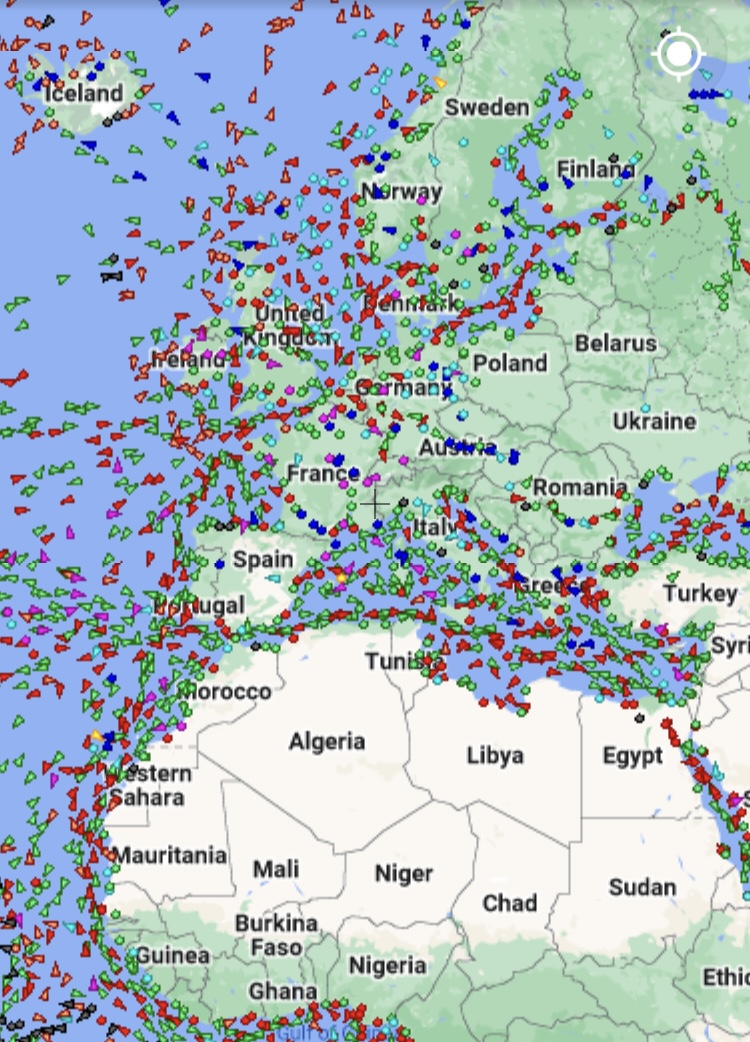 Freight rates increased 64 per cent during the pandemic. In some cases, containers were $2,491 per TEU, an increase of $1,900 per container. With a falling spot-price, 87 per cent of contracts are being renegotiated, in some cases shippers are simply reneging which could catapult port congestion back to the 2020 apex volumes whereby vessel capacity was reduced by 14 per cent because of congestion, they were stuck.

Vespucci CEO, Lars Jensen offered two scenarios in a podcast with Project 44’s Mike King on The Loadstar: “It’s exceedingly difficult to see how this is going to pan out,” he said. “It can go one of two ways. We’ll see okay growth of 3 to 5 percent, or consumers will reign in their spending and we’ll see a massive drop in container volumes over the coming years.

“There has been a ten per cent decrease in inventory restocking over a span of four months, manufacturing and exporting are slowing in China, there is no economic positivity in Europe, and the International Monetary Fund has forecast a decline in global GDP.”

Issues with Ukrainian produced neon affecting trucking, especially in the USA, is another geostrategic dilemma impacting congestion, according to Mr Jensen.

Mr Jensen said port problems such as space shortages, strikes and lack of warehouses contribute to port congestion and rising freight rates which he says have added to global inflation to some degree.

He predicts a strong peak season and shortage of capacity a month from now.

Some suggest the global economy is showing signs of weakness because of the 2050 zero carbon emissions target. Shipping companies are spending their significant profits on building new vessels to replace old and leased ships in an effort to meet the International Maritime Organisation’s set deadline of a five per cent reduction in five years – the same target Fremantle Ports have committed to as discussed in last week’s Maritime Movements.

CSBC VP Chou Chih-ming said shipping companies are complying, replacing old ships with new.
“Shipping companies have two options, one is to build new ships, the other is to slow-steam existing vessels.”

They are building four 2,800 teu ships speculatively and already have ten companies bidding to lease them. The boxships will be delivered by Q3 23.

Though green carbonised ships are not quite “mature” at this stage, CMA CGM have shortlisted China’s Dalian Shipbuilding to build five 15,000 teu methanol-fueled vessels. 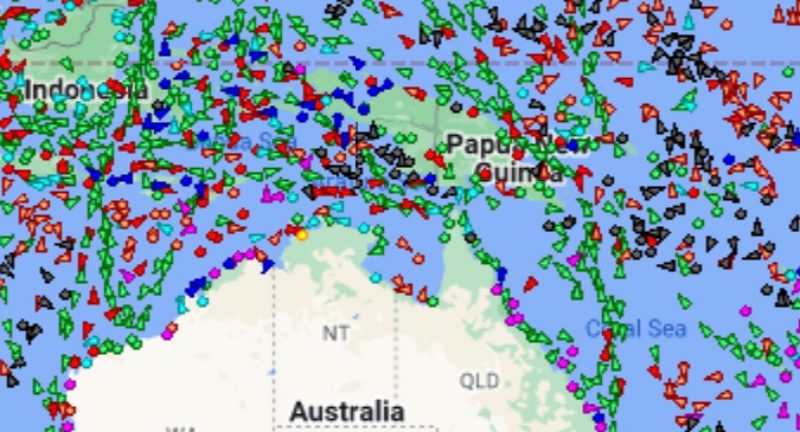 This Marine Traffic image shows the number of cargo ships off our Australian coast alone – they are the green ones. Again, the red ones are tankers, orange fishing vessels and black are miscellaneous vessels. The purple and blue are leisure and passenger vessels.