The Artania – A Heartfelt Farewell

Here at the Shipping News, we take a moment today, Monday 20 April 2020, two days after the cruise ship Artania departed Fremantle on a gray, misty Saturday, just after lunch, bound for Benoa, Bali, and eventually to Europe, to reflect on the circumstances of her arrival here in Fremantle; her being here; and her leaving.

We do so because her departure marks if not the end of, then at least a significant moment in, the telling of the covid story from an Australian and, particularly, a West Australian perspective.
That story includes, at front and centre, the determination of Mark McGowan, the Western Australian Premier, not to allow a repeat of the covid crisis that arose in NSW, and beyond, following the uncontrolled embarkation of passengers from the Ruby Princess in Sydney on 19 March, when it was known or feared some were showing covid-like symptoms. Soon after disembarkation, some were found to have covid. Deaths and widespread infection followed. As we all know, the circumstances in which disembarkation was allowed are the subject of a NSW Police investigation, as well as private legal action by affected passengers.
The immediate story surrounding Saturday’s departure of the Artania from Fremantle has been well covered elsewhere, for example, by Nic Perpitch for the ABC as further reported in The New Daily and by Daile Cross in WA Today.
The Artania, we will recall – perhaps a little imperfectly, if not hazily, at this point in time more than three weeks removed from the event – arrived just after the Magnifica arrived in local waters.
Both were laden with passengers and crews. Both were seeking to make unscheduled port calls. Passengers and crew were not intended to disembark. Just what their intentions were, were not entirely clear. Were they wanting just to take a breather here? Or to refuel and re-provision? Or just stop and await further instructions from their owners? 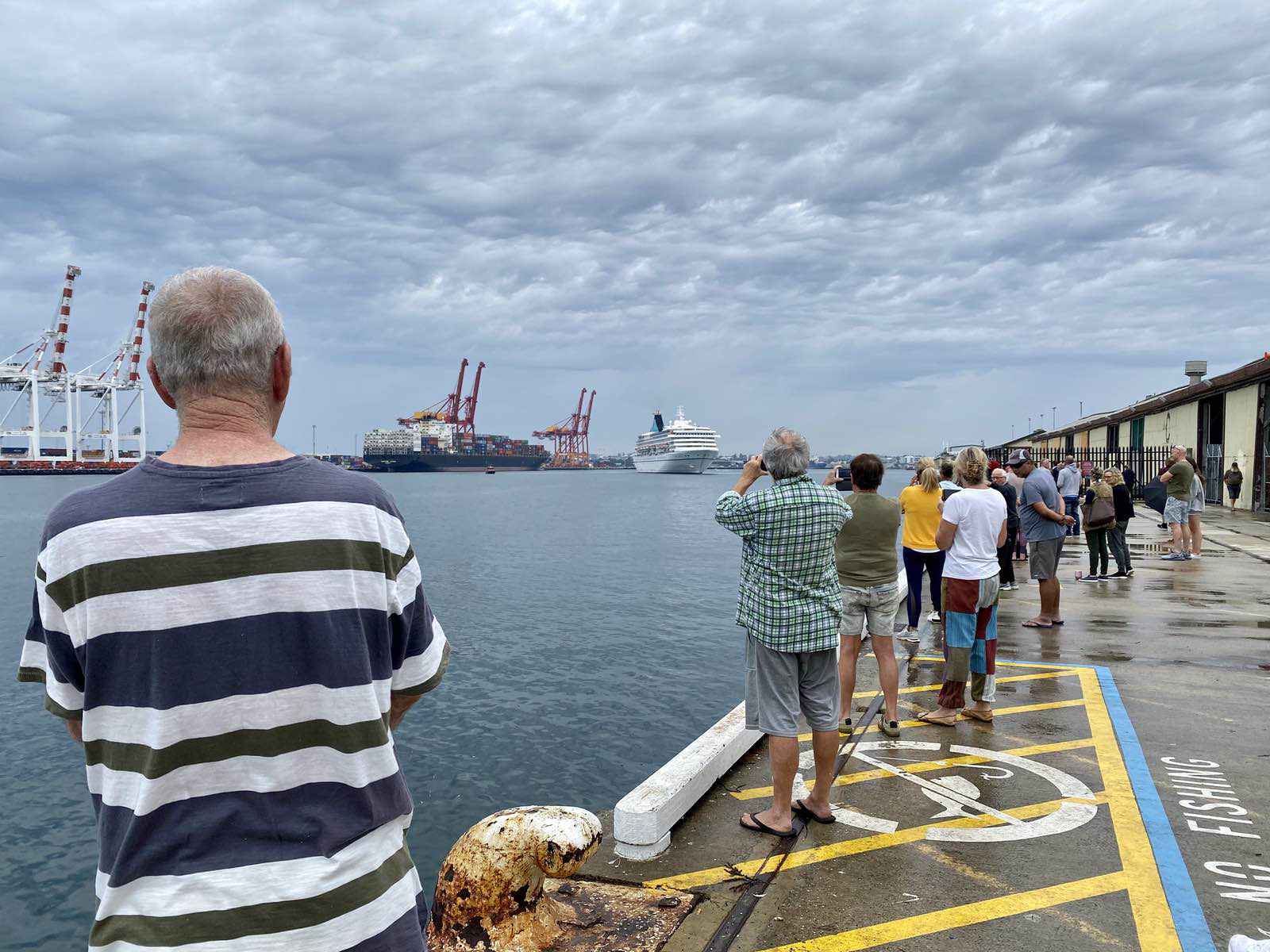 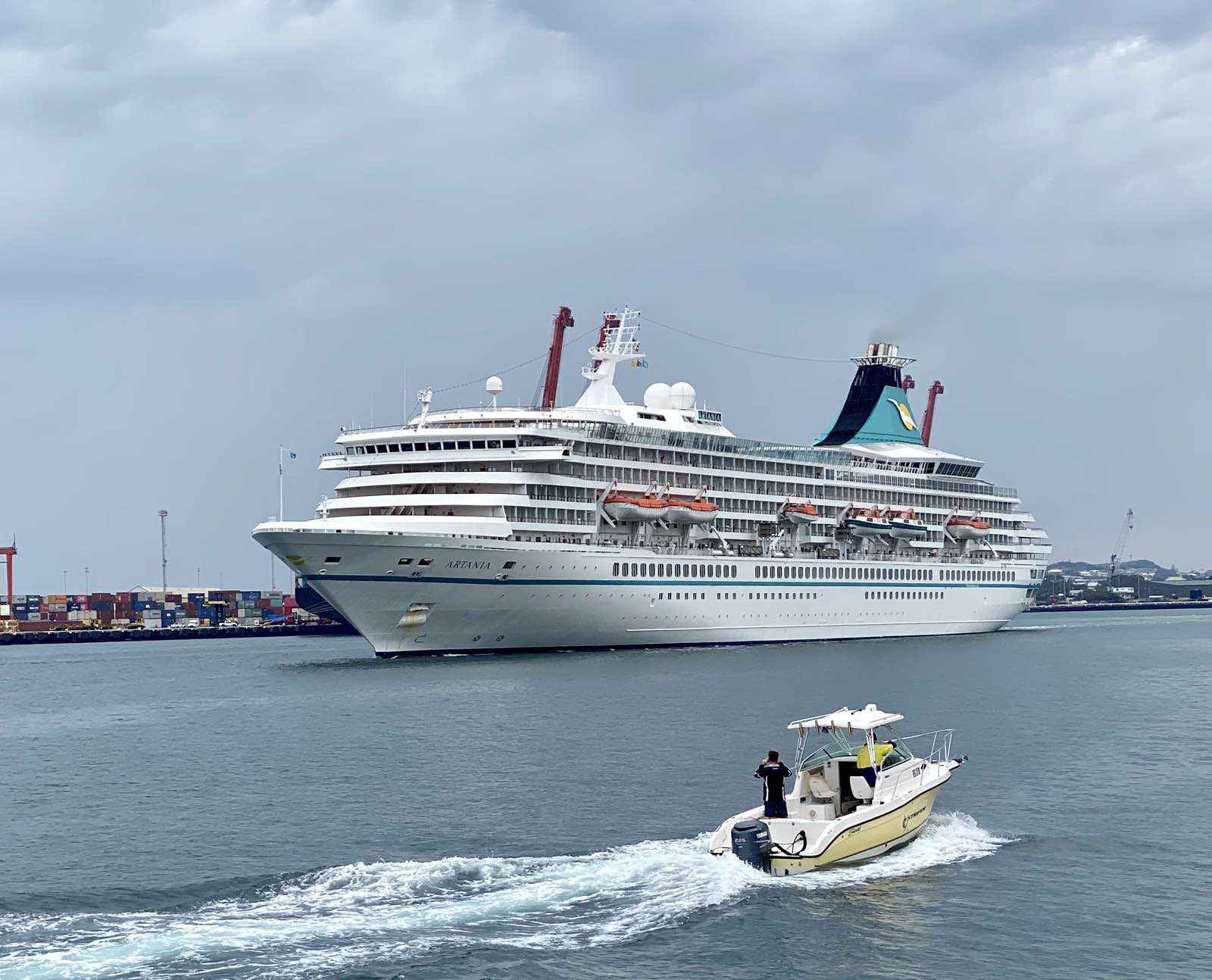 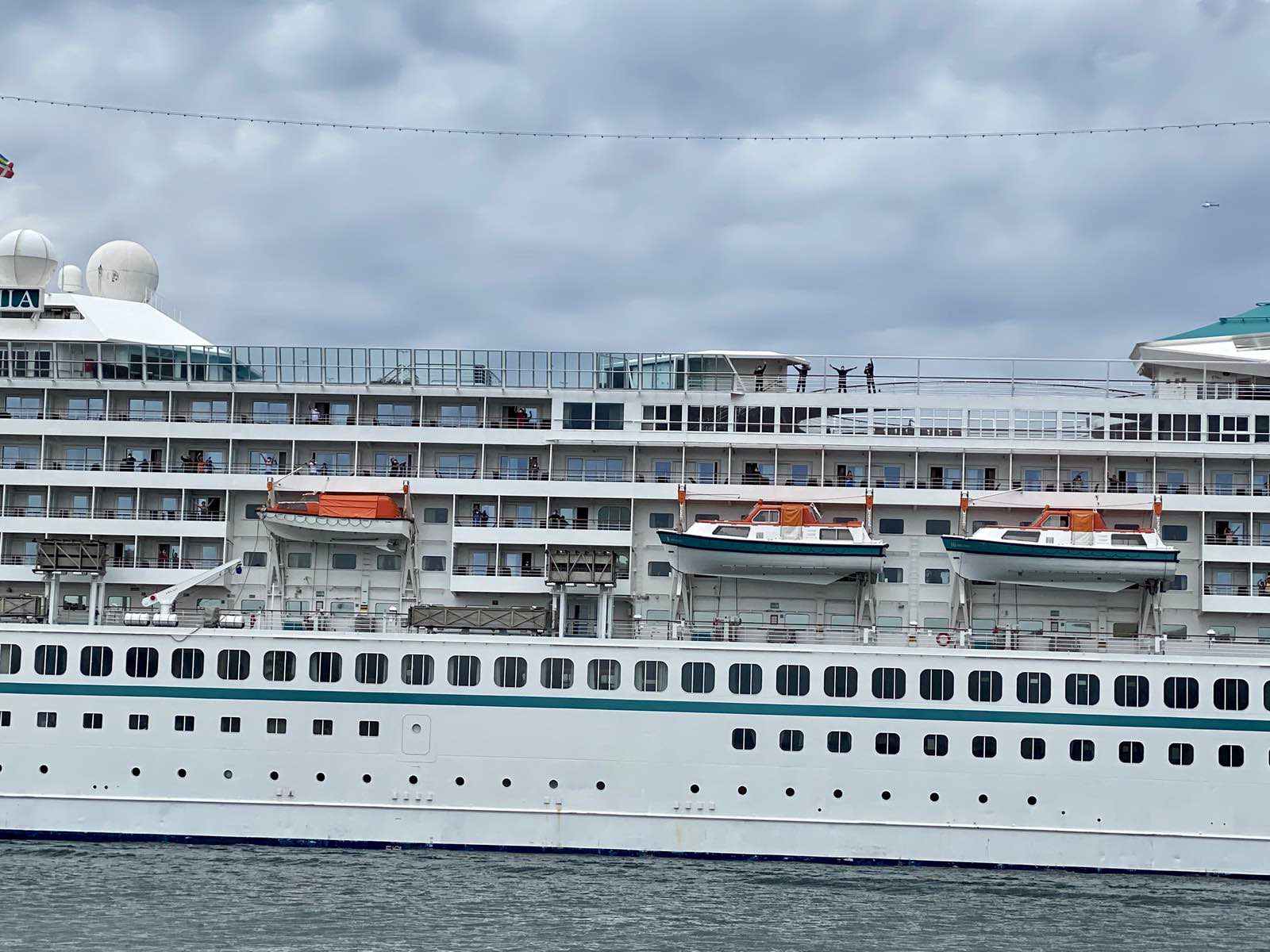 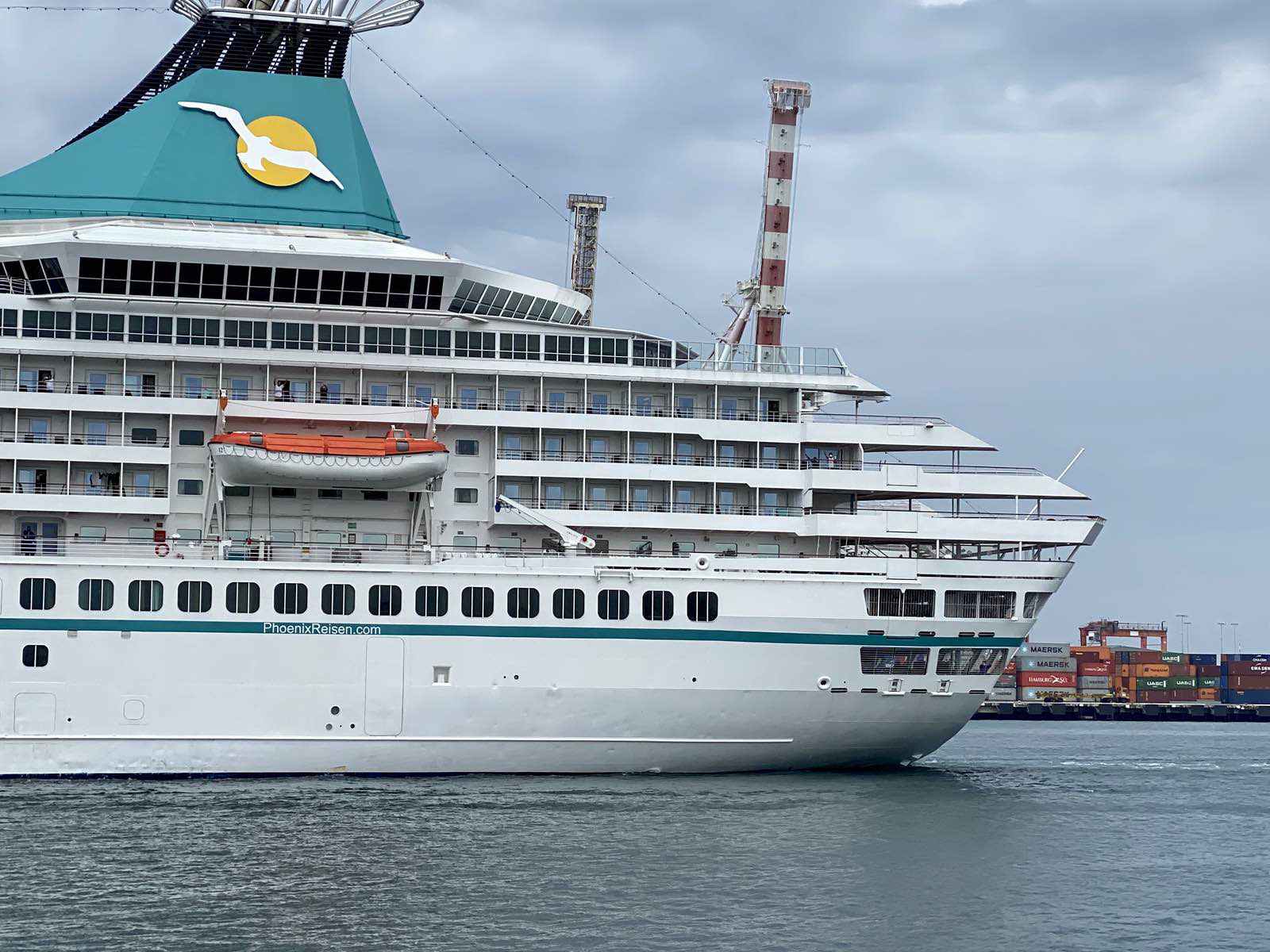 Just by way of a reminder, we in Fremantle had cruise ships coming out of our proverbial ears at this point. Look at this snap we put up on Shipping News on 16 March showing Queen Mary 2, Costa Deliziosa and The World, the crazy star-moving The World, all in Port together and then there were the others as well.
The Magnifica tied up in Port on 25 March. Here is our arrival picture of her. She was meant to depart for Singapore the next day. But she didn’t. Instead she finished up lurking in Gage Roads, eventually anchored just off Garden Island.
On the same day, 25 March, the Artania’s German charter company said she was steaming home to Germany. At that point she’d been in Australia’s East. On 26 March she steamed towards Fremantle, apparently with a sick person or two on board. Plainly her Master hoped help would be available. In the event, it was.
In passing, by international law of the sea, there is a duty on masters of vessels to render assistance to those in distress at sea. The Tampa Incident, from nearly 20 years ago now, is a reminder of that. And countries, like Australia, must also fulfil this obligation. Australia, by the Commonwealth Government, could be seen as fulfilling this responsibility by sending doctors on board to assess the sick, as challenging as that sometimes may be. When the vessel itself is in distress, the international law of the sea allows for it to enter a port of refuge.
From the State of Western Australia’s perspective, though, the Premier wanted neither of these ships, nor any others like them, to linger at or near Fremantle. He recognised, however, that Australia, by the Commonwealth, had certain responsibilities.
The Magnifica it seems was not reporting any ill passengers or crew. She left, eventually, after holing up off Fremantle and Garden Island for a number of days. She left for Colombo on the evening of 29 March to much social media fanfare, including on the Shipping News.
The Artania, with a number of covid affected passengers and crew, however, did not leave.
We told the evolving story of the Artenia, and that of Magnifica’s departure, here on the Shipping News.
By the time the Artania departed our shores on Saturday just gone, the Artania was responsible for 79 of Western Australia’s 541 coronavirus cases. As it transpired, there were unfortunately a number of covid cases on board the vessel.
She was one of the Premier’s cruise ship ‘nightmares’, as he had referred to the then continuing presence of cruise ships off or near WA shores.
Three people from the Artania died from covid while in WA, including a 42-year-old Filipino male crew member who passed away in Royal Perth hospital last Friday.
A number of covid affected passengers and crew were hospitalised in Perth.
Most of her passengers, however, disembarked in Fremantle and soon after flew to Frankfurt on specially chartered flights.
Whether or not Artania, following the initial passenger and crew embarkations, would then, immediately, herself depart became something of a drama. She was reluctant to do so. The Master of the vessel spoke on Gareth Parker’s morning program on local radio 6PR. He won admirers and supplied a human dimension to the ship’s plight. Nonetheless, many in the community wanted to see the ship gone, not the least the Premier. 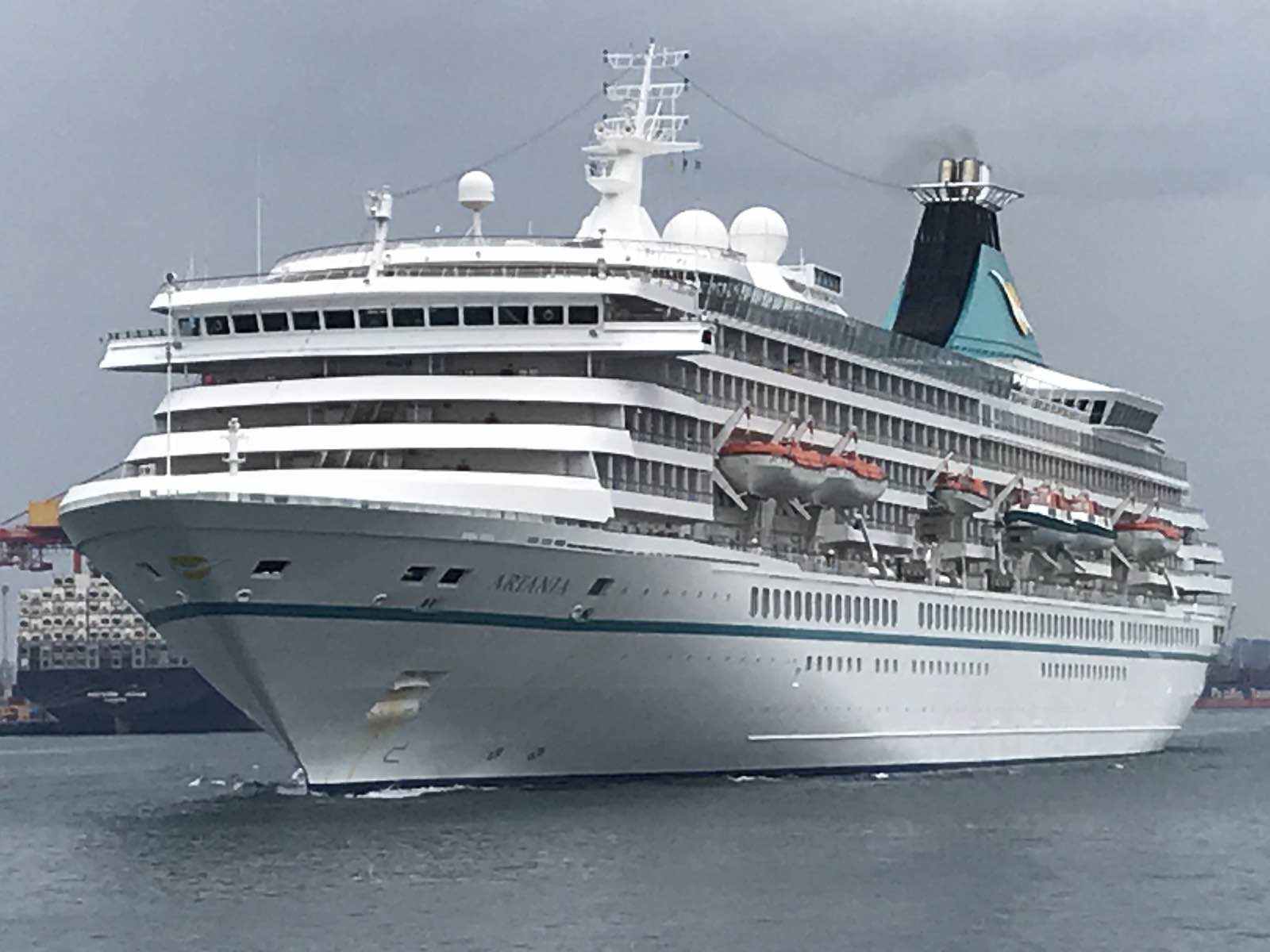 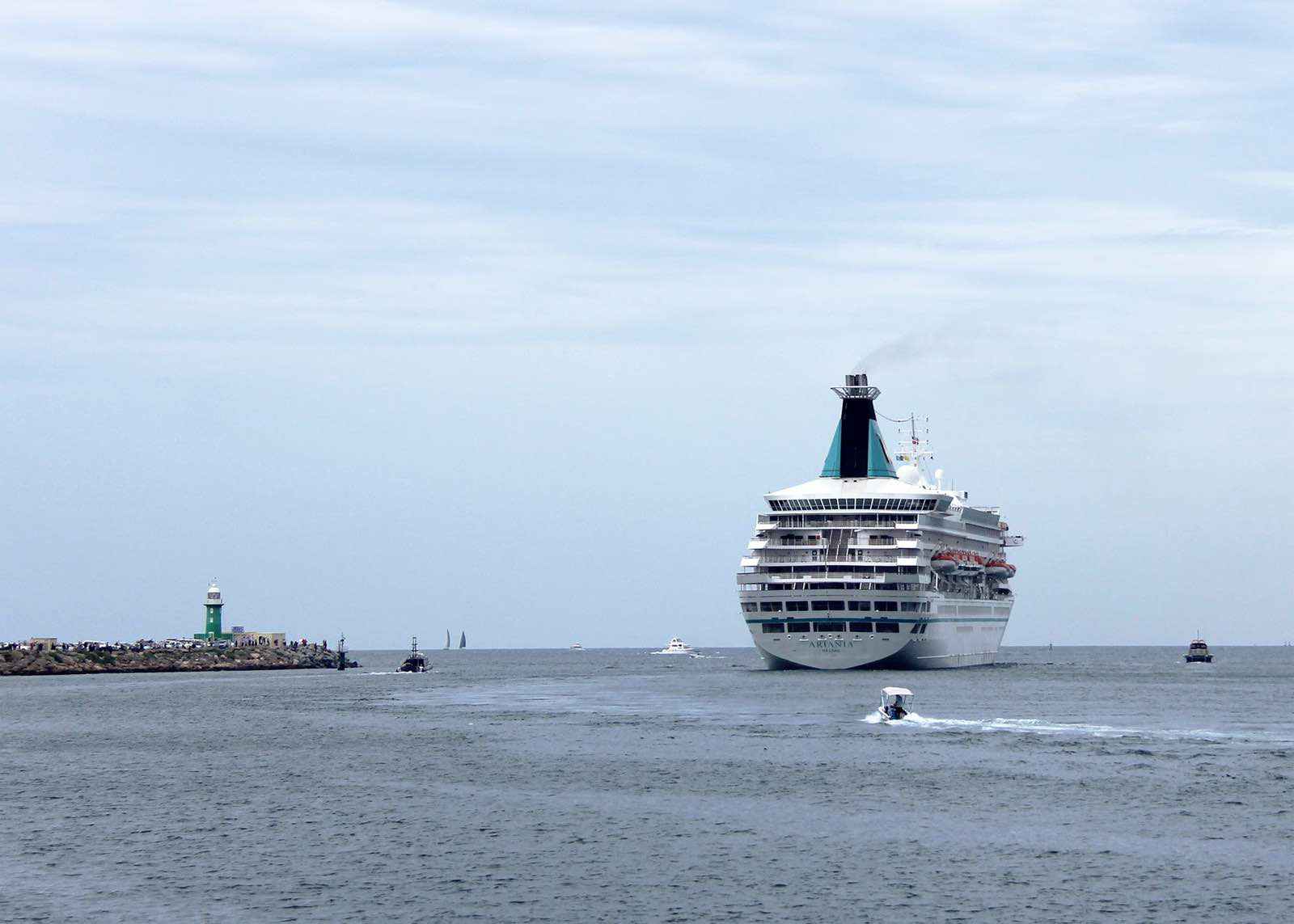 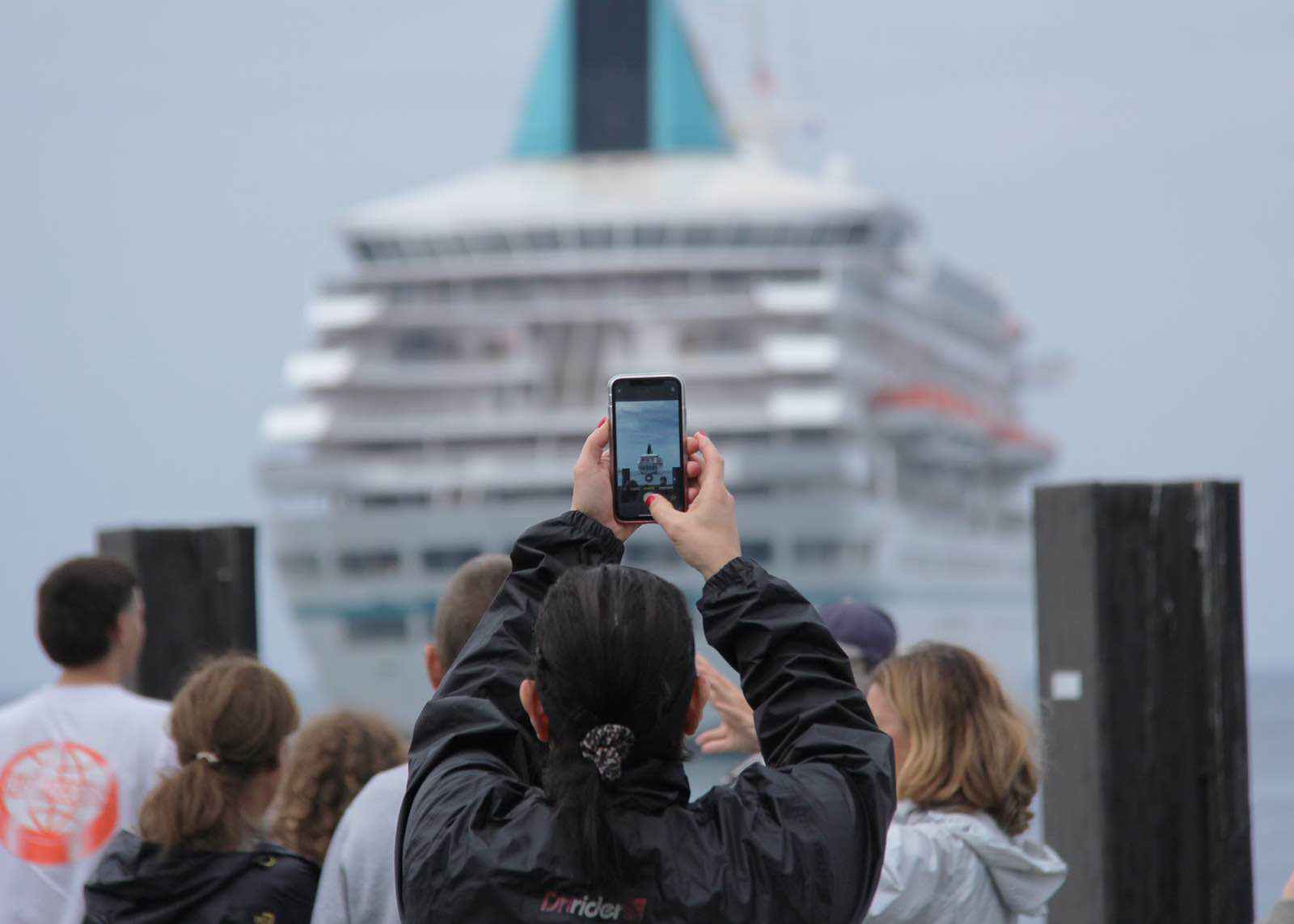 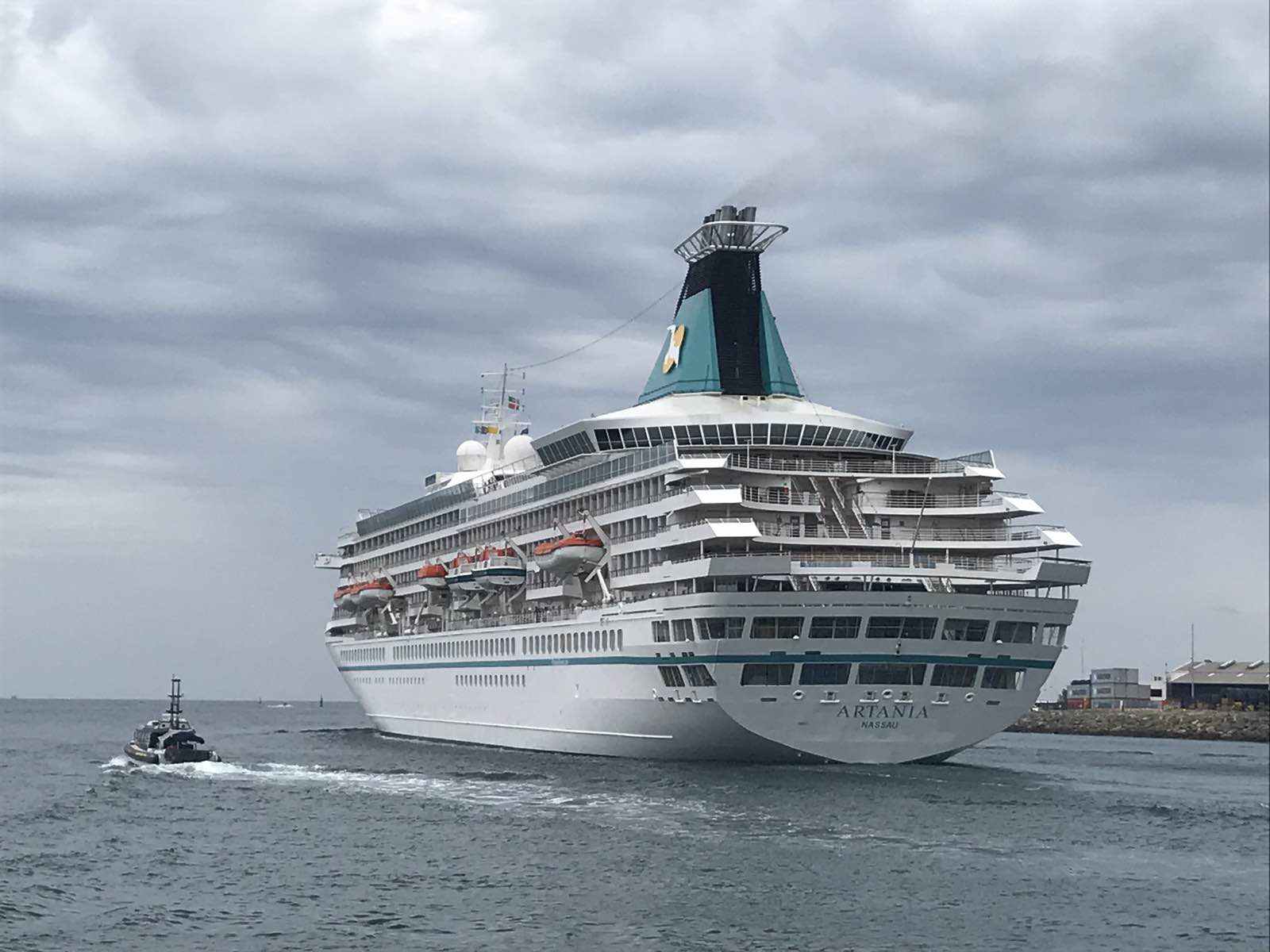 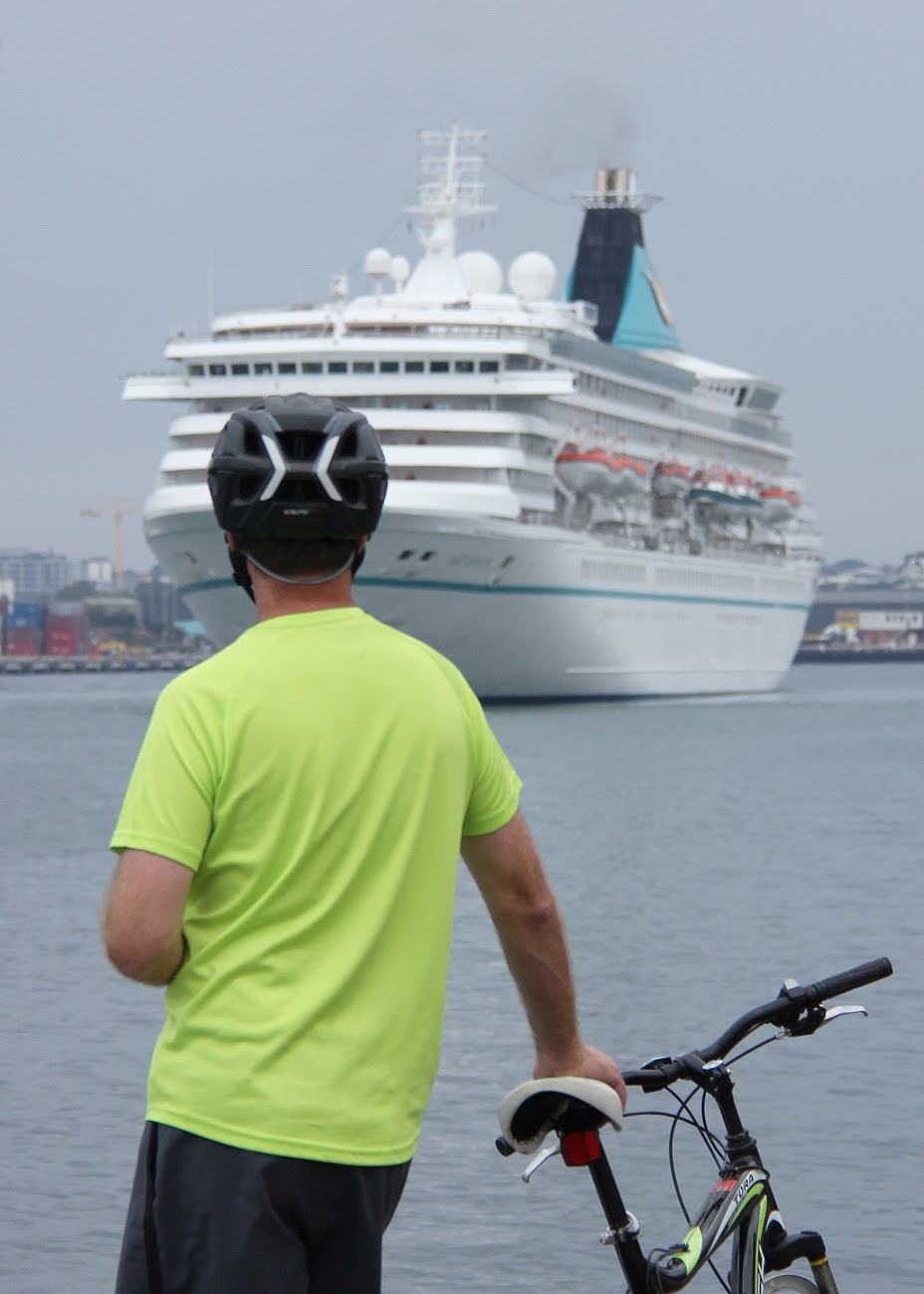 In the result, the ship remained another 14 days after the mass embarkation, by arrangement with the Commonwealth Government and all relevant authorities. This provided the opportunity for a 14 day isolation period to be enforced, for any further cases of illness to be dealt with properly, and for the ship to be disinfected before arrival at her next port of call.
Then, on cue and on time, in front of good-sized, socially-distanced gatherings, Artania pushed off from Victoria Quay passenger terminal at 1 pm on Saturday 18 April 2020. Like many others, we from the Shipping News were there to witness the occasion, and what an occasion it was! The Artania was an impressive sight as she headed for home.
The Artania’s final departure was not without final dramas, however. During Saturday morning, Fremantle residents were asking us, at the Shipping News, on our Facebook page, about the comings and goings of police vehicles and buses at the Port.
It seems two separate things were happening. First, 60 people from the Artania, including – according to Nic Perpitch – musicians carrying their instruments, were taken to a hotel in Perth’s CBD to undergo covid monitoring before flying out of Perth on a specially chartered flight. As of today, 58 of them have flown out from Perth, according to the Health Minister, Roger Cook. It seems two remain for medical reasons.
Secondly, reports tell us that some crew members who had earlier left the ship, around 30 or so – and possibly including a handful of passengers, we are unsure as the full story is yet to be told – were returned to the ship. A swap of sorts.
But the drama didn’t end there. Then, we are told, before the the ship pulled out at 1 pm, two crew members were married on the wharf in Fremantle, just near the Artania’s gangplank at the passenger terminal. Talk about Love in the Time of Covid! (We have mentioned in an earlier story Gabriel Garcia Marquez’ fabulous novel, Love in the Time of Cholera.)
While we from the Shipping News were there at the Port in various locations to witness the departure drama, we didn’t get to witness the wedding!
However, the photographs we feature with this story, taken variously by Brett Leigh Dicks, Jean Hudson and Michael Barker, catch much of the action and spirit of the occasion, from the Artania pushing off the wharf, to making her impressive, sweeping turn in the Inner Harbour, and then as she proceeded out to sea, with horns blaring, and everyone on board and lining the harbour and the Moles, North and South, waving and exchanging good vibes.
We can report that, as much as on social media, including on the Shipping News’ Facebook page, some were, in blunt terms, wishing Artania ‘good riddance’, far and away, both at the Port and on Facebook, the people of Freo and beyond were wishing Artania, and her Captain and Crew the very best wishes for a safe voyage home.
Many at the Port witnessing the Artania’s departure sensed the importance of the occasion. There was more than a touch of emotion in the air. The sentiments expressed by those watching were plainly heartfelt.
It seems we all recognised that the covid ship cruise saga that has, in many ways, kept West Australians engrossed, and a little fearful, for some weeks, is at long last over. We certainly hope so.
But it was much more than that. Standing on Victoria Quay, which has seen so much since she was opened to sea traffic in 1897, some 123 years ago on 8 May, including ships departing with soldiers – our fathers, grandparents and great grandparents – to fight in the First and Second Wars, one sensed that the memory of this departing vessel will be long be with us, a stark and melancholy reminder of what it was like in the time of covid.
As Artania steamed away, the prevailing sentiment was of regret, and thought, not only for the ship, and for all who were on board or who had been on board her during these most difficult of times, especially the ill and those who had passed away in Perth, but for all in our community who have been hurt by covid and lost loved ones.
In its wake, Artania also left a strange sense of hope, and a belief that we really can deal with covid in the here and now, and in the future.
Share this
Related Articles