Only a few days after the Foxy Lady II – The Hash Stash story was published in the Fremantle Shipping News I got an email from the editor, Michael Barker. He had been contacted by a couple who were reasonably sure that ‘Foxy Lady II’ was actually, now their yacht.

I had never given any thought to the fact that the vessel might still be afloat. As it transpired, not only did it still exist but it was happily moored in the Hillarys Marina, only 60 km away from where I live!

Thinking this too good to be true, I tentatively contacted the new owner, Mark Crownan. We had a good chat on the phone and I was invited to visit and check out the yacht on the following Sunday morning. He also informed me that the yacht is now called ‘Sunshine’ and he and his partner, Stephanie Cheshire had owned it just on a year. Mark then sent through some photos of ‘Sunshine’ at her berth in Hillarys Marina. Comparing Mark’s photos with the photos I had from 34 years ago, I soon realised this probably was the same yacht.

The grain of the plywood door confirmed for me the yachts’ identity.

Early the following Sunday morning I set off for Hillarys Marina. On arrival I was met at the gate to the boat pens by Mark, who quickly ushered me to ‘Sunshine’. I was introduced to Stephanie and stepped on board. Stephanie already had the kettle ‘on’, so I was already feeling welcome. Because of my connection to ‘Foxy Lady II’ (assuming it was the same yacht), it was not long before I felt like a long lost ‘uncle’.

On purchasing the yacht Mark and Stephanie had been told that it had been seized by Customs for smuggling drugs but had assumed it was just a ‘story’. I had copies of photos with me that had been taken by one of the Federal Police guys, 34 years ago, on ‘Foxy Lady II’ after the drugs had been discovered. We started comparing photos with the vessel and it was soon obvious that it was indeed the same vessel. 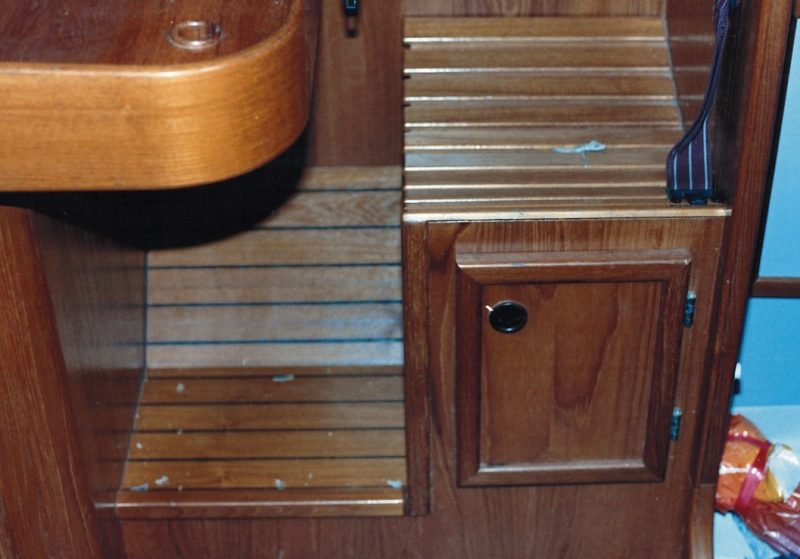 The clincher was when Stephanie compared the photo (above) with the same door on ‘Sunshine’. Although the vessels are ‘production’ yachts (making them identical), there is no way that the grain on the plywood of the door would be identical on different yachts – but it was, not unlike a ‘fingerprint’ match. We soon found many more ‘fingerprint’ matches.

Now intrigued, Mark decided to remove the chart table to see the ‘hide’ for himself. It was a bit harder than I remembered and I wondered how I had managed to get a couple of the ‘very hard to get to’ screws out with a limited selection of tools, all that time ago. 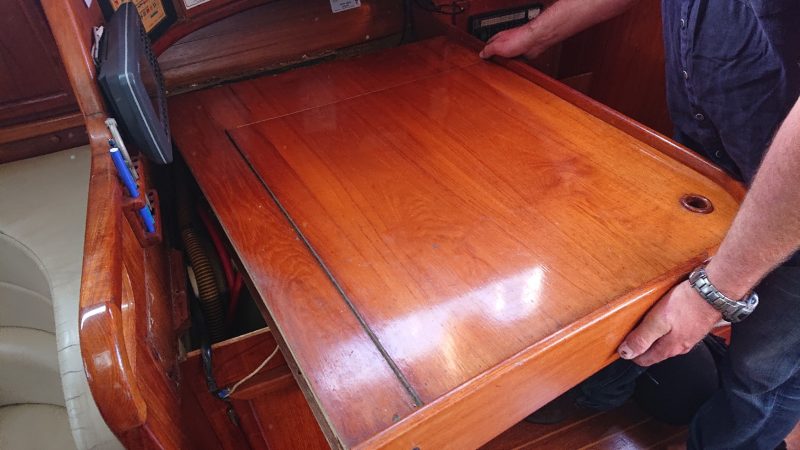 Before long, Mark (who coincidently is a carpenter by trade) had removed the chart table completely, revealing the aluminium fuel tank underneath. At the top of the tank, on the starboard side, immediately adjacent to the hull was what remained of the fibreglass material that had once sealed the gap, concealing the 9x packages of hashish.

Unfortunately, the 50mm (grey) conduit pipe has come unstuck from the side of the vessel, falling down and reducing the original size of the gap. The copper pipe, below the conduit, has also moved away from the hull, reducing the gap even more. We didn’t need any further convincing; this was just the icing on the cake – it was without any doubt – ‘Foxy Lady II’. 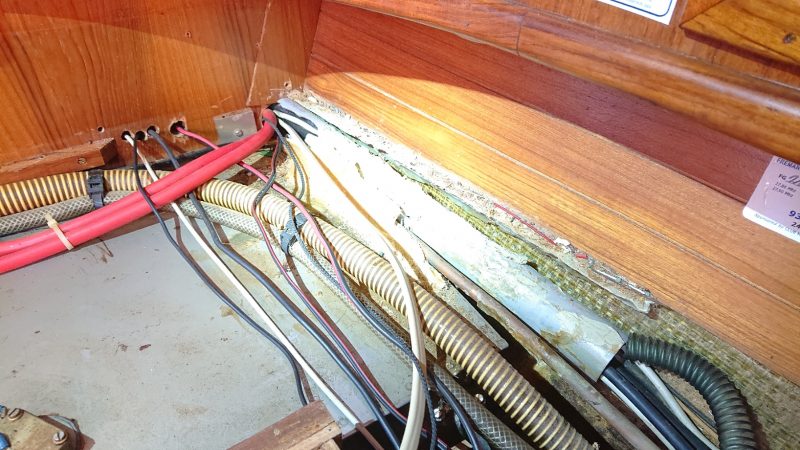 The kettle was re-boiled for the third time (we kept getting distracted) and we finally had a cuppa and sat down to reflect on now and then, ‘34 years ago’.

Whilst enjoying our delayed cuppa, Mark produced the paperwork for when the yacht was registered as a ship for the purpose of identity. The name of the yacht on the Registration Certificate (1993, coincidently also in May) was ‘Sunshine’. The owners were Ron & Pat Wilson (of Wilson Marine – Fremantle Sailing Club). That’s when another amazing fact was revealed, apparently Ron & Pat circumnavigated the world in her over a period of around 16 years, including approximately 7 years in the Mediterranean! (I have not, as yet, confirmed this but have a feeling it could be true.) 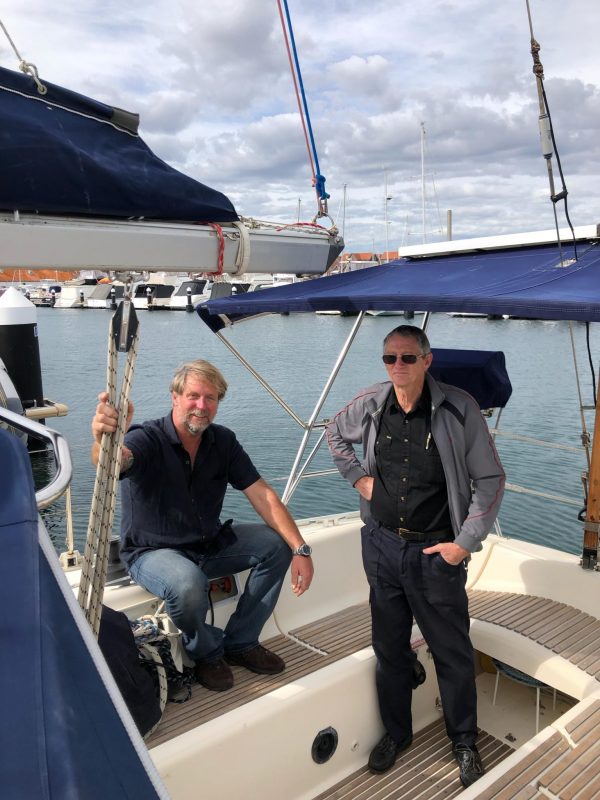 At one point, whilst standing in the cockpit, I found it hard to believe that I had stood there 34 years previously and since then the yacht had travelled many thousands of nautical miles circumnavigating the world. If only this yacht could talk, there must be a multitude of stories to tell, far more than the average yacht. 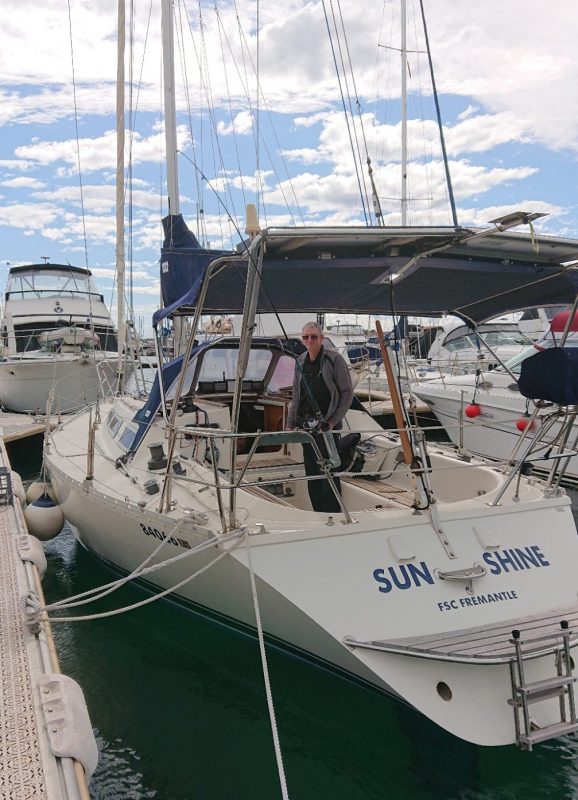 Bernie on board recalling events of 34 years earlier