By PA Sinclair, our Shipping Correspondent

Do you recall when the RORO, Grand Pioneer and the general cargo ship, AAL Fremantle were involved in a collision with the Fremantle Rail Bridge on August 17 2014? I’ll bet some of you do!

Winds were forecast at 28 to 33 knots but at the time the lines broke at 2200, a 55-knot wind gust blew. All the stern and mooring lines payed out on both the 190 metre car carrier and the 140 metre general cargo ship, berthed astern. It took eight minutes between breakaway to contact and five hours for tugs, pilots and crew to re-secure both vessels to their berths again. 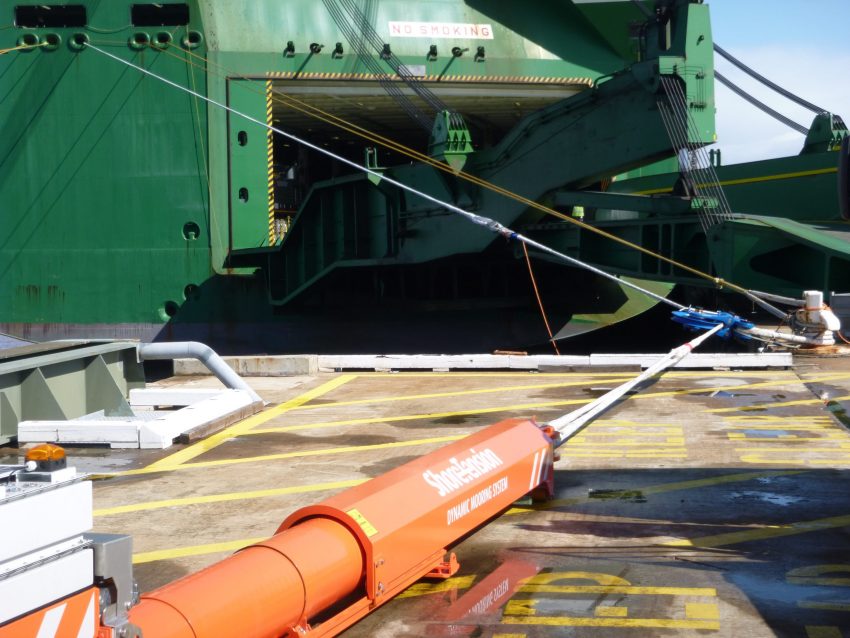 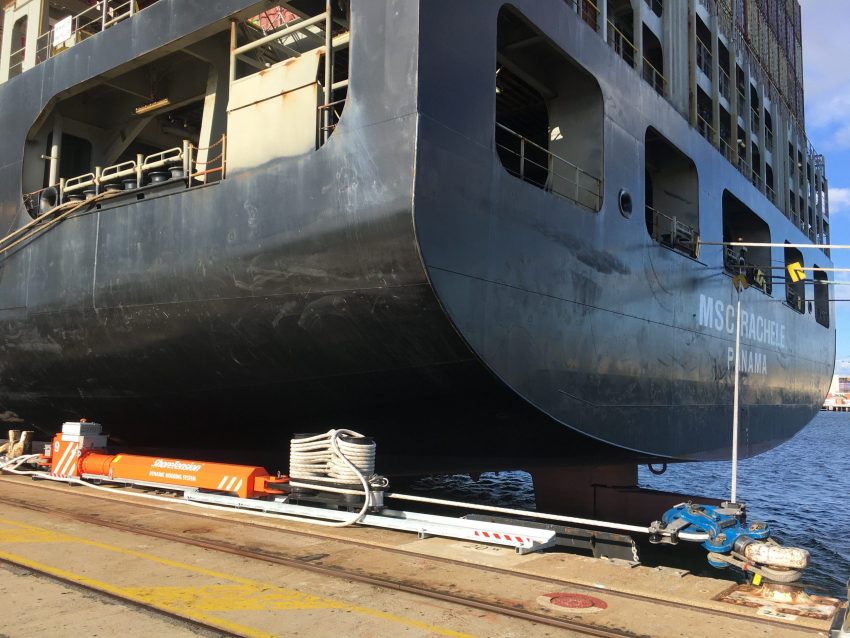 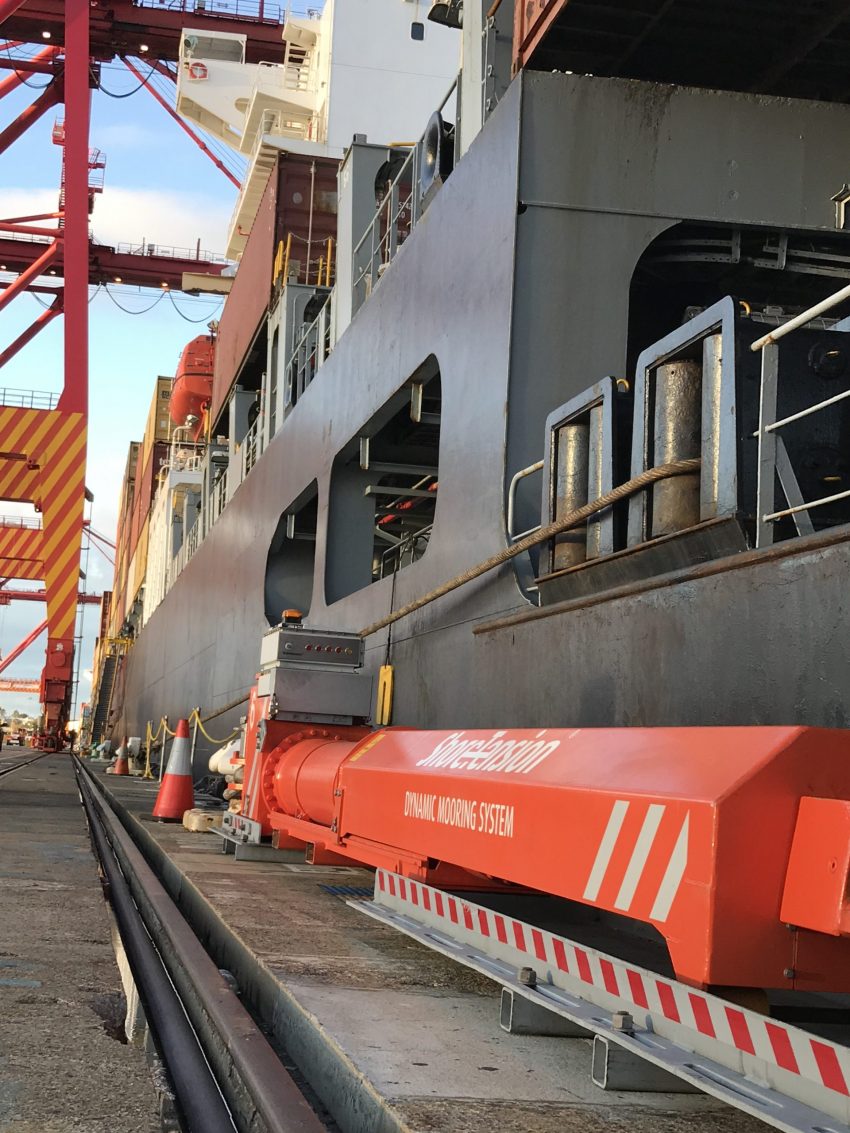 Now the Fremantle Ports have twelve mobile ShoreTension® Dynamic Mooring Systems to prevent large vessels in the Inner Harbour breaking away from berth during adverse weather events. Lloyds Register in London has certified the system’s safe working load for up to 150 metric tons for all types of vessels.

The lines reduce vessel movement up to 90 per cent. The systems are deployed all year around but are mostly used between June and September. There are 200 units throughout Australia. They have a lifespan of approximately 20 years and are serviced every four years. They cost just under $4m per unit. Depending on ship size and weather conditions, two to four units are required for the safe and stable mooring of vessels.

Ian Fryer, Trainer and Shore Tension Officer for the Fremantle Ports, says the system uses hydrolics to manage the tension on the lines which move like a rubber band.

The port has the capacity for up to six vessels.

“Ports have to deal with larger vessels with bigger lateral surfaces,” a spokesperson said. “The world is facing more extreme weather conditions.”

The principle behind ShoreTension is making sure that all the ropes which are payed out are at the same tension so they work together as one.

With the combination of wild weather picking up (the Bureau predicts a 50 percent chance of a La Nina event forming again toward the end of 2022, with a long-range wetter than average forecast), combined with increasing shipping movements (the port celebrated its largest monthly throughput of full containers in its history in February, with supermarket supply vessels being fast-tracked) and the building of a new rail and traffic bridge beside the harbour, safety must be at the forefront of the Harbour Master’s mind.

The Bureau of Meteorology says wind gusts can be 40 per cent stronger than the forecast and stronger still in squalls and thunderstorms. Maximum waves can be twice the forecast height.
The head of BOM’s long-range forecast team, Dr Andrew Watkins says the sea surface is warmer than average so we can expect above average rainfall for most of Australia in the coming months.

The shipping industry is mourning the death in May of Jasper Hooykass of Hutchinson Ports ECT Rotterdam, key partners in commercialising the mobile system and improving vessel safety at port during adverse weather events worldwide.

Thank you Fremantle Ports for the references and the images.

SHIPS IN PORT AND INNER HARBOUR 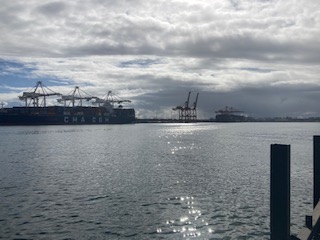 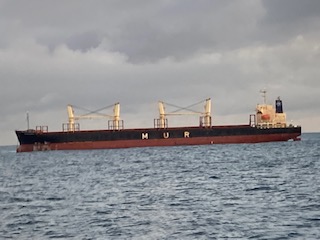 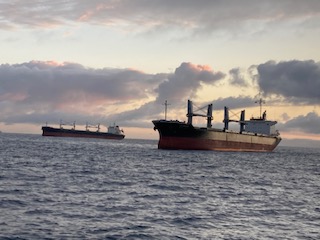 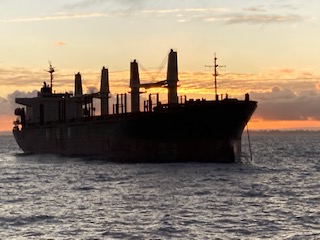 At the time of writing: at anchor amongst the 2022 Offshore Valmadre Cup Winter Series yachts are bulk carriers KS Grace from Vietnam sailing under a Panama flag enroute to Qingdao, our sister-city in China; and Nimble Nicky from Bayuquan sailing under the flag of the Marshall Islands, who is set to sail for Kuala Tanjung on Monday 27 June 2022.

General cargo carrier African Kestral is sailing under the flag of the Bahamas and has travelled more than 50,000 nm since 2021 and has visited 17 ports including United Arab Emirates and New Zealand. She seems to be sailing between Albany, Esperance and Fremantle for now.

There are currently two container ships in the Inner Harbour at present: Cosco Rotterdam sailing under the flag of United Kingdom and Atout sailing under the Liberian flag. Both are nestled snuggly in CT1 and CT2 enroute to Singapore.

OTHER MARITIME NEWS IN BRIEF

Fremantle port has just celebrated its largest monthly throughput of full containers in the port’s history, maybe something to do with fast-tracking cargo ships carrying fresh produce for supermarkets. Managing 1523 vessels per year equates to $31.34 billion annually. Hats off.

Adding a rail bridge for freight is estimated to decrease truck movements in community areas by 100,000 movements. Does this mean no more earplugs for residents? 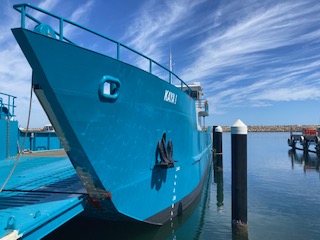 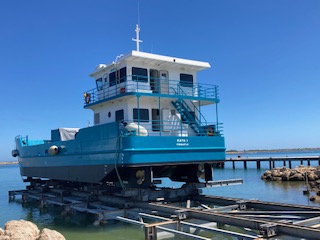 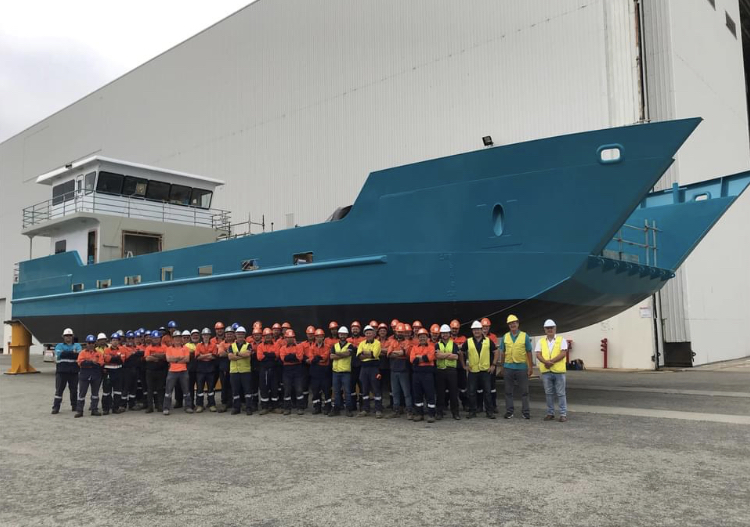 Pelagic Marine Services added Kaya 1 to their marine services fleet between Fremantle and Rottnest Island. Built by Mark Stothard’s award winning Echo Yachts, Kaya 1 is a pimped up Spinifex with a few vibration issues, according to crew, though she does sail a bit faster. 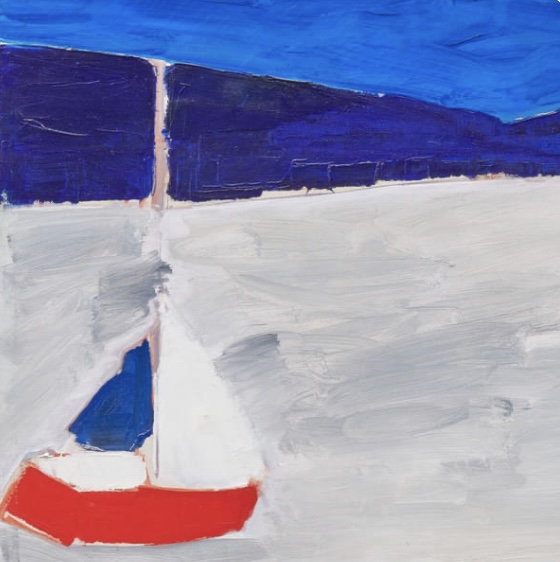 * By PA Sinclair, our Shipping Correspondent