Bernie spent many years as a Customs Officer and enjoyed many good times!

‘A boat is a hole in the water into which one pours money.

‘Maintenance is necessary throughout the entire life of the vessel whether it is used or not.’

These were the first two lines in the Maintenance Section of the Australian Customs ‘Marine Operations Manual’ that applied to all Customs Vessels (indeed it applied and applies to all vessels).

It was agreed at the ‘Marine Barrier Conference’ (Customs) 1982, held in Canberra –
‘That the crew of each ACV (Australian Customs Vessel) should do all the minor repairs and routine maintenance so that they gain intimate knowledge of their vessel and its equipment and are therefore more likely to be able to attend to problems which inevitably occur when the vessel is being operated.’

The Maintenance consisted of a detailed set of tasks/jobs specific to each class of vessel, to be completed and recorded every day, week, month, 6-monthly and annually.

ACV ‘Edwin Abbott’, based in Fremantle, was one of, if not the best, maintained vessel in the Customs Fleet. This had mainly come about by reason of the dedication of John ‘Bomber’ Wells (sadly now deceased). ‘Bomber’, ex-Navy, would clean and/or polish anything and everything to within an inch of its life. This, together with the scheduled ‘Maintenance’ system, kept the vessel in ‘tip top’ condition, ready for deployment at short notice.

You could almost literally ‘eat your dinner’ off the bilge in the engine room of ‘Edwin Abbott’. The bilges, under the two Cummins 555 engines, were white fibreglass gelcoat, and were given a wipe over at the start of every shift, at the same time observing if any new leaks had developed since the previous ‘wipe over’. There were several metres of copper piping running around in the engine room, consisting mainly of fuel lines and ‘hydraulic start’ lines. ‘Bomber’ also kept the copper lines polished and the overall result was quite startling.

‘Bombers’ dedication and results spurred the rest of the crew on, to also keep everything to do with the vessel exceptionally shipshape, clean and tidy. 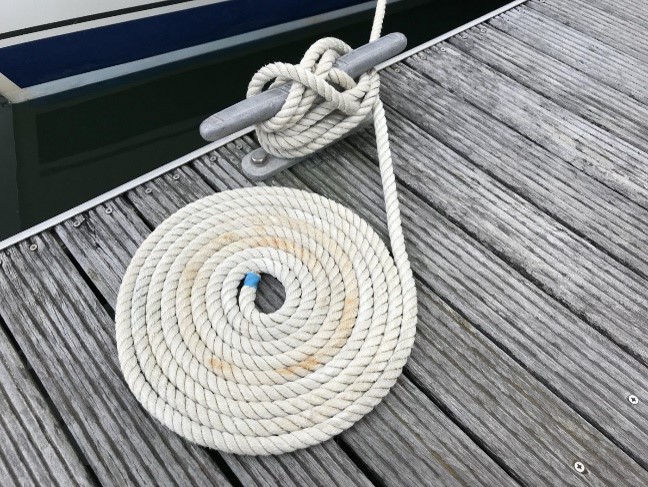 An example of a ‘cheesed down’ mooring line. This one is on the wharf, whereas we always ‘cheesed down’ on the vessel’s deck. ‘Cheesed down’ refers to the tail end of the rope being curled into a circular mat, to reduce tripping hazard and look very neat and professional

Whenever tying up to a wharf or jetty for any length of time, the mooring lines consisted of a line from the bow to the wharf, a line from the stern to the wharf, and two diagonal lines amidships creating an ‘x’ (these are referred to as ‘springs’). We could approach a wharf or jetty, come alongside, be tied up p, with all four mooring lines ‘cheesed down’ on the vessels deck, in less than 5 minutes. It made us look very professional and it was not unusual to received compliments from persons watching us from the wharf. 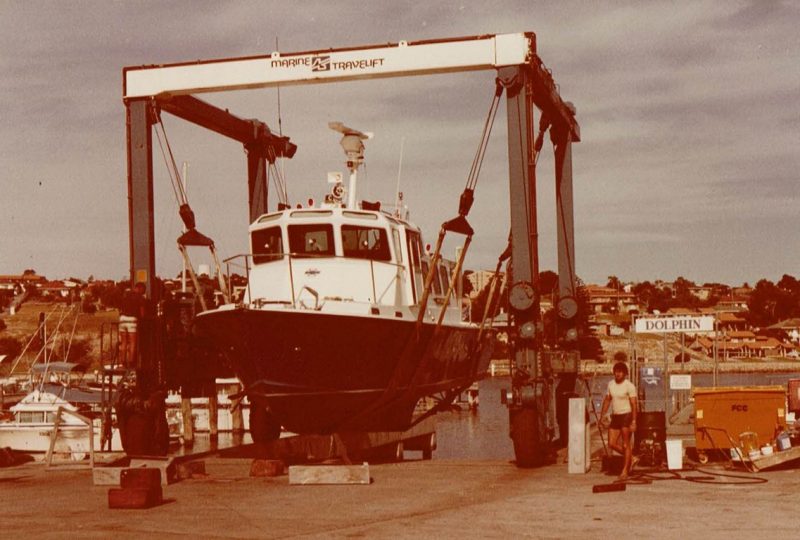 Once a year the vessel had to be lifted from the water for its annual inspection, annual survey, re-antifouling of the underside and any other general maintenance. As per the previously mentioned agreement, except for any ‘specialist’ type work we undertook all the maintenance ourselves. Sanding back the anti-foul paint, applying new anti-foul, polishing the hull above the water line, polishing the propellors, etc. It was hard, very dirty work, but we all chipped in to get the job done as quickly as possible. 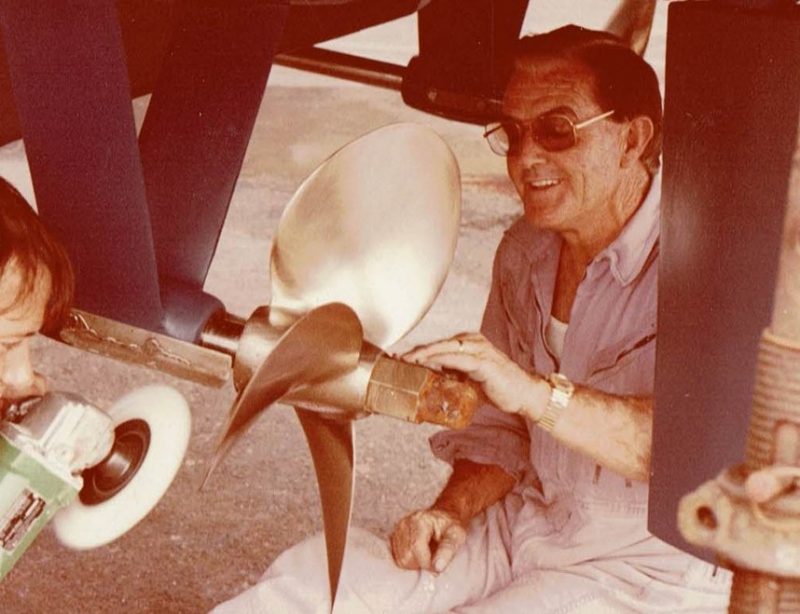 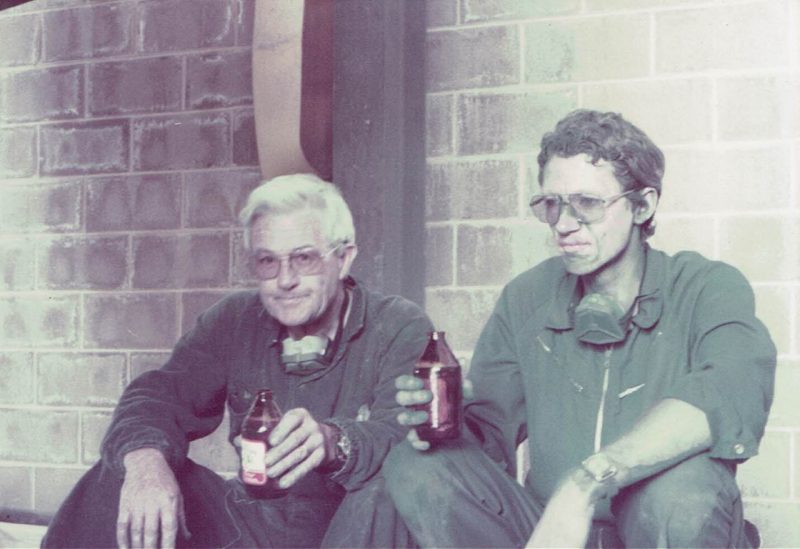 ‘Bomber’ and I enjoying a hard-earned beer…

On one of these occasions while waiting to be lifted out of the water, the Tami Lift (a special crane type vehicle to lift boats out of the water) was busy launching a new vessel in the water for the first time. There was nothing we could do until the new vessel had been launched, so I was up on the wharf leaning on the railing next to the proud owner of the new boat, watching proceedings. We struck up a general conversation.

After a while I said: “I bet our engine room is cleaner than yours”. I imagine his brain began working along the lines of, ‘…he must be joking, it’s a work boat, used every day, my boat is brand new and never been used…’. I continued: “Go on, I bet you a carton of beer our engine room is cleaner than yours”. I was pretty sure that his ‘new’ boat would have sawdust in the engine room bilge unlike our bilge which I knew was spotless because I had done the ‘pre-start checks’ that morning myself, not to mention ‘Bombers’ gleaming copper pipework. “Come on board and have a look,” I said, “then we can look at your engine room once your boat is in the water”. He said “OK, you’re on”.

So, stepping on board the ‘Edwin Abbott’, I led him through the wheelhouse to the hatch in the saloon floor that led down to the engine room. I leant down into the hatch, switched on the engine room lights and then instructed my ‘prey’ to climb down the ladder and have a look for himself. Once his head bobbed down below the wheelhouse floor, there was stunned silence for what seemed like several minutes. Finally, his head rose out from the hatch and he just said “Ok, you got me. What sort of beer would you like?” We never did get to check his engine room, but the beer was greatly appreciated at the end of our shift that day, and the crew enjoyed a most agreeable reward for a hard day’s work!

Moral of the story – ‘Keeping a vessel spotless and ready for action, may lead to unexpected rewards…’