2018 marks the 200th anniversary of ‘Frankenstein’ and the birth of science fiction. Celebrate this important date in modern writing and global pop culture with the performers of Genrefonix at one of WA’s most significant colonial landmarks. ‘Frankenstone’ is a live multimedia performance that will reanimate one of WA’s most historic sites and reveal little-known connections between the ‘panopticon’ style ex-prison and Mary Shelley’s gothic masterpiece.

Expect the unexpected, along with fresh Freo-Frankenstein film sequences, rocking live music, chilling soundscapes, true facts and reimagined fiction, and much over the top theatrics!

Pivotal historic bonds with Mary Shelley will be revealed, (Henry and Mary lived together as children following her mother’s death) and their dramatic consequences rendered bare against stark walls of limestone.

The Roundhouse, a 12-sided panopticon prison and WA’s first permanent structure, will once again stand alone. Bare and ominous; a gothic lightning rod atop an outcrop of solid misery, drawing true romantics to unspoken secrets within its walls and inviting the stout of heart to contemplate frightening truths lying in long-lost dungeons below.

In the show Roundhouse architect Henry Reveley (1788-1875) is cast as key protagonist in a gothic tale so wild that only WA’s most infamous building could contain in it. Henry’s lifelong bonds with Mary Shelley, both emotional and intellectual, are exposed through a theatrical retelling of the recorded facts, revealing a contorted sketch of a dark, talented genius – presented, tongue in cheek, as WA’s own Dr Frankenstein……

Henry not only brought the spirit of Shelley’s “novel of ideas” with him from Europe to the Swan River Colony, he co-owned it. He drank from the deep reservoir of radical thinking that Mary’s circle had created through her influential father, mother, husband, friends and acquaintances. He lived, loved and worked in their vortex, his soul trapped, his actions untempered. Like Mary he too was stalked by family secrets, death, sadness and financial worries. Henry escaped however, to establish a remote outpost down under where his program of public works could conceal his true passion for natural philosophy and investigations into animal electricity.

‘Frankenstone’ presents an engaging patchwork of influential thinkers and historical figures, morbidly stitched together to deliver compelling conclusions for the true heritage of Western Australia. WA’s Netflix generation will be thoroughly comforted in the knowledge that a real gothic touchstone lies hidden in plain sight in Fremantle’s West End.

The show begins in the relative serenity and abundant hospitality of the Old Custom’s House Atrium, at 8 Phillimore Street Fremantle, before the audience is led up to the imposing Roundhouse to witness its many secrets unleashed through music and film. At the show’s dramatic conclusion audiences can once again seek refuge in the Atrium and raise a glass to our fallen romantic heroes and villains.

The event is a fundraiser written and produced by Genrefonix in partnership with the Fremantle Volunteer Heritage Guides Association. All proceeds from ‘Frankenstone’ will go to the Fremantle Roundhouse to assist with developing special event resources to bring the venue to life once more.

Come and celebrate the amazing, forgotten heritage of WA’s most significant colonial landmark.

You can also join the Lynch Mob at the Fremantle Roundhouse!

If you want to get closer to the camera during the shoot wear black coat, old black dress, or old black suit and tie (see original film images attached to this event).

At 6.30pm you can witness a special musical performance by “The Creature” (Brendan Giambazi) and Dr Henry Reveley (Paul Rowe) from 6.30-7pm at Bitches Brew, and then head down to the Roundhouse lead by Cam McAzie a.k.a “The Bad Piper”. Upon arrival the mob will be guided through a couple of mob scenes including meeting Mayor Brad on the steps.

You can see all the details of the night here. 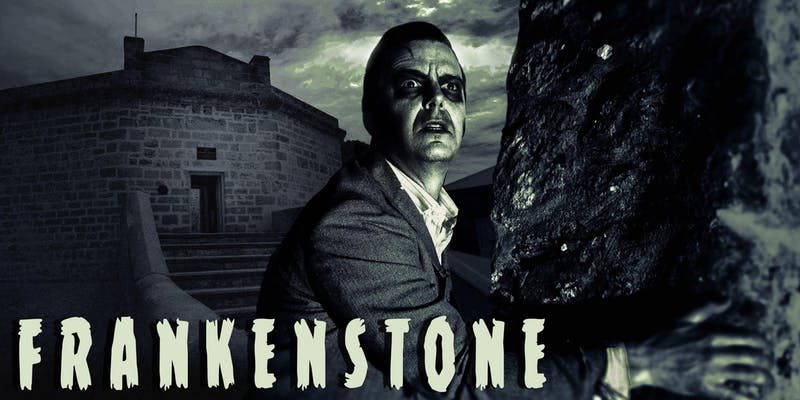