“She’d roll on a wet lawn,” I was told when assigned to duty on the 13-metre Fisheries patrol vessel, Dampier.

Built solid, in the old-school tradition from Australian hardwood by a government shipyard, Dampier should have been perfect for her intended duties. 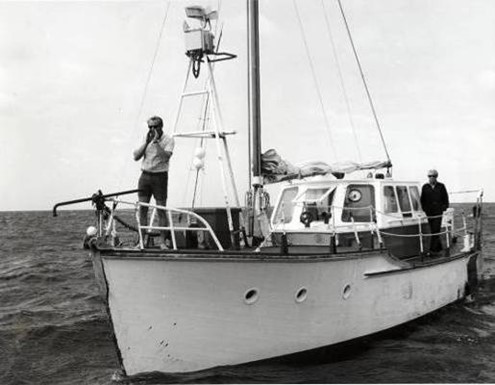 However, she was designed by bureaucracy. A former chief inspector – not a boat designer – had decided she should have more “free board,” that is, more height for the hull above the waterline, than she was initially designed for. This, of course, raised her centre of gravity and made her unstable.

Another bureaucrat “solved” the problem by adding a mast and staysail; the idea being that in rough weather the crew would hoist the sail and the wind would heel the boat over, so she wouldn’t roll as much. Great idea – unfortunately, this added a half-ton of rigging and spars that further destabilized the vessel.

No further “improvements” were made, and Dampier was then foisted onto a succession of quietly suffering crews.

Dampier was also under-powered, had no sound insulation to dull the deafening din from her single GM diesel engine, and had a strong smell of old wood boat, salt, verdigris, diesel oil and exhaust fumes in a heady mix. These aromas, combined with her wild rolling moments, were guaranteed to make even the strongest of stomachs heave. The most important rule on Dampier was that no one was permitted to vomit below decks – and while on deck, preferably not into the wind.

I served aboard Dampier for two and a half years in the early 70’s, during which time, travelling at eight knots (15 kilometres per hour), we sailed an average of 8,000 kilometres each year. She survived running aground, reversing into rocks, woodworm attacks, practical jokes by professional fishermen, and all sorts of severe weather on one of the world’s windiest (most roll-inducing) coastlines – the 10,000 kilometres of Australia’s western seaboard.

It was hot midsummer and my skipper, Ernie, and I were fishing with hand lines within the shadow of the Murchison Cliffs – an isolated, desolate, 120 metre-high tower of almost sheer rock stretching from the top of Dirk Hartog Island roughly 230 kilometres south towards Geraldton. These cliffs were the graveyard of many vessels including the 17th century Dutch treasure ship, Zuytdorp. There was little chance of survival if you had the great misfortune of crashing your vessel into them. 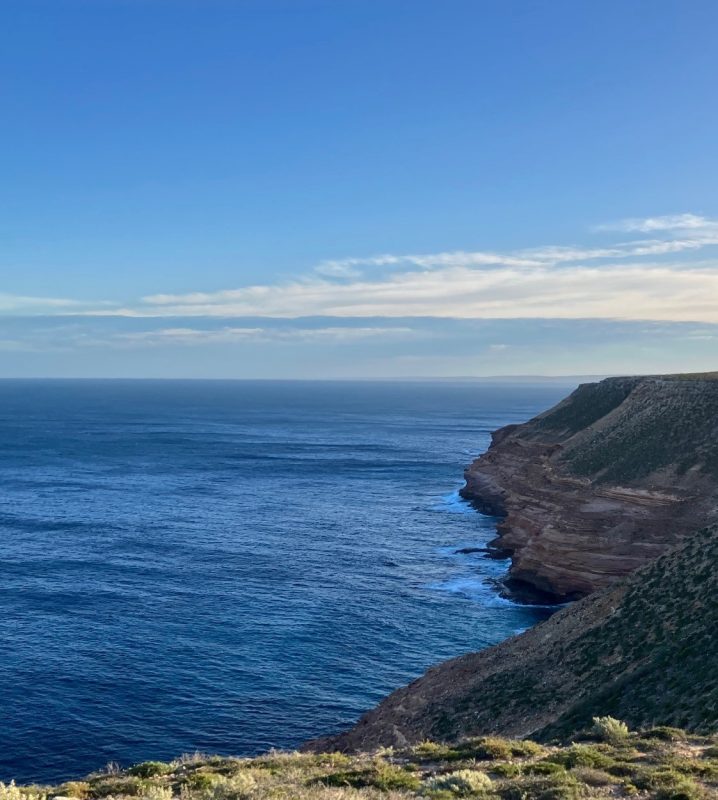 The ocean was flat calm, but the blue sky was giving over to billowing clouds rapidly approaching from the northwest. We knew there was a cyclone about 600 kilometres north of us. The ship’s radio was unreliable in this location and communications infrequent. The last we’d heard on the weather bulletin, two nights previously, was that the cyclone was travelling toward us at four kilometres per hour. Nothing to worry about! But that was 54 hours ago, and the gathering clouds now suggested otherwise. A wind line darkened the ocean at the horizon and advanced towards us.

“Let’s get out of here,” called Ernie. “Pull up your line.” I stowed the gear as the old diesel rumbled into life and spat cooling water and a black cloud of soot out of the boat-side exhaust outlet. He headed the boat due west, directly out to sea from the Cliffs. We needed as much distance between us and these jagged rocks as possible if we were to encounter heavy weather.

We hadn’t travelled a mile before it hit. There was no swell – just quickly escalating, short, sharp, steep, wind-whipped waves, which drove the bow high in the air until it was no longer supported. The hull slammed and shuddered down into the next oncoming wall of water, this time plowing the bow under it, so that a ton or more of ocean broke over the deck. On every fall from a wave crest, the ship’s propeller would momentarily be exposed to the air. The unloaded engine raced, and the prop thrashed and vibrated and shook the boat ‘til it sounded like it would destroy itself. The wind howled at us as it blew through the rigging, driving so much spray onto the wheelhouse that we could see virtually nothing other than cascading water.

An ominous heavy clanking sound from the bow alerted us that not all was well on deck.

“You’ll have to go check it out,” yelled Ernie over the scream of the wind and the engine roar. “I’ll hold her into the wind.” As was my custom, I wore only a pair of shorts. I zippered on my wet weather jacket and stepped out of the wheelhouse door.

It felt like a waterfall had hit me. A wave caught me and threw me back off my feet, sliding down the deck.

Ow!! Knuckles, toes, coccyx, knees, and an ankle crashed into the wheelhouse, deck, and guardrails. I hung onto the guardrail for dear life. Once that wave passed, I pulled myself to my feet and moved forward, bent double against the wind. My jacket filled with air like a parachute and then ripped in half down my back, flapping violently and stinging my skin. I pulled it off and let it go.

Two more waves hit me as I manoeuvred to the bow. I was more ready this time. Now my fear was to stay connected to the deck. The bow would alternately be thrust upward high in the air with so much force, it made my knees buckle. It then crashed downwards so forcefully, it left me suspended in the air. Each time I fell back painfully to the deck – far worse than any bucking bronco.

I saw the problem. The 30 kilogram admiralty anchor, which is normally lashed to the bow rail, had come loose and was flying and diving off and onto the boat, as I was. Attached to it was the end of the heavy half-inch anchor chain, also smashing onto the deck. I had to somehow grab the bow rail, hold on, grab the anchor, and lash it back in place, all the while trying not to lose fingers or get knocked overboard.

It was one of those moments in life where time stops, and focus becomes intense. I grabbed the lashing rope and threw a turn around the anchor and bow rail just as they were meeting in their wild passing of each other. A wave pushed me backward, which meant I fell, holding the lashing, which, in turn, pulled tight on the anchor at just the right moment.

I was suddenly being stung all over my head, neck, and body – it felt like sharp stones. In fact it had started raining, although this was unlike any rain I had ever experienced. It was so heavy and so forceful, I couldn’t see the wheelhouse just five metres away. I used the momentum of the heaving deck to propel me back to shelter. As I moved, I saw strips and sheets of paint being ripped off the radar mast and superstructure. Once inside the wheelhouse again I saw that my skin was red raw. It stung from the salt. I looked as if I had a very bad case of sunburn.

We battled this storm for six hours. Although the engine was at full throttle, we were barely making headway against the waves. With each shuddering crash, I thought any time now the boat would split in two and founder. We would have no chance of survival. The radar was not seeing past the rain, so we had no idea where we were – back under the cliffs, for all we knew.

After about five hours, there was a small break in the rain – for about two minutes – and there, right in front of us, was a breaking reef. Another five minutes on this course and we would have been swept onto it.

This discovery was miraculous in two ways. First, we didn’t get wrecked. And second, we knew from the navigation charts there was only one reef like this within range of our starting position that morning. 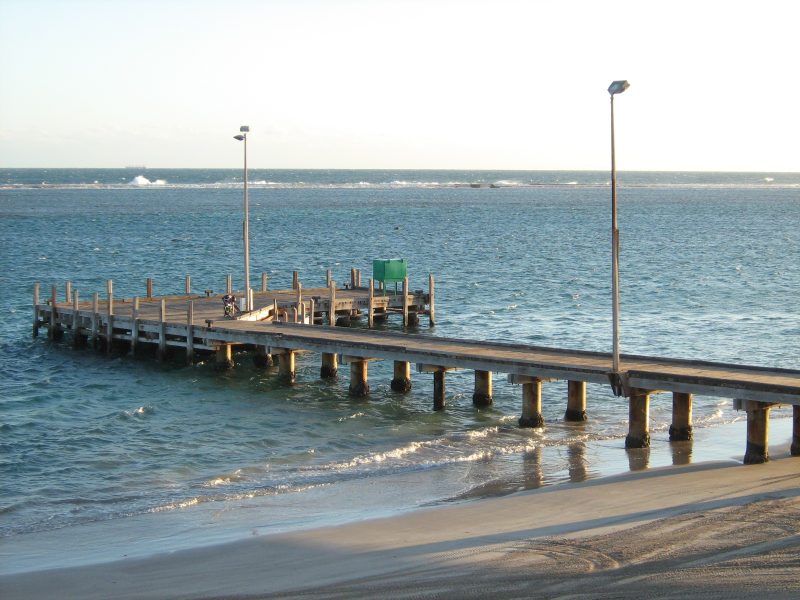 This reef was not far from Port Gregory, a small, remote, safe anchorage used historically by the early convict salt miners. We knew where we were and changed course toward safe haven.

The rain enveloped us once more. Now we were almost on a beam reach – the waves were hitting us from the side. Dampier rolled like she had never rolled before. Every item in the galley was thrown out of its place. The stove blew to pieces; the built-in fridge broke out of its anchoring points. At times, the vessel rolled over so far the waves were washing along the wheelhouse windows.

We needed more miracles. Don’t let the boat roll over. Keep the engine going, and please let the rain stop when we reach the entrance channel. We must have visibility to find our way in.

We got our three miracles. The wind had subsided a little, to about 70 knots, and the rain came and went in squalls. Once inside the protecting outer reef, Ernie kept the boat headed into the wind. There wasn’t a lot of room, and we could easily have been blown ashore.

The half-ton of anchor chain stored in the bow locker had been thrown over and over itself until it was completely tangled. Now 9:30 at night and dark, it was my job to haul it up from below decks, untangle it, and lay it out uniformly on deck, so we could safely drop anchor. That particularly draining task took another full hour.

We eventually secured the vessel. I was totally exhausted and for a while wanted nothing to do with boats ever again. The Geraldton District Inspector told us later that he had feared we were lost. The cyclone was recorded as having wind speeds in excess of 90 knots. Only two other, much larger boats had been out in the weather, and they had both gone aground.

After a maintenance refit, Dampier went on to patrol the coastline for many more years, and so did I.