On a crisp and sunny morning we sashayed out of the neighbourhood, heading north for what we assumed would be a brief visit to the western suburbs.

Traffic lights were as kind as the weather as we skirted Fremantle via the railway station and port before easing our way across the old traffic bridge, past workmen and women sporting fluoro vests and bored expressions. Reduced to two single lanes, the bridge felt as compromised as some of the debates around its future.

But our musings had more to do with personal choice than community problem-solving. After months of weighing up the pros and cons, we had elected to get jabbed. Our procrastination, more kindly described as ‘hesitancy’, had nothing to do with vaccine aversion – but everything to do with which vaccine would be preferable, given that I had faced an autoimmune challenge not long before Covid struck. Happily, bodily recovery was more or less complete. But medical opinion lacked clarity around the timing and desirability of any form of vaccination. Now, my own risk assessment indicated it made little sense to delay. The Delta variant has been a game-changer. No longer can those of us who live in semi-protected bubbles pretend we are immune from an outbreak.

And it seems perfectly clear that vaccination is the only decent game in town, no matter that some souls use all kinds of convoluted thinking to argue otherwise.

In any event, we reasoned it was high time for us to take the plunge. My GP was booked until well into September so we opted for the public forum. Claremont Showgrounds evoked memories of fairy floss, horse dung, and sideshow alley; hordes of people, lost kids, farm animals and machinery displays. But those ghosts of yesteryear were not apparent as we passed through the entrance gates and were directed towards a car park already overflowing. ‘We are not the only ones,’ I observed, somewhat unnecessarily.

Talk about naïveté. You have confirmed appointments for 9.25 and 9.30, said the text messages. Great, we thought. We won’t be long out of here. Yet that assumption began to crumble once we saw the lines outside the pavilion door. And it vanished completely into the ether when we entered and observed the mob already seated. In fact, two mobs – the predominantly younger cohort sporting red stickers, awaiting their Pfizer shots, and those of us, yellow-stickered and somewhat more senior, destined for AstraZeneca. 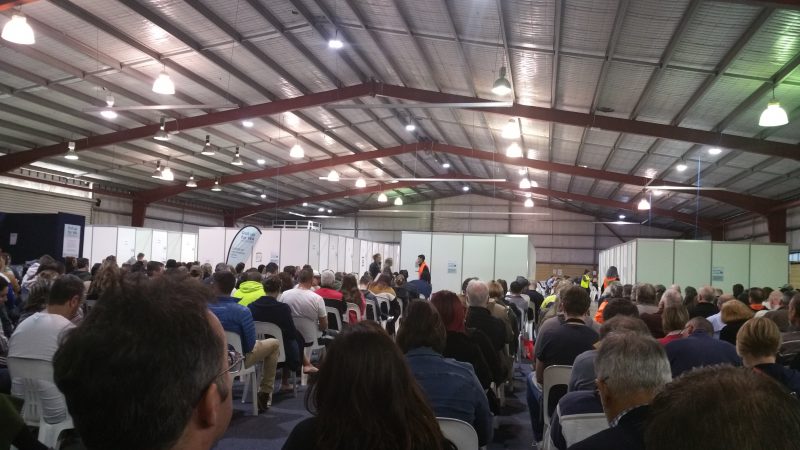 We were soon seated before computer monitors where efficient operators inspected our identity documents and interrogated us on our medical histories. Having established ourselves as fit and proper persons for the needle, we joined those already settled on plastic chairs, arranged neatly in rows of ten. At a rough count there were about 150 people in front of us.

‘Doesn’t look promising,’ I muttered. We had been sitting just shy of a quarter of an hour. Nobody had moved. By contrast, in the Pfizer section, there had been frenetic activity. Every three or four minutes, following a command from an youthful official at the front, people stood up and stepped forward, each row taking the seats of the row ahead. Bizarrely, it resembled a version of the Mexican Wave; an eager flourish confined to one half of the pavilion. The younger set was on the move while we oldies were left to cool our heels and meditate on the nature of patience.

’14 minutes.’ The chap alongside me frowned as he looked at his watch. ‘At this rate we’ll be having a late lunch.’

Now that was not a situation we could welcome. Our tentative plan had been to get the jab, caffeinate at a local establishment, and take a leisurely stroll around Lake Claremont. Camping on hard plastic for three or more hours would guarantee a mood swing. Neither of us had thought to bring a book. And I watched with dismay as the battery died on my phone, precluding any deviation into online distractions.

‘12 minutes.’ My fellow sufferer sounded mildly optimistic. He was no longer frowning. If this was a trend, our waiting time was heading south. Meanwhile, those about to be Pfizer-ed cascaded towards the cubicles, like gleeful lemmings. By comparison, our Mexican wave was becalmed on an elderly ocean.

Nature called. I circumnavigated the pavilion, now jam-packed with hundreds of customers, either fixated upon small screens or wearing expressions ranging from stoic to incipient agitation. The wall in the Gents was already decorated with red and yellow stickers, donated I imagined by punctured punters making their escape. I also made my escape, albeit temporary. Negotiating the car park, I meandered down the embankment and gazed across the oval, the vast expanse of lawn as silent and mournful as the MCG during a Victorian lockdown. 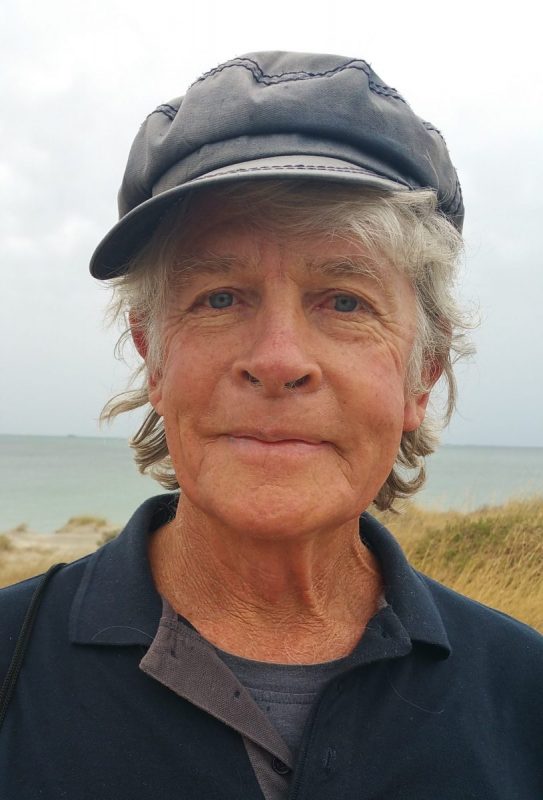 At least it was sunny. After locating our car, I grabbed a water bottle and headed back to the torture chamber. Near the entrance, the queue stretched back for thirty or forty metres. The flow of vehicles continued, carefully channelled by a bevy of patient attendants. Pointing to my yellow sticker, I slipped past the major-domo on the door without further inspection.

We did not seem to be any closer to the front. But things were looking up. ‘5 minutes’, announced my new friend next to me. He had already telephoned his wife, telling her not to wait. Behind us, a woman was also on the phone. ‘She’s been at it for half an hour,’ said my dear one. ‘I know her life story.’ Sadly, the ubiquity of portable phones has brought us in close contact with the life stories of many, whether we want to listen or not. ‘Silence is golden’ seems to be as obsolete and undervalued as a five-day Test match.

But – joy of joys – the interval was really coming down. We could see the soon-to-be-jabbed entering and exiting the cubicles ahead. The Pfizer folk still bobbed up and down with alacrity but AstraZeneca had found a rhythm. We might be done and dusted within a couple of hours, not half a day.

And so it proved. By eleven-thirty, only a smiling cheerleader separated us from a nurse with a needle.

The Great Influenza. Back in 2004, John M Barry published this marvellous account of the so-called Spanish flu. His book contains a summary of the history of Western medicine and key protagonists. It’s a story of courage and commitment, of pride and folly, tragedy and triumph, and of the immense saving of human lives brought about by vaccines and other medical interventions. I thought about Barry’s work as I waited. I thought about it in the context of those who oppose vaccination and others who believe that Western approaches have done more harm than good. Covid has had multiple impacts but one of the most pernicious is the confusion around vaccination. ​These days, many folk are either completely flummoxed or self-appointed experts. Disagreement is rife and, by and large, rational discussion has gone out the window. We live in an age of over-information, where sorting the wheat from the chaff is nigh on impossible unless you are prepared to look beyond strident opinions on social media and come to grips with the historical context and the actual results of human endeavour to preserve and prolong the life of our bodies. Barry’s book – over 500 pages – will probably not find its way onto many bedside tables but that is more the pity. If I had to beat any drum, it would be to encourage people to appreciate and understand the past and its implications for our present. Otherwise, we operate in a partial vacuum where ‘influencers’ of every description, with public profiles and partially-baked ideas, are given far too much credibility.

These thoughts may have evaporated by the time I sat before Nurse F. She welcomed us into her cubicle and said she had been seconded from her job with a school. It was her first day in the vaccine hub. To our surprise it was not a quick in and out. Again, we were asked specific questions about our medical history and around consent. When I revealed my past autoimmune condition, Nurse F immediately acknowledged it was outside her expertise and called in a supervisor. I was impressed and reassured with the care and attention. Disarmed in more ways than one, I accepted the invitation to roll up my sleeve.

After the jab – more of a pinprick – we were asked to wait at least fifteen minutes before leaving the pavilion. I struck up a conversation with a young man who seemed to be keeping an eye on things. Yes, he said, some people do have reactions but there were facilities and medicos in place for immediate treatment. Most adverse responses, however, were caused by anxiety, not precipitated by more serious physical triggers. Not many of us like the idea of being stabbed with a needle, no matter how gently. And the blazing publicity around possible side effects has undoubtedly added to nervous malaise. The psychological repercussions around a single death from blood clotting can outweigh sober statistics that emphasise the extreme rarity of such an outcome. Fear, it seems, will trump statistics in these circumstances. According to my young man, some people get anxious to the point of collapse, even after the event. On a table at the front of the recuperation area, small cartons of apple and orange juice were on offer, not simply for show but for rehydration and a sugar hit. A nice touch, I thought.
When we left the building, the queues were even longer. It transpired we were booked in on the first day of the Blitz. With the rate of Western Australian vaccination lagging behind the rest of the country, our Government wanted to be seen as proactive. What better way than to announce a ‘Blitz’, a great word for Scrabble but a lazy term for any activity that requires some measure of concentrated effort. Londoners, who had known something of a real Blitz, would be rolling their eyes.

The last traces of these pontifications drifted away as we followed multiple Exit signs leading out of the Showgrounds. Perth’s winter, as can happen, suddenly made way for a taste of early summer. Shedding one or two layers, we meandered around the lake, content to have been pricked and patched. A pair of black swans took to the air, offering a reminder of grace and beauty, even in the times of plague.

* Based in Fremantle, Bruce Menzies is the author of three novels, a family history, and a recent memoir. Details at ‪BruceJamesMenzies.com