Each week we’ll feature an artist included in the Help the Homeless Art Auction.

Based in Bathurst Island, Northern Territory, Tiwi Design Aboriginal Corporation is one of the oldest and most artistically diverse art centres in Australia. The art centre produces ochre paintings on canvas and bark, ironwood carvings, screen printed fabrics, ceramics, bronze and glass sculptures as well as limited edition prints. The aim of the corporation is to promote, preserve and enrich Tiwi culture.

Jean Baptiste Apuatimi was born at Pirlangimpi (Garden Point) on Melville Island in 1940. She was just 14 years of age, and living at the convent in Nguiu (Wurrumiyanga) on Bathurst Island, when she married her late husband, Declan Apuatimi. Declan was a renowned dancer, singer and the pre-eminent Tiwi artist of his time. During their life together they raised fourteen children and, as she watched him create poles for important ceremonies, he taught her how to mix ochres and paint.

Her first works of art were included in group shows from 1991 onward, though it was not until 1997 that she became a full time artist for the Tiwi Design Aboriginal Corporation. Over time she became an expert in various media, including printmaking.

Jean’s paintings conformed with the twin conventions of Tiwi art – moving between the figurative depiction of ceremonial objects, and body painting designs (Jilamara). Her Jilamara designs were of particular importance in her work and were both innovative and striking. Jilamara is unique to Tiwi art and culture. It typically, consists of minga and pwanga, lines and dots, which sit within other geometric shapes such as squares and triangles.

Until her death in March 2013, Jean Baptiste Apuatimi worked at Tiwi Design art centre, surrounded by younger artists who included her daughter Maria Josette Orsto and relatives Ita Tipungwuti, Margaret Renee Kerinauia and Roslyn Ortso. Sitting with Jean, these young women learnt the importance of originality, and the expression of personality within their designs.

During her lifetime she had more than a dozen solo shows, and was represented in major private and public collections around the world. They included the Kluge-Ruhe Collection and National Museum of Women in the Arts in the USA. In 2007 she was selected to participate in the inaugural National Indigenous Art Triennial: Culture Warriors at the National Gallery of Australia, and in 2009, she exhibited to great acclaim at Rebecca Hossack Gallery, in London. Her works are also in the collection of the National Gallery of Victoria.

With recent sales ranging from $8000 to $9000 for works of a similar size, the lower price range in the Auction is considered a bargain.

You can read more about the night here. 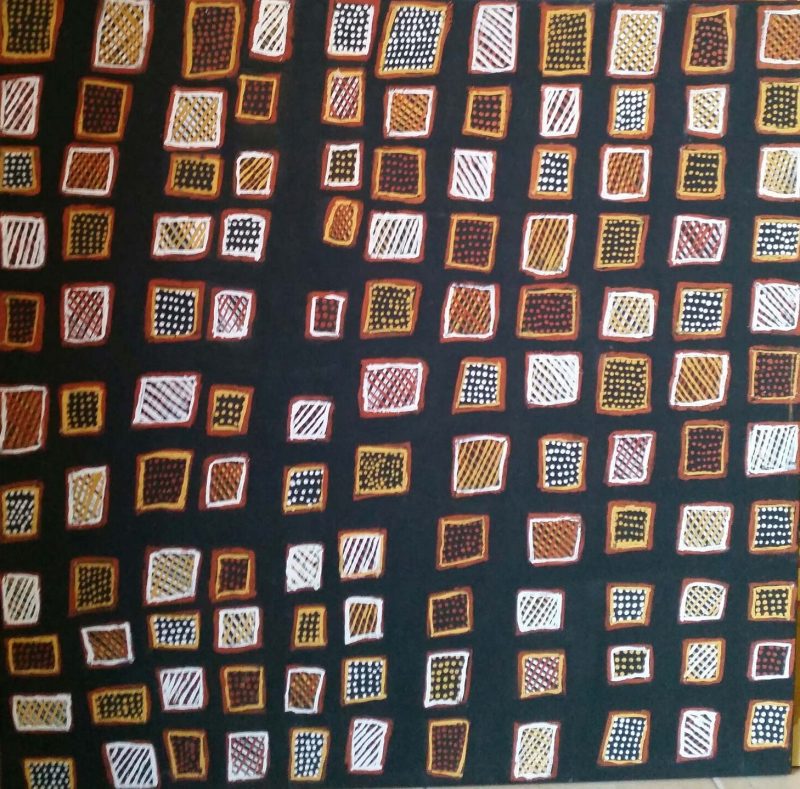