The Trees Of Fremantle – The Norfolk Pines Of The Esplanade

The Shipping News is pleased to bring you regular stories about the trees you find in and around Freo.

If you’d like to hit us with ideas for future stories, just email Phil on our * contact page

It is always a pleasure to wander amongst or, better still, lay beneath the majestic Norfolk Pines of Fremantle’s beautiful Esplanade Park. 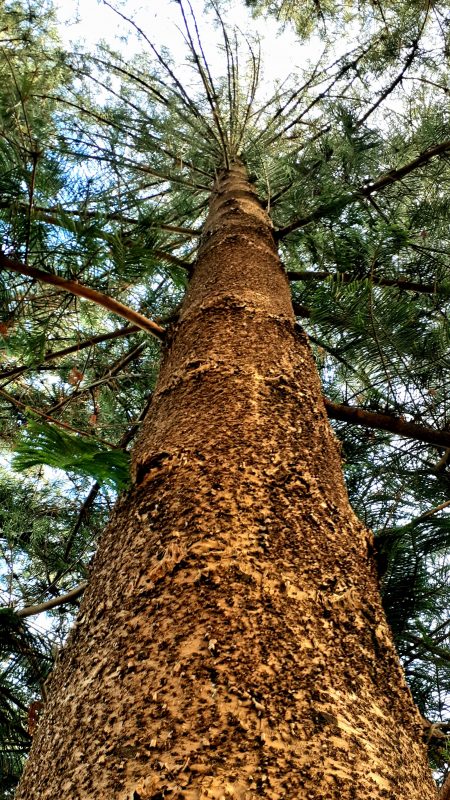 The Pines seem to have been there forever.

I imagine many Freo locals have fond memories of spending time in the Esplanade amongst the trees – as kids eating fish and chips from Cicerello’s on the grass with Mum and Dad, at May Day rallies, during One Day events, and at all-day and all-night Blues & Roots concerts, to mention but a few!

Of the genus Araucaria, Britannica states –

Araucaria, genus of 20 species of pinelike coniferous plants in the family Araucariaceae. They are found in Brazil, Chile, Argentina, New Guinea, New Caledonia, Norfolk Island, and Australia. The name of the genus is derived from Arauco, the name of a district in southern Chile where the trees were first discovered. Several species are cultivated as ornamentals and as timber trees, and a number are listed as endangered species in the IUCN Red List of Threatened Species.

Staying though with the majestic Norfolk Pines that we find in the Esplanade, is the Norfolk native, or endemic, to Western Australia, and more particularly Fremantle? Presumably not, given its name. Just what is the story with this species of ‘pine’ which seem to proliferate around Freo, as well as up and down the coast? And how did these Norfolks come to turn up in the Esplanade?

Well, Araucaria heterophylla – the Norfolk Pine – is a vascular plant in the ancient and now disjointly distributed conifer family Araucariaceae. Strictly speaking then, it’s not a true pine, but a conifer.

As the tree’s vernacular name, Norfolk Island Pine, implies, the tree is indeed endemic to Norfolk Island, a small island in the Pacific Ocean between New Zealand and New Caledonia, about 1,440 kilometres east of Sydney.

And just in case you were wondering, yes, the first European believed to have sighted Norfolk Island was Captain James Cook (or perhaps the little guy at the top of the main mast who then called out to Cook to have a gander at the Island through his eyeglass!).

In 1774, on his second voyage to the South Pacific in HMS Resolution, Cook noted the presence of large forests of tall, straight trees that appeared to be suitable for use as masts and yards for sailing ships.

However, when the Island was later occupied in 1788 by convicts transported from Britain, immediately following the settlement of Sydney by Captain Arthur Philip in that year, it was found that Norfolk Pines were not resilient enough for those particular uses and the industry was abandoned.

In good conditions, though, Norfolk Pines will live for 100 plus years and attain heights of over 60 metres, with canopy spread over 15 metres. So they are not entirely lacking in resilience! And they seem to convey some strange sense of well-being to us humans, quite apart from doing well in sandy coastal locations!

For just those reasons, it seems, the Norfolk Pines in the Esplanade finished up being planted there as botanically appropriate in the foreshore conditions and nicely ornamental for a park. 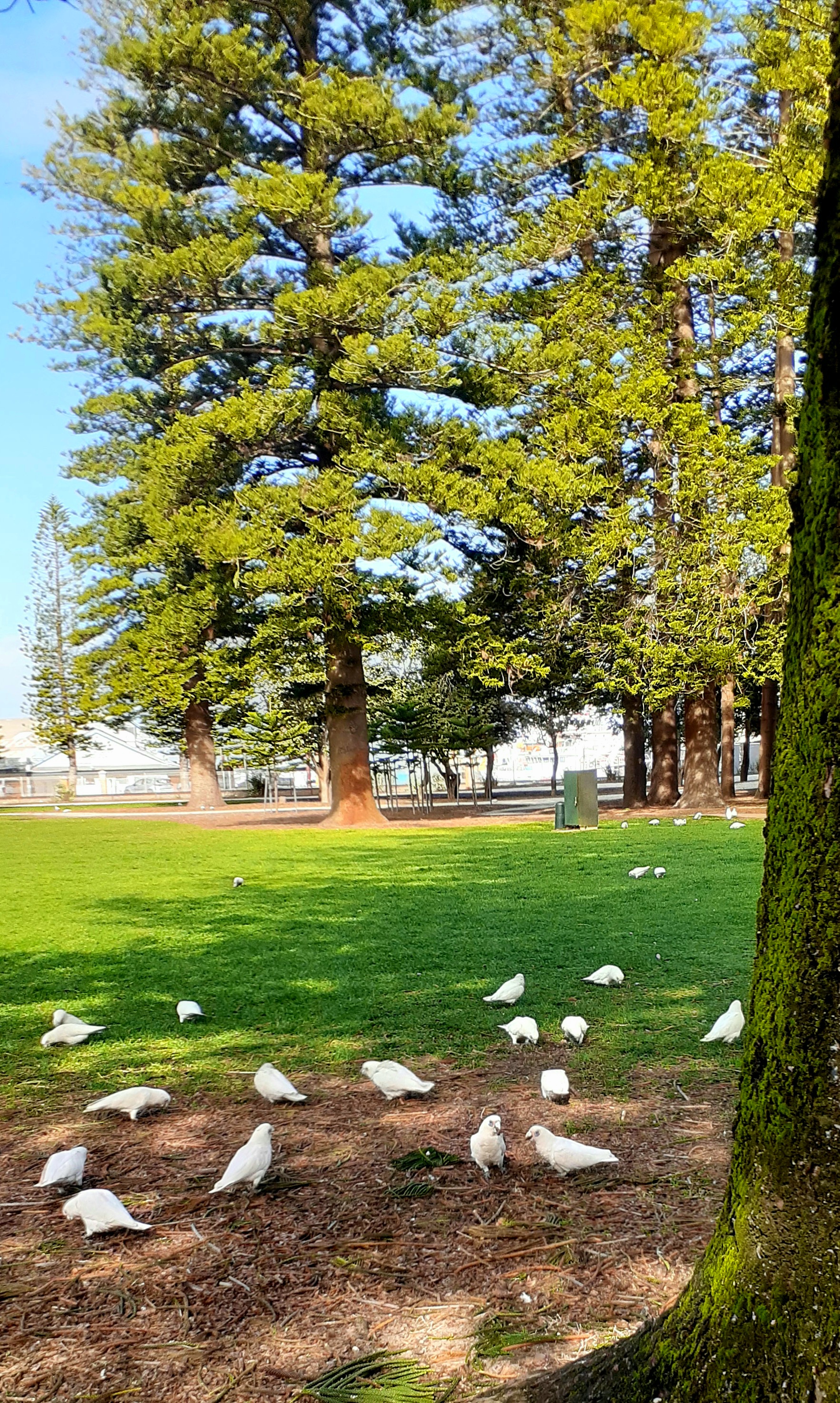 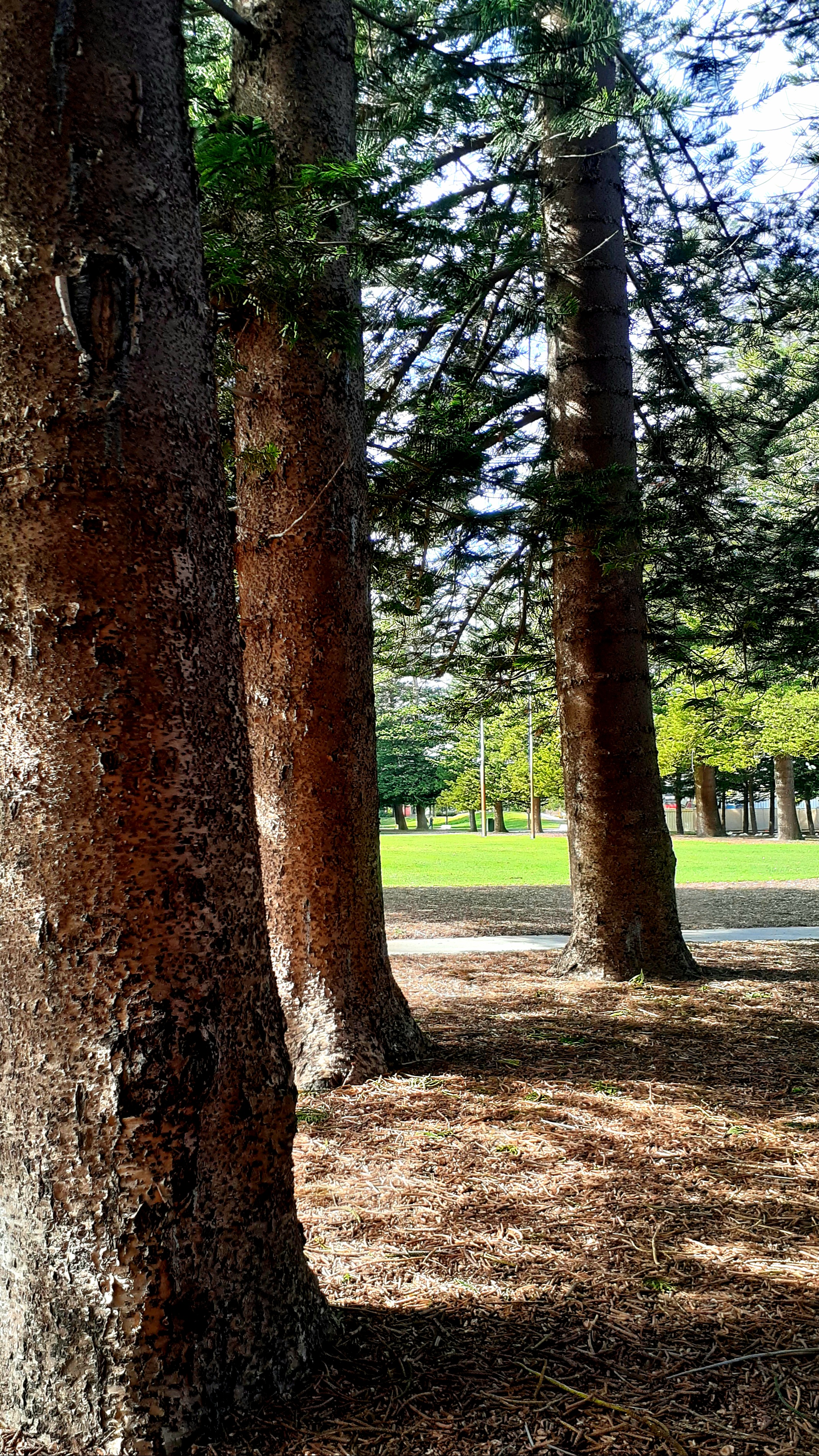 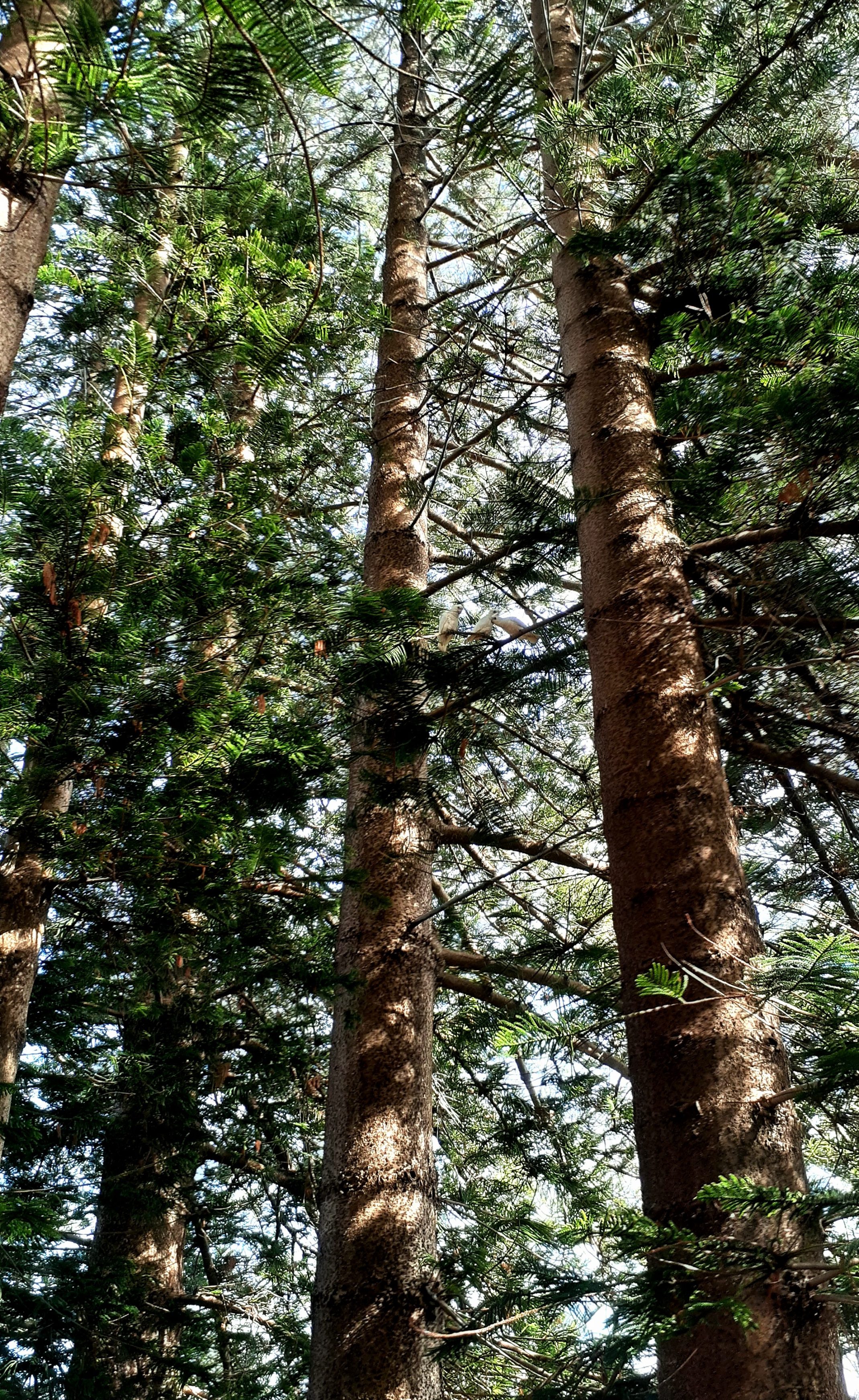 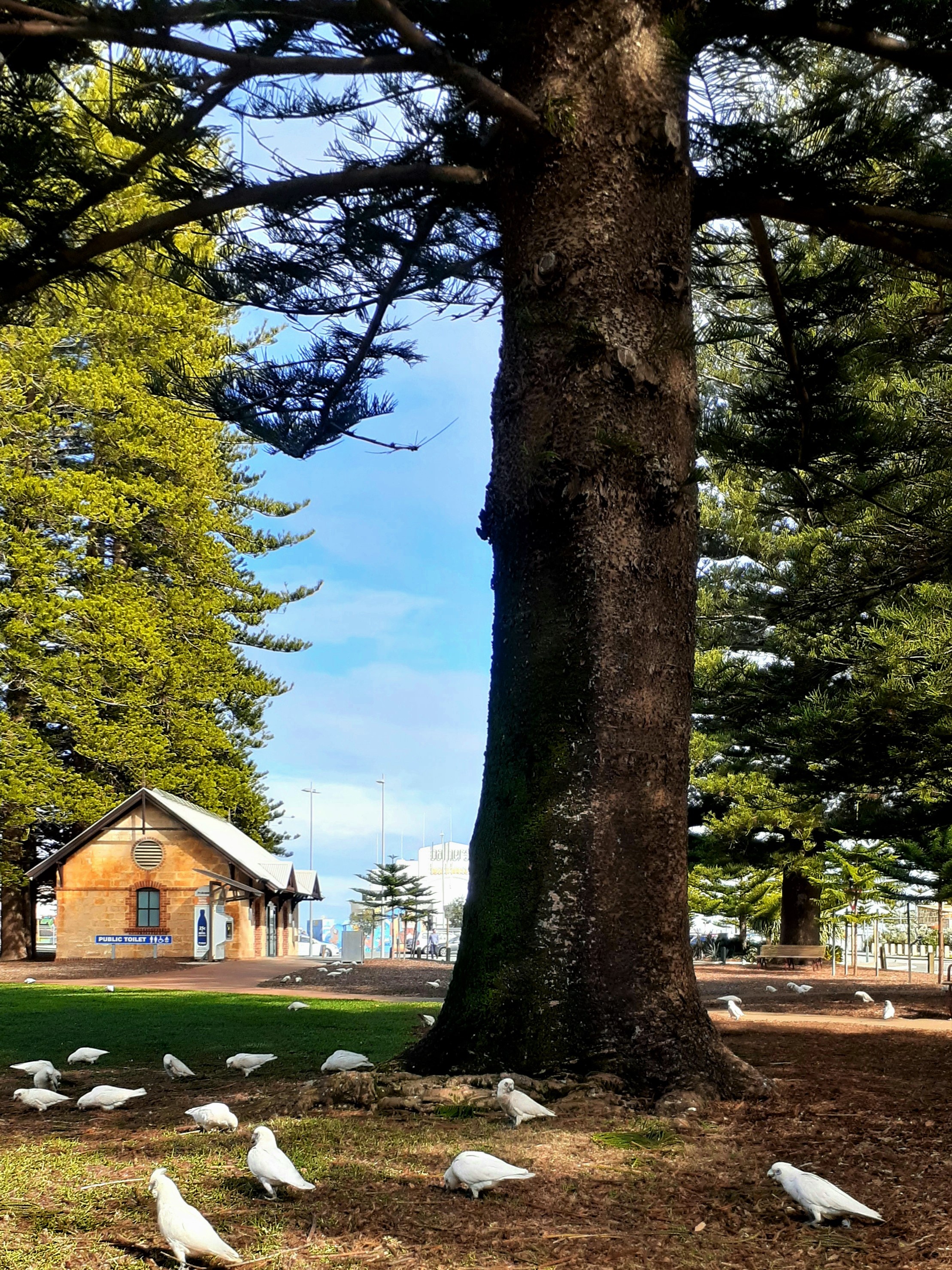 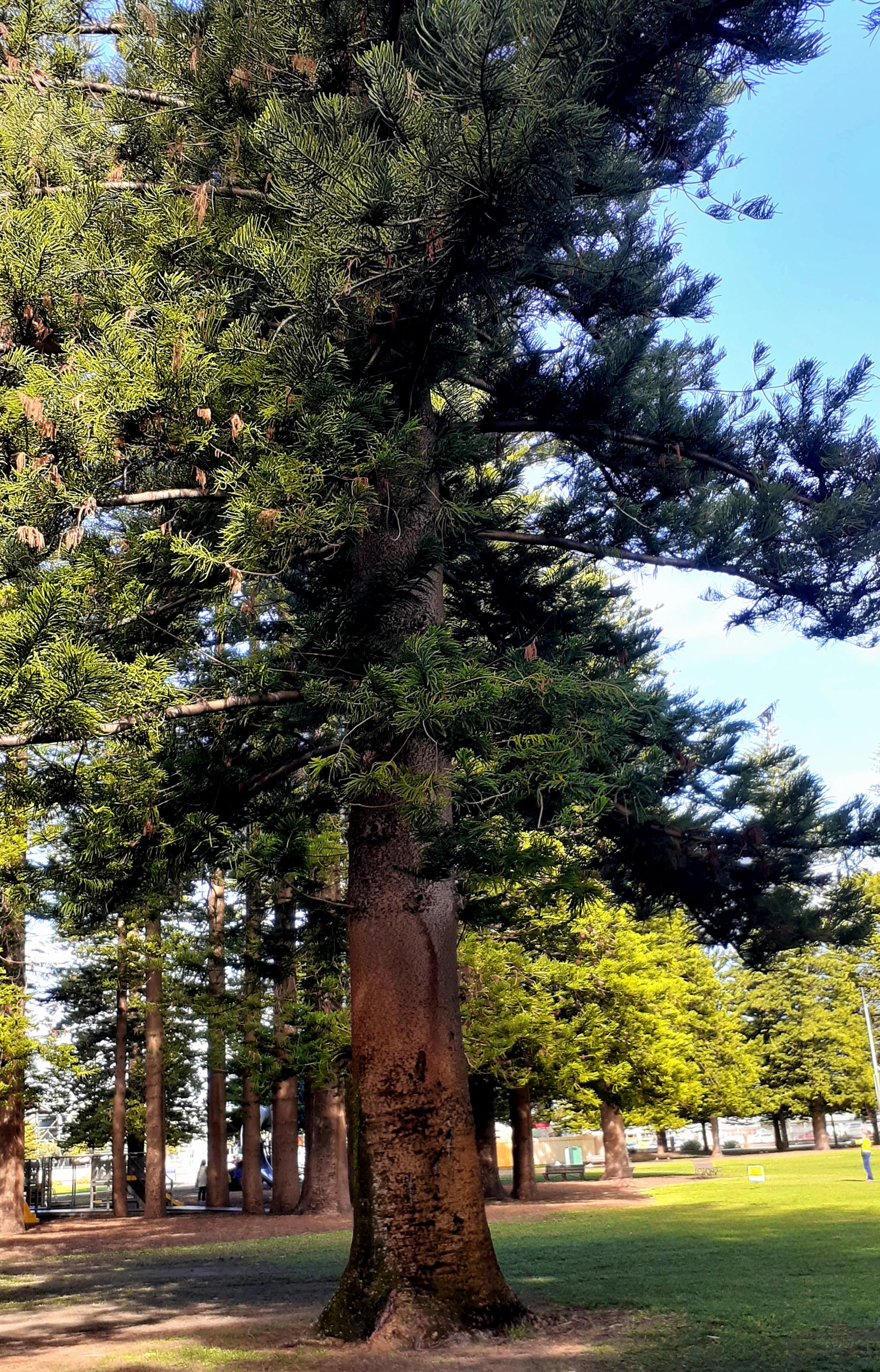 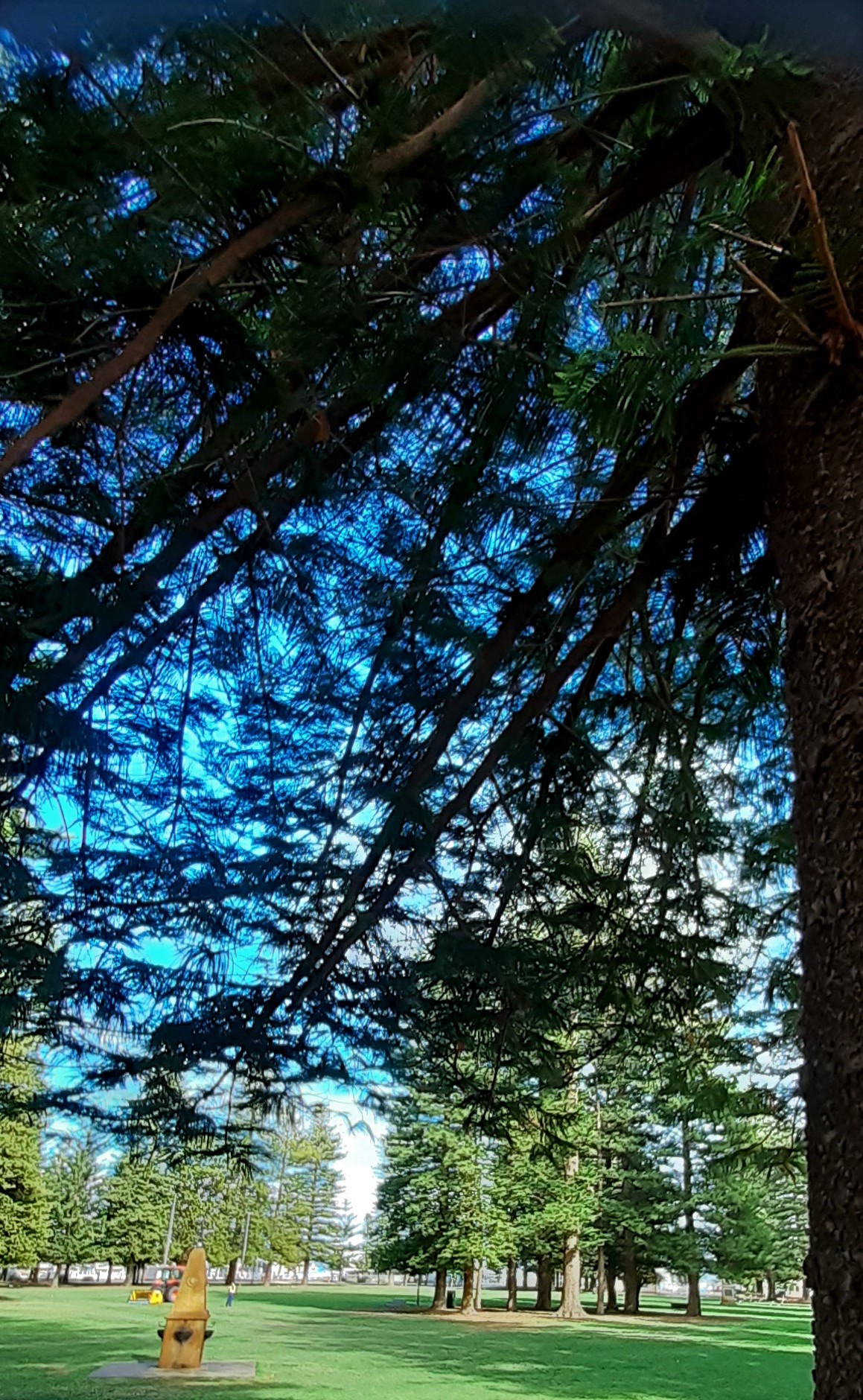 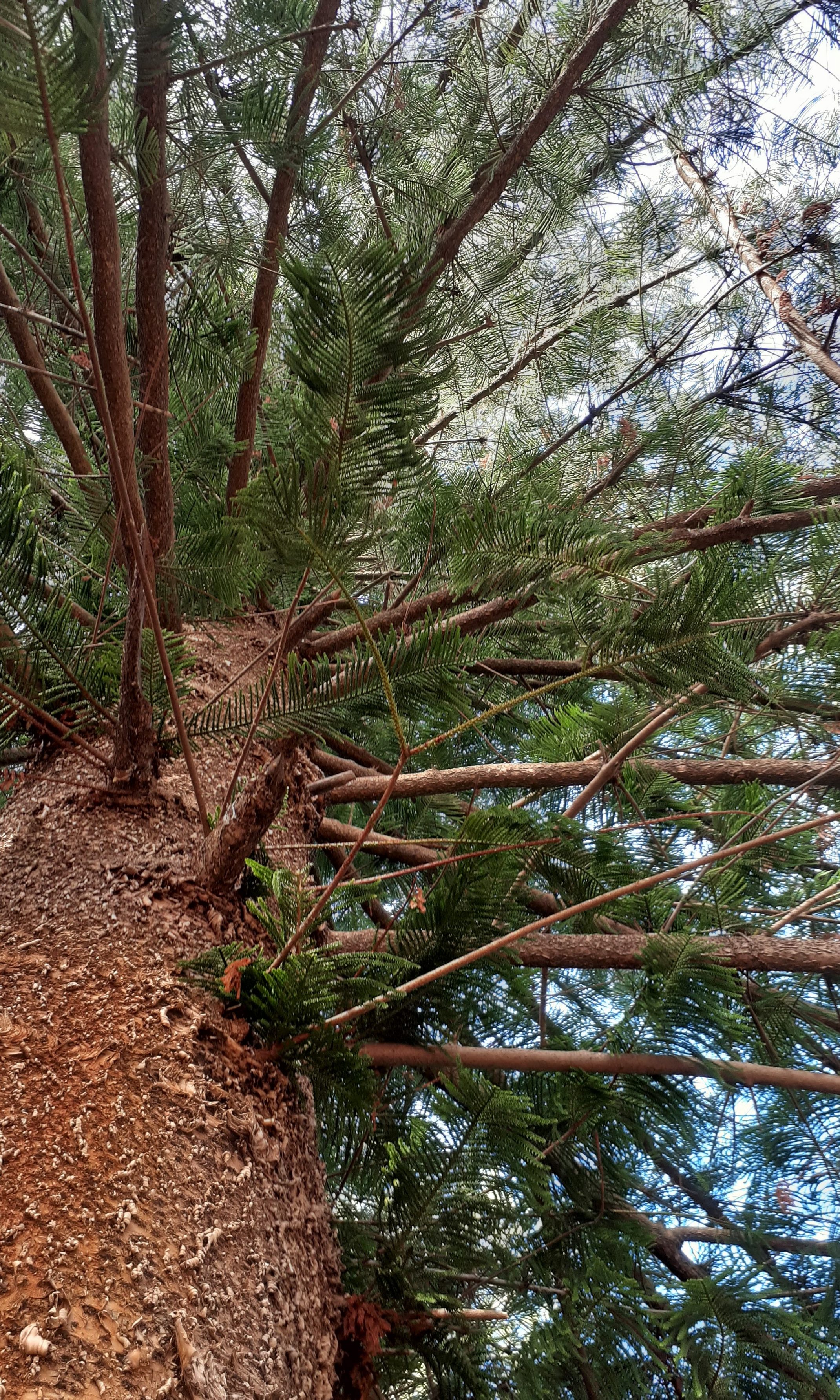 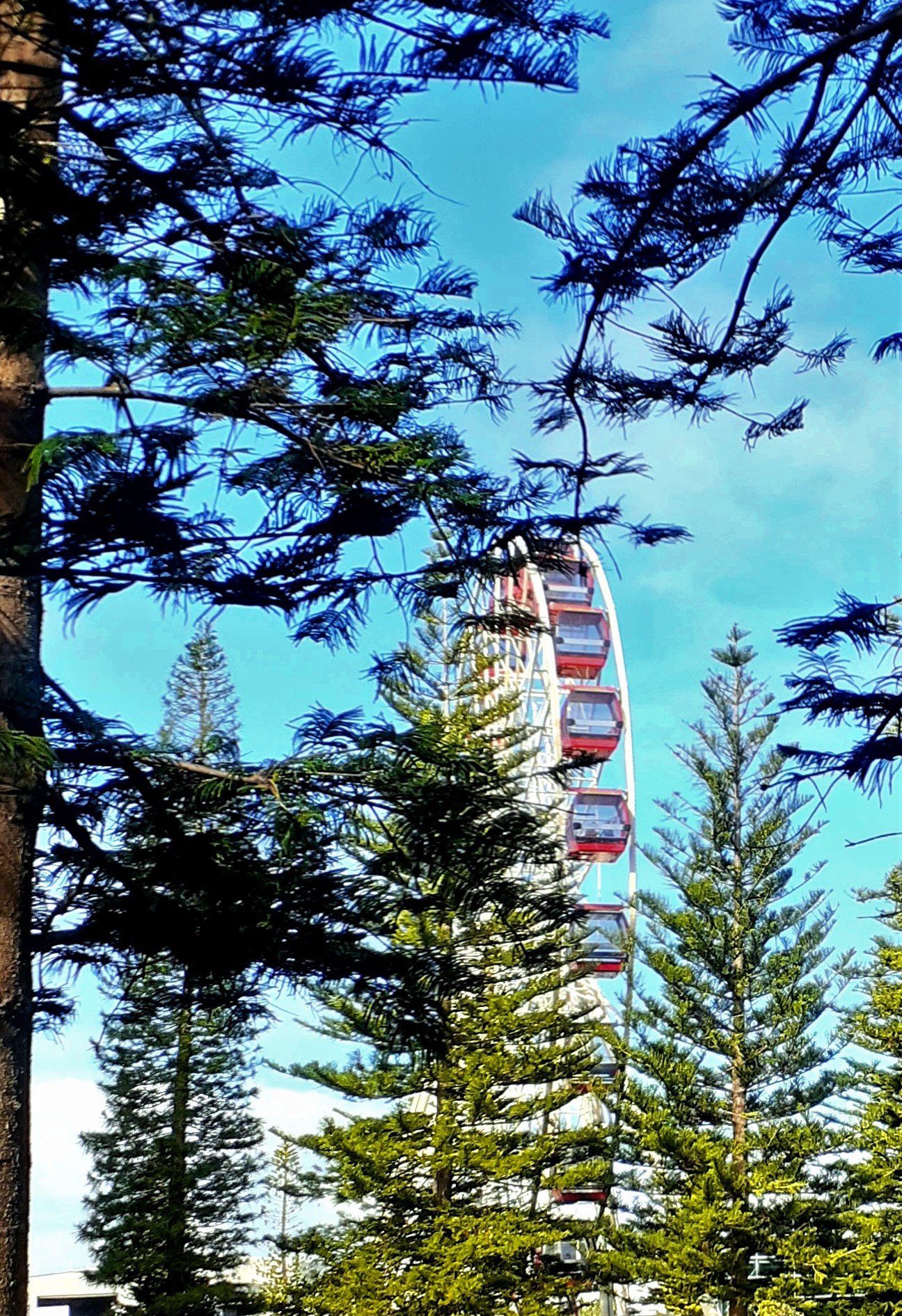 As it happens, the Fremantle Esplanade now has a couple dozen or more mature Norfolk Pines. And they are mentioned in the citation of the Esplanade Reserve on the Western Australian Heritage Register, as well as on the Significant Trees List of the National Trust.

Esplanade Reserve and Norfolk Island Pine trees has aesthetic significance for its contribution to the streetscape, its landmark qualities and it contribution to the central Frementle area. It has historic significance as an example of the efforts of the Fremantle Council and the Public Works Department in countering sand drift and erosion from the sea, and in providing areas of public open space. The Reserve has social value, having been a popular venue for community events, celebrations and activities since the early twentieth century.

The citation goes on to explain the drawn out process by which the land area today covered by the Esplanade came to be created in the early years of the 20th century, following reclamation of the waterfront in that area. Once it was part of the ocean, with the high water mark around where Marine Terrace runs today.

All of this, and the planting of the Norfolk Pines in the Esplanade, happened at the instigation of the influential, City of Fremantle Councillor, Frank Nicholas, concluding in around 1908.

Advice on the tree planting was provided by the Forests Department, Fremantle Horticultural Society, the Department of Agriculture and the Director of Government Gardens – none, apparently, lovers of the majestic, and endemic, nearby Tuart tree! One assumes they all considered the Tuarts/‘White gums’ wouldn’t control sand drift in the reclaimed area. Surely they wouldn’t have otherwise considered them less worthy. After all, a Tuart is a beautiful tree. Just look at this one! 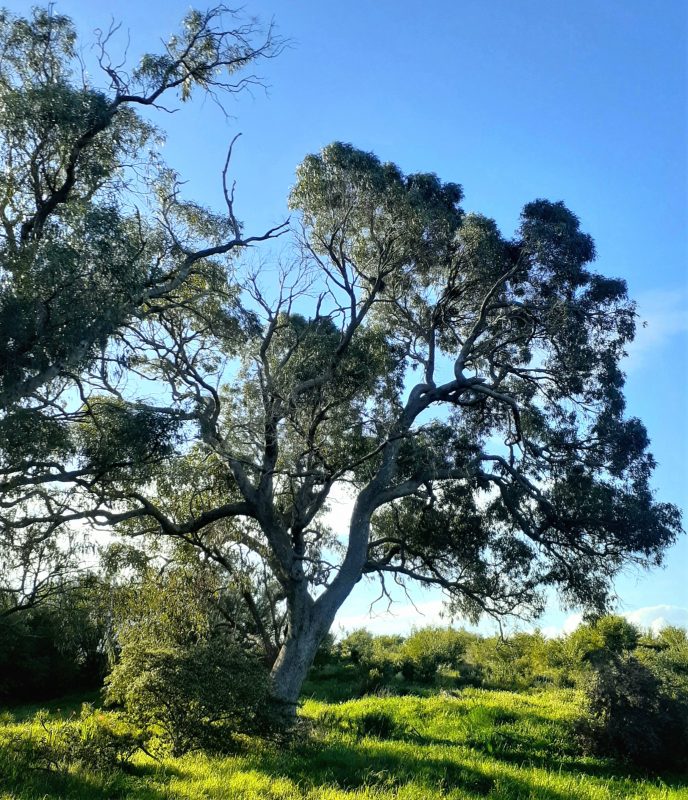 As just noted, Mr Nicholas was an influential man around Freo at the turn of the 20th century. His obituary, following his death in 1924, observed –

He was best known to the commercial fraternity as the secretary of the W.A. Shipping Association, which position he held for about twenty-five years. An energetic worker for the progress of the district he took an intense interest in civic affairs, and sat in the Fremantle Municipal Council for sixteen years, from 1903 to 1919, with one break of twelve months. For six years he was treasurer of the Fremantle Municipal Council. A prominent figure in Freemasonry, the late Mr. Nicholas was an officer of the Grand Lodge of this State.

Nicholas Crescent in Hilton is named for him.

Here’s Mr Nicholas, we believe, in the middle of the seated men, in the light grey coloured suit, immediately behind the tray. 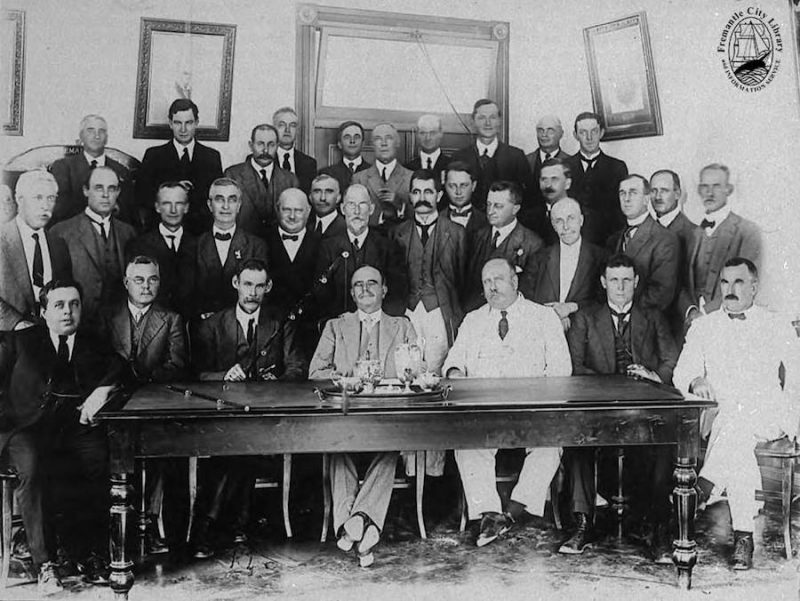 Thanks to Fremantle Stuff for this photograph

We have quite a few New Caledonia/Cook Pines along the median strip of Marine Terrace as you go South towards South Beach, in streets like Coral Street, South Fremantle, and in the South Beach park. 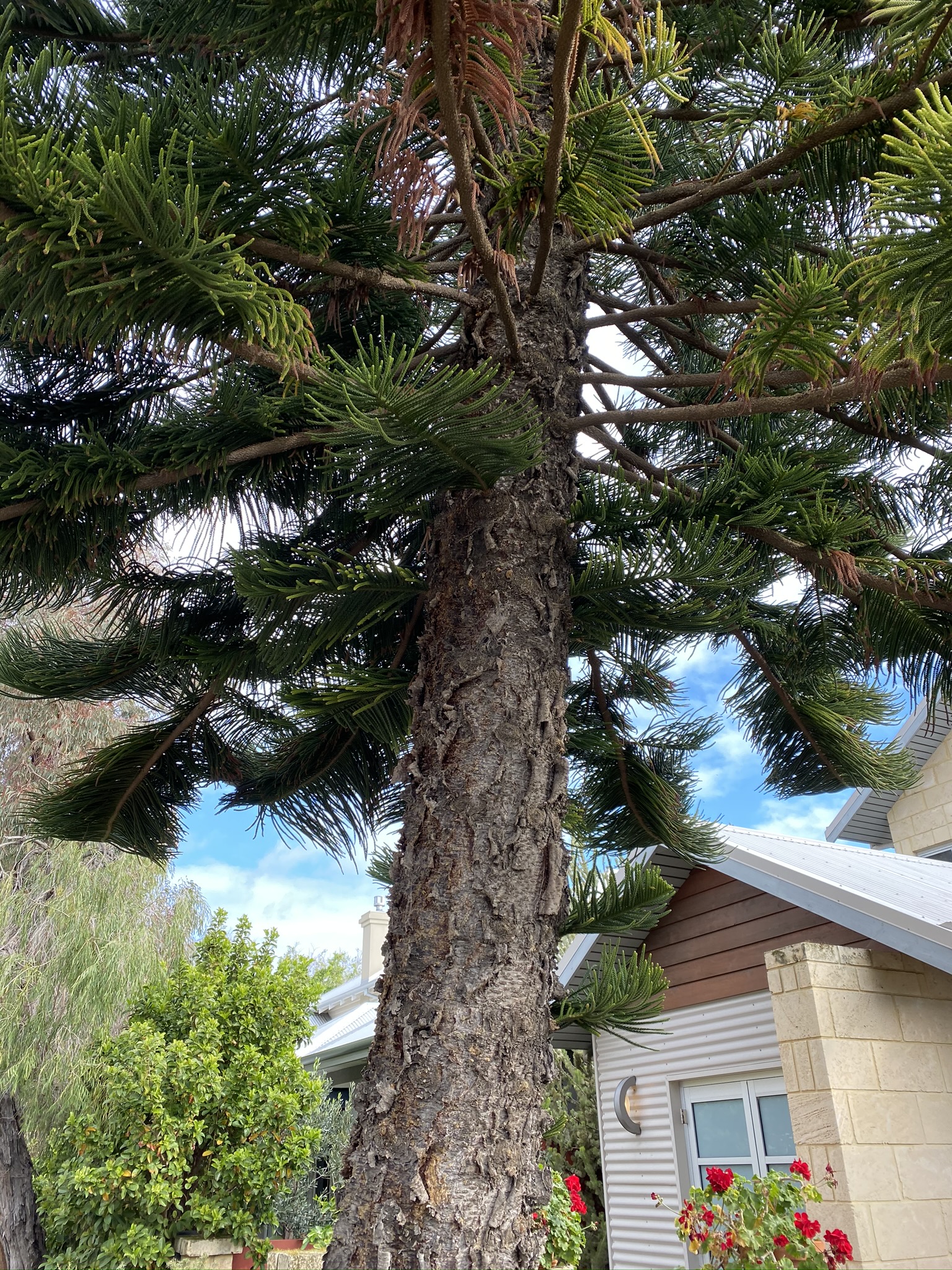 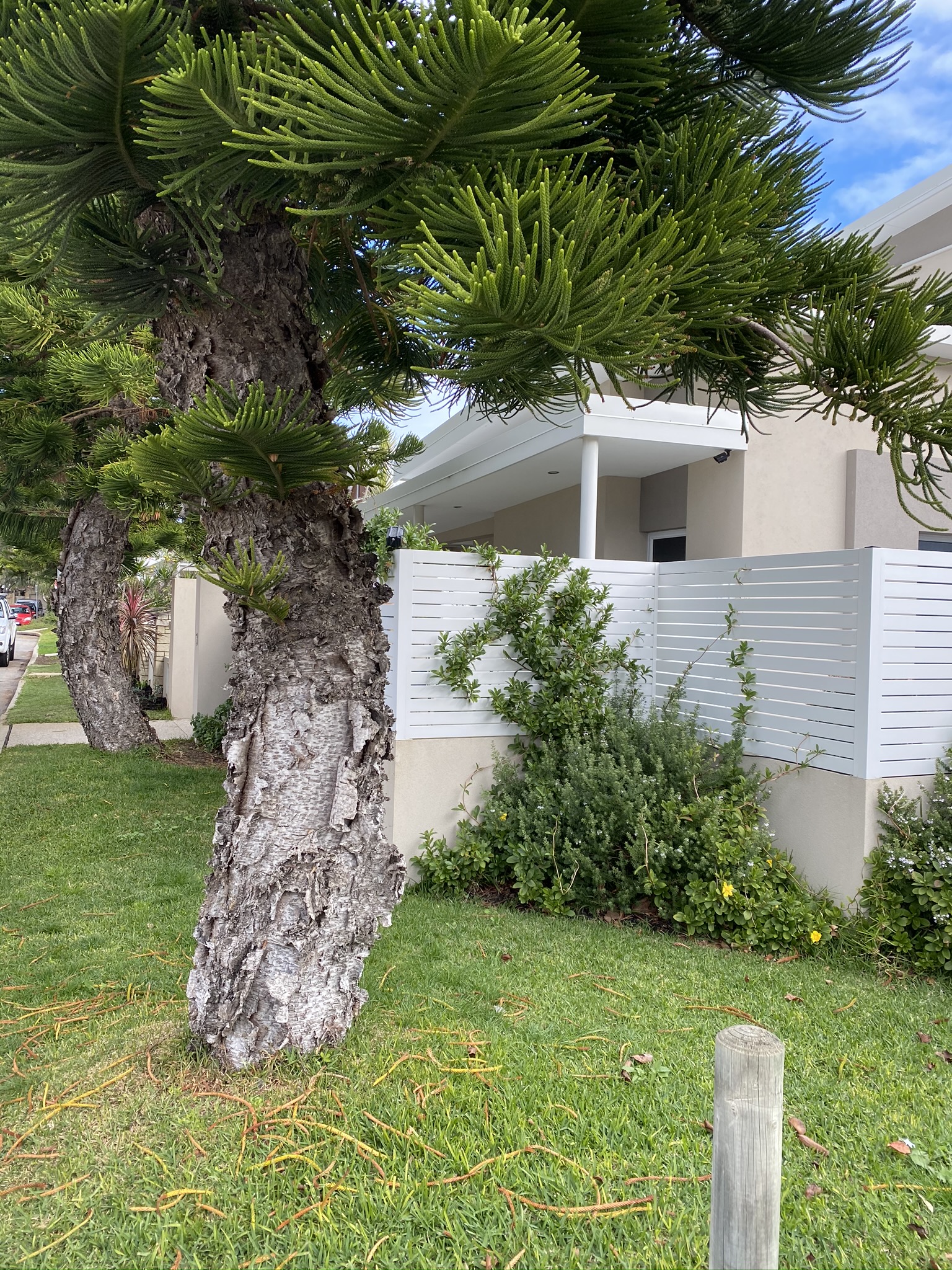 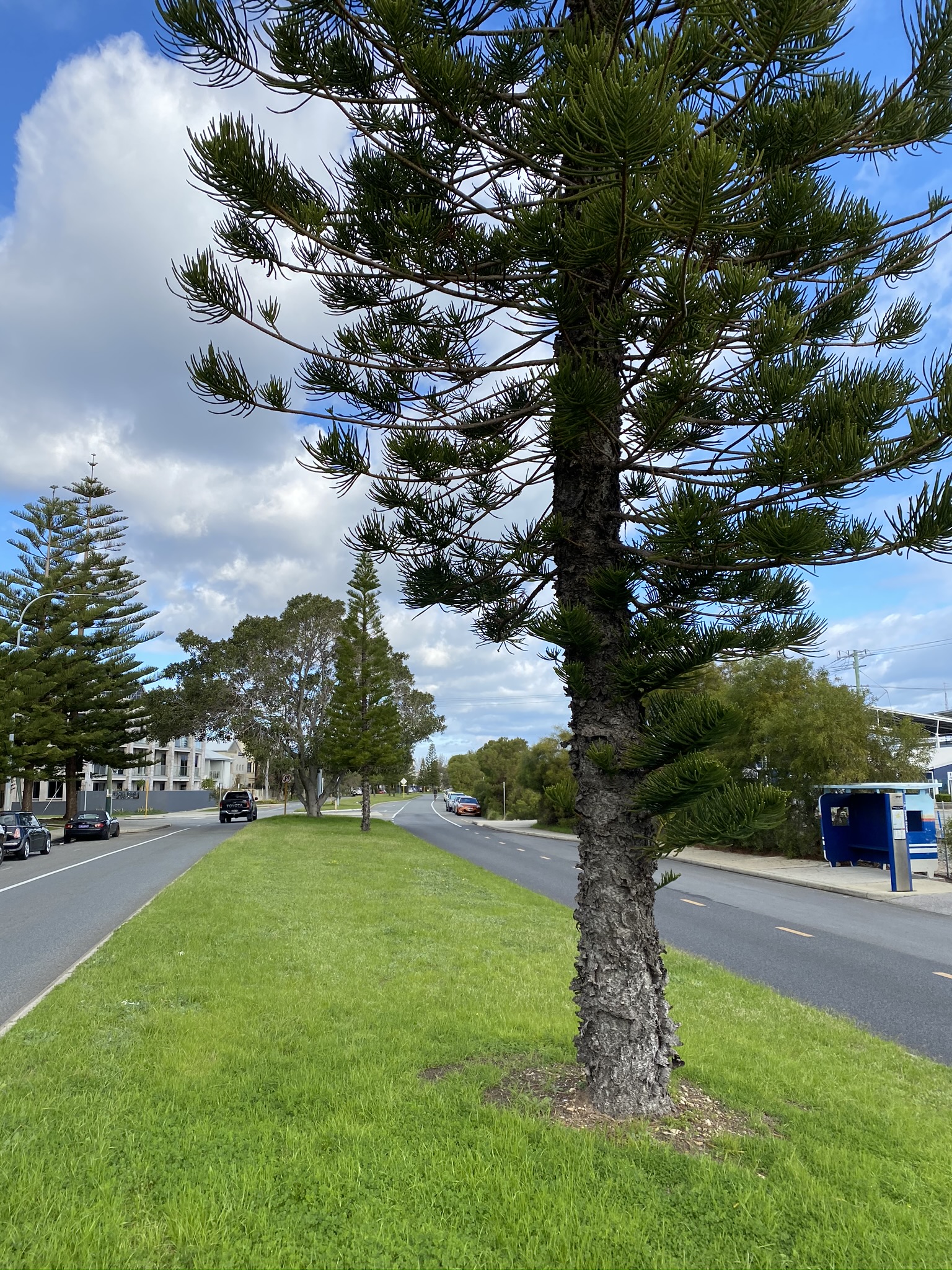 The question is, how do you tell one from the other?

The New Caledonia/Cook can most easily be distinguished from the Norfolk, as you will see by comparing the earlier Norfolk Pine photographs with these, by its rougher, curly bark and its less spaced foliage. In the Marine Terrace photograph in this gallery, the pine on the left side of Marine Terrace is a Norfolk, whereas the ones in the median strip are New Caledonian/Cook pines. Put perhaps unfairly, the New Caledonia/Cook Pine may be thought not to be quite as elegant as the Norfolk! But beauty, of course, is in the eyes of the beholder!

Wikipedia accounts for the New Caledonia/Cook Pine in these terms –

Araucaria columnaris (the New Caledonia/Cook Pine) is a distinctive narrowly conical tree growing up to 60 m (200 ft) tall in its native habit. The trees have a slender, spire-like crown.

The bark of the Cook pine peels off in thin paper-like sheets or strips and is rough, grey, and resinous.

The relatively short, mostly horizontal branches are in whorls around the slender, upright to slightly leaning trunk. The branches are lined with cord-like, horizontal branchlets. The branchlets are covered with small, green, incurved, point-tipped, spirally arranged, overlapping leaves. The young leaves are needle-like, while the broader adult leaves are triangular and scale-like.

Most interesting, I can hear you saying!

Which brings me to the seed pods. This last summer, whether Norfolk or New Caledonia/Cook Pines, the pods were dropping everywhere, and branches too. The seed pods became unusually heavy and whole branches fell to earth resulting in four parked cars, I understand, being written off. The City of Fremantle fenced off many of the pines to prevent bodily injury, or worse, to visitors to the City’s various parks, including The Esplanade.

All of this, though, kept the birds very happy. When I last visited the Esplanade Park, a large flock of noisy Corellas were happily munching on the thousands of leaves and pods scattered underneath – it is not just humans who adore these giants!

So, with the birds, enjoy the Esplanade. And when next you’re there, spare a thought for the lovely, 110 years plus, heritage Norfolk Pines, and for Councillor Nicholas who ensured we got them!

Finally, a note of caution. Do be careful, if meeting someone in the Esplanade at night, not to repeat the experience of a friend of mine who told me about a date he was meeting there. Apparently, he was having trouble finding her in a crowd after dark. She replied to his text message enquiring about her whereabouts saying – ‘I am under a pine tree’. He was not amused!

* If you’d like to tell us about your favourite Freo trees, contact us here. We’d love to hear from you.