We at the Shipping News, like all others, have been trying to understand how a young man could do what a young man did in Christchurch last Friday, as we grieve New Zealanders’ loss.

We republish two very thoughtful pieces from The Conversation, this by Michelle Grattan and another by Greg Barton, that may assist in this process.

Terrible tragedies test leaders to the full. Anyone watching from afar must be impressed with the way in which Jacinda Ardern has dealt with the aftermath of the Christchurch horror.

Ardern has kept her shocked population regularly updated, walked the talk in her embrace of the country’s Muslim community, and flagged policy changes in relation to New Zealand’s gun laws. She has radiated deep compassion while publicly holding her emotions under control.

Friday’s atrocity would inevitably hit Australians hard, given the two countries’ “family” relationship. But we’ve been dragged much closer to it because the white supremacist perpetrator is an Australian.

On top of that, a federal politician has made appalling and shameful comments.

Senator Fraser Anning, ex-One Nation, who became notorious for using the words “final solution” when urging a popular vote on immigration, in his Friday statement declared Islam “the religious equivalent of fascism”, and said that “just because the followers of this savage belief were not the killers in this instance, does not make them blameless”.

A day later, when he was “egged” by a 17-year-old while appearing in Melbourne, Anning hit the youth twice.

Unsurprisingly, some would have liked to see Anning expelled from the Senate for his comments.

The Senate doesn’t have the power to throw him out, but it would be a bad course anyway, setting an unfortunate precedent as well as making him a martyr in the eyes of the extreme right.

The voters will dispatch him soon. Before that, the Senate will denounce him, with government and opposition releasing a bipartisan motion on Sunday for when parliament resumes on April 2 for its final week. The motion censures Anning “for his inflammatory and divisive comments seeking to attribute blame to victims of a horrific crime and to vilify people on the basis of religion”.

It also “calls on all Australians to stand against hate and to publicly, and always, condemn actions and comments designed to incite fear and distrust”.

“Standing against hate” requires robust leadership from the politicians.

Scott Morrison and Bill Shorten have done what they should, and what you’d expect, in the immediate wake of the NZ attack.

Morrison’s language was direct and accurate, describing the assailant as “an extremist, right-wing, violent terrorist”.

The Prime Minister and Opposition leader, and other leading politicians attended gatherings of the Muslim community.

Morrison signalled that the big internet companies need to act, after the gunman’s live streaming took time to be removed.

But is this enough? The NZ attack has opened debate about extremism and what is likely to give or deny it succour in this country.

The countering of extremism of all sorts demands action on many fronts. One of them goes to political culture – that politicians should eschew the low road that self-interest too often leads them to take. The same, incidentally, should go for those in the media. 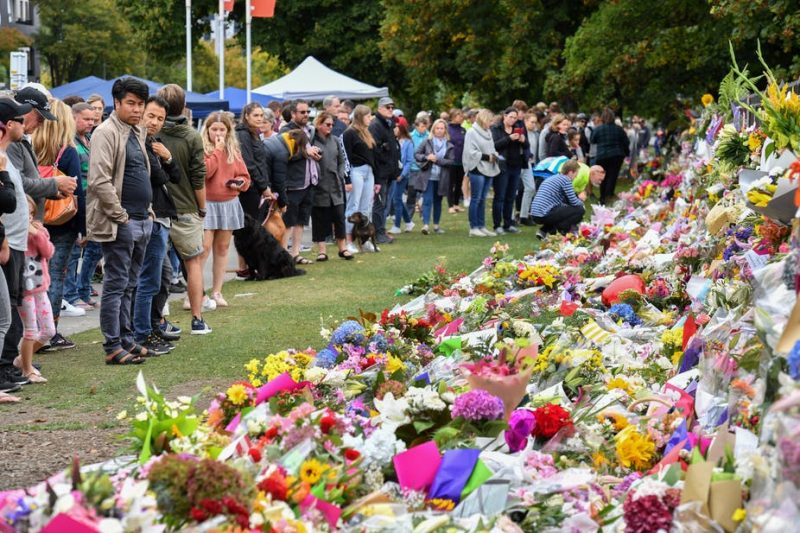 “Standing against hate” requires robust leadership from the politicians. AAP

We must put in a reality check here: history tells us it is impossible to guard absolutely against attacks from fanatics of whatever variety.

And we have to recognise also that in this battle the internet, for all its virtues, is a formidable enemy. It fertilises the spread of extremist ideologies of all brands. It both enables and encourages unbridled outpourings of hate.

Those with extreme views and seeking attention have a communications route and reach inconceivable when there was little more than the mainstream media, with its filters.

The internet is the convenient medium but it’s today’s political climate that is providing the environment for intolerant views to be given wider expression and greater legitimacy.

The culture wars and identity politics, favoured by right and left respectively, have sliced and diced the community, fracturing it rather than uniting it.

They rewrite the past, define the present, and poison the future.

The resulting conflicts and divisions are frequently marked by a degree of intensity and absolutism that carries risks for the public good.

In recent years politicians and commentators on the right have become preoccupied with what they see as restrictions on free speech.

But the commitment to “free speech”, admirable in itself, becomes dangerous when it morphs into a cover for hate speech or the targeting of minorities.

The Coalition government has itself been torn on the issue, as shown by its internal tensions over section 18C of the Racial Discrimination Act.

Now we have its chopping and changing on an entry visa for provocateur Milo Yiannopoulos for a speaking tour.

Despite the Home Affairs department telling Yiannopoulos he might not pass the “character test”, Immigration Minister David Coleman granted him the visa.

But following Yiannopoulos posting an offensive comment about the NZ attack, Coleman announced at the weekend he would not be allowed to come.

Immigration has always been a sensitive issue and successive waves of migrants have had their adjustment challenges. But immigration has become infused with ideology, and often a lightning rod for cultural complaint and bigotry, open or thinly disguised.

Discussion of immigration these days focuses minimally on its nation-building side, and frequently homes in on Muslims, stoking fears both of and in that community.

Among the mainstream right of politics, fuelling them-versus-us sentiments has been widely used as a political tactic.

This has been seen in the government’s blatant exaggeration of the consequences that could flow from the legislation passed by parliament to facilitate medical transfers from Manus and Nauru, and in its targeting of Labor’s plans to boost the refugee intake.

Earlier there was Home Affairs Minister Peter Dutton’s extraordinary claim that Victorians were “scared to go out to restaurants” because of “African gang violence”.

Bile flows freely when shock jocks get together with their political favourites, a regular feature of the airways today.

Australia has always had a particularly robust brand of adversarial politics but it has reached the stage where it is in desperate need of some tempering and self-discipline from political offenders.

The desirable immigration level, the appropriate size of the refugee intake and the like are legitimate matters for vigorous debate. But politicians (and media) should conduct those arguments much more responsibly than at present if they are serious about “standing against hate”.

A multicultural society will always require careful curation. It needs constant vigilance, general restraint and the avoidance of inflammatory language and claims for short-term political gain.

It’s no good being inclusive one day and shrill and politically expedient on another.