Home 2020 May 28 Places I Love – Fremantle’s Coastal Bike Path: Cycling into the future

When covid struck the world, my treadly had been collecting dust for quite some time. Social distancing and self-isolation became the norm. The gym was out of bounds for exercising, so I pumped up my tyres and started using my bike. Cycling is travelling at a different pace, you see more, hear more and absorb a lot more. And I’m biking here, and biking there. 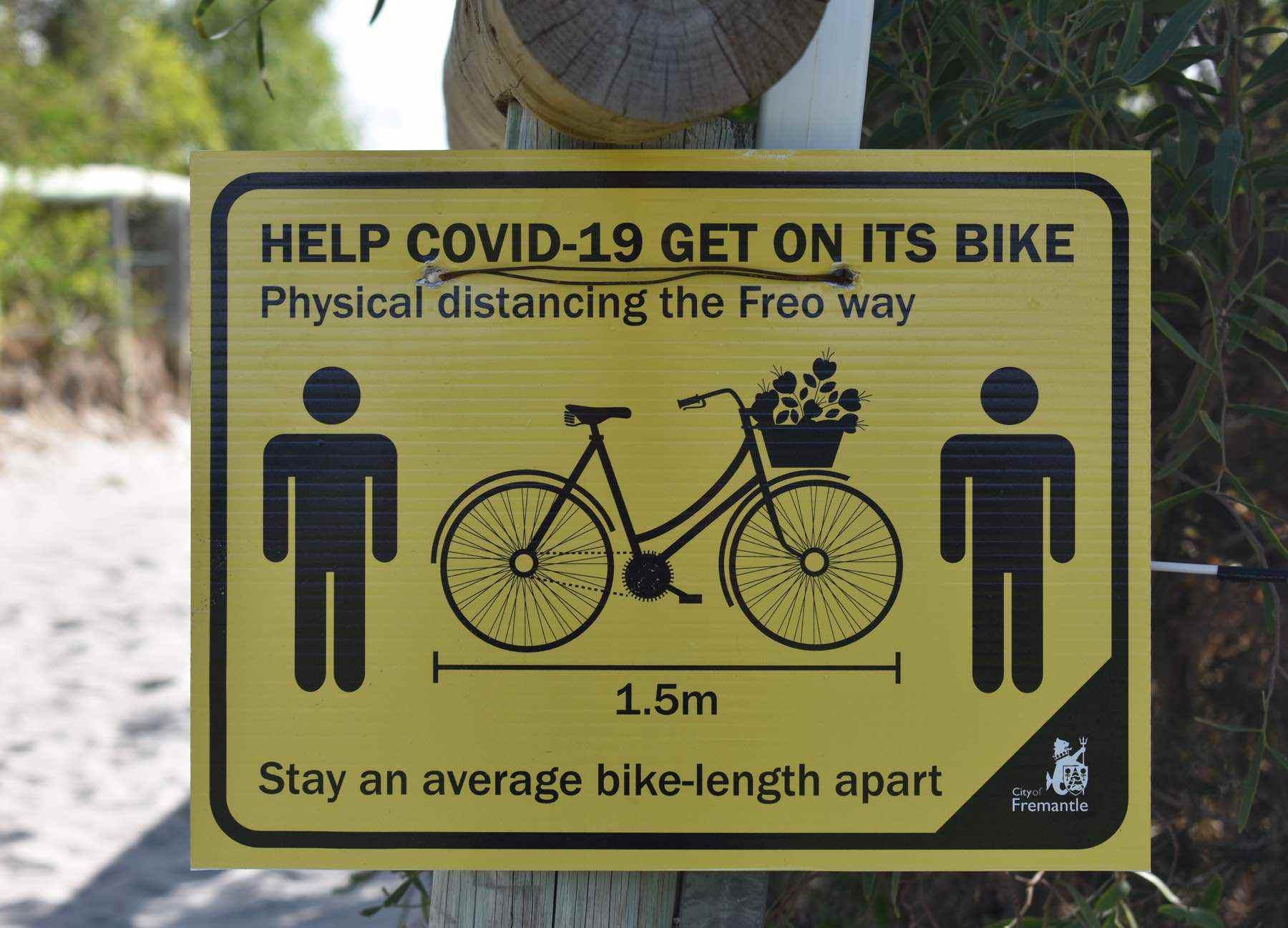 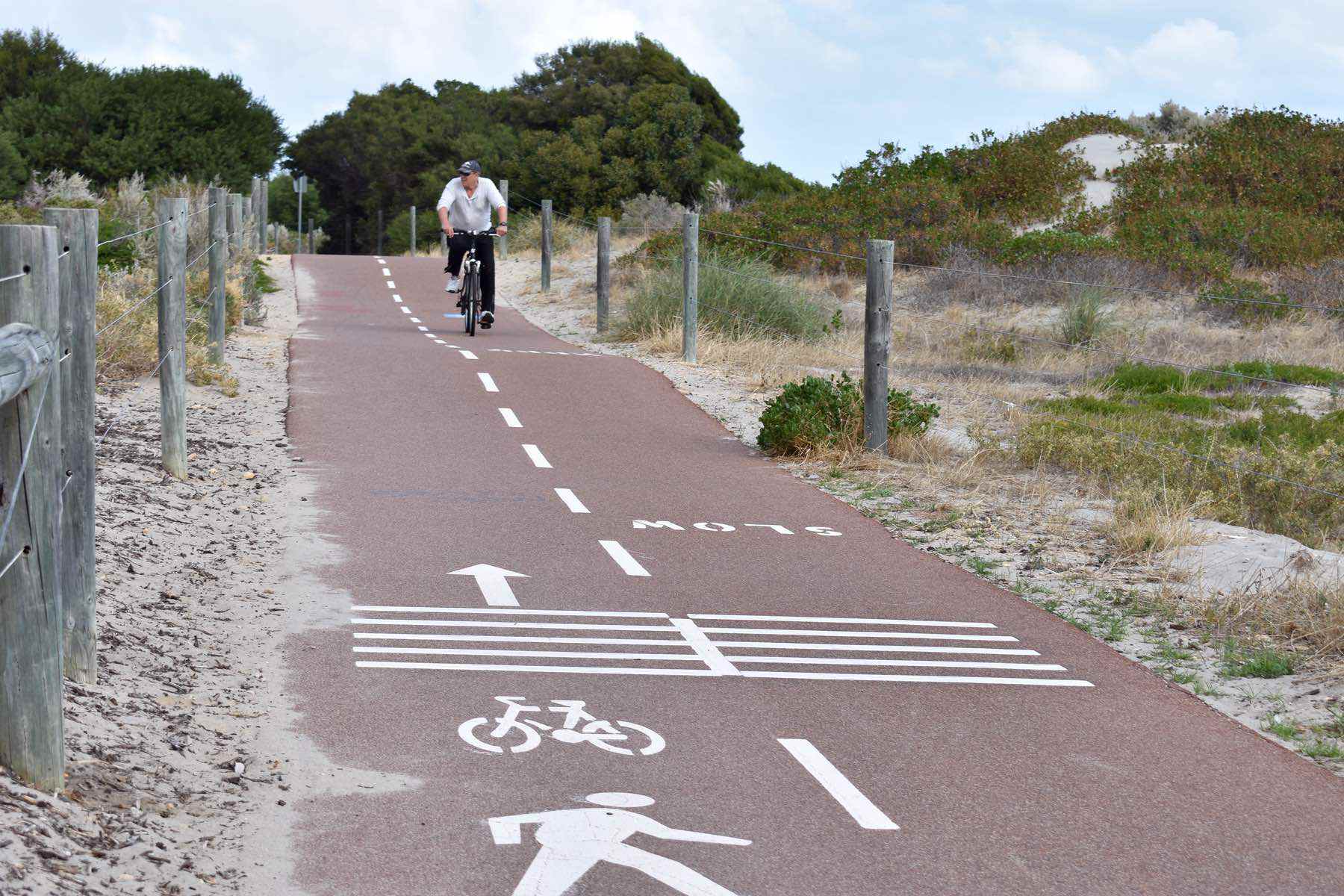 One of my favourite bike rides is the coastal route from Fremantle to Woodman Point.

Fremantle Fishing Boat Harbour is a good place to start. It’s like a Monet painting; with boats perfectly reflected in the glassy water. The Esplanade Ferris wheel stands still, and a freight train rumbles by. Doves reclaim the train tracks once the train chugs past.

The stretch from Fishing Boat Harbour to South Beach can be busy with families, cyclists and walkers. The written signage on the bike path always makes me smile: sand in my hair, sand everywhere, cold ice cream drips and eat if quick, to mention a few. This path is less crowded early in the morning. 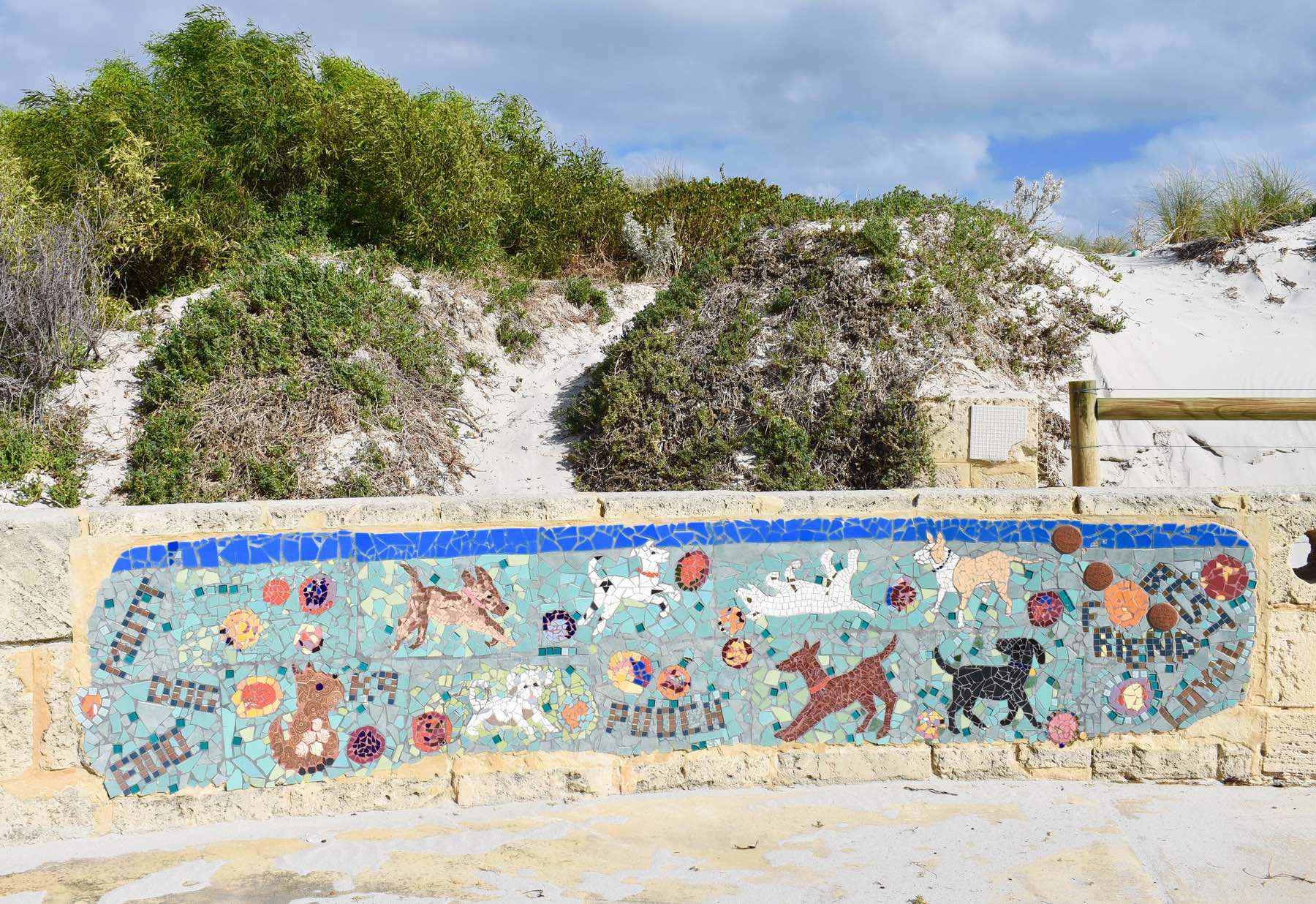 I cycle past South beach. There are plenty of parked bikes: serious road bikes ridden by lycra clad enthusiasts, old fashioned sit-up-and-beg bikes with baskets, bikes with crates on the back for transporting dogs, adult tricycles and kids bikes. (You’ll find South Beach in our feature on Fremantle Beaches here). White cockatoos have claimed the grassy areas. 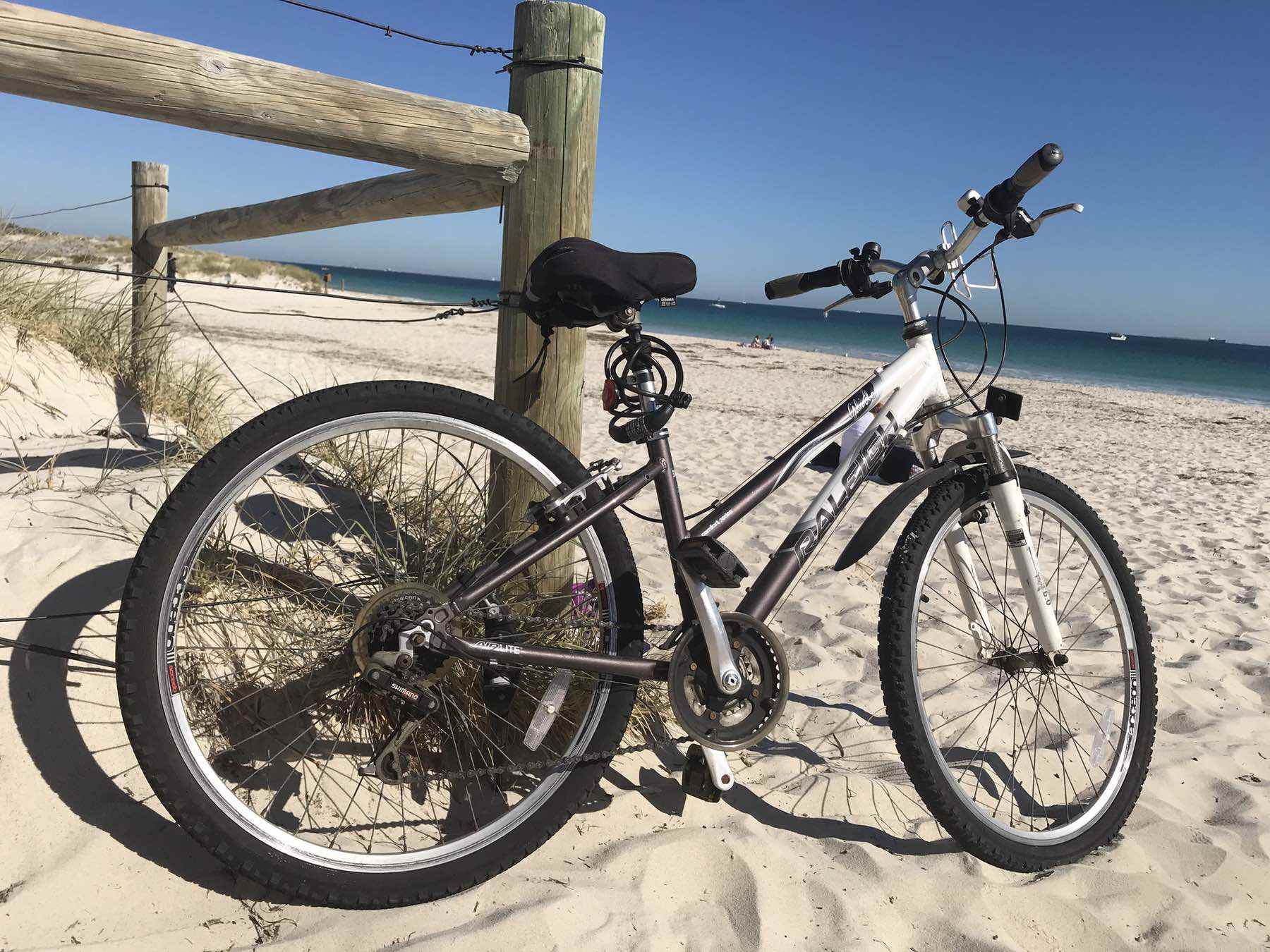 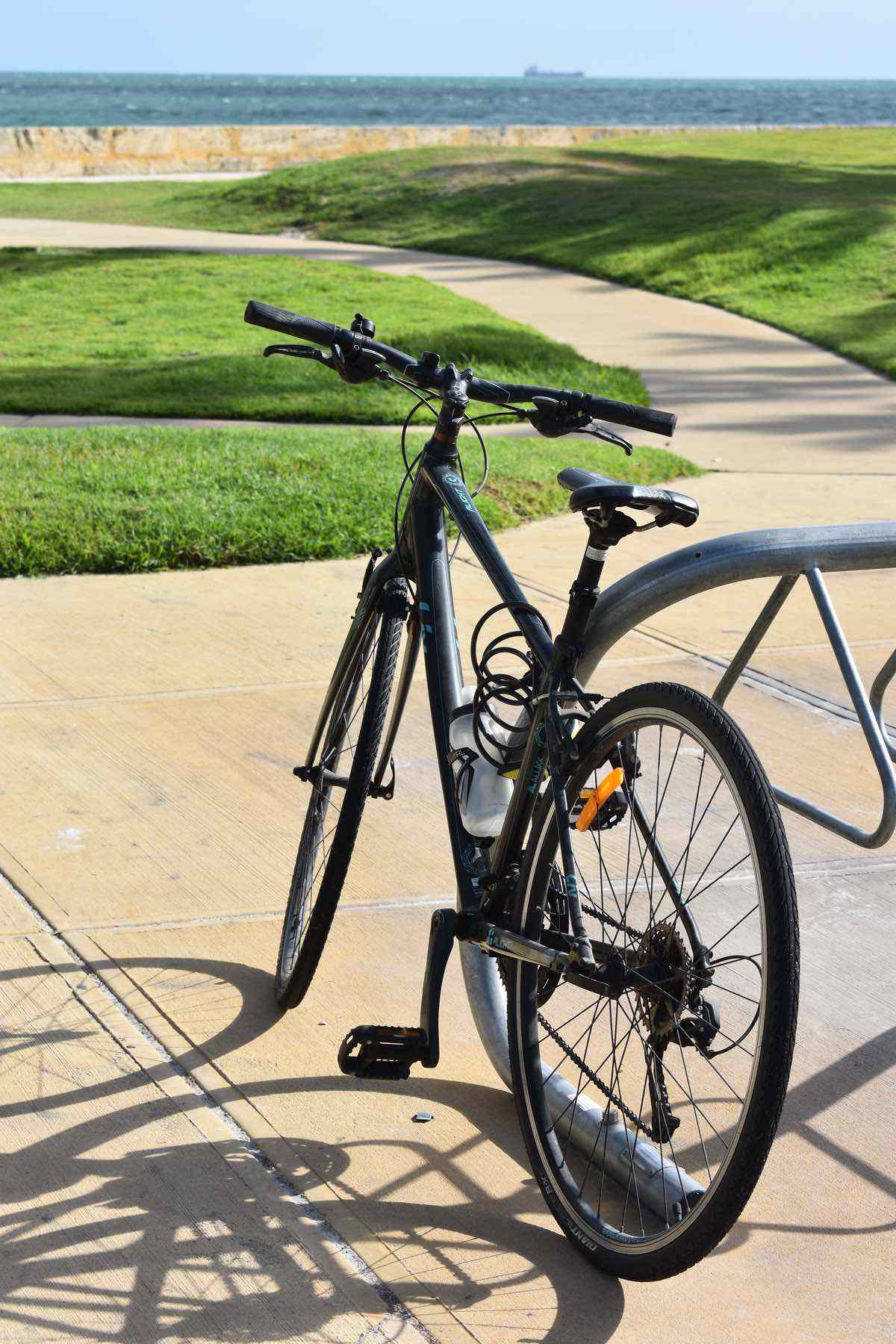 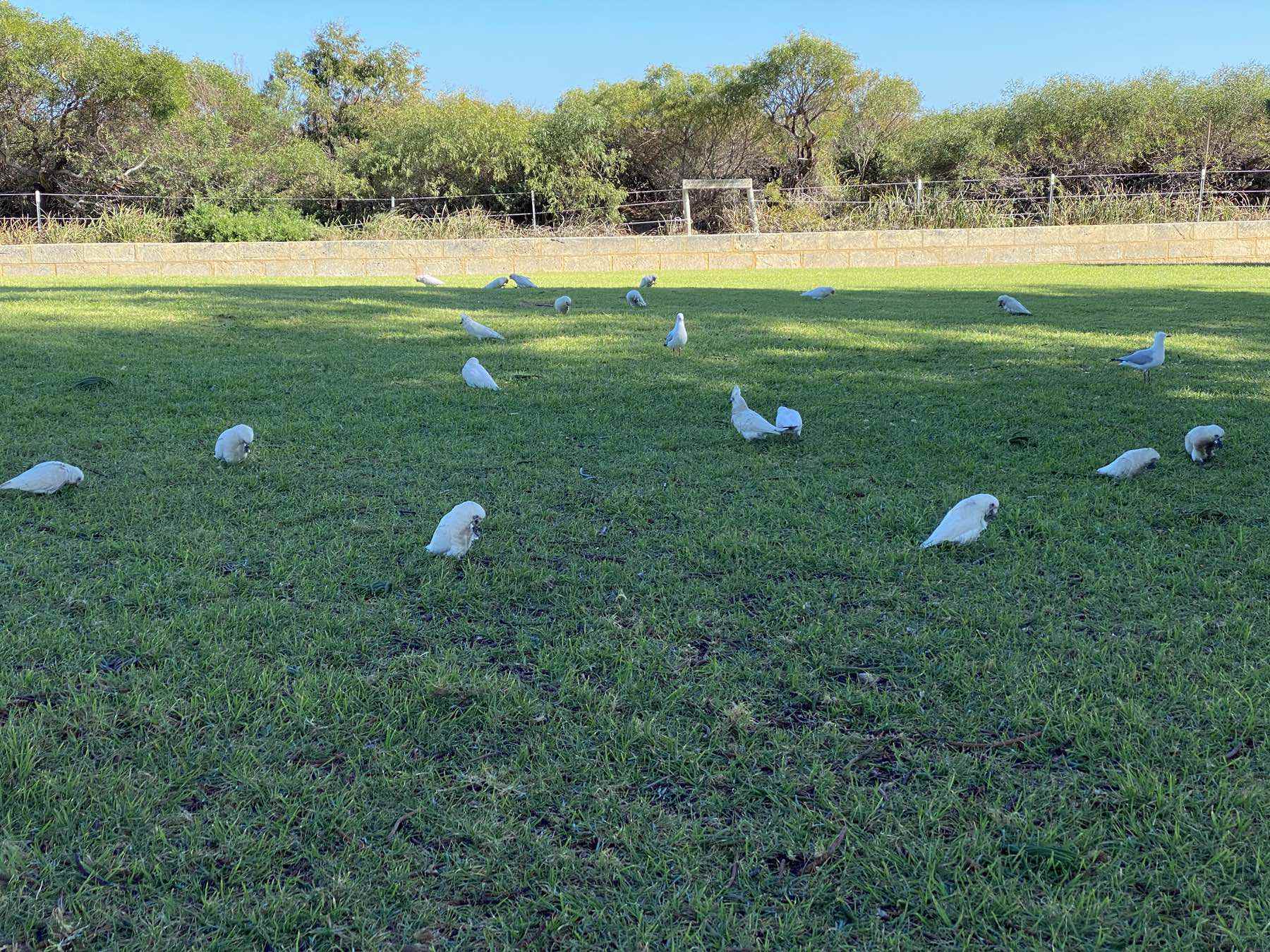 The trail south of South Beach has a good surface and is less crowded. The sky is big and blue, with no contrails. There are wonderful views of the ocean and out to Garden Island. Birds twitter and dart in the scrub and dune vegetation. Remnants of history are dotted along the trail.

I stop at CY O’Connor beach, where Robb’s Jetty used to be. On the landside is a cattle crush decorated with rusted wrought iron cattle motifs. Livestock were shipped here from the Kimberley and interstate.

The cattle were unloaded from ships onto the jetty or into the water, and then herded up the beach to the nearby holding yards and abattoir. The Robb’s Jetty Abattoir closed in 1994 – the now heritage listed chimney is all that remains from the holding yards and meat works. 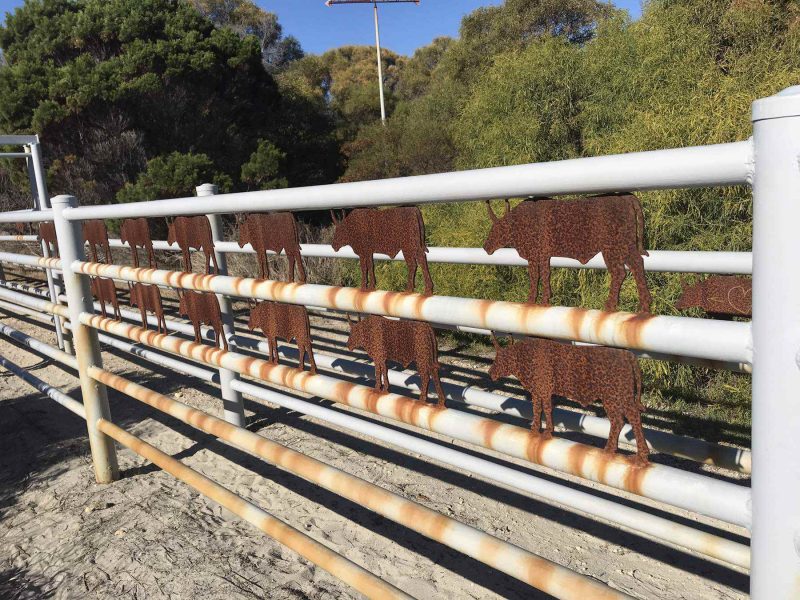 The tide is out and the water is crystal clear, it’s easy to see the old pylons of the jetty just below the water. Robb’s Jetty was built in 1887 for sailing ships arriving from the southwest and interstate. It became the second harbour for Perth. Until the 1890’s the area and jetty were known as Owen Anchorage. The jetty was dismantled in 1960.

The rusted wreck of the SS Wyola is located halfway along the beach. She was built in 1912 as a steam tug, then dismantled and buried at Robb Jetty in 1970. 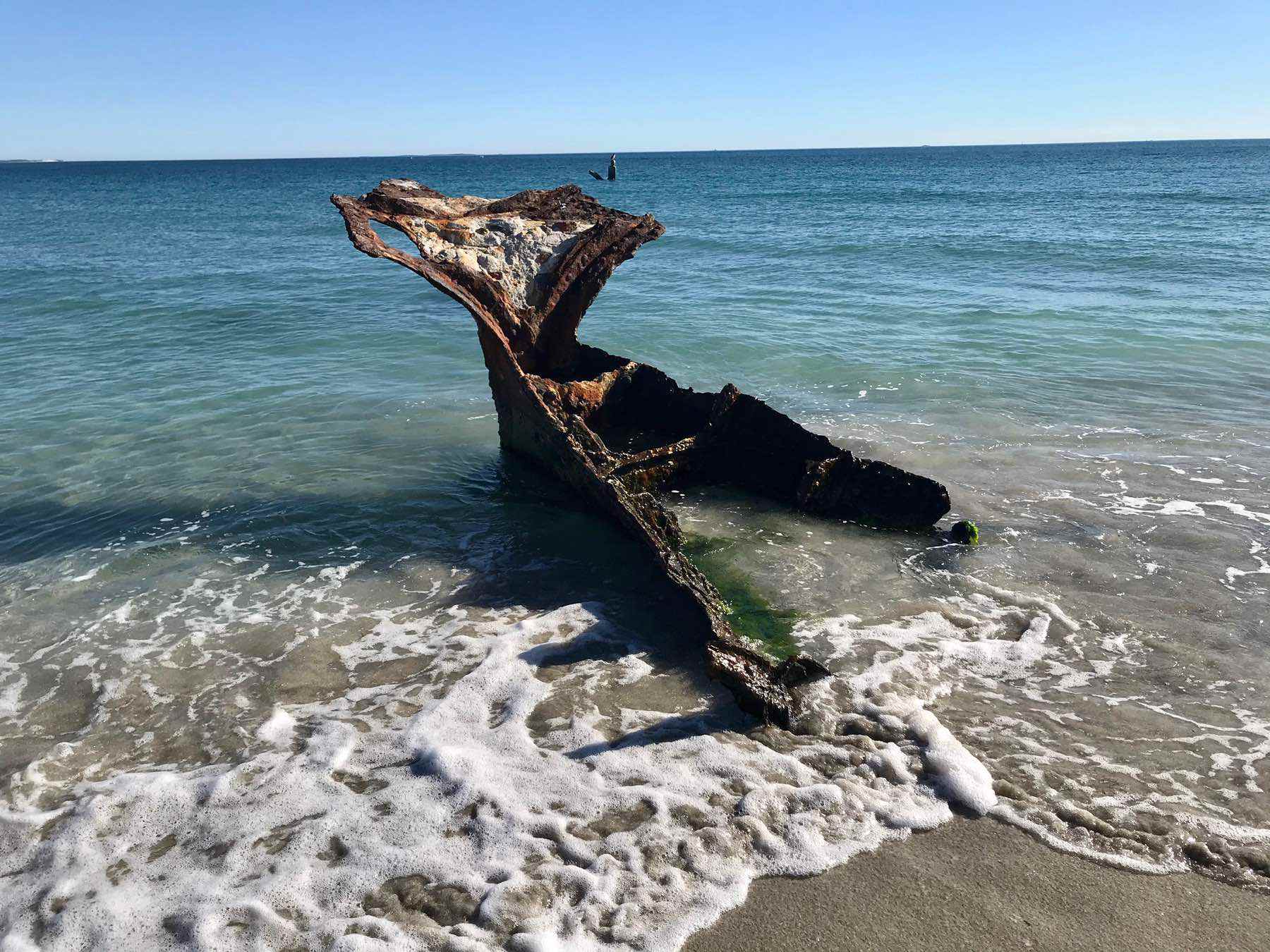 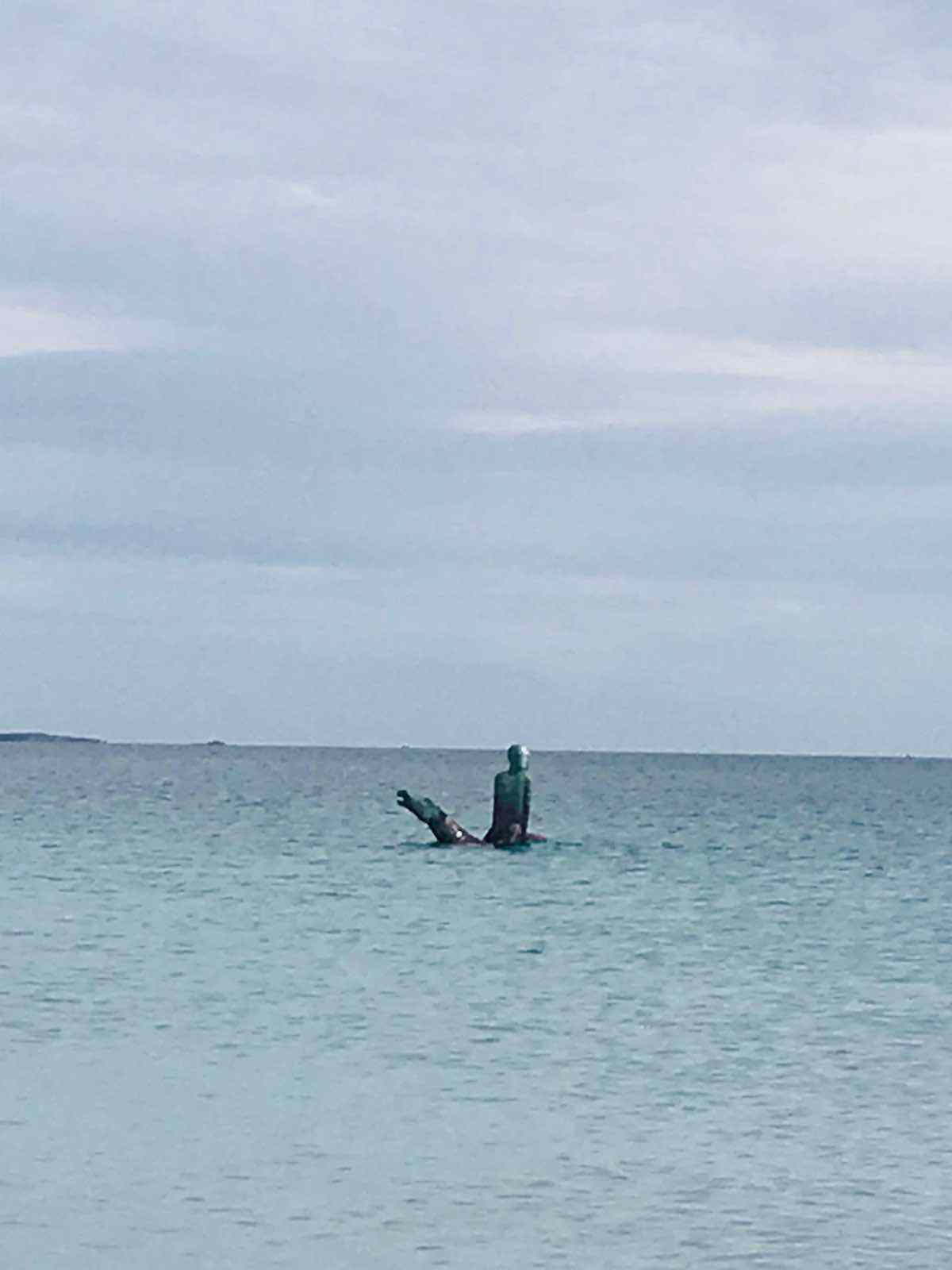 Thirty metres offshore is a bronze sculpture of a man astride an unsaddled horse, commemorating CY O’Connor. In 1902, he rode his horse into the water and, sadly, ended his life. The rider and horse face Fremantle Harbour.

CY O’Connor, an Irish engineer, designed the 556-kilometre goldfields water supply scheme from Mundaring to Kalgoorlie, Fremantle Harbour and all the railways in Western Australia between 1891 and 1902.

It was following prolonged criticism over the water supply scheme, that CY took his own life. Regrettably, he didn’t live to see its completion. The novel The Drowner by Robert Drewe provides a fictional account of O’Connor and the building of the pipeline.

Nowadays, CY O’Connor Beach is a favourite spot for locals. The beach is dog and horse friendly. There is a large shady grassed area with a SS Wyola inspired playground, showers, toilet and BBQs.

Back on my bike, I cycle through a tree tunnel. It always reminds me of the tree tunnel in the Game of Thrones TV series. On the other side of the tunnel, the coastal trail diverts away from the coast and around the derelict South Fremantle Power Station. It opened in 1951 and ran for 34 years. It is now covered in graffiti. Many would love to see it brought back to life.

Well beyond the Power Station, I stop at Coogee Beach for a swim. The Omeo wreck, only 25 metres from shore is a popular snorkel and dive site. I’ve covered the Omeo before. Have a deeper look here: Omeo, Omeo, Wherefore Art Thou Omeo? – Fremantle Shipping News.

Last stop is Woodman Point, at the southern end of Coogee Beach. I love the views up and down the coast.

Cycling home, the breeze is on my back and the afternoon sun is glittering on the ocean. I often daydream of holidays cycling along the French canal towpaths, or around colourful Amsterdam, but right now I am happy to be in Fremantle.

The Tour de France may be cancelled, but the number of people taking to their bikes has rocketed. People have pulled out their long-forgotten bikes or purchased new ones. Perth bike shops reported a 48 per cent increase in sales during April this year.

According to the City of Fremantle’s metro bike counter, the average number of daily riders at Leighton Beach was 230 from June 2019 to February 2020. During April and early May this year, it skyrocketed to 740!

A new stretch of bike path, along the Fremantle train line, opened in August 2019. It links Grant Street in Cottesloe to Victoria Street Mosman Park. Usage on this path more than doubled during COVID-19 restrictions. The next section from Mosman Park to North Fremantle is set for completion in 2021. That’ll be real fun!