In our report in late November 2020, we explained the terms of the Treaty, and showed you the area of the South West of the State covered by it.

Now we are pleased to report that the Noongar Boodja Trust, that is central to the Treaty, is active and that the State has begun making significant transfers of funds into the Trust.

On Monday, 29 March 2021, the directors of SWALSC – the South West Aboriginal Land and Sea Council Aboriginal Corporation – came together with representatives of the WA Government and Perpetual Trustees to sign the deed for the Trust. 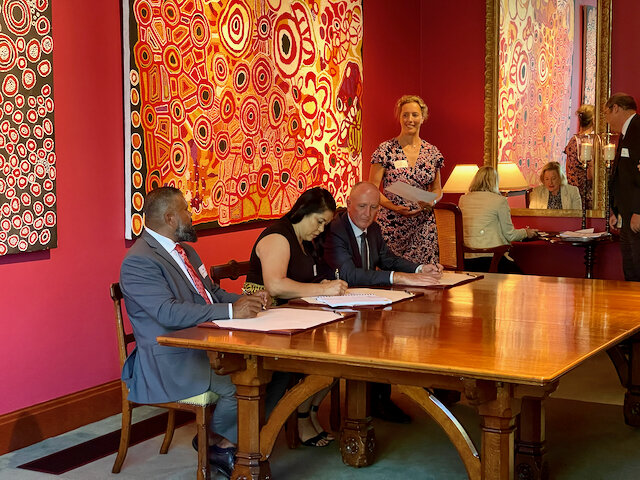 The signing ceremony took place at Government House in the presence of The Honourable Kim Beazley AC, Governor of Western Australia, and Noongar elders who have committed decades of their lives’ work to the pursuit of justice for the Noongar community.

During the ceremony, the settlor for the trust deed, Mr Bill Lawrie, the Minister for Aboriginal Affairs, the Hon Stephen Dawson MLC, and SWALSC representatives Vanessa Kickett and Barry Winmar signed the trust deed and security deed documents.

The signing of the trust deed documents officially appoints Perpetual Trustees as the trustee for the Noongar Boodja Trust and signifies the trust effective date, or the date the trust commences.

The commencement of trust enabled the benefits under the Treaty to start flowing into the Trust.

Then on 1 May 2021, SWALSC reported that the first contributions from the State to the Trust had been made under the Treaty.

Acknowledging the payments, SWALSC Chairperson, Brendan Moore, said it was a significant milestone for the Noongar Nation.

“The payments that have been made by the State to the Noongar Boodja Trust on 22 April 2021 are the first of many benefits that will flow to Noongar people under the settlement,” Mr Moore said.

“The first of twelve annual payments of $50 million have been paid into the Future Fund. This money is managed by the Perpetual Trustee Company and will be protected so that all future Noongar generations will be able to benefit from the settlement,” Mr Moore said.

A further $10 million has been deposited into the Operations Fund—an annual payment also for 12 years.

The money paid into the Operations Fund will be used to fund the operations of the six Noongar regional corporations and the central services corporation that will be established as part of the Treaty settlement.

SWALSC says that these payments integrate Noongar into the mainstream economy as never before and provide opportunities for economic development and a greater role in decision making about land.

SWALSC is currently holding community information meetings across the South West to progress the establishment of the six regional corporations and the central services corporation.

“I encourage all Noongar people to attend these meetings to find out more about the settlement and the establishment of the regional corporations and central services corporation,” Mr Moore said.

It is anticipated the six Regional Corporations will be established by September 2021.

Fremantle Shipping News notes it has taken from May 1829 – when Captain Fremantle anchored his vessel, Challenger off present day Fremantle, then as now Noongar Walyalup, in anticipation of the arrival of the first British settlers at the new Swan River Colony – until now – 192 years later – for this Treaty to be done and to become operational.

We congratulate the Noongar Nation on their tenacity in doing the Treaty and wish them every success under the Treaty in the years ahead.