Each week we’ll be featuring an artist included in the Help the Homeless Art Auction.

This week the featured artist is Reg Mombassa.

Chris O’Doherty, known by the pseudonym Reg Mombassa, is as well known as an artist as he is a musician.

He formed rock band Mental as Anything in 1976 with four other art students, to play at art school parties. In the early days of the Mentals, the band would often invent pseudonyms for each other that combined an exotic last name with a common Australian first name. “Reg Mombassa” was one of the products of that amusement. O’Doherty has stated in interviews that some of his earlier pseudonyms included “Brett Orlando” and “Dorky Bladder”. Although they didn’t initially intend to be a serious band, the Mentals eventually turned professional. They subsequently released 11 albums and 27 singles, with 20 entering the top forty, and toured Australia, New Zealand, Canada, England, Europe, the United States and Asia.

The band has held three group art exhibitions in 1982, 1990 and 1998. The 1990 show toured regional galleries in NSW, ending at the Westpac Gallery in Melbourne. The 1998 also toured throughout Australia.

He left the Mental’s in April 2000 after 25 years, so he could concentrate on art.   A survey of his artwork spanning thirty years opened at SH Ervin Gallery in Sydney in 2007, officially opened by actor Jack Thompson.

Mombassa’s artwork is in two distinctive styles. The type of artwork he designs for Mambo Graphics – almost cartoonish and in vivid colours, incorporating religious, political and popular culture themes – is probably the style he is most widely known for. However his landscapes and portraits, many inspired by his childhood in New Zealand, are equally sought after.
His artwork is included in the permanent collections of the National Gallery in Canberra , the  Powerhouse Museum in NSW and the  University of Sydney.

Chris says Reg is inspired by the wind, semi-professional birthday clowns, heavy machinery and the behaviour of domestic animals. 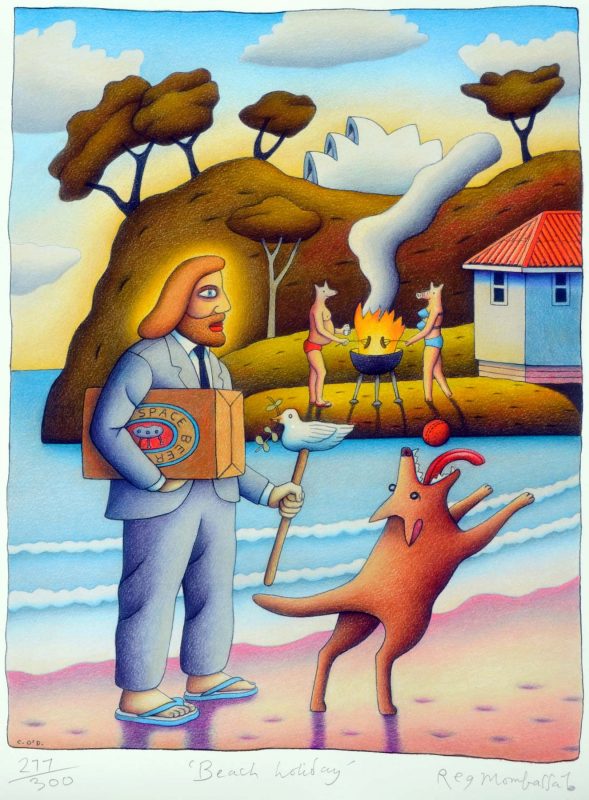