Alan Carter’s fifth novel has just been released by Fremantle Press. It’s the fourth to feature supersleuth, DS Philip ‘Cato’ Kwong. You can buy it hard or soft. We read it on Kindle.

Cato is now mid-forties, remarried and the father of his second child.

He is also in the midst of a terrible series of murders in central Fremantle. A serial killer seems to be on the loose. Quite shocking really. All this while the Mayoral elections are taking off. Could they possibly supply one of the suspects?

Now, writing a book review that gives away the plot, especially in the case of a crime thriller, is not a good career move for any reviewer, so the less said about it the better. What can be said is that Cato 4 is a success. Alan Carter’s loyal band of readers will not be disappointed. As they walk the streets of Freo and make their ways to their favourite watering holes and beach spots, they will recount the murder locations with glee, but not without a little apprehension. Those who visit Freo on the lure of Cato 1-4, using them as some sort of travel guide, will see bodies everywhere and danger lurking at every shadow. They will be reluctant to venture out after dark. But they will also know where to find good coffee in the morning.

The slightly scary thing is that, once again, in Heaven Sent, Carter manages to evoke the real Fremantle, right down to his favourite haunts, and to twist a compelling plot into Freo’s very real urban fabric. Just occasionally he goes further afield.

You never want to rush your way through Carter’s novels. He brings suspense regularly. You keep guessing at the culprit or culprits, or he makes you keep guessing. And the plots have the right touch of plausibility to them. Everything seems far fetched at first, except it isn’t. In this only, his novels are Trump-like. In every other way, they are anything but.

Carter always manages to cleverly weave a contemporary social and political conscience into his work. It doesn’t bite the reader hard, but it does make you stop and consider. In this novel it is the question of homelessness – something very visible in Fremantle –  and how we, the not homeless, respond to the homeless; or how we might respond to them.

Carter also has a wonderfully wry sense of humour. He has you chuckling, out loud, at regular intervals. He might have been a stand-up comic. In this case, the best of many might be – not giving anything away – when two policemen are chatting and one expresses some surprise that they now have a class on Accountability and Ethics at the Police Academy: ‘Just before the one on Taser Training’, the other explains.

Heaven Sent is a tightly written crime novel with a good, and fearful plot. It is a worthy successor to its predecessors. Cato is at his maturing best. A guy for modern times. His present links to the past. But he keeps growing. That doesn’t necessarily mean there is less sex, but it may! That the action occurs mainly around Freo is a bonus for local readers, but the book could be set anywhere – why not Freo? Cato admirers will not be disappointed. A clambering for Cato 5 will soon be heard. Something tells me, though, that the Marlborough connection is still alive, and well. We will have to wait and see! 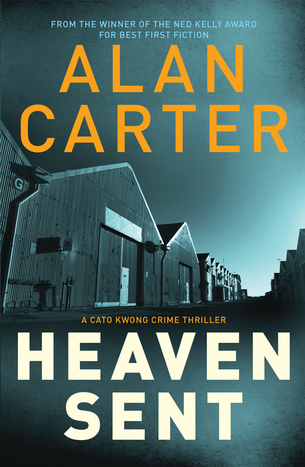