The southern edge of central Fremantle has a complex of three harbours – Challenger, Fishing Boat and Success. Recently, I wrote about Fishing Boat Harbour. Today, I focus on Challenger, which is to the northern end of the three. 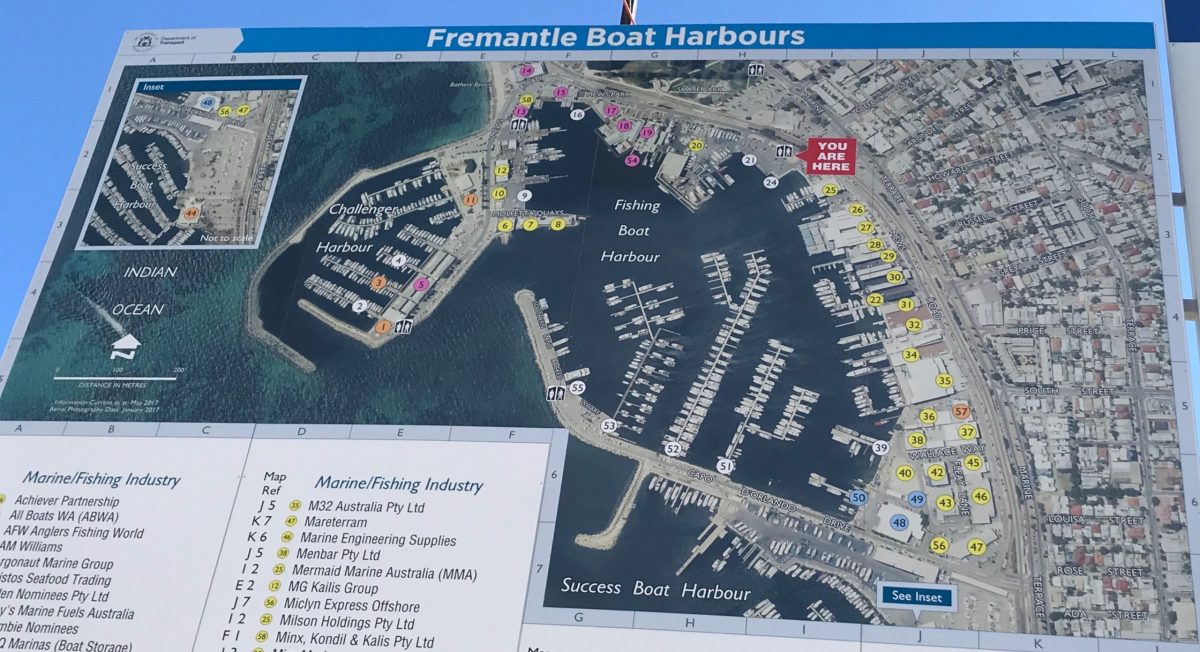 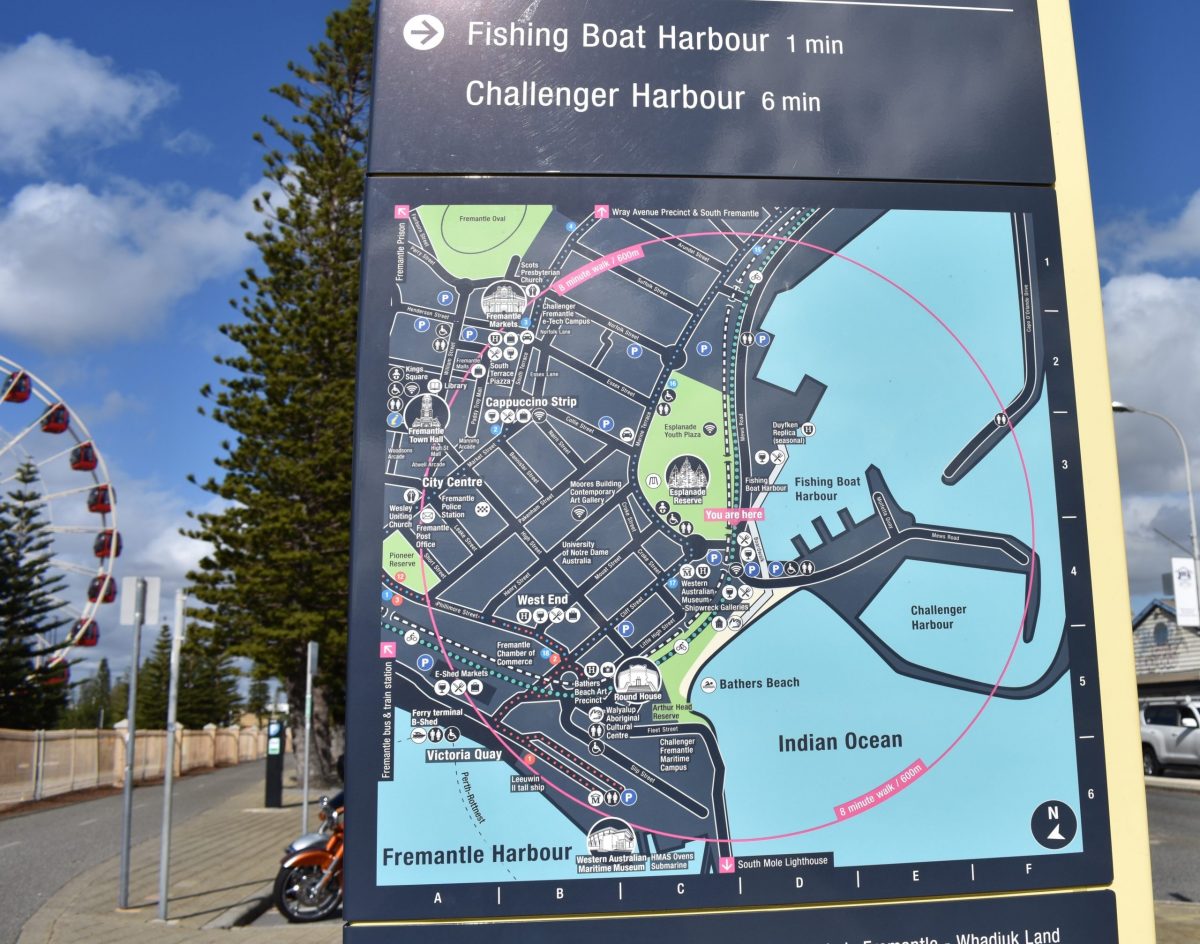 Challenger Harbour is named after the schooner HMS Challenger, which was under the command of Captain Charles Fremantle, after whom Fremantle is named. It was he who, on 2 May 1829, a whole month before Captain Stirling and the first British colonists arrived at the Swan River Colony, hoisted the British flag on Arthur Head, to claim the region for the British Crown. 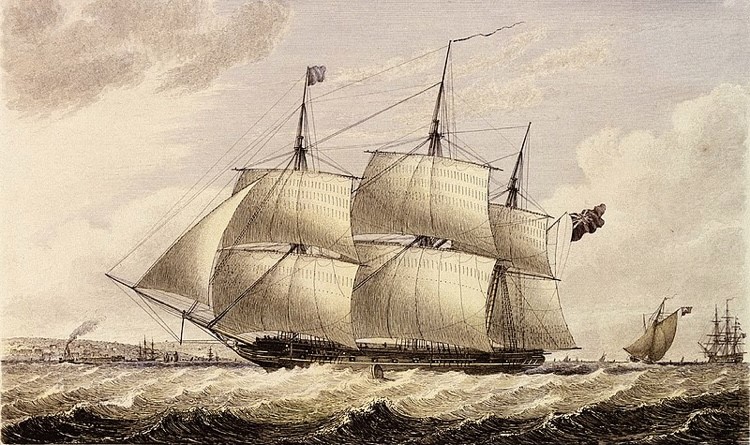 Challenger Harbour was built for the 1987 America’s Cup Yacht Race, which took place off the coast of Fremantle. It included facilities specifically for berthing 12-Metre class racing yachts. Royal Perth Yacht Club hosted the event. A new stone breakwater was also built on the southern end of the harbour, to protect it from the ocean.

The harbour breakwater covers the historical site of the later Fremantle Long Jetty. 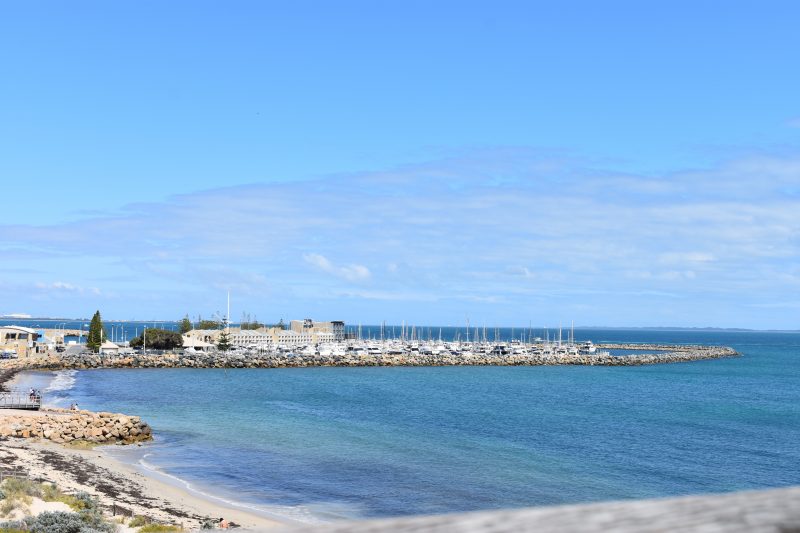 The first America’s Cup Yacht Race was held in England, in 1851, and was named, ‘The Royal Yacht Squadron’s 100 pound Cup’. The cup was awarded to the winner of a race around the Isle of Wight.

The schooner ‘America’, from the New York Yacht Club, won the race – after which the cup was subsequently named. Queen Victoria watched the race and is said to have enquired who came second? ‘Your Majesty, there is no second,’ came the reply. 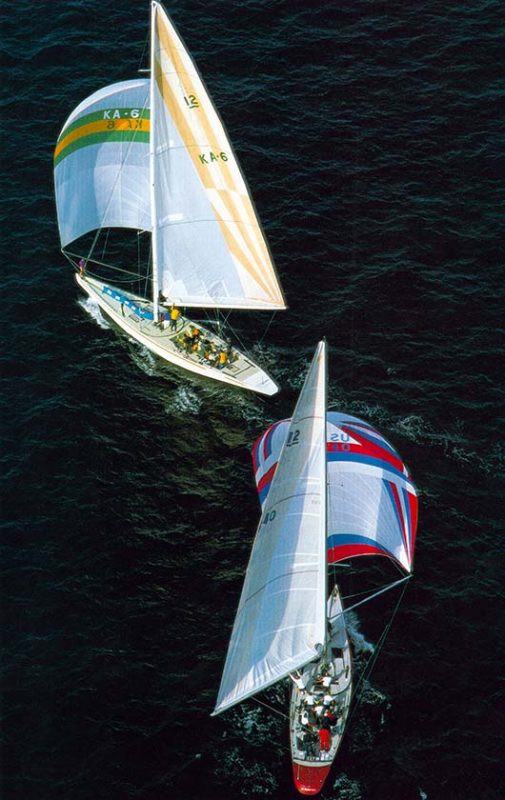 The late Alan Bond financed the Royal Perth Yacht Club’s entry ‘Australia II’ for the 1983 challenge. The ‘Men from Down Under’ brought a secret weapon – Australia II had a radical winged keel, designed by Ben Lexen, which was kept hidden until it was finally revealed to hysterical fans after the final race. She sported a boxing Kangaroo flag in the rigging.

Due to the time difference, the final race took place in the early hours of the morning in Australia, but much of the nation stayed up to watch the historic victory on television. Australia won the Americas’s Cup and it was the first time in 132 years that a country other than the USA had won. So it was then Perth’s turn to host the America’s Cup Yacht Race off Fremantle. 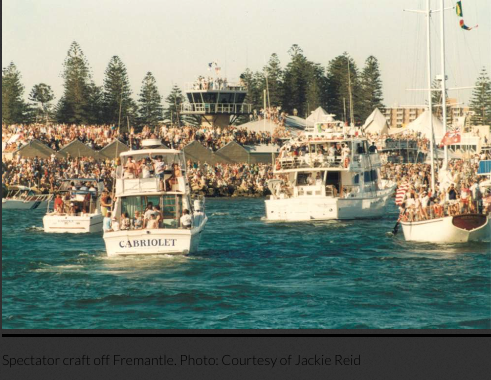 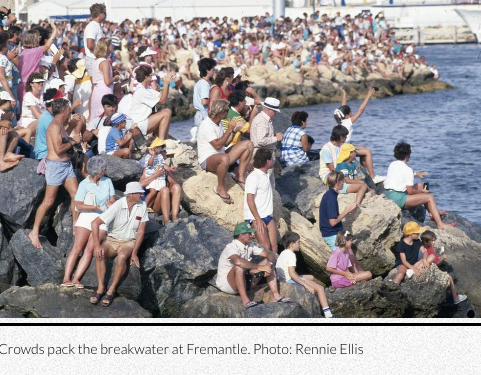 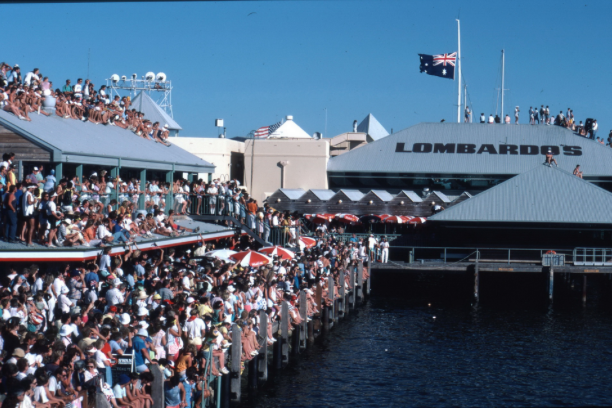 The 1987 America’s Cup season in Fremantle will be etched for ever on the memories of all lucky enough to be there. Freo was spruced up for the event. Boats and sailors came from around the world. Thousands of people lined the harbour, groynes and beaches to watch the races. Television coverage of the races with clear blue skies and clear blue water put Fremantle on the map. I remember watching the coverage from Ireland and hoping that one day I would visit Fremantle! Little did I know it would be my home less than 10 years later. 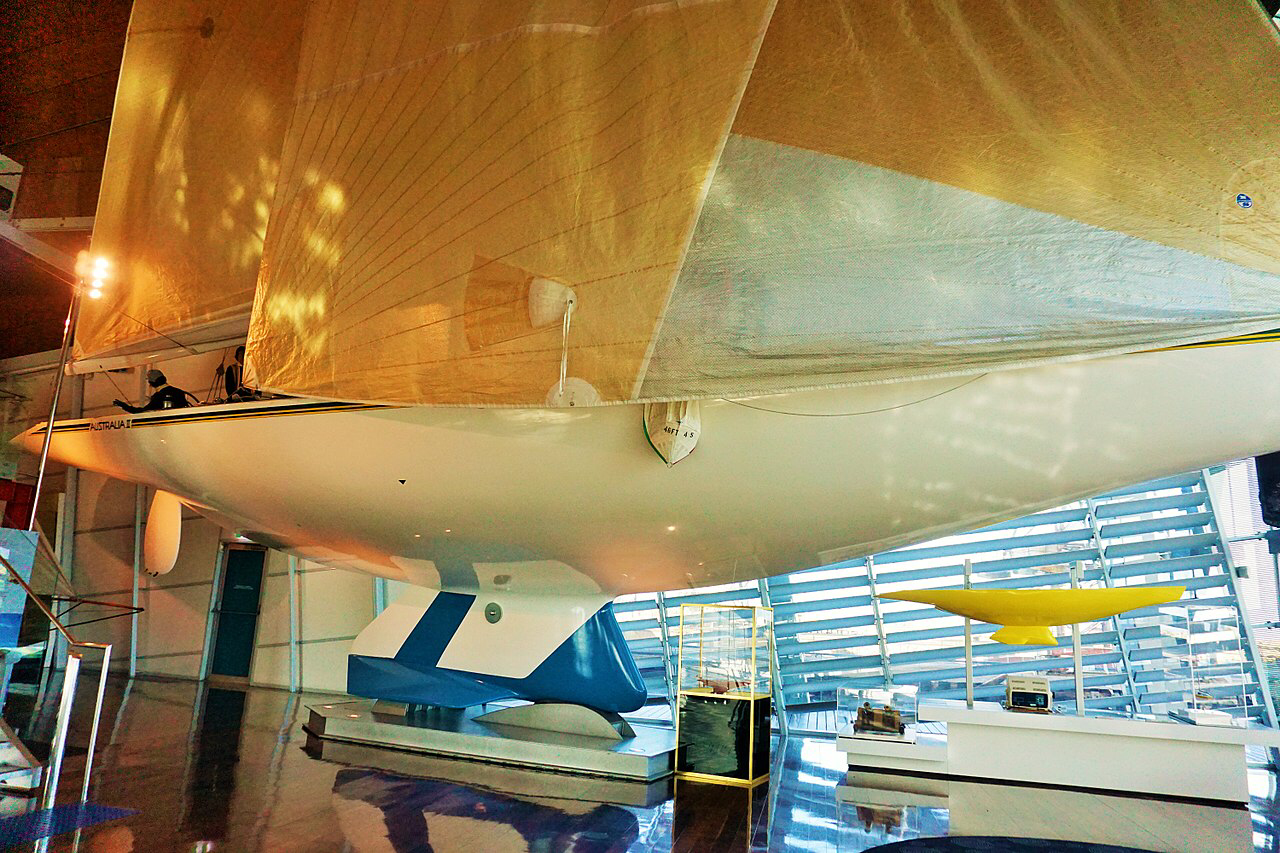 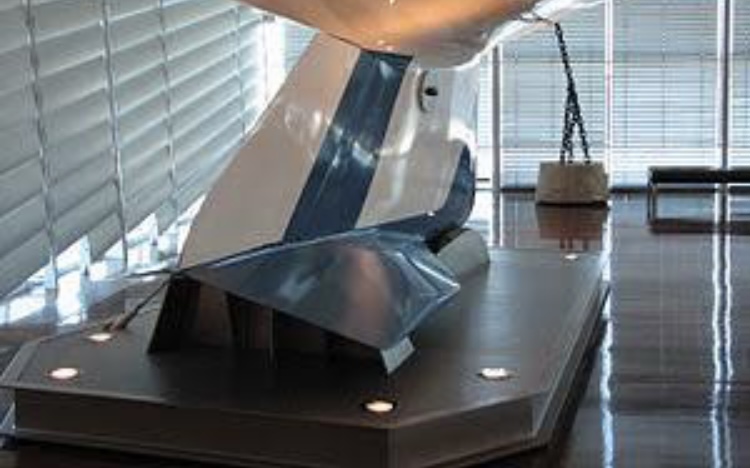 By the way, Australia II can be found today resting, or hanging more precisely, in the Maritime Museum at Victoria Quay, Fremantle.

Last month, New Zealand won the 36th America’s Cup in Auckland. This year’s boats – AC75s – are unlike anything we have ever seen before and arguably are the most radical boat the America’s Cup has ever seen. These huge 75 feet long and 16 feet wide boats with bow-sprits and foils are as much aircraft as boat. Huge marina development would have to take place if Fremantle was to host the Americas’s Cup again in the future. 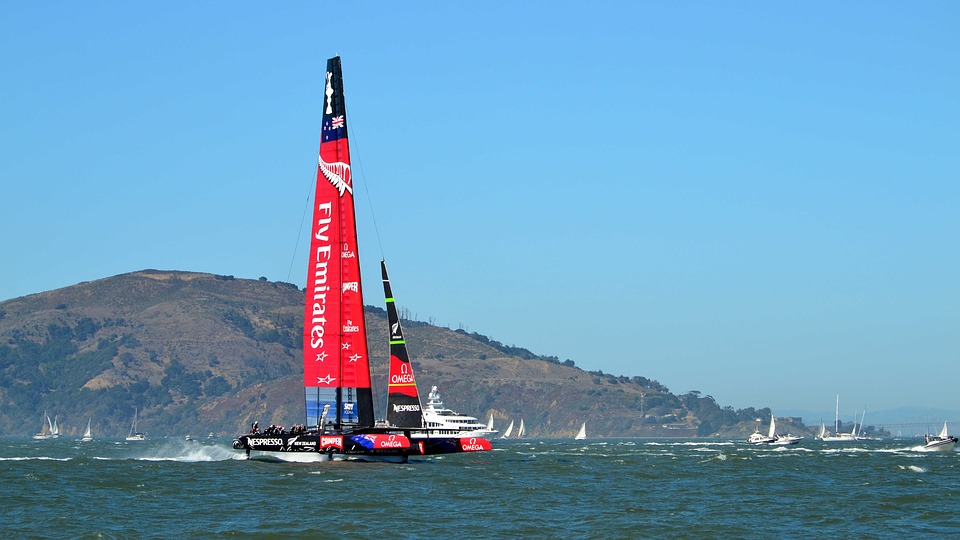 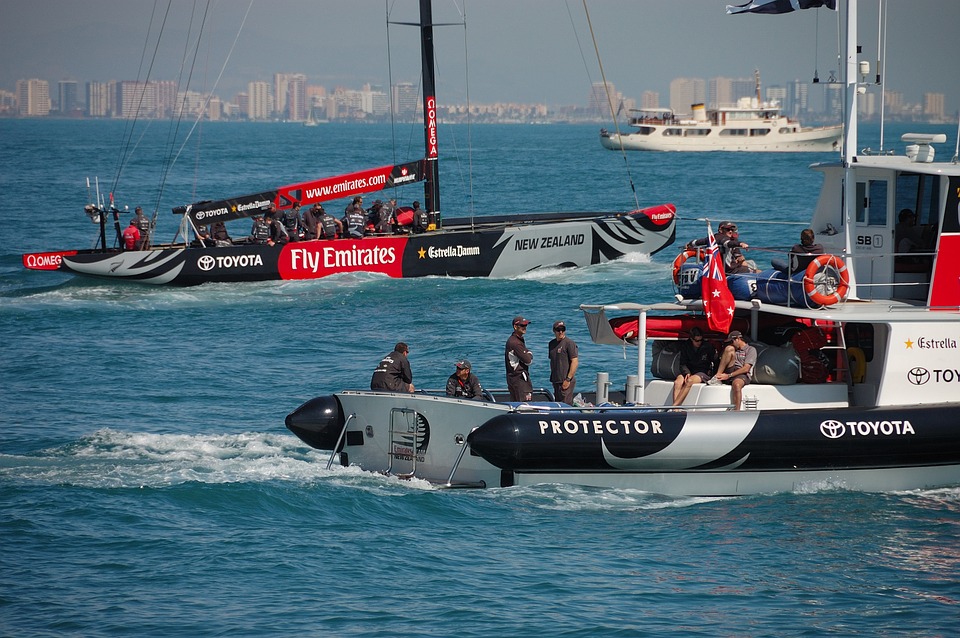 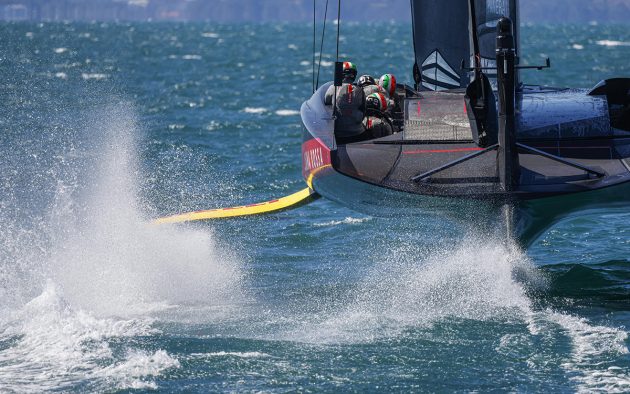 Challenger Harbour was modified after the Cup was lost at the end of 1987, to cater for recreational vessels only, including leases to Fremantle Cruising Yacht Club and Royal Perth Yacht Club’s Annex. This location offers easy access to the Indian Ocean. It is difficult for boats from the river yacht clubs to compete in offshore races, as yachts have to lower their masts to travel beneath the traffic bridges that cross the Swan River, or Derbarl Yerrigan, leading up to the inner harbour. 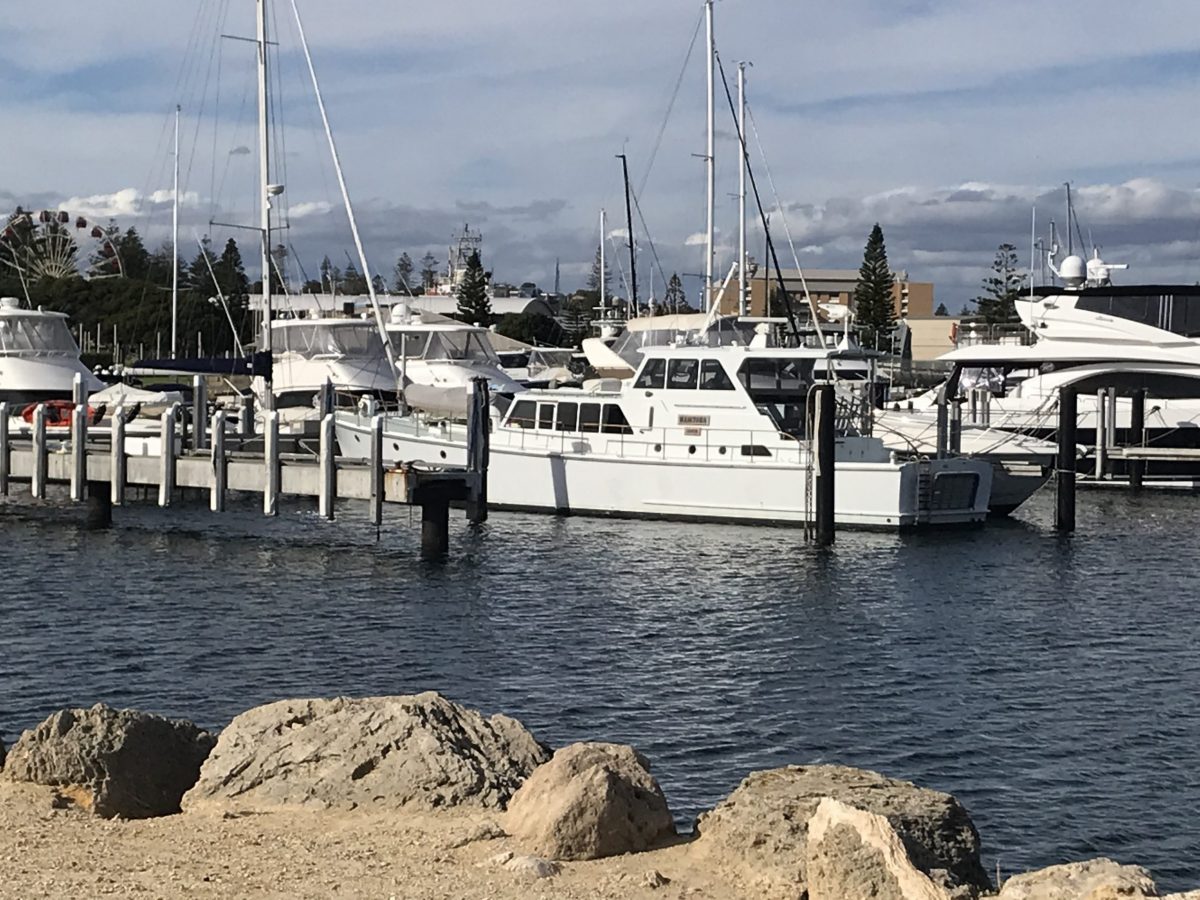 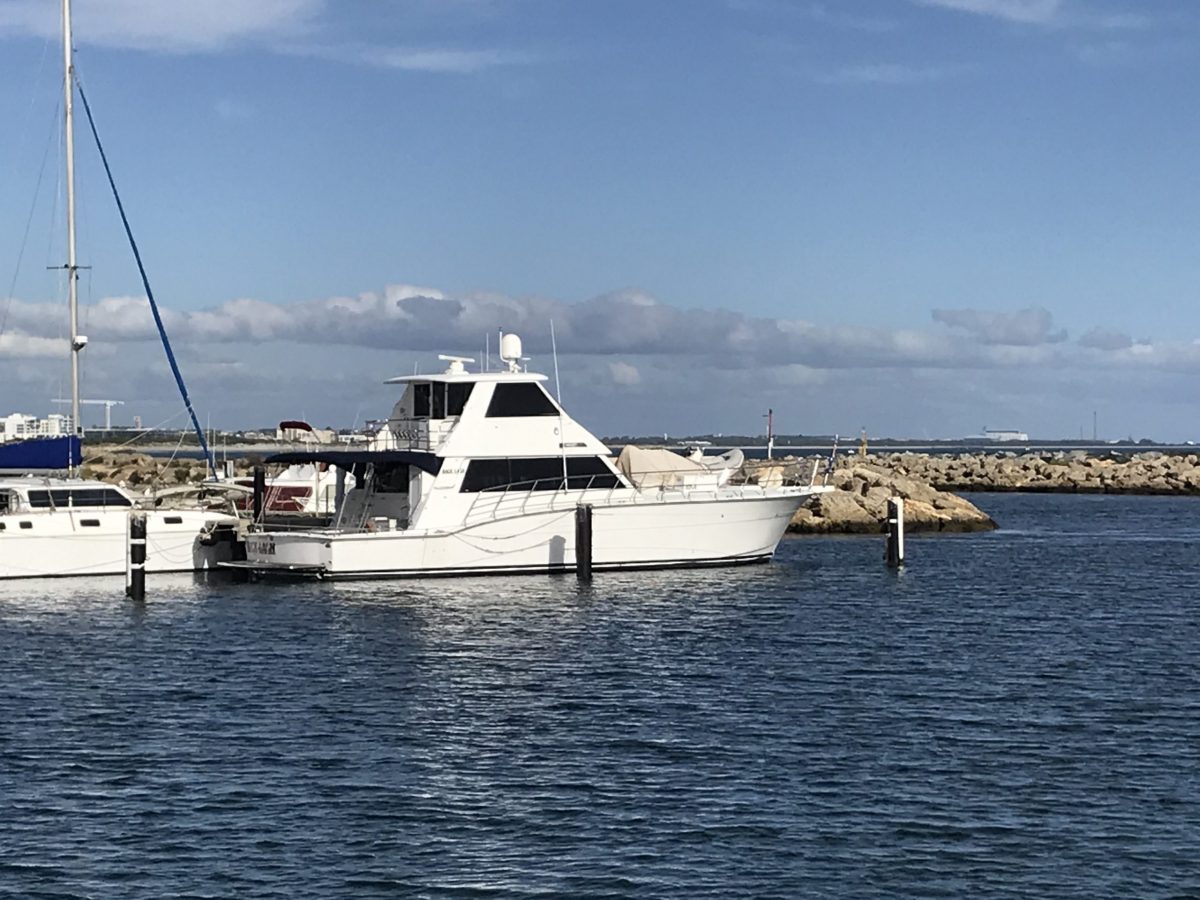 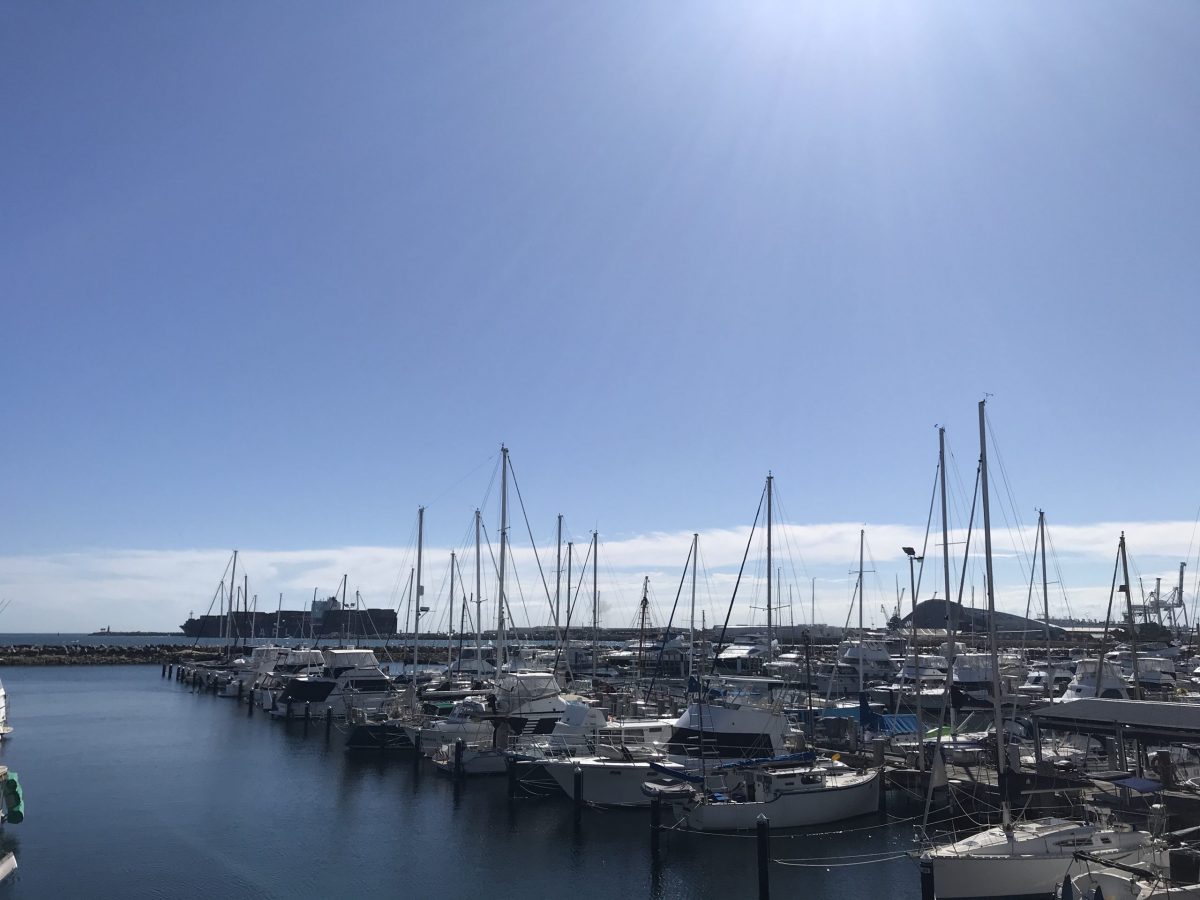 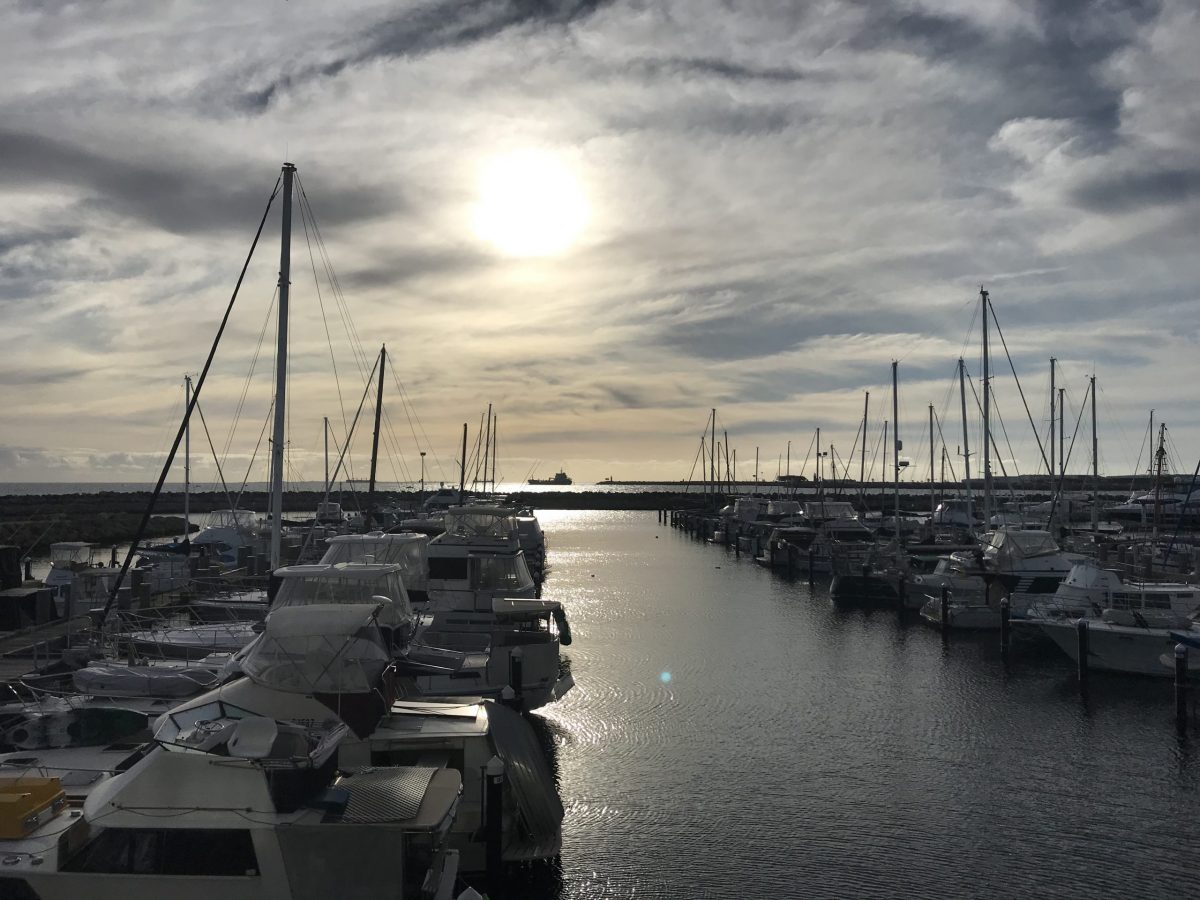 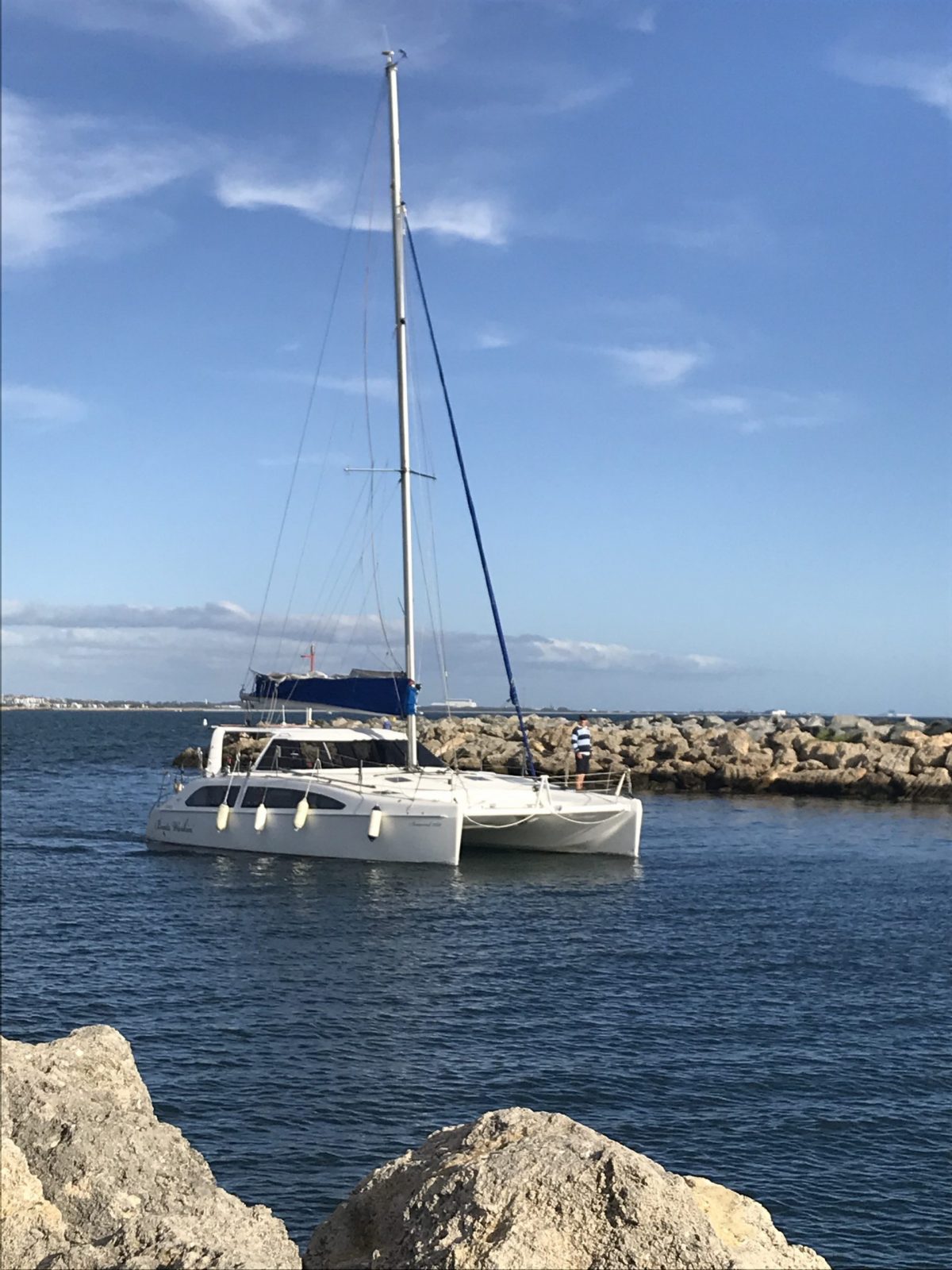 Challenger Harbour includes 64 pens, ranging in size from 10 – 35 metres, three wharves and fuelling facilities. The marina is owned and administered by the Western Australian Department of Transport.

Fremantle Sea Rescue moors their rescue boats in the marina.

Along the jetty are apartments for short-term stays operated by Be. Fremantle. 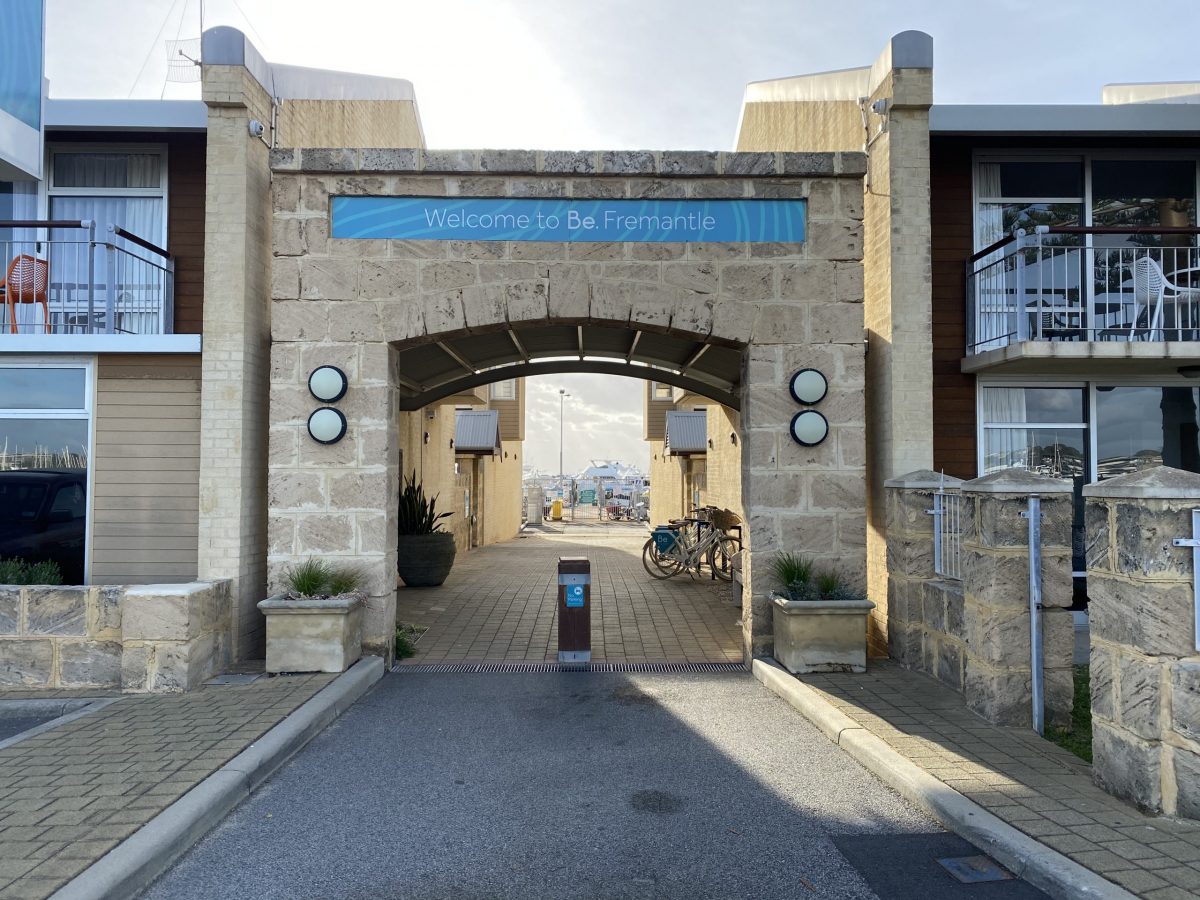 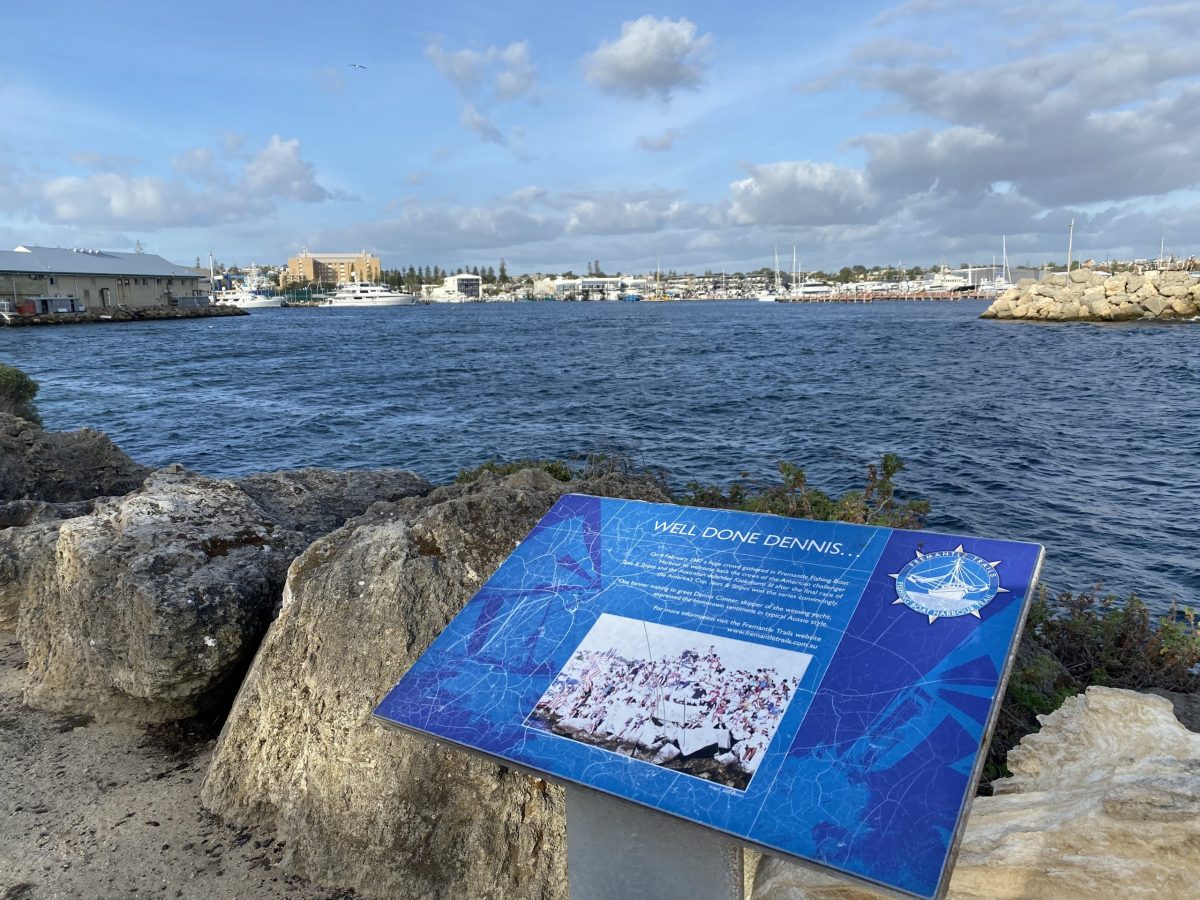 You can say hello to ‘Bella’ – the 150kg bikini-clad bronze sculptures by Greg James – who sits on a bench near the beginning of the groyne near Bather’s Beach. 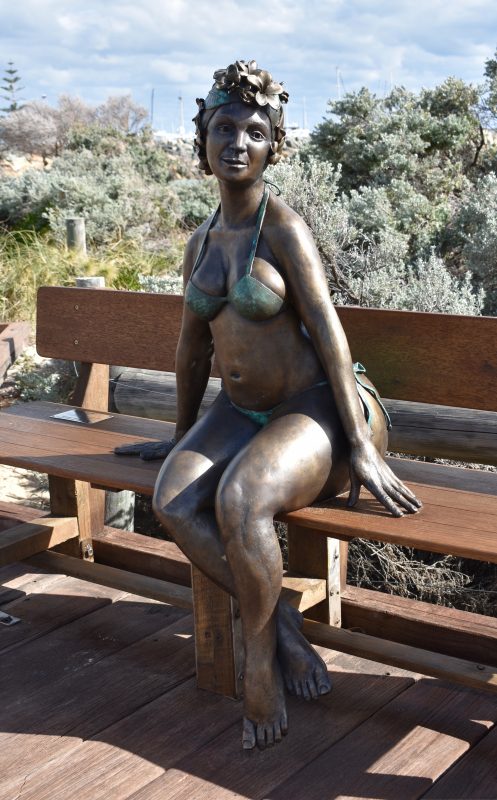 Along Mews Road, stop at the Fremantle Doctor Wind Sculpture – fabricated from an old sea bouy. Tony Jones and Pierre Capponi designed it. 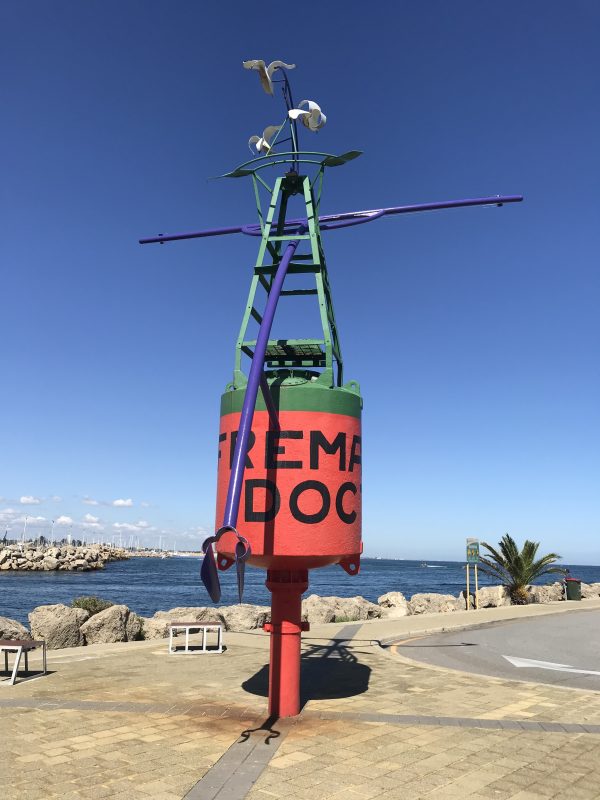 The wind harp responds to the Fremantle Doctor, the summer southwesterly breeze, and the wires sing in the breeze.

At sunset the lighthouses on the Moles flash red and green. There are lots of birdlife, and swans glide around the boats – especially the ones whose owners feed them. Shags show off their underwater ability to catch fish in the shallow clear water. 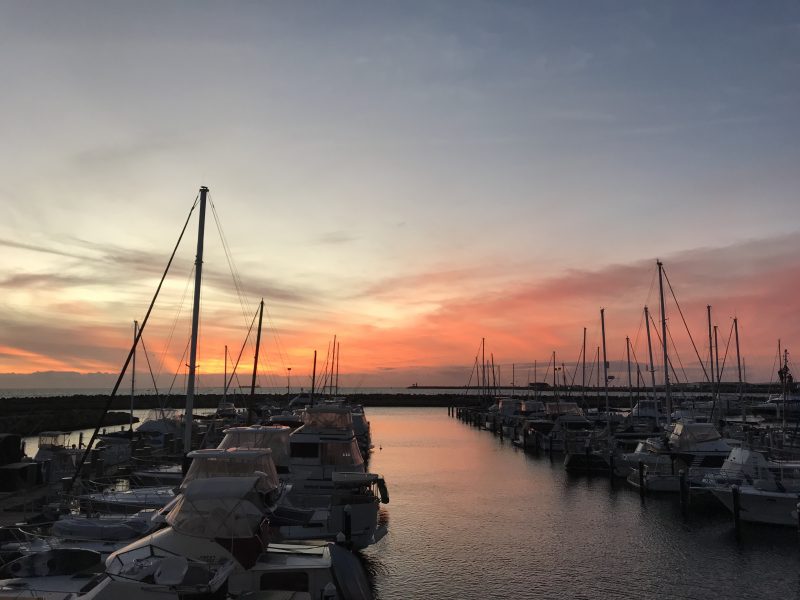 This time of year, autumn, or Djeran, the swallows have arrived. At dusk when the sky turns pink, they appear like magic and perform a magical dance, swooping and skimming the water around the marina.

Wouldn’t it be interesting to live on one of the boats moored in the Harbour to watch all these goings on each day and night?