Home 2021 July 8 Sitting In Fremantle How Do You Make Sense Of Xinjiang?

Sitting In Fremantle How Do You Make Sense Of Xinjiang?

We at the Shipping News believe it’s important to engage more with China and her people in order to foster and maintain a mature relationship at all levels.

In that spirit we will publish stories from time to time on a variety of topics concerning China, and Australia’s dealings with China, and from many different angles.

The province of Xinjiang is often in the news. The fate of the Uyghurs is also regularly discussed in the Western media. This article by Martin Lavička a Czech Republic scholar may assist in understanding some of the issues.

The Uyghurs in Xinjiang are experiencing one of the most intense persecutions in recent times. Despite the nominal legal protection for religious freedom under Chinese laws, the reality is vastly different. Xinjiang is being used as a testing ground for national religious policy by the Chinese government, in addition to being a testing ground for surveillance, governance models, and technologies. 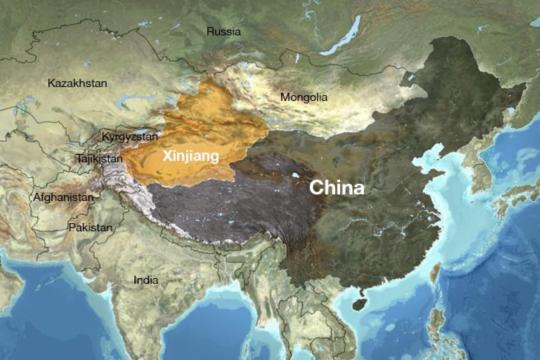 In recent years, international media has shone a spotlight on the human rights violations by the Chinese government in the Xinjiang Uyghur Autonomous Region. These violations include the mass incarceration of the Uyghurs, forced labour, birth controls, and language oppression.

The Chinese government has repeatedly denied that these policies constitute human rights violations. Instead, Beijing claims it is fighting against what it labels as “three evils” (三个势力) of terrorism, religious extremism and separatism. And according to Beijing, Xinjiang is the hotbed of the “three evils”.

Due to the extensive media coverage of Xinjiang, religious freedom and oppression there has become widely discussed internationally (even as such discussions are censored in China). Let’s contextualise what’s happening by looking at the history of religious freedom in the PRC.

After the Cultural Revolution, Chinese citizens again enjoyed limited freedoms of religious belief, as religion per se was no longer criminalized. However, the protection of religious freedoms as stipulated in the Constitution is not more than a “pretend world of official language”, in the words of Sinologist Perry Link.

In fact, the perceived relaxation and liberalisation after the Cultural Revolution was a part of the Party’s strategy to gradually eliminate religions. Document 19, issued in 1982 by the Central Committee of the Chinese Communist Party, explains the official attitude towards religious affairs. It argues that eradicating religion is a lengthy process, but it is attainable after achieving a high level of material wealth, at which point religion will lose its appeal and disappear from the daily lives of people. Document 19 also asserts that speeding up the process with coercive measures would do more harm than good.

The importance of Document 19 was reiterated by Document 6 issued in 1991 by the Central Committee and the State Council. Document 6 led to more constraints and governmental control on religious activities, by calling for “administering religious affairs in accordance with the law” (依法对宗教事务进行管理), which in reality meant increased number of repressive measures towards “illegal and disruptive” religious activities, such as proselytizing and religious fund-raising.

Today, under Xi Jinping, the spirit of Document 19 and Document 6 lives on. For example, many Chinese academics see the principles outlined in these documents as the “foundation of the socialist religious theory with Chinese characteristics” (中国特色社会主义宗教理论的奠基之作).

Both documents aim to centralise and bureaucratise the management of religious affairs and use more coercive measures to manage religion. Vague formulations of many legal provisions give the local authorities the power to interpret them at their discretion.

Both documents criminalise religious practices in the name of fighting the “three evils”, thereby gradually uprooting religion from peoples’ everyday life. The Xinjiang regulations go further by banning minors from religious activity sites and from religious home-schooling. They also attempt to isolate religious groups from foreign influences and funding.

The current hard-line religious policies under Xi Jinping don’t deviate from the long-term Party objectives set in the 1980s. What is different is the intensity and political determination to speed up the process and reach the final goal. The so-called “patient persistence in Party policies of co-optation and control” is no longer Beijing’s strategy towards the religious in China.

The reasons behind this change of tactics might relate to the legitimacy of the Communist Party of China and its emptied ideology, the slowing of economic growth, and increased social instability. There might also be more symbolic reasons, such as the 100th anniversary of the founding of the Communist Party of China and the goal of Xi Jinping to achieve what his predecessors did not: the homogenised Chinese Nation run by “staunch Marxist atheists” (坚定的马克思主义无神论者).

* This article was written by Martin Lavička a Lecturer at the Department of Asian Studies, Palacký University Olomouc, Czech Republic, where he teaches modern Chinese history and Chinese politics and is republished under a Creative Commons Licence. The original article may be found here on The China Story blog.