The Round House John Gavin Writing Competition prize winners have just been announced.

Don’t miss our article with all the details about John Gavin, and the adze, and the Awards Event on 26 June on the Round House lawns.

The First Prize for Flash Fiction went to Jean Hudson, a regular contributor to Fremantle Shipping News, for her entry ‘Adze’, the agricultural implement that led to Gavin’s downfall.

Jane Pollard, numb with grief, wished she could turn back the clock. Why had they moved to the Swan River Colony? Why had they employed Johnny Gavin, a Parkhurst apprentice and allowed him to live in their home? Why had God forsaken them?

In the kitchen, the blue and white Willow Patterned dinner service mocked her from the dresser. It had belonged to her mother. Before leaving England, she carefully wrapped each piece in newspaper and packed them in a tea chest for the voyage to Australia. She considered them ‘too good’ to use. She scolded Johnny Gavin once for using a cup – was this why he hated her so? The unused crockery sat gathering dust and was a constant reminder of a life in another place – a life she could never return too.

In a fit of rage, Jane hurled a cracked and tea stained cup at the wall – it smashed into shards, then another and other, followed by saucers and plates, until none remained. In the outside tool shed she found a sack for the broken crockery. 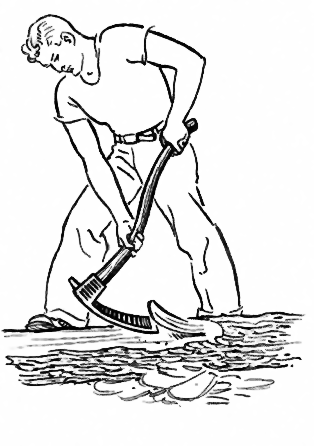 The adze used by Johnny Gavin lay on the workbench; its blade sharp and menacing in the sunlight. She remembered it matted with George’s hair and brains. Her husband must have cleaned it – surely he didn’t plan on using it again. With trembling hands, she carried it into the house.

Jane swung the adze again and again onto George’s bed frame. Wood splintered under the blade. Her bonnet fell to the ground; her hair came undone. She looked out the window at the smoldering pyre in the paddock. Earlier she had pulled the blood soaked mattress outside and set fire to it, along with his pillow and bedding. The stench of burning horsehair and human gore was nauseating. She carried the broken bed planks outside and added them to the fire.
Less than a week ago, Johnny Gavin murdered her son George while he slept peacefully. Afterwards, she washed George’s battered body; then they buried him under a gum tree, a handmade wooden cross now marked the spot.

Jane placed the adze into the sack along with the broken crockery and staggered outside. Black clouds massed above the horizon, the air was heavy and still. She carried the bag to the river and sat with her back against a rock. She looked at the sky, now lit by flares of lightning followed by explosive booms of thunder. She hadn’t eaten for days and felt weak.
Her body grew stiff in the cold. Jane clambered over rocks and branches to the water’s edge. She looked at the surging water and stepped in. The river dragged at her skirts and cloak. She heaved the hessian sack onto her shoulders. The water was at her thighs, then her waist. All she had to do was take one more step and ease her body into deeper water; the sack would weigh her down – like the murderer, Johnny Gavin was weighed down.

Jane had watched and felt nothing when they hung fifteen-year-old Johnny Gavin outside the Round House in Fremantle. She stood still as he fell from the gallows, chains hanging from his feet as the prison bell tolled. The trial was a blur; under oath, she answered questions about Johnny Gavin and the day of her son’s murder.

She remembered how she had cradled George’s mangled head in her hands. George, her eldest son, her favorite, the baby she had held and suckled at her breast. She remembered tying Johnny’s hands together and sending for help.

Jane stood in the surging water about to take one final step, a step to oblivion, to a place without heartache. She heard a voice calling ‘Ma, where are you?’. Jane took a step back, then another and hurled the sack into the water. The adze was gone. She fell onto the ground and breathed the dirt and the earth that held her body.

Turning her head from the river, rain in her eyes, she saw a boy running towards her. For a split second she thought it was Johnny Gavin – it was Michael her youngest son.