The jury perhaps is still out.  Some will like the outcome, some will not. We are talking about the restoration of what is now the home of the Mediterranean Shipping Company at the corner of Cliff and Phillimore Streets, Fremantle, incorporating the bold steel and glass ‘installation’ facing Cliff Street.

The new building serves as the entrance to the combined, old and new composite structures, and will be something of a talking point for a time to come.  If it weren’t attached to the heritage ‘sibling’, and didn’t form part of it, but stood alone in some other precinct, it would probably be considered less unusual, perhaps even uninteresting.

One suspects a poll of opinions of passers-by will beg to differ over the design attributes of the new, whether such a construction should be permitted in a heritage zone, and whether, in any event, the new addition could have been more sympathetic to the old. There can be no denying however that the new, blended with the old, adds interest, is something of a statement, adds to the urban fabric, and is likely to make the MSC’s home at Cliff and Phillimore a Fremantle destination in its own right. Even if it is just to see what the fuss is all about.

As to the redevelopment, and more about MSC, you can see Pia Smith’s article here. 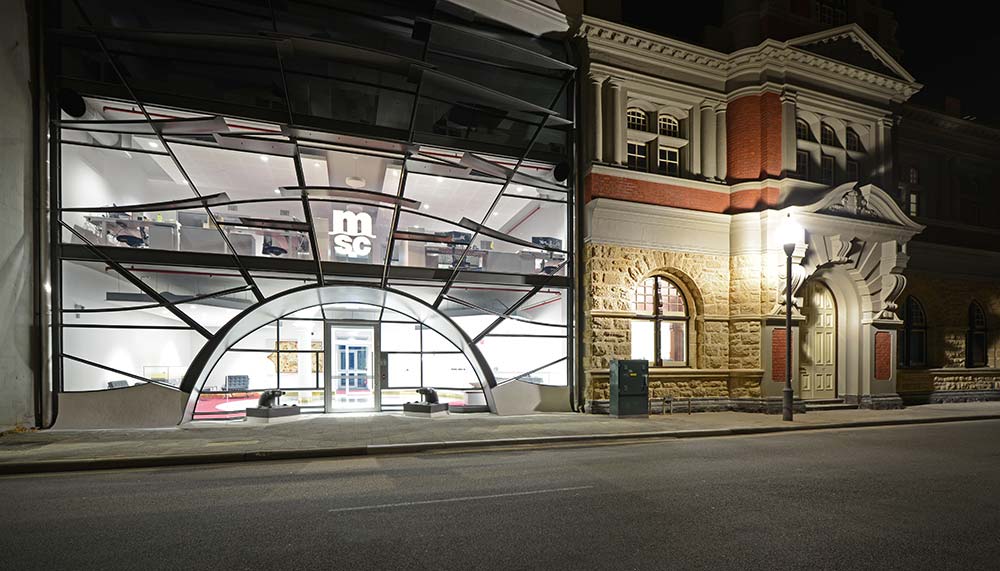 The electronic advertising hoarding backed on to the old scoreboard just inside the Parry Street vehicle entrance to the Oval and South Fremantle Football Club rooms, is an eye-sore of a superior sort.

How it came to be there, and why it should be permitted to remain, is a question that requires a serious answer. The signage has nothing to do with football. Day and night, it is garish.

Such a large, loud, very visible, very bright advertising sign has no place in the centre of Fremantle, adjacent to so many significant Fremantle heritage structures, including the Fremantle Oval, grandstand and scoreboard, the Fremantle Markets, the adjacent Old Synagogue, and the Warders Cottages over the road on Parry Street and in Henderson Street. 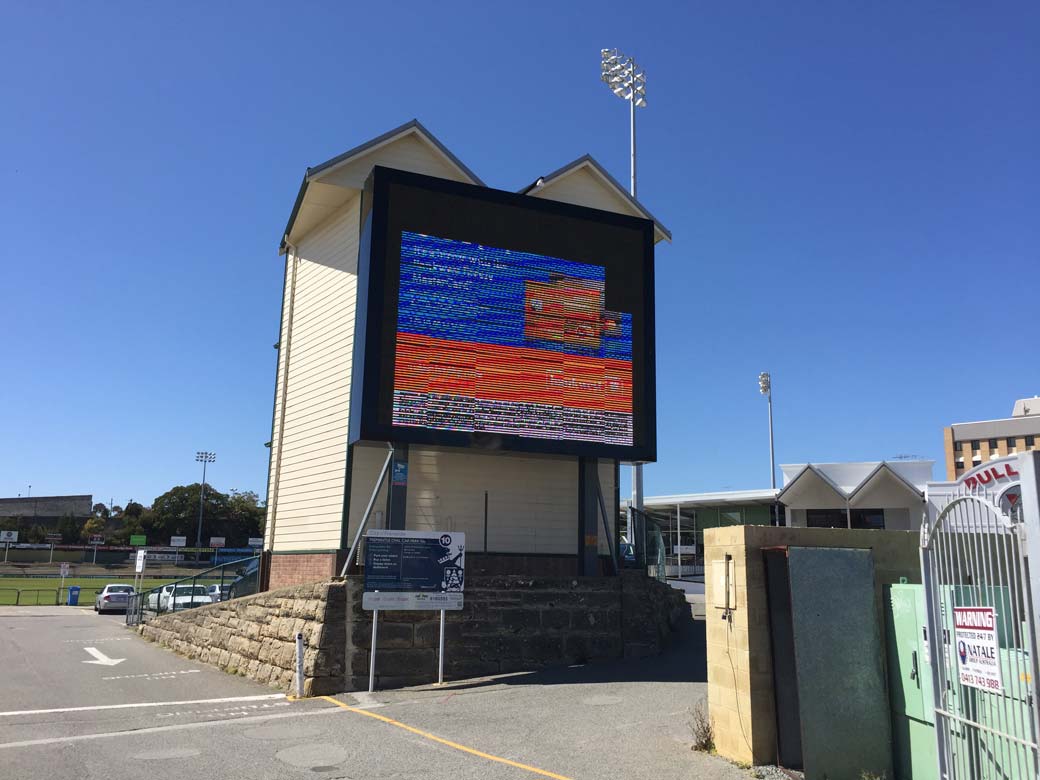 What exactly is going on with this long-fenced-off, apparently derelict space at the corner of South Terrace and Suffolk Street, Fremantle?  The signage wrapped around its perimeter proclaimed it to be the site of a forthcoming medical centre, but after proclaiming this for a long time, with no sight of a sod being turned into a doctors’ abode, a For Sale notice now sits above the medical centre signage.

An inquiry of the Fremantle City Council indicates the site developers made multiple applications for extensions to the medical centre planning approvals, initially granted in 2010. With the Fremantle Hospital in apparent decline in recent years, one can see how Fremantle residents might have welcomed such a land use. With the lot now for sale, however, we can reasonably surmise that the signage which remains in place is misleading and no such use is necessarily imminent.

So, just what is the future of this site? 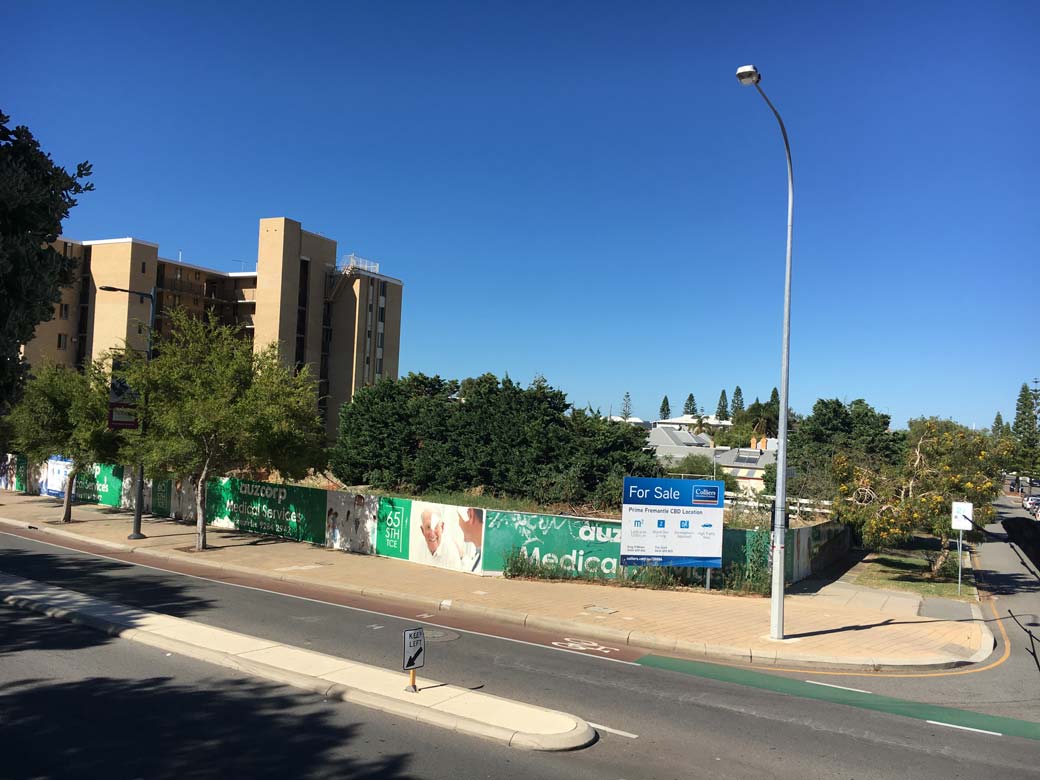 Our story above about the vacant South Terrace/Suffolk St site leads to another question: Should the owners/developers of vacant sites be required to landscape them as community green spaces pending actual development?

A condition attached to development approvals involving demolition that results in empty lots, could require their greening for community use as a local park if the development of the cleared site does not occur within, say, six months of the grant of planning approval.

Derelict sites, or sites that look for all the world as though no-one cares a jot about them, are a blight on the urban landscape and neighbourhood amenity.

The City of Perth has succeeded in achieving similar outcomes in the past.

Owners/developers, with support from the City, should be encouraged to think more broadly about their obligations to the community in which they hold land and whose support and trust they will wish to enlist when their sites are eventually developed.