Bringing the Mediterranean to Fremantle

Picture the scene: It’s 1675, in the gulf of Naples, and the wooden felucca boat Giovannina is plying trade from Naples to Castellamare, from Calabria to Sicily. This is the beginning of the Aponte family’s long relationship with sea trade – one which continues to evolve to this very day.

Picture another scene: It’s 1834, and young Canadian Frederick Dalgety disembarks ship in Sydney to become an apprentice clerk. The pastoral and shipping business he went on to establish – Dalgety & Company – became one of the most important in Australia.

In 2016, unexpectedly, these two stories intersect in Fremantle – to be exact, at 11 Cliff St.

In 1900, with Fremantle’s new harbour recently opened, Dalgety & Company bought land on Cliff St, at the ‘front door’ of the State.

How fitting that the building Dalgety’s company commissioned is now the Australia and New Zealand headquarters of the Mediterranean Shipping Company (MSC) –the world’s largest privately owned shipping line, and founded in 1970 by Gianluigi Aponte, with the purchase of a single ship.

It underwent a massive redevelopment over a period of five years, a combination of meticulous heritage restoration and a striking modern addition. At the end of 2016 the building, in all its glory post-facelift, was unveiled – a beautifully realised combination of heritage and the new.

How you perceive it depends on your approach. If you are heading to Cliff Street from the Maritime Museum or E-Shed, you’ll see one of the West End’s most significant heritage buildings, paint removed from the layers of stonework (bluestone from Melbourne and limestone from Cottesloe), arched windows and green metal dome gleaming. If, however, you’re ambling north up Cliff Street, you may be stopped in your tracks by the new atrium added to the building – a multi-level expanse of ribbed glass, metal spines fanning like a rising sun, panes reflecting the historic buildings opposite.

And who are its occupants? Shipping containers are a regular sight in Fremantle, on trucks, at the Port or sailing out to the horizon stacked high on a ship. But what’s in them? Where are they going?

Fremantle Shipping News spoke with MSC staff members Raquel Gonzalez and James Granville to find out more about the company.

‘Container shipping is one of those hidden industries that nobody really sees, but it plays such an important role in everyday life,’ says Granville.

‘We transport anything that can fit in a container! Grain, metals, wine, frozen and chilled meat, oranges…’

On their ships, MSC exports WA produce out of Fremantle and directly into international markets.

‘We can take Australian produce – meat, wine, vegetables, fruits – which we believe to be some of the best in the world, and get it quickly to international markets in perfect condition.’

MSC imports goods too, from Mexican beer, to furniture, to apples from America, to perhaps the shirt on your back – many of the goods we rely on in everyday life come to our WA stores via Fremantle Port on an MSC ship.

While 7000 containers might seem quite a few, some global MSC vessels can carry up to 20000 TEU, but these can’t come to Australia or New Zealand due to landside infrastructure restrictions. The ships are simply too big.

Fremantle is a significant site for MSC. It became the Australia and New Zealand Headquarters 17 years ago, due to it being both an important Australian Port, and on a time zone compatible with MSC’s head office in Geneva.

‘The company was originally small, here in Australia, and based in the East,’ explains Gonzalez.

‘As we grew, we realised the time difference was an issue and saw an opportunity to have a bigger office here in Freo and bring all our national functions here.

‘The easier connection with Geneva was a major factor – we are in constant communication.’

As the company evolved from a staff of just 20, to a workforce of over 120, they outgrew their North Fremantle building, and began the search for a new home.

As Gonzalez explains, ‘we could have built a new building somewhere outside Fremantle, but we wanted to be here, close to the Port.

‘Not a lot of real estate comes up in this area, but by chance, one of the directors saw one day that this building was for sale.’

A feasibility analysis study showed that all the staff wouldn’t fit in the heritage building alone, but the idea grew to create a new, linked, building, using the empty lot next door.

‘We wanted linked buildings so there was a unified feeling between everybody.’

Slavin Architects put forward the suggestion that rather than imitate what was there, they would create a simple glass façade, pushed back from the street to give prominence to the heritage buildings.

The fins on the façade radiate outwards to reference the arches in the heritage building. 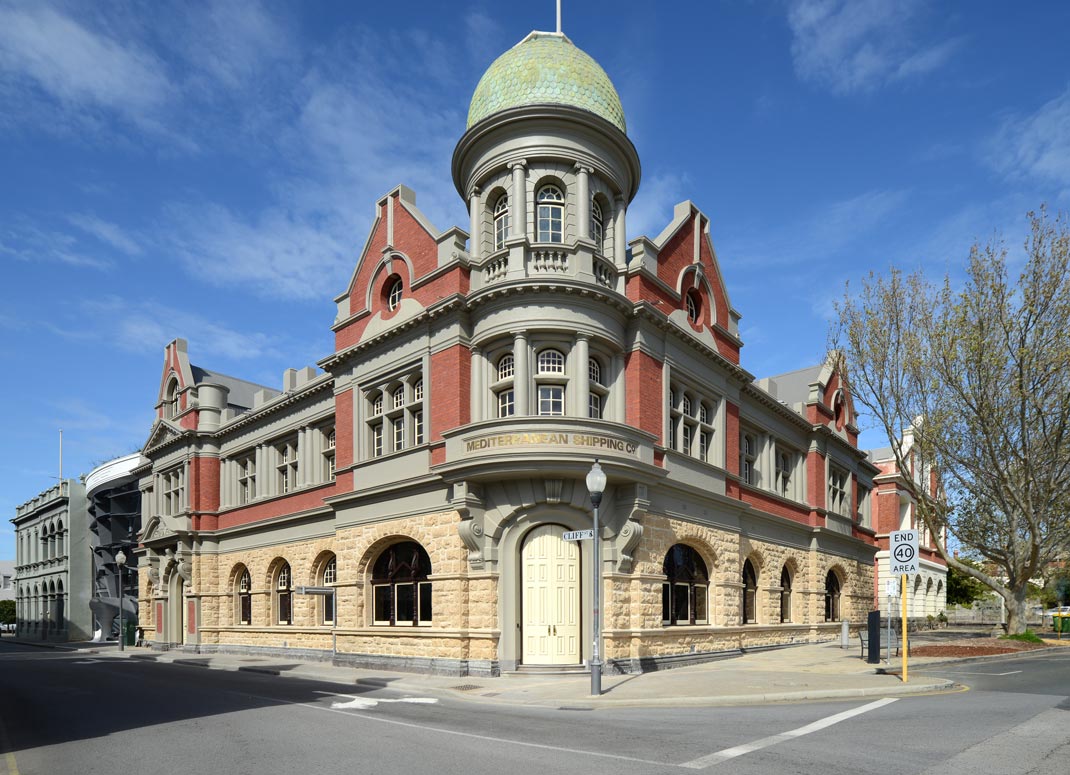 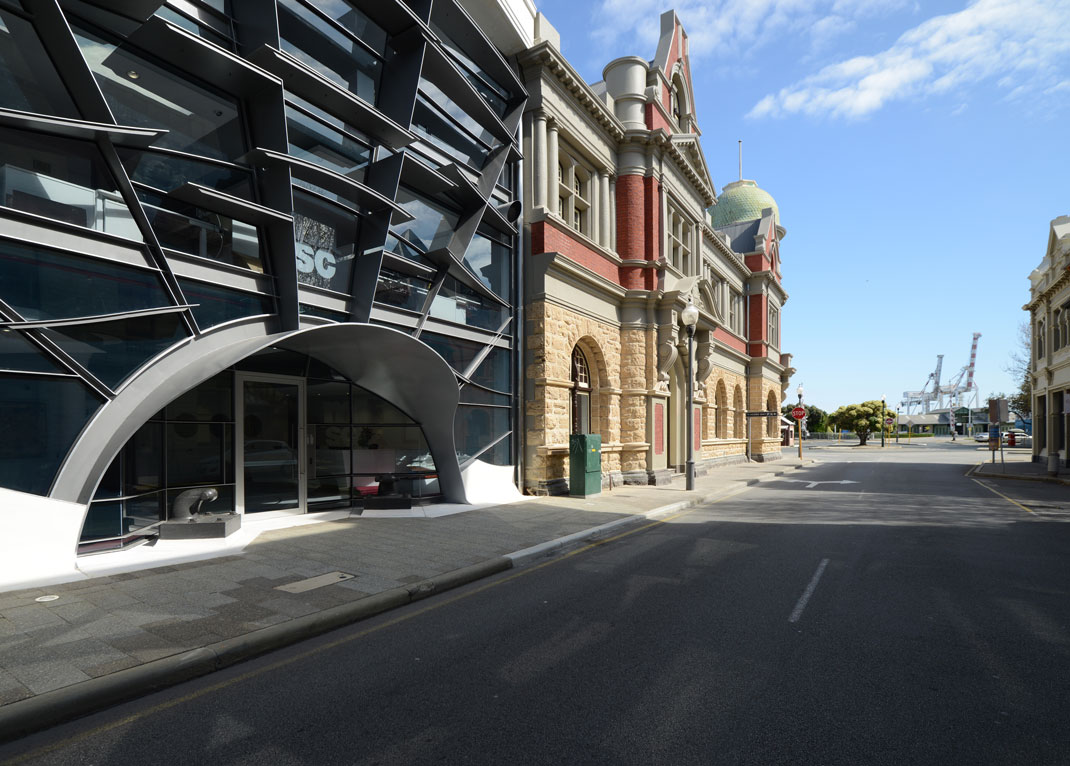 The new and the old: view along Cliff St
Photo: Yerbury Press 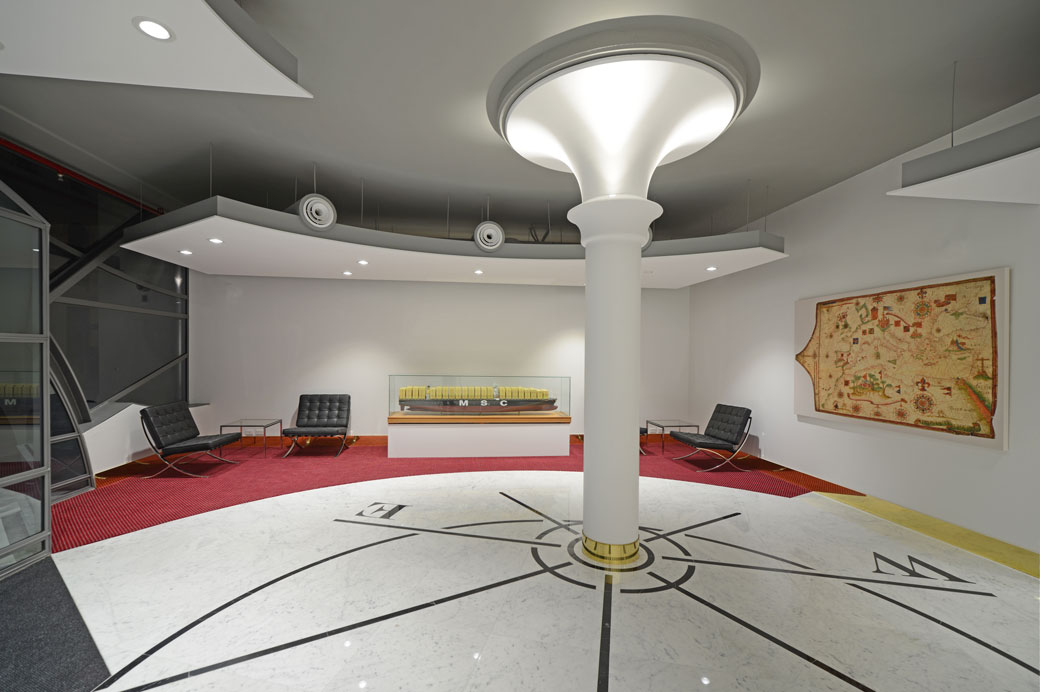 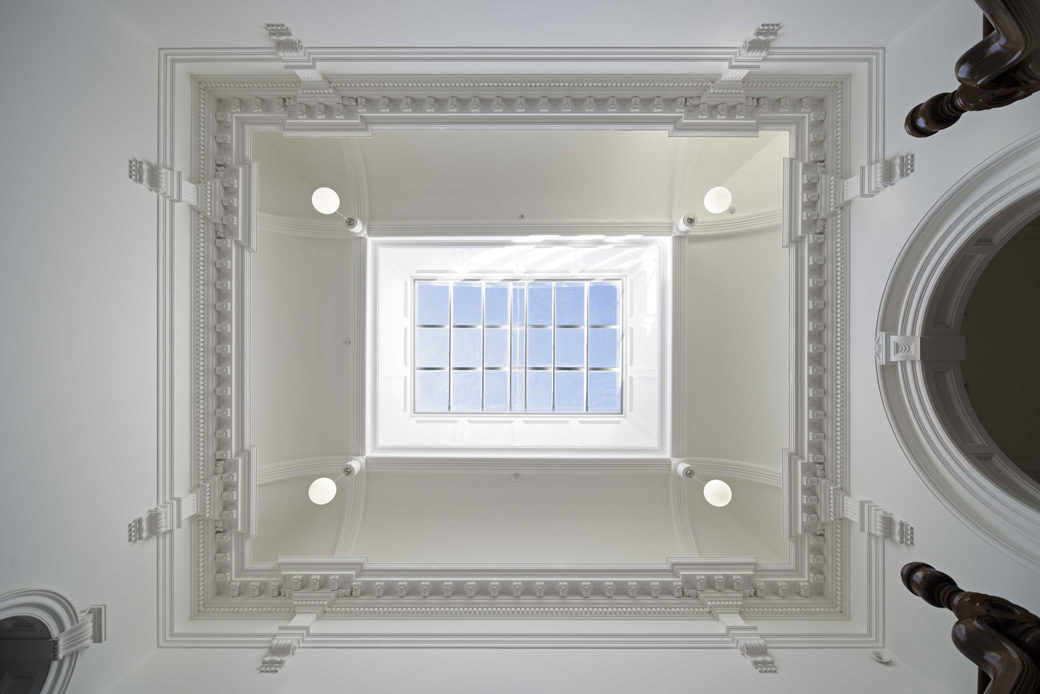 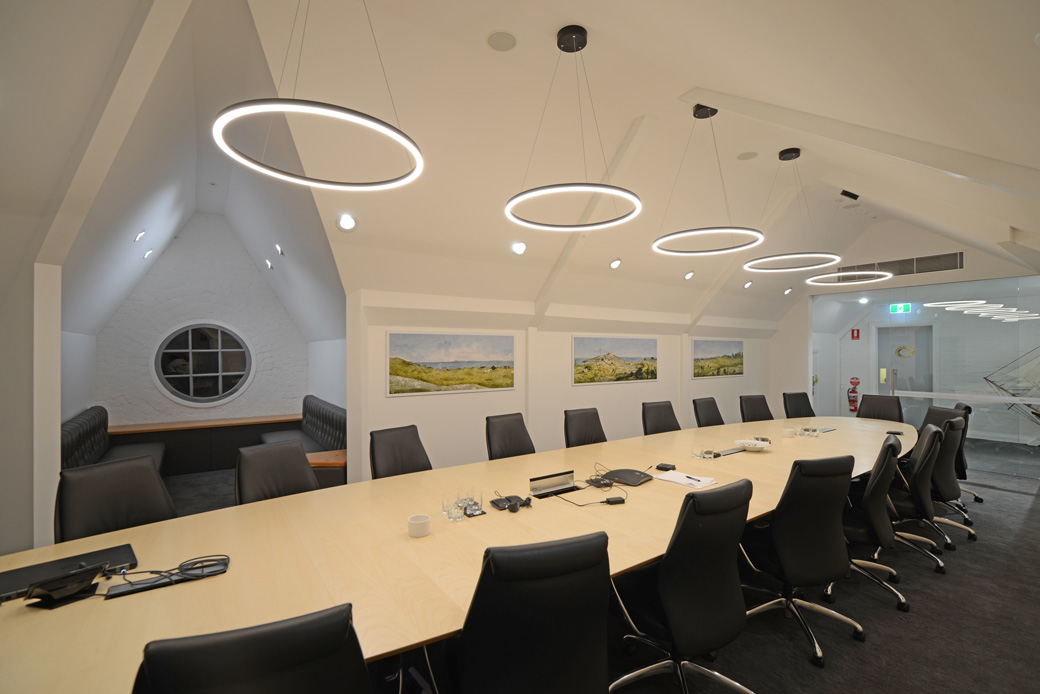 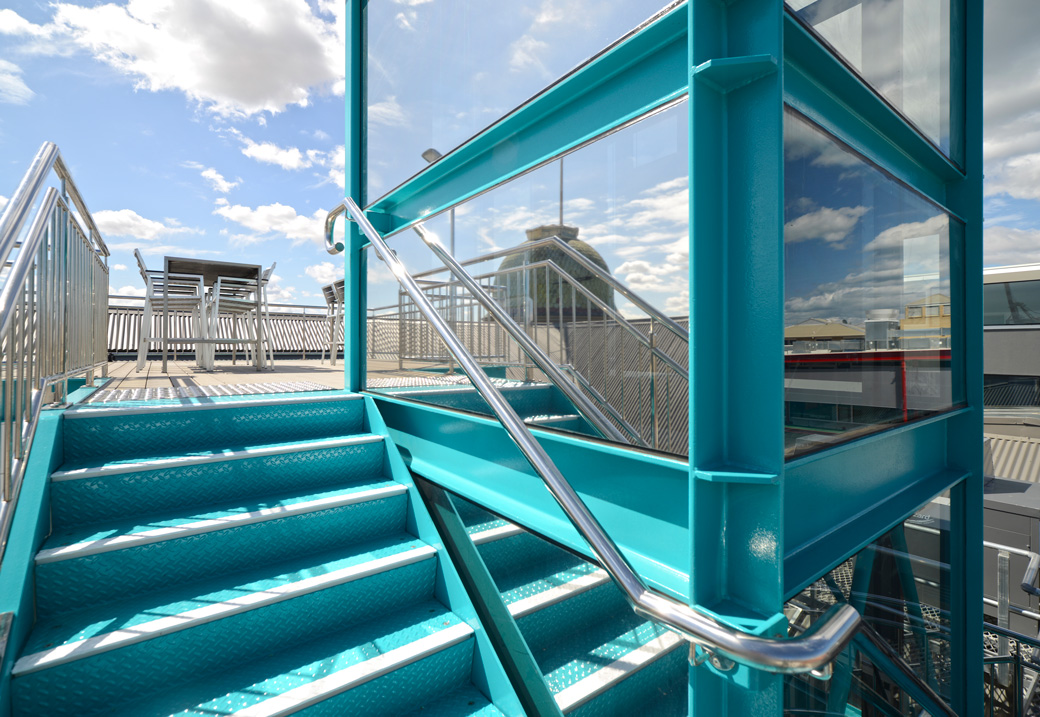 According to Gonzalez, while a small number of local residents weren’t keen on a different style of architecture in the heritage-listed area, many were excited that something was finally going to be done with the building, which had been occupied by multiple tenants but with no real plan for its care.

Entering the building, these same ideas of linking the past with the present – while honouring both – are clear. The reception area is bright and modern, featuring a giant compass design on the floor, alongside replicas of MSC’s container and cruise ships.

Stepping from the ‘new’ into the ‘old’ building, the attention to detail in restoring the heritage detail is outstanding. A grand staircase sweeps upward towards an atrium that floods the interior with light.

Embellishments, plasterwork and pressed metal ceilings feature throughout. A modern glass lift shaft slices up to an open skydeck with panoramic views.

There are also nods to previous occupants and the building’s history. An entire corridor pays tribute to the original architect, J. J. Talbot Hobbs. There are old vaults, from when it was a bank, and a siren at the top of the stairs is a reminder that the US Navy commissioned the building in World War Two as a base.

Ed Janes, an architect and furniture maker with a long association with Fremantle, was brought in by Slavin Architects to design the interior fittings.

Janes was responsible for sourcing the artwork. It is certainly worth a closer look.

Janes worked with an art consultant to commission paintings by Nyoongar artists for the main hallways. Giant reproductions of Mediterranean shipping maps hark back to the Aponte family’s maritime beginnings.

The upstairs boardroom – created by transforming a pigeon-filled attic – features reproductions of watercolours by Jane Eliza Currie, one of WA’s earliest watercolourists. The Oregon beams from the attic roof were repurposed into furniture throughout the building, and the boardroom features a porthole window with a view out towards the dock.

Janes also encouraged MSC staff to contribute design ideas and artwork, and there are around 15 works by staff featured, as well as a ‘funky’ staff canteen that used suggestions and design choices from employees, including Raquel Gonzalez.

Perhaps it is gestures like these that have encouraged the staff to take such ownership of the building.

‘From a staff perspective it’s been a really nice change’ says Gonzalez.

‘We had a lovely view from our old location, but we were isolated. Being right in Fremantle and walking out for lunch to cafes, there’s a camaraderie that’s started up among the staff, with Friday night drinks, people going out together after work. It’s really nice to see that coming back.’

This has also given the west end a boost, according to Granville.

‘It’s good for the local businesses as well – 125 people charge out the door at lunchtime and go to a local coffee shop or get something to eat.’

This new national headquarters represents a significant investment from MSC. The restoration and build took five years, and cost $14.5 million.

‘It’s a credit to MSC that they took the time and resources to do this job properly,’ says Ed Janes.

‘They did a smoking ceremony before the office opened. Their office in Geneva is very proud of this building.’

The GFC was traumatic for the container industry, but the MSC weathered the storm and is now preparing for growth.

‘We have invested heavily in bigger ships to accommodate the growth in worldwide trade,’ says Granville, ‘but these new ships are more environmentally friendly – they run on less fuel and create fewer emissions. We see this as part of our Corporate Social Responsibility.’

With their cruise ship division (based in Sydney) experiencing exponential growth, MSC is experiencing renewed confidence about the future.

Fremantle is a town of seafaring stories, of migrants and merchants, sailing and shipping.

It’s also a thriving contemporary port city, and its rich history is kept alive in no small part because of the preservation of its built environment

The ‘Dalgety Building’ was originally home to a shipping company, and has been several times since, when it was Elders House and Wilhelmsen House.

How fitting that MSC have made their Australian home at 11 Cliff Street.

Pia Smith is a Fremantle-based writer, editor and researcher