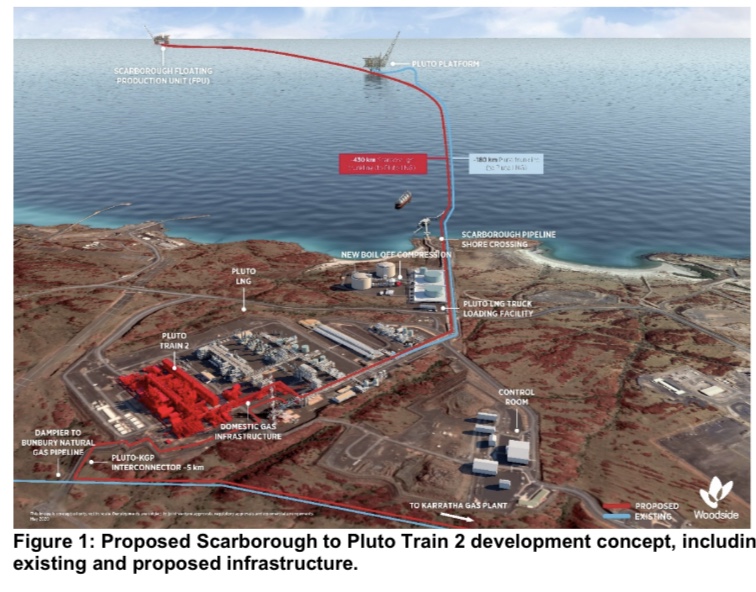 The Albanese government has this week thrown its support behind what’ll be one of Australia’s most polluting developments: the Scarborough-Pluto gas project in Western Australia.

We calculate that the emissions from this project and all of its related activities will add about 41 megatonnes per year to Australia’s national emissions by 2030. That is a materially relevant number – it’s nearly 7% of our emissions in 2005, which is the year we use as a baseline for emissions targets.

To put it another way, it’s nearly twice as much as the emissions avoided by all the rooftop solar panels in Australia each year.

It comes as the new minister for climate and energy Chris Bowen yesterday reiterated his commitment to Labor’s 2030 climate target of reducing Australia’s emissions by 43% on 2005 levels.

But as Bowen doubled down on this vow, the new resources minister, Madeleine King, was reassuring the gas giants their climate-wrecking projects were here to stay.

Ours was the first study that put together the total greenhouse gas implications of the entire Scarborough-Pluto project.

The project is made up of the Scarborough gasfield (located offshore) and the Pluto processing plant (on land).

Woodside Energy projects the offshore Scarborough gasfield expansion will release 878 megatonnes of carbon dioxide equivalent over its lifetime. This projection is derived from its federal government approval assessment.

But this doesn’t tell the full story. State government approvals looked at emissions from the entire project, including the Pluto processing plant and its extension.

We put state and federal numbers together for the first time to find emissions for the whole Scarborough-Pluto project would be nearly 60% larger than Woodside’s reported projections for Scarborough alone.

In a statement to The Conversation, a Woodside Energy spokesperson said its “data is in accepted regulatory approval documents”, which notes that a Environmental Resources Management study from 2020 examined the emissions intensity of Scarborough gas, processed through Pluto, and then used to generate electricity in selected markets.

Our own work, along with a CSIRO report for Woodside, debunks the argument that LNG from this project will reduce emissions globally. The bottom line is that adding the amount of LNG planned from this project is likely to slow down decarbonization in key markets and add significantly to global emissions.

Woodside’s Scarborough-Pluto project is just one of many fossil fuel projects in the pipeline. Overall there are 114.

We added up the emissions of 46 liquefied natural gas and coal mines officially classified as “new projects” by the federal government. By 2030 these would add at least 8-10% to Australia’s projected emissions for 2030.

Including the Scarborough-Pluto project and all its related activities in this mix would add 15-17% to Australia’s 2030 emissions.

It’s difficult to see how Labor can both embrace the gas industry and reduce emissions to its target of 43% by 2030. It could try using controversial carbon offset schemes, but this wouldn’t go down well with the public nor with Labor’s emphasis on restoring integrity and trust in government.

While Australia’s domestic emissions account for 2% of global emissions, we calculate that adding emissions from our fossil fuel exports would increase our total greenhouse gas footprint to around 4-5% of global emissions. And those exports, thanks to the gas (and coal) industry, look set to balloon.

It’s clear the Scarborough-Pluto project is not compatible with the goal of limiting global temperature rise to 1.5℃ this century.

Last year the International Energy Agency (IEA) released a roadmap for bringing global emissions to net zero. It found gas use would need to depend on a large roll-out of carbon capture and storage technologies: 14% of total energy supplied by gas would be captured and stored in 2040, increasing to 30% by 2050.

But carbon capture and storage is flawed. WA’s Gorgon gas project’s attempt at using the technology is testament to that. Gorgon has blown its budget and fallen short of its targets by around 50%.

It should be noted there are no current or proposed plans to utilise carbon capture and storage for Scarborough.

The Woodside spokesperson says IEA modelling shows there’s an important role for oil, gas and hydrogen in the world’s future.

Woodside argues that in the IEA’s net zero emissions scenario, the forecast cumulative global investment in oil and gas needed to meet the world’s energy needs is approximately US$10 trillion by 2050. But this obscures the fact new and additional fossil fuel infrastructure at the scale of Scarborough-Pluto expansions is not consistent with net zero emissions.

The IEA modelling also shows a rapid decline of demand for gas over the next five to ten years. Its net zero roadmap projects the potential for a rapid collapse in Australia’s major liquefied natural gas markets (South Korea, Japan, China) by the mid-2020s, as they implement Paris compatible climate targets.

Russia’s invasion of Ukraine has forced the whole world to rethink its relationship with gas, as prices rise here and overseas largely due to sanctions on Russia’s supply.

Woodside claims the shift away from Russian energy sources strengthens the case for Browse – a proposed A$30 billion gas development north of Broome, WA. But phasing out gas, in fact all fossil fuels, is not only a climate question. It is a security matter.

We must fully embrace renewables

Those who will now fully embrace renewables as a way to ensure energy independence will also be at the forefront of the inevitable global energy transformation, gaining competitive advantage.

And Australia, with such vast renewables resources, could be a world leader in green hydrogen exports.

Gas simply has no place in the fight to stop global warming beyond 1.5℃ this century. The big question is whether the Albanese government, if it wants to be taken seriously on climate change, will take that on board.

Right now, given the high-profile intervention from the resources minister providing “absolute” support for Woodside and gas developments, the jury unfortunately is well and truly out.