Wilder at Heart – The German Film Festival Is Underway

Every now and then you come across a movie premise so delicious, so wonderfully provocative, so full of promise of twists and turns you can’t believe it hasn’t been made before (especially by Hollywood, which burns through ideas like firewood).

I went looking but I could not find a precedent for Michael Kreihsl’s Risk and Side Effects, a comedy about a narcissistic architect named Arnold (Samuel Finzi) who in the middle of a grand, ego-boosting project is told by his wife Kathrin (Inka Friedrich) that she needs a new kidney and she expects him to do the honours. 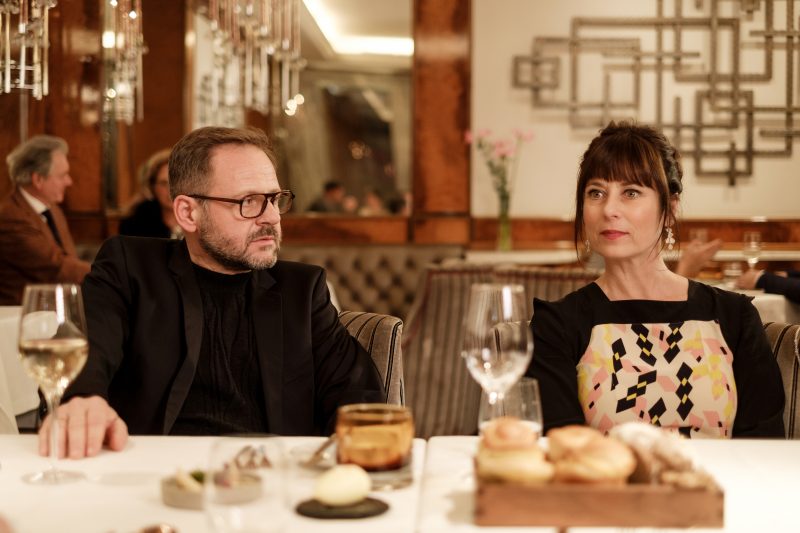 Risks and Side Effects

Arnold throws his arms around Kathrin and is full of empathy for her medical crisis. However, when he ponders on offering up a kidney and the disruption it will cause to the erection of his phallus-shaped skyscraper (yes, there are a few dick jokes) Arnold hesitates and searches for alternatives, such as the illegal organ trade.

Further pressure is put on Arnold when his gormless best friend Gotz (Thomas Mraz) offers a kidney to Kathrin. Arnold doesn’t want to be shown up by Gotz, who seems happy to give a kidney to anyone who asks, but neither does he want to lose a willing donor.

Risks and Side Effects, which is one of two Austrian films at this year’s German Film Festival, is at its best in those scenes in which Arnold argues his way out of his marital obligation, frantically reaching around for convincing reasons not to give his wife a kidney.

Arnold’s selfishness and the pathetic nature of his excuses pushes Risks and Side Effects into the terrain of Seinfeld and Curb Your Enthusiasm, in which we laugh at the unheroic hero for his lack of basic human decency but recognise the quality in ourselves (how many of us would hesitate if asked to donate a kidney?).

While Risks and Side Effects does not live up to its promise – the film needed to drill down deeper into the relationship between Arnold and Kathrin instead of piling on irrelevant infidelity subplots – it’s pleasing to see a smart, funny dissection of the heartlessness bourgeois striving that evokes the work of an earlier Austrian satirist, Billy Wilder.

The spirit of Wilder infuses another highlight of the German Film Festival, Leander Haussmann’s A Stasi Comedy. Set in East Berlin in the early 1980s, A Stasi Comedy is about a communist operative named Ludger (David Kross) who is assigned to infiltrate the Prenzlauer Berg district, the home to bohemians and artists and free-thinkers. Eventually, he comes to live a double life – one as an underground poet and one as a Stasi agent.

“Fans of the Oscar-winning The Lives of Others, with its detailed depiction of the Stasi’s cruel methods, will be disappointed if they are expecting something similar. This film’s main purpose is to entertain, and Haussmann uses farce and slapstick, with strong performances from the talented cast helping to propel its off-beat drama,” says the Australian Book Review.

This year’s German Film Festival also has a terrific retrospective section, with classics from each of the past five decades. From the 1970s there is Volker Schlondorff’s searing adaptation of Gunter Grass’ The Tin Drum; and from the 1990s there’s Tom Tykwer’s breakneck thriller Run Lola Run that launched a thousand TV commercials; and there’s the touching and funny Good Bye, Lenin!, in which a fresh-faced Daniel Bruhl (Ford vs Ferrari) plays a devoted son who decides to protect his mother from the reality of the collapse of the Berlin Wall.