It’s a few years back but an indelible memory.

I was wearing nothing but a pair of shorts. My skin felt like a salted crust against the breeze. The tropical sun was heating and drying our yacht after the battering it had received from three days caught in an Indian Ocean cyclone. 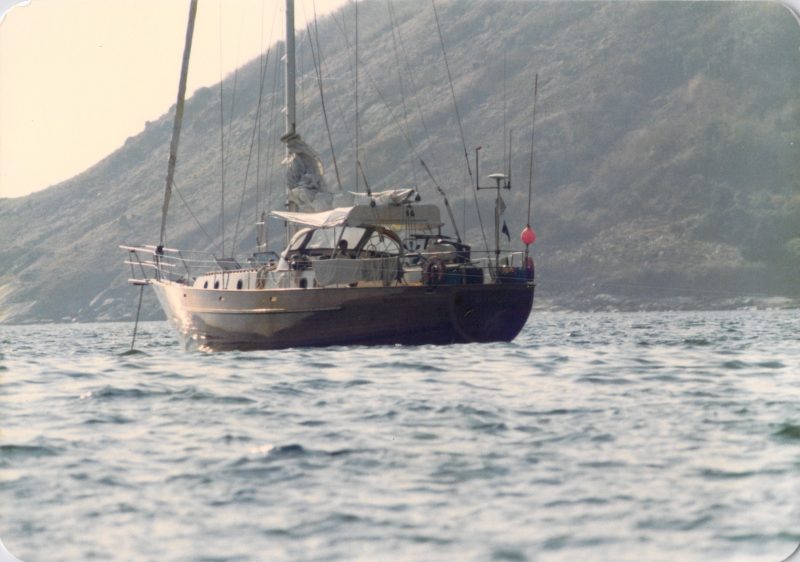 The Sannyasin in a bay in Thailand

All five of us were exhausted. The three young teenagers, two girls and a boy, were sleeping, and I was on deck in the center cockpit, crouched over pieces of the engine’s damaged water cooled exhaust system. We were drifting in the remote, uninhabited parts of the Sunda Strait between the jungle choked mountains of Java, Sumatra, and the remnants of Krakatoa. In 1883, the volcano had experienced the greatest eruption on earth in the past 2,000 years. It created massive destruction and loss of life.

As the area was now officially off limits to dwellers, we were the only humans for a hundred miles – or so I thought. Although as a former Western Australia Fisheries & Wildlife officer, I had heard tales of thieves and murderers attacking private vessels in these waters, my mind was relaxed and blank as I tinkered. Then I heard a faint noise appearing and disappearing with the wind. Fear pricked my neck.

I realized it was an engine. I spun around and saw a 10 metre-long, low, black-painted power boat 400 metres away, downwind, heading directly at us.

Piracy at sea, contrary to popular belief, is not just a romantic artefact of days gone by, but a very real, dangerous industry of the 21st century. In fact, Southeast Asian waters are the most dangerous of all. Although there has been an increase in law enforcement through the region, pirate attacks number in the thousands each year. Several sailors are murdered and kidnappings are common. 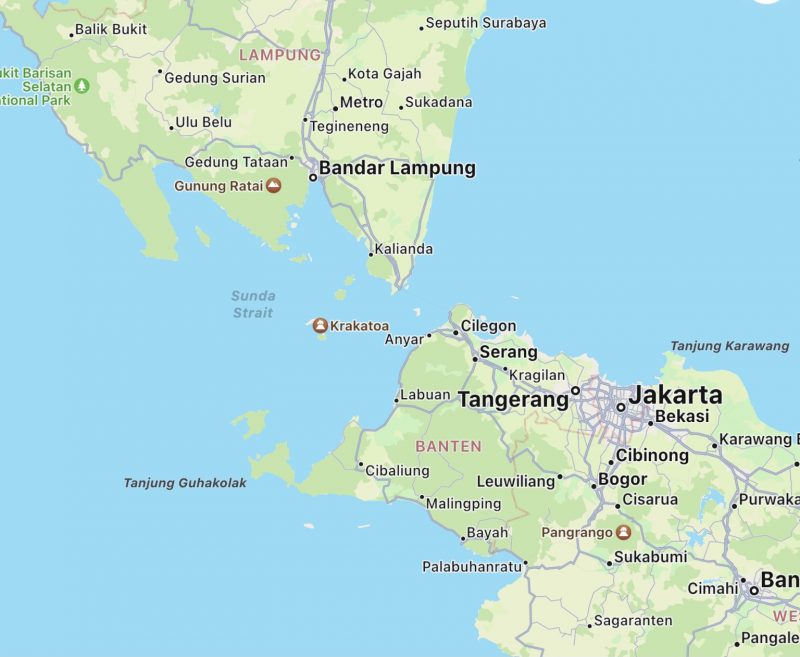 Many cruising sailors elect not to carry guns. Because I knew we would be sailing dangerous waters on our way to Singapore and on through Southeast and South Asia to Europe, I had decided to buy firearms before we left Australia. What a test of my resolve that was. The Department of Defence had to approve the export of weapons by an Australian citizen – apparently afraid that I might be smuggling guns to revolutionaries in some foreign corner of the world. I had persisted and we did have a handful of small firearms on board. Right now, however, they were stowed away below decks. I leapt up from my crouching position and yelled to the lower cabins, “Marcus, get me the shotgun!”

I heard fumbling as he moved around and called out, “Where is it?”

I had a sinking feeling. At 18, Marcus, although a truly excellent young man, was just learning his way around boats and equipment. I jumped to the helm to start the diesel engine – no simple task on this yacht. I pushed and pulled on levers, turned the key and slammed down the starter button.

The solenoid thrust in and the engine turned over, building compression. It fired. I had the throttle full open, the disassembled and unmuffled exhaust roared. Smoke belched out of the engine room. I pulled back the revs and pushed the gear lever forward. In seconds we were at full revs again. The boat surged forward.

“Here’s the gun,” said Marcus as he pointed it up through the hatch.

Crack! – A bullet slammed through the three feet of air between us.

“They’re shooting at us,” Marcus cried out in shock and disbelief.

“Get down!”, I heard John yell from below deck as Marcus and I hit the cockpit floor.

The engine suddenly stopped dead. I’d forgotten that as I’d disconnected the damaged cooling system, the automatic shut-down would cut in. Silence returned, broken by two more cracks of bullets breaking the sound barrier near our heads and the drone of the approaching engine. We were without power and steering. I peeked above the edge of the cockpit and saw 10 or 12 men standing up on the deck of the approaching boat – some with guns. They were about 200 metres away by now.

There are many stories of Asian pirates raping and murdering crews and refugees. We were prime pickings. The yacht and its equipment would have enormous value to them on the black market. The young girls on board would have been an added bonus.

I felt a wave of determination wash over me. Fear shifted to defiance. These ratbags were not coming onto my boat. I can never remember another time that I felt so focused and resolute. The odds seemed overwhelmingly against us. I opened the shotgun – “Not loaded! – It’s not loaded!!”. The shells were under my bunk – minutes of unpacking away.

Transformed by the danger, he flew down the stairs and was back in seconds. This gun was also unloaded but there was a full 10-shot magazine in a locker beside the steering wheel – left over from target practice.

“Everybody stay down!”, I yelled, clipping the magazine in as fast as I could. As I loaded the gun I experienced a moment of acute anxiety. This was a .762 caliber, NATO standard, semi-automatic assault rifle equivalent – powerful and lethal. However, it had a bad habit of jamming the first bullet.

The other boat was now 50 metres away. I pulled the bolt back and rammed it home. Thank God!! The first bullet slid smoothly into the breach. I felt a surge of power. The world and time moved into slow motion. I stood up with the rifle butt pressed hard into my shoulder and my cheek resting against the warm, varnished wood of the stock.

This time my view of the pirates was through the rifle sights. Their boat, charging at us, was now less than 30 metres away. Some of the men were positioning themselves to jump onto our deck.

My sights were pointing directly at the center of the first man’s chest. Years of vermin control in the bush and days of target practice at sea had made me fully proficient with the Browning – a weapon originally designed for one purpose only – killing people. This man I aimed at was as good as dead. At that range, the bullet would pass right through him, rip a hole in his back and have a similar impact on the man behind him.

I squeezed the trigger – but fired the entire magazine not into the men before me but into the few meters of water that remained between our boats. The roar, echoed off the water, was deafening. In the instant it took for the air to clear, the men dropped from sight.

Their boat swung around, slamming into, and sideswiping our vessel. Not so much as a head bobbed up as it began to move away from us at speed. I stood there motionless, watching.

I heard Karima call out, “Do you need this?”

She was standing in a lower cabin, below the deck hatch, juggling a very hot, spent cartridge case ejected from the Browning. At 13, she didn’t realize the difference between live and used shells. I looked at the innocence on her face and felt a flood of relief. My knees went weak. I slumped against the cockpit side but jumped up again immediately. The pirates were still close at hand.

We rushed to unfurl the Genoa headsail. A stiff breeze was still blowing, and our yacht pushed forward. Then, suddenly our assailants changed direction. They were no longerheading away from us, but parallel to our course about 150 meters away. I watched in disbelief, feeling sick with adrenalin.

Something popped inside me. I loaded and aimed the Browning, and fired the full magazine across their bow. The bullets stitched across the sea immediately in front of them. This time they took off – directly away from us.

We spent the next day mainly in silence. Every so often one or the other of us would say, “That was so close,” or, “They were so lucky you didn’t shoot them,” or “Let’s not ever let any boat near us.”

No one asked, “What would have happened if we hadn’t scared them off?” 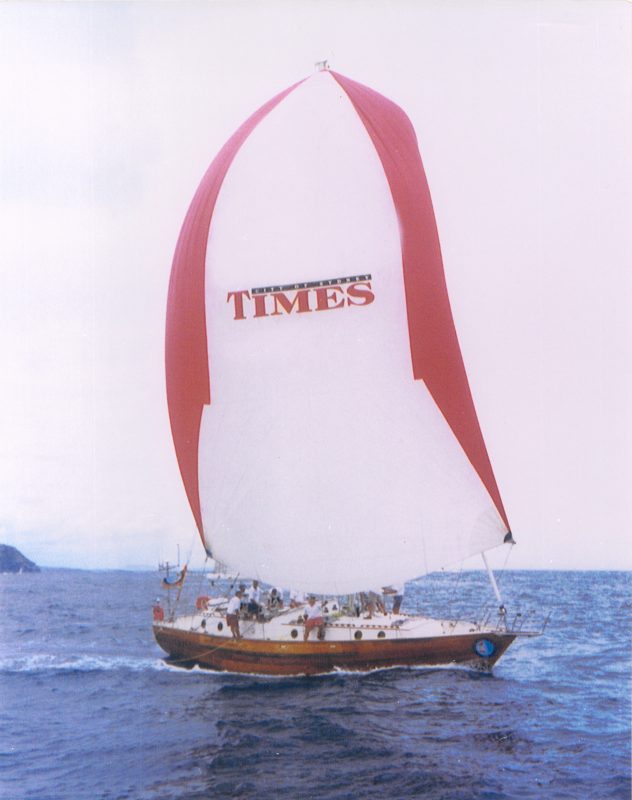 The Sannyasin under sail

A few days later we arrived in Singapore and spent the next month repairing our vessel. We had planned to sail north up the Malacca Strait between Sumatra and the Malay peninsula. The area is notorious for piracy, and we had real trepidation about leaving. Then one dark, moonless night a quite severe tropical storm hit the area. I figured that no self-respecting pirate would be out in that weather – so we slipped out of harbour and sailed into the teeth of the storm. As soon as we left port, I turned off all navigation and cabin lights. I also shut down the radar as other vessels can often pick up telltale signals from operating equipment.

The wind squalls on our beam gave us a good turn of speed and, although making conditions very uncomfortable, delivered us safely through the storm and up the length of the Strait. For the rest of our ocean crossings to foreign destinations, we never let any vessel come closer than several miles from us.

* Words and photographs by Jay Harman