I recently conquered ‘The Peak’.

Frenchman Peak/Mandooboornup is in Cape Le Grand National Park, 40 km east of Esperance. I was standing on solid granite 1,200 million years old that extends thousands of metres below the ground. 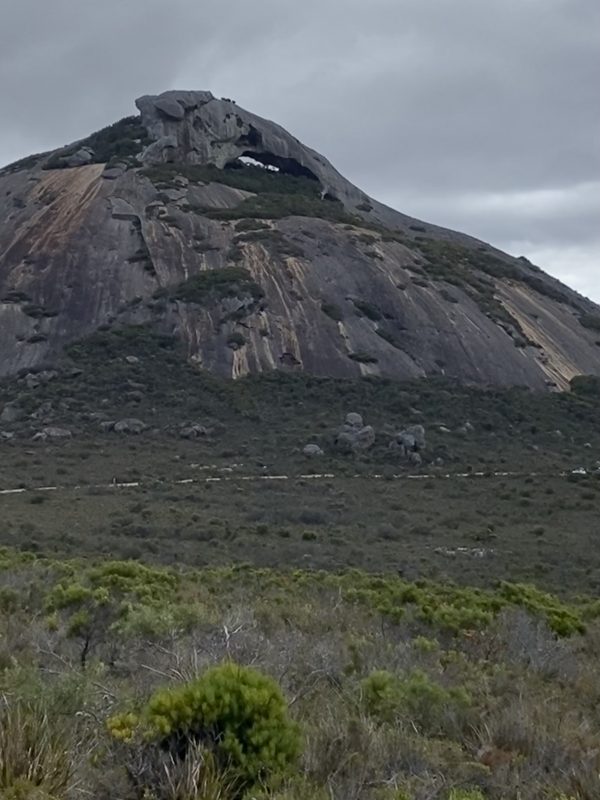 This granite was born as a huge mass of molten rock deep within the earth’s crust. Over eons that followed, rain, rivers and glaciers gradually wore away the covering material to reveal giant domes of granite.

The summit of Mandooboornup is 262m and promises grandstand views of the southern coastline and the islands in the Recherché Archipelago (recherché means exquisite, rare or exotic in French). 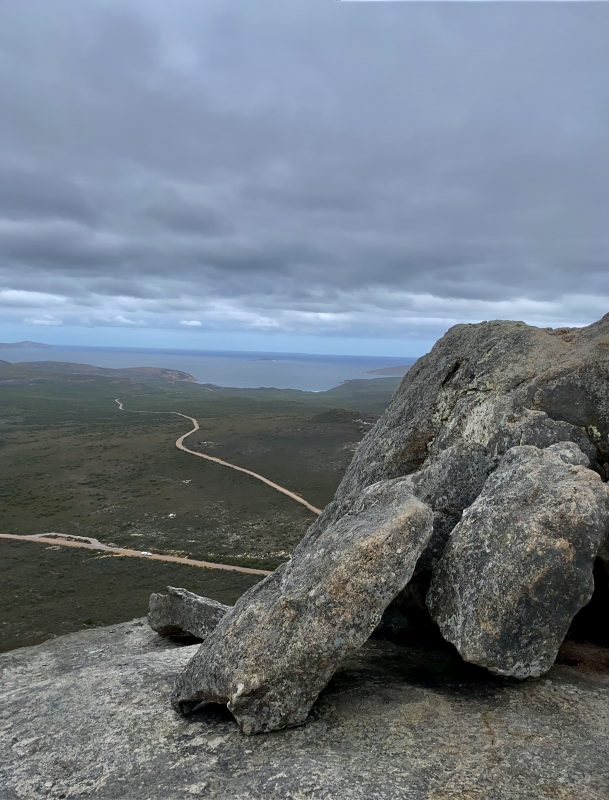 Why all the French names? Over 200 years ago, in 1792, two French sailing ships ‘L’Esperance’ and ‘La Recherché’ commanded by Admiral d’Entrecasteaux were forced to seek shelter from a storm. The French were here before the English, but chose not to stay. How different Australia would be if they had.

Frenchman Peak did not get its name from the French. A party led by the early colonist and first WA Premier, John Forrest passed through the area in 1870, in search of good country for pasture. During this 5-month expedition from Perth to Adelaide, his brother, surveyor Alexander Forrest, named Frenchman Peak because its shape was said to resemble the hats worn by the French troops in the 1800s.

The 3 km out-and-back trail begins from the car park at the eastern slope of the peak. A gravel path skirts the base before the rocky ascent. Fat grey clouds blanketed the sky and I hoped it wouldn’t rain.

It’s a wildly beautiful and biodiverse area with coastal heathlands and granite outcrops. I was pleasantly surprised at the number of wildflowers in bloom at this time of year: orange borya flowers, pincushion hakea and grevillea to name a few. 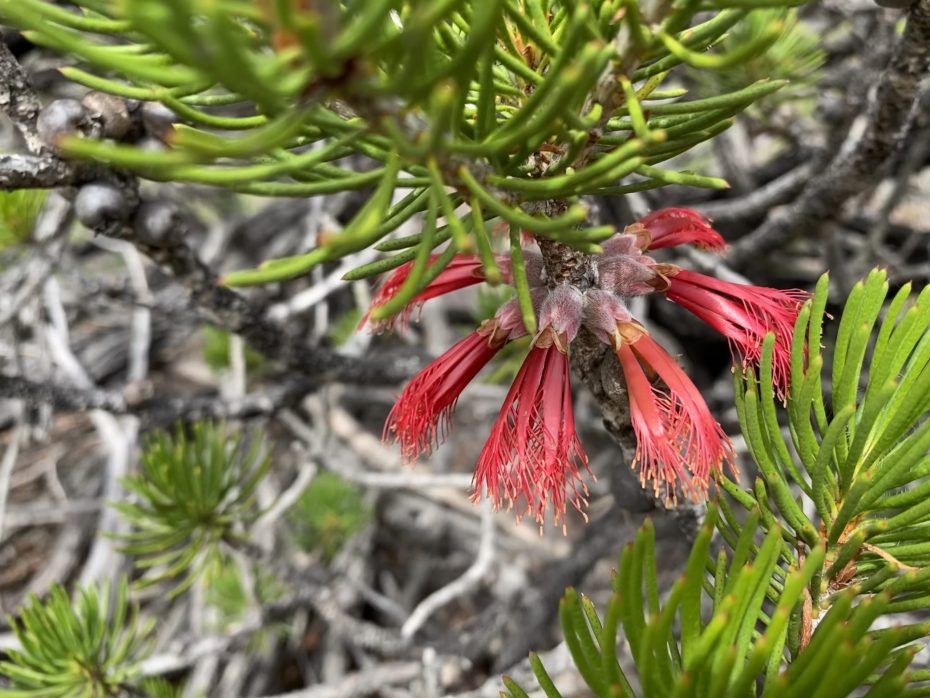 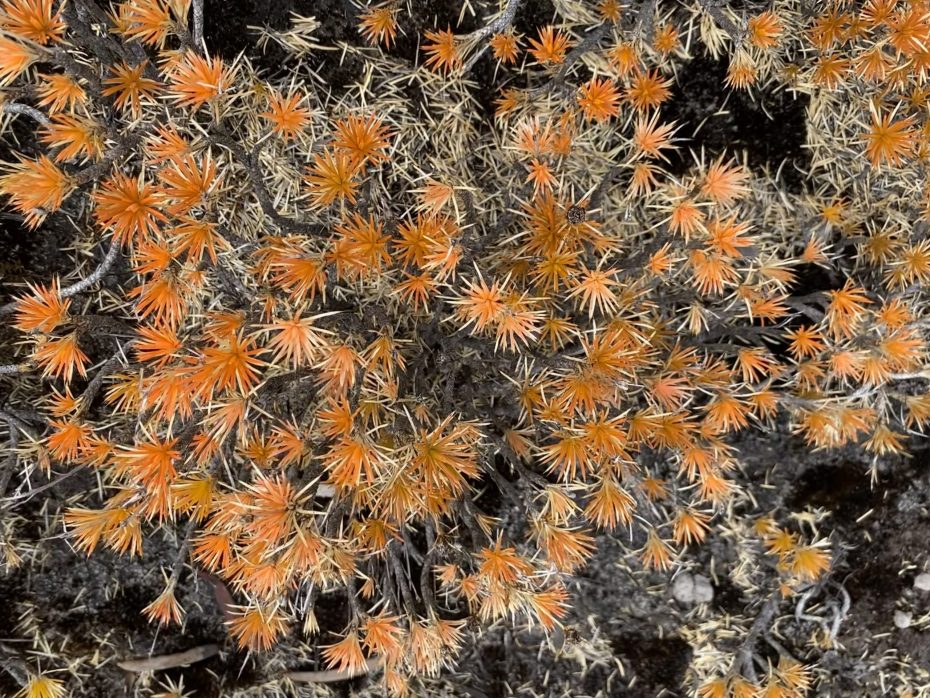 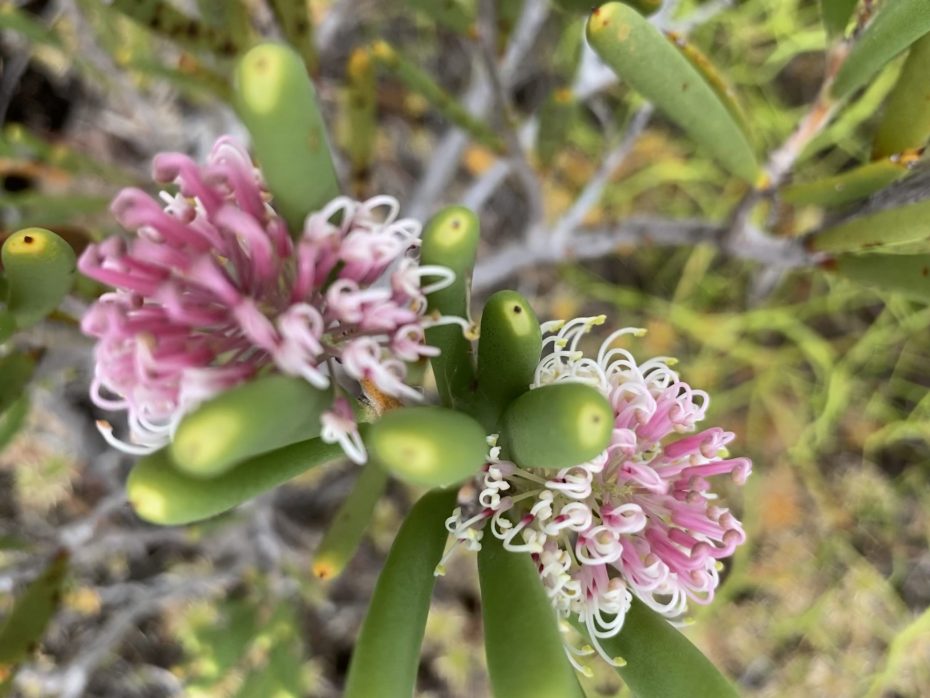 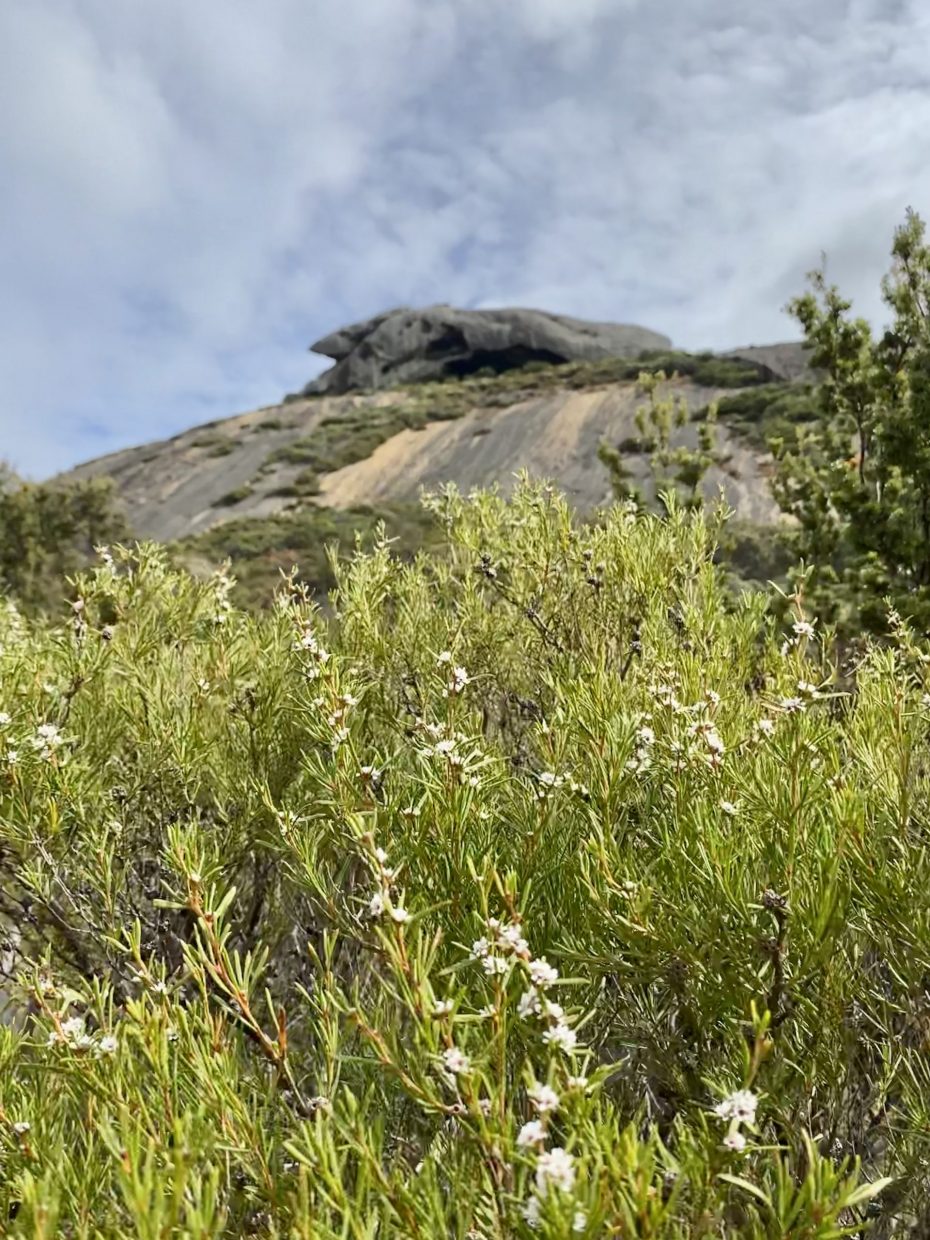 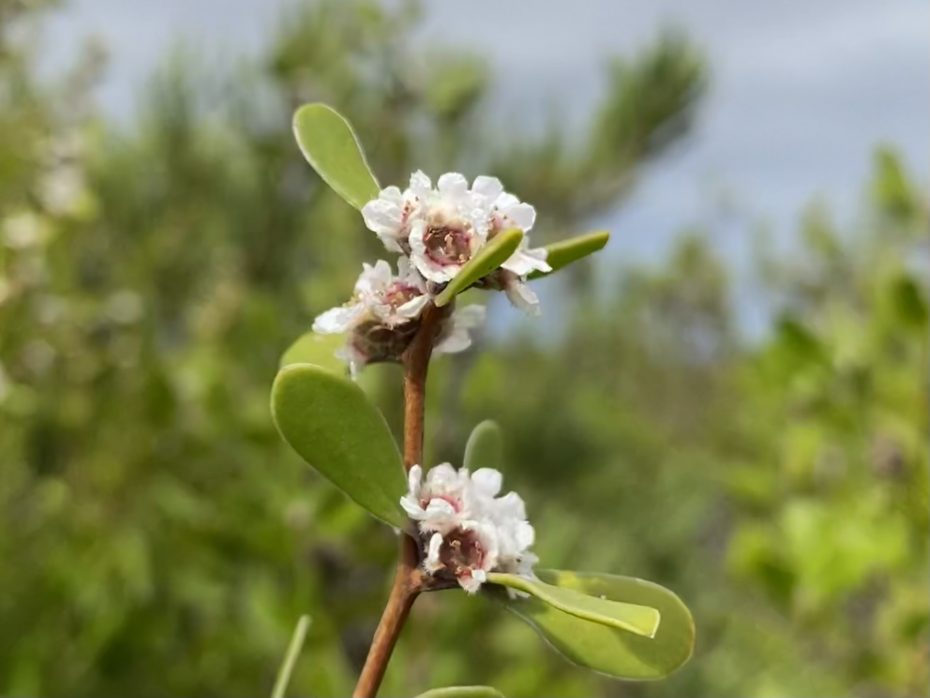 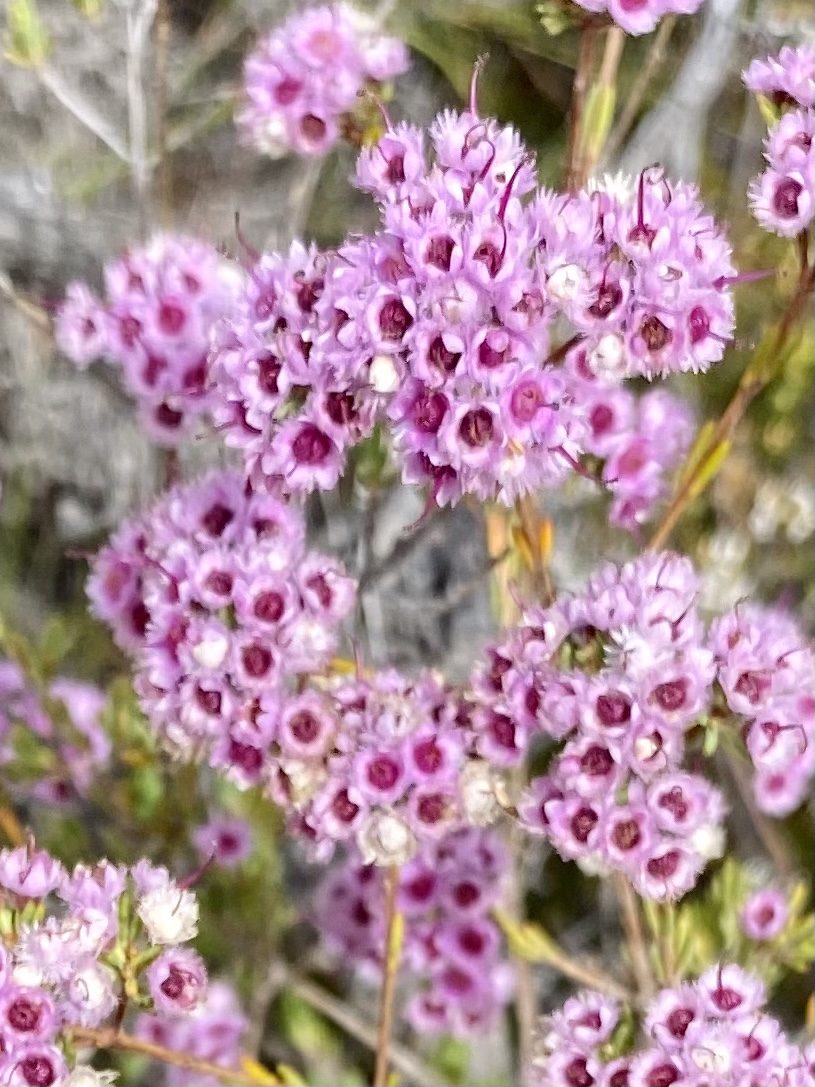 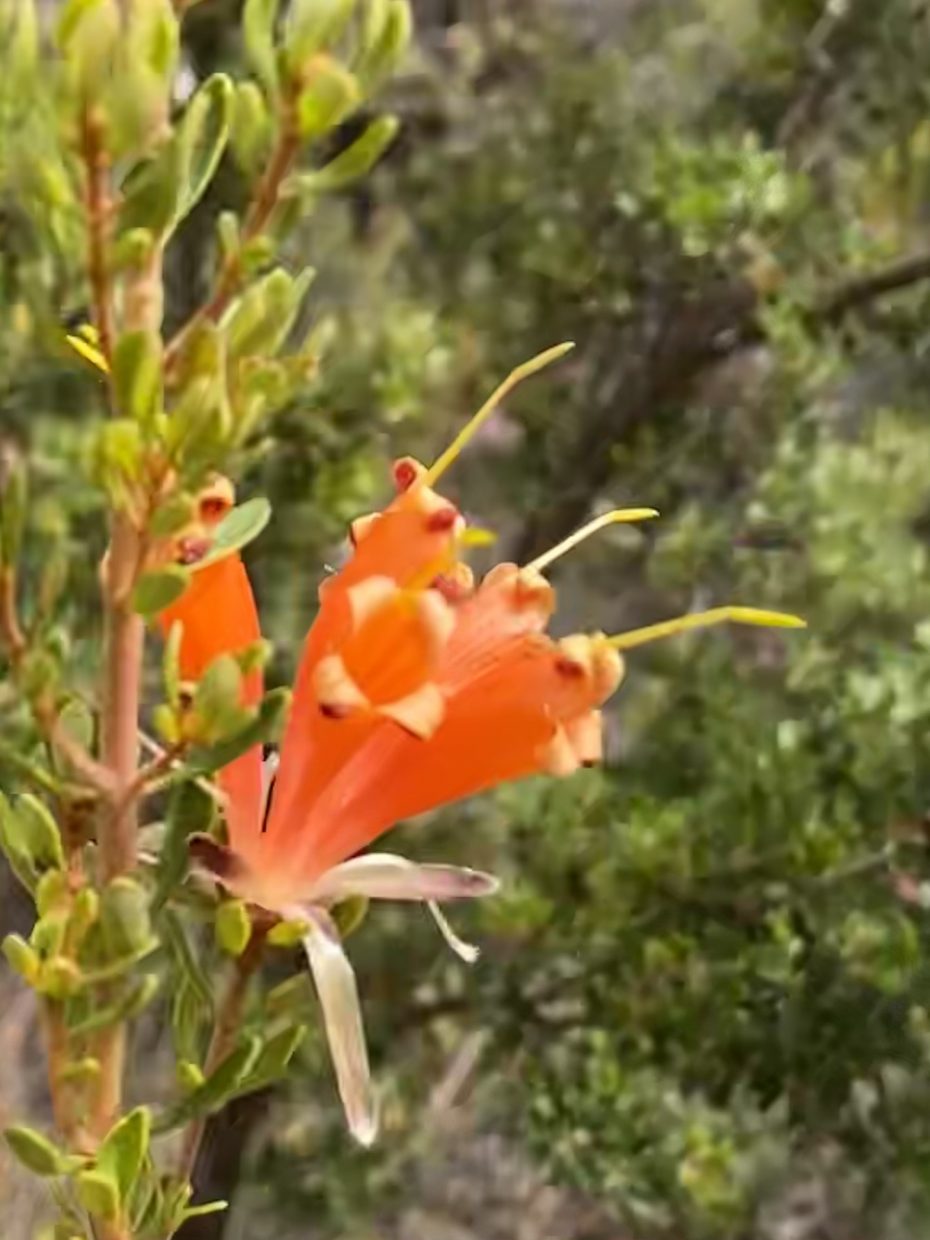 Some of the plant species found in this area were first known to science after being collected by a botanist on board L’Esperance.

This is a Class 5 hike; so allow at least 2 hours for up and down. The walk is a challenging steep climb to the summit and requires a good level of fitness. It’s important to wear proper hiking boots or shoes and appropriate clothing. 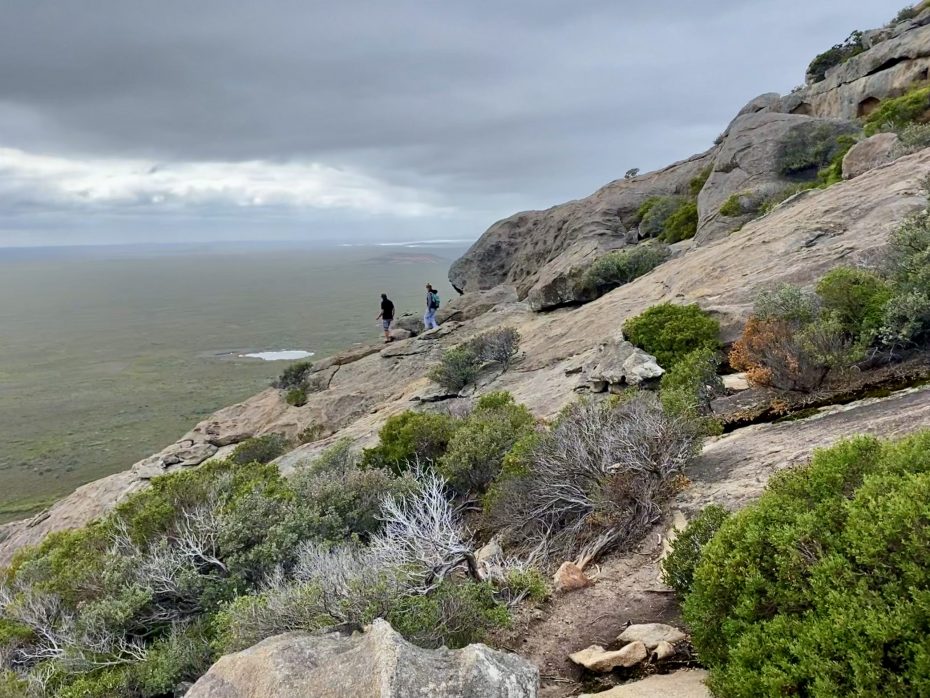 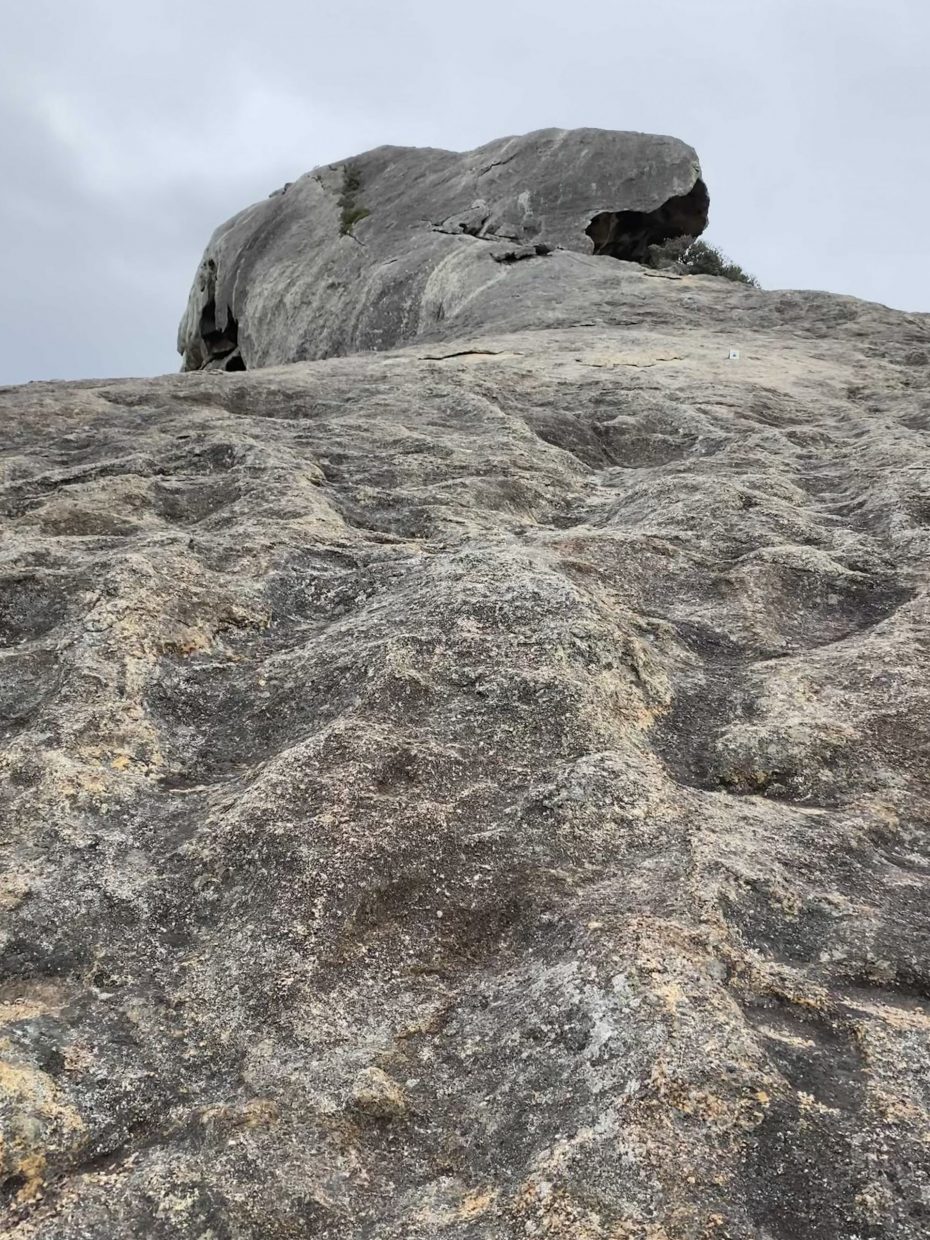 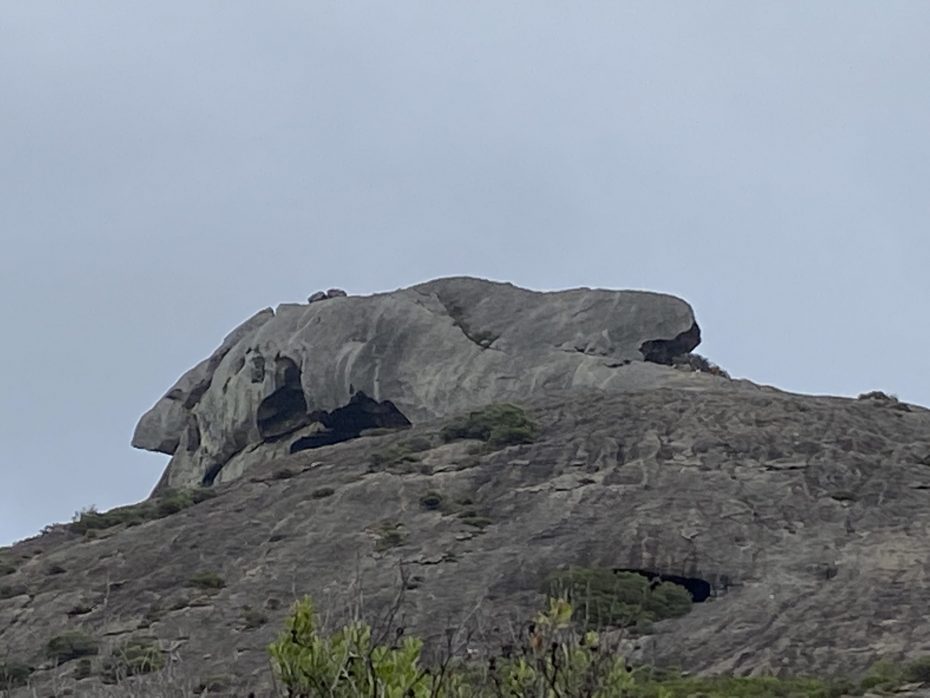 The path consists mostly of bare rock with some gravel in the lower section. Loose or uneven rocks and wet surfaces create trip and slip hazards, so you have to watch where you place your feet. The walk is not recommended in wet or windy weather.

Do not attempt to take a shortcut, as the rock is deceptively steep, especially on descent. The trail is unmarked apart from where there are occasional wooden pegs and walk trail symbols on the bare rock.

On the climb to the summit, you come to a large cave – thought to be formed by wave action some 40 million years ago. The sea level was at least 250 metres above its present level; waves pounded this granite peak, slowly carving out tunnels and caves at the summit. 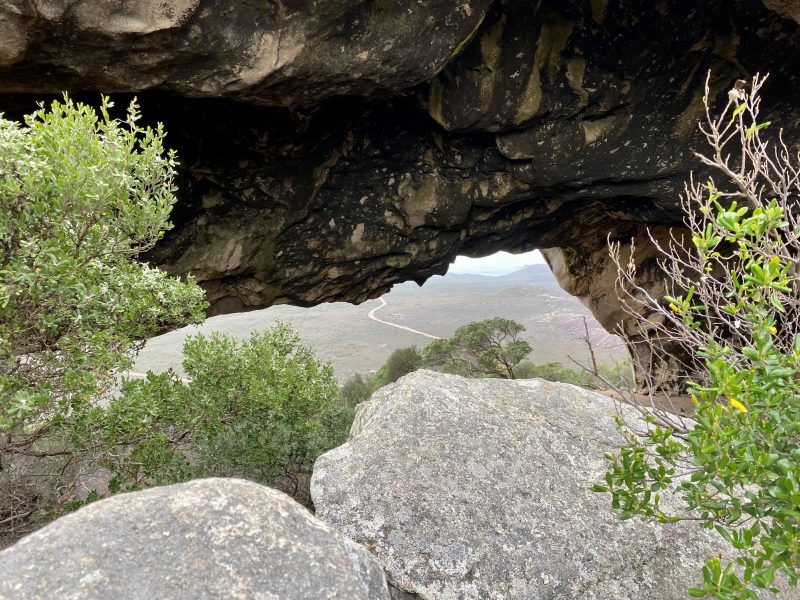 The climb from the cave to the top is more difficult and some clambering over rocks is necessary. The view from the top of Mandoorboornup is outstanding with timeless vistas of granite peaks, sweeping beaches, turquoise bays and the islands of the Recherché Archipelago. 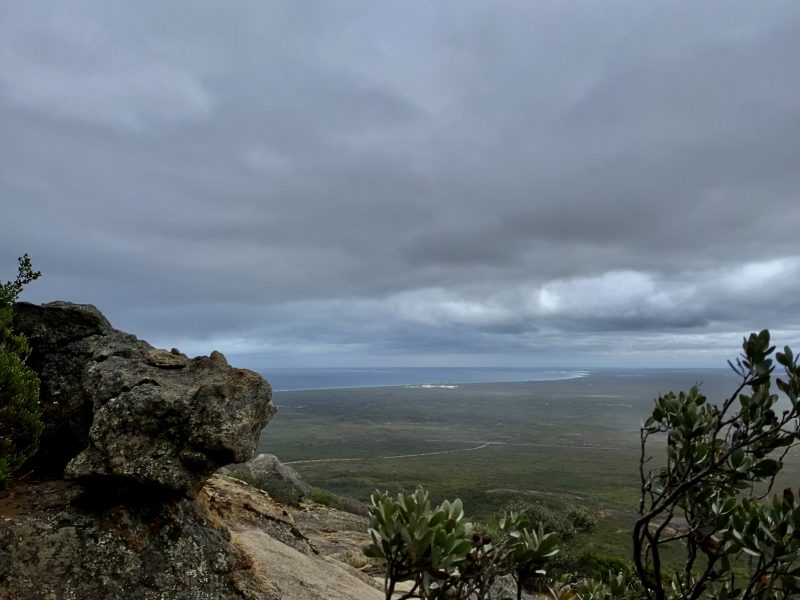 I enjoyed the solitude of the peak – I had it to myself for about 15 minutes. There were glimpses of blue sky over the ocean on the horizon. The chilly wind took my breath away and grabbed at my hair and my clothes.

And then the descent…probably more challenging that the ascent!

But you can then reward yourself with a swim in Hellfire Bay! 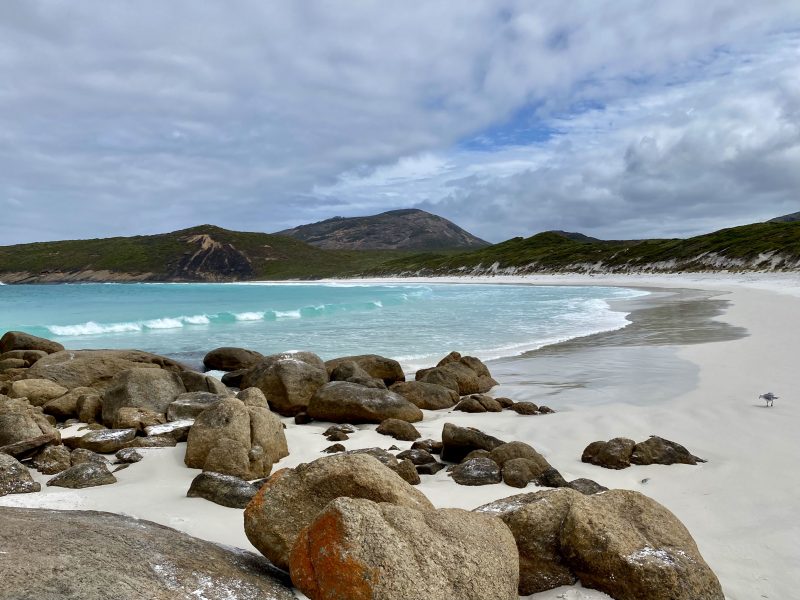