We here at Fremantle Shipping News have been covering various campaigns to free the world’s oceans of plastics pollution.

Not long ago we covered the coming home of circumnavigating sailor, Jon Sanders, noting how his latest voyage around the world was sponsored by Mindaroo Foundation, the charitable and eco-minded trust established by Dr Andrew Forrest and Nicola Forrest, and carried the message ‘NO PLASTIC WASTE’.

We also brought to attention The Art and the Action of No Plastics, including the artwork of Brit, Mandy Barker that conveys the nature and extent of the plastics problem through astonishing photographs.

It is estimated that more than 8 million tonnes of plastic waste enters the oceans every year. This pollution threatens estuaries, coral reefs, fish and millions of families that rely on the oceans. Most of the plastics in the oceans come from waste thrown on the ground or washed into rivers. Better wastewater treatment and stormwater management in many developing countries would stop some of the 1.5 million tonnes of micro-plastics that end up in the oceans every year. Fast population growth in many cities around the world is increasing plastic pollution.

The oceans provide countless benefits to the planet and people, such as food, medicines, renewable energy and natural resources. The oceans provide billions of people with an income and a healthy diet. Oceans are also important for the climate. They absorb about 30% of the planet’s carbon dioxide, buffering the impact of global warming. 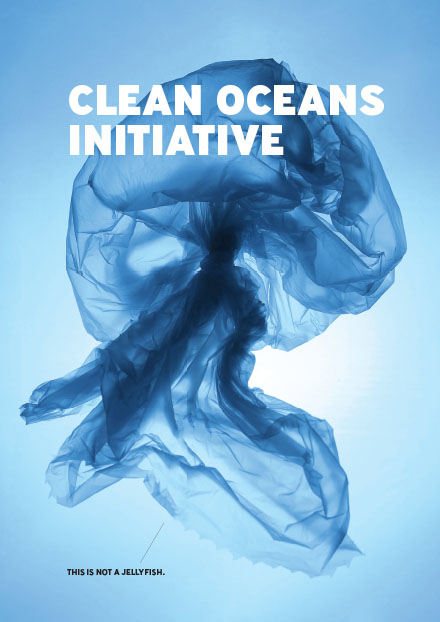 Now we report big news from Brest, France advising that the Clean Oceans Initiative, last Friday, 11 February 2022, dedicated to funding projects aimed at reducing plastic pollution at sea, has doubled its commitment to now provide €4 billion by 2025 to protect the oceans.

The members of the Initiative are the European Investment Bank (EIB) (www.EIB.org) and KfW acting on behalf of the German Federal Government, together with Cassa Depositi e Prestiti (CDP) the Italian National Promotional Institution and Financial Institution for Development Cooperation, and ICO, the Spanish Promotional Bank. The European Bank for Reconstruction and Development (EBRD) was welcomed in Brest as the latest member.

Given the threats faced by the oceans and the urgency to protect this natural resource, the Clean Oceans Initiative decided at its recent Ocean Summit to raise its target to provide €4 billion of financing by the end of 2025, in place of the €2 billion initially expected to be reached by 2023.

The Clean Oceans Initiative identifies projects that decrease the release of plastic waste in rivers, seas and on land globally, with a particular focus on riverine and coastal areas in the most polluting countries located mainly in Asia, Africa and Latin America. A significant amount of plastic waste enters the oceans from the ten major river systems located in these continents, which lack access to regular waste collection and controlled waste disposal systems, as well as adequate wastewater and stormwater management systems.

In three years, the Initiative has achieved 80% of its target by providing €1.6 billion long-term financing for public and private sector projects that reduce discharge of plastics, micro-plastics and other litter to the oceans through improved management of solid waste, wastewater and storm water.

Projects signed so far under the initiative will benefit more than 20 million people living in Africa, Asia, Latin America and Europe. Examples include improved wastewater treatment in Sri Lanka, China, Egypt and South Africa, solid waste management in Togo and Senegal and stormwater management and flood protection in Benin, Morocco and Ecuador.

AFD Chief Executive officer Rémy Rioux said: “I am proud that AFD Group is contributing, alongside five prominent public development banks (PDBs), to the strengthening of the Clean Oceans initiative, which has committed to doubling its financing to reach 4 billion euros by 2025. This commitment, which was announced at the One Ocean Summit in Brest, demonstrates that PDBs work closely with coastal and river stakeholders to reduce plastic pollution in the oceans resulting largely from land-based activities. I am also delighted that EBRD has joined this initiative, thereby reinforcing Team Europe in its fight to preserve the oceans.”

CDP CEO Dario Scannapieco said: “Preserving the environment and natural resources is a major goal for CDP and is one of the priorities of the new 2022-2024 Strategic Plan. In times when we re-build our economies, our commitments for the achievement of the 2030 Agenda must not falter. CDP stands ready to play an active role by promoting constructive partnerships and looks forward to join forces with its Clean Oceans Initiative partners and is delighted to welcome EBRD as an important partner.”

EBRD President Odile Renaud-Basso said: “We are delighted to join this important initiative for the future of our oceans and the planet. The EBRD’s robust commitment to green investments and track-record in fighting environmental degradation in marine ecosystems, such as the Baltic, Black, Mediterranean and Red Seas, make us ideal partners to push this agenda forward. Our operations in greener municipal infrastructure, maritime transport, as well as property and tourism will make a real difference in reducing ocean waste and, in particular, plastics.”

EIB President Dr Werner Hoyer said: “Clean oceans are essential for a sustainable planet. I am proud of the success of the Clean Oceans Initiative and warmly welcome the EBRD as our new partner in the pursuit of our ambition. This kind of cooperation is crucial to tackling global challenges and a great example of the value that EIB Global, our dedicated arm for global partnerships, can bring.”

ICO Chairman José Carlos García de Quevedo said: “Preserving the health of our oceans is a priority to consolidate the model of sustainable growth and development. With this goal in mind, as national promotional bank, ICO reaffirms its commitment to the Clean Ocean Initiative. We are proud to join together with other NPBs, our efforts to the founders of this initiative (AFD, KFW and EIB) to achieve the new target set for 2025.”

KfW CEO Stefan Wintels said: “The oceans are under severe pressure: they are polluted, littered, overfished, their species richness is massively compromised. Being one of the initiative’s founders, KfW is therefore very much welcoming the new commitment to double the overall target by 2025. In addition, we are delighted that EBRD has joined the Clean Oceans Initiative. As a common European response to a key global challenge, this step strengthens our joint efforts against plastic waste.”

All in all, an amazing initiative.