The Freo Oval Masterplan – Not The End But The Beginning

We all love ‘Masterplans’. At least, we seem to. There’s nearly one for every challenging thing you can think of, especially in the world of urban planning.

Don’t get me wrong, it’s usually a good thing to plan. But a masterplan should not be confused with a final plan. Nor should it be thought hard questions won’t arise along the way to realising a masterplan. They will.

That said, at long last there is afoot a Masterplan for the future development of the Fremantle Oval precinct.

The question of a masterplan for the Freo Oval has been bedevilled by the complex urban setting of which it is part. There’s the World Heritage Fremantle Prison to the east, the hardly world heritage Freo Hospital to the south – although it has the highly significant heritage place, The Knowle, adjacent to the Oval – and the City Centre immediately to the west. One has to tread carefully when doing anything on or near this precinct.

And then there are additional complications, including the fact the old Dockers headquarters is within the Oval area, and the State Government are planning to build a new Fremantle Police Station on the old Stan Reilly site, between the Hospital and the Oval, fronting South Terrace.

And on top of all that, not only won’t the Town of East Fremantle consider joining its Freo cousins and running just one local government area, but East Fremantle Sharks Football Club won’t countenance the idea of sharing one footy oval either!

Who’d be an urban planner? Or urban masterplanner?

Well, the City of Freo fortunately has the plannners and also key project partners to help resolve the headaches, or many of them.

The Masterplan passed the last meeting of the Council’s influential Finance, Policy, Operations and Legislation (FPOL) Committee on 14 April 2021, and now goes to the full Council at its next meeting for effective ratification. 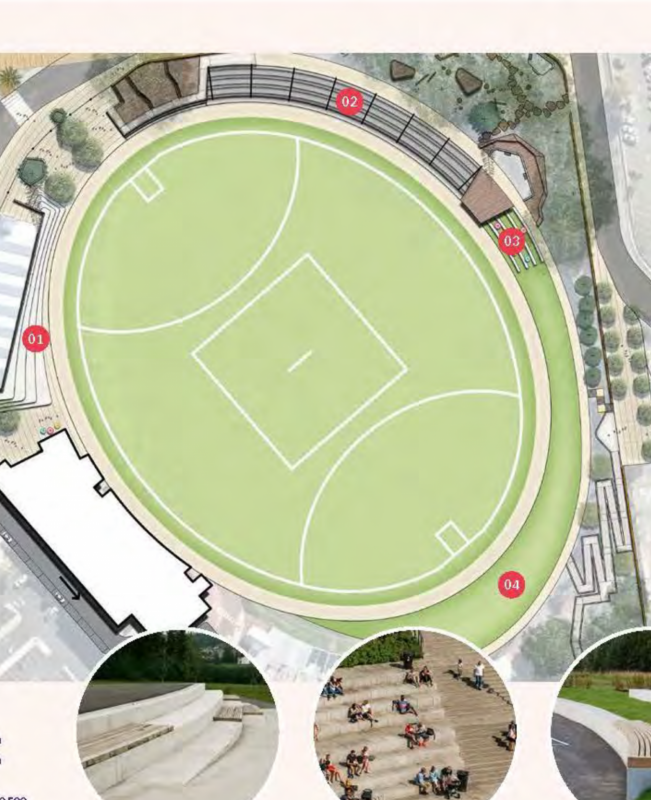 And here are the key groups involved in its preparation. 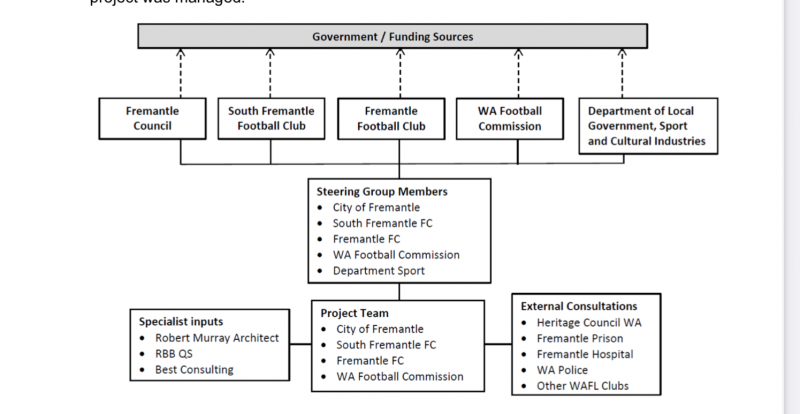 The Masterplan is not a document that will suddenly produce a redeveloped Oval, but its adoption will be an important step in achieving such an outcome. Much more work remains, however, to see the final redevelopment occur.

The Masterplan can best be described as a high-level strategic document for the purposes of:
• Enabling all project partners to advocate for the project and pursue funding opportunities.
• Communicating the project vision with the broader Fremantle community and building support for the project.
• Developing and refining certain aspects of the project, in particular, the community facilities and programs that could be incorporated.

In their report to the FPOL Committee, council officers noted that the Masterplan has been prepared with a clear focus around the need for improvements to facilities and infrastructure for football.

They also observed that it has been developed within a ‘robust strategic framework’ that has taken into consideration:
• An understanding of the high cultural significance of ‘the place’.
• The need to improve the ‘public permeability, access and legibility’ of the precinct
over time.
• Flexibility around the timing and nature of other developments in and around the
precinct.
• AFL and WAFL guidelines for facilities to position Fremantle Oval strategically as
a premier ground for WAFL, WAFLW, AFLW and WAFL finals.

The Masterplan also responds to all the Key Principles adopted by the Council in August 2020, namely, to –
1. Upgrade the Fremantle Oval for football.
2. Improve pedetrian entry areas/access points.
3. Improve pedestrian/cycling permeability.
4. Create clear, new major vehicular access points into precinct.
5. Protect and improve the heritage setting of the Fremantle Prison.
6. Future Potential Development: To be focused around western and southern sides.
7. Future Land Use Planning: With football as the primary focus, other land uses to be encouraged within the precinct include residential, sports administration, community/cultural and public car-parking, which are commensurate with this location on the edge of the city centre, but also help support activity in the core of the city.

The officers added that the Masterplan does not attempt to resolve the issues around future development of the former Dockers building, together with a future road that might go all the way through the precinct at the southern end. These matters will need a longer timeframe to resolve and are also likely to be dependent on the form and timing of future redevelopment within the hospital site.

Accordingly, the Masterplan remains focussed on what can be done now. It sets a clear vision and objectives that, if implemented, would ensure the cultural importance of sport at Fremantle Oval continues well into the future. A critical component of this is recognising the importance of women’s football and community development programs and ensuring that the facilities meet contemporary codes and standards (which they currently do not).

Underpinning the vision, the officers stated, is acknowledgement of, and leveraging from, the unique qualities of the place – from its inner-city location and heritage setting, to the public transport and hospitality benefits – to make Fremantle Oval one of the best WAFL facilities in Western Australia.

The plan also recognises that, as part of City life, the oval must contribute to the day to day vibrancy of the Port City and be more than just about football. It is an essential ‘green space’ in the heart of the city and must remain a critical and integrated part of the public realm for the whole community.

All project partners apparently agree that this will be a key component to the ultimate success of the project.

It should be added that the Masterplan envisages that the redevelopment would happen in four stages, and include a fabulous new headquarters for the South Freo Bulldogs Football Club. Take that Sharks! 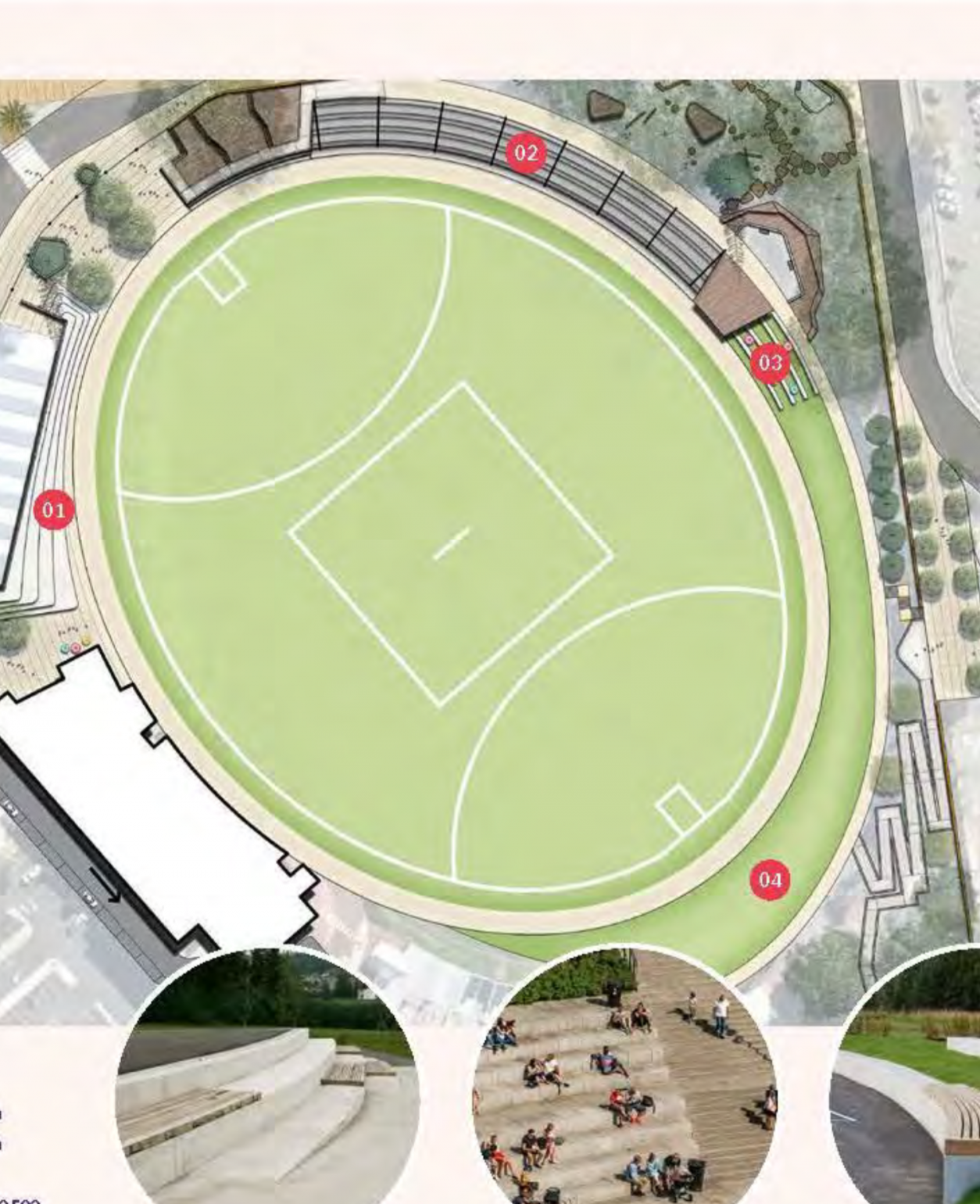 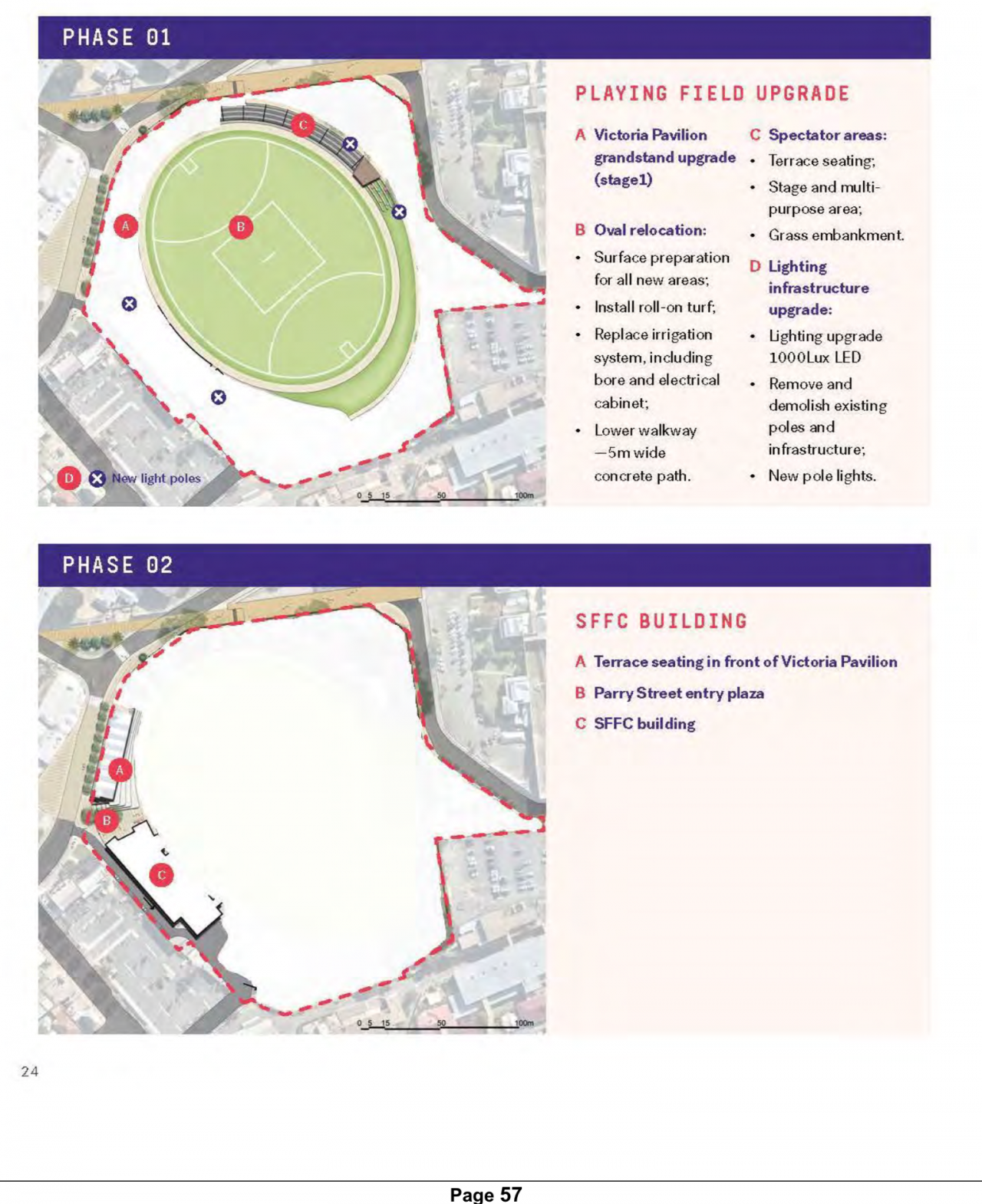 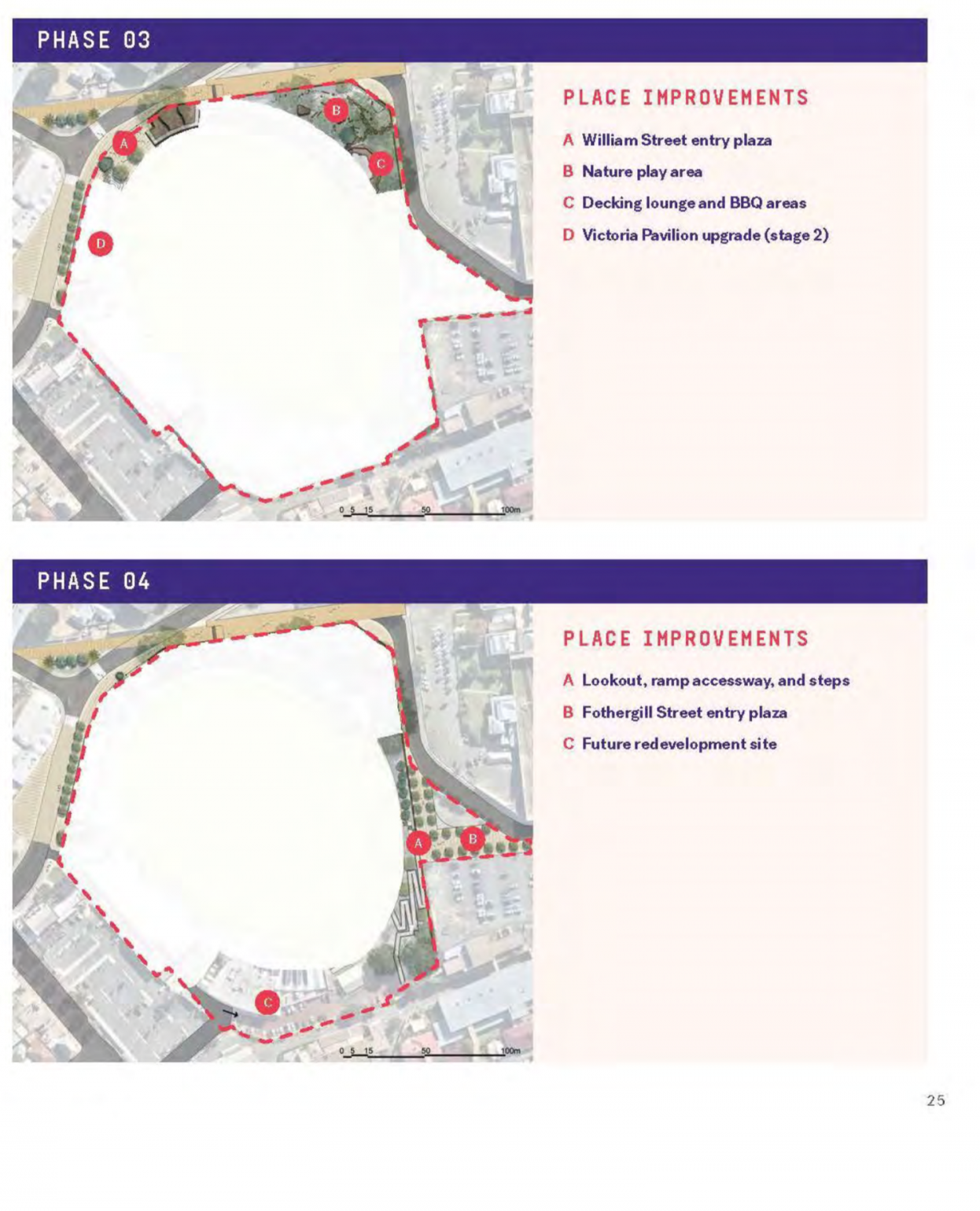 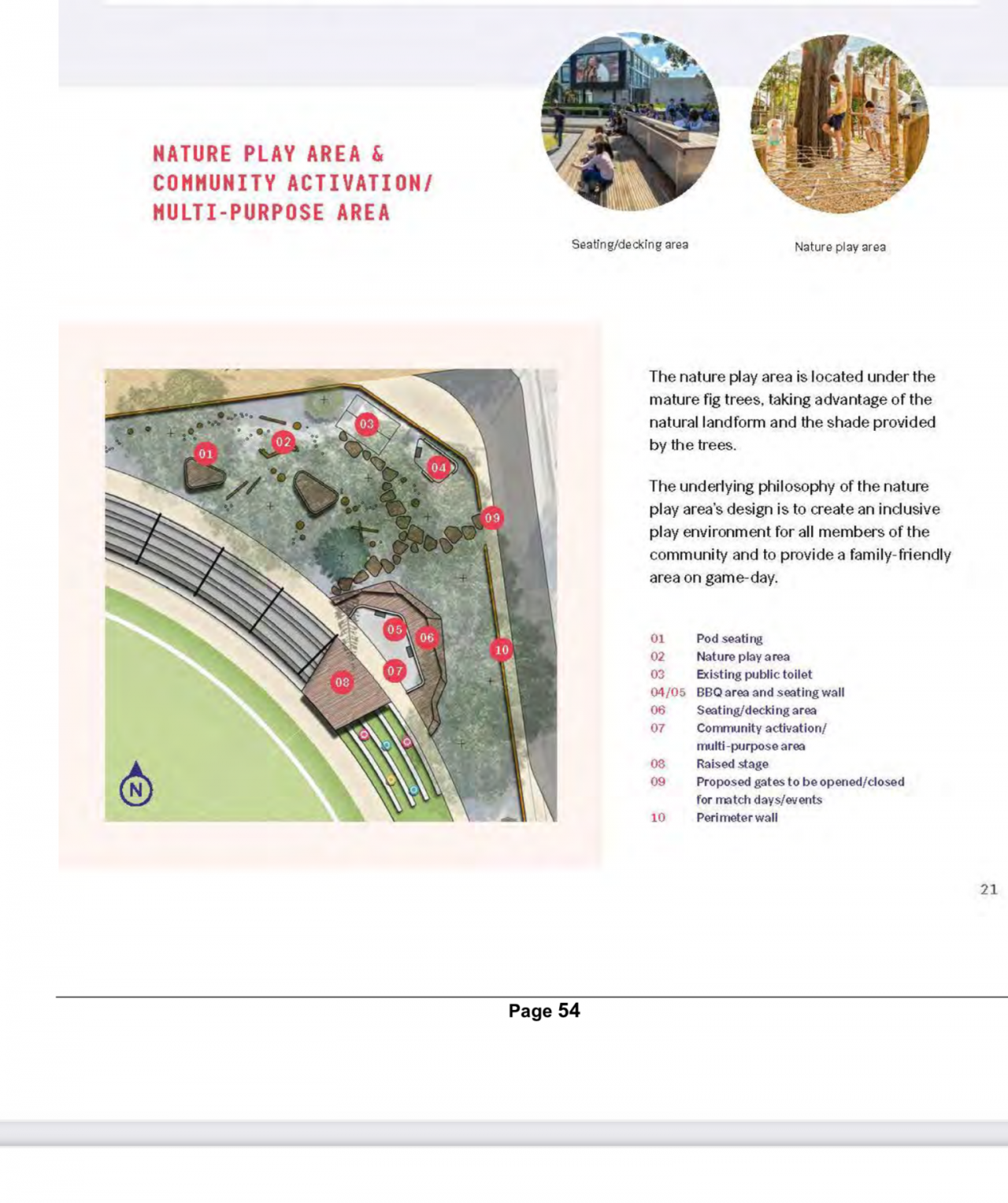 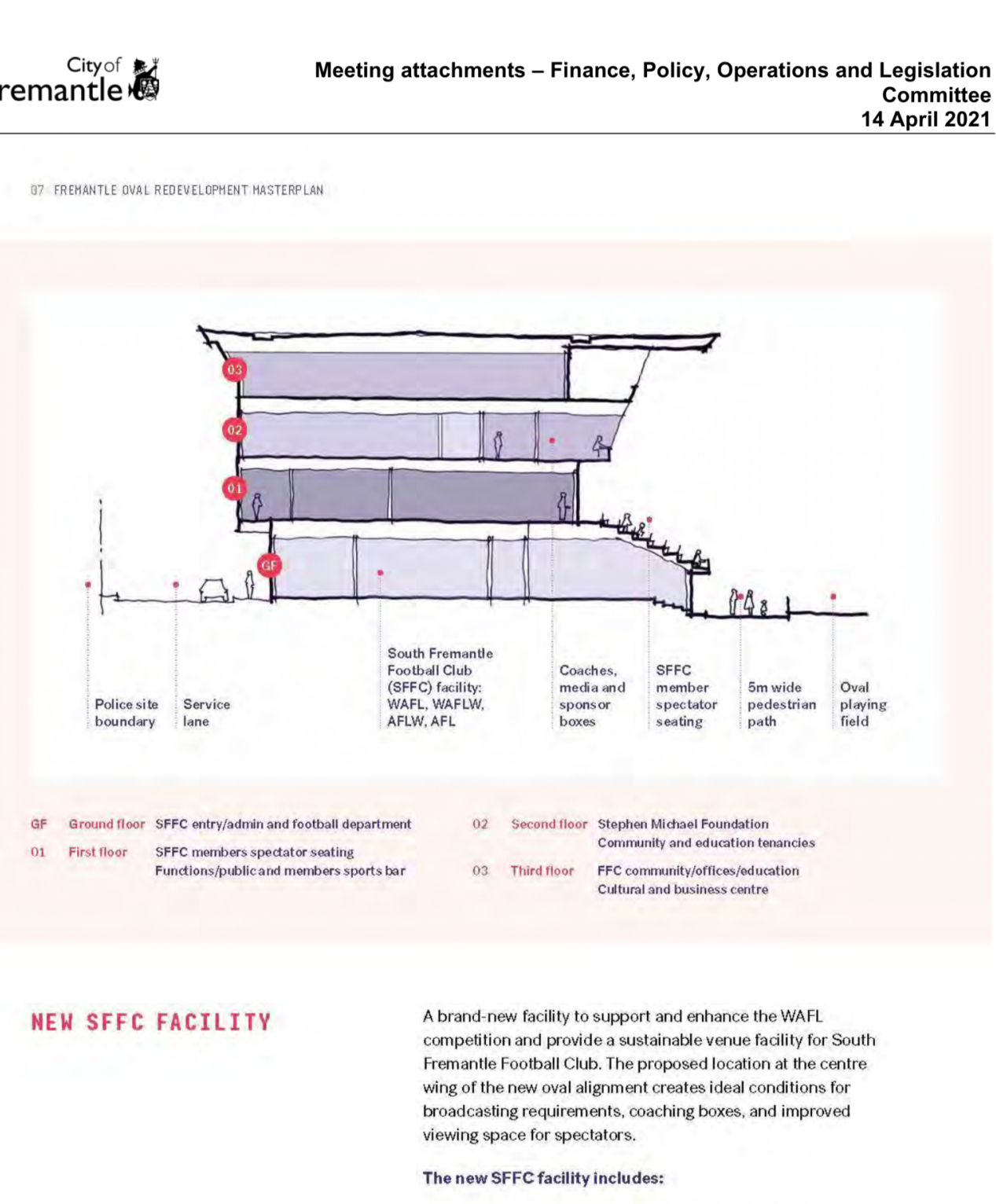 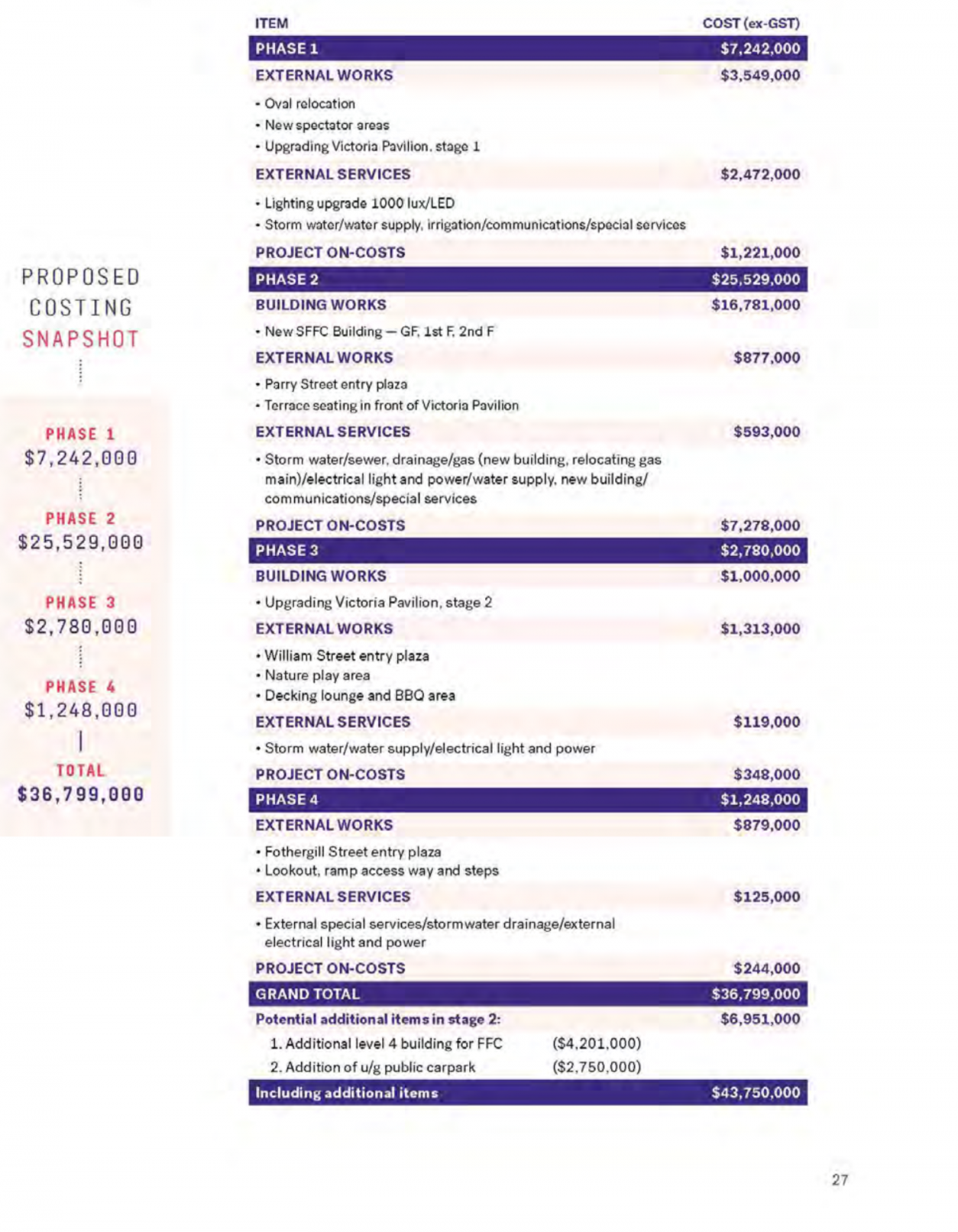 The FPOL Committee adopted the officers’ recommendation that –
Council:
1. Adopts the Fremantle Oval Masterplan, provided in Attachment 1, for the purposes of:
a. Enabling all project partners to advocate for the project and pursue funding opportunities.
b. Communicating the vision with the broader Fremantle community.
c. Developing and refining certain aspects of the project, in particular, the community facilities and programs that could be incorporated.
2. Based on the Key Principles Diagram, adopted by Council on 26 August 2020, notes that other elements of the broader planning of Fremantle Oval precinct, such as development options for the former Dockers building and potential shared public road with the hospital site, will be developed at a later stage.