Christian Brothers College, Fremantle has sought planning approval from the City of Fremantle for the construction of a four storey ‘educational building’ – part of the existing school ‘campus’ – on an existing vacant site at 162 High Street, Fremantle. 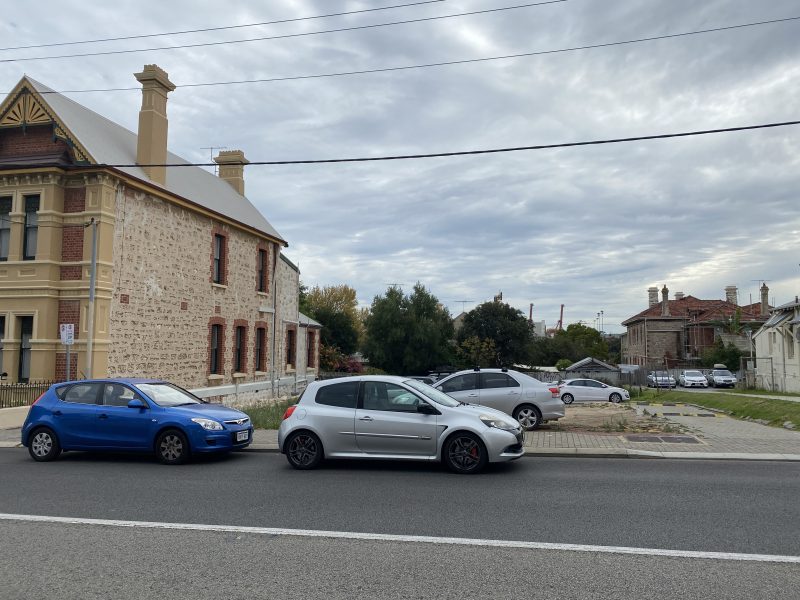 The proposed development is to operate in conjunction with the existing CBC school campus located to the east of the subject site. 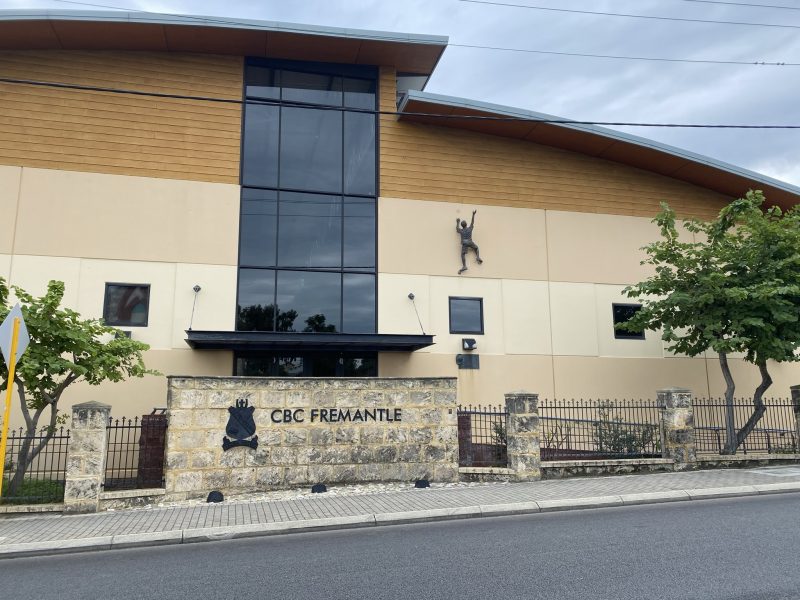 The applicant has explained that the application does not proposed to increase the number of student enrolments at the CBC campus.

The building includes a ‘learning centre’ to be used alongside the existing facilities on campus at CBC – between Ellen Street and High Road, where it’s been for a long time – with facilities including a number of adaptable learning spaces and breakout areas for smaller group work, an auditorium / performance space with stage and backstage areas, toilets and other facilities, and basement level car and bicycle parking. 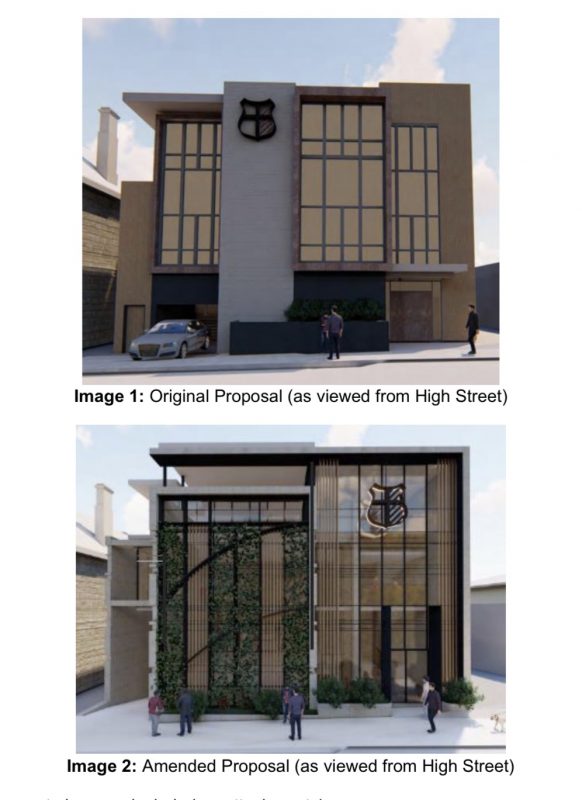 The applicant submitted amended plans on 21 December 2020 including the following:
• Modified internal layout to ensure more activation of the front elevation and
engagement with the street, including improved circulation space
• Reduced building height by lowering the basement level and reduced ceiling heights
of other levels
• Changes to the design including:
-Increased lot boundary setbacks (to the north and west)
-Tree retention (northern side)
-Changed materials
-Increased the number/size of openings
-Introduced lightwells along the east, west boundaries to improve natural light
-Improved landscaping to front elevation
-Addition of ‘green wall’ to front elevation.

The architectural plans were initially considered by the City’s DAC – Design Advisory Committee. It’s initial take on design was to encourage the applicant to amend the proposal to improve the development’s engagement with the immediate locality particularly High Street, enhance the external treatment of the building and investigate further opportunities to include greater student amenities.

In particular the Panel encouraged the applicant to consider the following:
• Consideration should be given to relocating the car parking spaces to a full underground level to release the opportunity for a less constrained ground floor design which can interact with, and be on the same level as, the streetscape.
• Subject to comments from City Officers, consideration could be given to relocating the cars off-site in a reciprocal arrangement with the main campus.
• Consider revising the layout and function of the ground floor level to create a larger, more generous and legible main entry that complements the auditorium space and the ability to interact with the streetscape.
• Consider relocating the WC’s/amenities from the front facade to allow active spaces to interact with the street and provide passive surveillance.
• Reconsider the proposed elevational treatments to the east, west, and north to the same level as the considerations given to the design of the southern elevation, which takes cues from the immediate locality and adjoining state heritage building.
• Consider the opportunity for breakout spaces to support the adjacent learning spaces.

In response to the DAC’s comments, the applicant submitted the amended plans on 21 December 2020.

1. Further enhance the streetscape and the legibility and generosity of the ground floor level by reducing the basement level further and removing the planters directly adjacent to the building entry.
2. Refine the treatment and pallet of materials for the western side of the High Street elevation to reflect the control and well proportioned design of the rest of the façade.

In response to the final recommendation of the DAC, the applicant advised that the basement level was dropped by 250mm, with the building and floor levels of the other levels also reduced in height by reducing internal ceiling heights in response to the first DAC meetings comments, however due to the existing sewer easement constraint along the rear of the site, it was not possible to lower the basement (or overall height) any further. 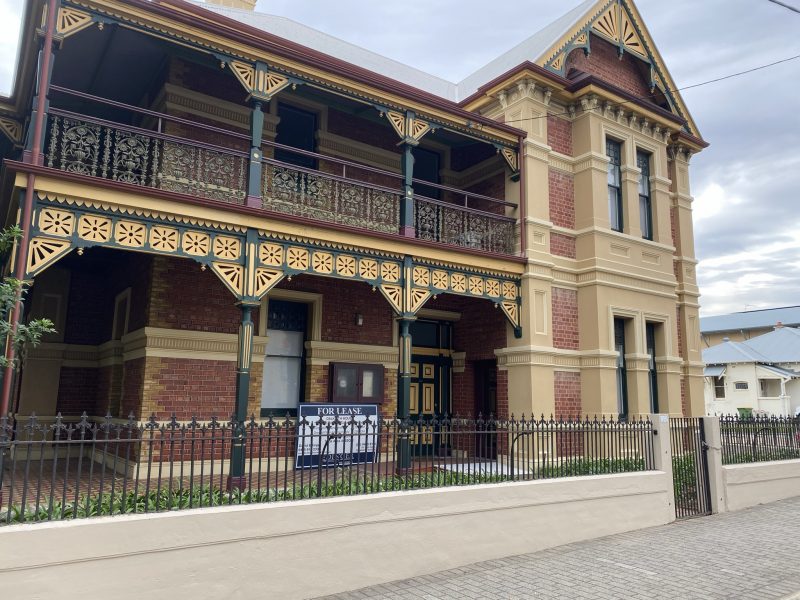 Because the development site is immediately adjacent to well known Dalkeith House, the application was referred to Heritage Services. The heritage advice noted Dalkeith House is a two-storey brick and limestone building and is an excellent and substantially intact example of a mansion built in the Federation Queen Anne style, constructed in the centre of Fremantle during the gold boom. It is important for its landmark qualities.

After consideration and proposed conditions, Heritage Services did not suggest the application be refused.

Fremantle Ports, who are entitled to comment on so much of what happens in Fremantle, also did not suggest the application be refused. Their comments concerned built form requirements.

As you’d expect, there were a number of community comments, seven in all, to this effect –

* Car Parking – The proposed development only provides for four car bays, which is insufficient for a building of this size, capable of holding >200 people

* Building Height/Overshadowing – The proposed building will be much larger than any other building in the street. The overshadowing will impact the properties across the road.

* Noise – Concern about noise from potential evening/out of hours events that might be held by the school and/or external groups.

In their report on the proposal, council officers as required by the City’s planning scheme considered whether the variation in the original plans would be detrimental to the amenity of adjoining properties or the locality generally.

The officers noted that the proposed building would be the tallest building in the immediate locality, with surrounding properties predominantly a maximum of two storeys. However, they considered the increased rear setback, and improvements to the side and front elevations as per the recommendations of the DAC, minimised the potential impacts on the amenity of neighbouring properties.

The officers also considered the degree to which the proposed height of external walls effectively graduates the scale between buildings of varying heights within the locality.

Specifically, they noted that the proposed building is four storeys including an auditorium on levels 2 and 3. Because of this, they considered the applicant had been unable to reduce the overall height or increase the setback of the side walls on upper floors which may have assisted in a more ‘graduated’ appearance. They observed the proposed building is ‘box-like’ with boundary walls on both the east and west side boundaries, which results in a building which does not have a ‘graduated’ appearance, and creates a wall height difference of 3.3m to the west (at the High Street frontage), but in excess of 6m to the east which is a single storey building. The proposal is not considered to effectively graduate the scale between buildings of varying heights within the locality. The proposal was therefore, in their opinion, inconsistent with the intent of this provision to assist in graduating the scale of existing over height buildings in the locality back towards the desired future scale of buildings as prescribed under the Scheme.

As to the question of conservation of the cultural heritage values of buildings on-site and adjoining, the council officers noted the Heritage advice and said the proposal was not considered to have an adverse impact on its heritage significance.

Car and bicycle parking provision was also considered by the council officers to be adequate.

Taking all these factors into account, and on balance,the council officers recommended refusal of the application, noting –

It is acknowledged that the applicant has made substantial effort to improve the design of the development further to discussions at the DAC, and after advertising to adjoining properties.

The increased rear setback helps to ameliorate the impact of the four storey building on the rear residential properties, and the additional light wells improves the amenity of the development itself. The front elevation is much improved in terms of providing better interaction with the street, with improved landscaping.

However, as the building height exceeds the height limit of the Mixed Use Zone and therefore instead requires assessment against all the requirements of cl 4.8.1.1 of LPS4, the proposed does not demonstrate compliance with all four sections, with the height not considered to meet the test of effectively graduating the scale between buildings of varying heights within the locality for the reasons discussed above.

Because the application is not one that council officers can finally resolve, it must be determined by the Council’s Planning Committee.

When the matter came before the Planning Committee on 7 April 2021, it was deferred until the next Committee meeting.

Obviously the questions of concern to the council officers, of height, streetscape and effect on neighbouring residents, all arising from the construction of a tallish building in a reasonably low rise locality, will be significant in the final decision making process.

The Planning Committee resolved that –

DEFER the application for the four storey Educational Establishment building at No. 162 (Lot 464), Fremantle, to the next available Planning Committee Meeting to allow the applicant to consider amending the proposal to:
• minimise the impact of the street setback and boundary walls on the High
Street streetscape and public realm.
• minimise the impact on the setting of Dalkeith House.
• reduce the overall bulk and scale of the development.

We will watch with outcome with continued interest.