Friday On My Mind – Reimagining The Old Fremantle Traffic Bridge

By Michael Barker, Editor of the Fremantle Shipping News

Every now and then something happens in one’s community that really gets you thinking.

Well, for me, the current debate about the future of the Old Traffic Bridge has been that something!

As just about everyone around Freo knows by now, Mains Roads WA is about to implement a project that involves knocking over the Old Traffic Bridge, the bridge that links North Fremantle to Fremantle, and replacing it, with a significant realignment to the east of its current location, with a new traffic bridge.

The project also includes the construction of a second rail bridge, near the existing rail bridge, so that one bridge can take freight rail to be Port, and the other passenger rail.

The project – which goes under the pastoral description, ‘Swan River Crossings’ – has the political support of the State Government, and funding support from the Commonwealth Government. 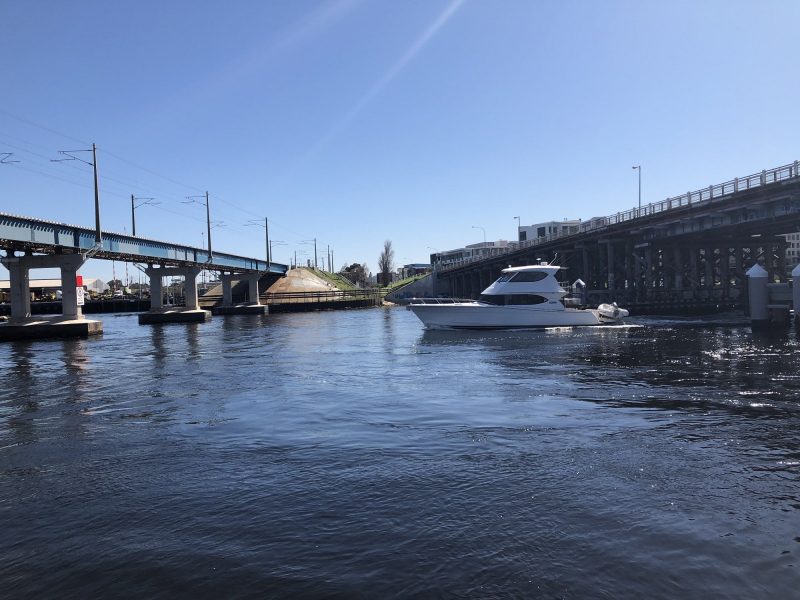 The questions are, however: What bridges, where, and what should happen with the Old Traffic Bridge?

The State Minister for Transport and Planning, Rita Saffioti seems anxious to implement the Mains Roads WA plans without delay.

This is so, even if decision making is happening during a pandemic, like covid, that has had such a significant deleterious effect on the National, State and local economies. And even if the decision making is happening in the lead up to a State general election, when politicians like to be on the nightly news announcing all manner of shiny, new infrastructure projects.

In the case of the Old Traffic Bridge, there should be a pause to consider just how the Swan River Crossings project might be reworked to include the retention, with some redesign, of the Old Traffic Bridge. The thing is it could become a major open space, and a major attraction, along the lines of New York City’s famous Highline. It could link North Fremantle to Fremantle, and create a major open space right on the River.

In reworking the Mains Roads WA Swan River Crossings project in this way, the close proximity of a new traffic bridge to the residential Northbank area of North Fremantle could also be ameliorated.

Experience tells one that, if you limit your horizons by regard to how much money you have to spend on something, you may buy something that works, but not get the thing you really wanted and needed.

Experience also tells one that, if something is really challenging, you can usually quickly come up with a string of reasons why it can’t be done, and settle for a second, or third, best way of doing things.

Experience also tells one that, if you approach any challenge positively by saying, ‘This looks hard, but let’s work out how we can do it?’, solutions suddenly appear.

Experience also tells one that, if you can control your own desire as a decision maker to make a decision quickly, and instead slow down and ask those around you with knowledge, experience and who will be affected by what you’re about to do, what they think, you will be surprised by how much you can improve your decision making.

I know, because I’ve been through it all, personally and professionally!

To me, these experiences all seem relevant to the current debate over the State Government’s Swan River Crossing plans at Fremantle.

It’s time to ask, with the advantage of community input, and slowly, not in a rush, how do we build the new bridges, including the new traffic and rail bridges – and keep the Old Traffic Bridge as a major community asset.

The idea, here, is to keep the Old Traffic Bridge, not as a memento of what an old timber bridge from the first part of the 20th century looked like, but as a repurposed, redesigned, major open space and major attraction linking North Fremantle to Fremantle.

The Old Traffic Bridge could, for example, become a place in its own right. A place where Freo people, their families and friends, and visitors could walk or cycle to and across, or get to from a nearby rail stop. A social and community meeting place right over the Derbarl Yerrigan. A place that links North Fremantle to Fremantle like these communities have never been linked before. A place where the River, and the Port, can be both seen and enjoyed, not just raced over and past. A place where people will love to go. A place that is not just a barren, generic crossover for vehicles and rail.

Some work might need to be done to realise this vision, plainly it does, but surely we are smart enough and creative enough in 2020, to achieve the best, not the second or third best, urban planning, bridges and community outcome possible?