Seafarers Slow Ships In Fremantle And Other Aussie Ports

On Thursday just gone, 6 August 2020, the International Transport Workers’ Federation (ITF) stated that Australia was ‘facing economic carnage from clogged ports as a result of a rapidly worsening crew change crisis around its coasts’.

ITF drew attention, in a media statement, to the crews of two ships in Western Australia and Victoria which it said had refused to keep sailing as of Thursday in bids for repatriation.

The Conti Stockholm, in Fremantle, and the Ben Rinnes in Geelong were identified by the ITF as the ‘latest ships to become idle and block berths due to over-contract crew enforcing their right to refuse to sail indefinitely‘.

The ITF also mentioned the alumina-carting Unison Jasper which, it said, had been held up in Newcastle since the week before.

The Conti Stockholm, a Liberian-flagged ship is owned by German company NSB Group. Here’s a photograph of her, supplied by the ITF, in Fremantle. 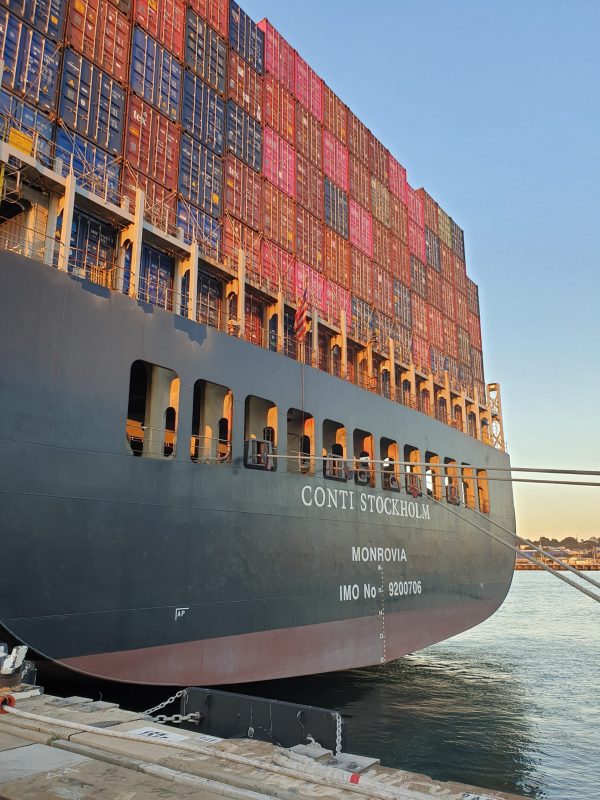 As of Thursday, the ITF said the ship was ‘stranded, going nowhere, as the company awaits a relief crew’. The current Romanian, Chinese, Sri Lankan, Filipino and Polish crew members reportedly had refused to sail the ship and demanded repatriation after many months at sea. These seafarers said they are over contract, and had a right under the Maritime Labour Convention to stop working at completion of their contracts, and be returned home at the employers’ expense.

Here’s a photograph, also supplied by the ITF, of seafarers from the Conti Stockholm displaying their resolve last Thursday. 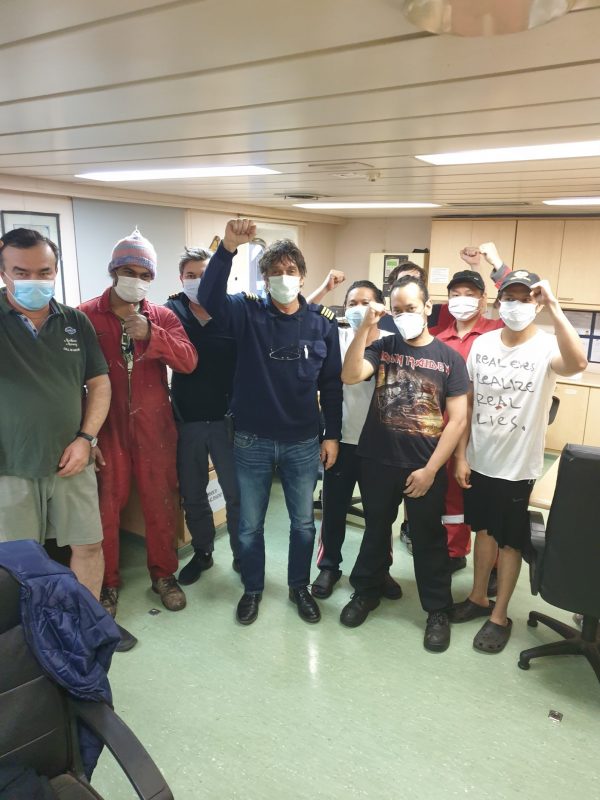 The ITF says it believes the failure of governments to introduce a system of effective crew change has directly led to more seafarers being over contract and taking matters into their own hand to get home.

The second stopped ship on Thursday was the Marshall Islands-flagged Ben Rinnes, which has been chartered to cart soy product for Cargill. The Greek-owned bulk vessel was stopped in the Victorian port of Geelong after initially four, then five, of the crew told the ITF that they wanted to be repatriated following expiry of their contracts.

The ITF say that all of the Ben Rinnes crew who have taken a stand to get off have been on board for longer than the legal maximum, except for just one, who will go beyond the 11 month limit within the next 30 days.
One of the crew has been more than 17 months on board. The crew have told the ITF that they signed five month extensions after their nine month tour, on a promise from the owners to repatriate them. As of yet there are no plans by the company to get them home.

ITF Coordinator for Australia Dean Summers says the federation and its affiliate the Maritime Union of Australia are answering the call of seafarers who are exercising their human right to stop working once their contracts have finished.

“The crews of these two ships have bravely stood up and said that they will not be leaving these ports to do another tour of duty on what amount to floating prisons. They have finished the contracts they signed up for, and now they are getting off. It is not their fault that governments like Australia are so profoundly disinterested in shipping that these governments have not used the last five months of this pandemic to find a way to get international seafarers to and from our ports,” Dean Summers said.

As of Sunday 9 August 2020, the latest reported positions of the three ships appears to be as follows.

The Conti Stockholm seems to have departed from Fremantle be sailing for Malaysia as scheduled. It may be assumed the crewing issues have been resolved. 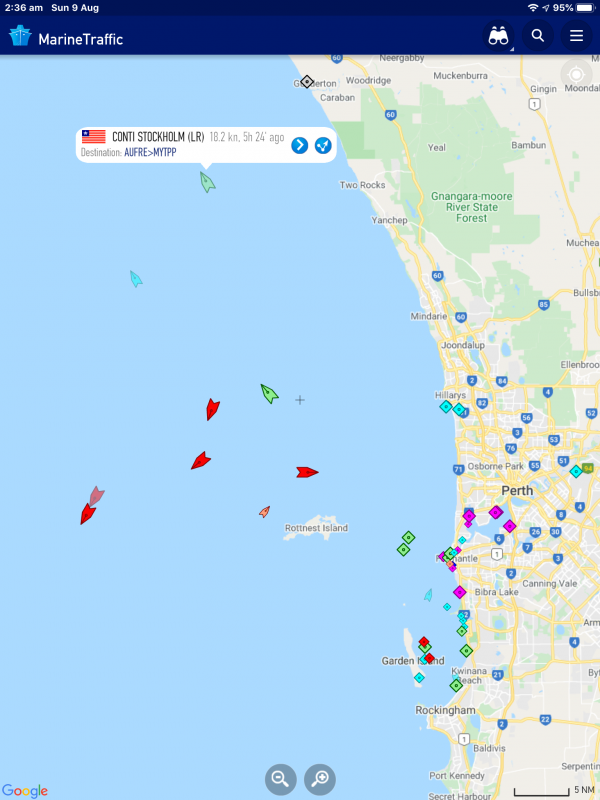 However, the Ben Rinnes remains in Geelong. 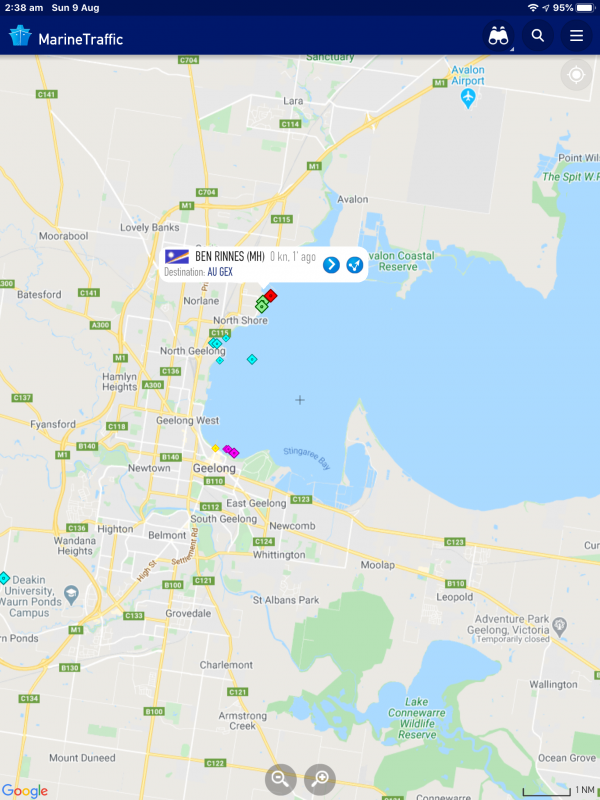 And the Unison Jasper remains in Newcastle. 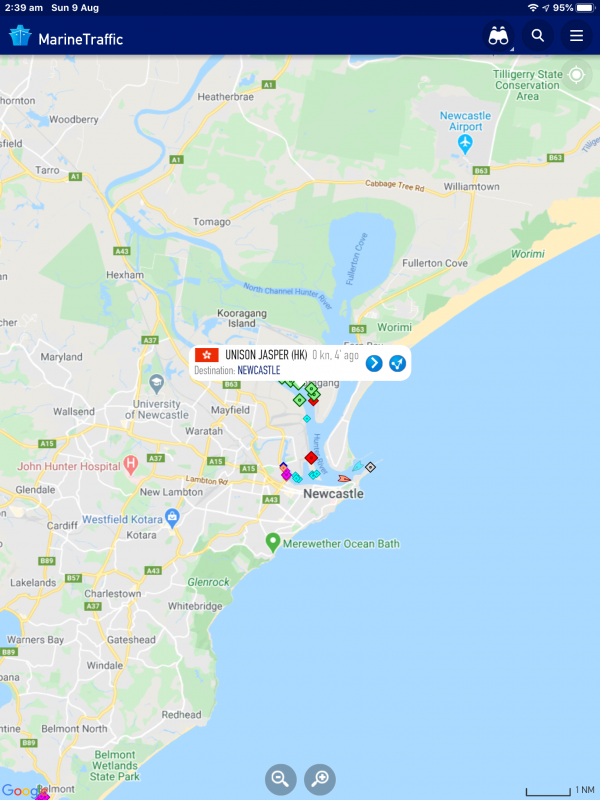