As part of our continuing Governing Freo-style series of interviews with Councillors of the City of Fremantle, we are pleased to bring you this interview with long-serving North Ward Councillor, Doug Thompson. 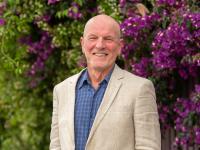 Cr Doug Thompson has lived in North Fremantle for many years and has been closely involved in community issues. He has been a City of Fremantle councillor for the North ward since May 1988 – now 32 years, making him the longest serving Fremantle councillor. He held the position of Deputy Mayor for 2 years.

Doug has represented Fremantle on the South Metropolitan Regional Council (SMRC) since 1994 and has been a state councillor with the Western Australian Local Government Association since January 2008 contributing to policy formulation and advising on matters focusing on alternative transport and sustainability issues.

He has been particularly involved in waste minimisation issues and was instrumental in testing options for waste minimisation at Fremantle City Council, in order to determine
best practices. Cr Thompson believes that cooperative work towards environmental waste solutions is the most important issue facing local government and as such, he has committed to making a significant contribution to facilitating cooperation between Councils for the achievement of environmental goals.

Doug is currently a member of the Council’s Finance, policy, operations and legislation committee.

Doug kindly spoke to Shipping News’ Editor, Michael Barker, about his life and times on the Council over the last 32 years, what he has learned, and why he loves Freo!