Home 2020 May 13 The Street Art of North Fremantle

The Street Art of North Fremantle

By Jean Hudson, our resident traveller

The leaves are turning golden; the autumnal air is cool. It’s the perfect time to hit the pavements and explore local street art. Western Australia has seen an upward trend in public art.
More and more blank walls are being replaced with public art, which often acts as an anti-graffiti measure. Take a few hours to explore North Fremantle’s Public Street Art.
My first stop is the Dingo Flour Mill. You can not miss the red Dingo Flour sign high on the Dingo Flour mill as you drive along Stirling Highway through North Fremantle. You can also see it from the train, the beach or even from the ocean.
This iconic sign has stood near the entrance to Fremantle Port for 76 years. The mill had a facelift in 2016, the steel panels were replaced and the sign repainted. A young Alan Bond, it is said, painted the Dingo Flour logo in his early sign-writing days. The logo is often found on clothing and souvenirs. 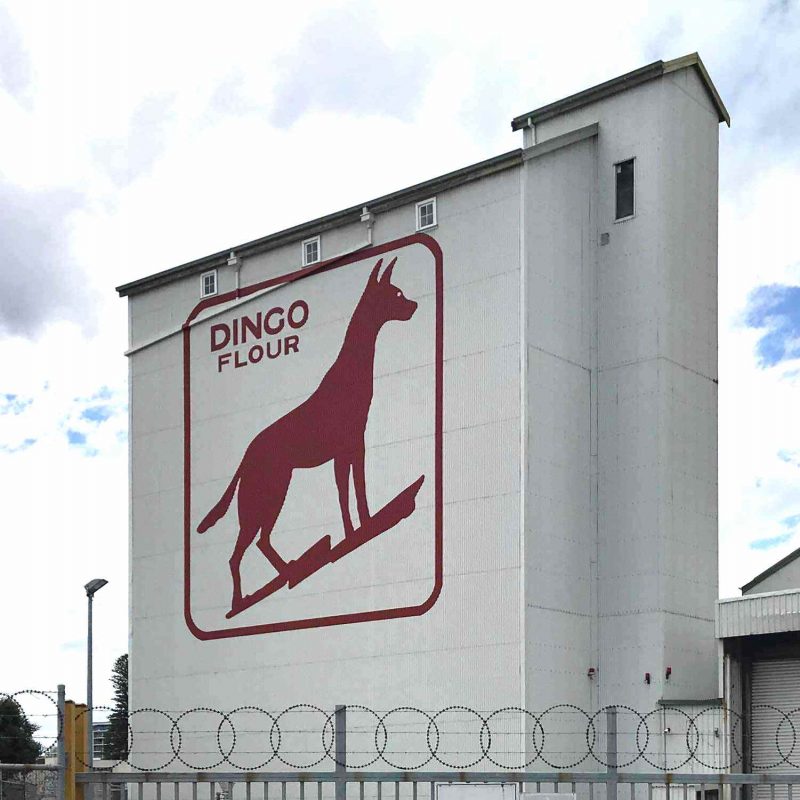 Further along, at 94 Stirling Highway and across from North Fremantle Station, Alice Ford has painted Ethyl the Sea dragon on a large wall at iKids dental practice.
I walk behind North Fremantle Station towards Pearse Street. In 2013, the Hive Gallery commissioned a 150-metre long mural in an effort to combat tagging. Three local street artists – Jackson Harvey, Jerome Davenport and Luke O’Donohoe – took 6 days to complete it.
The three used $5,000 worth of spray paint. The mural says, “Welcome to Freo” and has a nautical theme. A giant kraken is making short work of a ship entering port. The kraken is a legendary sea monster from Scandinavian folklore. 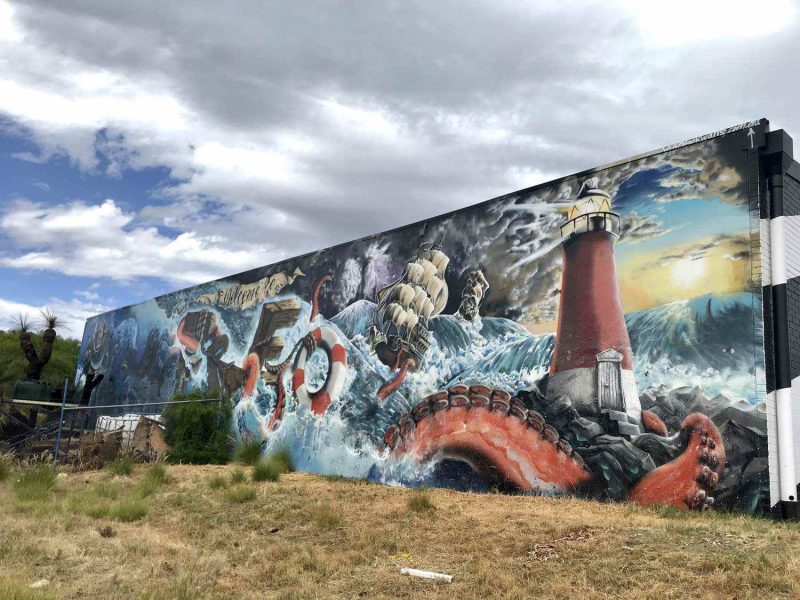 According to the Norse Sagas, the kraken dwells off the coasts and terrorizes nearby sailors. To see it, next time you are on the train look East after North Fremantle station, or take a stroll up Pearse Street.
Next stop is beneath the old railway bridge. Known as Underline, The North Fremantle Rail Bridge Mural Project was curated by Sherrie Wilson Projects in 2015. Six local artists – going by the names Kyle-Hughes-Odgers, Amok Island, Fecks, Ayres, Jesse Lee Johns and Nemco completed the revival. 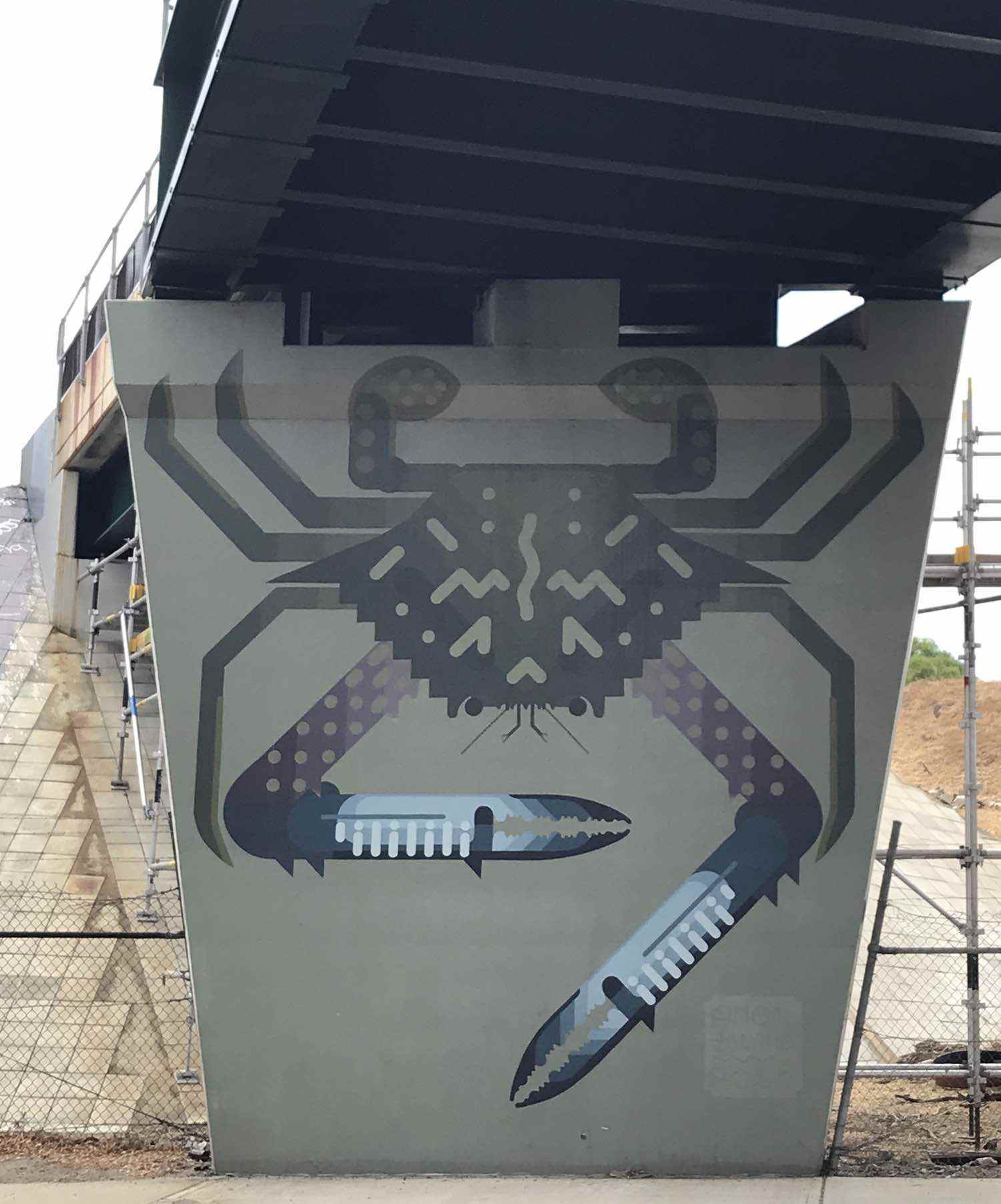 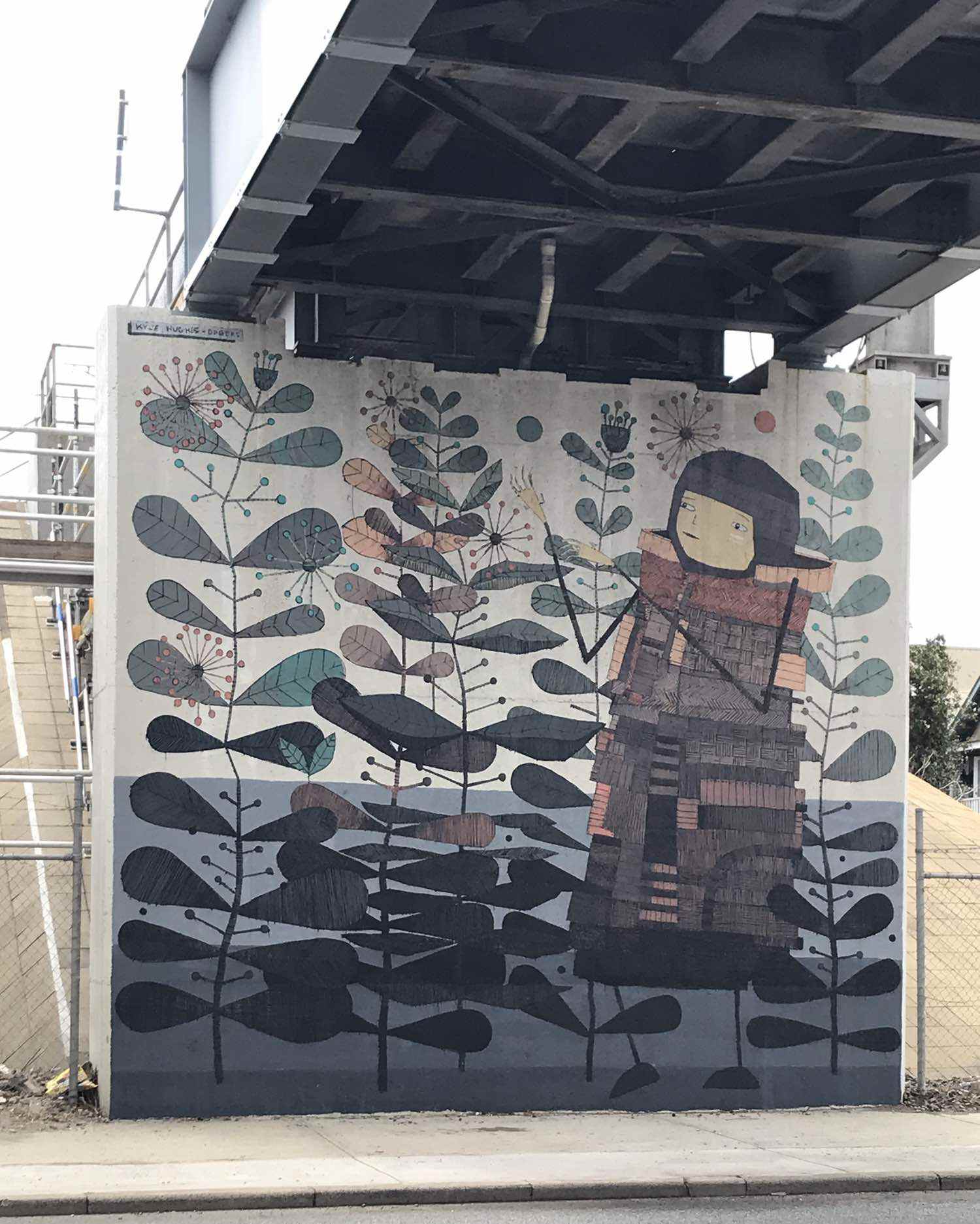 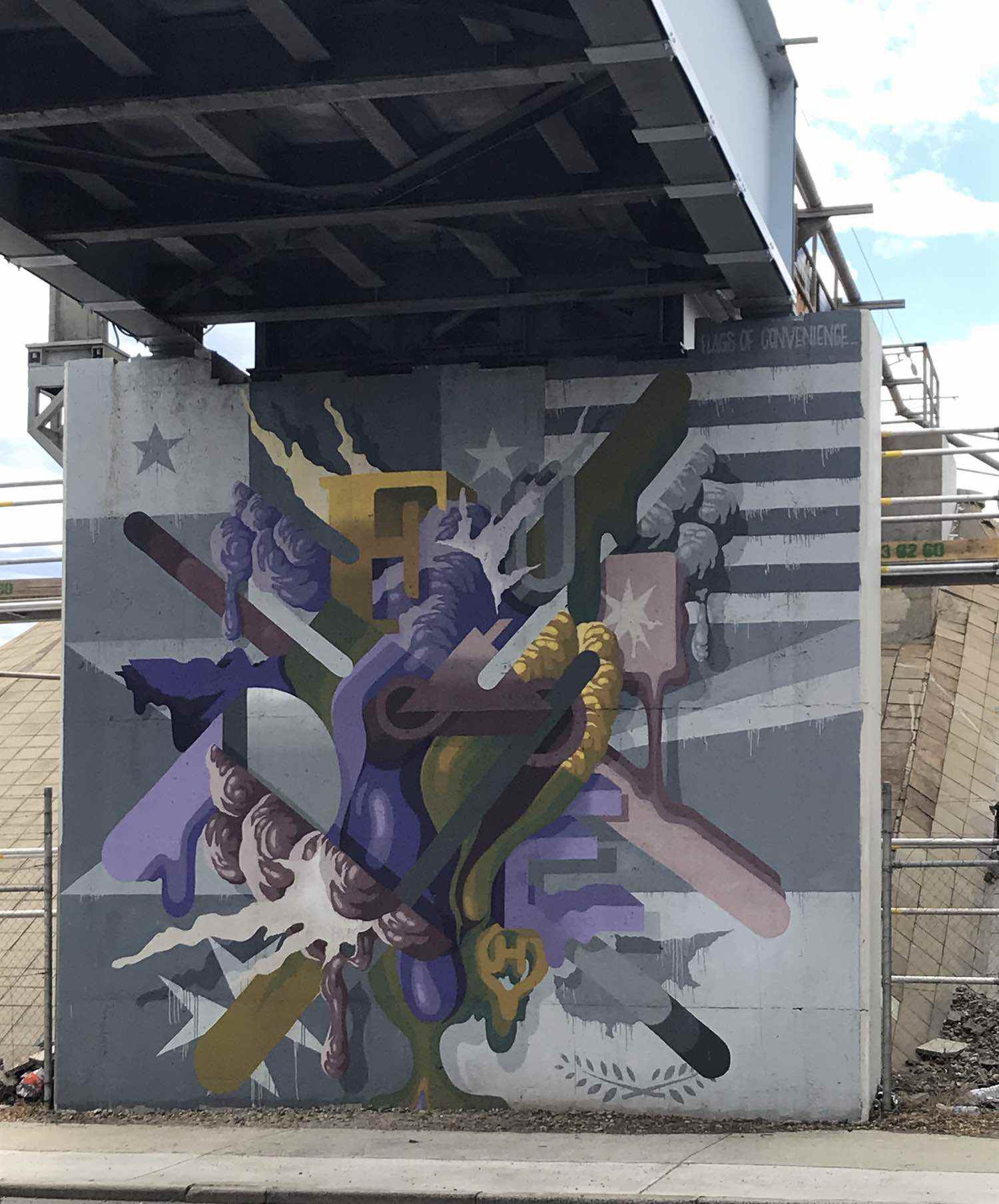 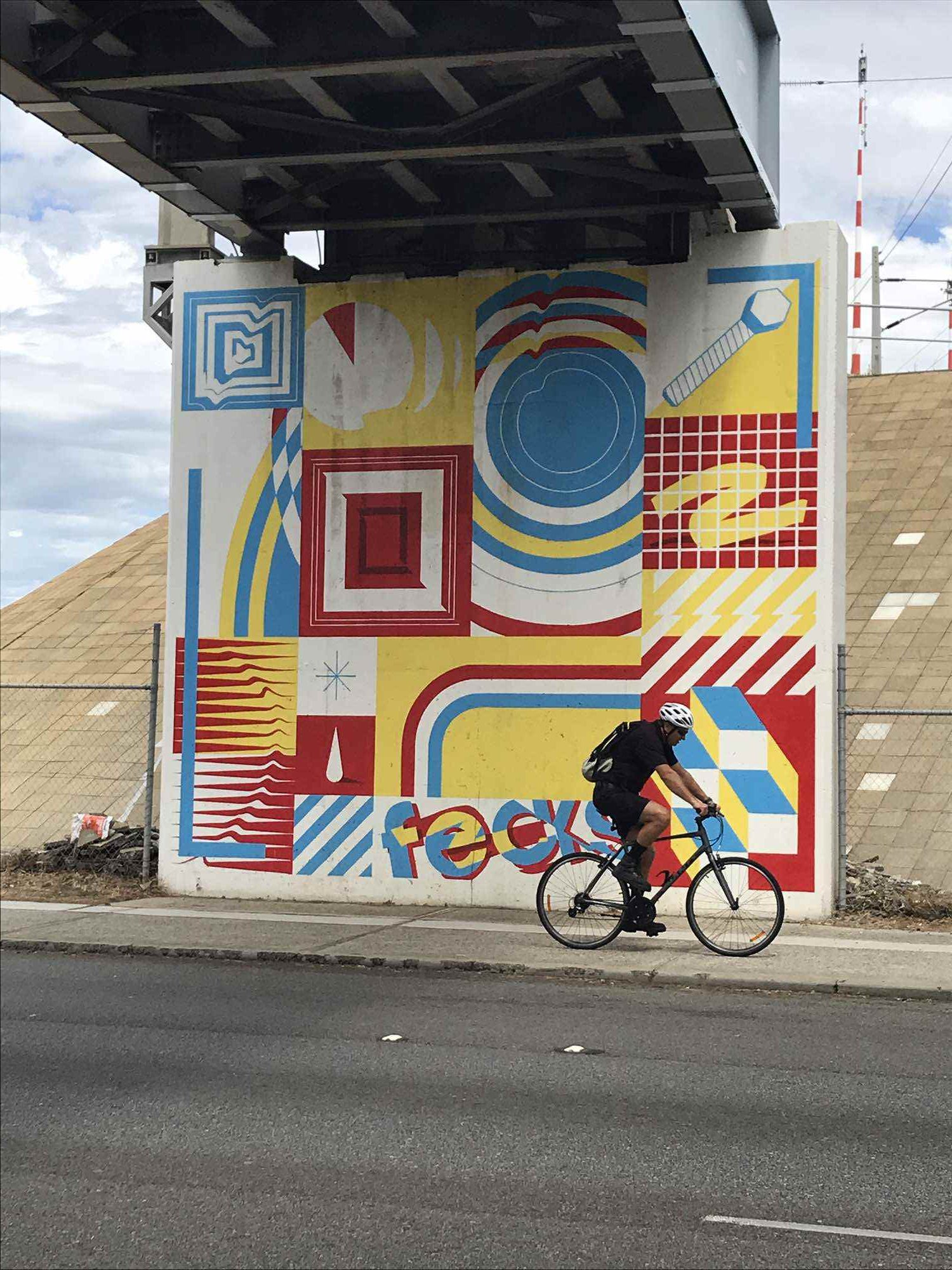 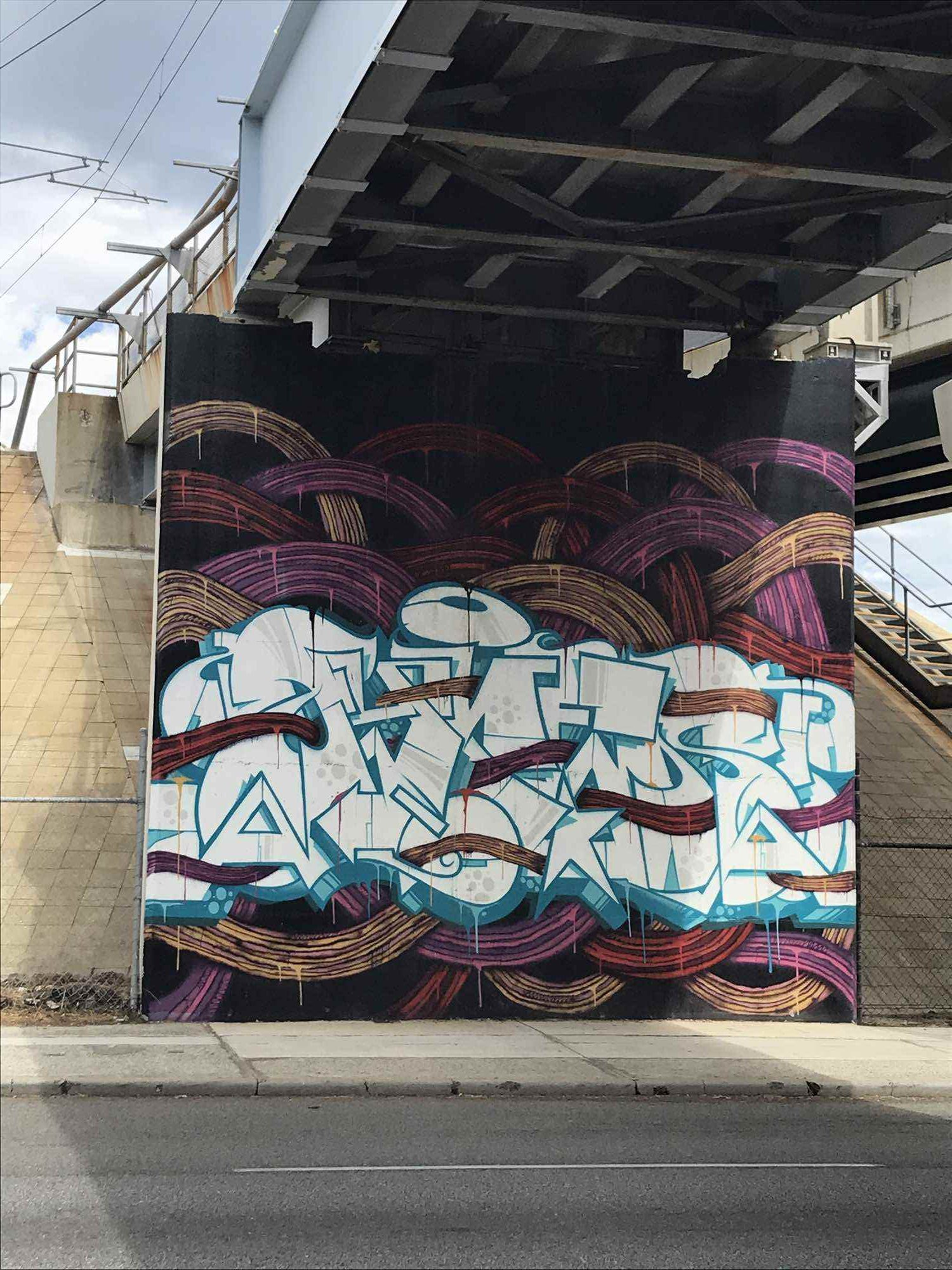 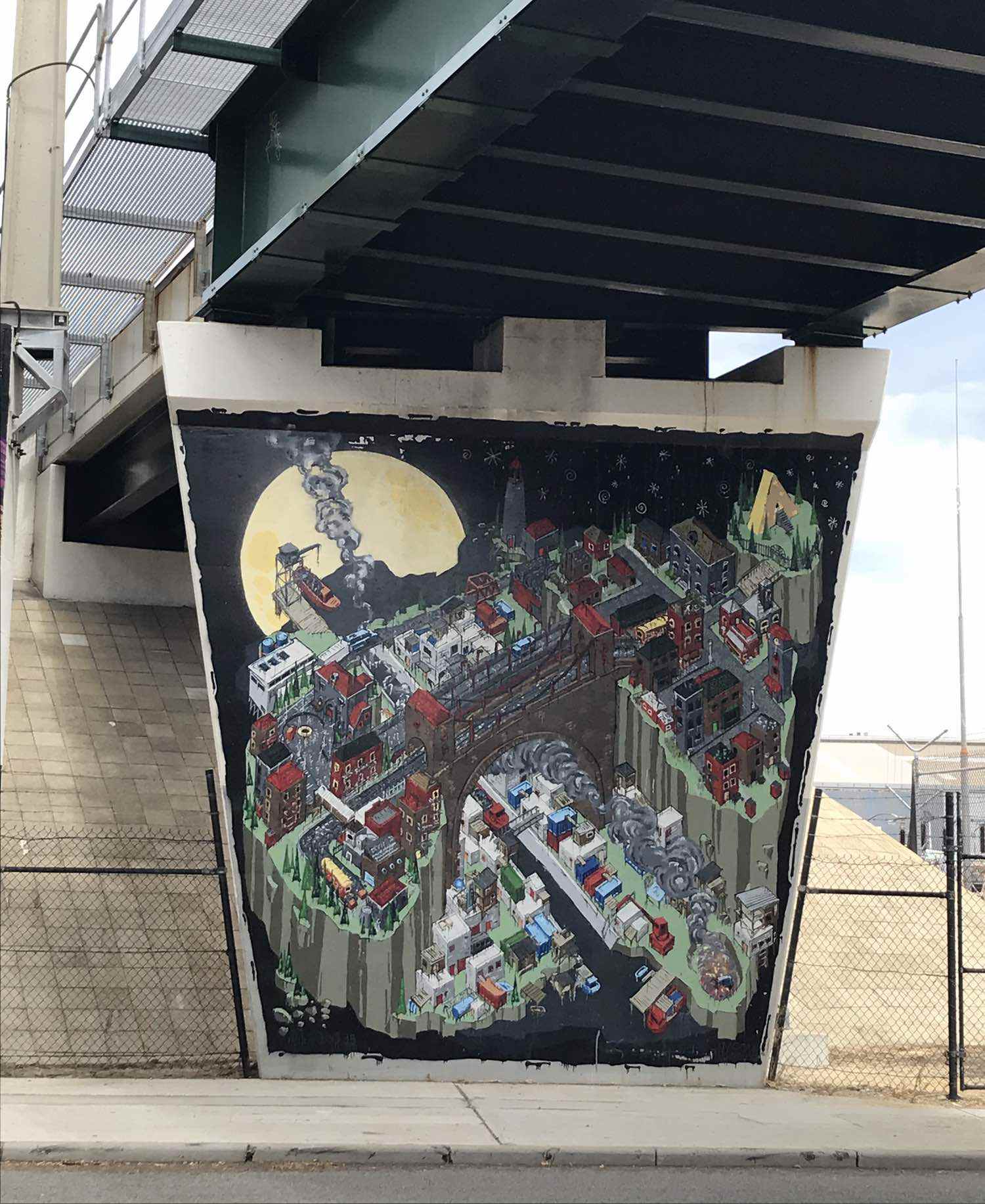 Just beside the pillars is a colourful mural on a large wall facing Tydeman Road. Slavin Architects worked with the City of Fremantle in 2014, and commissioned artist Anya Brock to create this public street art. The building is currently up for rent. 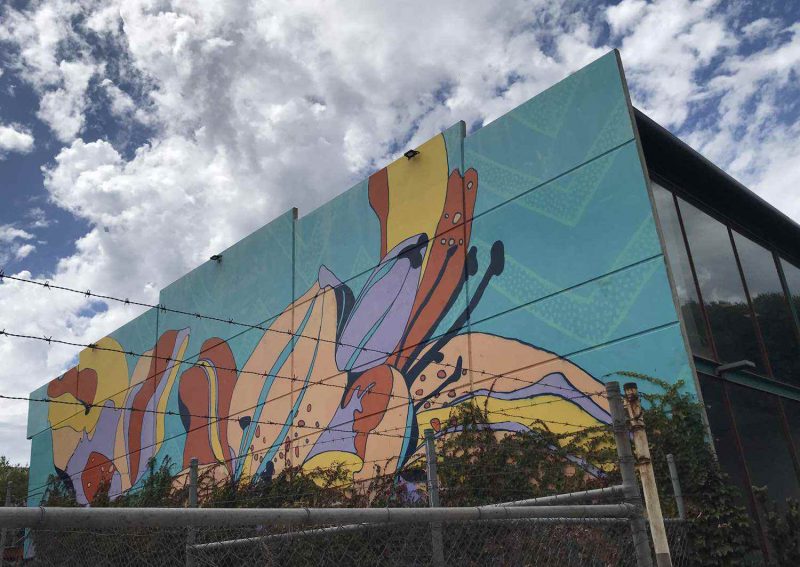 After a coffee stop at Brucetown cafe on Queen Victoria Street, I walk to the Old Bridge Cellars wine shop. It already had art works of fish on one side of the building. In 2018, artist Jacob Butler (Shakey) immortalized what North Freo is all about: beach, dogs and the community. The artwork was sponsored by Gage Roads Brewing, so you will see a few of their beer bottles, the Fremantle cranes, the Dingo Flour Mill and locals with their dogs on the beach in the mural. 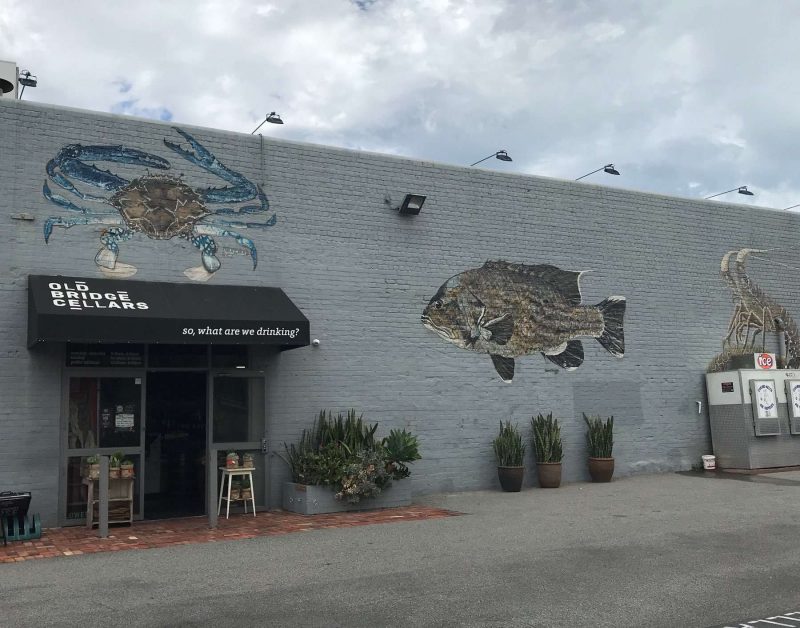 Behind North Fremantle Bowling Club, to the East across Stirling Highway, a large mural covers the back wall of the Community Centre on Thompson Road – you can see it from Stirling Highway. 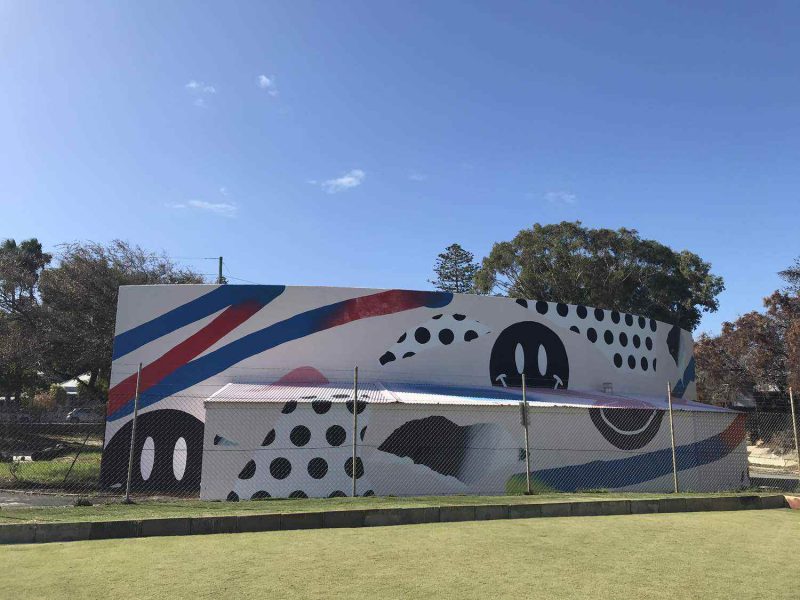 Alice Ford also painted Marty the Fish and his trusted scuba divers on the sidewall of the DSLD office on 87 Stirling Highway. I loved this mural, but since writing this piece, it has been removed. The building is being renovated. The transient nature of street art means that art works change regularly. 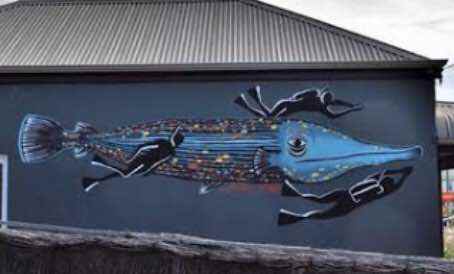