On ANZAC Day, I looked across the Indian Ocean towards Rottnest Island from the Leighton Gun Battery, high on Buckland Hill. 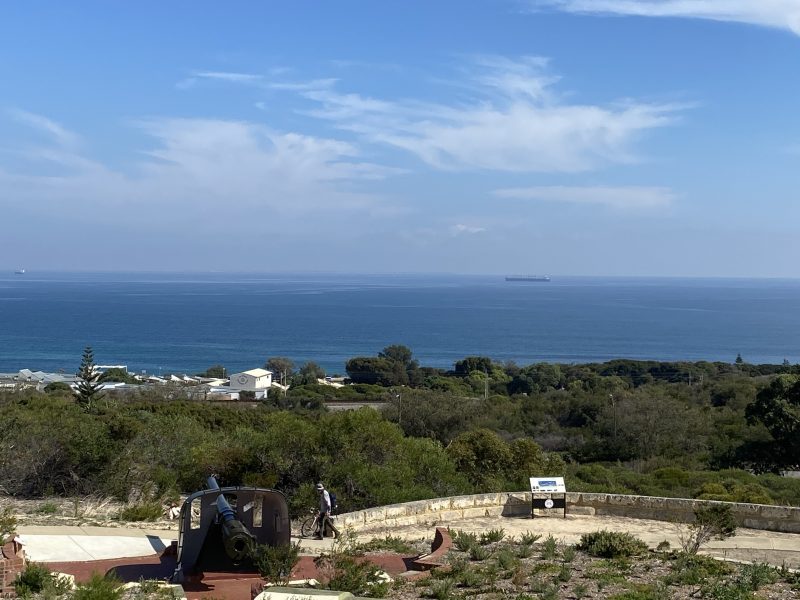 From 1935 to the end of World War 2, there were no tourists on Rottnest Island as Australia prepared against impending air and sea raids. It was decided to make Rottnest the site of the main link in a series of gun emplacements called Fremantle Fortress. There were 2,500 army personnel on the island during those years, including 250 women. Over the ANZAC Day long weekend just gone, tourists were evacuated from Rottnest Island for a very different reason – a snap 3-day COVID lock down in the Perth Metropolitan and Peel Regions.

As you pass by Buckland Hill, on your left as you drive along Stirling Highway to Fremantle, with Leighton Beach to your right, you notice a large sign, in the shape of a gun, with WW2 Tunnels written on it. 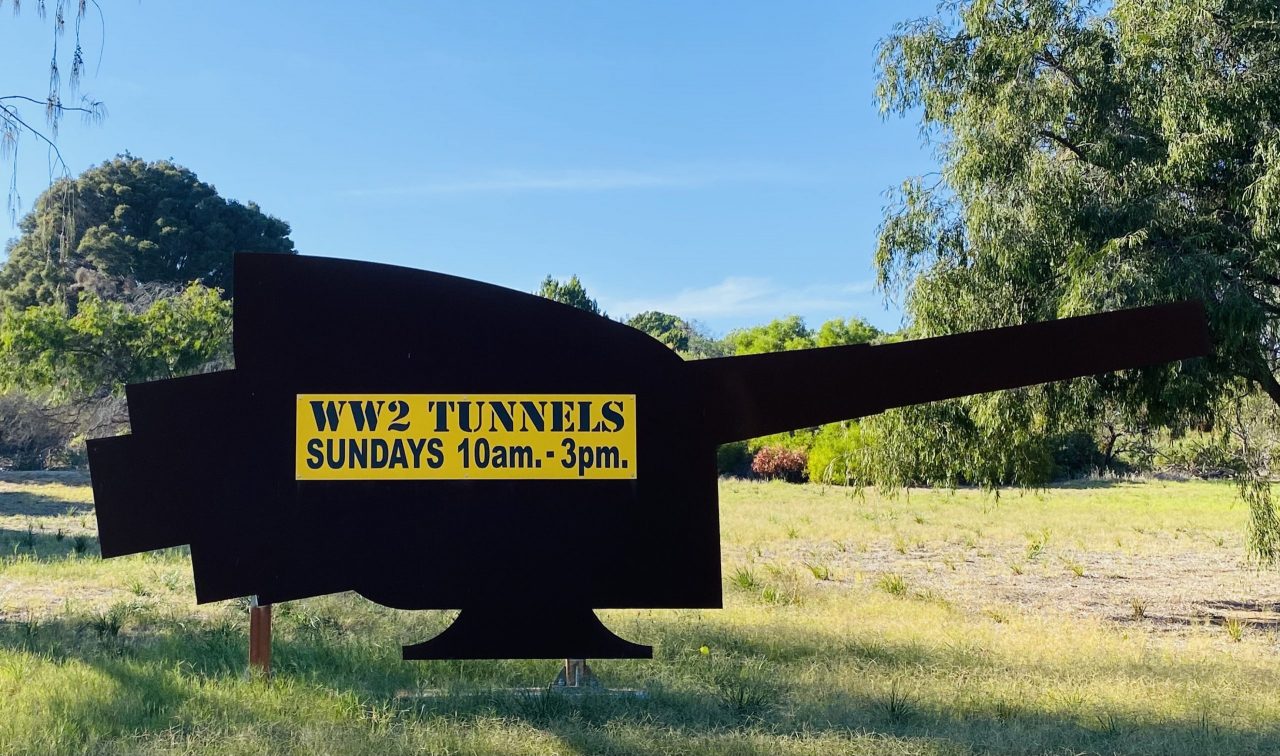 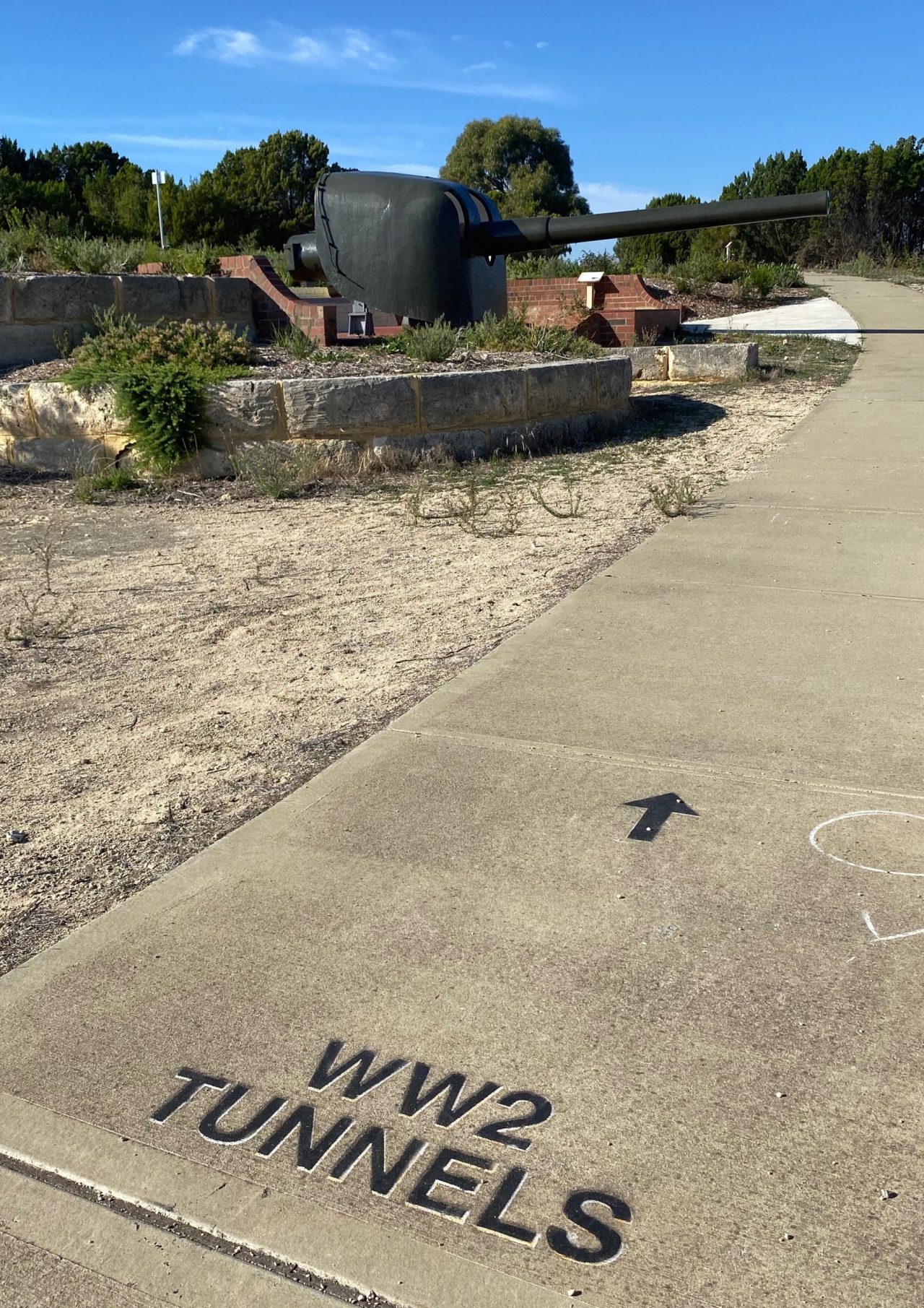 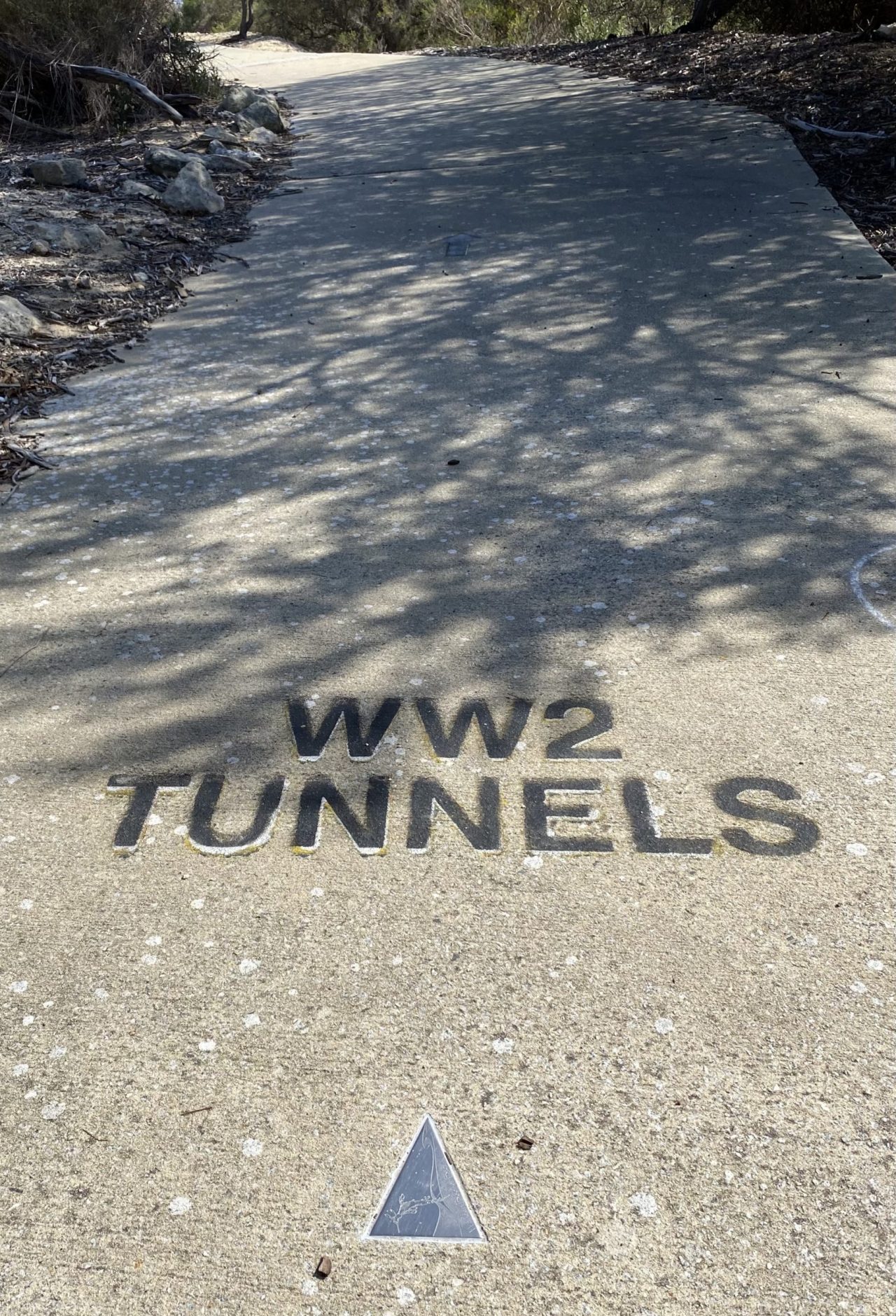 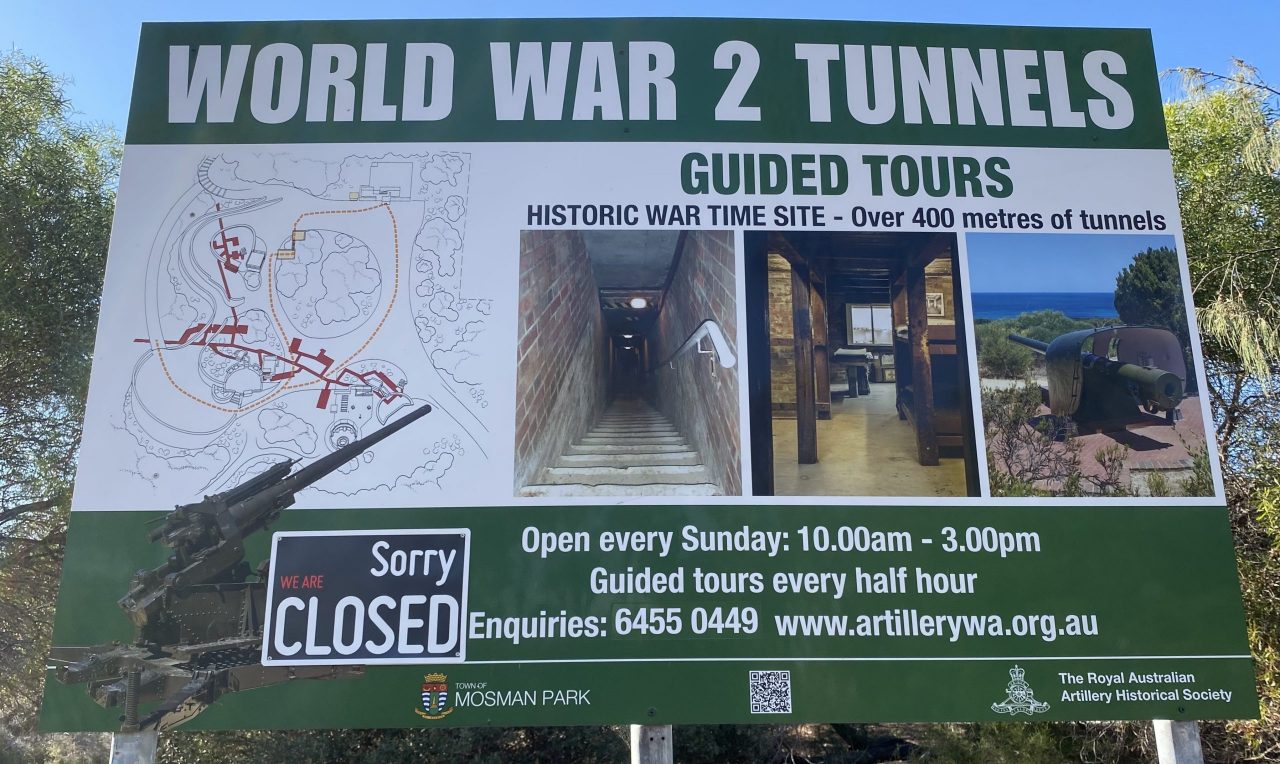 Leighton Gun Battery was once an artillery site, with guns and searchlights that were serviced by a web of tunnels under the hill. This battery formed a major part of Fremantle Fortress. Other components of the Fortress, in addition to Leighton and Rottnest, were at Garden Island, Port Peron, Fremantle and Swanbourne. 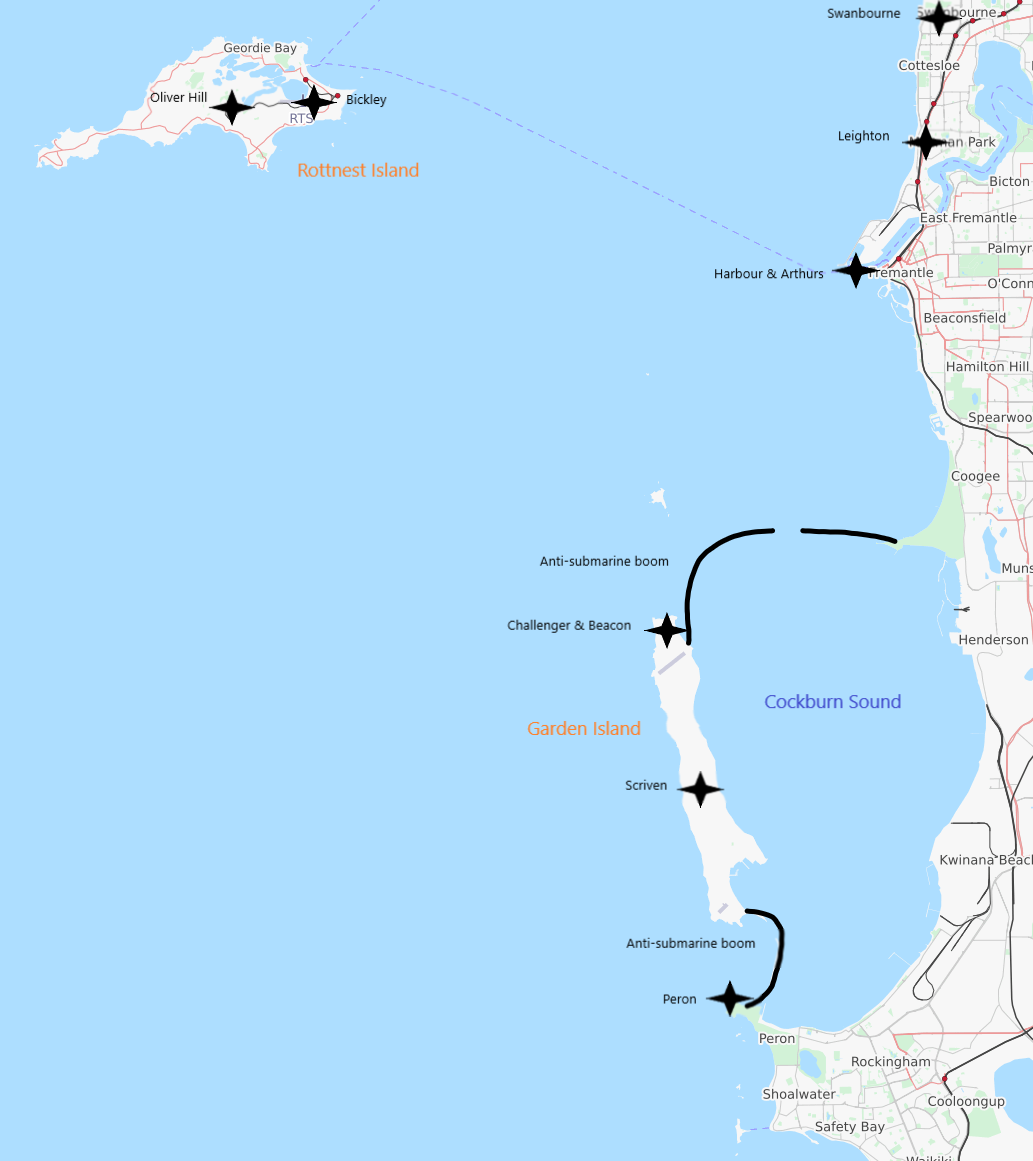 The battery at Leighton, on Buckland Hill, is now run as a heritage museum. Every Sunday members of the historical society open the battery and tunnels for public tours. There are three guns on display: a large 6-inch Coastal Defence Gun with shield; a 40mm Bofors Light Anti-aircraft Gun; and a 3.7-inch Heavy Anti-Aircraft Gun. 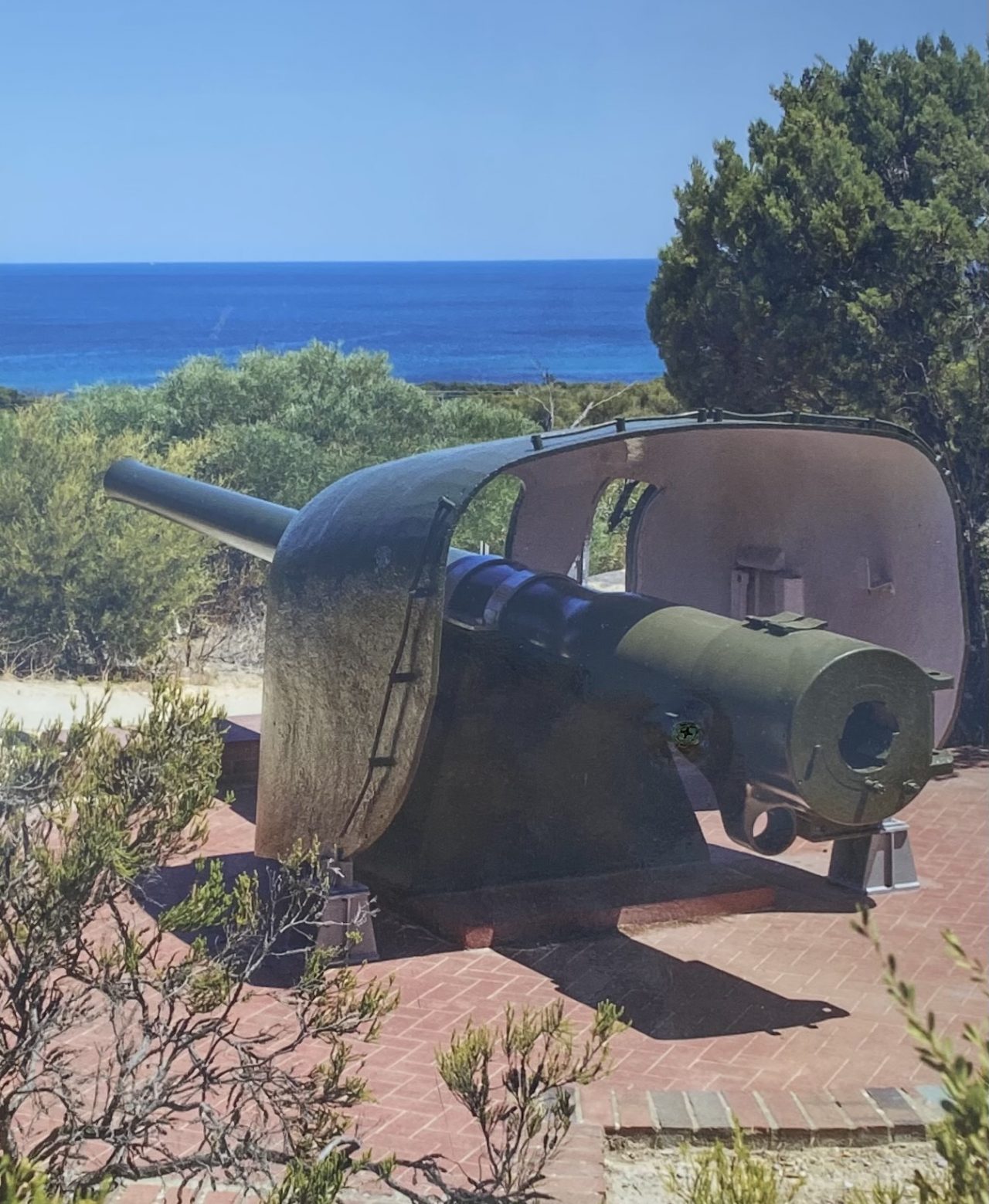 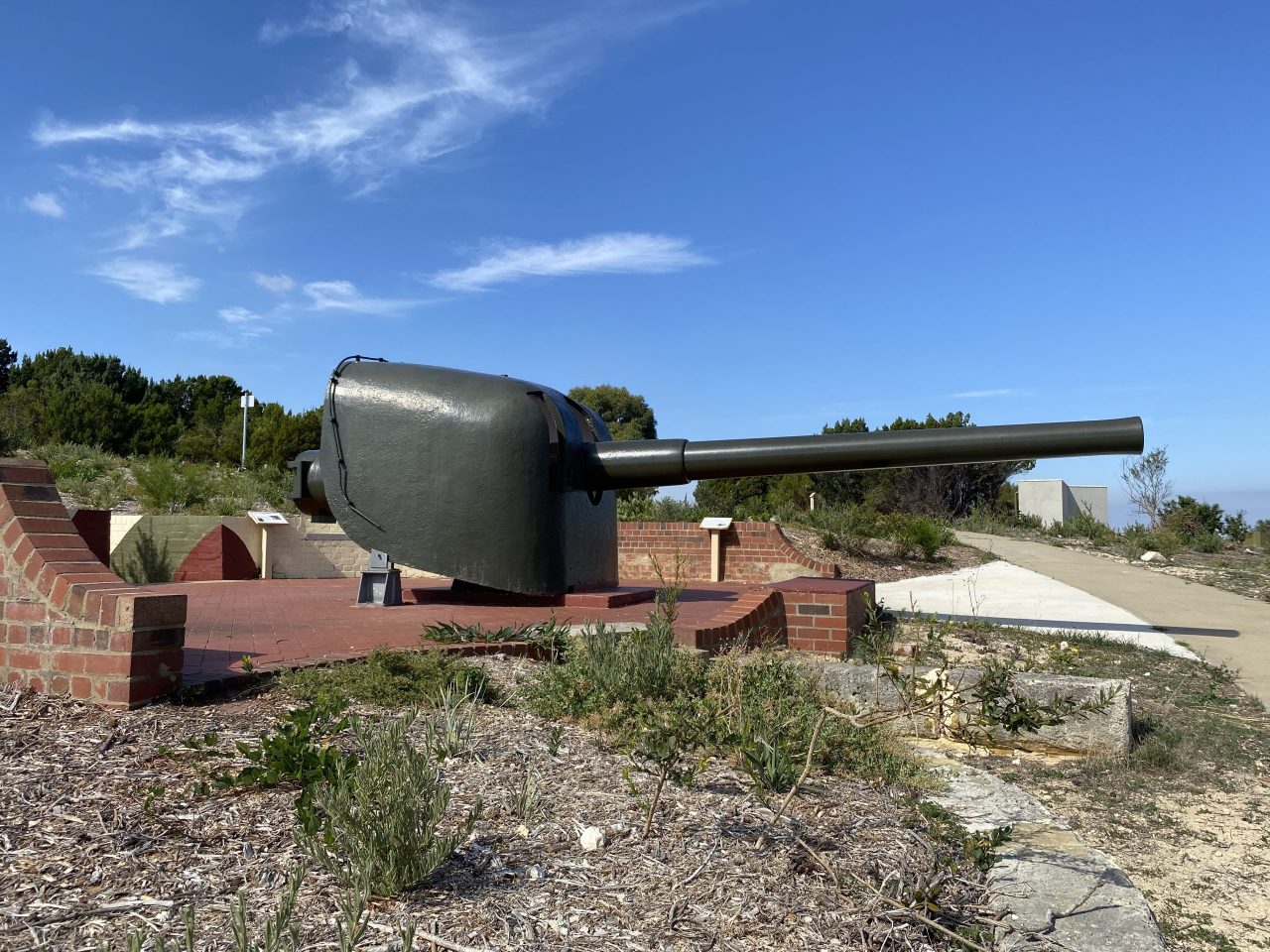 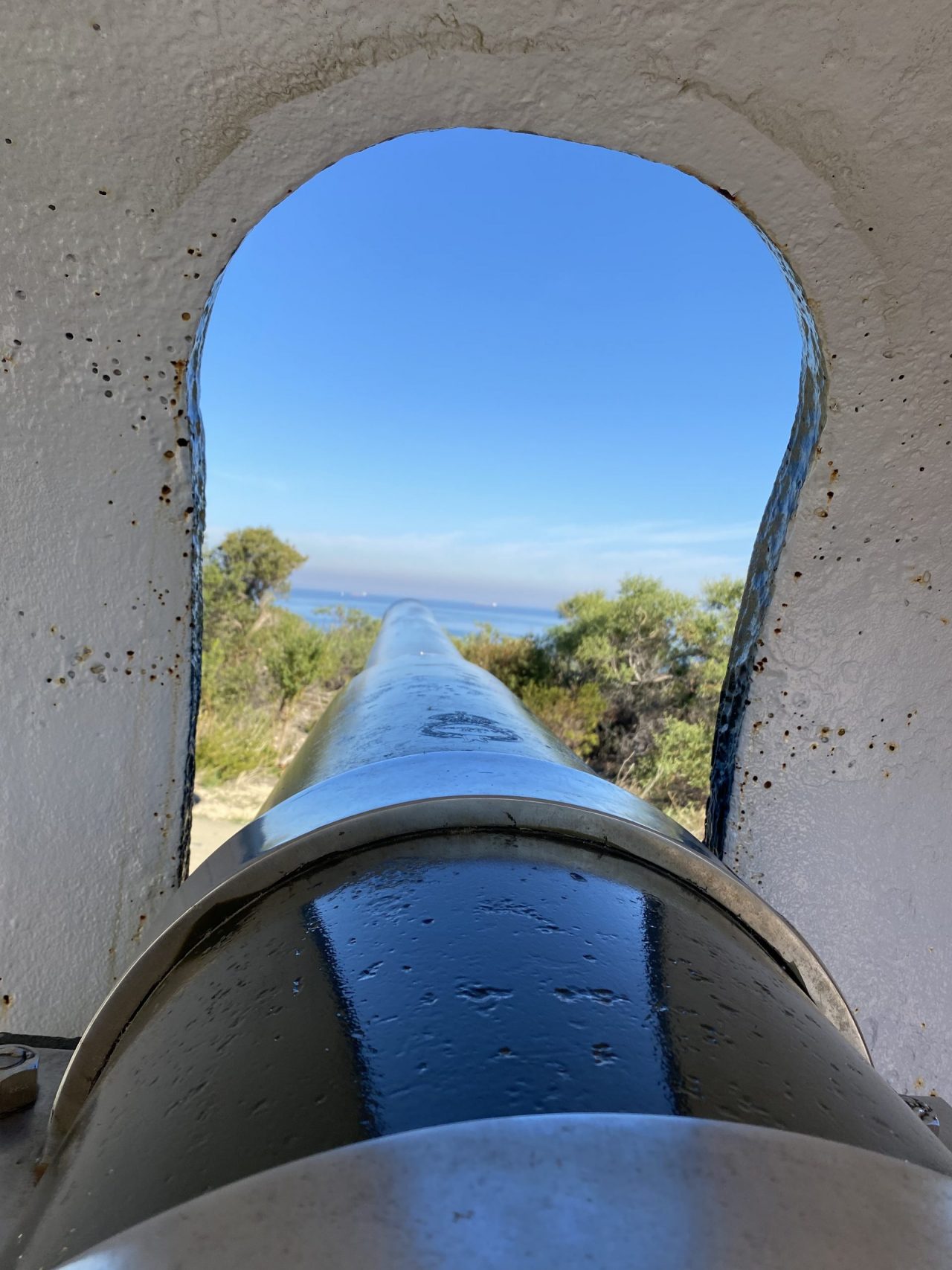 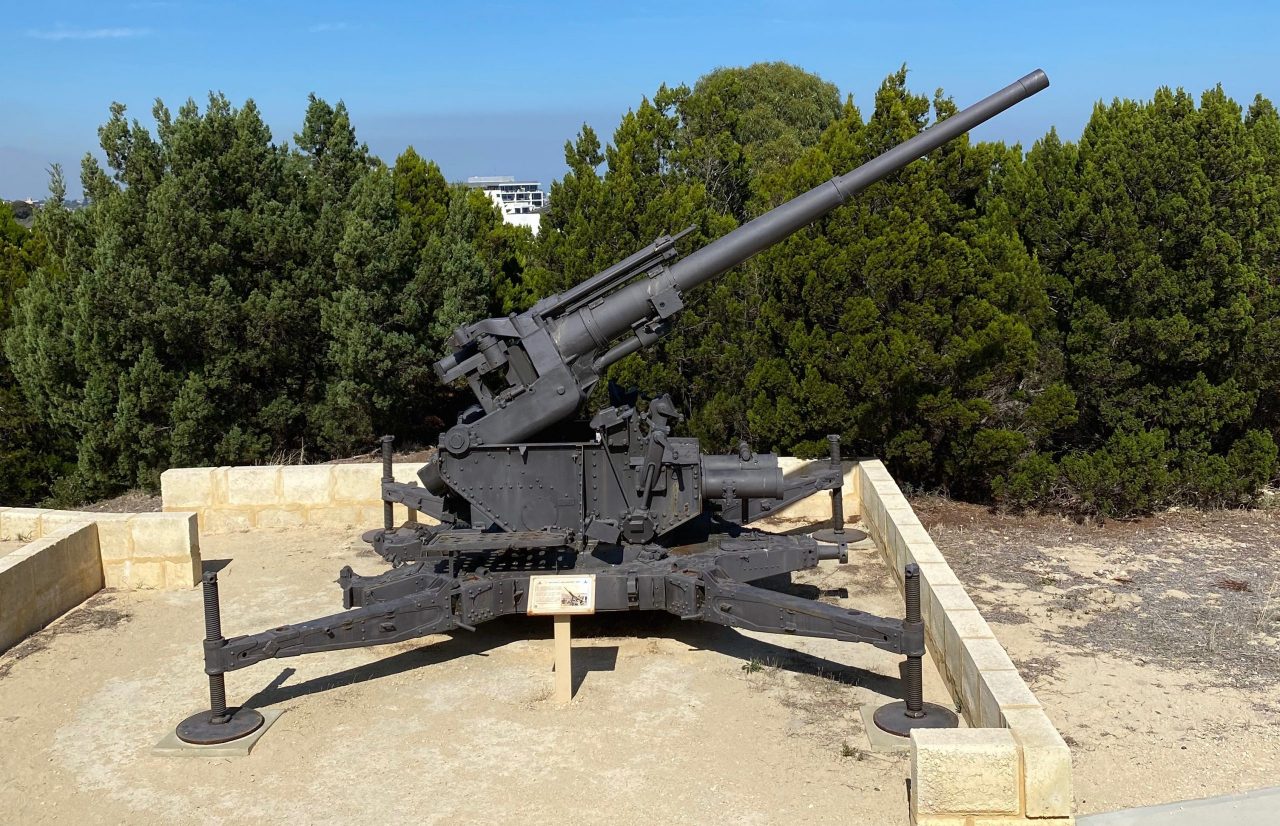 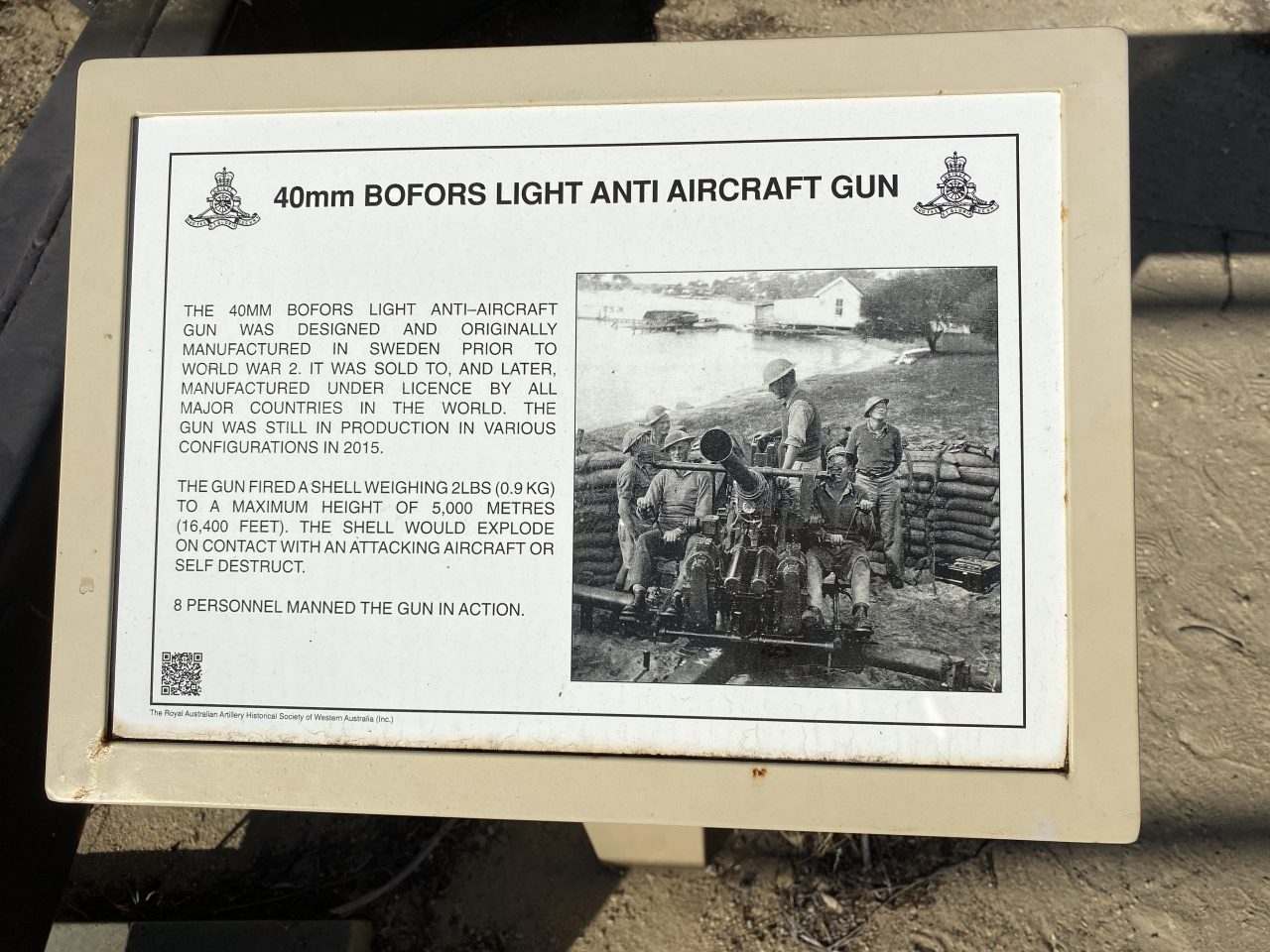 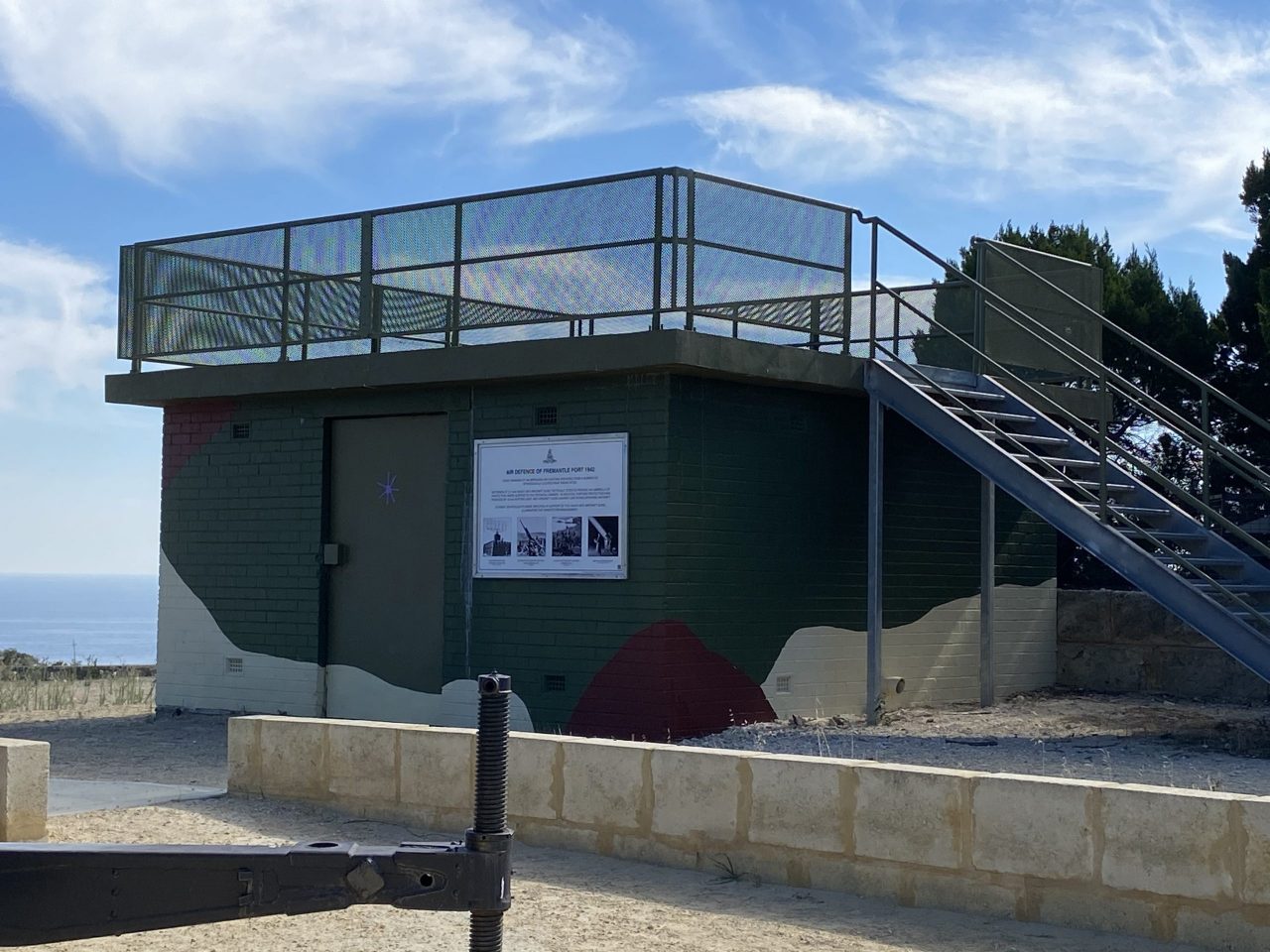 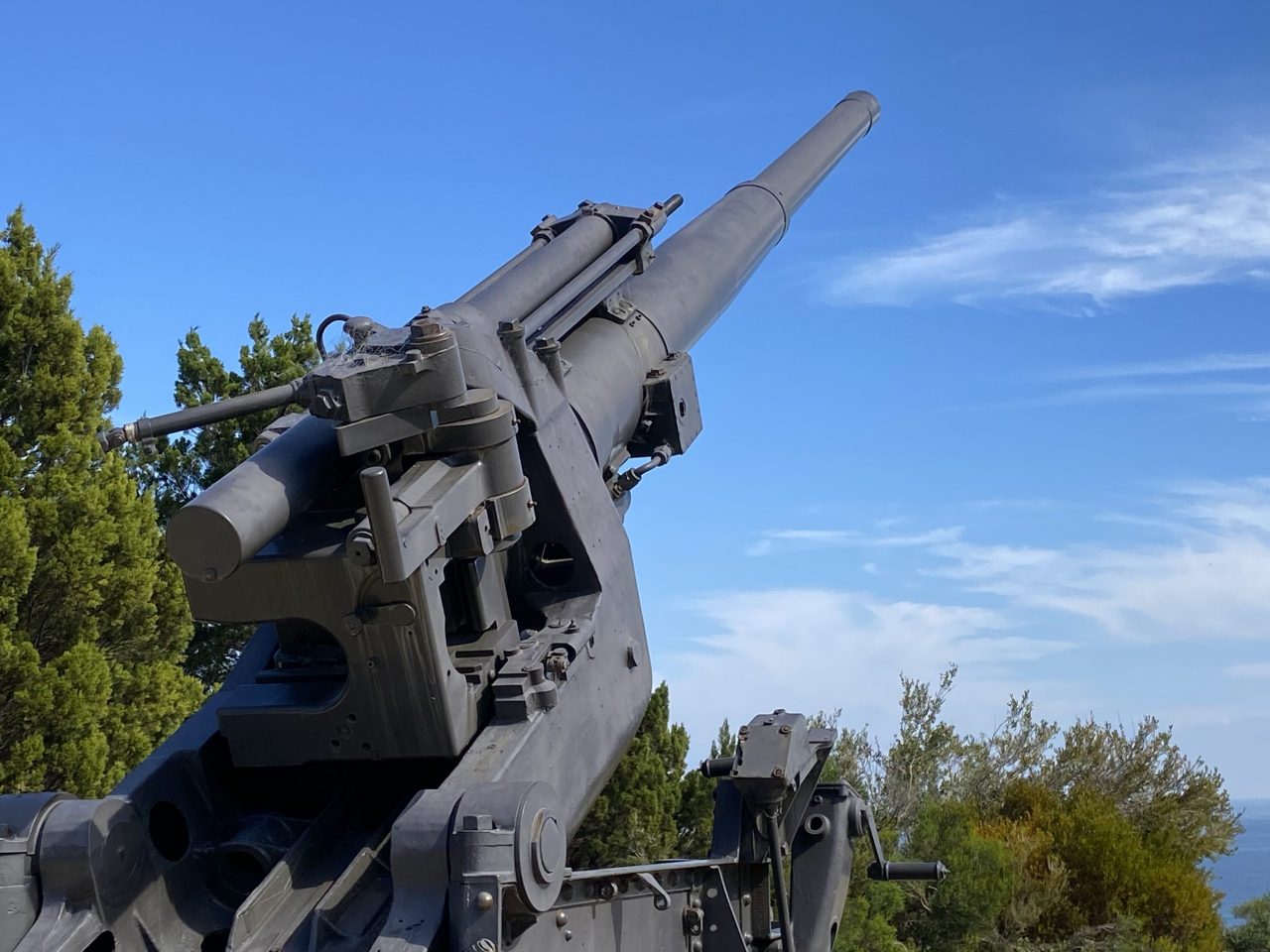 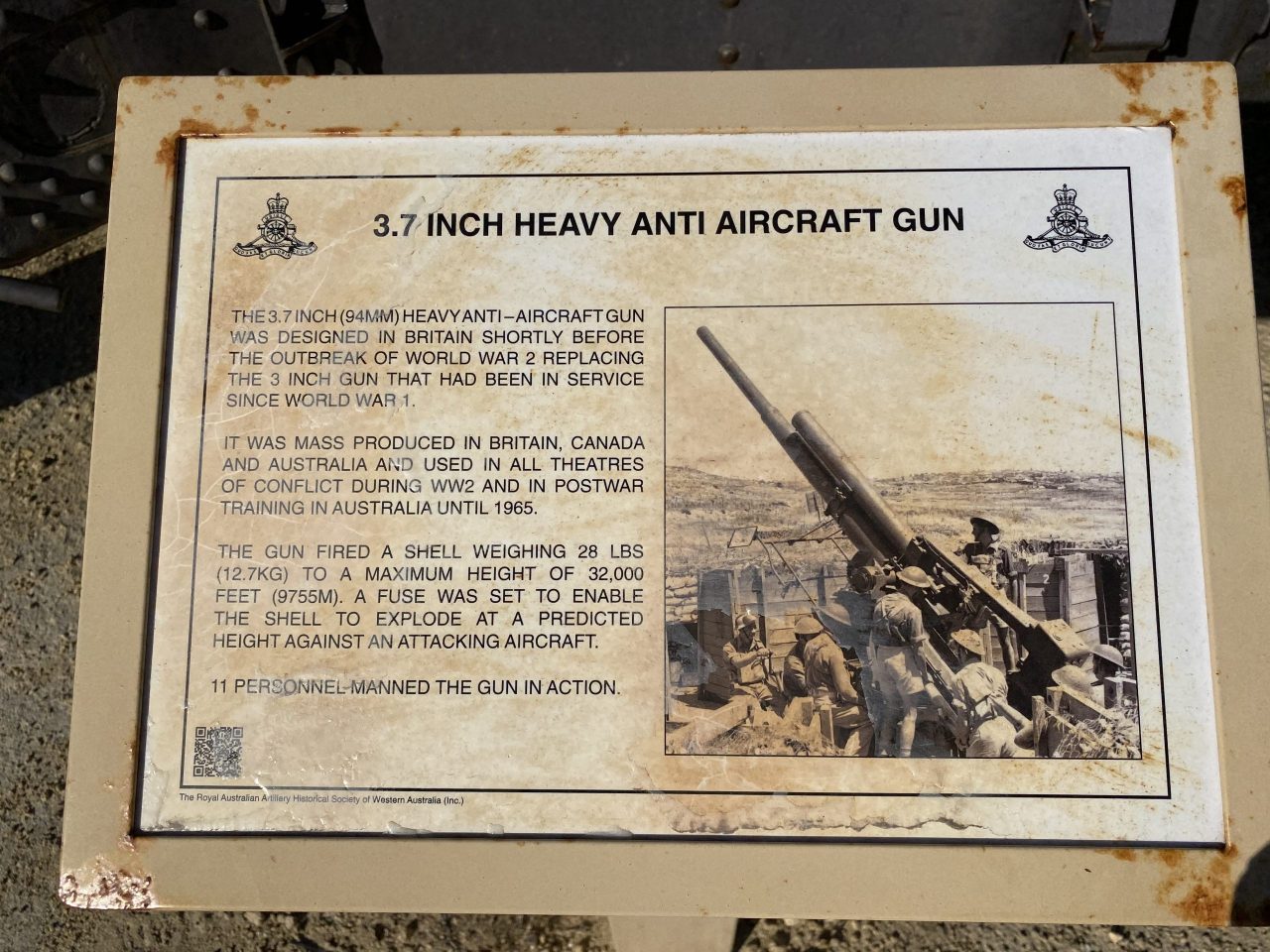 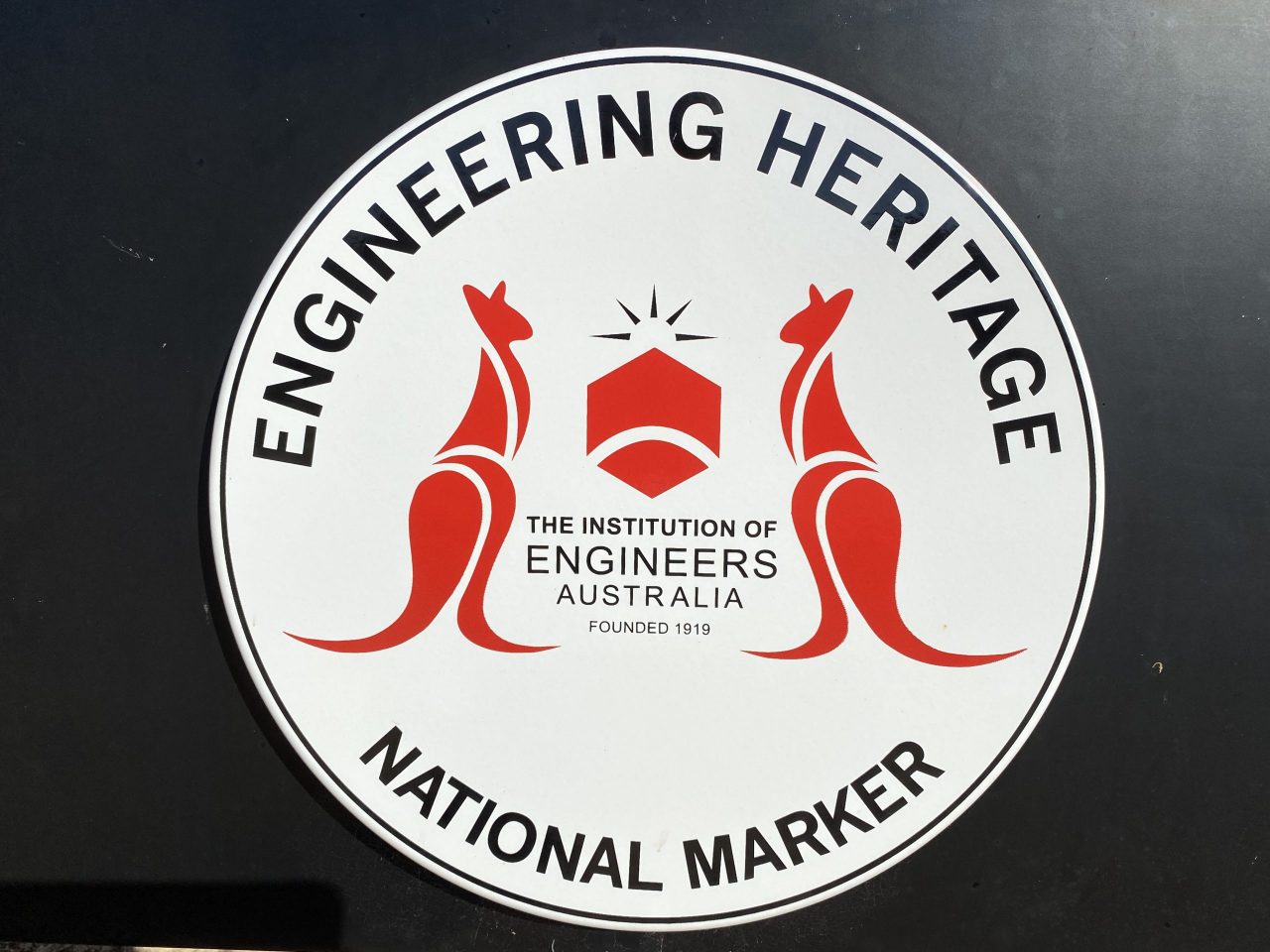 Today I’m the only person here, so I have time to wander around the guns, admire the view and think of those who manned the battery, those who went to war, and those who paid the ultimate sacrifice.

In 1931, Japan invaded Manchuria and withdrew from the League of Nations. Australia was under the threat of war. By 1932, Australia was overhauling its defence plans and, by 1933, a Three Year Defence Program was underway.

Defending vulnerable points on the Australian coastline became a priority. The port of Fremantle needed protection from possible bombardment by ship-borne long-range guns. Upgrading existing batteries and constructing new ones was designed to achieve this.

The original plan for strengthening the defence of Fremantle was to place 9.2-inch guns on Buckland Hill (Leighton), but it was realized that they could not protect Fremantle from enemy cruisers with 8-inch guns. The 9.2-inch guns were subsequently moved to Rottnest Island. Additional 6-inch guns were positioned on Rottnest, Fremantle’s Arthur Head and Swanbourne.

The Rottnest Island batteries complex was completed between 1935-1939, becoming operational just before the outbreak of WW2. The main components were the installation of two ex-naval 9.2-inch guns at Oliver Hill; two 6-inch guns at Bickley Point; permanent army Barracks at Kingston, to house military personnel and their families; a railway to service the batteries; look out posts; radar towers and a signaling post. The island’s airstrip and jetty were upgraded. The two Oliver Hill 9.2-inch guns are the only two remaining in Australia.

When Nazi Germany invaded Poland in September 1939, WW2 was declared. The batteries at Rottnest Island, Arthur Head and Swanbourne were operational. The Leighton tunnels and a 3.7-inch Heavy Anti-Aircraft Battery were built with great urgency after the Japanese attack on Pearl Harbour on 7 December 1941.

At this stage Fremantle had the largest Submarine Base in the Southern Hemisphere, hosting British, American and Dutch submarines.

Fremantle had another 3.7-inch Heavy Anti-Aircraft Gun Station located at Skinner Street, where the John Curtin College of the Arts Sports Oval is now located.

War came to Australian shores with the bombing of Darwin and Broome in 1942. Two heavy 6-inch guns were relocated from the Arthur Head Battery to Buckland Hill. These guns required a crew of 13. They could fire a 45-kilo armour-piercing projectile up to 13 kilometres. An observation post was the nerve centre for the 6-inch guns. One of these guns is now on display.

The observation post was staffed around the clock to keep watch for enemy ships. Women from The Australian Women’s Army Service undertook much of the work at Buckland Hill. At night searchlights were deployed in support of the heavy anti-aircraft guns, illuminating the targets for engagement.

By 1943, the Port of Fremantle was protected to the north and south by a ring of guns: 18 long, medium and short-range guns and 40 heavy anti-aircraft guns. The Fremantle Fortress provided the most heavily gun-defended port in Australia during WW2.

Two tunnel entrances lead to a 300 metre long complex of tunnels and rooms, up to 10 metres deep beneath Buckland Hill. These tunnels were excavated through solid limestone rock. The tunnels supported the operation of the two 6-inch Coast Defence guns and four 3.7-inch Anti-Aircraft Gun Emplacements on the surface. 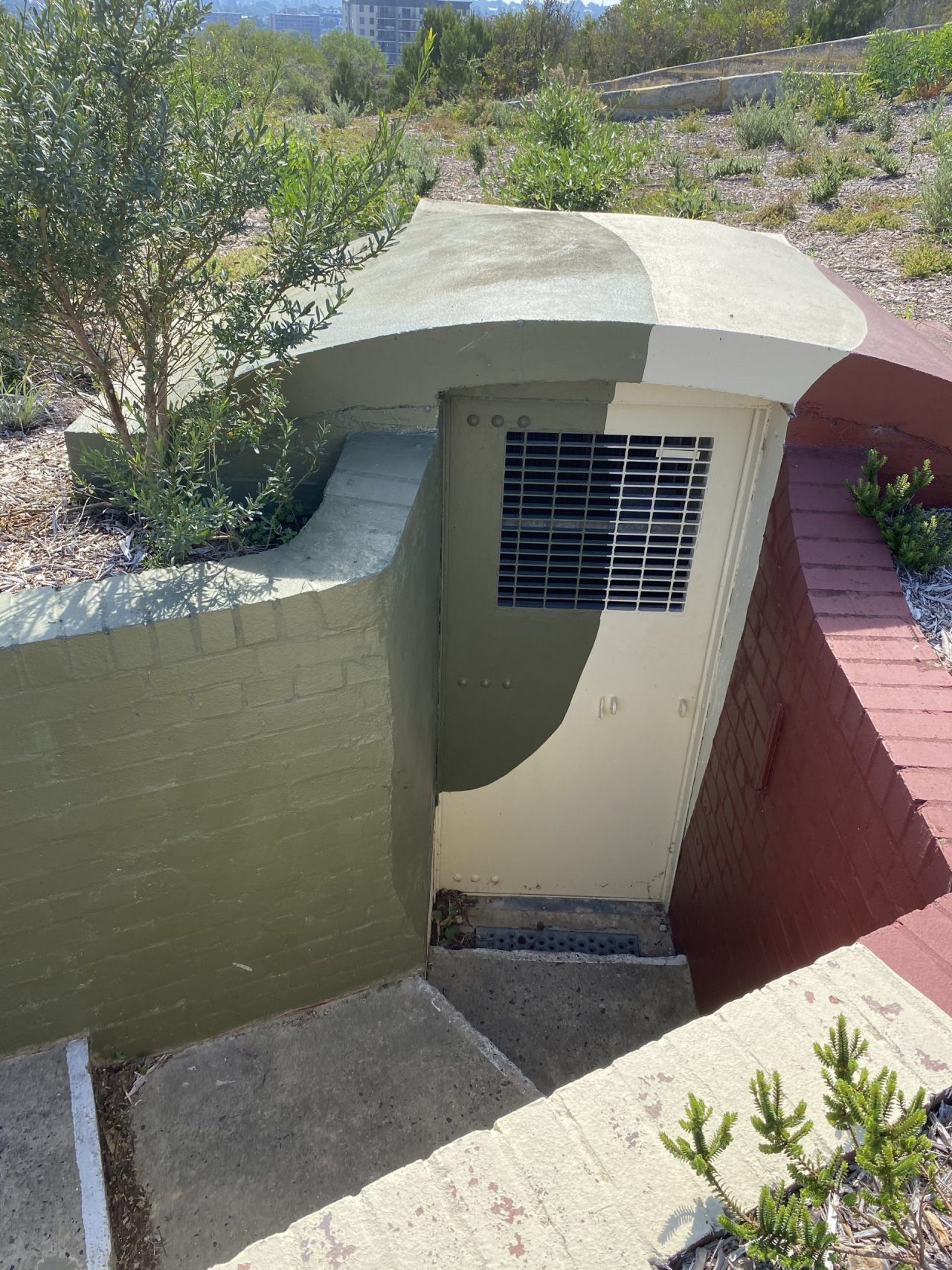 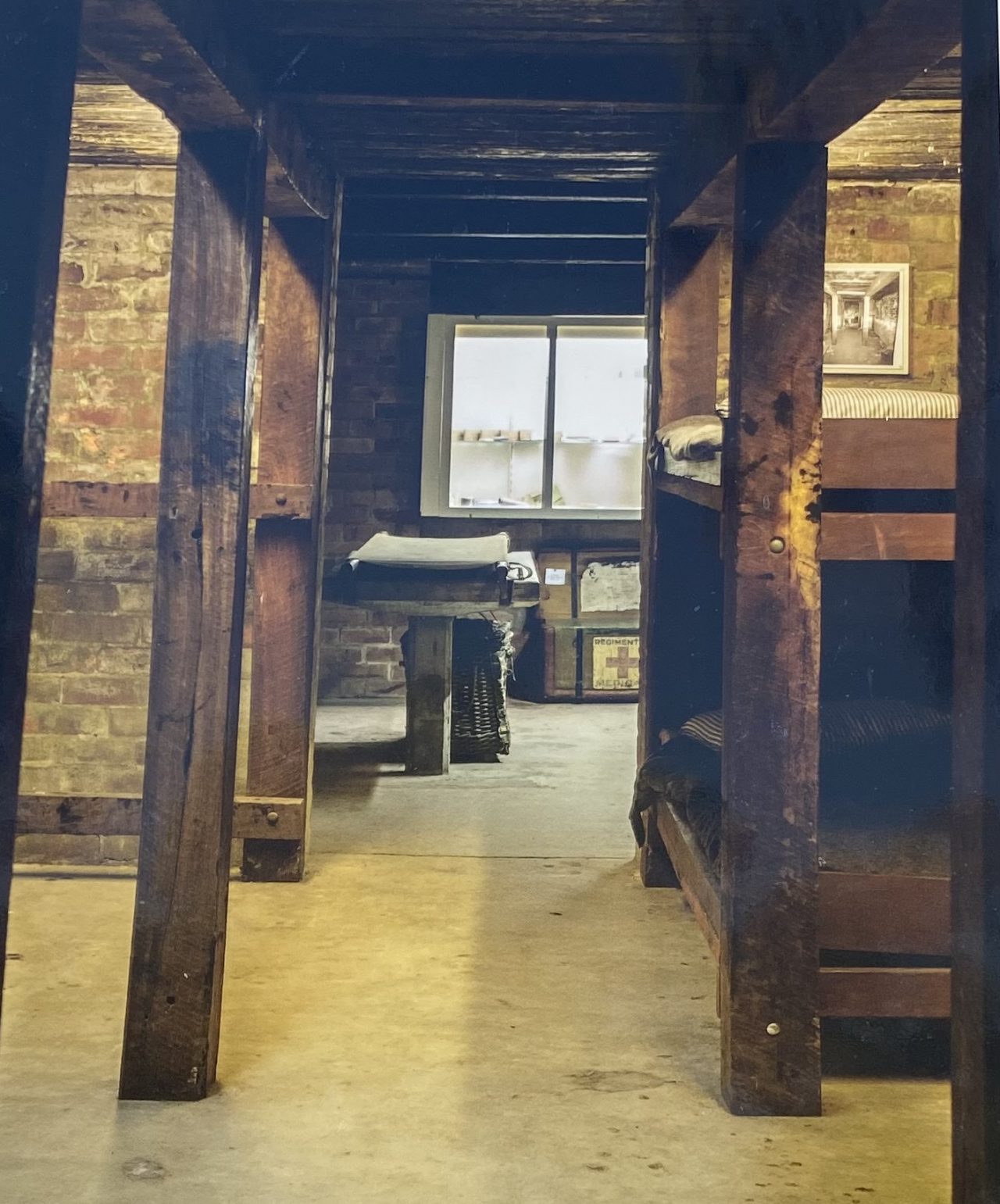 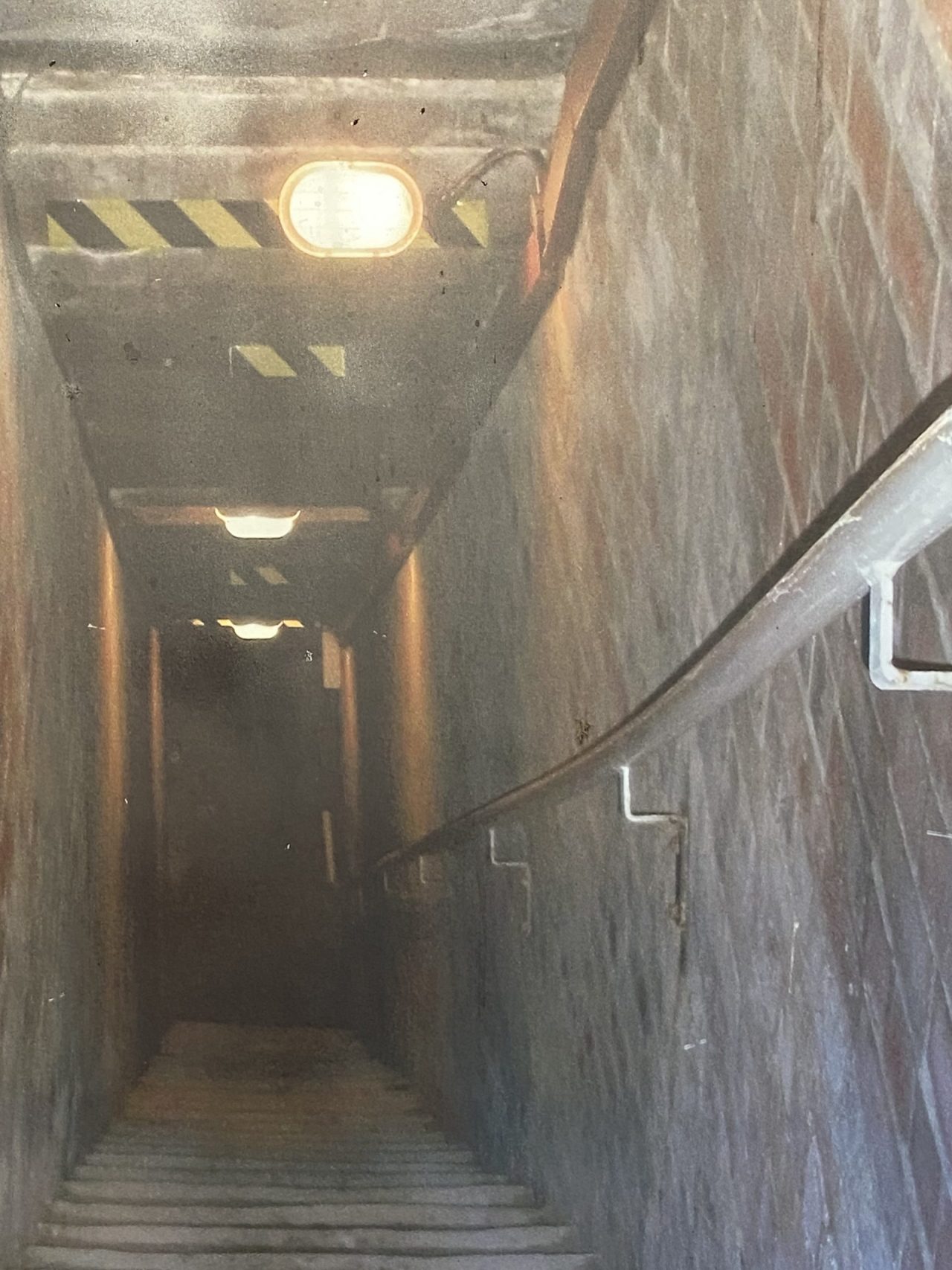 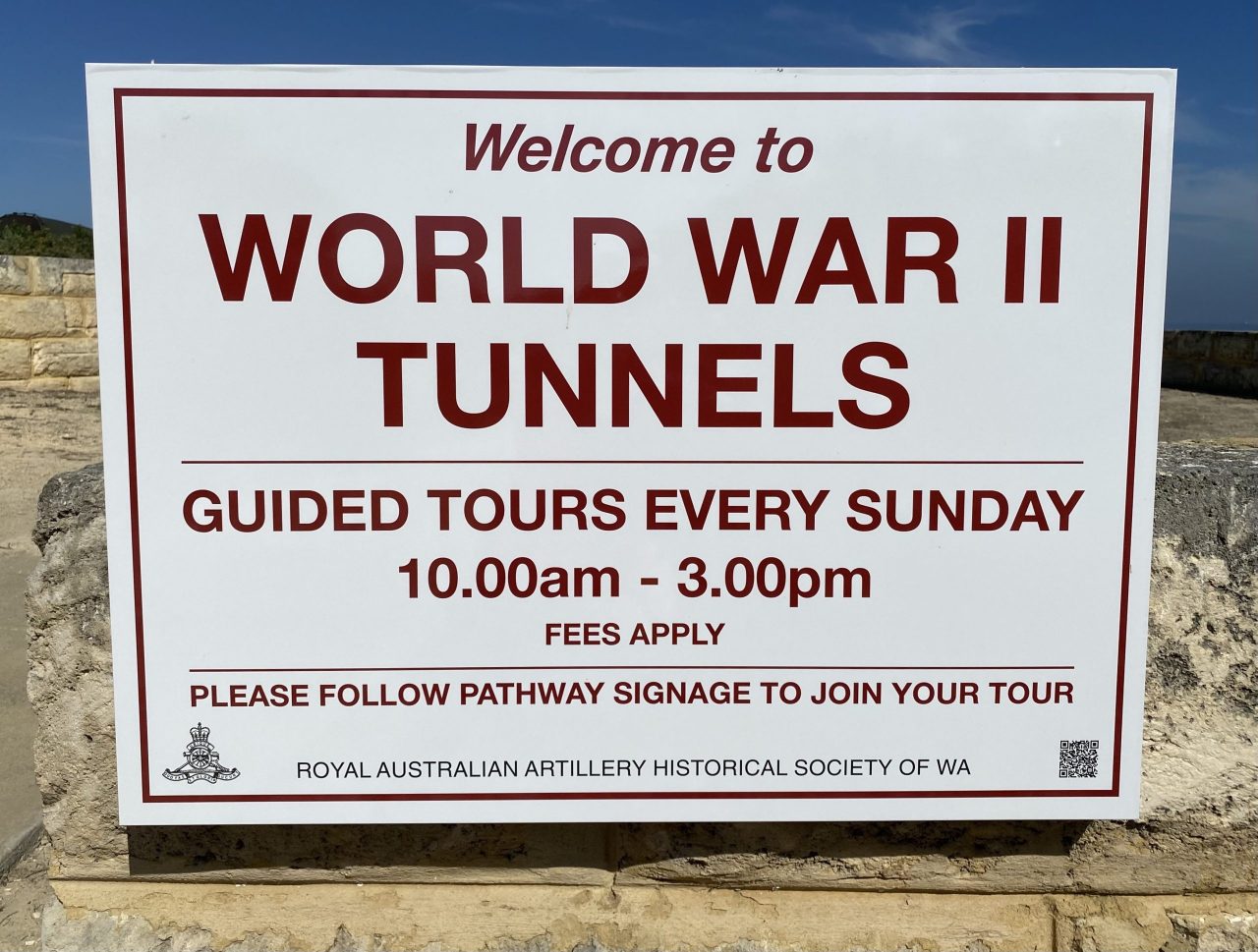 The tunnels also had ammunition storerooms, rest areas for gun personnel and a command post. The tunnels had separate bunk beds for men and women.

The Leighton Battery became operational in 1943 as an ‘examination’ battery to establish the bona fides of ships arriving in Gage Roads. When practice shots were scheduled, the children at North Fremantle State School had the day off! 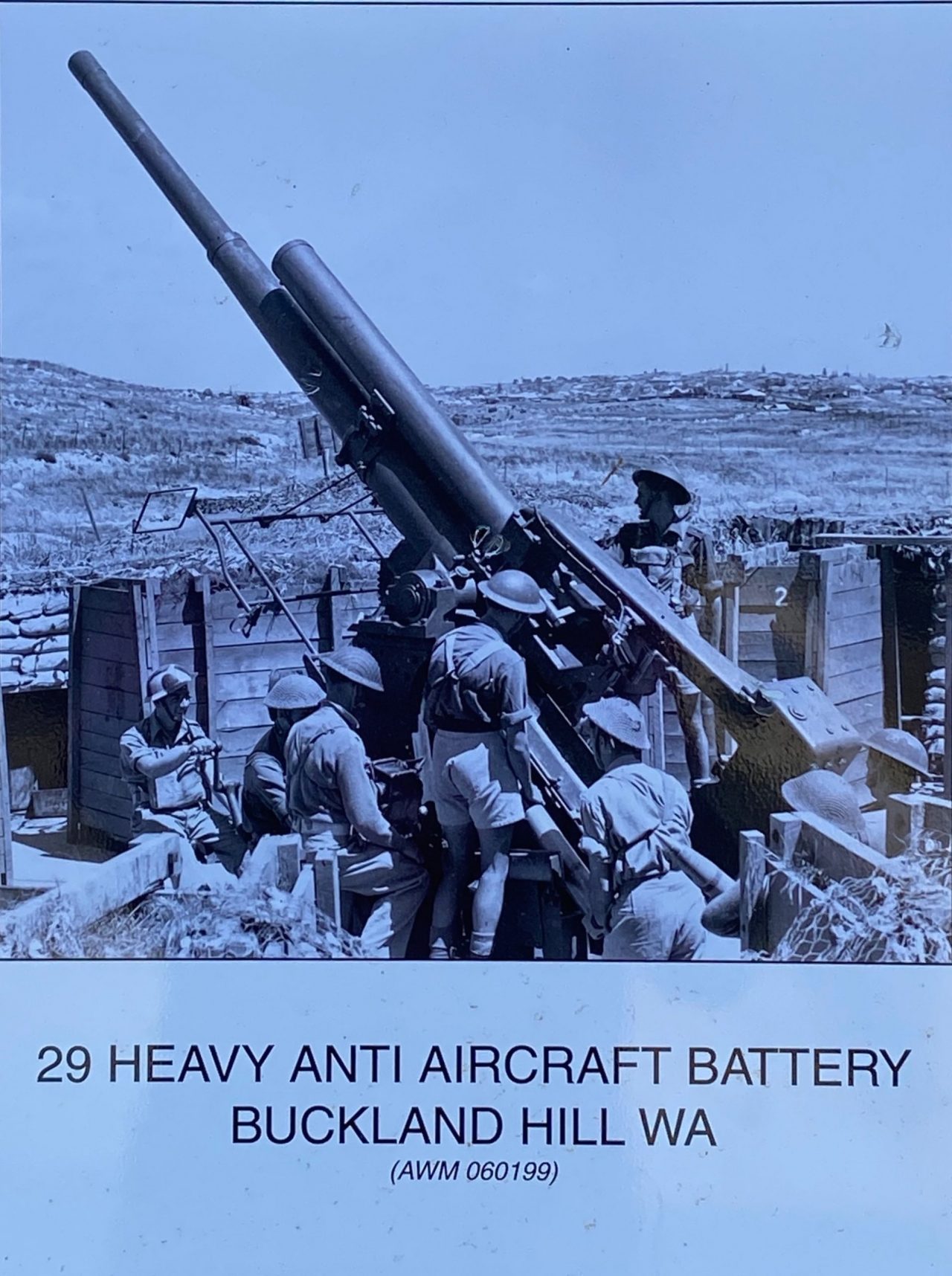 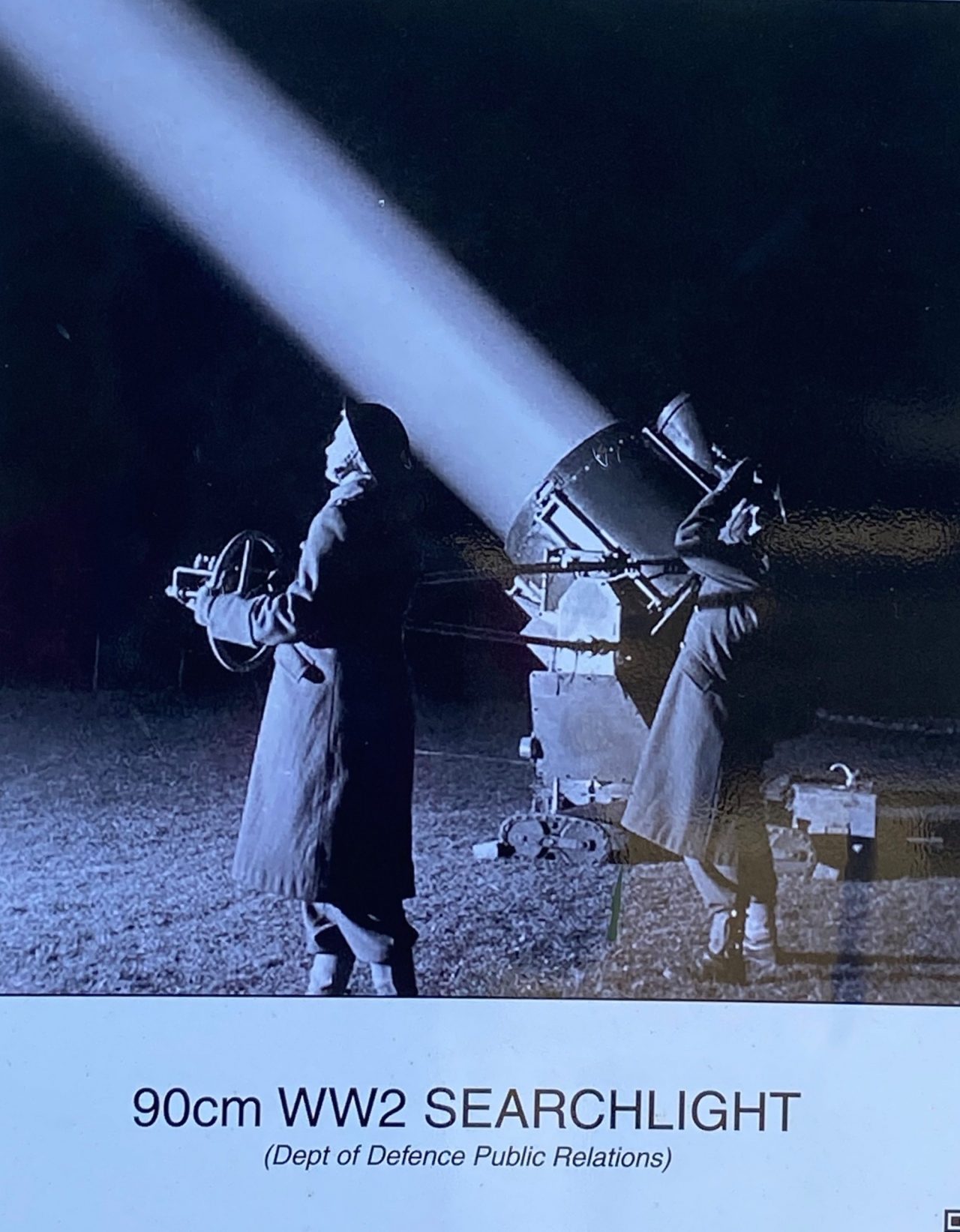 In 1944, more 5.25-inch dual role coastal artillery/anti-aircraft batteries were installed at Leighton, as well as at South Fremantle and Point Peron, other locations in Fortress Fremantle.

However, the guns were never fired at enemy ships or aircraft. It was believed that the Fremantle Fortress with gun stations dotted around the coast and on Rottnest Island was a powerful deterrent to the enemy.

Following the end of WW2 in 1945, the Buckland Hill battery was maintained for several years. In the 1960’s, SAS personnel trained in the tunnels for combat in Vietnam. The walls are peppered by gunshot. In 1979, the Army returned the battery to the State Government, who subsequently sold much of the surrounding land for housing.

The battery is now open to visitors every Sunday and has guided tours from 10am to 3pm. 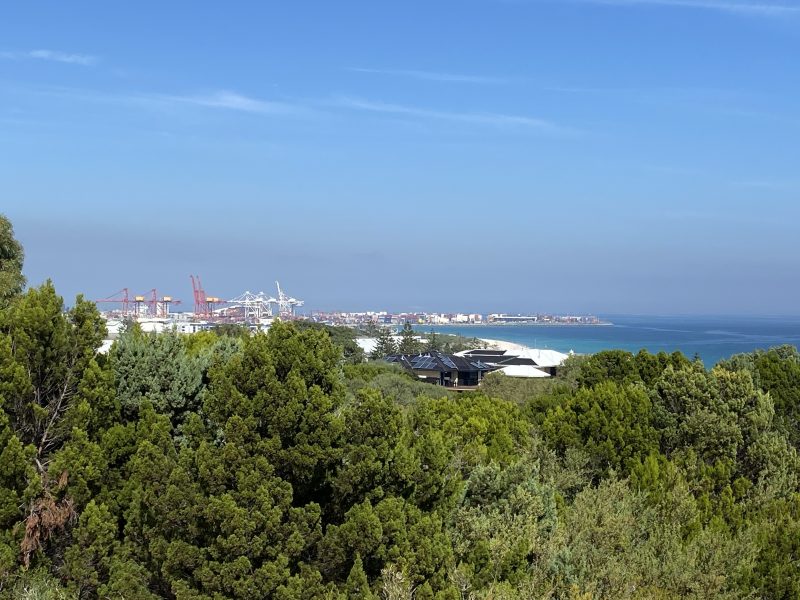 I love the panoramic ocean views from the Leighton Battery lookout. On ANZAC Day, the ocean was calm as a millpond while a few ships languished in Gage Roads. There was no gunfire – just the chirping of birds in the undergrowth and trees.