Welcome to lower Silver Street, one of the most attractive leafy corners in South Fremantle.
When Michael (Barker, the Shipping News’ Editor) invited me to write something about our South Fremantle precinct I accepted enthusiastically and started making notes as I mentally scanned the last 20 years of owning the Silver Street Studio and the little limestone cottage which fronts onto Coral Street.
We moved here from the Perth Hills and embraced the antithesis of ‘bush block’ living. We’ve grown to love the neighbourhood, our coastal lifestyle and the South Freo sense of community and diversity. I feel fortunate to be living in this part of the world, not least of all in Fremantle; more particularly South Fremantle and quite specifically this pocket of town where we not only feel ‘at home’ but have grown to experience and love a real sense of place and belonging.
We enjoy the idyllic location; being equidistant from South Beach and the centre of town, we are just a stone’s throw from South Fremantle’s, now famous, culinary hub. What could be better? However, in these strange times of COVID 19 when many of us are self-reflecting, self-isolating and/or socially distancing to the prescribed length of a bicycle, we need, even more, to feel part of a supportive community and we have certainly found that to be true here. 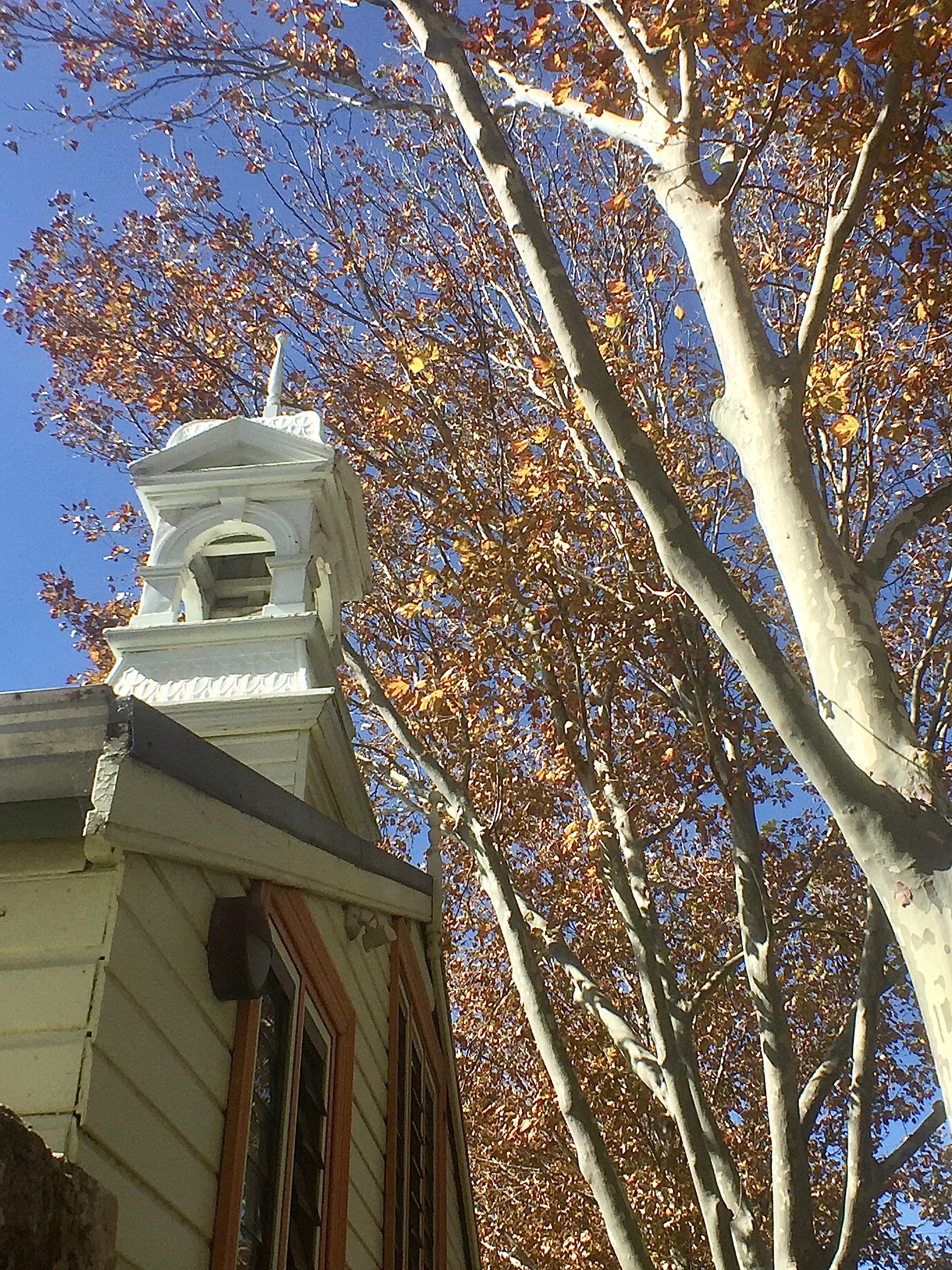 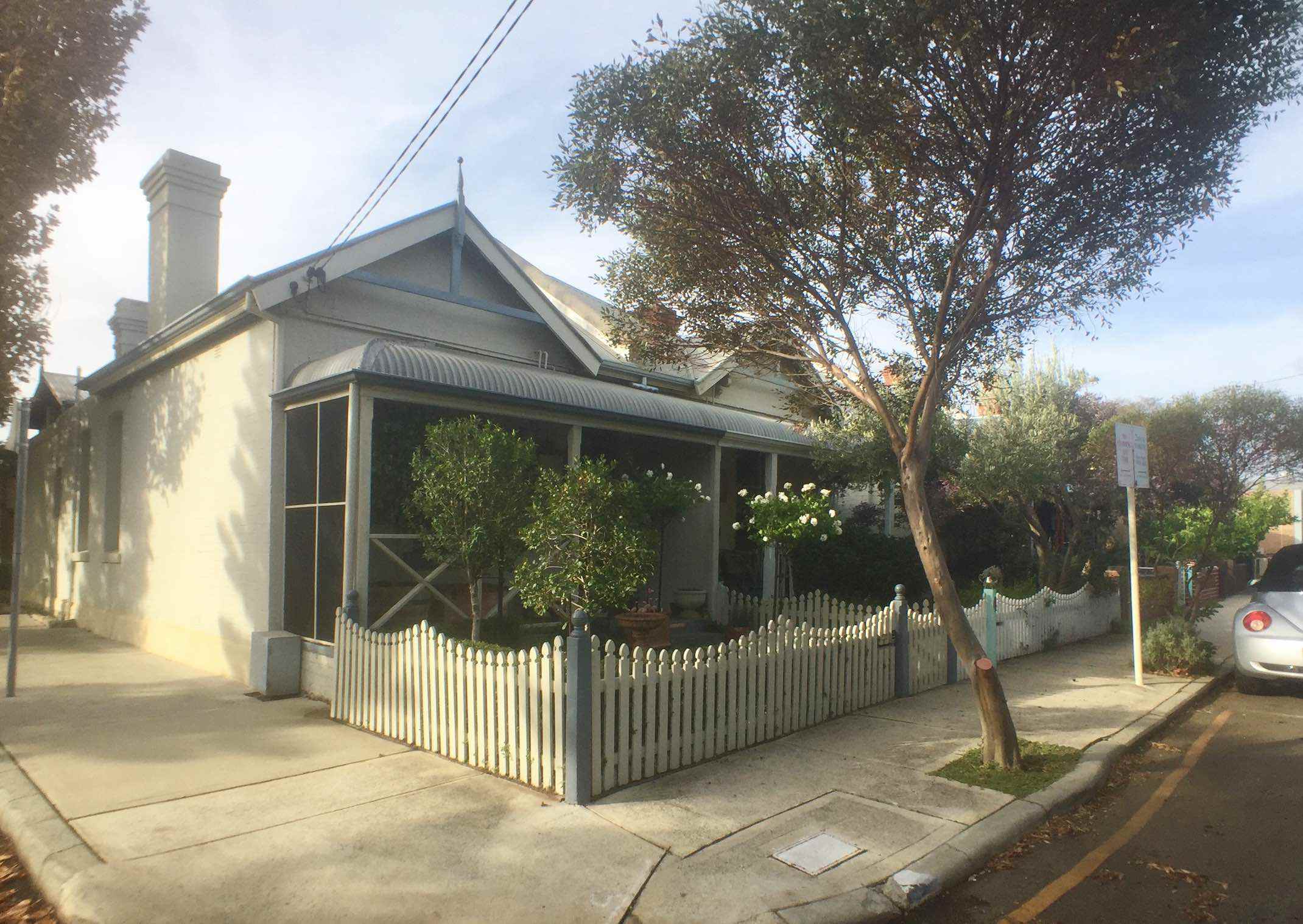 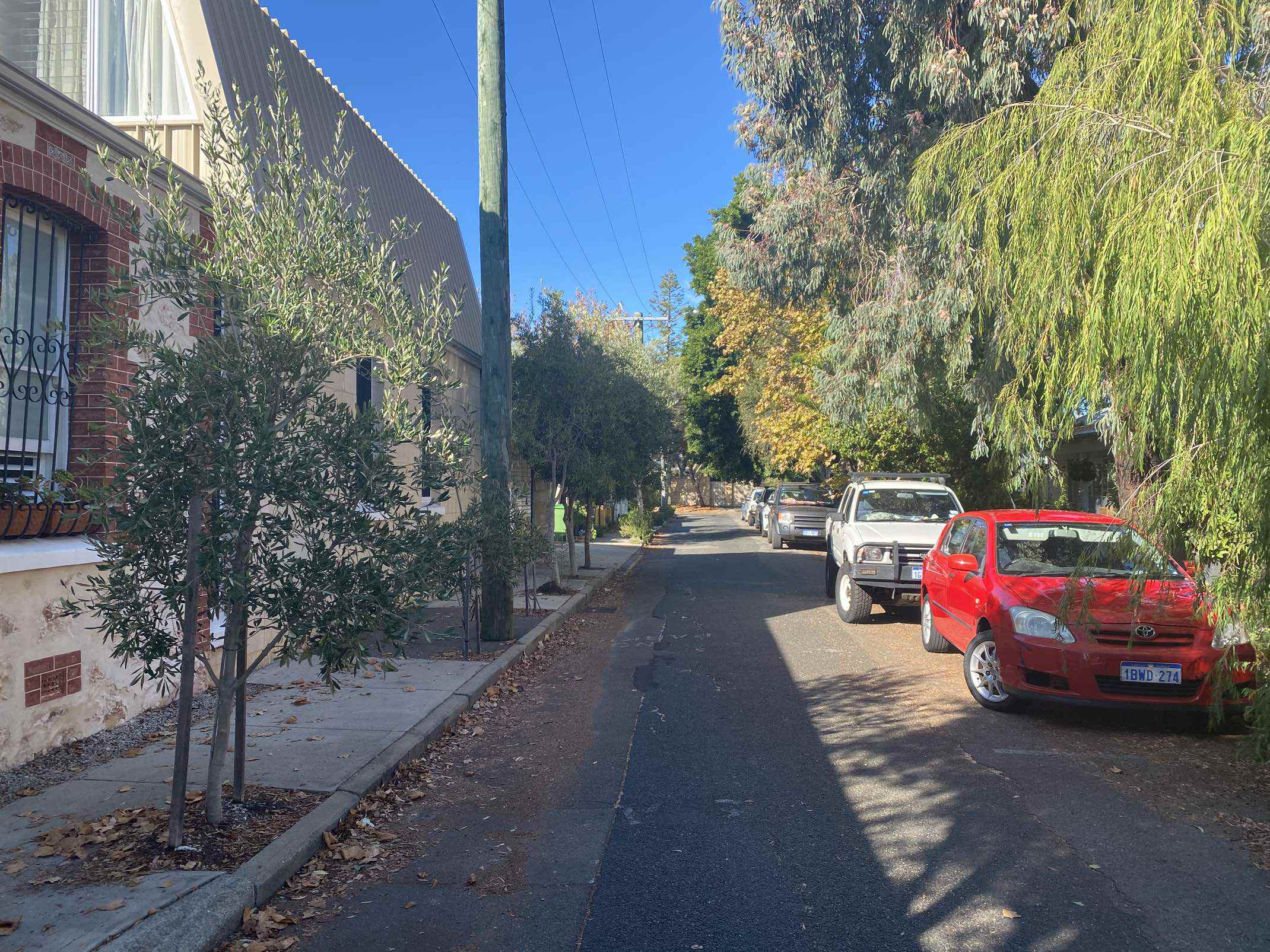 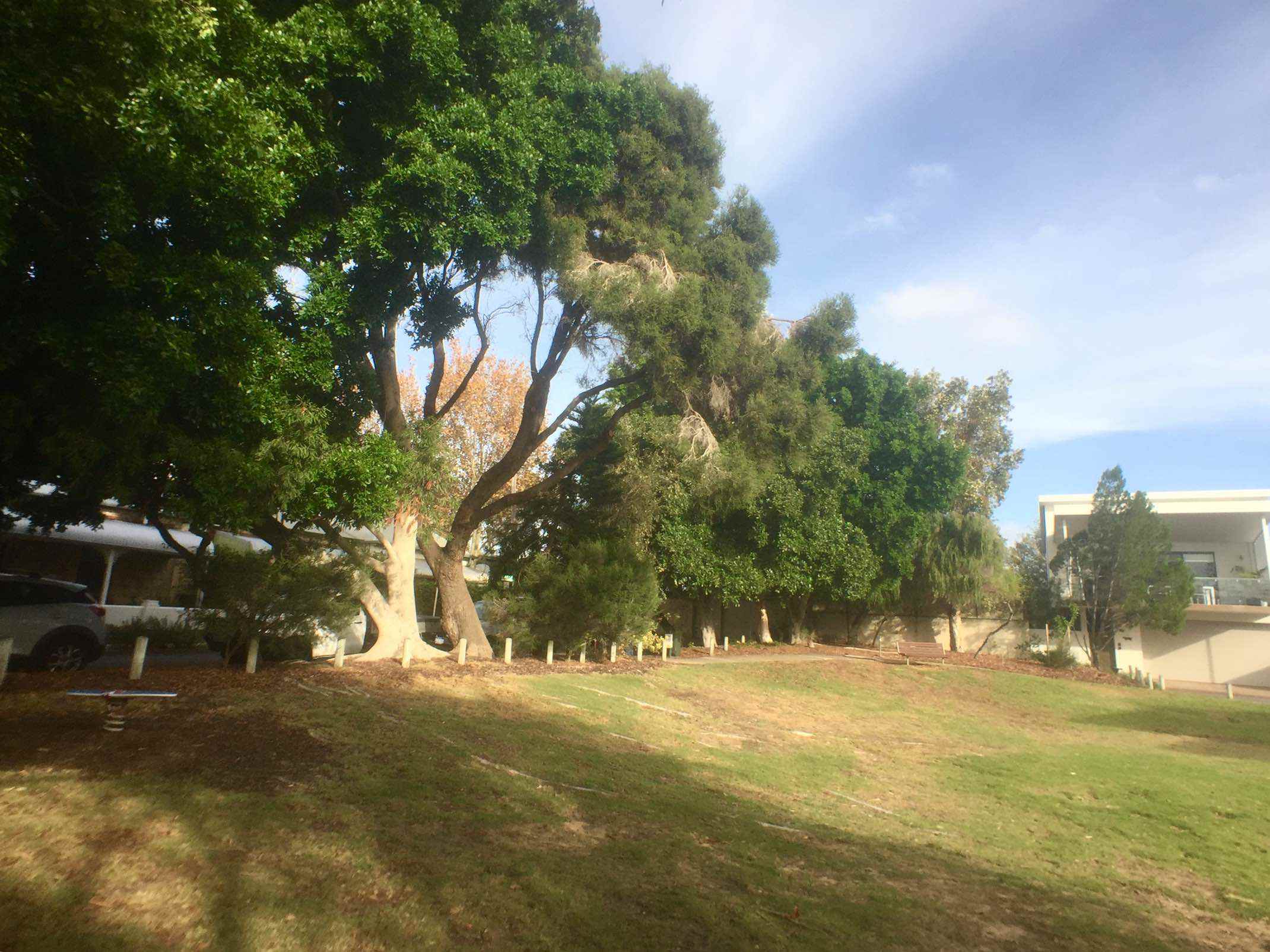 Ten years before we actually bought the property, I visited the Silver Street Studio a couple of times, that is, when the house and studios were ‘open’ providing a rustic gallery space for the creative works of Robin and Jo Reid. I was instantly drawn to the wonderful ambience which they had created, not least of all the garden which was quite enchanting. Robin, a sculptor, attended a Benedictine Abbey school in England and Jo was a ceramicist and keen gardener. Together they combined their skills and influences to create a unique environment which they shared with many. The architecture instantly appealed to my own creative spark and upbringing in Europe. Over the years, we too have added to the eclectic Studio story.
One Perth event, in 1987, which stands out in my mind and very much relates to the Silver Street Studio is the Love a Duck exhibition which was held in the Undercroft Gallery at UWA. The show was instigated by Robin Reid to encourage funds and enthusiasm for a new gallery at UWA. As I remember, Robin carved many ducks from palm fronds, in the Studio itself, and a number of leading Perth artists were invited to paint them before they went ‘under the hammer’. In fact, I cast thirty ceramic eggs for one of the participants!
It was also the year that the America’s Cup was held, and lost, in Fremantle. Everything was abuzz. Fortunately, the Port City of Fremantle had missed the devastation of the early 80s inflicted on Perth and more sensitive renovations were coming into play.
At this time, our old limestone cottage on Coral Street was being extended creatively to become the Reid family home. The Studio was also built in the early 1980s, to look old, yet full of character in a rustic architectural style. This building has its own entrance onto the Silver Street Laneway and sits behind the last two cottages, 8 and 10 Coral Street. The large downstairs studio space was Robin’s sculpture workshop whilst the upstairs floor provided a ceramic studio for Jo complete with outside kiln room. Both the cottage extension and studio complex display an eclectic architectural melange of significant recycled memorabilia which became a quintessentially ‘Fremantle’ style leading up to the America’s Cup, and beyond. Old bridge and wharf timbers, heavy beams from the Fremantle wool stores, limestone blocks from an old church in town and one of the four turrets from the old Swanbourne hospital are just some of the many features preserved in this South Fremantle icon. The main Studio entrance is a massive wooden gate which supports a small ‘hobbit’ door perhaps reminiscent of those doors within doors often found in European medieval cities. A large wooden archway also crosses the laneway as if heralding the entrance to an otherworldly domain. 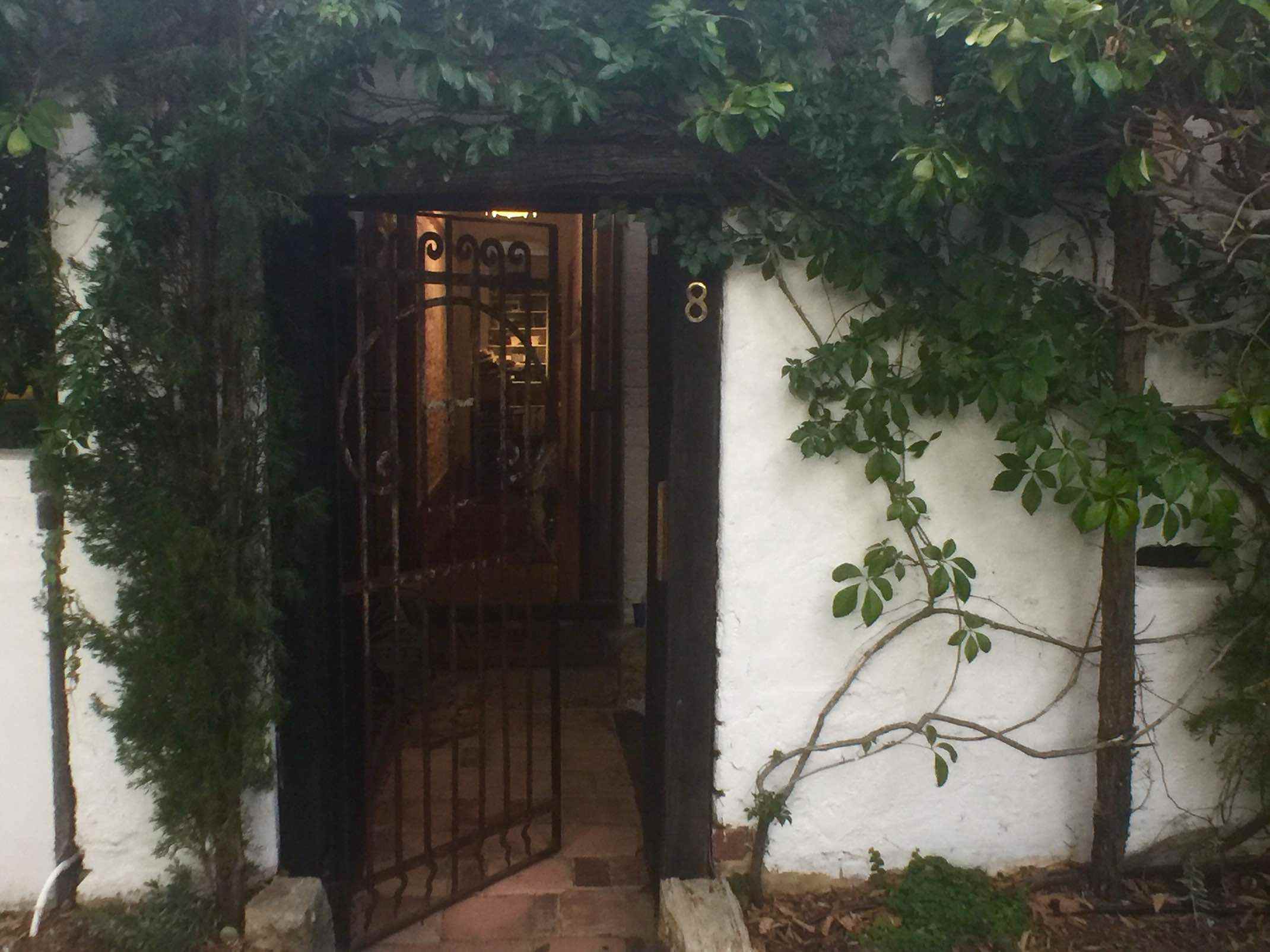 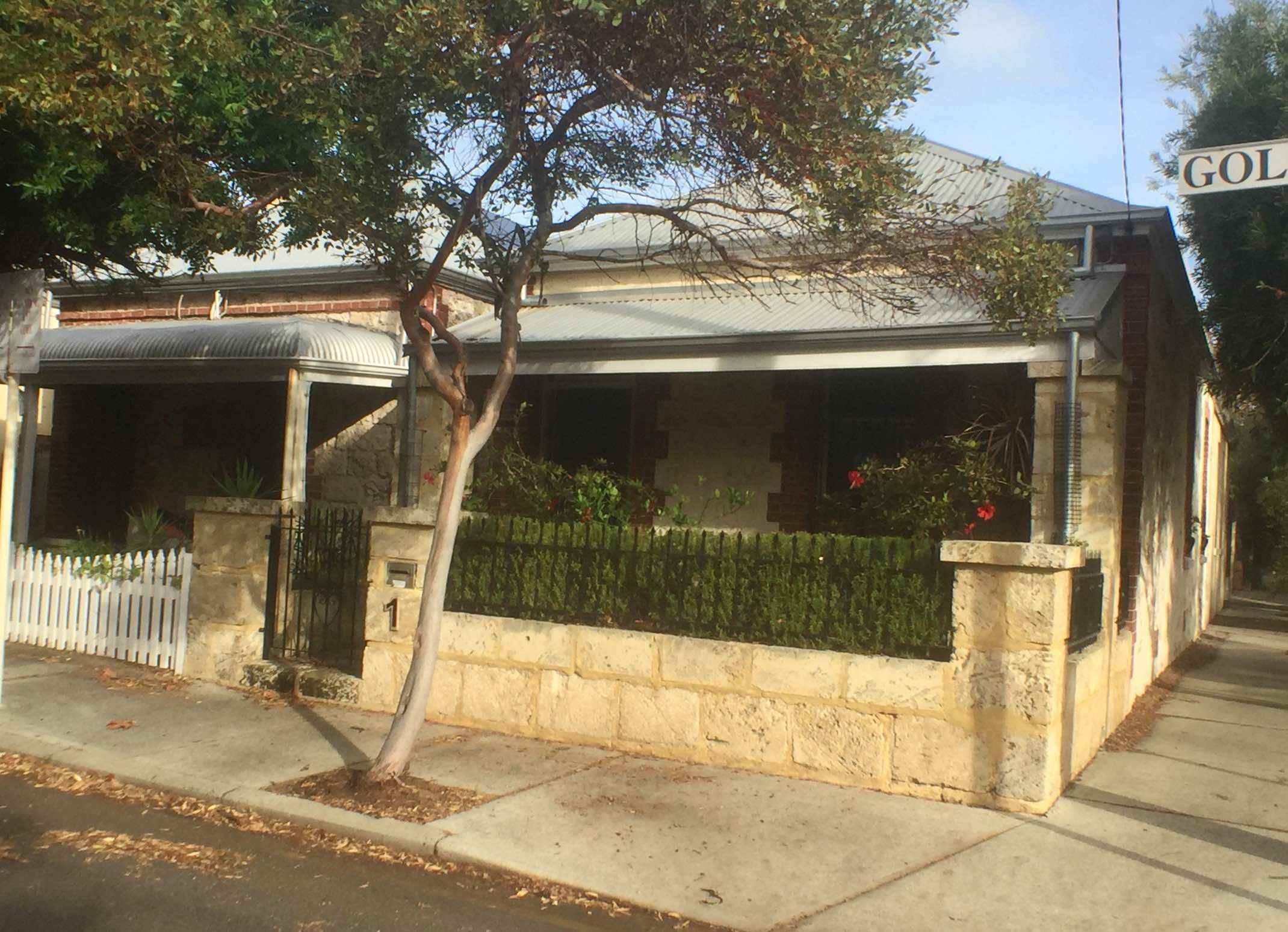 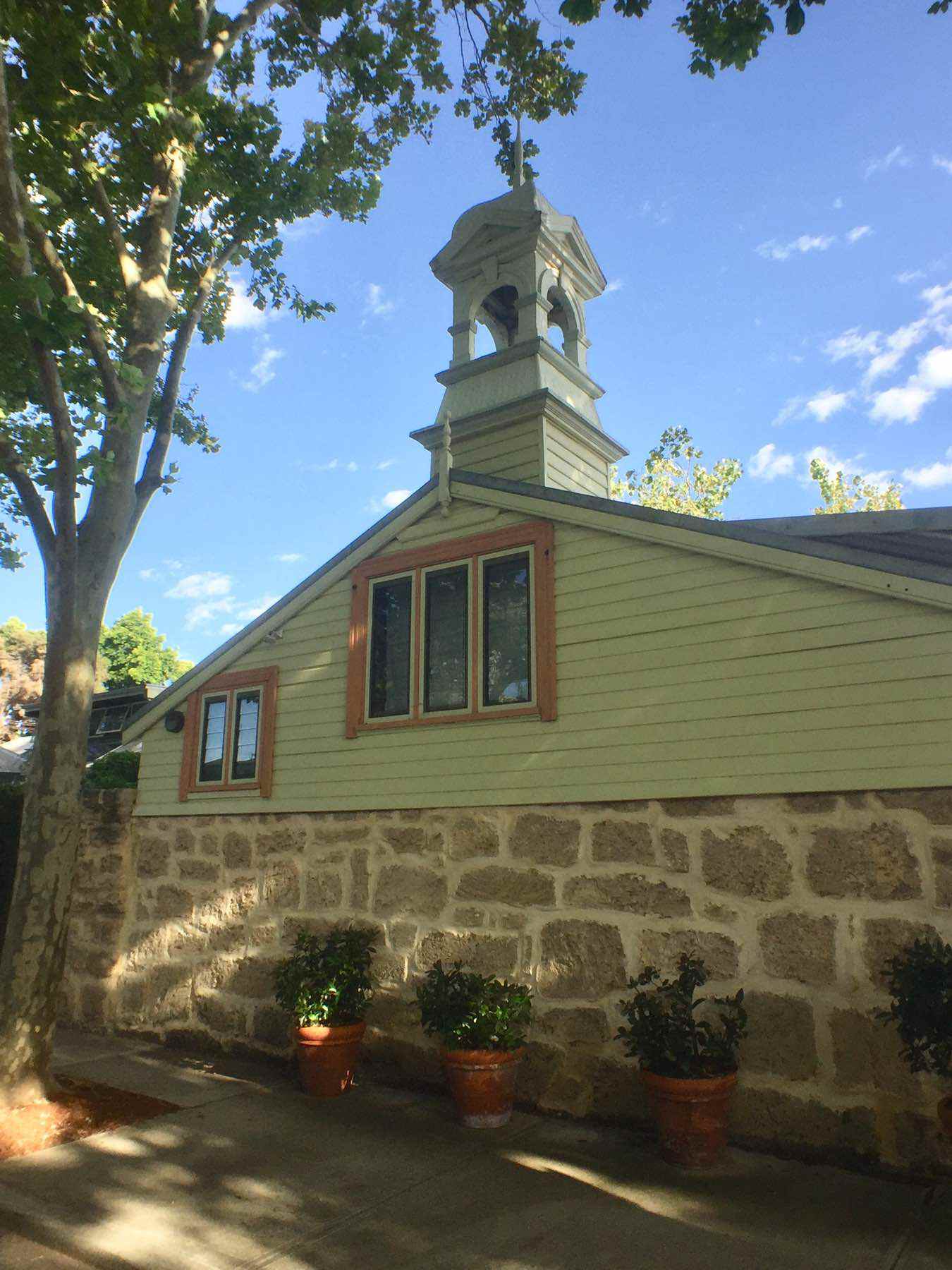 Silver Street itself is magical and holds special appeal for locals and visitors alike. Robin Reid, Bryn Davies, who owned and renovated 10 Coral Street, and friends, generously planted the beautiful plane trees and other species some forty years ago. Now, the trees tower above us as we stroll to Ootong for our coffee and Abhi’s for our croissant. Their huge leaves remind us of the season’s change providing light in winter and wonderful shade during the hot summer months. In spring, we wake to a cacophony of bird song and can even see the ‘pecking order’ of our avian friends above, note their nesting patterns and watch their young learn to fly. It is autumn now. The trees are swaying in the wind and the leaves are falling.
In the summer months the street is often used as a photo back drop for young couples, small family groups and all things creative. One of our neighbours was married in the street a few years ago which was a very special moment in the community. 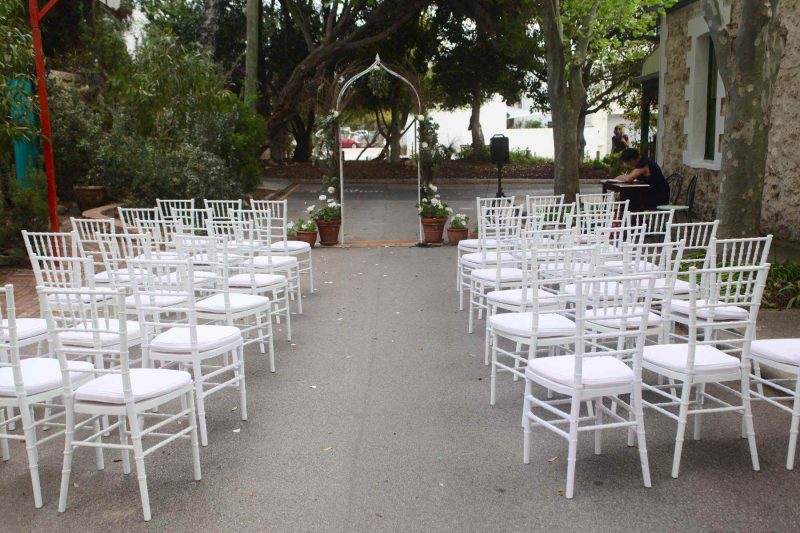 The heritage cottages on Coral Street, built in about 1901, were originally three of five identical houses. It is hard to imagine life before the land reclamation of the 1900s when these worker’s cottages were sitting on the shoreline overlooking the beach. It feels so apt that at one stage our cottage was owned by a boatbuilder and another by Correia Fishing Company.
In the 50s or 60s, the five cottages were purchased for the expected expansion of Tolcon’s Bakery. Subsequently, Numbers 2 and 4 were demolished for the baker’s vans access and the remaining three buildings were allowed to badly deteriorate as the development plans stalled. However, the bakery finally closed, without any advancement, thus saving the three remaining cottages from demolition. Cottages 2 and 4 were subsequently rebuilt in the mid 1980s. They were designed by local architect Brian Klopper.

DONATE NOW
When we initially bought the Studio and Cottage in the late 1990s, just facing our front door, on Coral Street, was a newish holiday resort for the employees of a Japanese company. Pristine lawns ‘nestled’ privately behind a high limestone wall. It all sounds a bit surreal now as I write this but, in fact, the facility was rarely used and didn’t last long. About 14 years ago, plans were underway for the new development. This became a huge community focus for those on Louisa, Silver, Coral and Gold Streets. Everybody wanted to know what this change would bring and what the visual impact would be on ‘our’ little heritage precinct. Gatherings were held, minutes were taken and council meetings were attended regularly. It was certainly a good way of getting to know the neighbours, if nothing else!
In those days, street parties took place in the road and so a small public open space, as part of the new development, held special appeal for most. The park may not always have been there but now it is a constant; a meeting spot for chats, coffee, a glass of wine, exercise, a ball throwing area for the dog, a play and tree climbing area for the young and of course a venue for the proverbial Park Party once a year. It provides a green link between the worker’s cottages on Coral Street and the new architecture on Wyola Lane. It is now a community space enjoyed and well used by many. 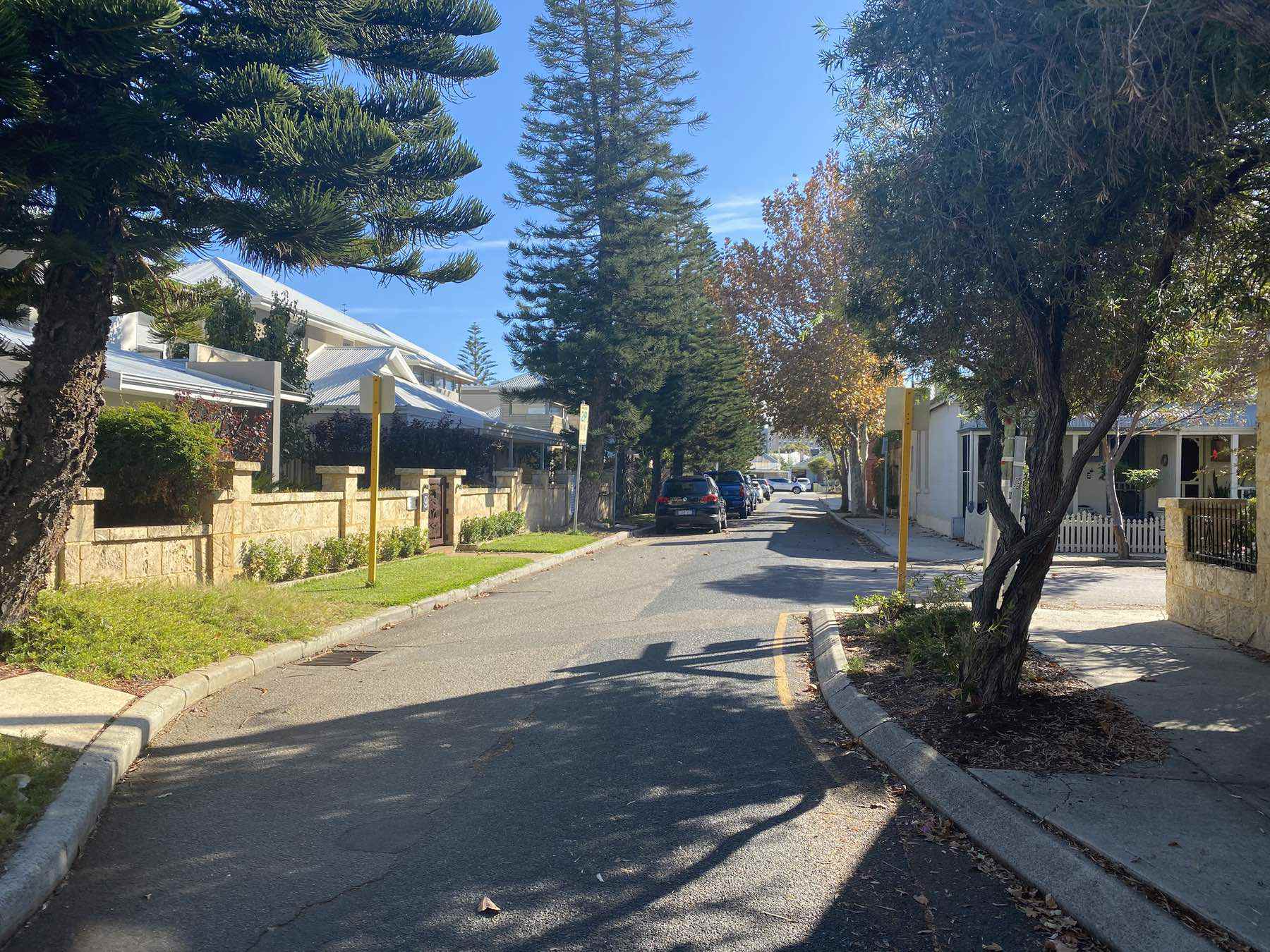 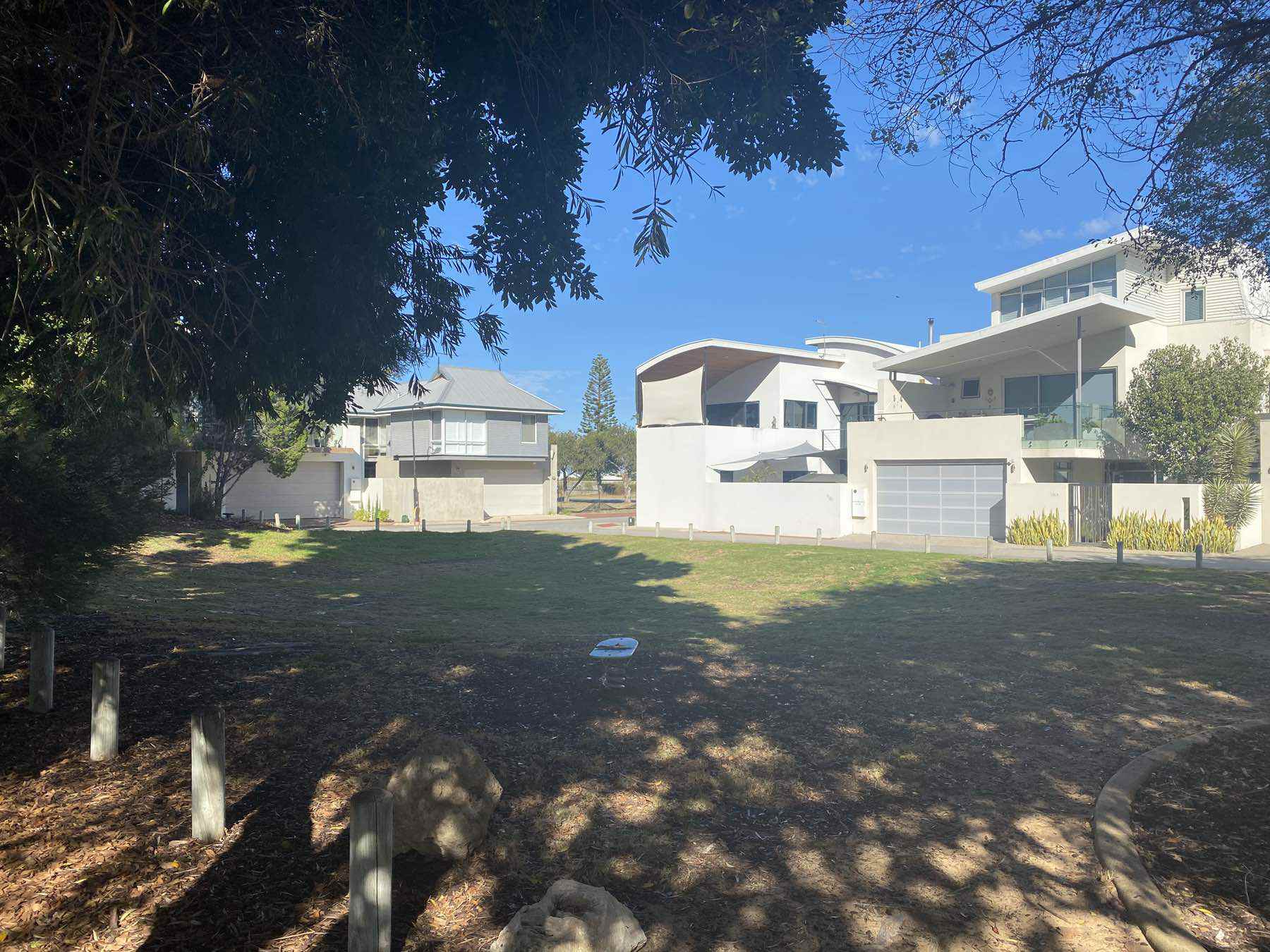 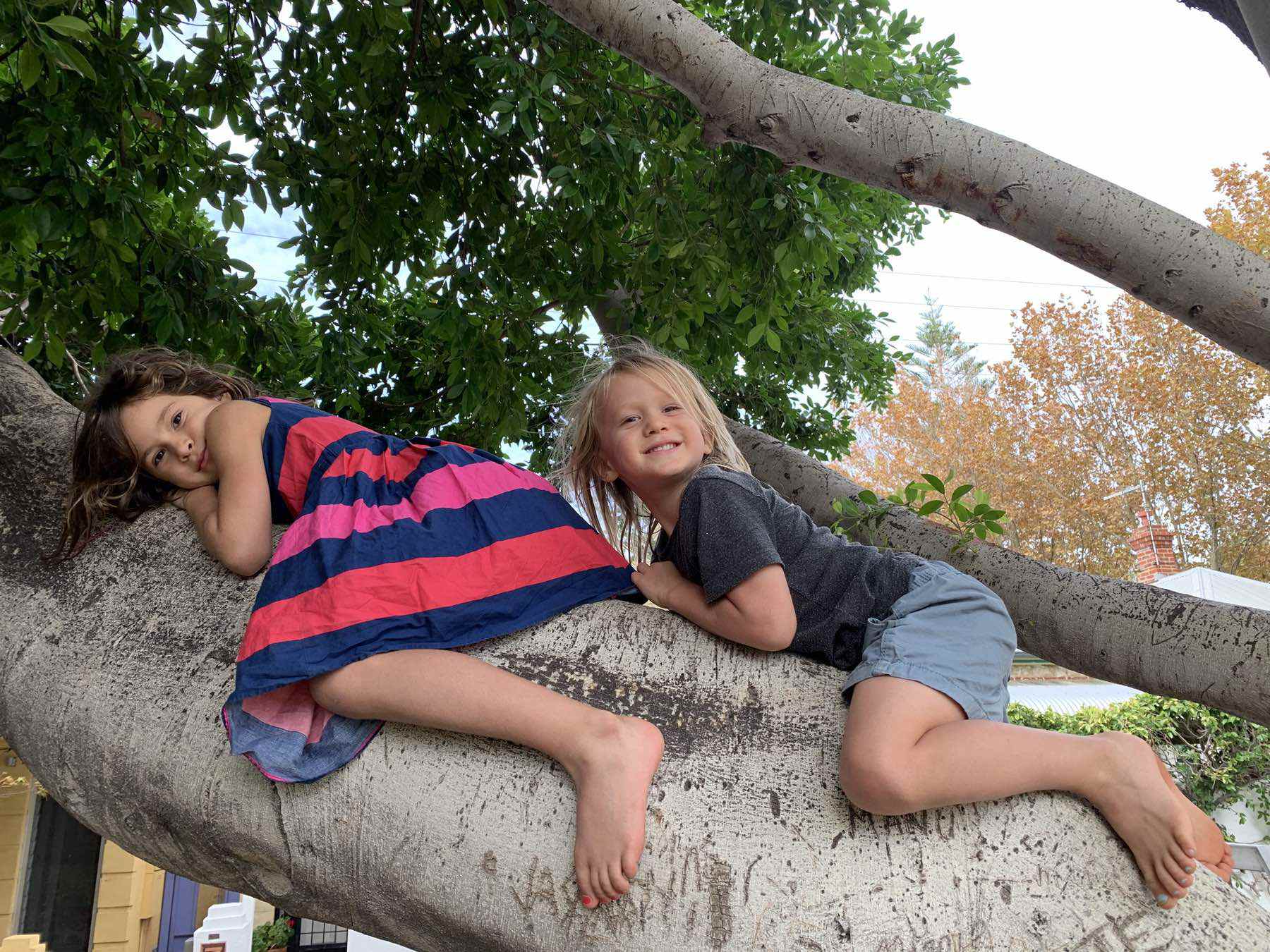 Our now direct access onto Marine Terrace leads to local South Beach. We also love our bike rides to Woodman Point and beyond as we follow the coastal heathlands. Veering to the right, we sometimes end up at Little Creatures for a beer followed by fish and chips at Fishing Boat Harbour or Bather’s Beach.
Situated between the ‘two terraces’, we are in an enviable position. We’re actually spoilt for choice. The lively stretch of South Terrace at the end of Silver Street offers cafés, bakeries, restaurants, food outlets, not to mention Yoga and meditation to feed the soul. An end of the day stroll can easily take you towards The Local Hotel and/or to one of the excellent wine bars.
Today, as I write, many are just selling takeaways until we get through these COVID times. They will survive. I’ve just nipped out to Manna Whole Foods to get a few provisions. I carefully distanced my way around the isles. No new COVID ‘cases’ today in WA. Things are opening up.
This communal sense of ‘home’, which I mentioned at the beginning, encompasses all these experiences; the memories, interactions, get-togethers, walks, cycle rides, swims and conversations with those around us who create the meaning within ‘neighbourhood’ and for that I’m grateful. This weekend, Saturday night out is set for drinks in the road with a few of our Gold Street neighbours- ‘social distancing’, of course! 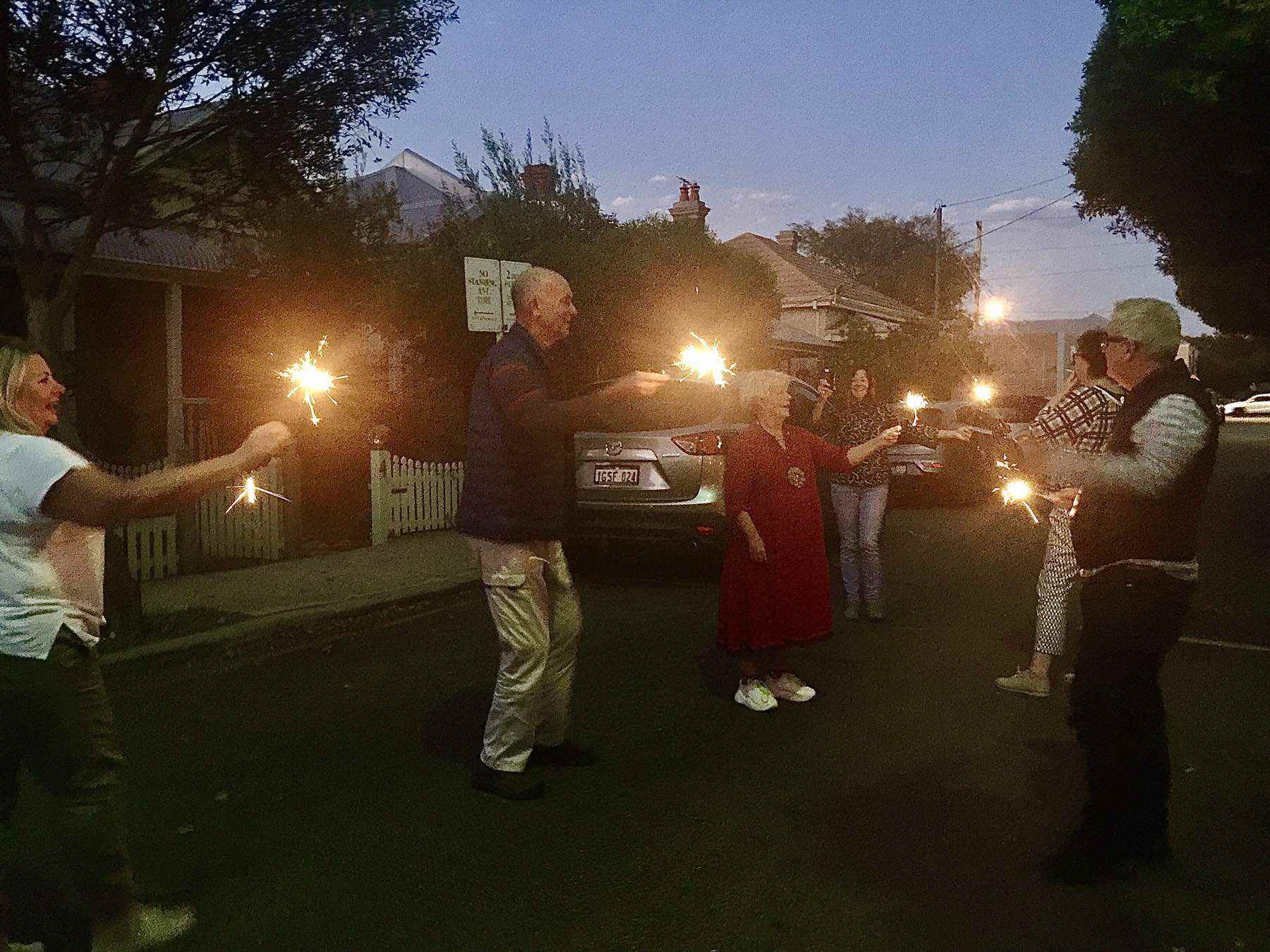 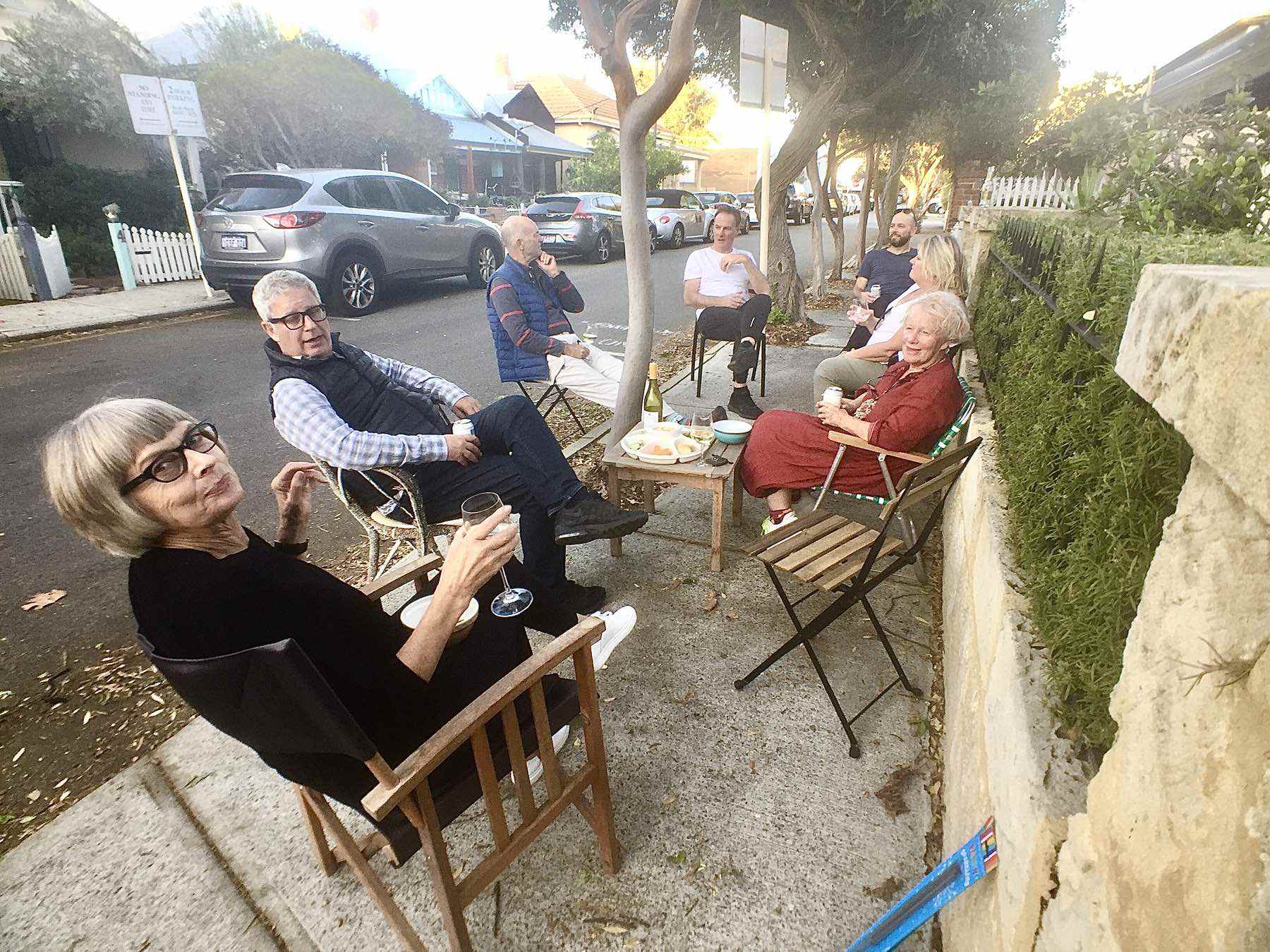